91mobiles.com
Home Mobiles Google Pixel 6a review: worth the premium?

In what feels like an eternity, Google has finally launched a new Pixel phone in India. The latest entrant – dubbed the Pixel 6a – replaces the ageing Pixel 4a (review) that was announced almost two years ago. Unsurprisingly, the smartphone has been on everyone’s lips as Pixel phones seemingly offer a stellar photography and software experience. The icing on the cake is that the Pixel 6a is powered by Google’s custom Tensor chip as well. So, should you drop Rs 43,999 on the phone or get behind a flagship killer from iQOO, Realme or OnePlus’ stables? Let’s find out.

The Pixel 6a takes its design cues from its pricier siblings and the smartphone looks like a miniaturised Pixel 6 Pro. That’s not a bad thing per se, as I quite like the styling of Google’s flagships. It also helps that the handset looks unlike any other device launched in the Indian market. The back of the phone, for instance, features a long strip or a ‘visor’ of sorts that houses the smartphone’s dual-camera array. The camera module protrudes evenly across the width of the phone too, thereby ensuring the handset doesn’t wobble on a flat surface. That’s not all, as the smartphone’s rounded-off, metallic frame offers a superb grip, and the device tips the scales at just 178 grams as well. Suffice it to say, the Pixel 6a feels extremely comfortable to use day in and day out and I rarely felt any wrist fatigue set in whilst daily driving the set. 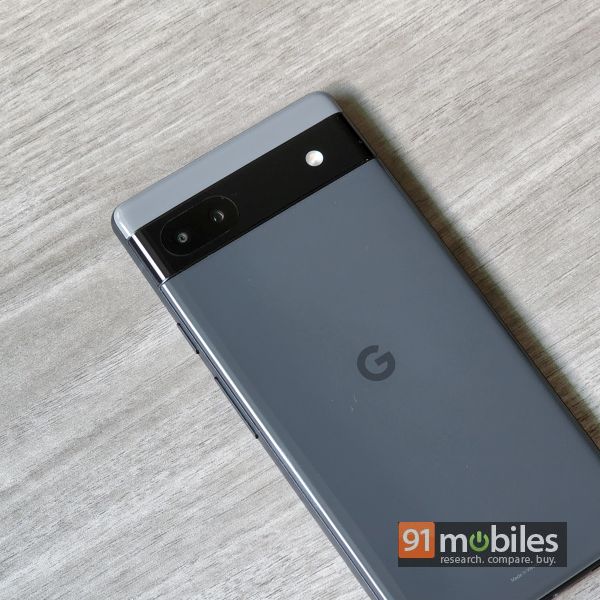 Now, as much as I liked the design of the phone, I wish the company would’ve paid more heed to the unit’s colourways. As things stand, you can snag the Pixel 6a in a Charcoal black or Chalk white hue. I was sent the former for review and needless to say, the glossy finish smudges quite easily. What’s more, some folks might find the colour scheme a bit too dull as well. To rub salt into the wounds, the smartphone ships with a plastic back, which might not bode well with buyers looking to splurge upwards of Rs 40K on a new phone. On the bright side, the device comes with IP67 certification, which is somewhat of a rarity in its price segment. Consequently, you can use the phone in a shower, or near a pool without worrying about damaging the device’s innards. I should also point out that the phone offers extremely tight haptics and you’ll revel typing long messages on the set. 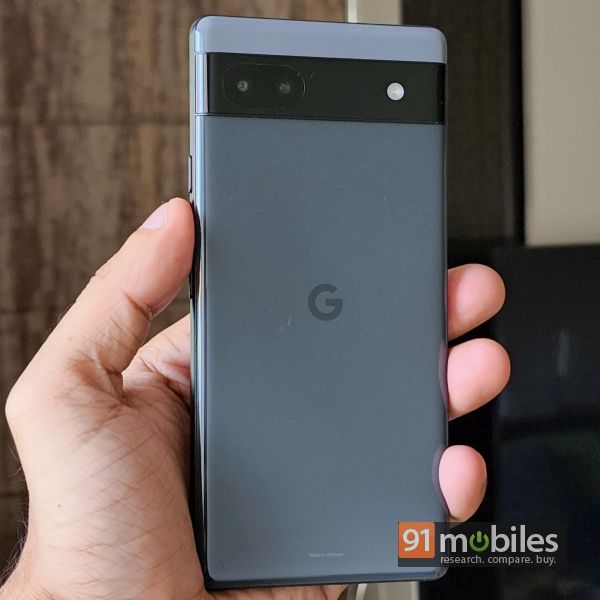 Moving on, the handset ships with a USB Type-C port at the bottom, which is flanked on either side by a speaker grill. The volume rocker, as well as the power button, can be found on the phone’s right-hand spine. As for biometrics, the device doesn’t come with facial recognition smarts, however, touts an in-display fingerprint sensor which works well, for the most part. We did report that the sensor was seemingly unlocking the device with unregistered fingerprints as well. However, at the time of writing this review, the unit is working as advertised. 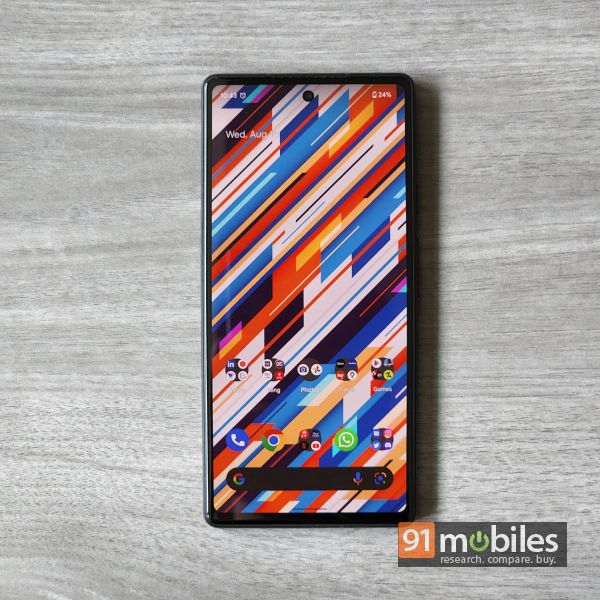 Display-wise, the Pixel 6a is equipped with a 6.1-inch, FHD+, OLED panel. The screen comes layered with Corning’s Gorilla Glass v3 on top, which should keep scratches and dings at bay. Furthermore, the display gets adequately bright too and I could comfortably use the phone when I was out and about under Delhi’s harsh sun. That’s not all, as the device can even relay HDR media from OTT services like Netflix. On the flip side, the display could’ve benefitted from sleeker bezels. More notably, the panel refreshes at just 60Hz and consequently, you won’t be able to bask in smooth, fluid animations and UI transitions. That’s quite disappointing, given how most, if not all premium Android phones feature an HRR screen. So, you best keep your expectations in check if you are migrating from a phone that comes with a 90Hz or 120Hz screen to the Google Pixel 6a. 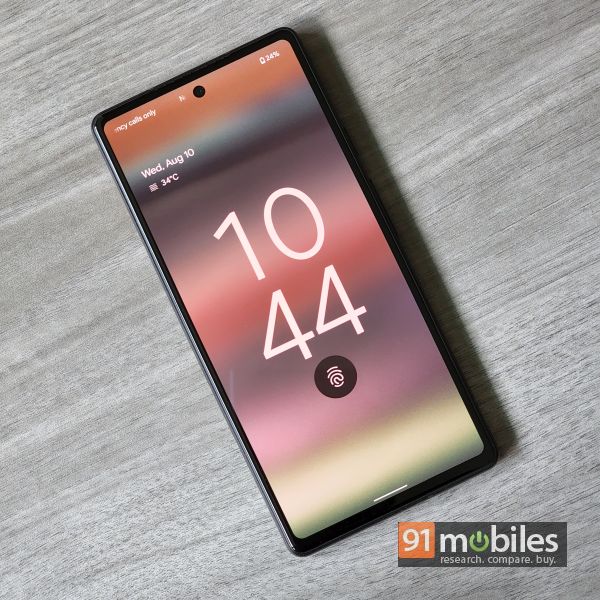 As prefaced previously, the Google Pixel 6a is backed by the company’s Tensor chip which works alongside UFS 3.1 storage and speedy LPDDR5 memory. Now, I have already spoken in length about the SoC’s performance chops, which you can read about here. But, to get you up to speed, Google’s Tensor platform is no slouch and the SoC can easily crunch through a user’s routine workload comprising running multiple apps in tandem, browsing the web, and the works. That said, the processor felt a notch below Qualcomm’s 8-series SoCs and the new MediaTek Dimensity chipsets (Dimensity 8100, to be precise). 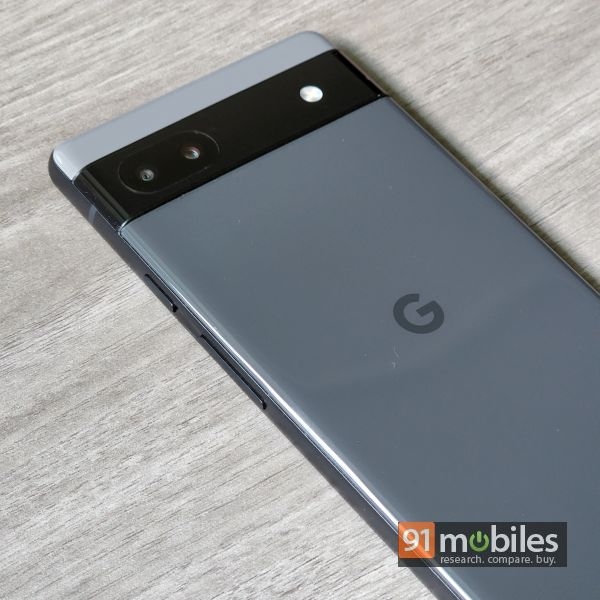 To wit, the SoC throttles quite a bit, which can be accredited, at least in parts, to the Pixel 6a’s relatively sleek chassis. Be that as it may, I noticed quite a few stutters when running graphically-demanding games on the set. So much so, the Snapdragon 778G Plus-backed Nothing Phone (1) (review) managed to overturn higher average FPS in Apex Legends Mobile too. Rest assured, while the Pixel 6a is a capable daily driver, the handset will undoubtedly leave gamers wanting more horsepower and stability under the hood. As for software, the device comes with Android 12 out of the box. 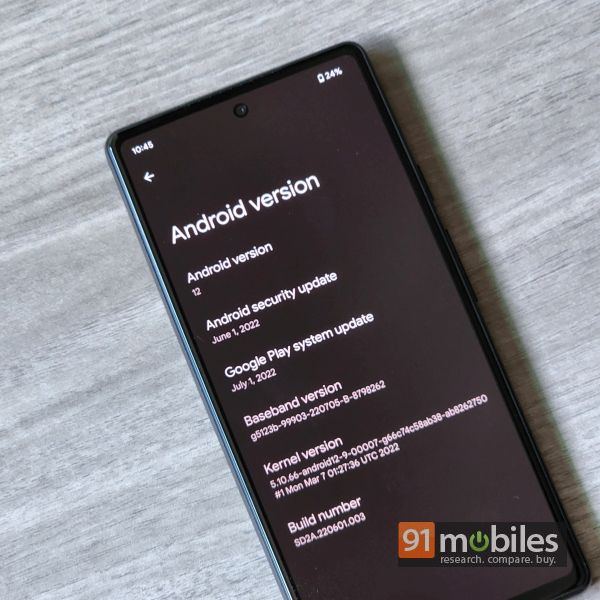 Unsurprisingly, the Pixel 6a boots a stock version of Android and as such, you won’t find a ton of customisability features here. To the phone’s credit, the device does allow users to tweak the grid size and change the accent colours on the status bar. However, you’ll have to use a third-party launcher or opt for an app like Awesome Icons (which allows users to remap each icon individually) to make the most of your icon pack collection on the phone. That’s not all, as I am not the biggest fan of the quick action settings menu on phones running a vanilla version of Android 12. In particular, I dislike how all of a phone’s internet settings comprising toggles for Wi-Fi and LTE connectivity are clubbed under the same roof. 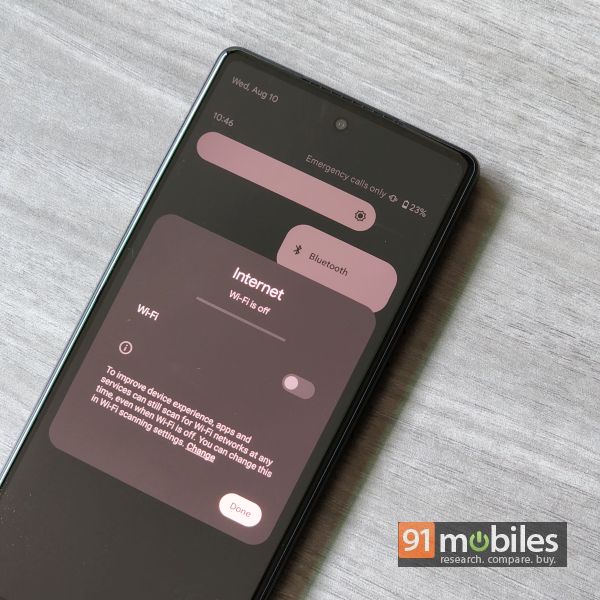 As a result, I have to tap multiple times to enable or disable the phone’s Wi-Fi or choose a different network, which gets tedious, to say the least. On the upside, the smartphone ships with no bloatware. Moreover, buyers opting for the phone will also be able to leverage a host of Google utilities, including Live Translate, Now Playing and Magic Eraser, which can do wonders for your snaps as it allows users to remove unwanted elements from an otherwise picturesque scene. 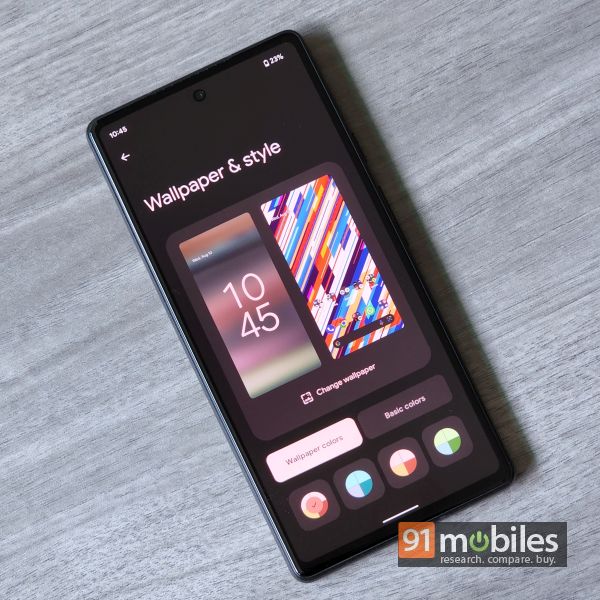 The Pixel 6a is fuelled by a 4,410mAh cell which, with moderate usage, can last you until bedtime. During my stint with the phone, I was averaging around five hours of screen-on-time with my usage comprising browsing various social media platforms, clicking photos, listening to music and taking a couple of calls. Unfortunately, the device doesn’t ship with a charger in the box. Making matters worse, the handset’s charging speeds top out at 18W and as such, you’ll have to stay tethered to a wall outlet much longer than say, if you were using a OnePlus or Realme phone. 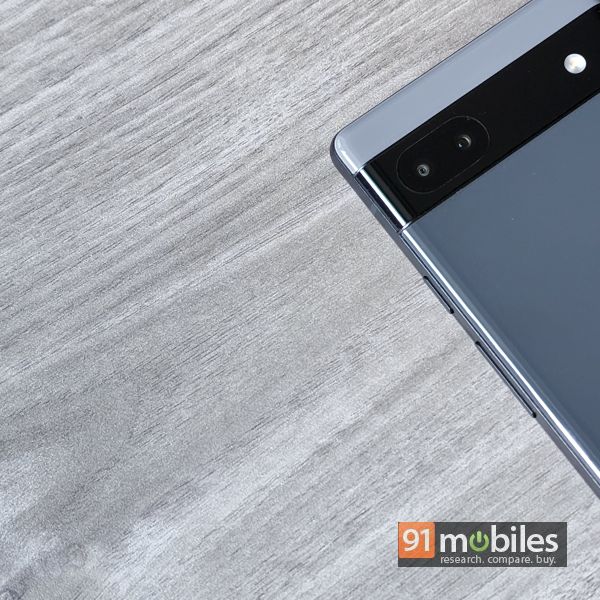 I’m sure you’re expecting the phone to right all wrongs in the camera department. Well, you might want to sit down for this one. While the Pixel 6a ships with a capable camera stack that, thanks to Google’s excellent computational photography smarts, click gorgeous photos, the truth of the matter is that the competition has finally caught up. The handset no longer has an edge over similarly-priced devices and many times, the device’s ageing 12.2MP main sensor outputted slightly inferior images with lesser sharpness around the edges of the composition. The unit’s 8MP selfie shooter tackles dynamic range well, however, mucks up the facial details if you zoom into the stills. At night, the Pixel 6a’s images offer more noise than competing pixel-binned shots from say, the Nothing Phone (1) or the OnePlus 10R (review) too.

Don’t get me wrong, the smartphone is still a capable camera phone and the device clicks excellent portraits of human subjects. Furthermore, the handset overturns HDR-ified images that will complement anyone’s Instagram feed. Even then, I noticed that the device would jazz up the colours in the frame a bit too much. I’ve highlighted the same in my in-depth camera comparison between the Nothing Phone (1) and the Pixel 6a, so do give it a read if you want a better understanding of the phone’s photography chops. Rest assured, the 6a offers a good photography experience albeit doesn’t stand out in the camera department like its predecessors.

The Pixel 6a retails for Rs 43,999 in India and for the price, the device gets a few things right. The smartphone offers a clean, no-fuss UI and looks the part of a premium product too. Moreover, Google’s Tensor chip – while not the quickest – is still snappy enough for most workloads and the 6a offers a snug fit in the hand too. On the flip side, the handset would’ve been better off with a high refresh rate display. Furthermore, the smartphone’s charging speeds are quite slow and while the smartphone’s camera performance is good, it is not impressive enough to give the device a clear edge over the competition. Rest assured, buyers looking for the fastest or the most feature-packed Android should look elsewhere. However, if you value a phone’s software and ergonomics above all else, then the Pixel 6a will not disappoint you.

4 reasons you should buy Google Pixel 6a at Rs 27,699 during upcoming Flipkart sale

Google Pixel 6a available at Rs 27,699 on Flipkart, its lowest price in India: how you can get the deal