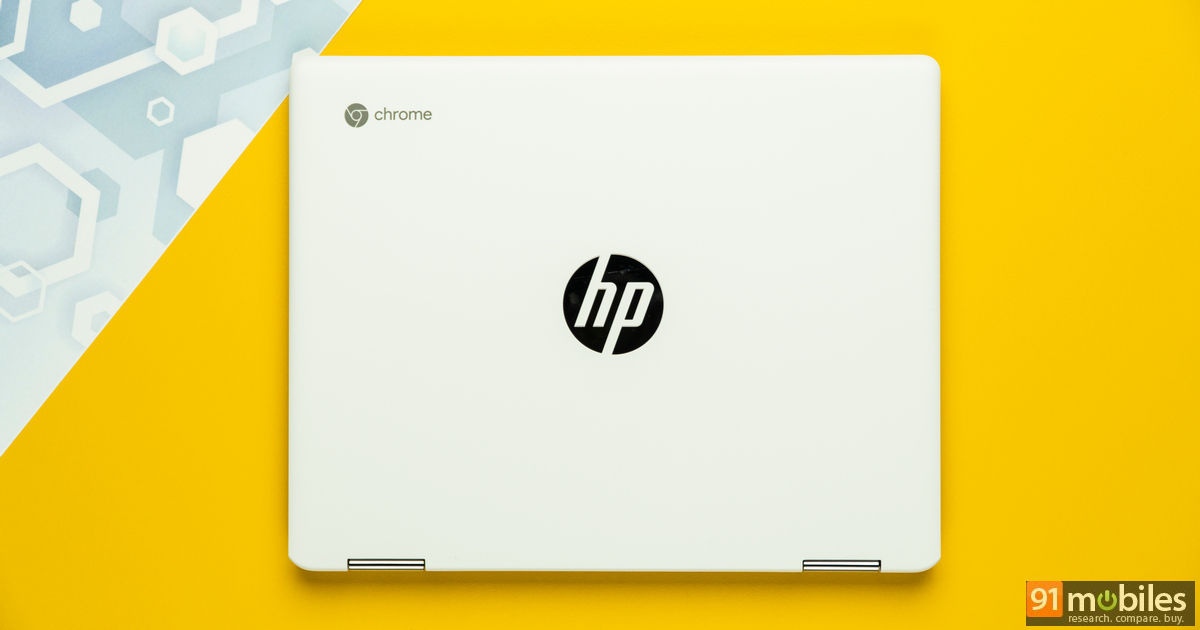 “If style and portability matter to you, the HP Chromebook x360 12b is worth a look”

Chromebooks can be considered niche products if you talk in the context of the Indian market. There are a few things that these machines are marketed for: mobility, long battery life and the ability to use Android apps on a laptop. Over the past year, HP has been going about its way to cement its position as the Chromebook king in the country. The Chromebook x360 and the budget-grade Chromebook 14 were considered worthy challengers to offerings from Lenovo, ASUS, and even Google’s Pixel Slate. Late last year, HP announced the Celeron version of the Chromebook x360 and also a smaller, 12-inch version of the same, the latter of which we have for review. 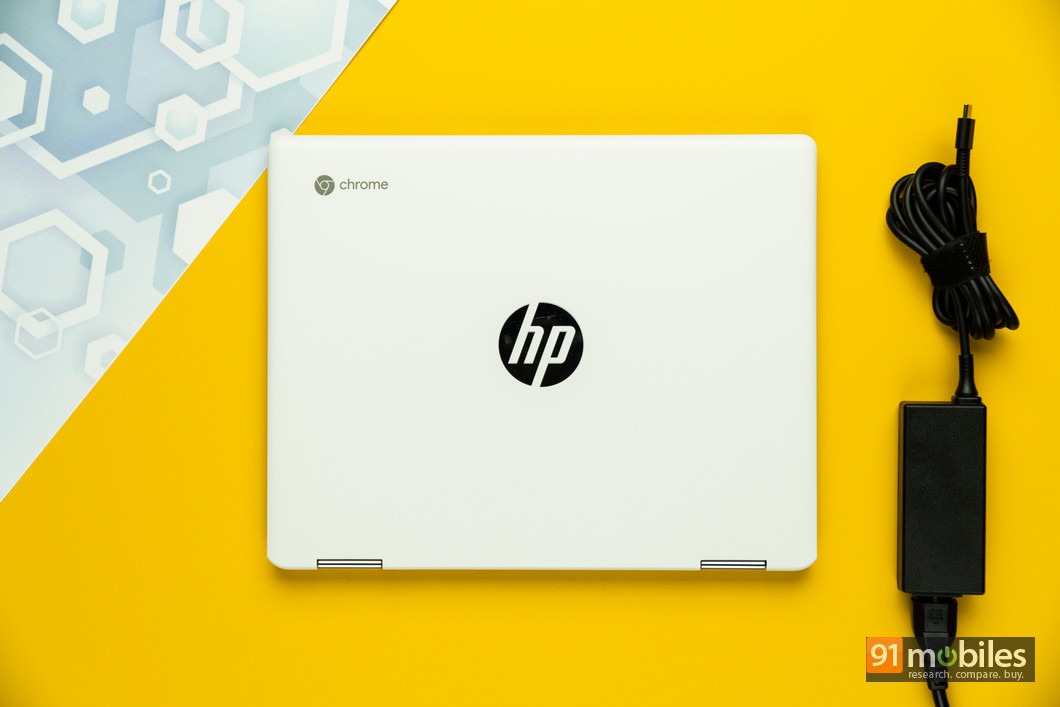 It’s clear that this device has been designed with productivity, and not performance in mind. The battery on the device is fantastic, it can be charged via a USB-C port, it has a 360-degree hinge, a touchscreen display and more. Also, it is extremely light and portable. However, it would appear that this new incremental update to HP’s Chromebook may not be the deal you really want unless you have a flashy and portable device on your mind. Read on to find out why. 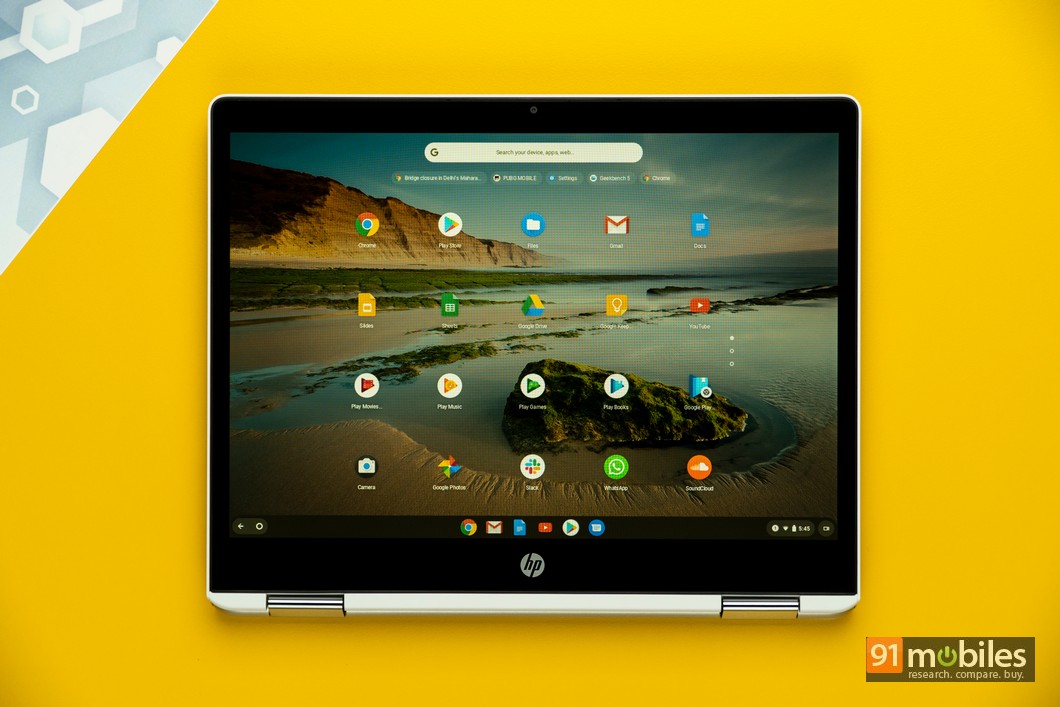 For any normal user, with the needs of typing out documents on the go or needing a seamless connection between their Android phone and laptop, the Chromebook x360 12b is an ideal companion. However, before shelling out near Rs 30,000 on the device, you might want to consider the cheaper Chromebook 14 or the previous-gen Chromebook x360 which is much more processing-centric.

The Chromebook x360 12b has a minimalistic design that complements the type of work one is expected to do on this device. The all-metal unibody finish does lend a touch of premiumness to the laptop which is disproportionate with the price. The small portable form factor of the HP Chromebook means that it fits very easily in a backpack. Even with the aluminum build, the Chromebook x360 12b weighs a little over a kilo, which makes it easy to operate. Opening the lid is, however, a two-hand job. Overall the build quality looks solid on the device, which is something you cannot say about a lot of other Chromebooks. 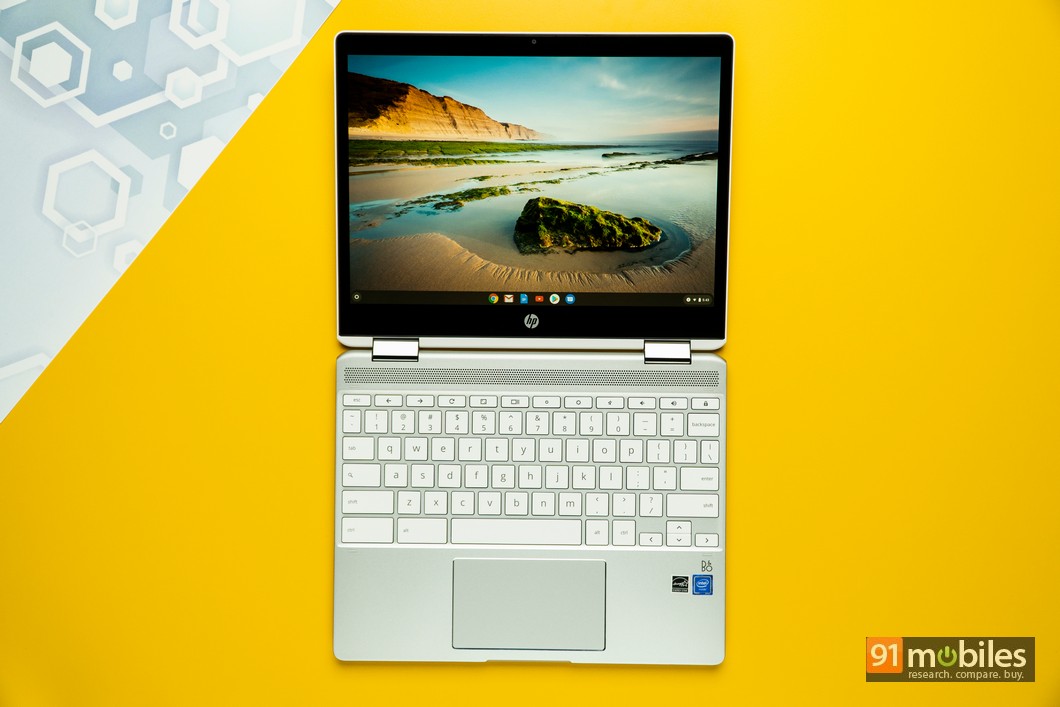 As far as ports go, the x360 has two USB-C ports, one on either side, and both of them can be conveniently used to charge the device. There is also a Kensington Lock Slot, a 3.5mm headphone jack, along with a USB-A port on the right. The hinge allows the display to fold completely on to the back so that one can use it as a tablet. The touchscreen functionality on the screen is good, but it took some practice to adjust the display in a way that was easy to use. The keyboard is not detachable which means that when in tablet mode, the keys can still be felt on the back, which could make it slightly uncomfortable to hold. 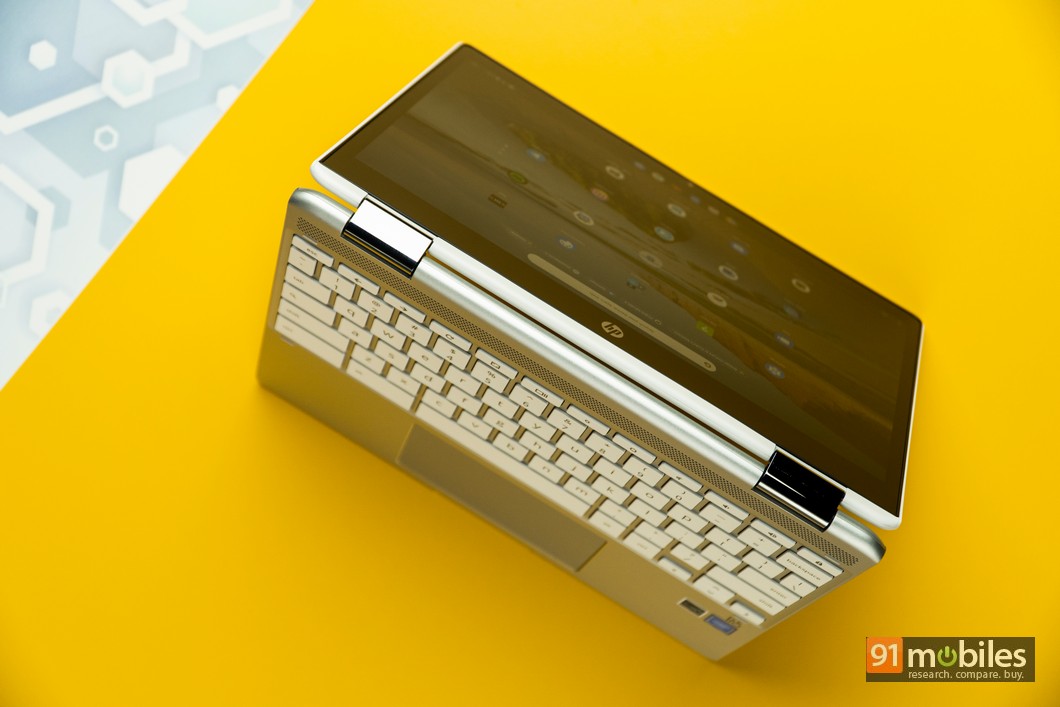 The display on the Chromebook happens to be a 3:2 aspect ratio screen which, according to HP, is a first in the laptop world. Thick bezels surround the entirety of the screen which is 12-inches in size, and is an IPS LCD panel with a resolution of 1,366 x 912. The display, as you’d expect from a laptop costing about Rs 30,000, is not exactly great. The colours appear slightly washed out although the brightness levels were satisfactory. There is no stylus provided with the Chromebook, but HP says that the device incorporates the Universal Stylus Initiative (USI) which allows support for all kinds of styluses. The touch response on the screen is just about good.

The chiclet-style keyboard on the Chromebook 12b is quite easy to type on. As a matter of fact, I’m currently typing out the review on the device and so far the experience has been quite enjoyable. Initially, I thought that the small size of the laptop combined with the unusual 3:2 aspect ratio would result in a cramped keyboard, but as it turns out, that is not the case. The key travel is respectable enough and there is also backlighting for typing out in the dark. Since this is a Chromebook, it omits both the Windows keys and there are also no Function keys at the top. There are however, other useful keys such as brightness and volume controls, a key to switch windows instantly, a key for expanding to full screen, refresh key and two keys to go back and forward on a web page. All-in-all, if typing out documents and emails over a long period of time is something that you do often, then this keyboard will not disappoint you. 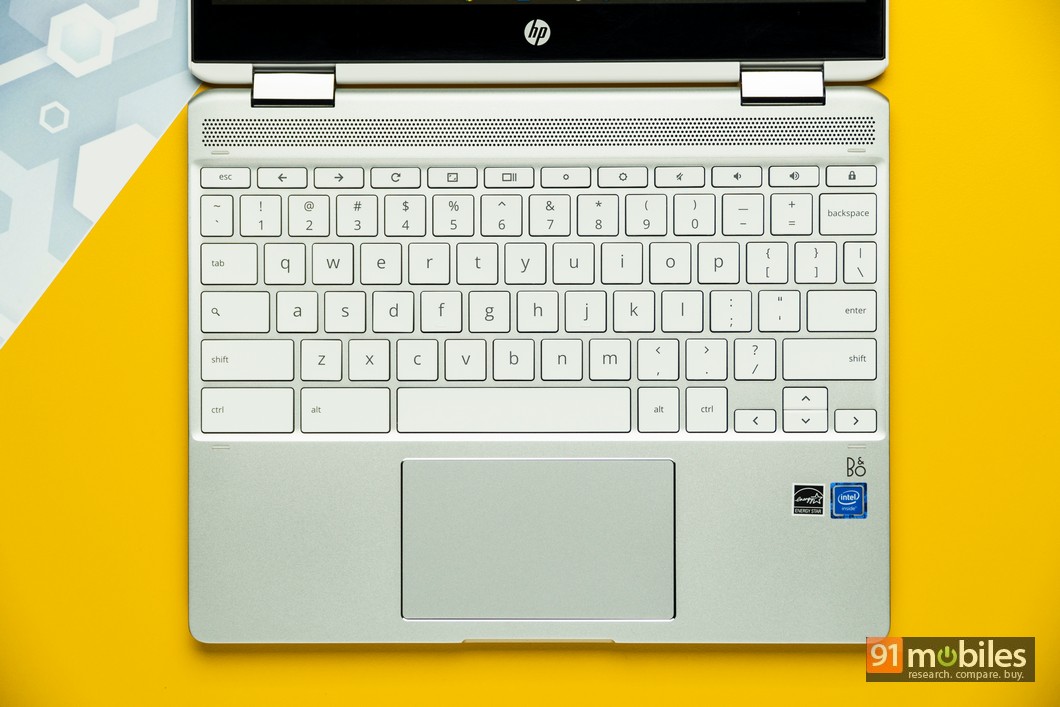 The trackpad, on the other hand, is not exactly precision-driven. For one, it doesn’t register taps in quite a few cases, which means that you’d have to use the button underneath, which is an inconvenience. The Chromebook also employs a two-finger touch to replicate the action of a right-click on a Windows machine, and the general hit-or-miss problem of the trackpad makes it all the more difficult to use it. You would do well to have a mouse handy just in case the trackpad problems become unbearable, but that would mean utilising the only USB-A port on the laptop.

To put it mildly, you do not want to do a lot of graphically-intensive tasks on the Chromebook x360 12b. Not only because that is not what the device has been designed for, but also for the fact that you might literally be pulling your hair even if you attempt to do something processor-heavy. The Celeron N4000 that powers the device was launched in 2017 as part of Intel’s Gemini Lake-series of processors, and is a 14nm dual-core chipset with a max frequency of 2.6GHz. Sustained load of a couple of Chrome tabs opened in two separate windows can sometimes overwhelm this device. If YouTube is playing in the back, the lag between switching windows becomes even more prominent. The 4GB of RAM does not help matters much. The boot time from start to opening a Chrome tab stands at 27 seconds, which includes the 12 seconds it takes from start to the lock screen. You would expect better from a Rs 30,000 machine. Apart from that, you get only 64GB of onboard storage which can be expanded to 256GB using a micro-SD card. 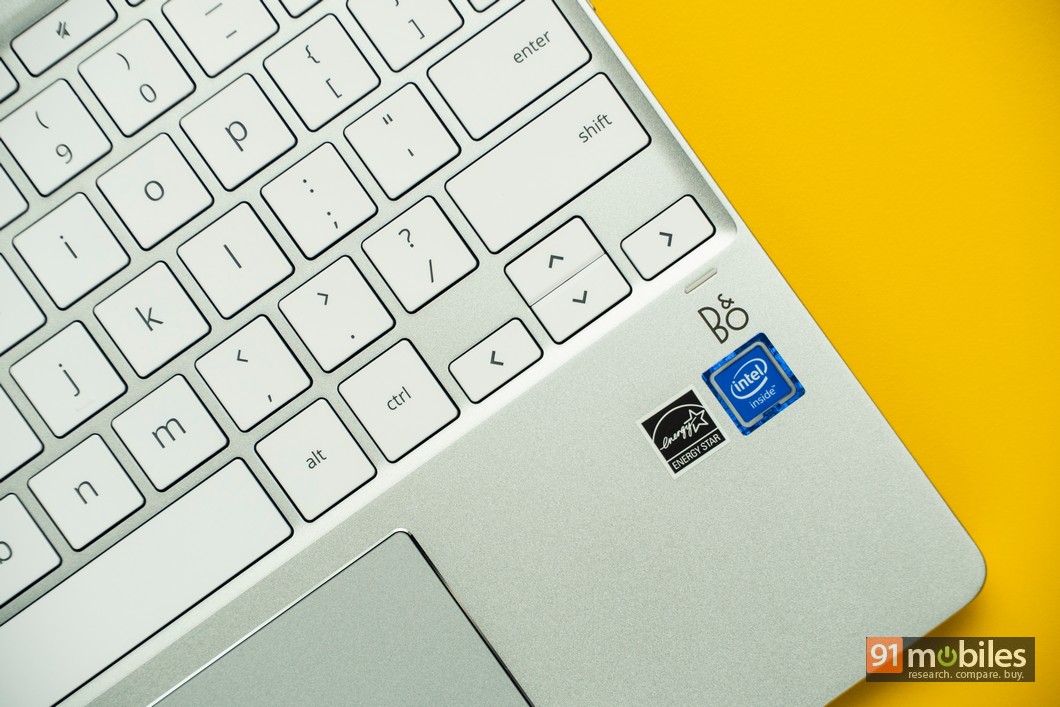 Just for the kicks, I decided to install PUBG Mobile on the Chromebook. Being a mobile game and all, I believed that the device would at least run the game. The game took forever to reach the login screen. Chrome will function just about fine on the device though you might not want to open more than three windows at a time. To its credit though, if you only use the device for browsing the web, typing, and watching movies, then it will not disappoint you. 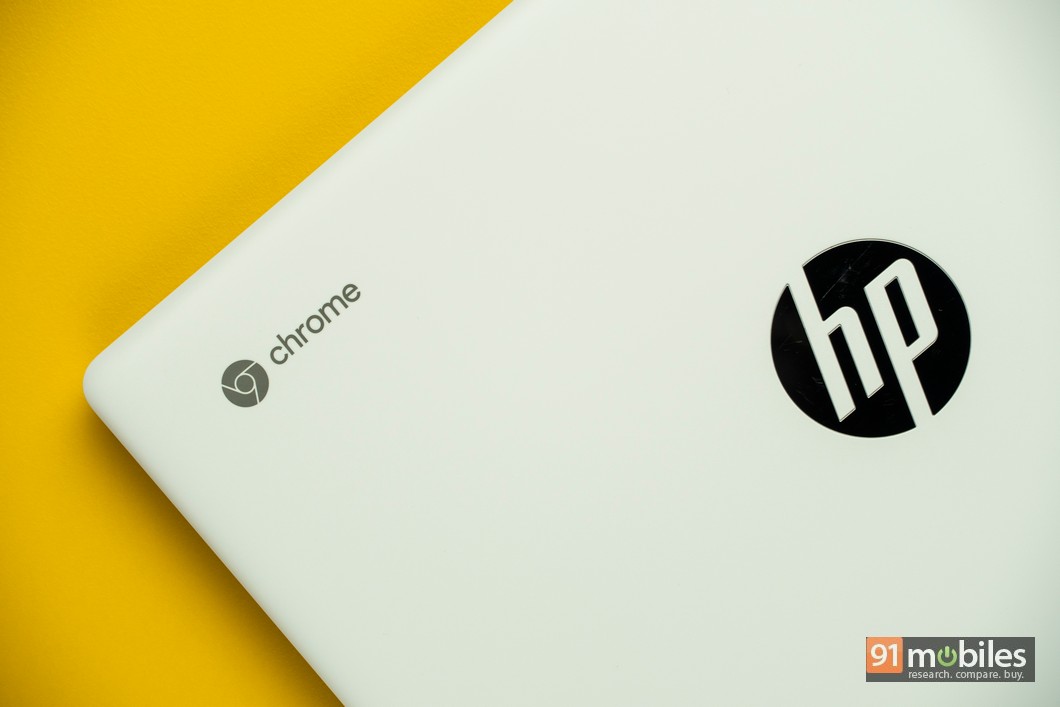 The Chromebook x360 12b does house good speakers at the top of the keyboard. At full volume, the speakers get quite loud, not just for the sake of sounding loud but with an added depth to the sound quality that is very rarely seen on laptops of this price range. It makes sense since the device has Bang & Olufsen branded speakers, which is a case for most of the HP laptops coming out nowadays. The headphone jack also delivers quality sound. 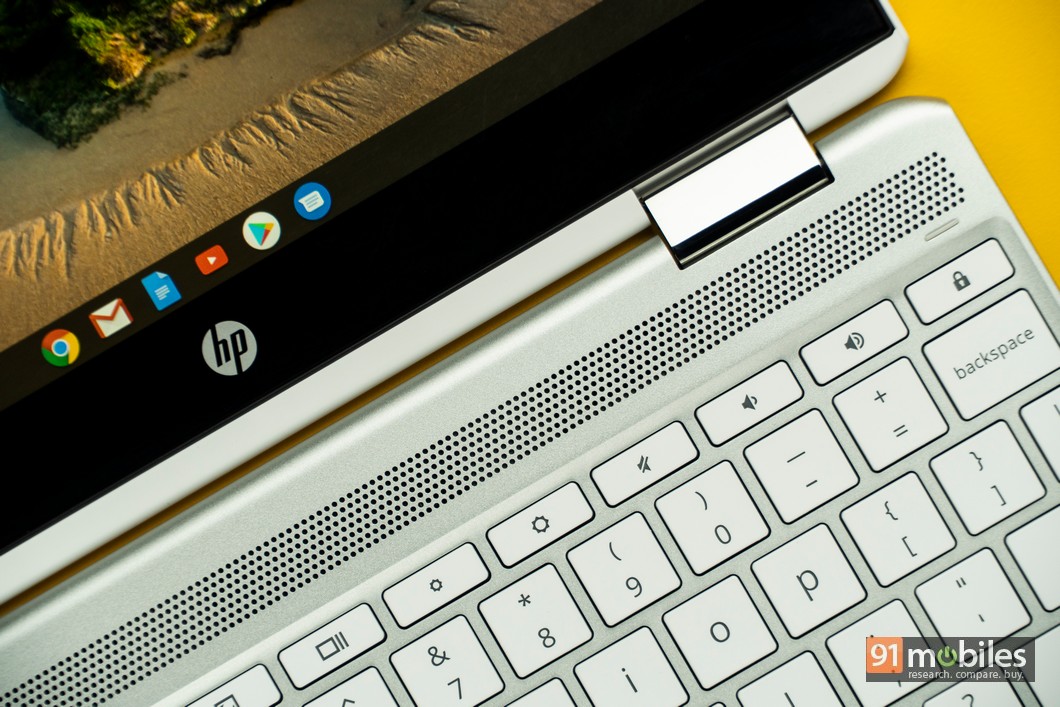 ChromeOS has been historically enabled not for performance users, but more for making use of Google’s Chrome browser. Indeed everything is synced around your Google Account and inevitably with Chrome. For some, the instant connectivity of your smartphone to your laptop is very useful as is the ability to access the Play Store instantly. But in the end, ChromeOS is just a glorified way of using the Chrome browser. Some of the apps such as Facebook and Instagram have not been modified to make use of the larger screen real estate on the device. There are no desktop icons on the start screen and you will have to access all the apps by sliding up from the middle of the screen. However, upon usage, you will become familiar with the UI of ChromeOS. There is also the fact, ChromeOS utilises less of the processor’s resources which means that an equally specced Windows machine is likely going to be slower than the Chromebook. 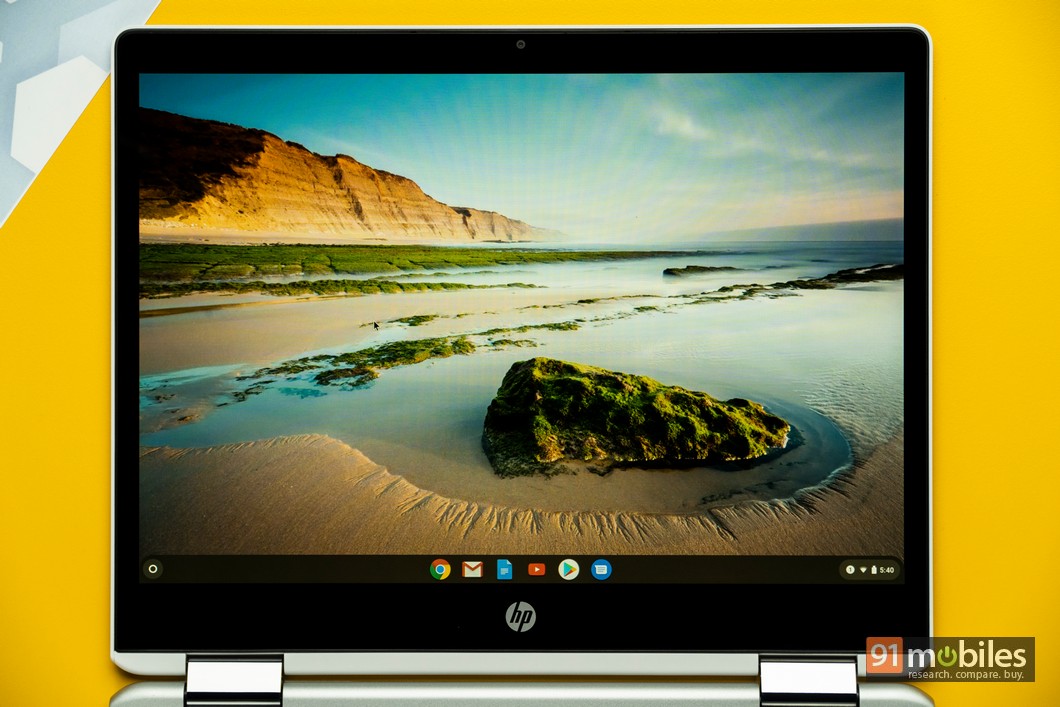 While they’re not always-on laptops with insane full-day battery backup, Chromebooks in general deliver more on the battery front than their Windows counterparts. I’m happy to say that the Chromebook lives up to its name by delivering a stellar battery life which lasted me my entire workday of 9 hours on a single charge. Granted the usage was mostly limited to using Chrome and some amount of Netflix, but that was exactly what I did on my Asus Vivobook 15 and it dies out at a paltry 3.5 hours. The Chromebook x360 12b will serve you quite well if you are out on long trips and have to quickly write out a document or just view Netflix on the go. The 45W charger in the box will charge the device in about 2 hours.

HP’s lineup of Chromebooks can leave you with your head scratching. This means that the slightly pricier Chromebook x360 14 with the Intel i3/i5 chipset could seem like a worthwhile option considering it has everything that the 12b has along with a better display, battery and definitely much better performance at a price that is only about Rs 10,000 more. The normal Chromebook 14 has the same Intel Celeron processor but lacks a touch-screen or the rotating screen. More importantly, though it sells at Rs 8,000 less. The choice is clear. If you have some processing requirements from your Chromebook, then the x360 14 with an Intel i3 chipset should serve you well. If cost is a factor then you would do well with the Chromebook 14. If style and portability matter to you should you consider the Chromebook x360 12b. 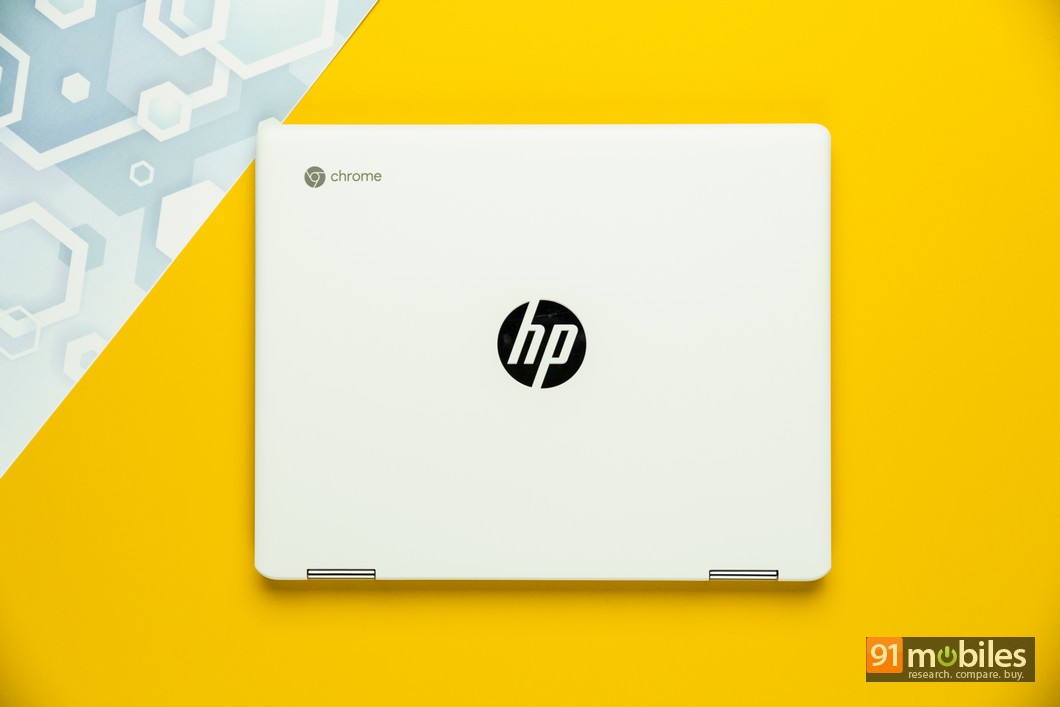