“Intel inside” has become more than a marketing slogan. While the tagline was created back in 1991, it still seems to work well as a seal of approval for deciding which PC or laptop to buy. That’s not to say that the California-based chipmaker doesn’t face any competition (of course, on the mobile side, Intel has left the turf open for the likes of Qualcomm and MediaTek). AMD (Advanced Micro Devices) has been trying to rival Intel’s chips for a long time, and its latest Ryzen processors comes quite close. Perhaps that’s why quite a few laptop makers are opting for AMD’s Ryzen chips. We recently reviewed the ASUS F570Z Gaming (review) which shipped with the Ryzen 5 CPU, and today, we’re turning our focus to another Ryzen 5-powered rig – the HP Envy x360. The device does have a lot of other factors that make it stand out from its peers, including a 2-in-1 form factor and B&O Speakers. But are those enough to justify the Envy x360’s asking price of Rs 77,990? Well, that’s what I want to find out in my ~1,600-word account of using the device for the past two weeks as my primary work machine. 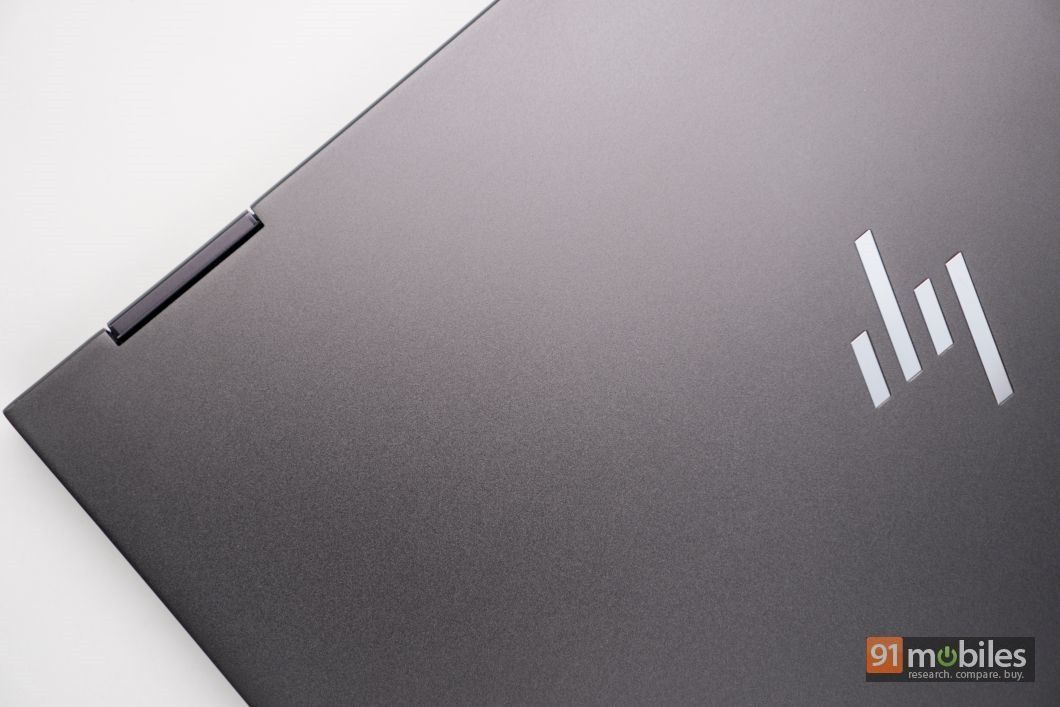 As far as minimally-designed laptops go, HP’s Envy x360 should rank quite high on the list. With its dark exterior which only houses the brand’s logo, the machine has an appealing design. Furthermore, it’s quite lightweight too as it tips the scales at 1.27g. Just 14.9mm thick, the rig is quite sleek as well. 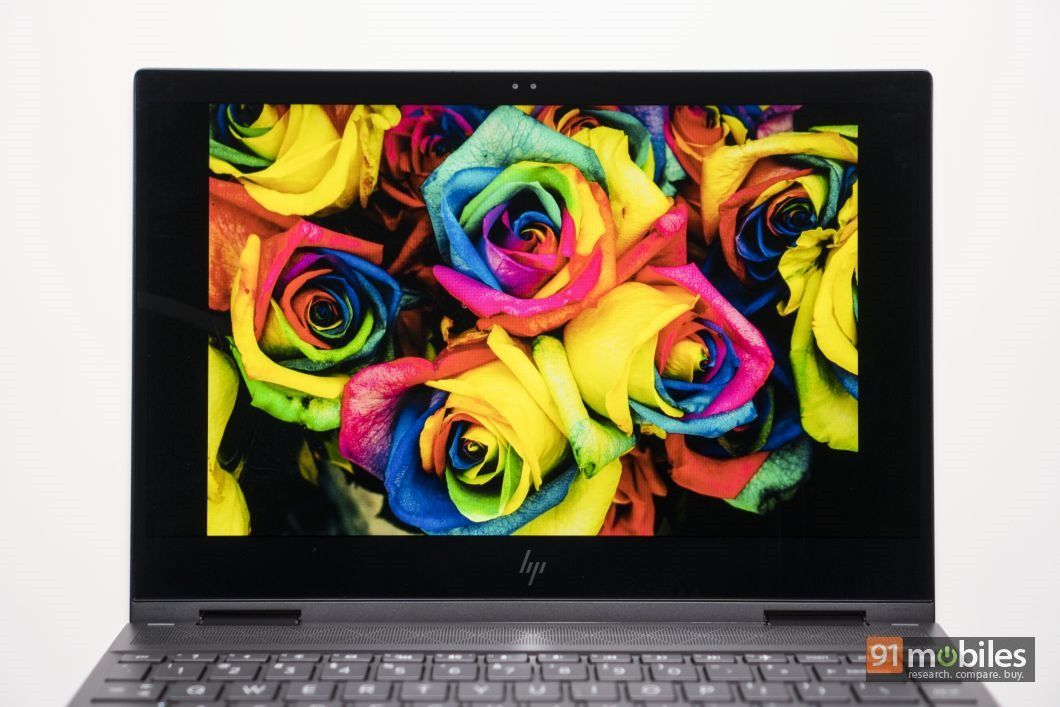 Flip the laptop open (which can be done single-handedly with ease) and the same theme continues – at least in terms of the classy-looking colour. But otherwise, there’s a lot going on in the keyboard area. Firstly, you’ll find the X-shaped speaker grille spread across the entire upper portion, which is quite unusual, which also means that the keyboard is placed lower than usual. While I’ll discuss the keyboard in detail in the next section, it’s worth mentioning that the palm rest area might not be ideal for many people. Below the keyboard, you’ll find the trackpad, which is slightly wider than usual… possibly to make up for the lower height. The quad-speaker array however, does offer an impressive and loud sound output 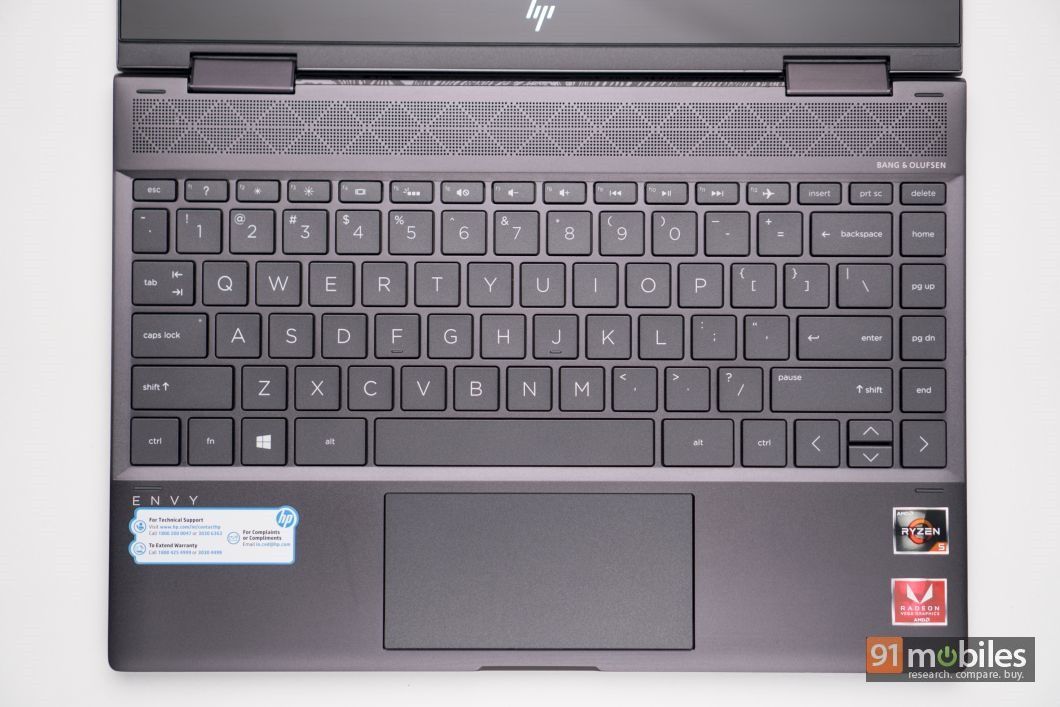 In terms of the ports, the minimalistic theme continues – you’ll only find the USB Type-A port on either side, a 3.5mm headphone socket on the left, a proprietary barrel charging port and a Type-C socket with support for Thunderbolt on the right.

Of course, I haven’t yet discussed the biggest calling cards of the HP Envy x360 (the hint is in the name, you see). The laptop screen can be rotated 360-degrees, allowing you to use it in various modes like tent or tablet. Thanks to the aluminium construction, the device seems quite solid, allowing you to use the different yoga-like postures with confidence. To make it easier to use the rig as a regular laptop or a tablet, the power switch has been placed on the left, whereas the right edge houses the volume rocker. The cooling vents are also placed on the left spine. 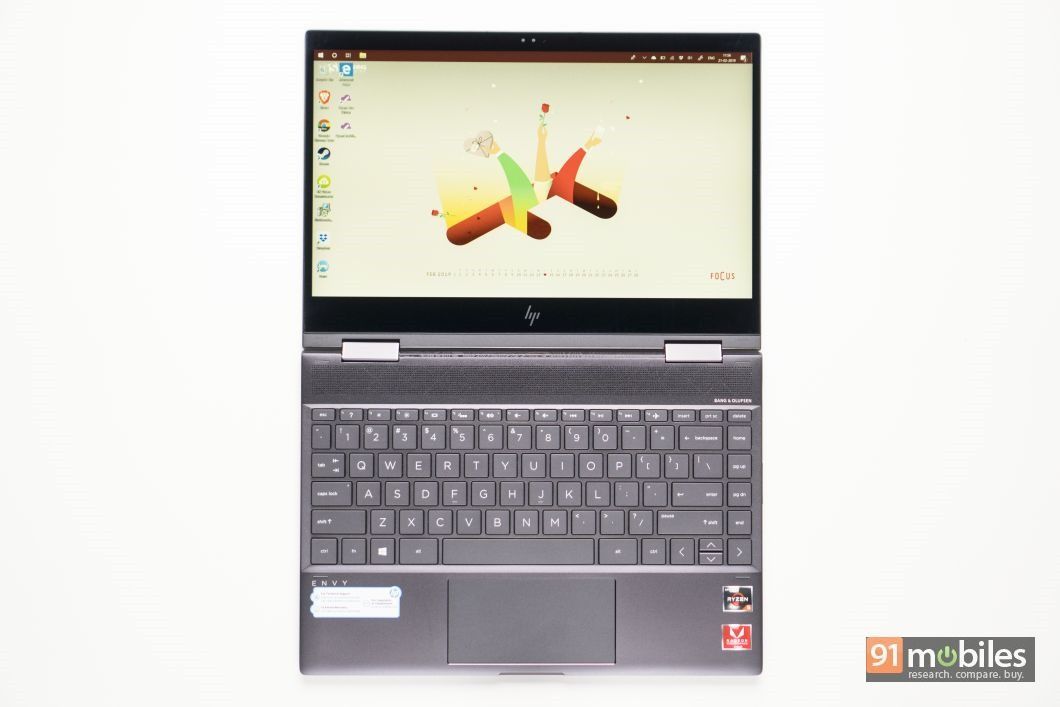 With regards to the build quality, the screen is quite robust, though it does show some amount of flex when pressure is applied on either side. The hinge mechanism feels really solid, and ensures that you can use the laptop in any position of your liking. Overall, the Envy x360 can easily give even pricier laptops a run for their money with its sublime design and robust build.

Coming to the HP Envy x360’s window to the world – the device packs a 13.3-inch LCD panel. With full HD resolution, the screen offers sharp text and vibrant visuals. The brightness levels are also pretty good, though you might it difficult to use the machine outdoors. The touchscreen works like a charm, but sadly, multi-gesture support seems to be a hit-and-miss affair. You can also use the Active Stylus to interact with the screen, which unlike most other brands, is being bundled free of charge. Protecting the panel against scratches is a layer of Corning Gorilla Glass NBT. 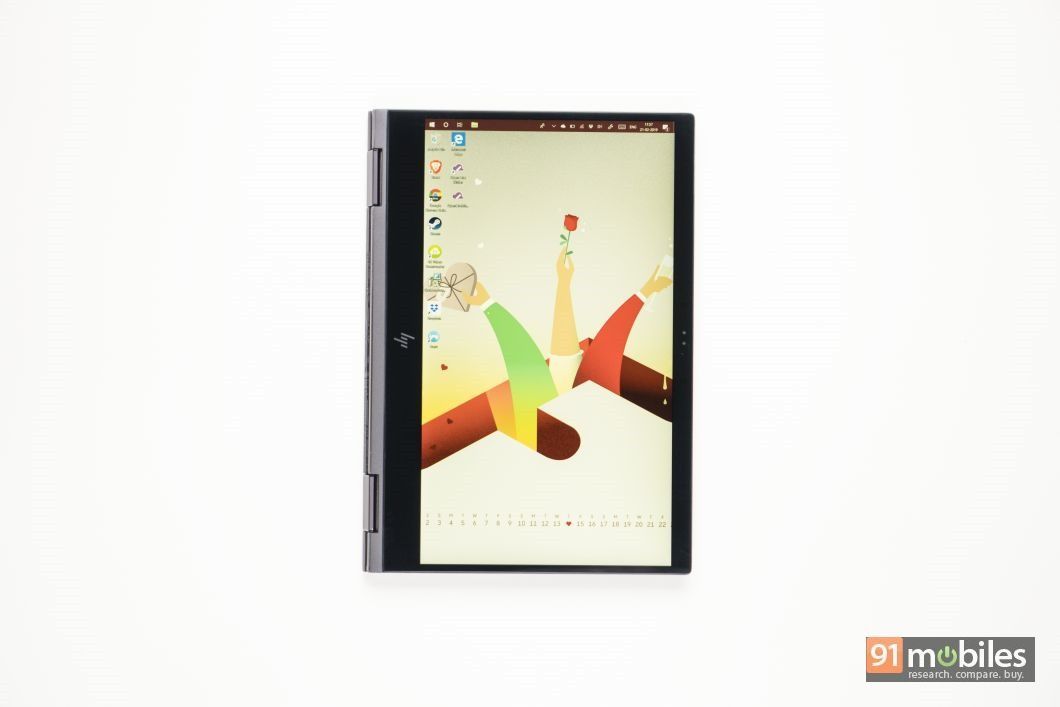 Even though the laptop is quite compact, it does not offer a bezel-less display, especially when you consider the width of bezels on top (housing the webcam and an IR sensor), and double that space at the bottom, sporting just the HP logo. You do get face unlock feature with Windows Hello, which works well in most scenarios except in dim settings.

To say that the Envy x360’s keyboard evokes mixed feelings wouldn’t be wrong. The first time I started using it, the keys seemed to be quite stiff and there wasn’t much feedback either. However, once I got used to the keys, typing became quite fast and accurate too. The keys have enough spacing to ensure that there aren’t many typos, and the travel is quite decent as well. I also liked the fact that the Caps Lock and Mute keys have LED indicators to let you know when those functionalities are active. Yet, I can’t say that this is the best keyboard you could find in this price bracket, and the response of the keys also didn’t seem up to the mark, especially while pressing the Backspace key or moving between words or scrolling webpages with the arrow keys. 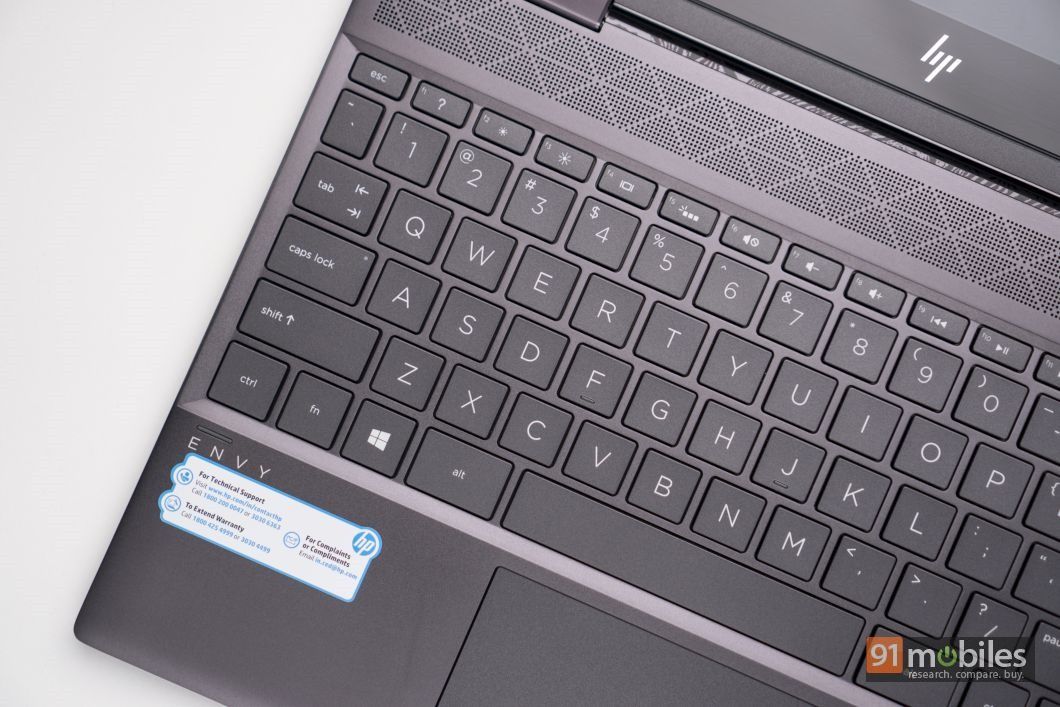 Sadly, the experience is similar while talking about the trackpad. HP seems to be the last brand standing which hasn’t made a switch to Microsoft’s precision drivers – which means that the trackpad with Synaptics drivers isn’t smooth or as accurate as you might have liked. In fact, on the Envy x360, I found myself resorting to the touchscreen when I wasn’t using a wireless mouse. 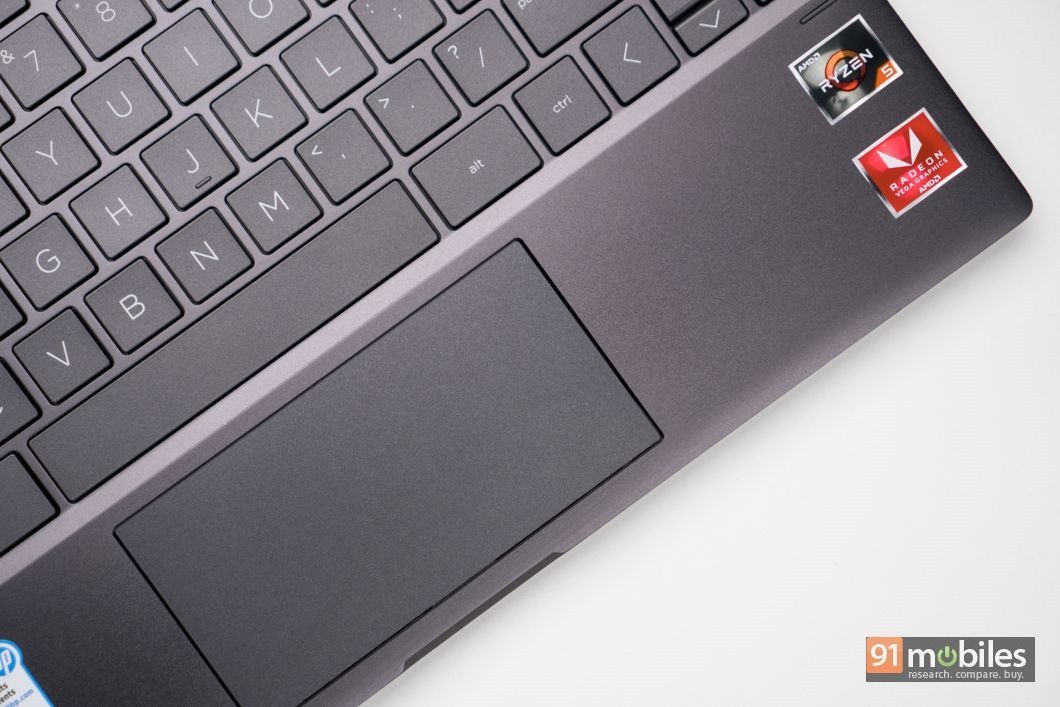 Considering I started this review stating that the Ryzen platform from AMD aims to mount a solid challenge to Intel… I’m sure you must be wondering how the HP Envy x360 performs. Well, I’m glad to say that the device offers smooth usage in day-to-day tasks, including running multiple tabs on a browser (usually Chrome and Brave browser, in my case), listening to music via Apple iTunes, writing stuff using Sublime Text and Microsoft Word, and running Franz (which aggregates various messaging services). The Ryzen 5 chipset was able to ensure that the laptop can handle these tasks well, and when paired with 8GB RAM, multitasking was quick too. PCMark 10’s results reflect this experience, as the laptop scored 3,300 points, which is similar or just slightly lower than the devices that are fuelled by Intel’s i5 chipsets.

What about gaming performance? The Envy x360 gets AMD’s Radeon Vega graphics, which promise smooth rendering. However, the graphics are only suited for casual titles like Rocket League, and even then you get lower-than-expected frame rates of 12 to 14fps. In fact, games like Rainbow Six Siege proved to be a bottleneck for this hardware. Cinebench also showed similar results as the device scored 33.82 fps and 595cb in the OpenGL and CPU tests. The laptop also gets quite hot while playing heavy games, with the cooling fans making a lot of noise as well. 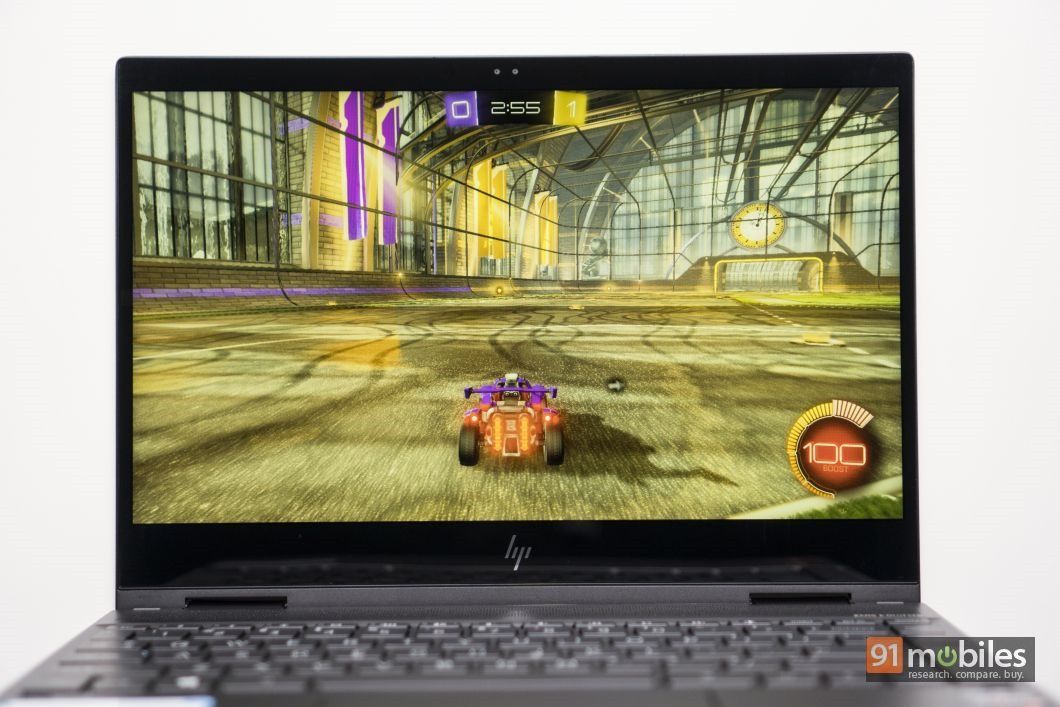 For storage, HP has included 256GB SSD on the Envy x360, out of which around 15GB space is reserved for the recovery partition. The SSD is quite fast, and CrystalDiskMark results suggest the same by showing 3225.1MB/s and 717.6MB/s read and write speeds, respectively. 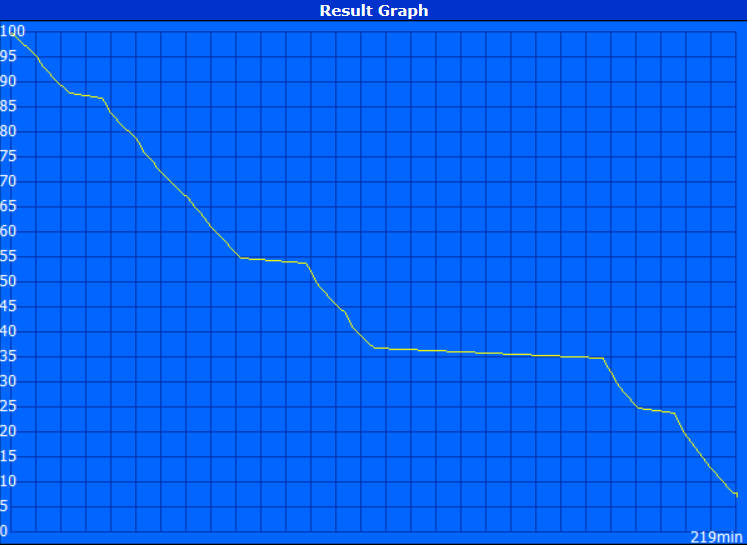 Running the show on Envy x360 is a 53.2Whr battery. This is yet another area where I’d have expected the laptop to perform better. With my workflow, I got a battery life of around four hours, which means that one can’t use the device for a full working day if they forget the charger at home. That said, one can of course, take the laptop into a meeting. The BatteryEaterPro test seemed to be quite harsh on the machine, as it only lasted three hours and 40 minutes. With the bundled adapter, the Envy x360 can be juiced up from 10 percent levels to 100 percent in slightly more than two hours.

With a starting price of Rs 63,490, the HP Envy x360 is clearly in a league of its own. In a price segment where you barely get any capable ultraportables, HP is offering a well-built 2-in-1 laptop that doesn’t compromise on day-to-day performance. The unit I reviewed costs Rs 77,990, and even for that price, it doesn’t really have any competition. If you’re looking for a similar form factor, then your options are limited to the Lenovo Yoga 530 and the Dell Inspiron 13 7000, both of which are similar to HP’s offering, and I’d pick the Envy x360 over them for its solid design. But if you don’t find the use case for a convertible, then you can find more powerful, gaming-oriented machines such as the Acer Predator Helios 300 and ASUS ROG Strix GL503GE. For a compact laptop, the Envy x360’s battery is its biggest shortcoming, and the trackpad is also not its strongest point either. 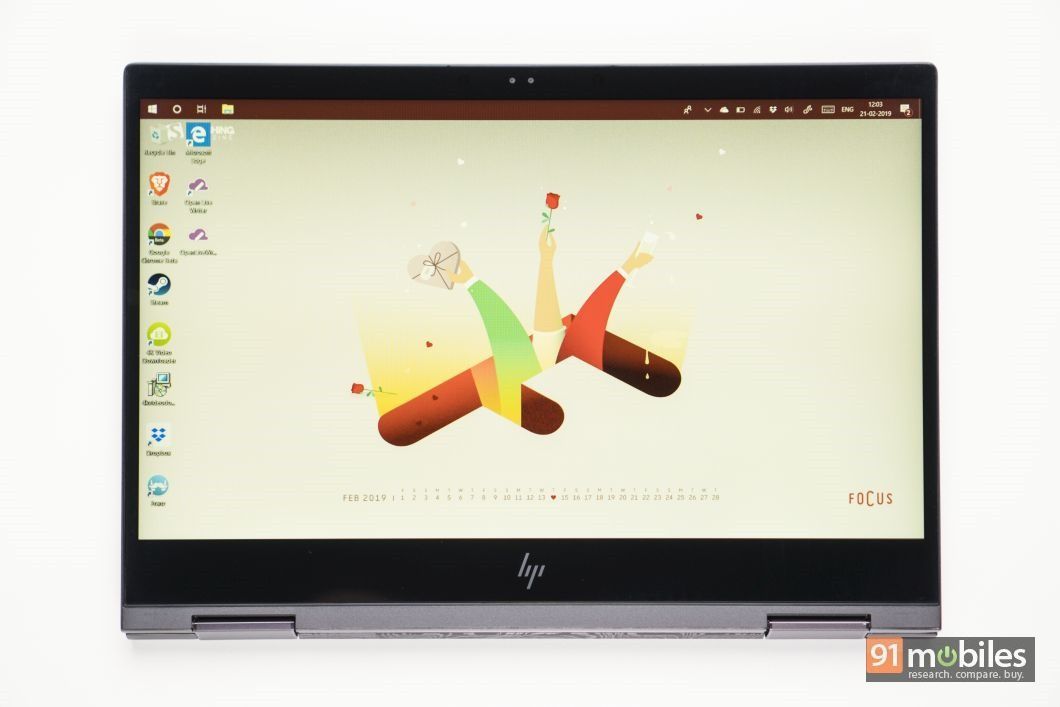 All said and done, if you’re in the market for a compact 2-in-1 on a budget, HP’s Envy x360 should serve your needs well, provided you keep its charger handy.

HP Chromebook 14 with HD touchscreen launched in India at Rs 23,990