HP has a way with laptop design and hardware that does inspire a second look, and that’s very evident with its Spectre lineup that has always trudged a line of elegance and portability. The company has revealed a new addition to the series in the form of the HP Spectre x360 with a 2-in-1 design and powered by Intel’s 11th-gen Evo platform. My review unit is priced at Rs 1,34,990 and competes with several other products in the same 2-in-1 space. Let’s find out if the latest HP Spectre x360 is worth spending your money on. 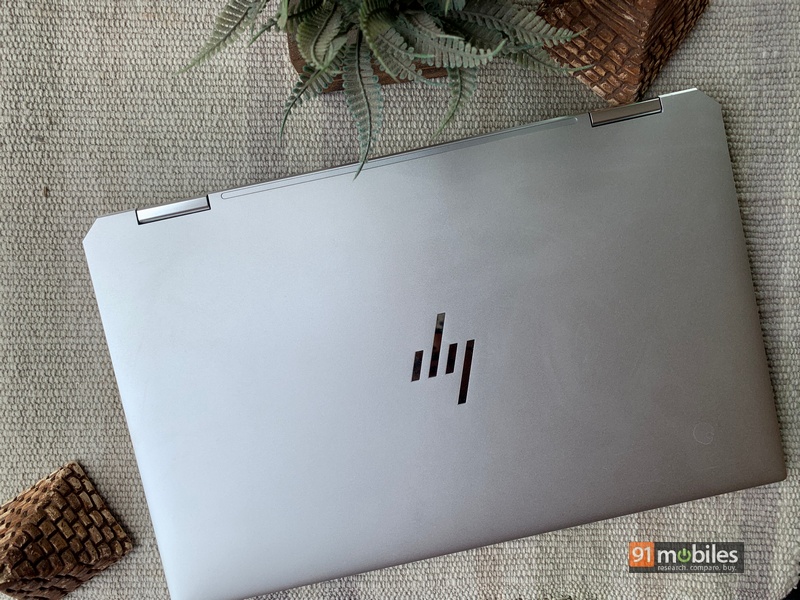 The design and build quality of the Spectre series exudes class. HP forayed into the 2-in-1 segment back in 2015 with the original Spectre x360 and over the years, the American PC maker has taken significant steps in perfecting the art. The HP Spectre x360 13t-aw200 builds upon a polished aluminium frame with a matte-silver colour scheme running along the entire chassis. It weighs about 1.2kg and combined with the rather slim bezels around the display and just 1.6cm of thickness, the laptop has a very compact form factor. The Spectre x360 slides into a plush leather sleeve provided in the box, which is just as well since you don’t want the rather opulent design getting scratched up. 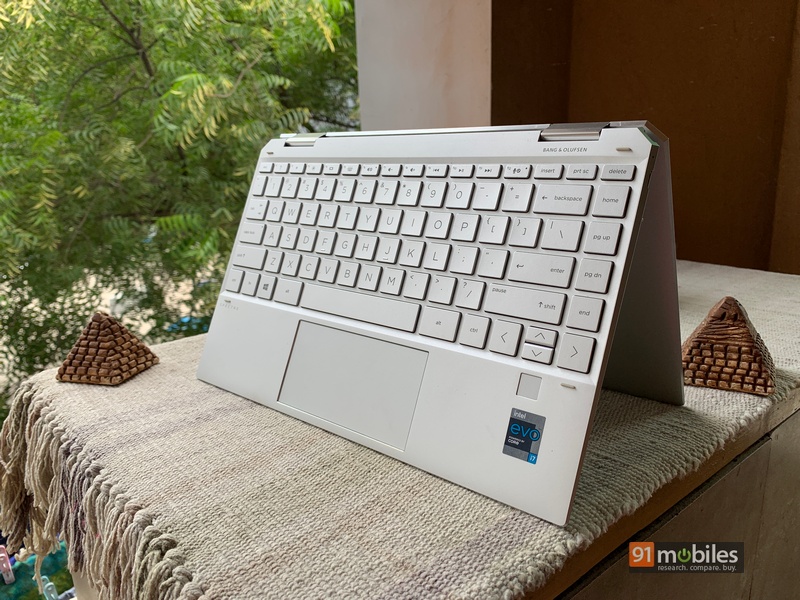 The base has a mini-hexagonal look with the top edges slanting inside and mirroring the lid’s bottom. You can find the power button on the left edge which is a unique placement that took me a while to figure out. Of course this being a 2-in-1, the hinge allows the panel to rotate a full 360-degrees with a smooth yet firm motion. Bang & Olufsen has made its collaboration known with the slightly inconspicuous branding at the top of the keyboard. Overall, if looks could kill, the HP Spectre x360 is definitely going to a supermax prison. The complete design aesthetic from top to bottom on the laptop is ultra-premium. 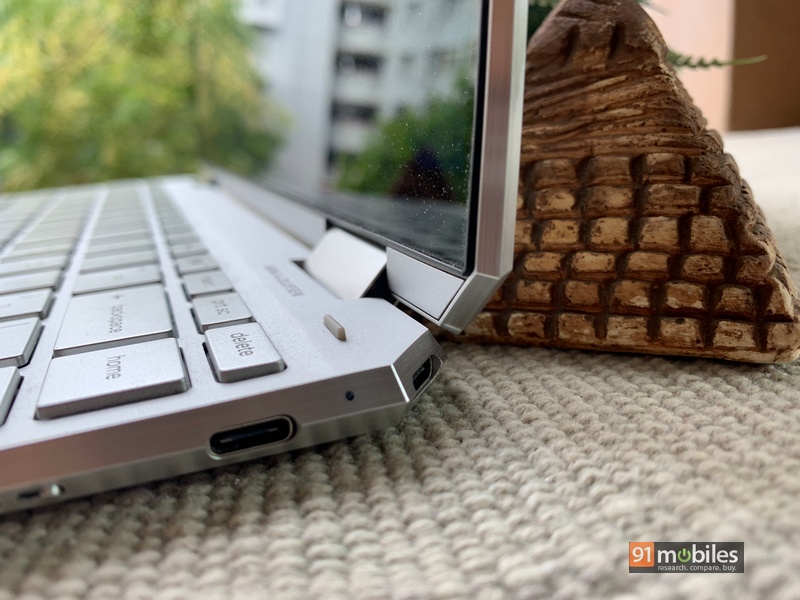 In terms of ports and connectivity, you get two USB C ports with Thunderbolt 4 and DisplayPort capabilities, a USB Gen A 3.2 port and a 3.5mm headphone jack. There is also a physical toggle on the side to block the webcam. For wireless connectivity, you get Wi-Fi 6 AX201 and Bluetooth 5. On the display side of things, the HP Spectre x360 brings in a 13.3-inch FHD (1,080 x 1,920) IPS LCD panel with a 60Hz refresh rate and 16:9 aspect ratio. The touchscreen capabilities work well with fingers as well as the stylus provided with the box. Slim bezels on three sides make for expansive viewing while not compromising on the size of the laptop. The panel is quite bright and punchy while the colour shift on tilting is almost non-existent. 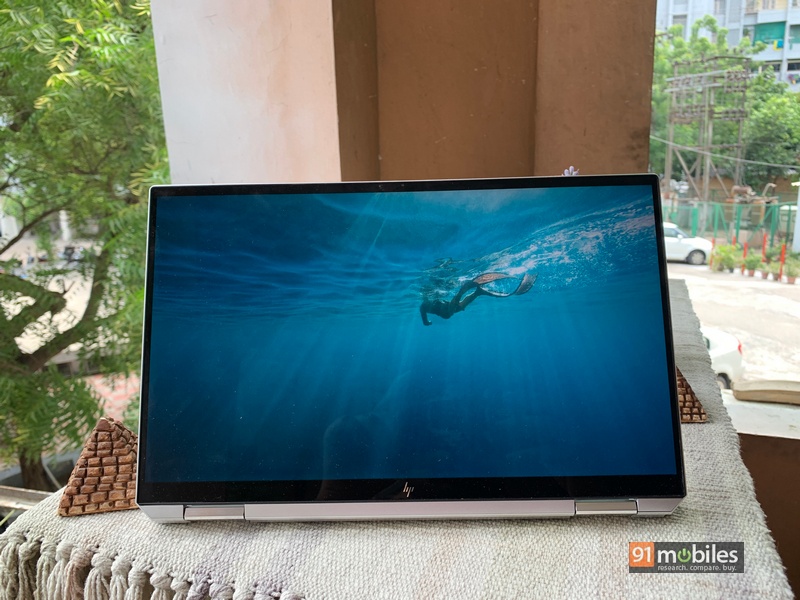 My qualm with HP keyboards has always been the bafflingly small up and down arrow keys positioned in between the regular-sized left and right arrow keys. The disappointment continues with the Spectre x360 but thankfully it remains the only minor flaw that is of concern on an otherwise excellent keyboard. You get the traditional six-row layout with chiclet-style keys that have reasonably good travel. The typing experience is not quiet but the soft clicks are soothing to my ear. Backlighting comes in two levels of intensity that give proper visibility during nighttime. There is also a fingerprint sensor just below the arrow keys which works exceedingly fast and has good reliability. The trackpad on the bottom has good latency and has the usual Windows Precision driver support although the rather small surface area does warrant an external mouse, at least for my usage. 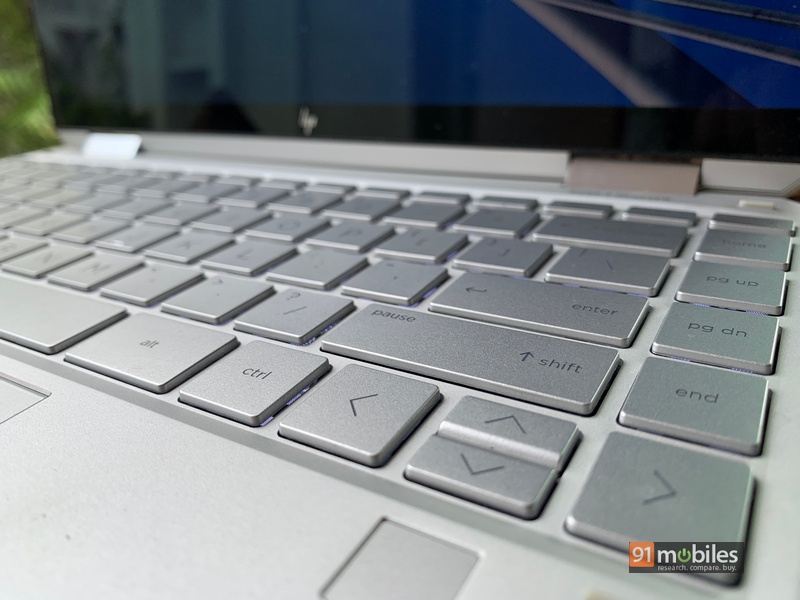 Intel has given the HP Spectre x360 the Evo certification which guarantees three things on the laptop: waking up from sleep in less than a second, at least 9 hours of battery life, and enabling up to 4 hours of laptop usage with 30 minutes of charging. Like the ASUS ExpertBook B9 (review), my review unit of the Spectre comes with Intel’s 11th-gen i7-1165G7 processor. Based on a 10nm fabrication process, the laptop certainly has respectable power efficiency but is not meant for handling a ton of processor-intensive tasks. Taking a look at the benchmark numbers you will realise that the machine’s main utility lies in running moderate tasks constituting the usual daily workflow and not for nuanced usage such as video editing or running heavy software. Geekbench and Cinebench R23’s tests revealed 1,496 and 1,376 as the single-core scores and 4,905 and 3,512 as multi-core scores. This is very much in line with Intel’s 11th-gen i7 G series of processors. The Spectre x360 comes with 16GB of LPDDR4x RAM and 512GB of SSD along 32GB of Intel Optane. CrystalDiskMark reveals the Read and Write speeds of the SSD to be 2,307MB/S and 1,112MB/s. The maximum my workflow demands from the computer is running the RAM-intensive Google Chrome with multiple tabs and windows which the laptop does quite efficiently. PCMark’s simulation yielded a score of 4,528 which is again in line with what you can expect from the specs. As for the GPU, the integrated Iris Xe graphics don’t like to be put under a lot of strain as the thin chassis does not leave too much room for thermal output. That being said, some light gaming can be accomplished on the device, such as Valorant at low graphics settings that can output about 65-70 fps before throttling down after about two hours of gameplay. Bang & Olufsen have done a decent job with the speakers but I still prefer the deeper sound on the ExpertBook B9’s speakers. The IR blaster accompanying the webcam is involved in snappy face and movement detection by opening up the laptop as soon as it detects I’ve sat down in front of it.

As for the battery life, the Evo platform certification guarantees about 9 hours of video playback time on the laptop. During my usage, I had charged the device to a full 100 percent in the beginning and ending up with just about 40 percent left after I called it a day. Suffice to say that you won’t be running out of juice anytime soon even if you fail to bring in your charger one day to work. Even if you do, the USB C power delivery input means you can charge the Spectre x360 with your phone’s adapter if push comes to shove. 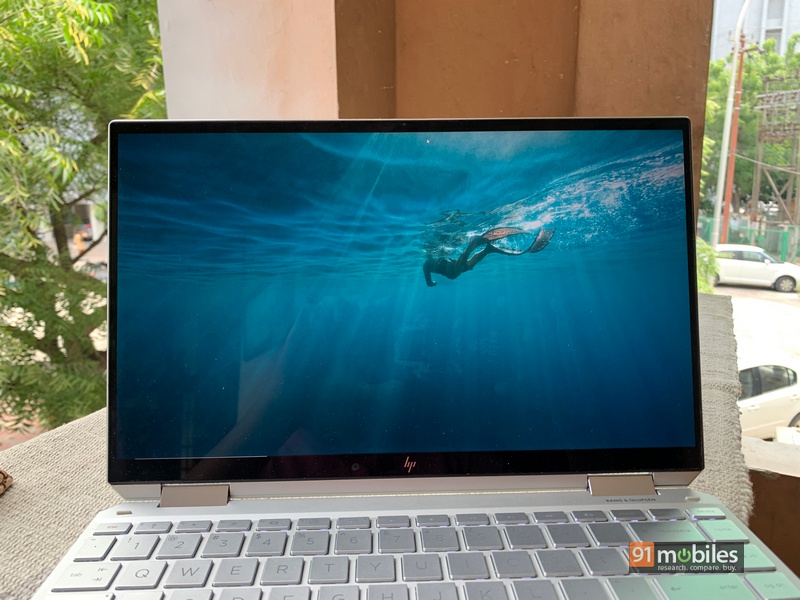 HP has done stellar work with the Spectre x360 in terms of its sleek and premium design aspects which will surely grab eyeballs. The device might not be meant for handling heavy workloads but packs in enough punch to run through Microsoft Office, Chrome, Adobe’s suite of applications not involving video editing and more. For a starting price of Rs 1,19,900, there are a few competing 2-in-1 options that include the ASUS ExpertBook B9 and the Dell XPS 13 9310, both of which are cheaper but not by a lot. However, none of them have the flashy appeal of the Spectre x360 which is certainly worth spending that extra Rs 5,000 on.