To say that gaming laptop sales have skyrocketed over the past couple of years would be an understatement. So much so, the rampant demand for a high-end gaming machine has enticed vendors to come up with competitively priced, spec-laden laptops. Case in point, the HP Victus 16, which pairs Intel’s Core i7-11800H processor with an RTX 3060 GPU, all for Rs 1,19,990. For the price, the device is aimed squarely at HP’s very-own Omen lineup, along with power-packed offerings from Lenovo (Legion 5, for instance), and Alienware’s stables. I have been using the Victus 16 as my daily laptop for a variety of use cases ranging from binging Netflix, to writing this review on WordPress and of course some casual gaming. Here are my thoughts on whether you should buy this machine or if there is something better in the market. 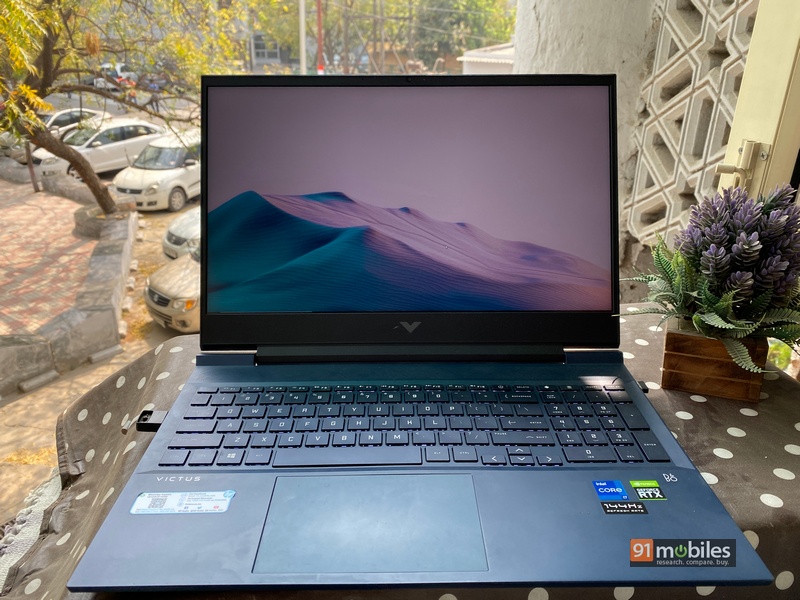 From a distance, the HP Victus 16 seemingly offers a robust build. However, upon closer inspection, the laptop’s hinge mechanism felt a tad flimsy. So much so, the display wobbled a lot when I was typing my heart out on the unit. The device is also a bit heavier than other 16-inch gaming laptops, which in turn takes away from the Victus 16’s ease of portability. In fact, I’d be surprised if your shoulders didn’t ache from carrying the laptop and its charging brick in your backpack whilst commuting. On the bright side, the laptop is void of any gaudy branding, and barring the ‘V’ etching on the lid, the device looks fairly understated, even in its “Performance Blue” colour scheme that extends to all parts of the chassis. Rest assured, buyers looking for a minimalistic gaming machine will find plenty to like about Victus 16’s monolithic aesthetic. That said, those looking for a bit more pizazz might have to look elsewhere. 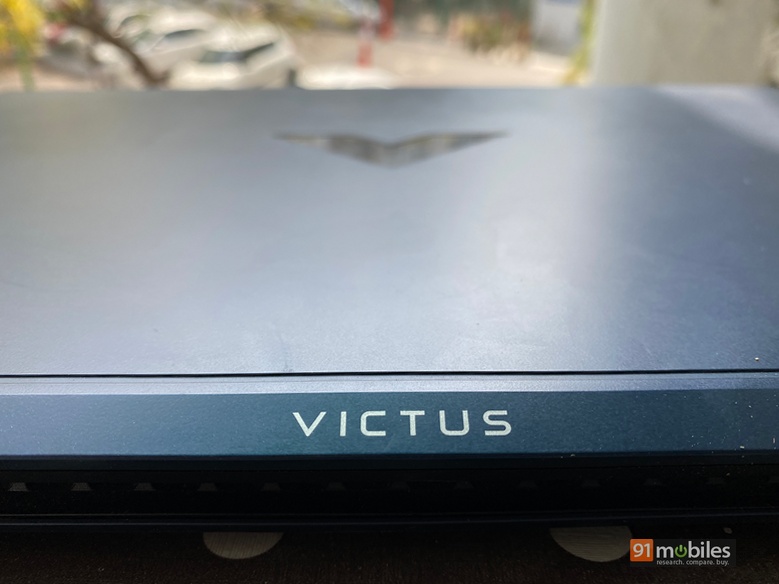 In terms of ports, the Victus 16 is loaded with a bevy of options, most of which can be found on the left fascia of the laptop. To wit, the unit ships with a USB 3.2 Gen A port, a USB Type-C with Thunderbolt 4 connector, an HDMI 2.1 slot, an RJ-45 Ethernet port, an SD card reader, and a 3.5mm headphone jack plus mic combo on its left-hand side. That’s not all, as the device ships with two USB 3.2 Gen A ports on the right fascia too. Talking about the wireless options, the laptop is compliant with WiFi 6 and offers Bluetooth 5.2 as well. The Victus 16 does not have any biometric authentication and the webcam up top is capable of 720p recording. A side note – the laptop’s power button is located next to the F12 function key, so you will have to get used to the unit’s unorthodox positioning. 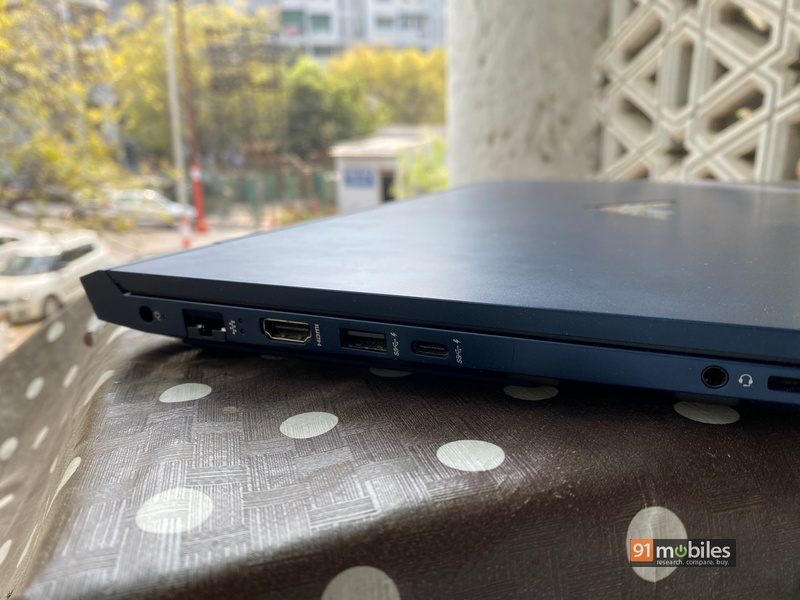 On the display side of things, the Victus 16 has, as the name implies, a 16.1-inch panel of the LCD variety. The display refreshes at 144Hz and correspondingly, buyers will be greeted with buttery smooth visuals, be it whilst browsing the interwebs, navigating through the system UI, or gaming. The resolution is capped to FHD which didn’t bother me much since the RTX 3060’s capabilities start to falter a bit when the GPU is stressed at QHD or UHD resolutions. What I did notice, however, was the unit’s peak brightness levels and at 300nits, the screen was a tad illegible outdoors. That said, the laptop’s screen was plenty bright for indoor usage. Rest assured, the Victus 16 offers a good media consumption experience that only falters in extremely well-lit environments. 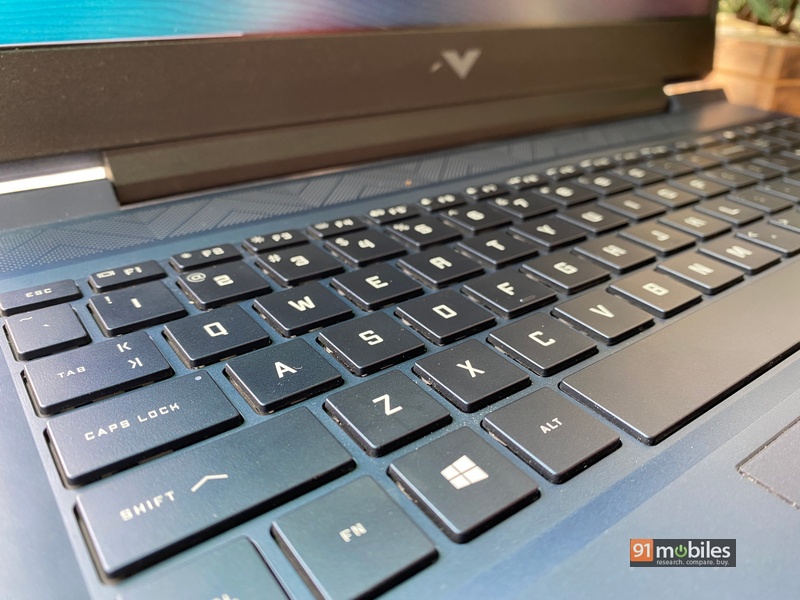 The HP Victus 16 is wide enough to accommodate a full-size Numpad, which will surely be appreciated by folks who routinely dabble with number-heavy Excels. The keyboard deck is arranged in the typical six-row layout with a thin strip of function keys at the very top. The unit does offer backlighting, albeit it is not adjustable and I found that at night, the brightness levels ached my eyes. Even so, the typing experience is quite pleasant with decent key travel and response. It did take a while but my fingers adjusted to the keyboard just fine. On a side note, I also quite like the font used to mark the keys. As for the trackpad, the unit is quite accomodating, offers good haptics, and worked just fine for casual browsing. However, seeing how the laptop is targeted at gamers, the necessity of an external mouse is likely to undermine the trackpad’s utility. 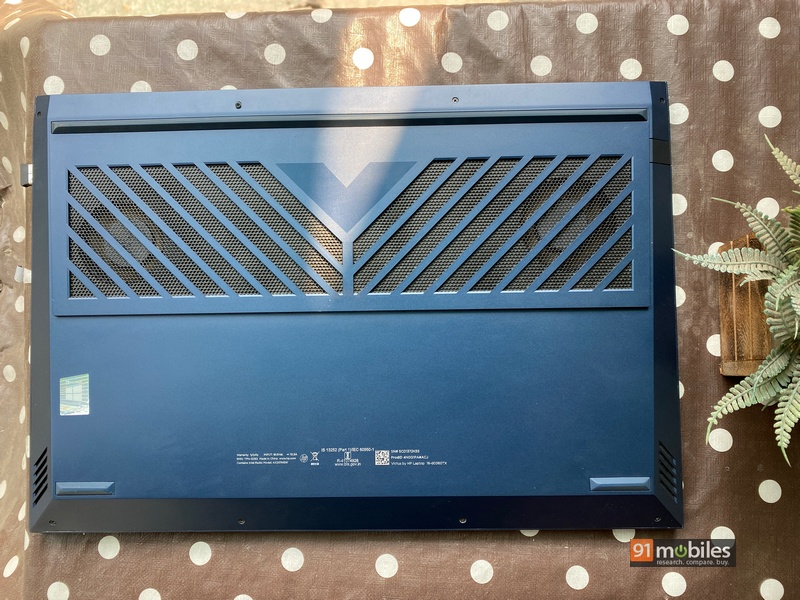 Coming to the meat of the matter, the laptop is backed by Intel’s Core i7-11800H processor that should crunch through your gaming and office needs without any hassles. To wit, the Victus 16 never seemed to miss a beat and breezed through my day-to-day usage, which revolved around operating a dozen Chrome tabs and windows while switching between Spotify, Adobe PDF reader, and similar work-related apps. To give you a better picture, I ran the Cinebench R23 benchmark to gauge the chipset’s single-core and multi-core performance. Notably, the laptop outputted 1,515 and 9,975 points respectively, which – while not the best scores from a 11800H chip – are on par with the competition. PCMark10’s regular workload benchmark awarded the device a score of 6,595 which is more than respectable too. As for memory, the laptop comes in a non-expandable, dual-channel 16GB DDR4 RAM option, while the storage needs are fulfilled by a 512GB of PCIe NVMe SSD. You can refer to the slider attached below to get a number on the SSD’s read and write speeds respectively. Moving on, I will admit, the unit’s RTX 3060 GPU with 6GB of VRAM matched my expectations amicably. Take Shadow of the Tomb Raider, for instance wherein, the device yielded 87fps and 95fps at the highest visual preset, and the high quality preset respectively. Compared to the Legion 5i Pro (review), which, by the way, is priced significantly higher, the Victus 16 offered similar performance. Similarly, 3DMark’s Time Spy benchmark puts the Victus 16’s score of 7,087 slightly behind the Legion 5i Pro. Warzone and Apex Legends were running at 110fps and 130fps respectively at High settings while Call of Duty: Cold War manages to pump out just above 90fps with all details and texture settings at High and ray tracing disabled. That said, the Victus 16 does get a bit hot, especially near the center of the keyboard deck. That said, the unit’s rising temps never caused any discomfort whilst gaming. On the flip side, the laptop’s fans rev and get quite noisy, nearly drowning out the device’s bottom-firing speakers. Suffice it to say, you’ll need to invest in a pair of headphones if you want to game on the Victus 16 without any distractions. 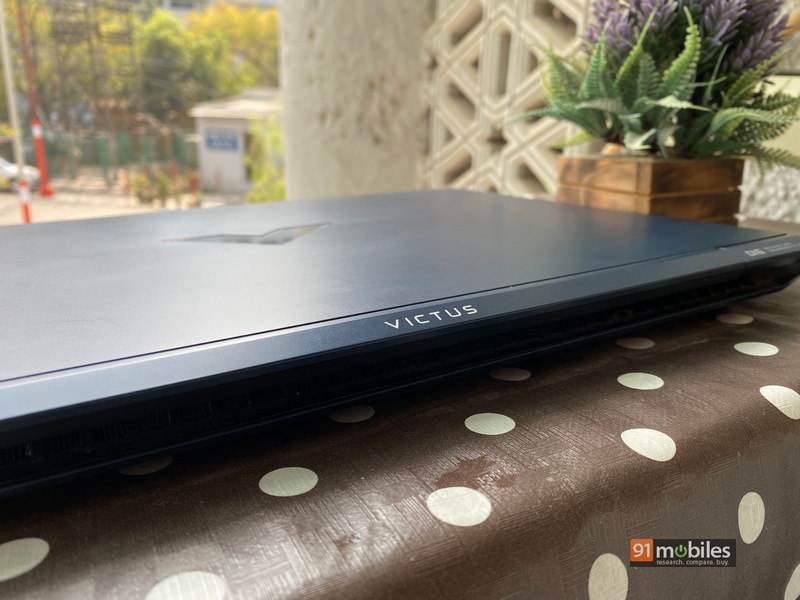 Battery life on gaming laptops is not known to be great and the 70Whr cell on the Victus 16 is no different. Under a battery-saving power option, the laptop lasts about 4 hours on a single charge but only if you are doing less strenuous tasks such as browsing on Chrome or watching YouTube. However, when trying to game the device gives up in about 2 hours or less, depending on the title. The 150W adapter, provided alongside the laptop, can provide up to 50 percent of the juice in about 40 minutes. 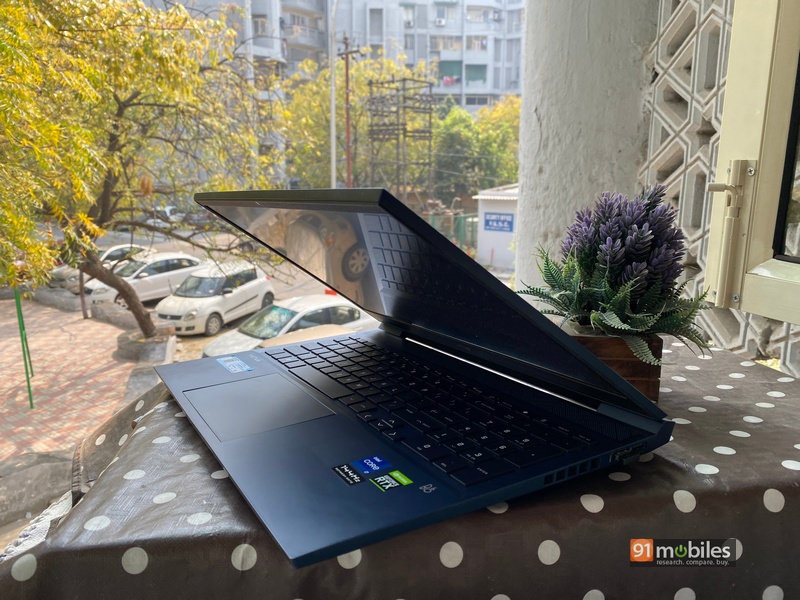 The HP Victus 16 is undoubtedly a beefy machine with an understated aesthetic that might not be everyone’s cup of tea. However, looks aside, the Victus 16 performs like a champ and the device comes toting a gorgeous 144Hz display too. Now, I think the hinge mechanism should’ve offered better resistance, and the speakers could’ve been louder as well. Be that as it may, for the price, the Victus 16 is a good option for a budget of under Rs 1,25,000.