91mobiles.com
Home Reviews Huawei Nova 3i review: a stylish contender that gets hit hard by...

“Here’s our comprehensive review of the Huawei Nova 3i”

Huawei is trying its darndest to make a big splash in the Indian smartphone industry. Although the company’s subsidiary Honor is ranking up in terms of popularity, Huawei’s own offerings are yet to make its mark in the sub-continent. Consequently, the brand is flooding the Indian market with compelling offerings, such as the recently launched Nova 3 smartphone (review), which went toe-to-toe with the OnePlus 6 (review). Alongside the smartphone, Huawei launched a stripped-down version of the same to fill the void in the Rs 20K – Rs 30K price segment. The device in question is the Nova 3i and in this review, let’s take a look at what it brings to the table.

As we mentioned previously, the Nova 3i is in more ways than one, the same smartphone as the Nova 3. However, the handset brings some exciting features too, including a brand-new processor from the company’s stables. But, before we dive into the differences, let us address the similarities between the two phones. 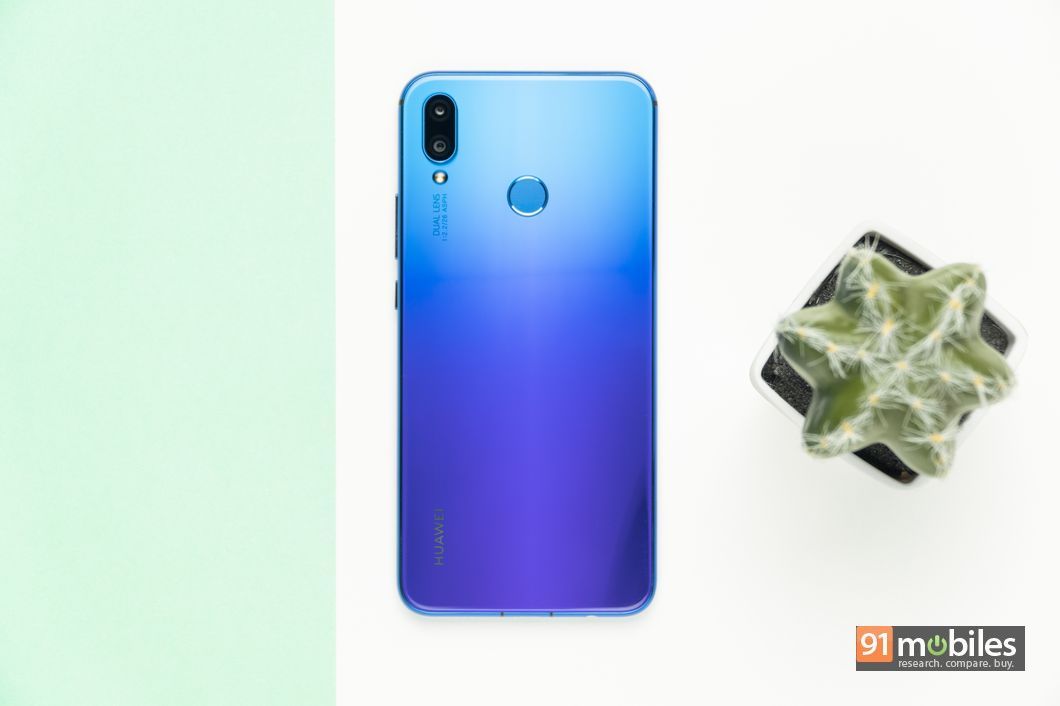 To begin with,  the design of the two smartphones is more or less the same, and both the devices make use of an all-glass construction. Similar to the Nova 3, the Nova 3i is also available in an Iris Purple colourway which lends the smartphone an eye-catching design, to say the least. As a matter of fact, the Nova 3i is undoubtedly the most beautiful handset you can get your hands on in its price range. Moreover, the handset boasts a premium in-hand feel which rivals the likes of much more expensive offerings from Apple and Samsung. Suffice it to say, we couldn’t stop gawking at the smartphone and are willing to bet that you wouldn’t be able to either. 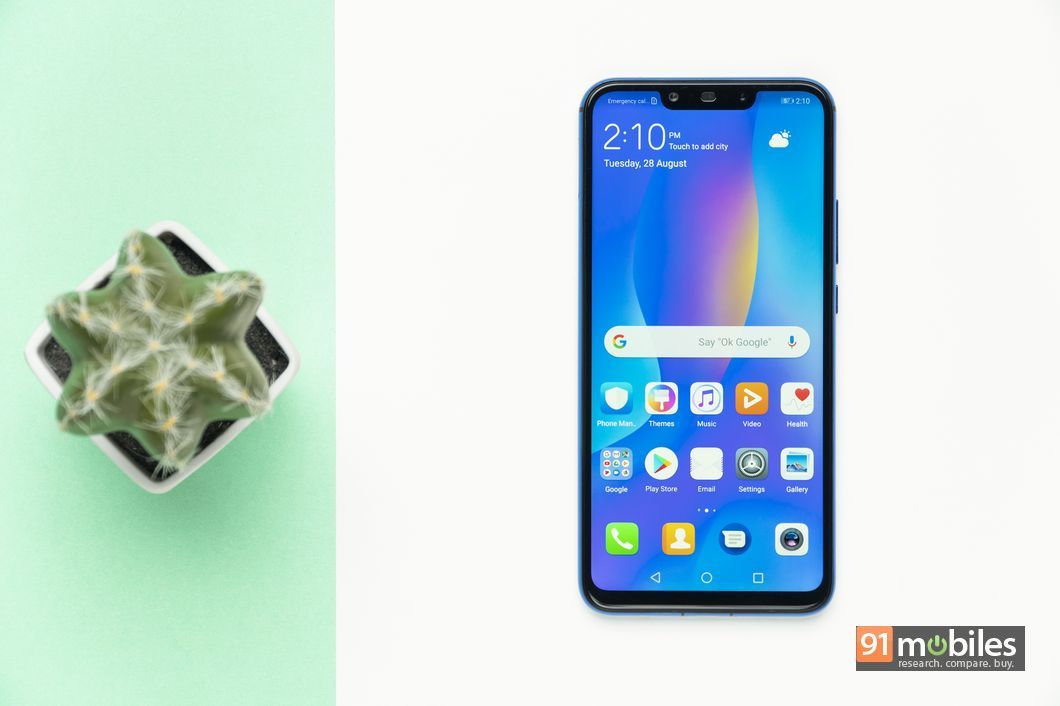 Unfortunately, glass-back smartphones come with their fair share of compromises and the Nova 3i is no exception. The handset is audaciously slippery, both, in the hand and when it’s kept flat on a surface. Moreover, the smartphone’s back is a smudge magnet and you’ll rarely ever manage to keep the Nova 3i in a pristine condition. Lastly, you’ll have to handle the smartphone with extreme care too, or risk shattering the display or its glass back. 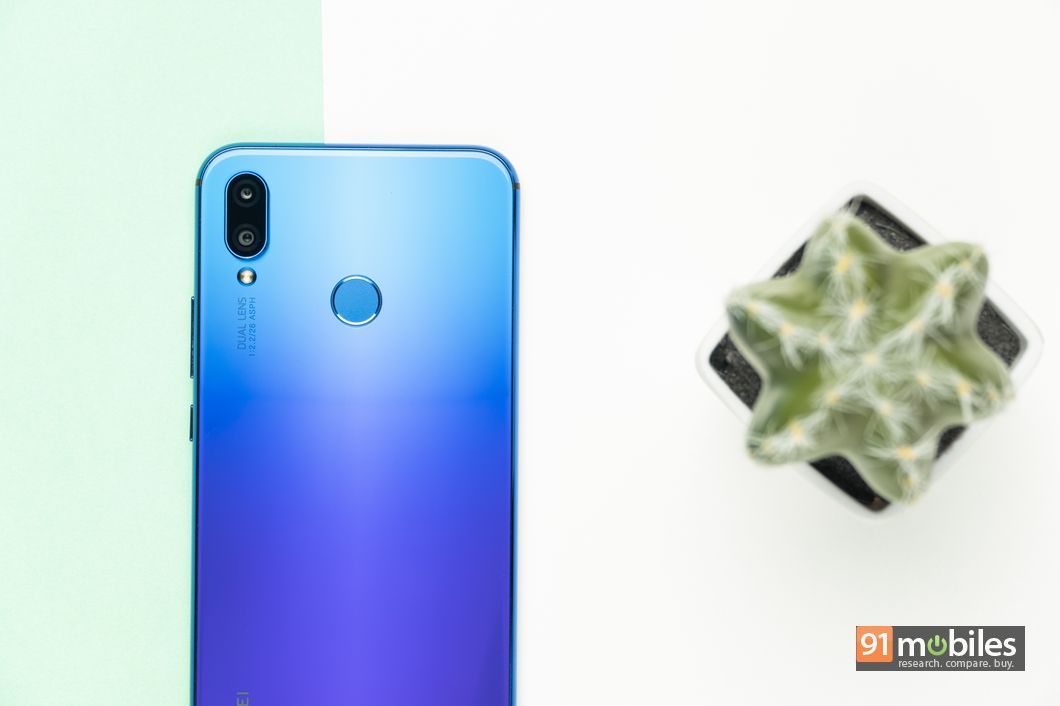 Towards the back, you’ll find a fingerprint sensor on the Nova 3i, which is rapid and extremely accurate. Much like its pricier sibling, the smartphone also gives you the option of unlocking it by means of facial recognition. That being said, the smartphone’s facial recognition is a bit finicky especially when you’re using it to unlock the phone in dimly-lit environments. 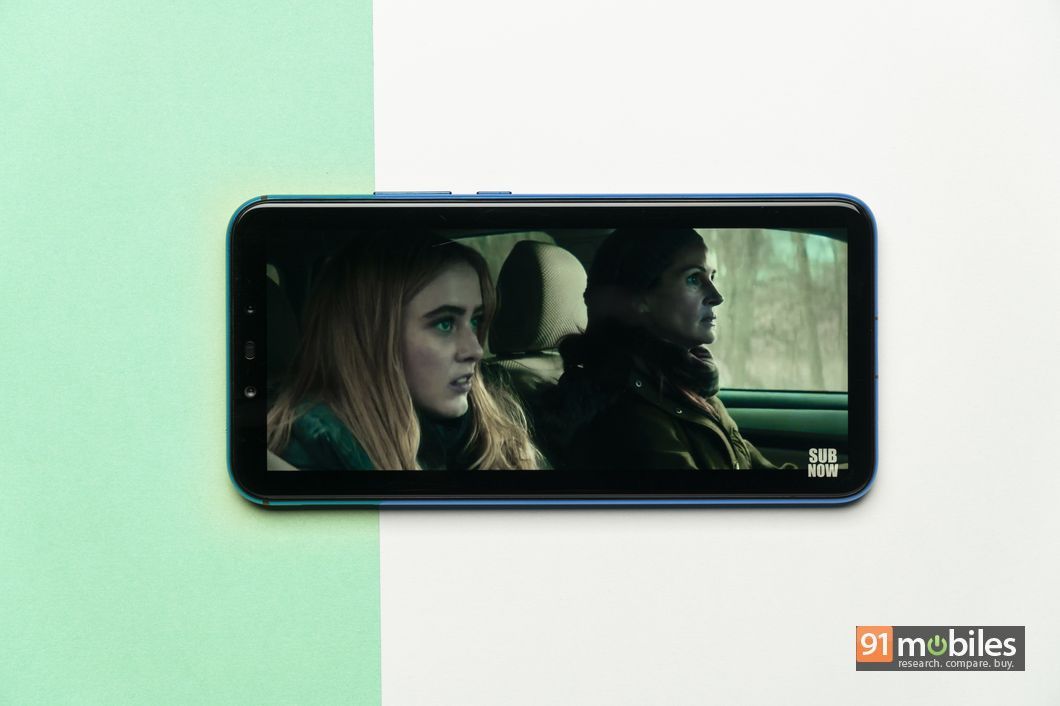 We were immensely satisfied with the quality of the Nova 3’s display and consequently, we have no complaints with the panel on the 3i either, as it uses the same 6.3-inch FHD+ IPS unit with a pixel density of 409ppi. Be it the viewing angles, the display’s colour reproduction or the peak brightness levels, we spent hours glued to it to watch Netflix and YouTube. 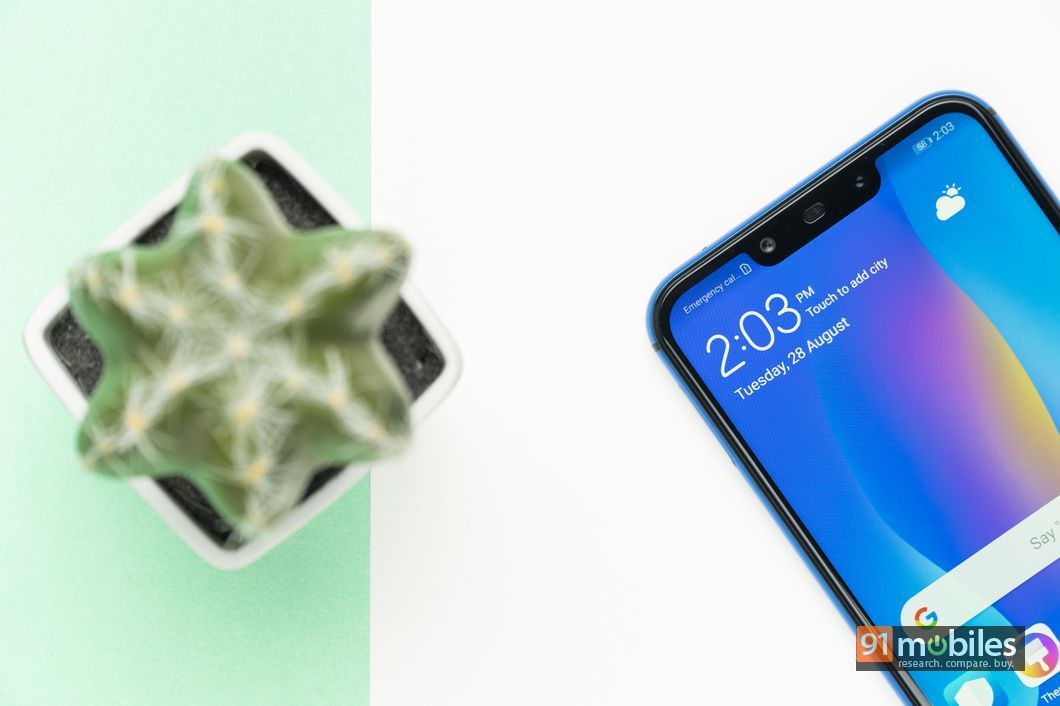 How often do you fix your hair, extended your arm and smile at your smartphone’s front camera? Well, if it’s a lot, then you might find the front camera of the Nova 3i somewhat disappointing. The handset comes equipped with dual 24MP and 2MP shooters on the front, which are capable of clicking some really good self-portraits. Unfortunately, during our testing, we noticed that most of the pictures we took with the device were overexposed. That said, if you manually control the exposure by tapping on the viewfinder, you can get some really pleasing results. Moreover, you can get away with good-looking selfies at night too, provided you use the smartphone’s screen flash functionality, which lights up the display to cast light onto your face. 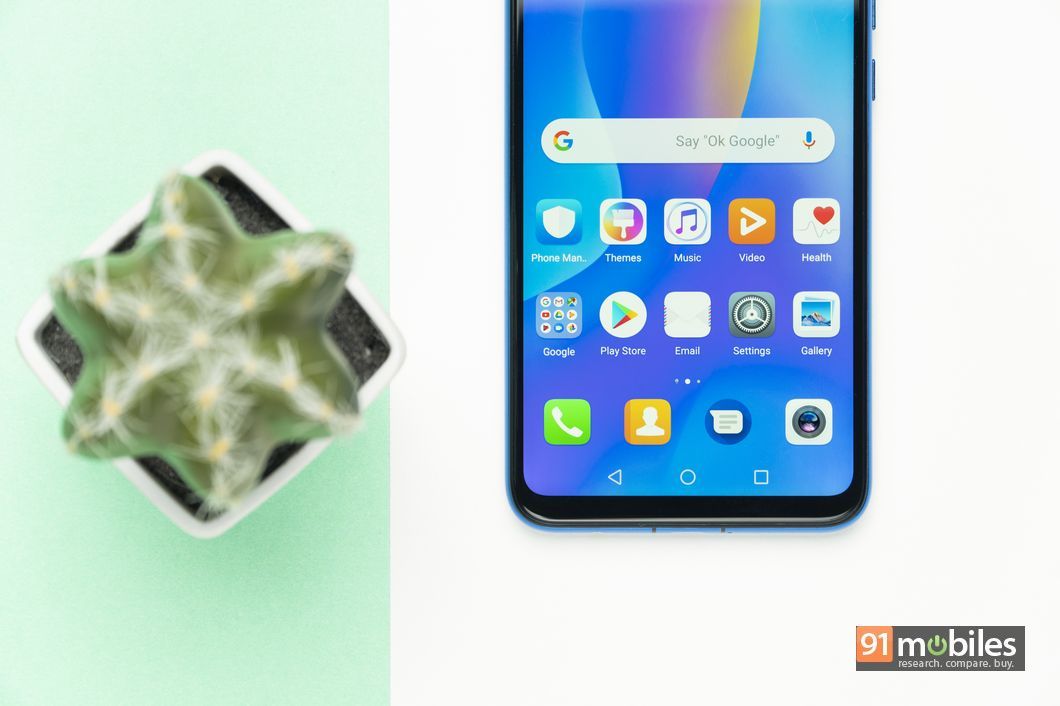 Much like the Nova 3, the Huawei Nova 3i ships with a skin of EMUI based on Android Oreo out of the box. During our testing, we got a software update which enabled a ‘ride mode’ on the device. However, other than that, the rest of the software features are the same across the two models.

What differentiates the Nova 3i from the Nova 3 is the processor backing it. Underneath its all-glass chassis, the 3i is powered by Huawei’s brand-new HiSilicon Kirin 710 processor, which coincidentally is also the company’s first 12nm chip. With the processor, the company is hoping to rival Qualcomm’s Snapdragon 660 processor and Snapdragon 845 processor which can be found on the likes of the Xiaomi Mi A2 (first impressions) and the POCO F1. Other hardware specs of the Huawei Nova 3i include 4GB of RAM and 128GB of built-in storage. 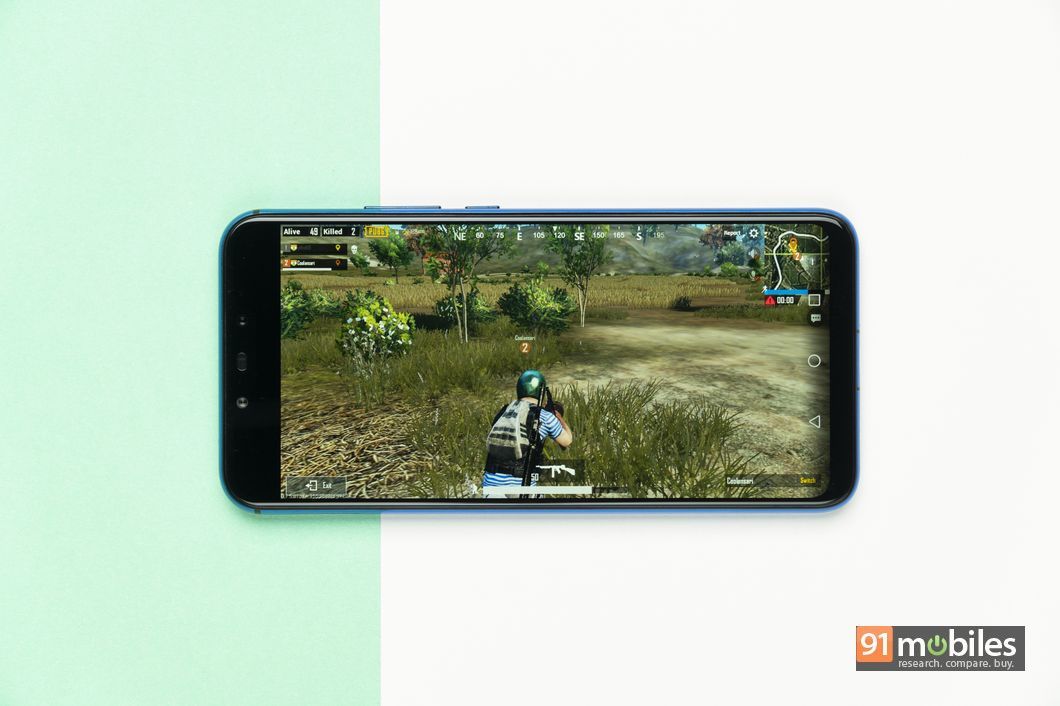 In terms of daily usage, the handset managed to meet our expectations and was able to open applications and multitask between them quickly. We did come across slight stutters every now and then, but that didn’t mar the experience of using the smartphone all that much. Unfortunately, the gaming performance of the processor is quite underwhelming and even with the graphics set to medium on PUBG, we noticed that the smartphone struggled to give us playable frame rates. We guess that the smartphone’s heavy custom skin has something to do with this, as it utilises a lot of system’s resources. All in all, the processor holds up well and will not give you much to complain about as long as you keep your gaming urges in check. 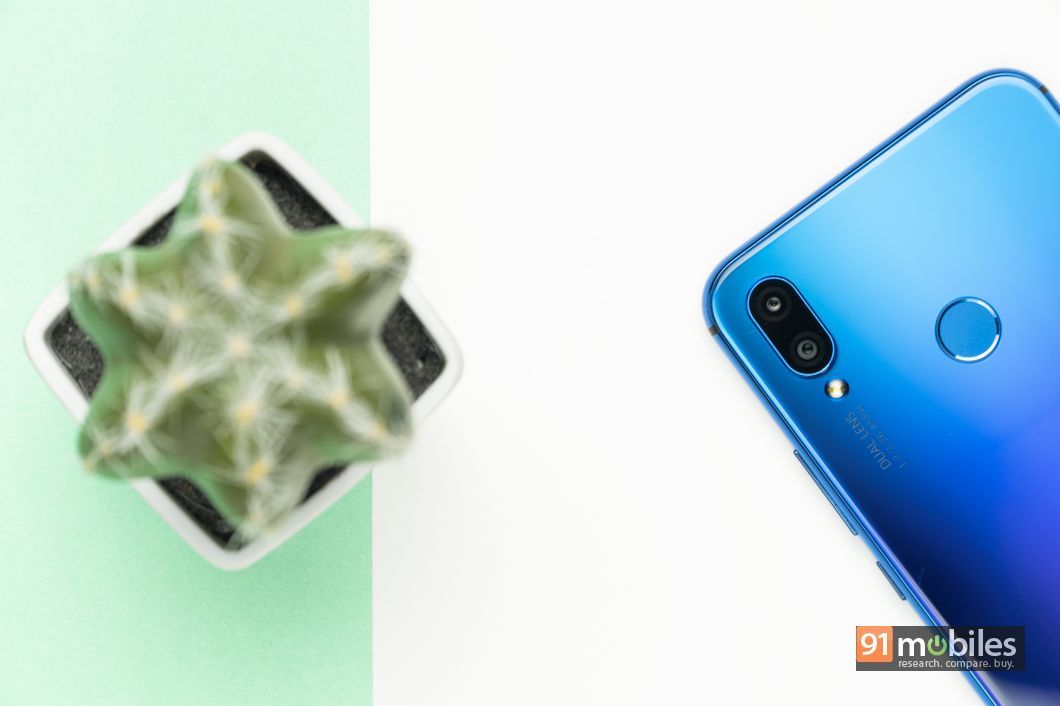 The rear camera setup has also seen a change on the Nova 3i and you get 16MP and 2MP dual sensors at the back of the device. The primary camera setup of the smartphone looks quite promising and the smartphone allows you to click light paintings, make time-lapses or record videos in full HD resolution at 60FPS or capture slow-mo footage at 480FPS. 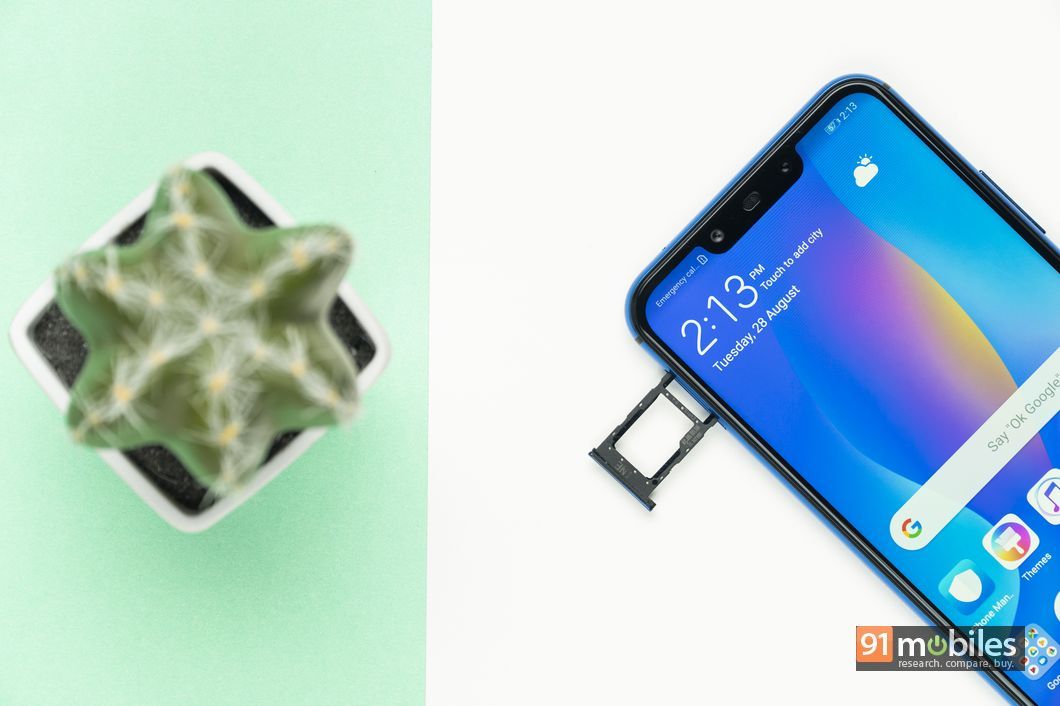 During our testing, we found the rear camera module of the smartphone to be quite capable, although it is a tad bit finicky with the exposure. Provided you can manually tweak the exposure settings from time to time, you will be able to get away with a good looking shot with pleasing colours and decent dynamic range. You also get the option to make the colours pop a lot more by enabling the company’s Master AI mode too. Now, the only issue we had with the images was that while they looked brilliant on the smartphone’s display, landscape shots lost a good amount of details upon zooming in, making it difficult to crop a scene.

Huawei Nova 3i camera samples
1 of 12

As far as closeups go, so long as you can get the smartphone to latch on the subject, you’ll be able to capture a really good shot with a natural bokeh. The low-light performance of the smartphone is not extraordinary by any means, but you can get a share-worthy picture at the very least. The images I clicked with the phone at night looked good at first, but there was considerable noise upon zooming in. As for video recording, I was quite impressed with the smartphone’s ability to record slow-mo videos, but there’s little-to-no margin for error as it records videos for a fraction of a second and therefore, you’ll have to time the shot perfectly.

The Huawei Nova 3i retails for Rs 20,990 and for the price, you’ll get a gorgeous smartphone with a high-quality display and an excellent battery life. On the downside, the handset’s price puts it in contention with the Honor Play (review), the Xiaomi Mi A2 (review) and the recently unveiled POCO F1 (review), all three of which ship with significantly more powerful processors in the form of the Kirin 970, the Snapdragon 660 and the Snapdragon 845 respectively. 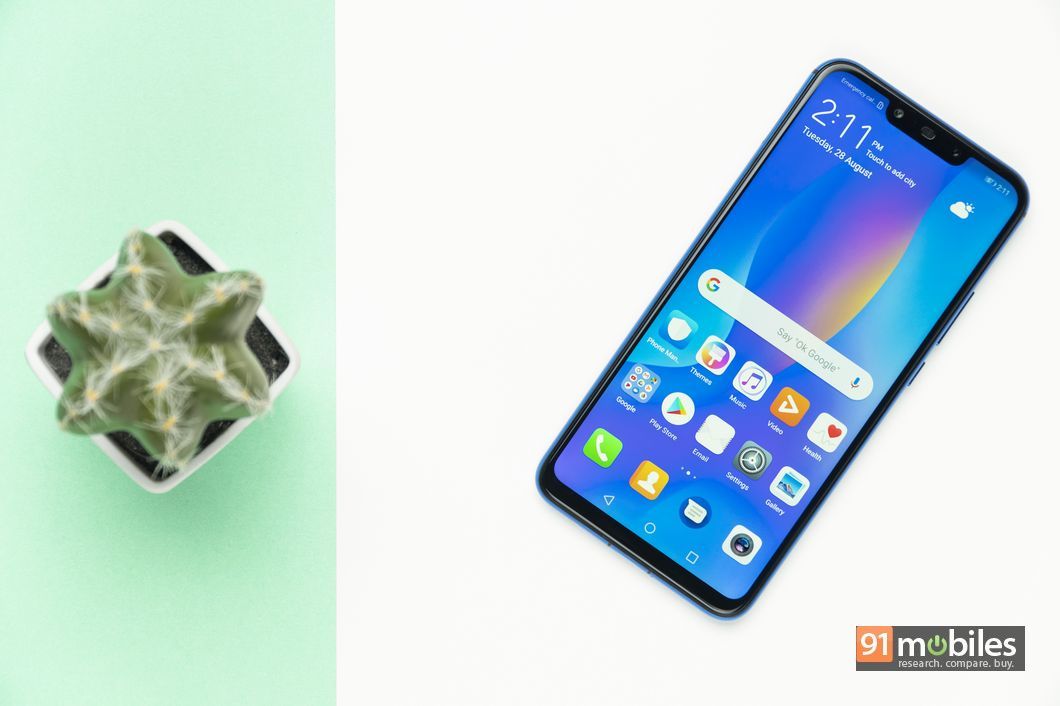 Making matters worse for Huawei’s offering is the fact that both the Xiaomi Mi A2 as well as the POCO F1 click significantly better images from the front as well as the rear cameras. Moreover, you can cop the base variant of the POCO F1 for the same price as the Nova 3i, and the former is a better package altogether.

Consequently, while the Nova 3i is a decent smartphone, it’s overshadowed by more compelling offerings from the competition and the company’s own subsidiary Honor.