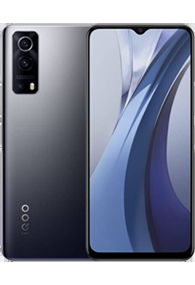 iQOO seems to have come out swinging this year with two excellent flagship killers in the form of the iQOO 7 (review) and the iQOO 7 Legend (review). I reviewed both the phones and rest assured, the devices continue to be my go-to recommendations for anyone looking to buy quality handsets in the Rs 30-40K price segment. 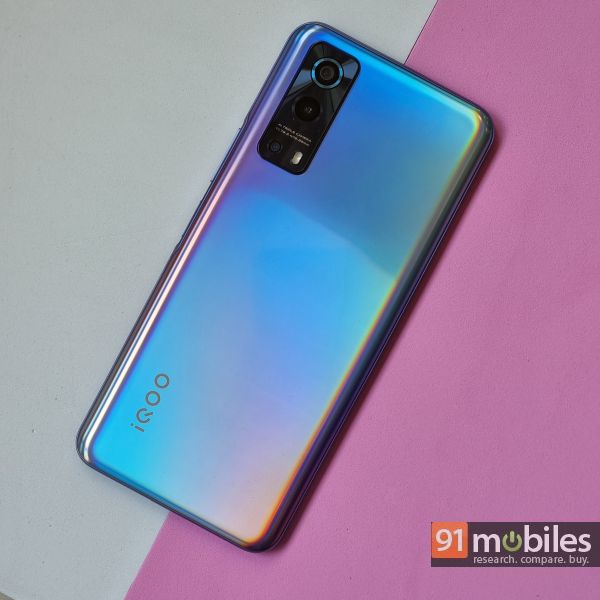 That said, folks at iQOO don’t just want to sit on their laurels and are now gunning for a piece of the volume business with their latest offering – the iQOO Z3. Launched in the gruesomely competitive affordable segment, the iQOO Z3 brings a slew of never-seen-before features and specs, chief among them being Qualcomm’s brand-new Snapdragon 768G processor. But, is that enough to fend off competition from its rivals? Let’s find out in this review.

The iQOO Z3 is a well-rounded phone that’ll surely stir things up in the affordable segment. The smartphone’s Snapdragon 768 SoC helps it stand out in terms of pure performance, and the 55W fast charging is also quite handy. However, users big on consuming media on the go might want to look at other options too, considering the Z3 offers a run-of-the-mill LCD screen and a modest audio setup.

iQOO knows a thing or two about designing good-looking phones. Although the company’s latest contender sports a plastic back, the device still looks quite good thanks to its attractive gradient hue. What’s more, unlike some other competing handsets, the iQOO Z3 comes toting a matte finish on the back which keeps smudges at bay. Coupled with the company’s minimalistic branding and the unit’s unobtrusive camera module, the iQOO Z3’s aesthetics will undoubtedly please prospective buyers. 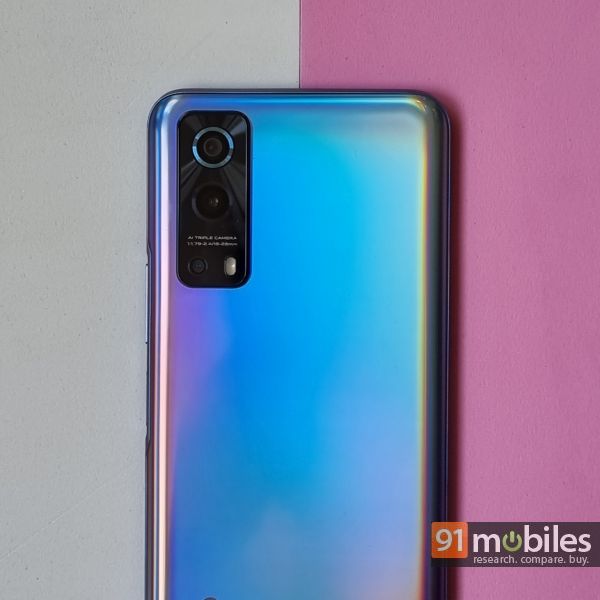 Now, the iQOO Z3 is held together by an aluminium frame, and the band encroaches beyond the handset’s curvy back ever so slightly, making it a tad rough to the touch. Moreover, the handset’s camera module does protrude outwards faintly, making the device wobble when positioned on a flat surface. That said, the smartphone’s weight distribution was to my liking and I could comfortably use the phone with one hand, which can be accredited to the unit’s flat bottom. Speaking of which, you can actually balance the phone upright on a flat surface, which is a neat party trick in my opinion. 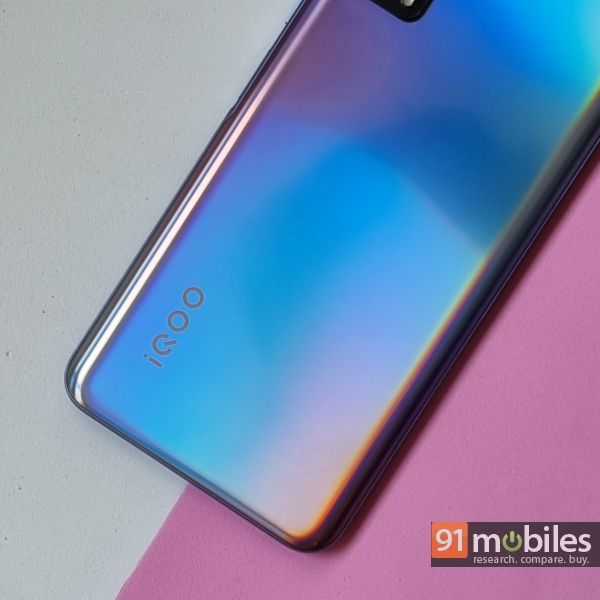 Adding to the list of pros, the iQOO Z3 also features a headphone jack at the bottom, positioned beside the USB Type-C port. That said, the handset doesn’t feature any Hi-res certification, nor does it ship with a dual-speaker setup. So, if you’re big on high-fidelity audio playback, or like to watch movies on a phone, then devices like the Redmi Note 10 Pro Max (review) will undoubtedly offer a better audio setup to boot. Moving on though, the iQOO Z3 features IP52 rating, so it should survive the occasional splashes of water. The company has also furnished the display on the phone with a Corning Gorilla Glass equivalent Panda glass that should limit scratches and scuffs to a certain degree. 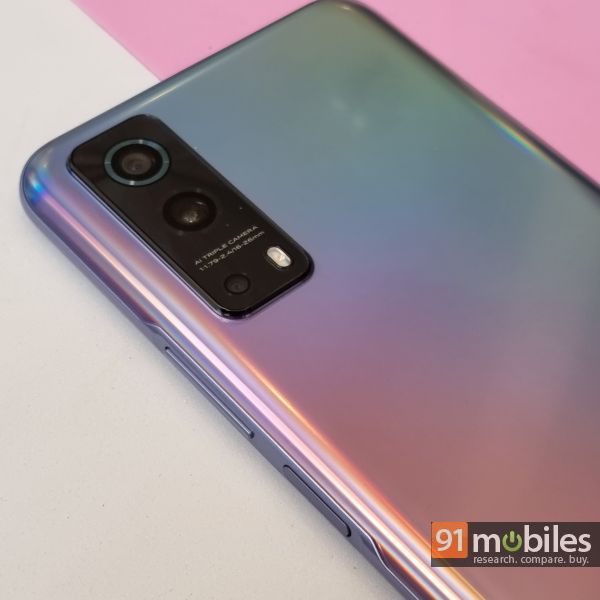 Moving on, much like the Redmi Note 10 lineup, the iQOO Z3 ships with a side-mounted capacitive fingerprint sensor too. The latter worked flawlessly during my testing and is easily amongst the speediest fingerprint sensors I’ve tested to date. The facial recognition tech worked just as well too, though the accuracy did take a steep dip in darker environments. Regardless, the iQOO Z3 will waste no time in getting you inside your home screen. Unfortunately, the smartphone’s haptics leave a lot to be desired and I didn’t appreciate the motor’s mushy feedback in the slightest.

Display-wise, the iQOO Z3 features a 6.58-inch, FHD+ LCD panel that refreshes at 120Hz. Now, granted, the display onboard the iQOO Z3 would have benefited immensely from AMOLED technology. However, that’s not to say that the smartphone’s screen is bad. As such, the panel’s colour reproduction sways in favour of authentic tones, the viewing angles are decent and the screen gets adequately bright at 460nits too. If anything, I think the company could’ve trimmed down the bottom bezel and opted for a smaller, more discreet notch. As things stand, the iQOO Z3 – from the front – looks straight out of 2018 with its waterdrop notch. 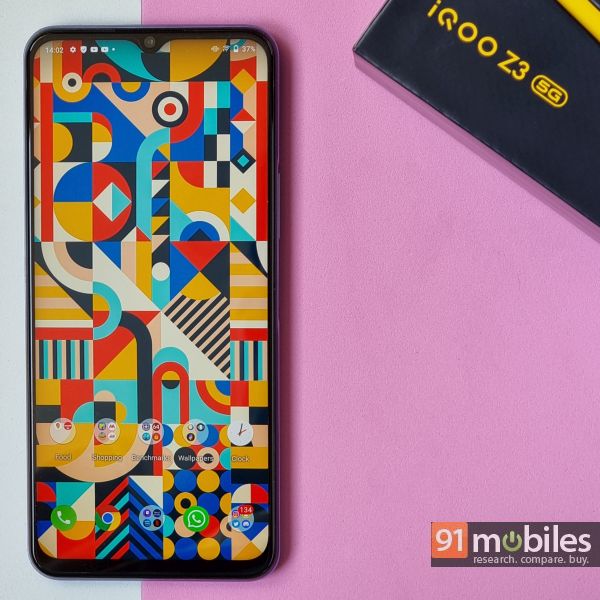 Thankfully, the company does allow buyers to switch between three different refresh rate presets including 60Hz, 90Hz, and 120Hz. Of course, you would want to keep the phone at 120Hz for the smoothest animations, though reducing the refresh rate could net you better battery life. Unfortunately, despite the company’s claims, the handset doesn’t support HDR playback from OTT services like Netflix. I came across this anomaly when I reviewed the iQOO 7, as well as the iQOO 7 Legend, both of which touted HDR10 certification too albeit could only relay streams in HD quality. Rest assured, iQOO really needs to go back to the drawing board and address this issue. 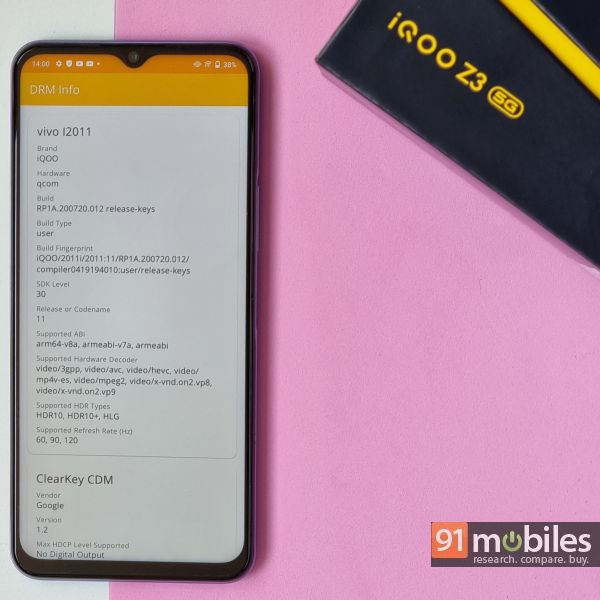 Lastly, if you plan on playing a lot of games on your next phone, then you should take note of the iQOO Z3’s 180Hz touch sampling rate. It’s not the most responsive display in the market, but it should suffice for most mobile gamers.

Off-late, there’s been an influx of compelling camera phones in the affordable segment. Devices like the Redmi Note 10 Pro Max and the Mi 10i are testament to the fact that buyers no longer have to splurge too much on a smartphone to get a quality photography experience. So, how does the iQOO Z3 fare in this regard? Well, before I talk about that, let’s get the camera specs out of the way first. 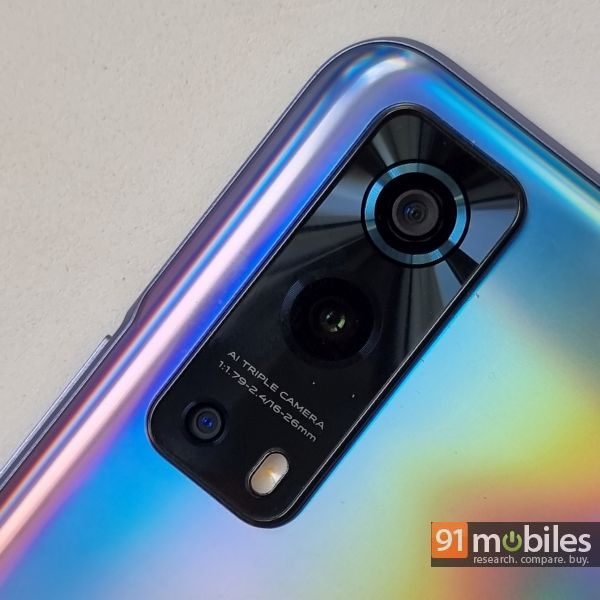 The iQOO Z3 makes use of Samsung’s ISOCELL GW3 64MP sensor, which can also be found on the Redmi Note 10 Pro. The device also comes equipped with an 8MP ultra-wide angle lens and a 2MP macro shooter. For selfies, users will be greeted with a 16MP front-facing camera. Coming to the quality of the images, the iQOO Z3 can click reasonably sharp photos during the day with ample details. That said, the colours usually sway towards punchier tones, so you’ll notice the greens and the blues to look a bit more vibrant. In the shots attached below, you’ll notice a couple of things – 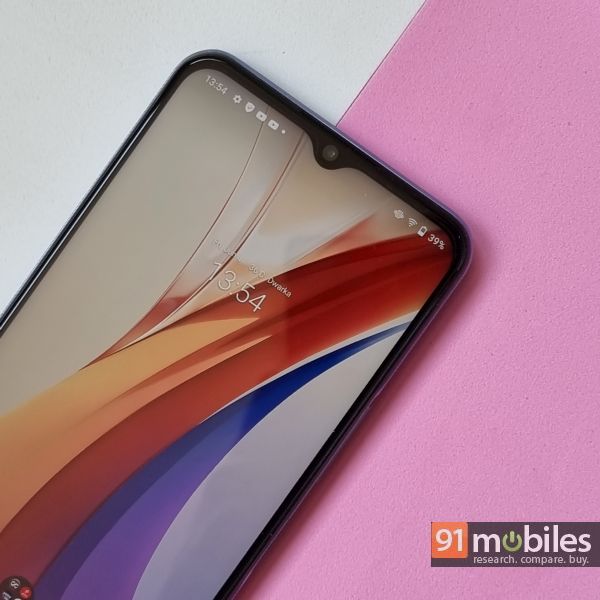 The iQOO Z3’s claim to fame is that it’s backed by Qualcomm’s brand-new Snapdragon 768G SoC. For the uninitiated, the chipset comes as the successor to the Snapdragon 765G processor (found on devices like the OnePlus Nord), and the newer SoC touts 15 percent improved CPU performance over its predecessor. And, sure enough, the SoC is a star performer and offers superior computing prowess than most, if not all mid-range chipsets, the likes of which include MediaTek’s Dimensity 800U processor, Qualcomm’s Snapdragon 732G, and 750G SoCs, and more. 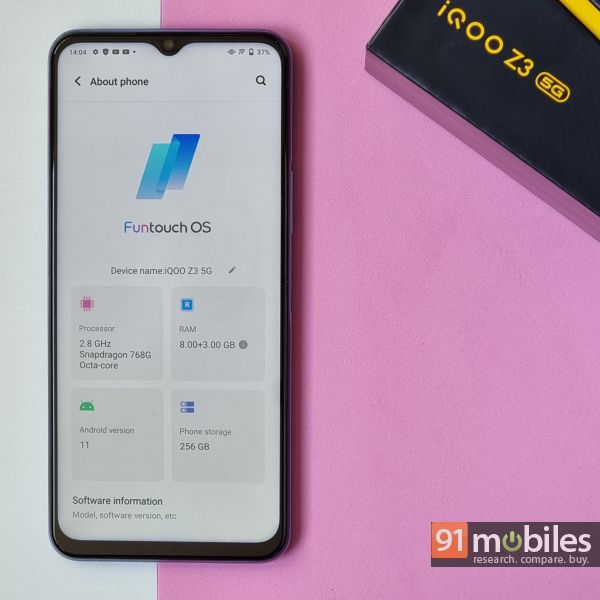 To give you a better picture, the smartphone outputted 4,47,283 points in Antutu benchmark, which is the highest I’ve seen from a 7-series chipset yet. Similarly, the device performed admirably in GeekBench too, outputting single-core and multi-core scores of 723 and 2,040 points respectively. Turn the page over to more demanding tasks, such as running graphically-intensive titles like Call of Duty Mobile and you’ll find very little to complain here as well – the handset offered stable performance for extended periods and that’s with the GQ set to High and the frame rate set to Very High presets respectively. I even subjected the SoC to strenuous continuous loads by running the CPU throttle test for a duration of 30 minutes. While I did notice some spikes initially, the SoC managed to sustain its peak performance well into the thirty-minute mark, which is great.

Now, much like its pricier siblings, the iQOO Z3 also ships with a couple of gaming-oriented features, including a Gaming Assistant which clears up system resources and allows users to mute notifications whenever they launch a game, among other things. More importantly, the device features an Eagle-Eye view mode which per the brand, enhances the visuals to give gamers more clarity whilst ADS-ing. In practice, I didn’t notice a huge difference and the feature merely upped the vibrancy of colours on the screen. 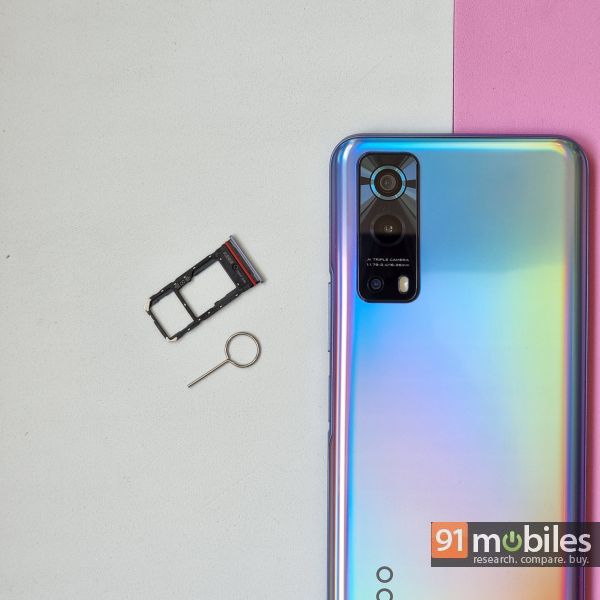 I should point out that rendering animations at 120Hz is quite taxing for the SoC, which was evident when I used devices like the Redmi Note 10 Pro Max too. In fact, the UI animations on most budget phones would jitter every so often, but I am yet to come across the same issue on the iQOO Z3. Simply put, barring the POCO X3 Pro (review) – which ships with Qualcomm’s Snapdragon 860 processor – no other handset can hold a candle to the iQOO Z3 in the performance department under Rs 25K. 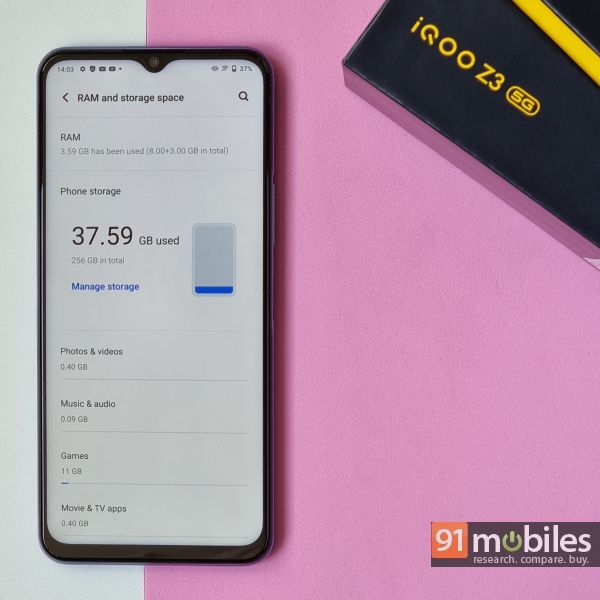 Thankfully, the same can be said for the phone’s connectivity features as well, and I got stellar upload and download speeds on my Airtel postpaid SIM with the handset in Delhi NCR. The device supports both 2.4GHz and 5GHz Wi-Fi bands too, which is great. And, for those curious, the handset is 5G ready and supports N77 and N78 sub-6GHz bands too.

Software-wise, the iQOO Z3 ships with the company’s FunTouch OS v11 on top of Android 11. The custom skin takes cues from stock Android and as such, doesn’t feel cluttered or clunky. That said, the UI ships with a ton of bloatware and duplicate apps, most of which can’t be uninstalled. 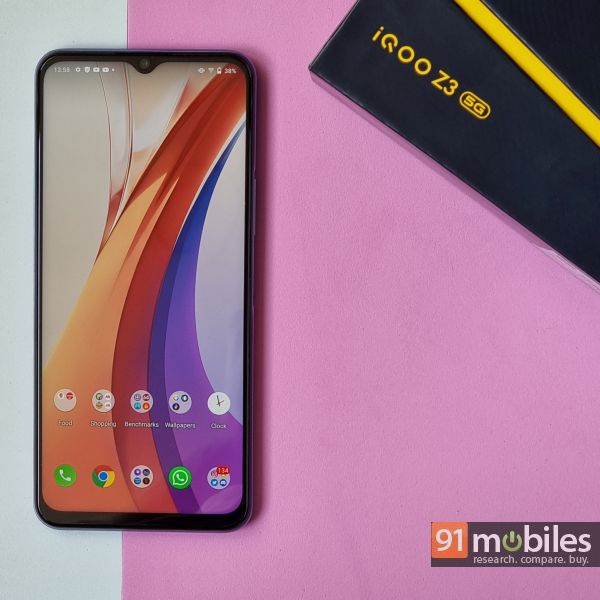 Furthermore, at the expense of sounding like a broken record, the custom skin doesn’t offer a whole bunch of customisation features or baked-in utilities either. Suffice it to say, FunTouch OS v11 still needs a lot of work but the custom skin is undoubtedly showing immense promise. 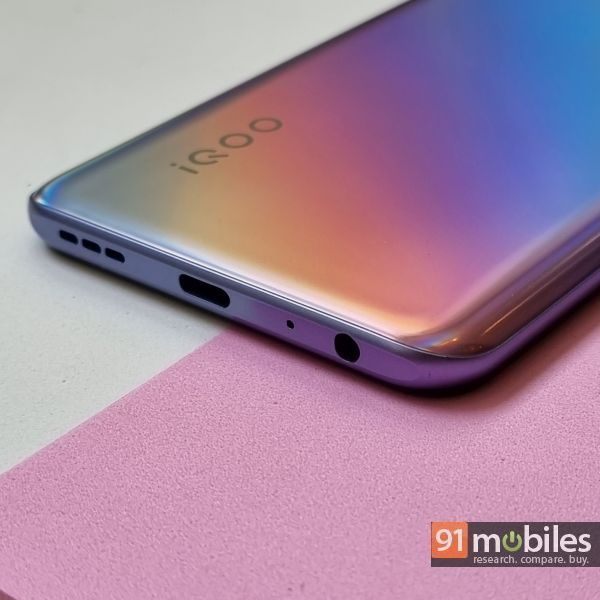 The iQOO Z3 ships with a 4,400mAh cell which, with the display set to 120Hz, should last you a full day on moderate usage. That said, power users need not worry as the phone ships with a 66W brick which can fast-charge the device rapidly. Now, bear in mind that the phone only supports 55W charging but that’s still plenty fast for most users. In fact, in my testing, I could refuel the phone from 0-50 percent in just 20 minutes, with a full charge taking a little over 40 minutes.

iQOO is quickly becoming a force to be reckoned with in the Indian smartphone market. The company hit the ball out of the ballpark with the iQOO 7 and the iQOO 7 Legend and now, has launched a compelling device to appease budget-conscious buyers too. To that note, the iQOO Z3 offers excellent performance for its starting price of just Rs 19,990, and the smartphone’s cameras can click quality images as well. What’s more, the device can charge rapidly at 55W, and power users will also benefit from the phone’s 120Hz display immensely.

Of course, iQOO had to cut some corners to bring the price of the phone down and the device’s plastic chassis and LCD screen might raise some eyebrows. So, if you don’t game too much on your phone or care about future-proofing your device for the 5G revolution, then you’d be better off with handsets like the Redmi Note 10 Pro Max. But, bear in mind that the iQOO Z3 offers much better performance to boot, as was evident in our in-depth performance comparison between iQOO’s offering, the Xiaomi Mi 10i and the Redmi Note 10 Pro Max. As such, the iQOO Z3’s well-rounded specs and its aggressive pricing make it an enticing option in the affordable segment.