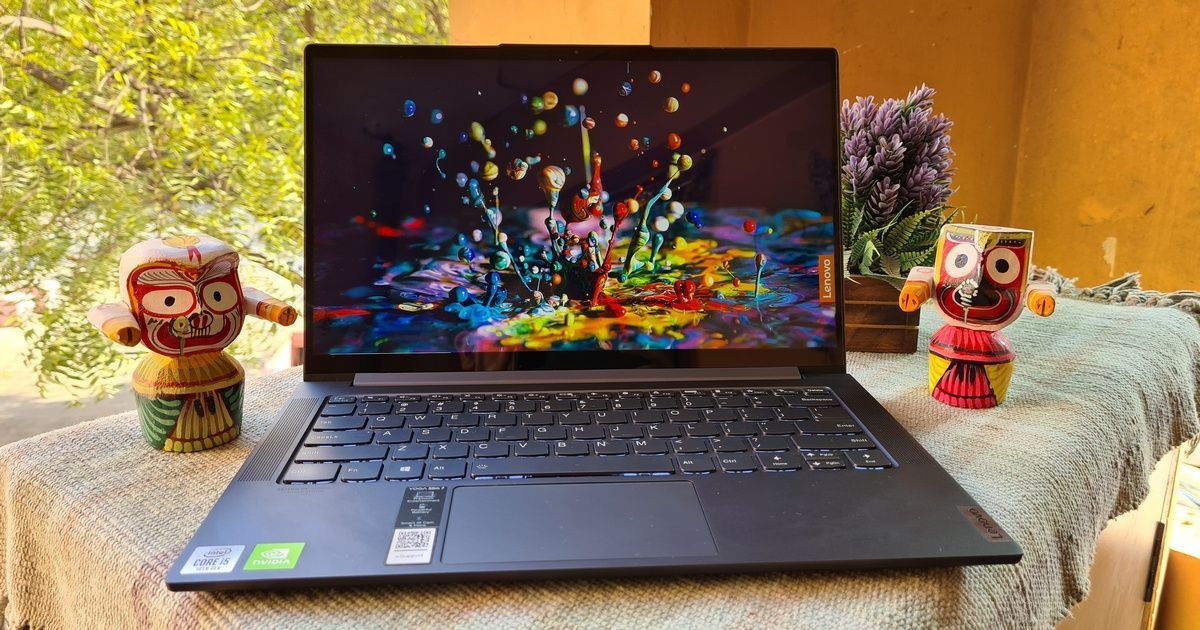 Lenovo’s Yoga series, which consists of 2-in-1 laptops as well as trendy everyday work machines, are portable yet pack in a punch. The company announced an update to its Yoga Slim 7 series to include some of the latest silicon from Intel and also pack in an NVIDIA GPU for some moderate graphical tasks. I have the Yoga Slim 7i with the Intel i5 10th-gen CPU for review and it retails for a starting price of Rs 79,990. There is an i7 version of the device but I have a feeling that the former is something that consumers would have more of an interest in. Let’s get into the details of the Yoga Slim 7i to see how it fits into Lenovo’s ever-expanding portfolio of products, and more importantly, whether it deserves your hard-earned dough or not. 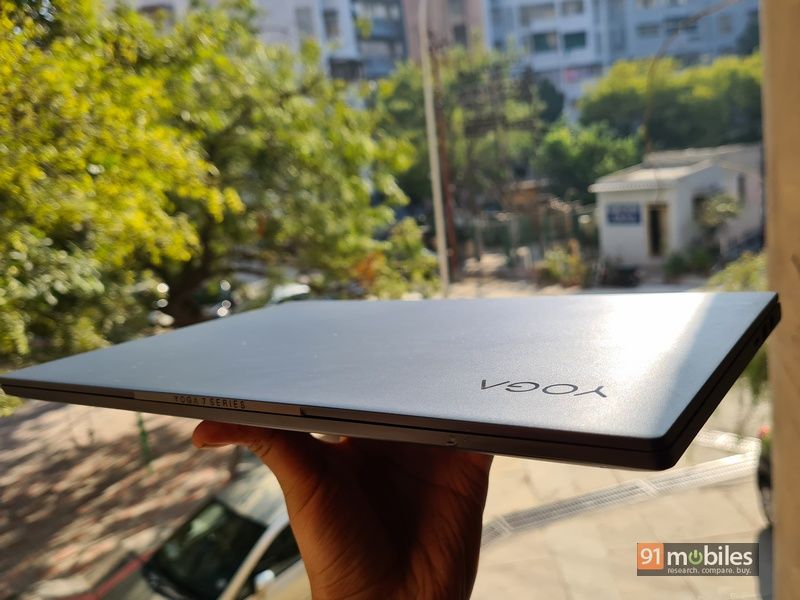 Right off the bat, I have to say that I’m a fan of Lenovo’s sturdy construction of the Slim 7i. The metal unibody chassis does lend some weight to the laptop but offers rigidity such that there is zero flex anywhere on the body. The exquisite Slate Grey colour scheme is carried over to all parts of the laptop including the lid, underside, and the rails. While the compact form factor does cramp in the keyboard, Lenovo has still managed to place a 14-inch display inside it thanks to razor-thin bezels on all sides. Slipping the Yoga Slim 7i inside my backpack isn’t an issue and its relatively lightweight design allows me to carry the laptop around with ease. Oh yes, in typical Yoga fashion the hinge construction allows the lid to rotate 180-degrees. This makes it easy to prop up the laptop in any position while I’m snuggled in my bed under a quilt weathering through the cold Delhi winters. The palm rest is flat and the edges could cut into your wrist if you are typing on an uneven surface. The speaker grilles are placed on either side of the keyboard and the webcam is placed on the top bezel surrounding the display. 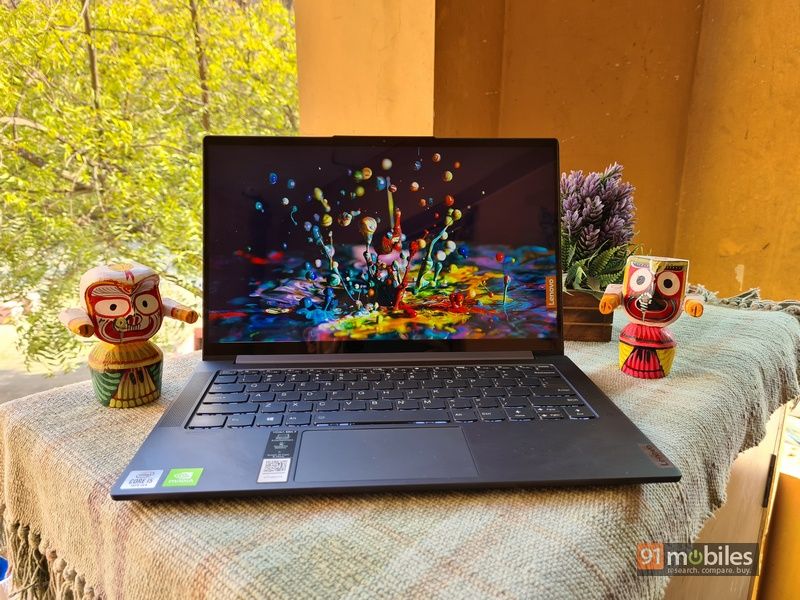 The thin chassis does not compromise on ports and you are getting a healthy selection on the Yoga Slim 7i. On the right is a microSD card slot, the power button and two USB 3.1 Type-A ports. Present on the left is an HDMI port, a 3.5mm headphone jack, and two USB C ports with Thunderbolt 3 and DisplayPort functionality, both of which can be used to charge the device. On the wireless side of connectivity, the device supports Wi-Fi 5 and Bluetooth 5.0. 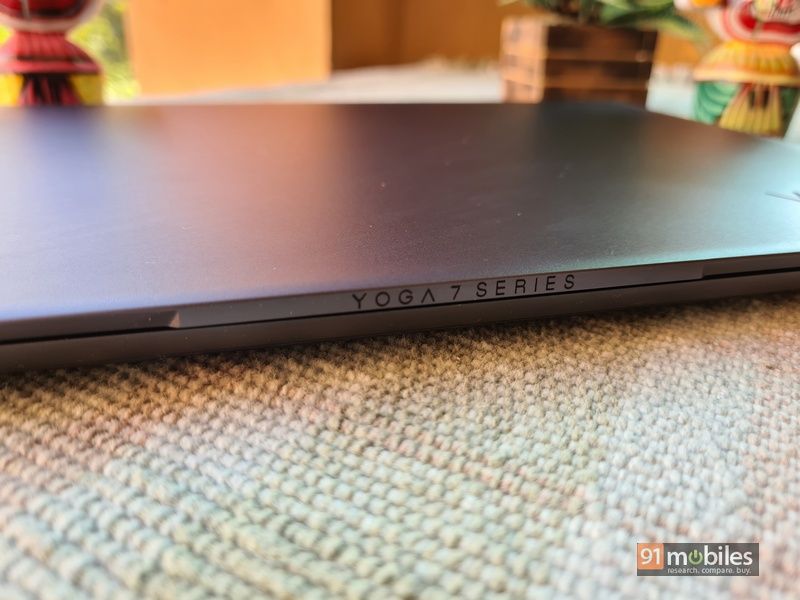 Yoga Slim 7i’s exterior doesn’t look big enough to pack a 14-inch screen unless you open the lid. The IPS LCD panel has FHD (1,080 x 1,920) resolution and a maximum refresh rate of 60Hz. The display itself is quite colourful, punchy, and slightly contrasty in nature. Lenovo mentions that the Slim 7i can have a maximum brightness of 300 nits which isn’t the best in the scheme of things. However, I did manage to draft most of this review while sitting in a park with the sun blazing in all its glory, so I would say that brightness should not be an issue on the device. Apart from that, the laptop is said to also cover 100 percent of the sRGB colour gamut. However my experience has revealed that the panel is decent enough if you want to just stream movies on OTT platforms but not for any kind of colour correction work. All things considered, the Yoga Slim 7i’s viewing experience will be more than enough for your office work and of course video consumption. 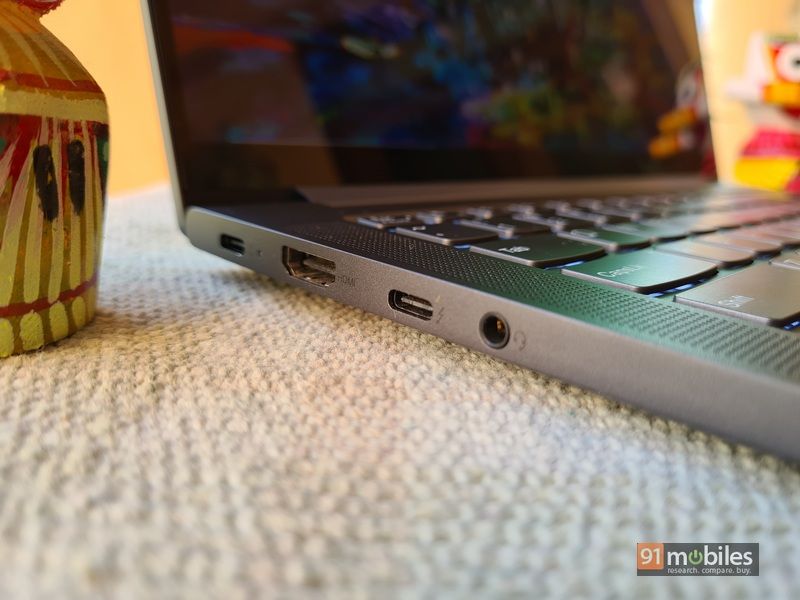 The Yoga Slim 7i’s keyboard is a regular six-row key setup minus the Numpad due to the smaller chassis size. However, the keyboard does not feel cramped at all. In fact, I came from a much bigger, full-sized keyboard on the Dell G5 (review) and my fingers didn’t take any time in getting used to the Yoga Slim 7i’s keyboard. The chiclet-style keys’ travel is optimum and so is the responsiveness while typing. I did sometimes press the apostrophe key while trying to press Enter due to the latter’s short size, but other than that my fingers easily found the desired keys. There are two levels of backlighting on the keyboard and there is minimal bleeding around the keys. 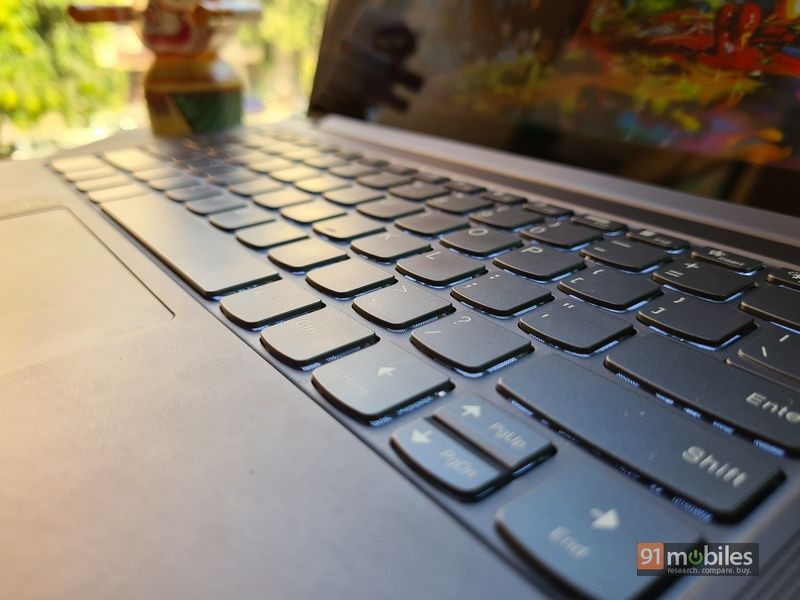 The trackpad, sitting just below the keyboard, is of a fairly good size when you look at how compact the laptop is. My finger glides over the smooth surface while the trackpad’s colour matches the rest of the body. It is also clicky, and the left and right taps are precisely executed. Finger gestures worked well but the on-screen animations lack the fluidity of macOS. Windows Precision drivers are installed which lend accuracy to touch response and lower latency. All-in-all, the Yoga Slim 7i’s keyboard and trackpad are easy and reliable to operate for any kind of work you have to do, professional or otherwise. 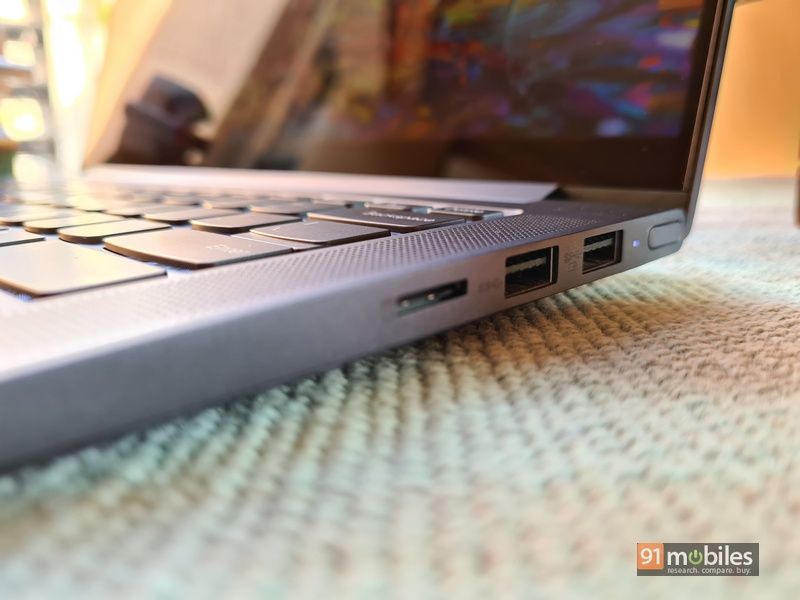 Powering the Yoga Slim 7i is an Intel Core i5-1035G1 chip, which is on the lower-end of the spectrum as far as Intel chipsets go. Part of the silicone maker’s Ice Lake lineup, it is an octa-core CPU that has been made using a 10nm manufacturing process. While it is a 10th-gen chipset, the most you can get out of it is light photo editing, opening multiple apps on Chrome, using Microsoft office and shifting through different apps. You get 512GB PCIe SSD storage and 8GB of RAM, which is just about sufficient for regular usage. The Yoga 7i has not been marketed as a processing powerhouse and for your day-to-day tasks you don’t need it to be. Considering the Yoga Slim 7i’s portable nature, it is pretty much the ideal amount of CPU usage you can expect. Running a couple of benchmarks on the Slim 7i revealed what I was expecting from the device. On Geekbench 5 the laptop scored 1,132 and 3,722 for single-core and multi-core tests which is respectable enough. On Cinebench R23, which does a test of how good the CPU performs under load, the laptop scored 3,160 and 1,116 on multi-core and single-core respectively, both of which are good scores. Finally, I wanted to see how much of a workhorse the laptop is, so I ran PCMark 10’s benchmark and it yielded a score of 4,030 which is just about average. Basically, if you are travelling and need something compact without compromising too much on performance, then the Intel i5 version of the Yoga Slim 7i should meet your needs. The Slim 7i is not a laptop meant to handle heavy graphics. The compact chassis will not allow it. So the fact that Lenovo has gone ahead and put in an NVIDIA GPU is quite reassuring for people who might also want to dabble in casual gaming. The MX350 GPU is obviously not on par with anything from NVIDIA’s GTX series but can accomplish light gaming. I played Valorant and CS:GO on the laptop and saw the device maintain 60fps at medium settings. Obviously, the fans inside the laptop rev up loudly and you might want to keep an eye on how hot the machine gets. Frame rates started dropping after about one hour of gaming due to thermal throttling. Overall you might not be able to play intensive AAA titles but basic graphics tasks can be done. 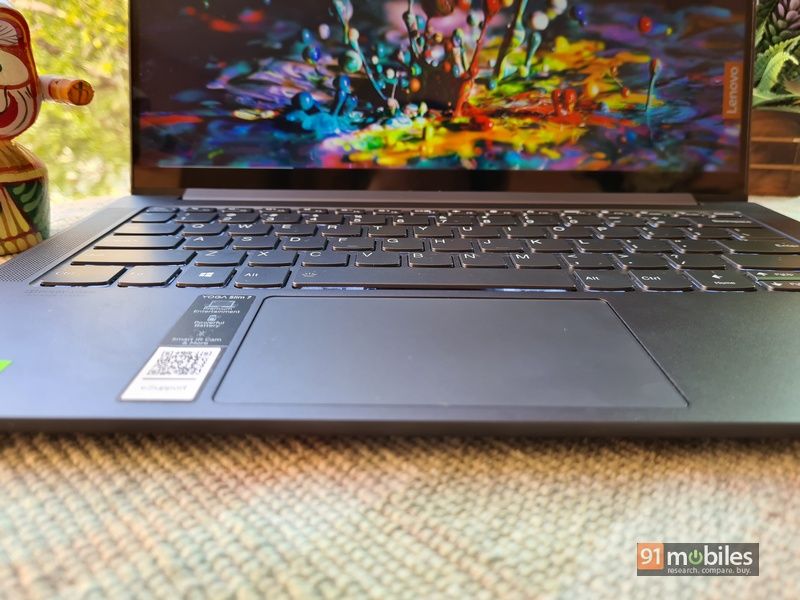 The Yoga Slim 7i has Dolby Atmos speakers and I have to say that they are fantastic. They get quite loud and have good highs supported by thumping bass. Honestly, they might even be the best set of speakers I have heard on a sub Rs 80,000 laptop. The webcam also has an integrated IR sensor alongside it which detects movement. As soon as I sit in front of the laptop, the sensors recognise my face and instantly unlock the device. Of course, you have to have your face registered via Windows Hello, but the sheer convenience of this feature has me quite impressed. There is no fingerprint sensor on the device, but thanks to the snappy authentication being offered by the webcam (which also works quite well in dark conditions), this isn’t really a deal breaker. 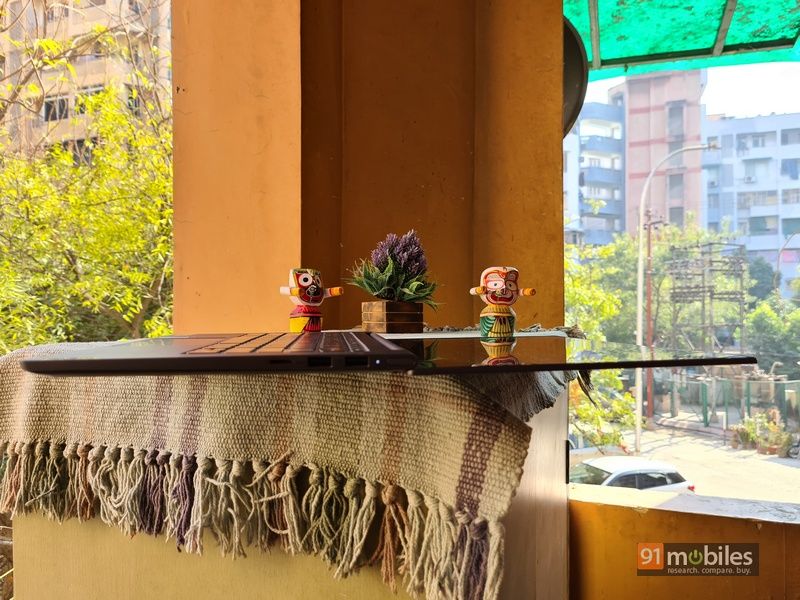 On the battery front, the Lenovo Yoga Slim 7i has a 60.7Wh pack which the company says can last for up to 14 hours. In real life, this translates to around 7 hours of usage, which is not bad for a laptop of its price. My time with the device generally included typing out this review on WordPress, watching some YouTube, keeping a number of Chrome tabs open in the backround and streaming Netflix. As long as you’re not putting the laptop through the metaphorical ringer, the battery will hold out for the entire day. The laptop will take about 2 hours to completely juice up with the standard 65W charging adapter that charges via the Type-C port. This means you can also charge it using your phone’s Type-C charger but that will likely take much longer. 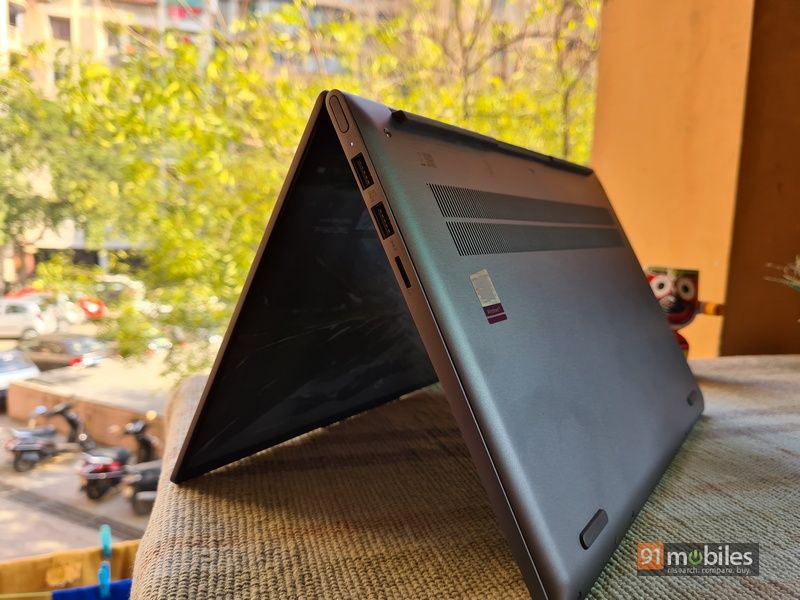 Considering the Yoga Slim 7i’s target audience, it does not find a lot of competition with its Rs 79,990 pricetag. The ASUS Zepyrus G14 (review) (non-Anime matrix) comes to mind, which is a laptop priced at Rs 80,990 and offers an AMD CPU with NVIDIA’s 1650 GPU, along with a class-leading battery backup. It does lack the speakers and the lightweight design of the Slim 7i and is also very much subject to availability. Then you have the Apple MacBook Air M1, which is arguably one of the fastest laptops in its class, but is priced higher at Rs 92,900. Overall, I think that for professional use cases, the Lenovo Yoga Slim 7i serves as the perfect companion thanks to its compact, lightweight design, reasonably good battery life and decent performance.