The Mi Smart Band 6 is Xiaomi’s newest addition to the series that propelled it to the numero uno position in the fitness band segment. This particular segment has been growing over the past few years, but in recent times, have seen countless new options being launched on a very frequent basis by brands both known and unheard of. Staying relevant and competitive, therefore, is tougher than ever before. Does the Mi Smart Band 6 have what it takes? 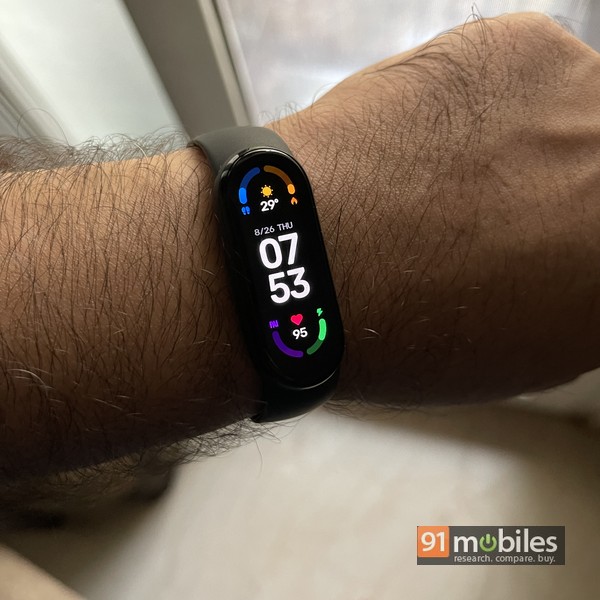 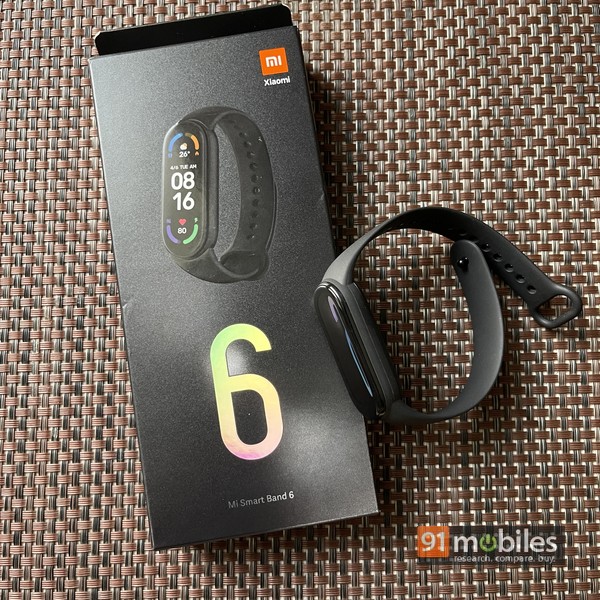 The latest offering sticks to the same design and form factor as its predecessor, the Mi Smart Band 5 (review), which is both a good and a bad thing. Good, because well, the Mi Smart Band 6 is quite comfy to wear over long periods, and even features the same convenient magnetic charging mechanism as the previous model. And bad because the design has started looking a bit dated by now, and possibly needs a bit of a refresh. 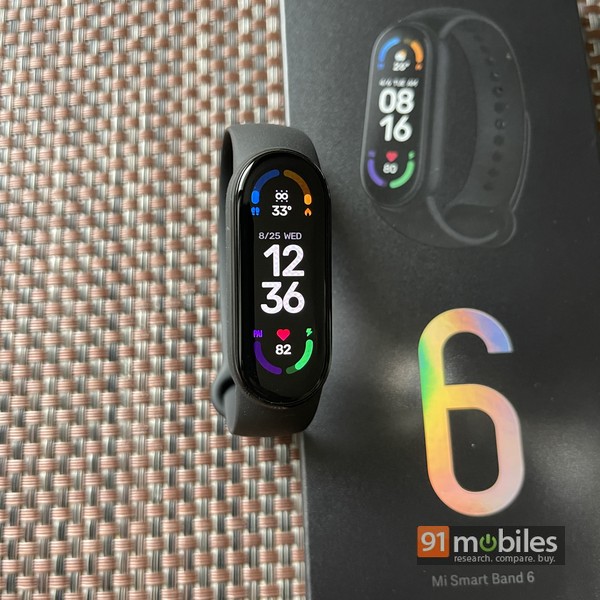 That’s not to say there’s nothing new in the latest model – quite the opposite in fact. The Mi Smart Band 6 comes with a larger screen, up from 1.19-inches in the previous model to a more generous 1.56-inches. The touch-enabled AMOLED display is quite vivid, sharp, and responsive to the touch too, and because of the bigger size, can accommodate more content. Xiaomi has achieved an almost 50 percent bump in screen size by changing the shape of the display, which is now oval-shaped and spans the fascia edge to edge. The overall look of the device, therefore, hasn’t changed, and you get the same capsule-shaped core along with a slim silicone band. You get a black band in the box by default, but you can buy more in different colours from Xiaomi. In fact, the straps that were launched for the Mi Smart Band 5 work with the new model too. 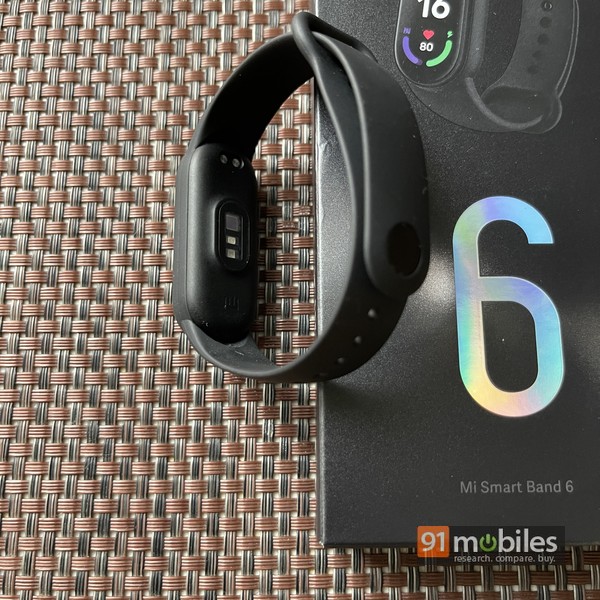 At the back of the device, you’ll see the various sensors and a pair of pins where the magnetic charger hooks up. And while I’m on the subject of design, worth mentioning that the Mi Smart Band 6 is water-resistant up to 50m. 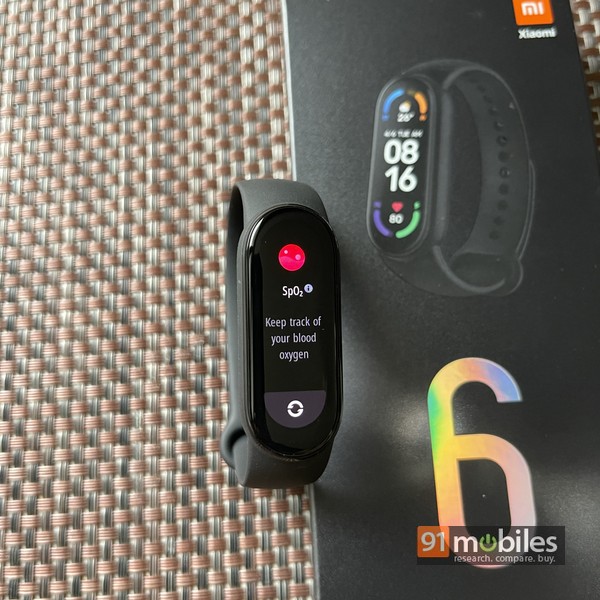 The Mi Smart Band 6 brings forth the same set of features as its predecessor, along with a bunch of new ones. The first and one of the most notable is the addition of an SpO2 monitor, which is a feature that’s been of very high interest during pandemic times… since keeping track of blood oxygen levels has become extremely important. Not just that, there are a bunch of updates on the fitness tracking side too. 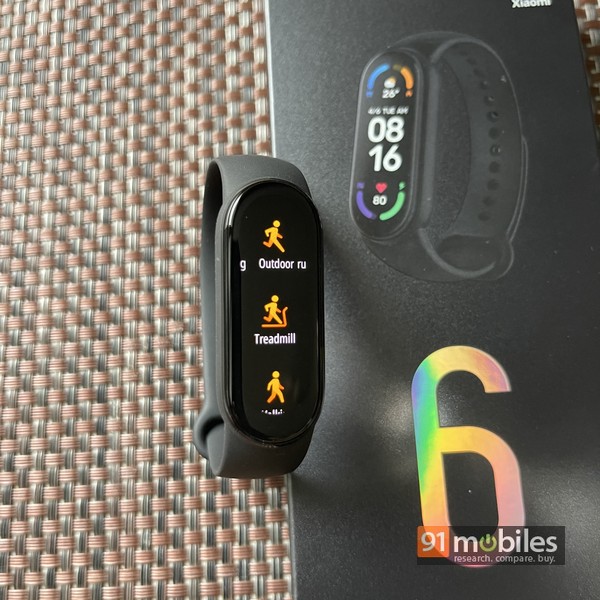 The band supports 30 sports modes, and can auto-detect six of them: walking, outdoor running, treadmill, cycling indoor rowing, and elliptical training. Sleep breathing quality monitoring has been added as well. 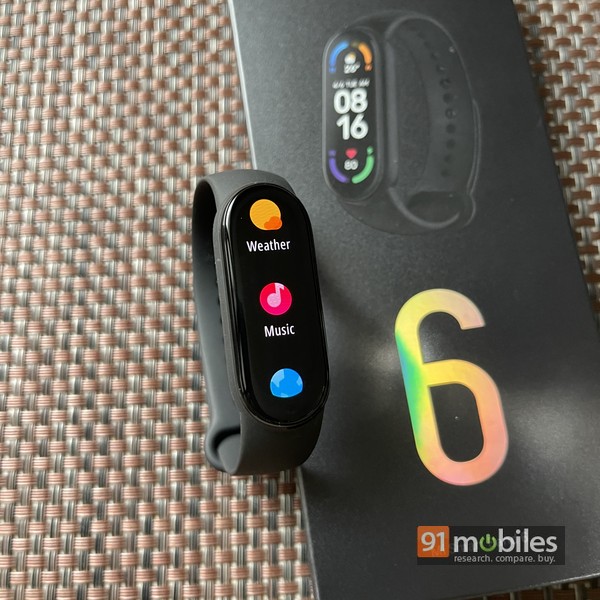 Of course, the Mi Smart Band 6 also offers monitoring of steps taken, continuous heart rate, sleep monitoring with REM, and stress monitoring. It can throw up idle alerts, features breathing exercises, and can even track female health. And as far as the usual functions are concerned, pretty much the entire suite is there – alarms, weather, stopwatch, timers, music control, and remote camera shutter. It’s a comprehensive feature set that looks like it doesn’t miss out on much. I do miss an always-on screen though. 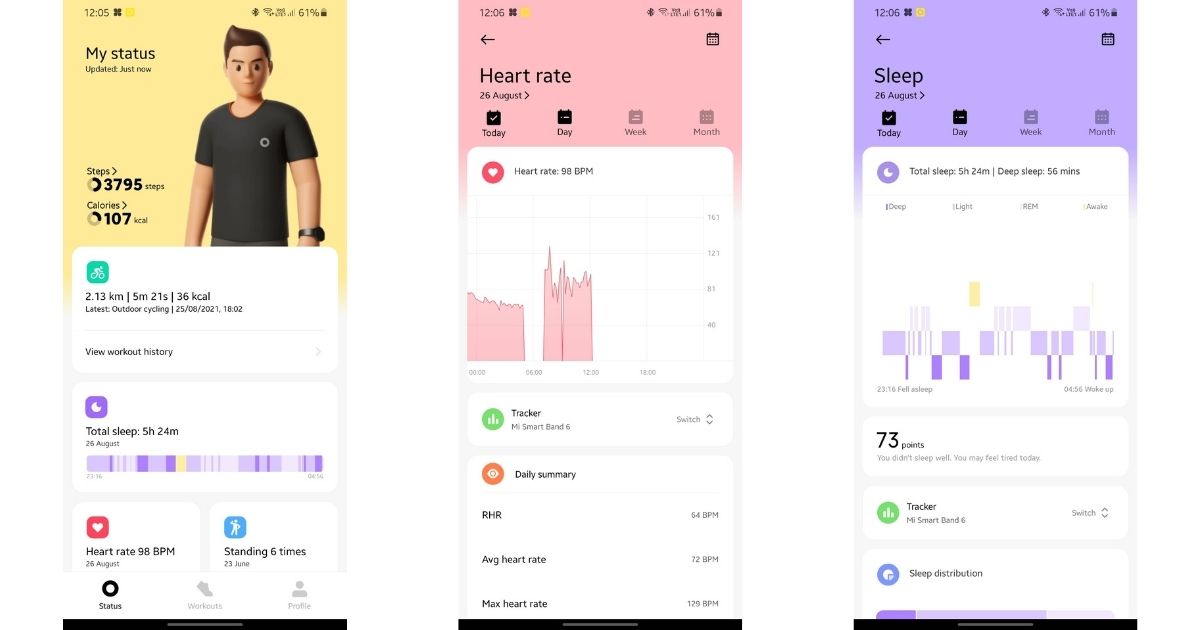 The Mi Smart Band 6 can pair with an Android or iOS phone via the Mi Fit app as usual, but this time, you can alternatively use the Xiaomi Wear app too. In fact, the latter gives you an option to import your data from Mi Fit, which should be useful in case you’ve been using one of the earlier models of the Mi Band. The Xiaomi Wear app is the same one that works with both Mi Watch Revolve and Mi Watch Revolve Active, as well as the Redmi Watch. I’m speculating here, but maybe the brand wants to move completely to the Xiaomi Wear app for its wearables, and this is just the transition phase. 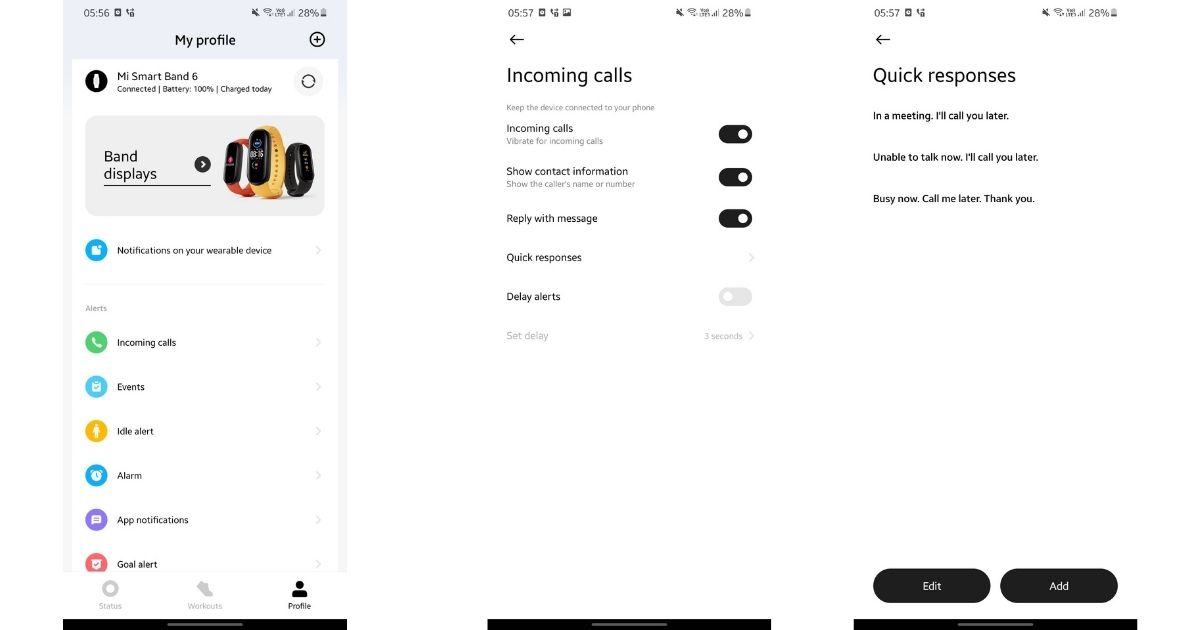 The Xiaomi Wear app syncs with the Mi Smart Band 6 and displays all your data in an easy-to-read format. I faced no issues with pairing or syncing. The app is divided into three main screens, with ‘Status’ showing your activity, ‘Workouts’ to enable specific workout modes, and ‘Profile’ listing your paired devices and allowing to control all the settings for the band. You can enable alerts for incoming calls, set goals, enable app notifications, set alarms and view the battery level of the connected band. And with the Mi Smart band 6, you even get the option to decline incoming calls with a personalised SMS, directly from the device. 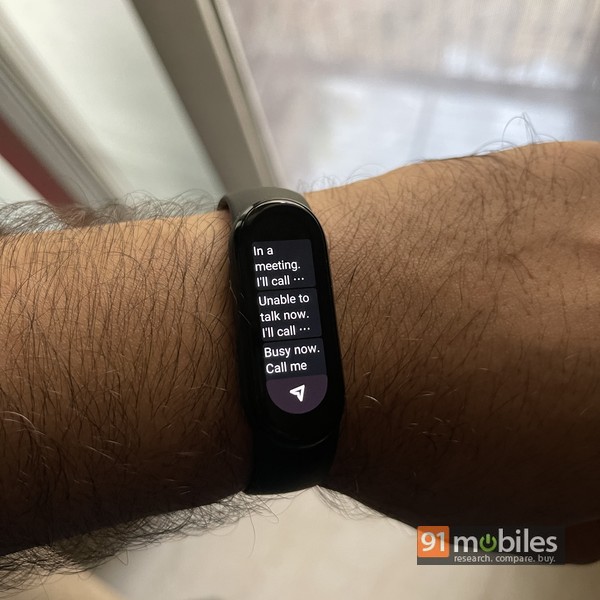 Worth mentioning is the fact that many features, including basic ones like ‘raise to wake’, and advanced ones like all-day stress monitoring, are disabled by default. You’ll need to dive settings to enable them, and some of them are buried quite deep. 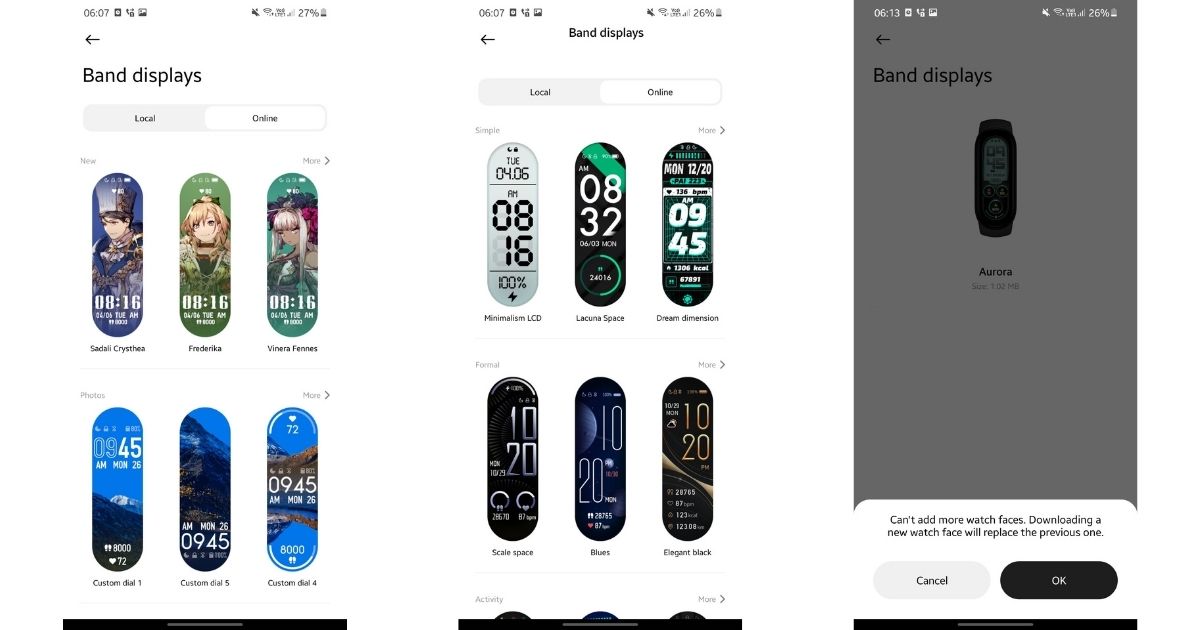 Coming to watch faces, there are quite a few options available to download. The Mi Smart Band 6’s elongated screen doesn’t translate well for analogue watch faces, so pretty much all of the ones available to download are of the digital variety. You’d also see quite a few watch face options showing characters from Chinese animated films, anime series, and cartoons. I can’t say I’m a fan of ‘Fox Spirit Matchmaker’ or ‘The Outcast’, but since these get their own set of options in the watch face section, I’m guessing they would be quite popular in China. Maybe Xiaomi should try and list options to suit Indian tastes as well, but that said, there are ample generic options available too, covering categories like fashion, simple, formal, science and technology, etc. 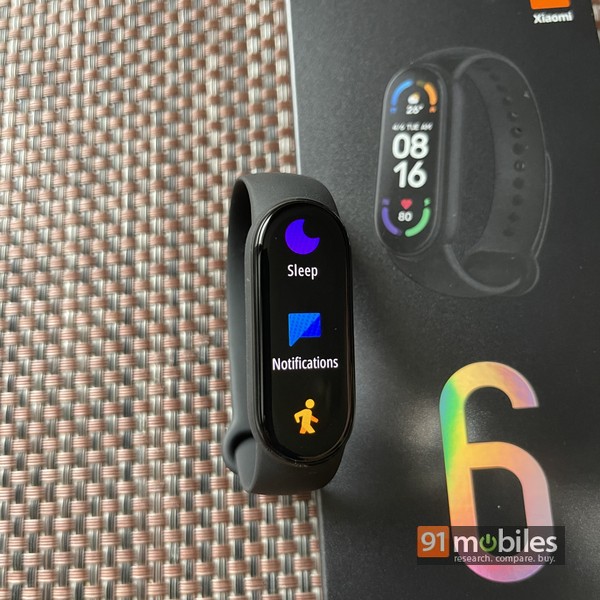 Using the Mi Smart Band 6 on a day-to-day basis is simple, and apart from enabling the settings you want, all you basically need to do is strap it to your wrist and let it do its job. Because of the new edge-to-edge screen, the capacitive button below the screen, as seen on the previous model, is now gone. So you can tap on the screen to wake it up, and then use swipes and taps to navigate. The device interface is simple and intuitive, and essentially comprises a vertically-scrolling list of icons, representing various features and functions. Swiping left or right displays widgets (weather and music by default, respectively), and these can be customised via the app. 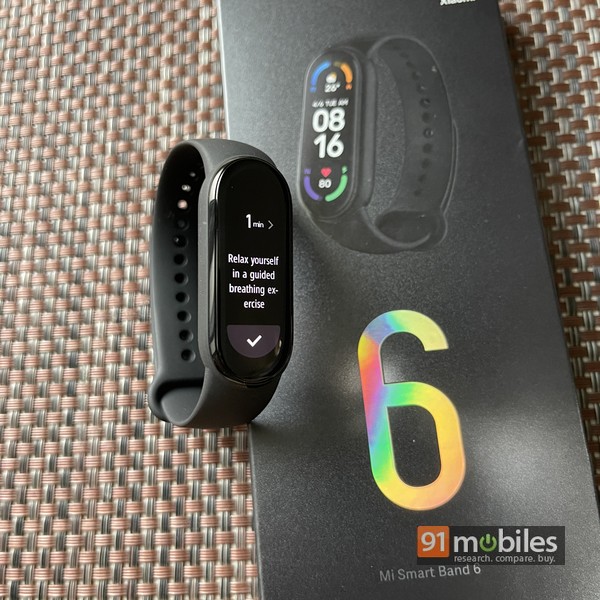 The Mi Smart Band 6 does a fair job of capturing physical activity, and the added new features should be quite useful for those who want to monitor their health in a better way. I found some aspects like SpO2 and night sleep durations to be slightly iffy, but I’m not going to hold it against the device – the reality is that most of these fitness bands and trackers do have variations in the data they capture. Otherwise, the data metrics and the insights provided by the activity data captured by the Mi Smart Band 6, especially over a long time period, should help you not only understand your body and levels of physical activity better but also take corrective steps to ensure things improve. 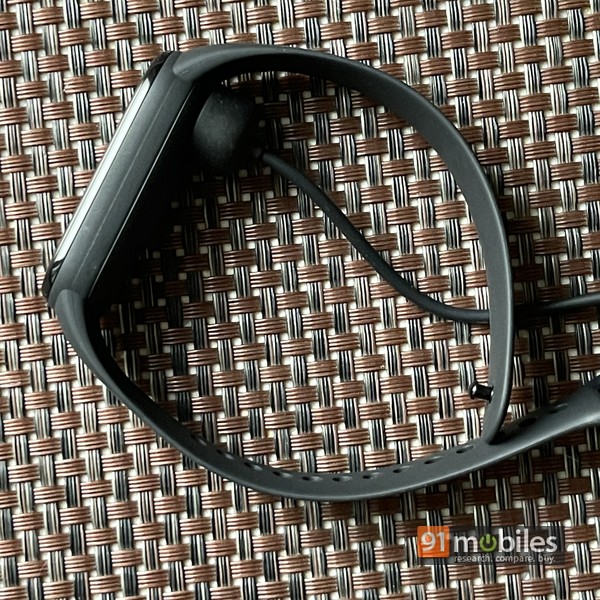 The Mi Smart Band 6 is powered by a 125mAh battery that can be charged via the cable that features a magnetic connector. Charging is super convenient, since you don’t need to yank out the device from the strap, and the charger just gets hooked up magnetically to the back of the tracker. Juicing up takes under 2 hours, and the battery is rated to last up to 14 days. Xiaomi’s Mi Bands are known for their long battery life, and the Mi Smart Band 6 is no different. Based on my experience with it, you can expect about 10-12 days easily, with basic usage. However, do keep in mind that the advanced features like continuous heart rate monitoring, sleep breathing monitoring, etc, impact battery life significantly. And if you use its exercise modes frequently and for longer durations, and keep the aforementioned features enabled, you could end up charging it once every 4-5 days.

It won’t be too far-fetched to say that just like the smartphone segment, competition and rivalry in the fitness band segment have become extremely intense in recent times. Xiaomi’s Mi Smart Band series has been extremely popular over the years, and not without good reason. The devices in the range have always offered solid value for money, thanks to their compelling features and affordable price tags. And I’m glad to report that the Mi Smart Band 6 isn’t too different… for the most part at least. Its asking price of Rs 3,499 means it goes up against not just fitness bands, but those that use the watch form factor to deliver similar features. The Mi Smart Band 6 still ticks the right boxes though, and thanks to new additions like the SpO2 sensor, doesn’t miss out on anything a user might want in a basic fitness tracker. Worth a buy, this one.