As a product category, tablets tend to get squished between smartphones and laptops. While both smartphones and laptops are must-haves, tablets… not so much. Furthermore, tablets aren’t as handy as smartphones or as productivity-focused as laptops. That said, many use cases such as browsing the web, reading online articles, online shopping, entertainment, and even gaming are common across the three categories. Still, there’s nothing better than a tablet when you want to curl up on your favourite couch or lie in the bed to catch up on news or binge-watch TV shows. In recent times, affordable slates have made a comeback of sorts, and the latest to hit the shelves is the Moto G70 Tab LTE, a device that makes a strong case for itself for those who don’t want to spend big bucks. Let’s get up close and figure out how well it fares. 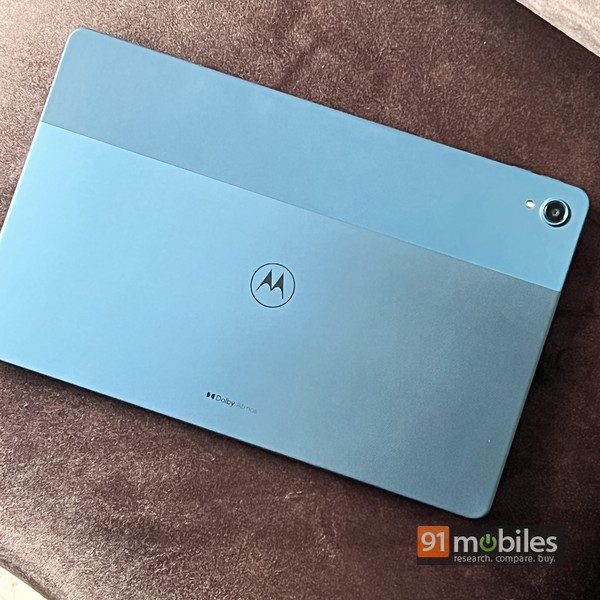 The Moto Tab G70 LTE looks and feels quite premium, thanks to its sleek 7.5mm aluminium body. The dual-tone colour finish on the back adds to the premium look, with the Cyber Teal shade bringing a touch of youthfulness. A third of the back has a matte, non-slip finish, which spills over to the adjoining edges too. Other than that, the back panel bears the Moto logo in the middle, Dolby Atmos branding below, and a camera module at the corner that juts out a bit. A flash Is placed next to the camera. 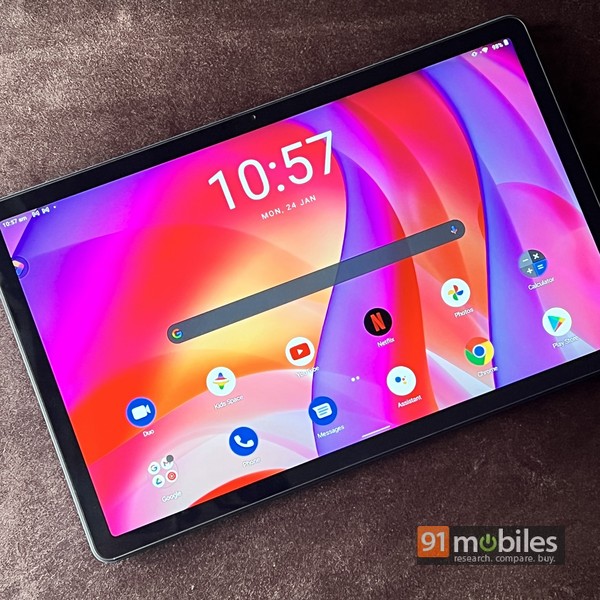 On the front, the 11-inch display dominates proceedings. The IPS LCD display offers 2K resolution, and has slim bezels all around. Holding the slate in landscape orientation, you’ll see the front camera placed above the display, while the USB Type-C port is on the right, the power key on the left and discrete volume buttons on the top edge. The top edge is also home to a pair of mics and a combo tray that accepts a SIM and a microSD card. 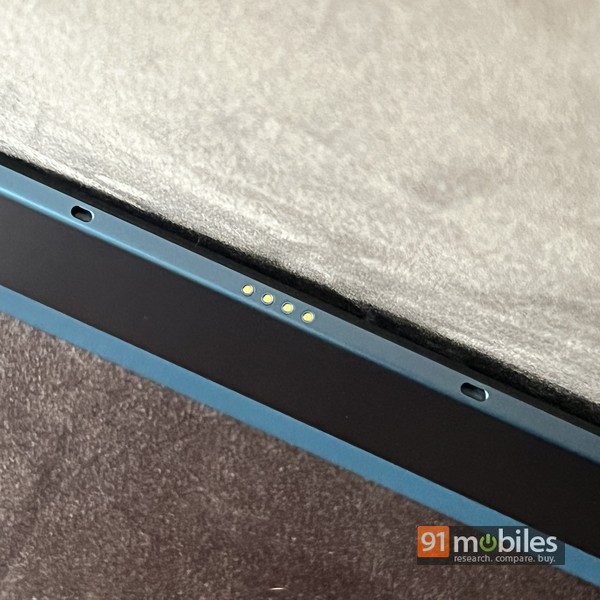 On the bottom edge are pogo pins and a couple of orifices that should accommodate a keyboard (possibly a keyboard folio cover with a kickstand) when Motorola chooses to launch one — no such accessory is currently available. The device features a quad-speaker setup, and holes for those are visible on the left and right edges. Worth mentioning that the Moto Tab G70 is IP52 rated and is water repellent, so minor spills and splashes shouldn’t be a cause for worry. The device tips the scales at 490g, which isn’t really featherweight, but is still light enough for handling. For extended usage, you might want to use a stand or prop up the device against something to avoid hand fatigue though. 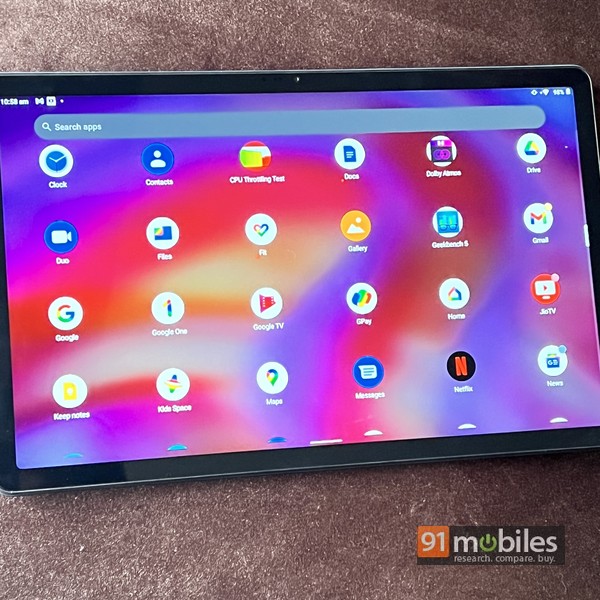 While the LCD screen can’t offer the same level of colour vibrancy or deep blacks as an AMOLED panel, it gets plenty bright at 400 nits. Sharp visuals and crisp text are in the offing, and the screen has been certified by TUV as well. It’s also certified for Netflix and Amazon HD content, and thanks to its large 11-inch size, works great for binge-watching. However, there’s no high refresh rate and the display refreshes at a standard 60Hz. The screen can be customised too, and you can tweak colour tones via display settings. You also get a dark mode and an eye protection mode as well. The quad Dolby Atmos speakers churn out loud and rich audio, making the slate ideal for entertainment. The preloaded Dolby app gives you access to a few preset audio profiles, and you can choose to tweak the audio as per your own whims and fancies. The lack of a 3.5mm headphone jack is a bummer though. 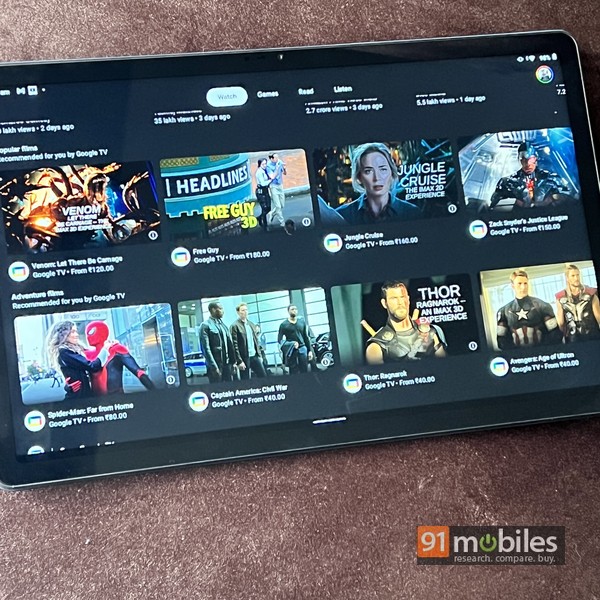 Software-wise, you get stock Android 11, sans any bloatware. Motorola guarantees an upgrade to Android 12, and two years’ worth of security updates. You also get Google Kids Space which lets you create a parent-supervised profile for kids, giving them access to age-appropriate content. Limits on usage and content restrictions can be managed via the Google Family Link app. Also preloaded is the Google Entertainment Space, accessible by swiping right on the Home Screen. This aggregates and offers suggestions for entertainment-related content, including movies, videos, books etc from various apps and streaming services, listing it all together at one place for easy access. The Netflix app comes preloaded as well. Taking advantage of the large screen real estate, you can run two apps side-by-side in split-screen view if you want. 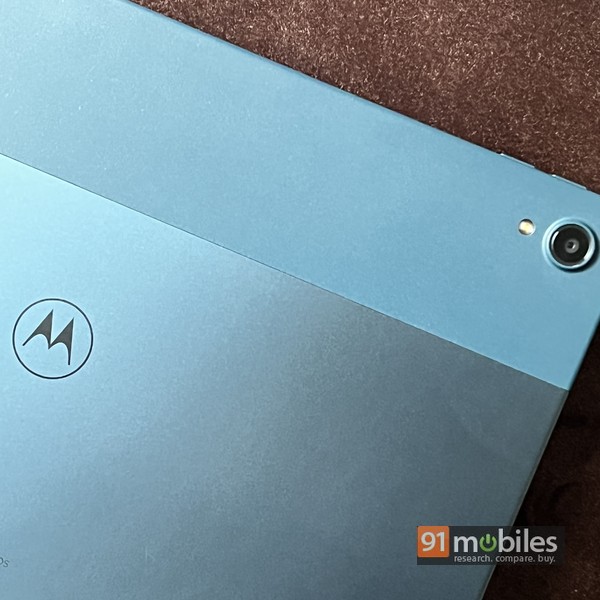 For number-crunching, the Moto Tab G70 makes use of the MediaTek Helio G90T processor. This 12nm octa-core processor was seen previously in phones like the Realme 6 and Redmi Note 8 Pro, both of which are over a year old. The SoC delivers enough grunt for smooth day-to-day performance, and can handle casual gaming as well. There’s 4GB of RAM on board and multitasking is handled smoothly as well, though I wish Motorola had launched a 6GB model of the Tab G70 as well. In fact, there’s only one model on offer at the moment, featuring 4GB RAM and 64GB storage. I think with its large screen and decent performance, the Tab G70 holds potential as a productivity-oriented device as well, which is where more RAM and storage, and a keyboard cover accessory, could have come in useful. 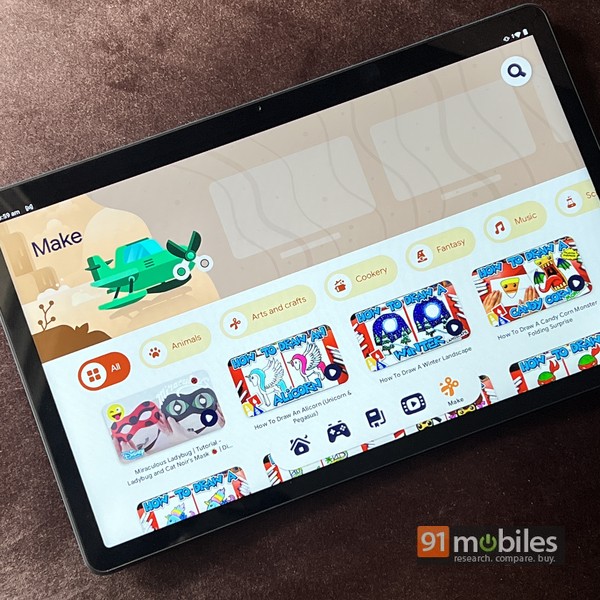 There’s no fingerprint scanner on the Tab G70, but you do get face unlock. The latter works reasonably well in good lighting, but could’ve been a tad bit faster I feel. That apart, you also get 4G support and the ability to make and receive calls too, with the data capabilities making the tablet suitable for use when out and about. I won’t get into details on the 13MP rear camera, but the 8MP sensor on the front works well for video calls, so no complaints there. 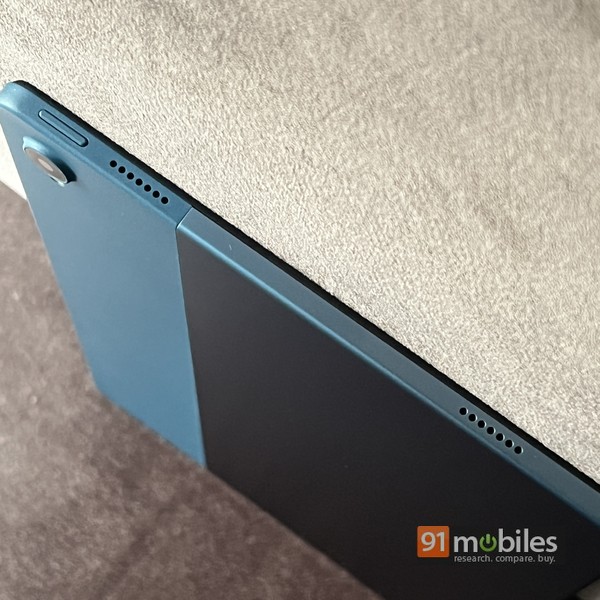 Coming to the battery life, the 7,700mAh unit inside the Tab G70 LTE lasts fairly long. With intermittent usage, it easily lasted me 2-3 days between charges, though more extensive use would see it drain faster. There’s support for 20W fast charging, and the bundled adapter juices up the slate fully in a little under three hours, which isn’t too bad considering the large battery capacity. You get 50 percent charge in about an hour, and 80 percent in about an hour and a half, so you should be sorted for a full day’s usage without being tethered to the power socket for long. 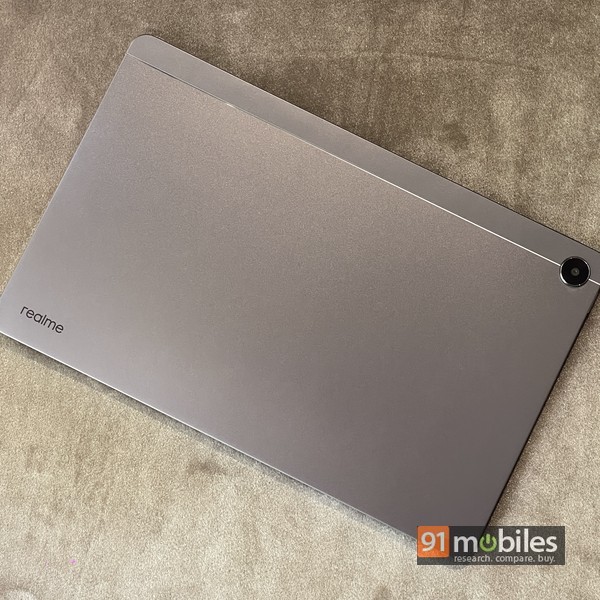 As far as competition is concerned, the Moto Tab G70 competes with the newly-launch Samsung Galaxy Tab A8, the older Tab A7, and other options from the likes of Lenovo in its price range. However, its closest rival has to be the Realme Pad (review) in terms of pricing, specs and software. Overall, Moto Tab G70 trumps the Realme Pad in most aspects, such as performance (Helio G90T in the Moto vs Helio G80 in the Realme Pad), screen size (11-inch vs 10.4-inch) and battery (7,700mAh vs 7,100mAh). That said, I think the base variant of the Realme Pad, which is Wi-Fi only and offers 3GB RAM and 32GB storage, is still great value for its asking price of Rs 13,999. The Realme Pad’s 4/64 version with LTE is priced at Rs 17,999, and if one is eying that, I think it’d make more sense to spend a bit more and get the Moto Tab G70 LTE instead. While the Realme Pad does offer a 3.5mm headset jack (a feature missing on the Moto Tab G70), the Tab G70’s larger display, better performance and bigger battery do help its cause.

I think the verdict is pretty clear. The Moto Tab G70 LTE, for its asking price of Rs 21,999, isn’t perfect by any means. The lack of a 3.5mm headset jack is a bummer, the screen could do with higher refresh rate, and the brand should have introduced more options as far as RAM and storage are concerned. And the slate is just begging for a first-party keyboard cover accessory. That said, the Moto Tab G70’s offers the largest screen in its segment, and a pretty capable one too. The speakers are good, and so are other core aspects like performance and battery. The good looks, premium design, and splash-proof build help as well. A compelling option in this price range, if you ask me.