There are gaming laptops and then there is the MSI Titan GT77. It is an extremely powerful and (undoubtedly) one of the most expensive laptops available in India. Capable of competing with high-end gaming desktops, the latest iteration comes with Intel’s top-of-the-line 12th-gen Core i9 HX processor, up to an Nvidia GeForce RTX 3080 Ti mobile GPU, and a super-fast 360Hz refresh rate display. To top it off, there is also a low-profile mechanical keyboard, plenty of storage for your game libraries and of course, tasteful RGB lighting. 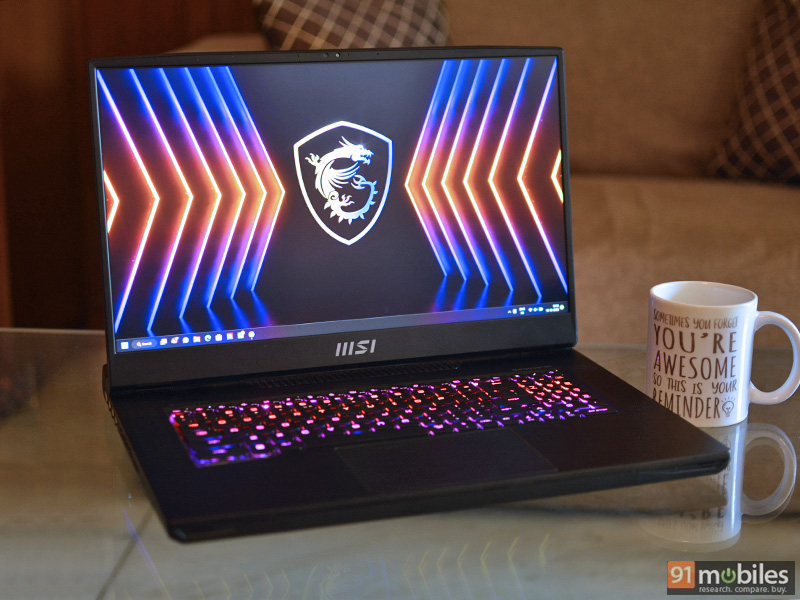 The laptop sounds quite something on paper, but is it actually worth the eye-watering price tag of Rs 4,99,990? Here’s an in-depth look.

MSI is known for its dark stealthy aesthetics, and while I personally find them dull, the Titan GT77 is anything but. It looks brilliant, almost like an expensive sports car and built like a tank. The lid has a metal finish while the keyboard deck is made out of premium plastic, so there is very little flex. The bottom cover is also made out of plastic with a metal mesh for air intake. 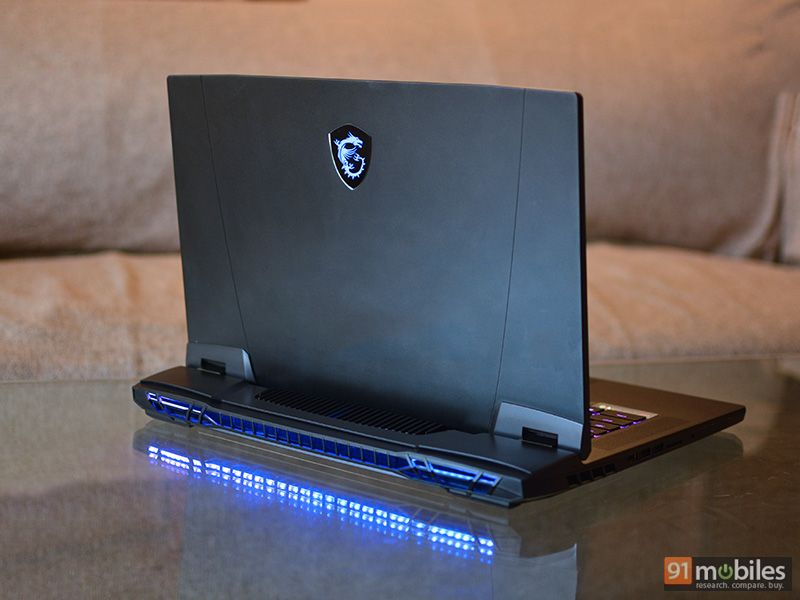 Considering the size and amount of hardware it packs, it is heavy but not as much when compared to older generation 17-inch laptops. It weighs 3.3kgs on its own and goes up to 4.9kgs with the charging brick and power cord. In terms of thickness it measures 23mm and goes up to 33mm at the rear. So, while it is possible to it carry around, the laptop is primarily going to serve as a desktop replacement.

There is a large extended section at the back that is dedicated for the cooling system. This also makes the laptop larger when compared to other 17-inch gaming laptops. The extended back section is basically a large air vent alongside additional vents on the sides. 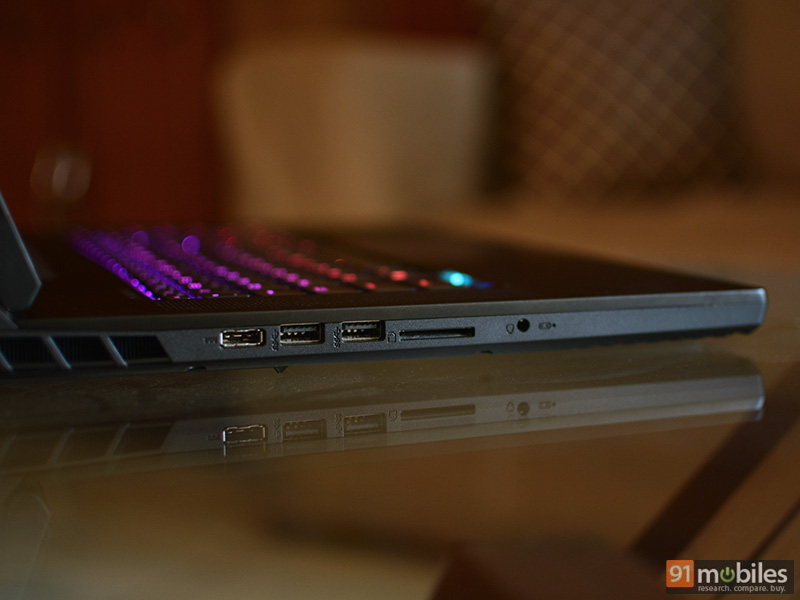 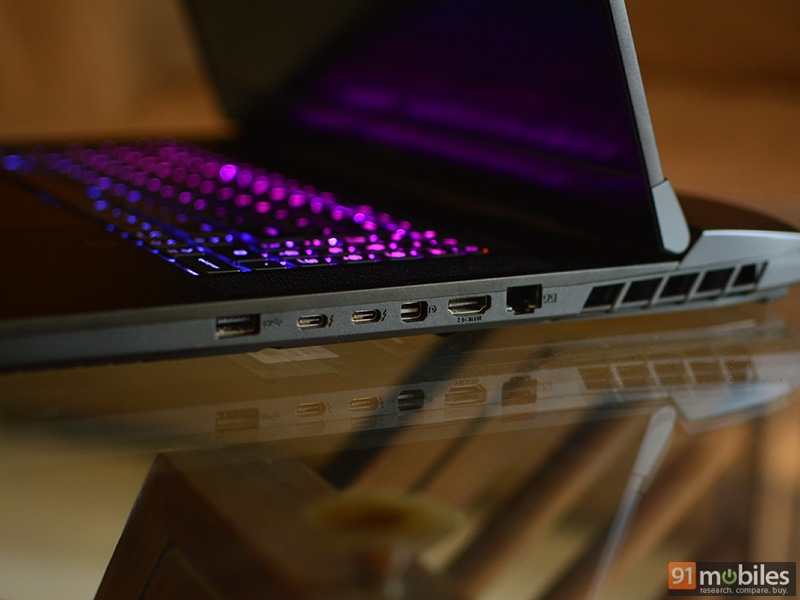 The I/O ports are on the left and right since the rear section is completely dedicated for cooling. The left side includes a reversible power connector port, two USB 3.2 Gen2 Type-A ports, an SD card reader (UHS-3) and a 3.5mm mic and headphone combo jack. The right side includes another USB 3.2 Gen2 Type-A port, two USB Type-C Thunderbolt 4 ports, a mini DisplayPort, HDMI and a 2.5-gig Ethernet LAN port. 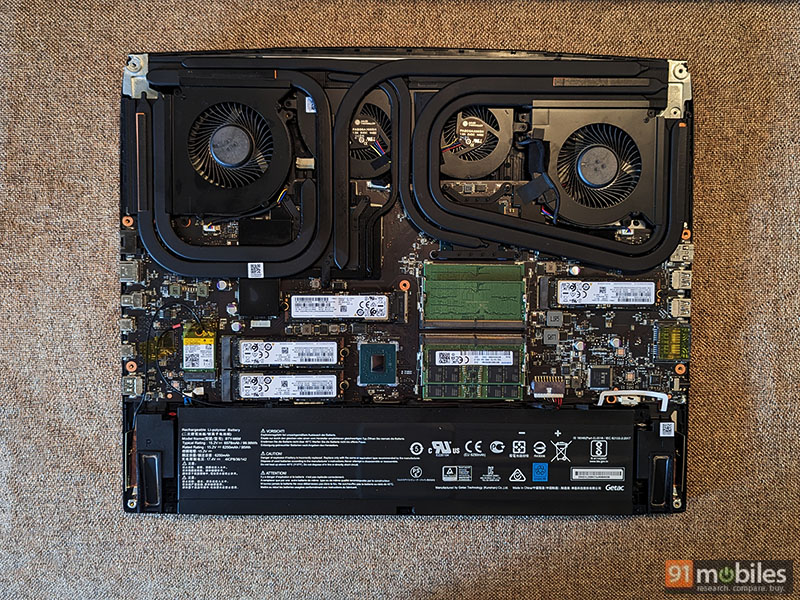 The bottom lid can be taken off by removing 11 screws and carefully prying the edges. On the inside you can see the 99.9WHr battery, four M.2 storage slots (3x PCIe Gen 4 and 1x PCIe Gen 5), the Intel Killer Wi-Fi card, and a total of four memory slots protected with a removable casing. Essentially, you can max out this laptop with up to 128GB (32GBx4) of DDR5 memory, and up to 32TB (8TBx4) of PCIe NVMe storage, which is quite insane. Apart from that, you can also see the thermal solution that includes a total of four fans instead of the traditional two, and multiple heat pipes that cool the CPU and GPU.

The 17.3-inch IPS panel comes with a full HD resolution (1,920 x 1,080 pixels) and a refresh rate of 360Hz. This makes the display an excellent choice for professional esports gaming. It also offers one of the fastest response times, which is something that is expected from a laptop at this price point. Even when you are not gaming, you can actually feel a certain amount of fluidity especially while scrolling through web pages or just watching video content. 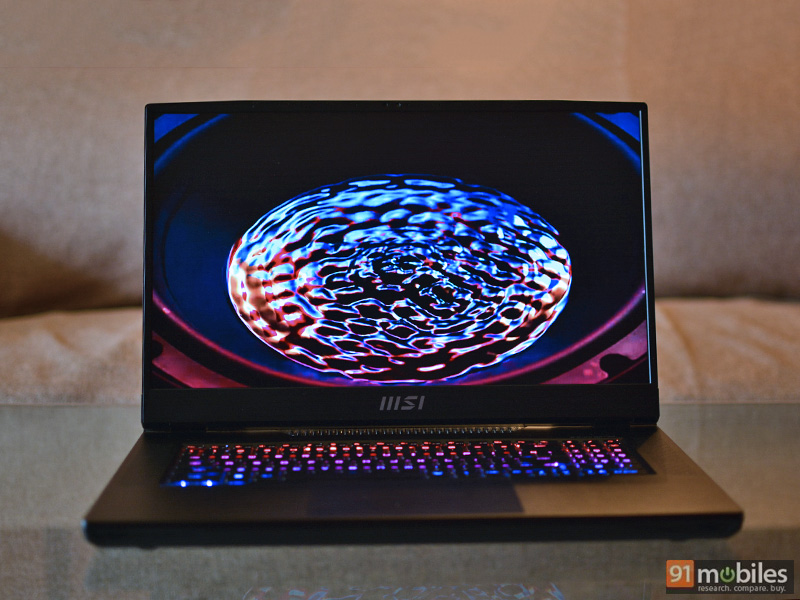 In terms of colour reproduction and contrast, the panel lives up to expectations. It is rated at 99.5 percent sRGB with brightness levels going up to 350 nits. You can find other gaming laptops that offer brighter and punchier-looking displays, but I honestly didn’t have much to complain about. MSI also offers a 4K resolution display option with up to 120Hz refresh rate, which honestly seems worthy of the hardware. But not only is it going to be more expensive, but the stocks also seem pretty erratic.

To fine-tune the display, MSI offers a dedicated software called True Color, which can be downloaded via the MSI Center. It features a bunch of display calibration options as well as preset modes that you can quickly switch to get the right colour temperature, brightness and saturation.

The keyboard on the Titan GT77 has been co-developed by SteelSeries which automatically raises the bar for performance and comfort. It features Cherry MX Ultra Low Profile switches which makes it a breeze to use. The two-piece keycap structure and gold cross-point contact system mean that you get tactile feedback and excellent actuation during typing and gaming sessions. The keyboard also comes with per-key RGB lighting that is fully programmable so you can play around with various colours and patterns and even set macros. The dedicated num-pad is a nice addition although it uses smaller keys. 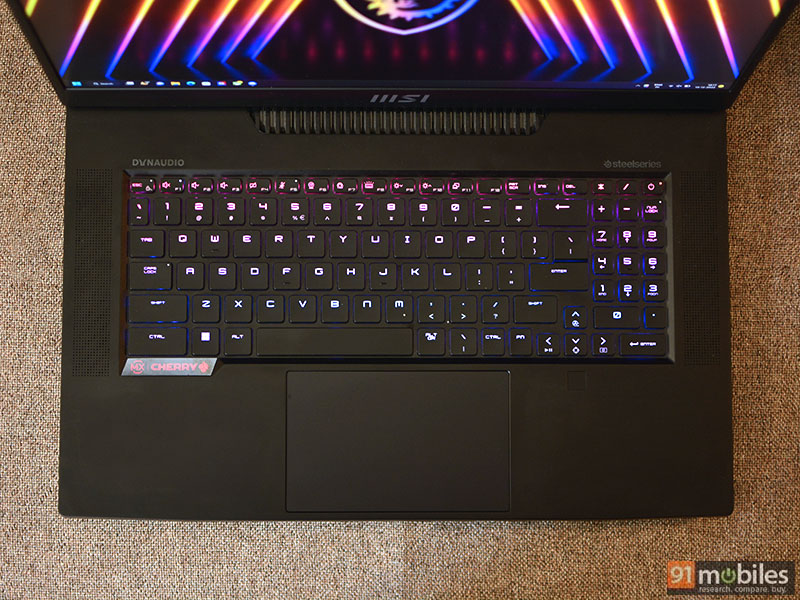 Overall the keyboard feels really good and one should easily get used to the layout and actuation force. One thing that I noticed is that only the primary keys feature the low-profile switches while the rest feature membrane switches.

The touchpad is fairly big and offers a smooth finish. I had no issues using it and liked the fact that you can click almost anywhere. There is also a fingerprint scanner next to the touchpad that can be configured with Windows Hello login.

Powering the Titan GT77 12UHS is the 12th-gen Intel Core i9-12900HX processor which is currently the most powerful mobile chipset from the company. It features eight performance cores and eight efficiency cores with a total of 24 threads and a maximum boost clock speed of 5GHz. The processor also comes with Intel UHD graphics that feature 32 execution units and a maximum clock speed of 1.55GHz. As for the GPU, the laptop features the Nvidia GeForce RTX 3080 Ti with 16GB GDDR6 memory and clock speeds going up to 1640MHz. There is also 64GB of DDR5 memory clocked at 4800MHz and, as mentioned before, there are four memory slots in total so you can always upgrade up to 128GB in the future. I was also pleased to see all four M.2 slots occupied by PCIe Gen 4 SSDs giving me 4TB of storage, which is pretty insane to see on a laptop. In CrystalDiskMark, all of the SSDs managed to reach peak sequential read and write speeds of 7,000MBps and 5,000MBps respectively.

The laptop felt extremely fast and responsive and while that is due to the super fast internals, the 360Hz refresh rate just makes things smooth as butter. Games and apps load instantaneously and cannot recall a single stutter or delays during my testing.

Running the standard set of benchmarks, the laptop is clearly a performance king. Every single CPU and GPU stress test was handled like a champ. In Cinebench R23 it scored over 20,000 points in the multi-core test and over 31,000 points on 3DMark Fire Strike. There are a bunch of settings that you need to tweak in the MSI Center app to attain the highest performance. For instance, the Extreme Performance profile offers additional settings to increase the GPU core clock and VRAM clock offset by up to 200MHz as well as choose between different fan speeds like auto, cooler boost and manual.

The laptop is a gaming beast and I was thoroughly impressed with how easily it could handle the most demanding gaming titles. Cyberpunk 2077 at ultra performance settings produced around 110FPS, and I was still getting over 70FPS once I turned on ray tracing. Spider-Man Remastered also showed similar results, though it was much better than Cyberpunk 2077 in high and medium performance settings. Since there is a super fast refresh rate display on the laptop, I spent a lot of time playing Apex Legend. Lowering the graphics settings to medium, I was getting over 200FPS, which was an absolute delight.

MSI claims that the CPU and GPU can deliver combined performance of up to 250W, which in itself is a huge achievement. During gaming, the RTX 3080 Ti has the potential of going up to 175W. On the other hand, for CPU-intensive tasks, the Core i9-12900HX is capable of 150W. The claims mostly hold true as the CPU on Cinebench R23 benchmark peaked at 193W and eventually dropped to 125W. The GPU peaked at 162W and eventually dropped to 125W with performance spikes going up to 174W.

Coming to thermals, MSI has done an impressive job. With seven heat pipes and four cooling fans, the cooling system on the Titan GT77 12UHS is simply superb. In fact, when left idle, the laptop does not necessarily need the fans to be enabled and can easily cool the CPU passively. Under heavy loads, the fans obviously get very loud, but that is a trade-off if you want to tame the power-hungry CPU and GPU. As for the temperatures, the CPU logged a peak of 96°C and would stay around mid-80°C during CPU-intensive workloads. During gaming, the GPU remained in the 70°C-80°C range, which is excellent for the high-powered RTX 3080 Ti mobile chipset. At no point did I find the keyboard deck hot enough to be unusable.

The notebook came with Windows 11 preloaded which thankfully did not include a lot of bloatware. I was definitely annoyed by the constant Norton Security notifications, but other than I didn’t find anything else that was intrusive. The MSI Center app is a must to control and tweak various aspects of the laptop, and it has an inbuilt section to install other MSI apps which you may or may not require. Like a number of gaming laptops that I reviewed recently, the Titan GT77 12UHS also comes with Nahimic audio customisation, but honestly the speakers sound pretty good on their own. Maybe not as good as a MacBook Pro, but definitely one of the best offering clarity and a decent amount of bass.

The laptop also features Windows Hello biometric security via the fingerprint scanner and the IR-enabled webcam. Both work fast and accurately, allowing you to quickly log in to Windows. I just wish that MSI had implemented a better camera as 720p resolution just doesn’t cut it, especially on a machine that costs so much.

The battery unit on the Titan GT77 12UHS is rated at 99.9WHr, which is the largest size that you can get on any laptop. The 330W charging brick is pretty hefty and carrying it around with the laptop can be cumbersome. Considering the high-end CPU and GPU combination, I didn’t have a lot of expectations with the battery life. 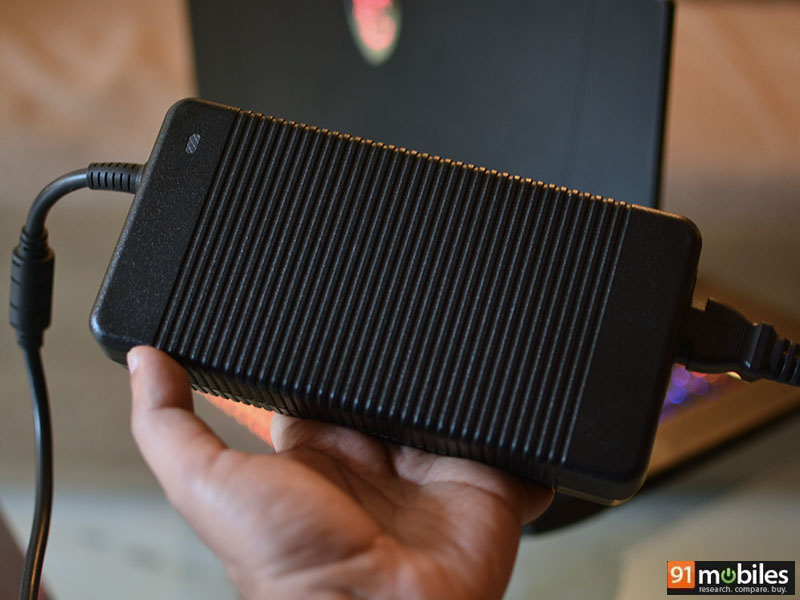 However, I was surprised to get close to five hours of runtime that involved light workloads. The best thing about the laptop is the Display Power Saver setting which is enabled by default in the MSI Center app. This feature automatically drops the refresh rate down from 360Hz to 60Hz when you unplug the charger, thus giving you more battery life. MSI Center also offers the Super Battery performance profile, which again prioritises battery life over performance. Overall, it isn’t as good as some AMD-powered gaming notebooks, but for something that is packing such high-end hardware, the battery life is good.

For Rs 4,99,990, I really cannot recommend buying the MSI Titan GT77 12UHS. There are various configuration options offered by the company, and depending on availability, you can save some money by opting for lesser RAM and/or storage and eventually upgrade down the line. But even so, the asking price is more than enough to build a rock-solid gaming desktop, with all the necessary peripherals. In fact, you will still end up saving enough money for a powerful mainstream gaming laptop.

Having said that, the Titan GT77 12UHS is truly the fastest and the most powerful gaming laptop that I tested in 2022. No other laptop can match the performance of this beast by a mile. If money is not of any concern to you, then this is the best desktop replacement.