I swear by OPPO’s audio products and the company has, time and again, proven its mettle by launching quality Bluetooth earphones that sound phenomenal. The Enco M31, for instance, has been my de facto recommendation for buyers looking for a neckband-style Bluetooth headset under Rs 2K. At the other end of the spectrum, the company’s Enco X TWS earphones (review) continue to be the best-sounding, wire-free earbuds money can buy. That being the case, I was particularly excited to test the OPPO Enco buds earphones, which are the latest, wallet-friendly TWS earphones from the brand. I’ve been using the same for about a week and in this review, let’s see if they are worth your bucks.

The OPPO Enco Buds are a spitting image of the company’s Enco W11 TWS earbuds launched a while ago. Be it the design of the case, or the earpieces themselves, the Enco Buds does little to differentiate itself from its predecessor. If anything, I would’ve at least liked to see the company launch the Enco Buds in new colours. But, I digress. On the bright side, the Enco Buds carry forward its predecessor’s classy design and look the part of a pricey TWS headset. The earphones, as well as the carrying case, have been constructed using plastic and the build quality on offer is downright fantastic – the earpieces don’t feel flimsy and the case offers a robust hinge and snaps shut with a satisfying click. I was a little miffed when I realised I couldn’t open the case with one hand, despite a rather large indent towards the front of the unit. But, on the bright side, the case ships with a Type-C port and even offers magnetic slots to anchor the earpieces securely. What’s more, the Enco Buds offer IP54 certification too, so the earphones should hold their own when you’re sweating it out in a gym. Speaking of which, the earpieces are featherlight and weigh in at just four grams each. So, you shouldn’t notice any wear fatigue set in, even after using the buds for hours on end. It would’ve been nice to be able to wear the earbuds to bed as well, but, the earpieces protrude outwards and therefore, feel uncomfortable to wear when your head is resting against a pillow. 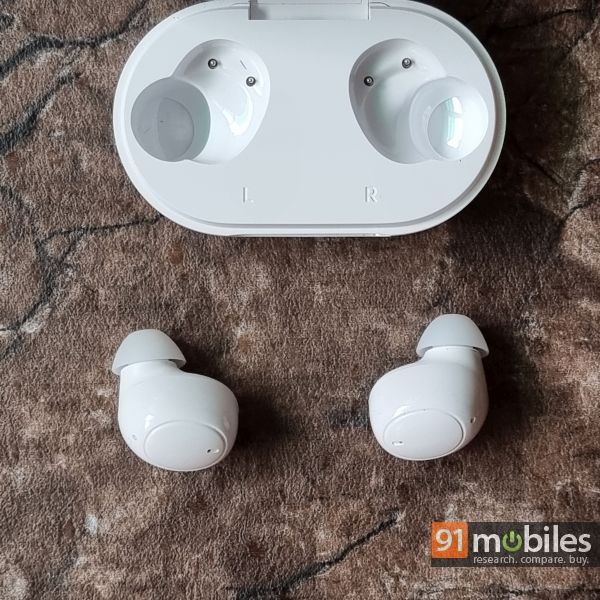 I was quite satisfied with the touch controls on the Enco Buds. Unlike most TWS headsets, the Enco Buds offer a spacious layout and you can tap on either the left or the right earpiece to invoke various controls. What’s more, the earphones beep whenever you use the music controls, thereby removing any guesswork as to how many taps have been successfully registered by the set. And, much like most other OPPO TWS headsets, you can even configure the touch controls on the Enco Buds by using the HeyMelody companion app.

As prefaced previously, you can tweak certain features of the Enco Buds by using the HeyMelody companion app. The app offers a fairly straightforward interface and shows you the battery percentage for the case as well as the earbuds front and centre. Below that, you’ll get the option to update the Enco Buds firmware and customise the touch controls. Unfortunately, unlike the Realme Link app, the HeyMelody app doesn’t offer any sound presets or a built-in EQ to tweak the Enco Buds’ sound profile. Moreover, the app is currently unavailable for iOS, which is a bummer. 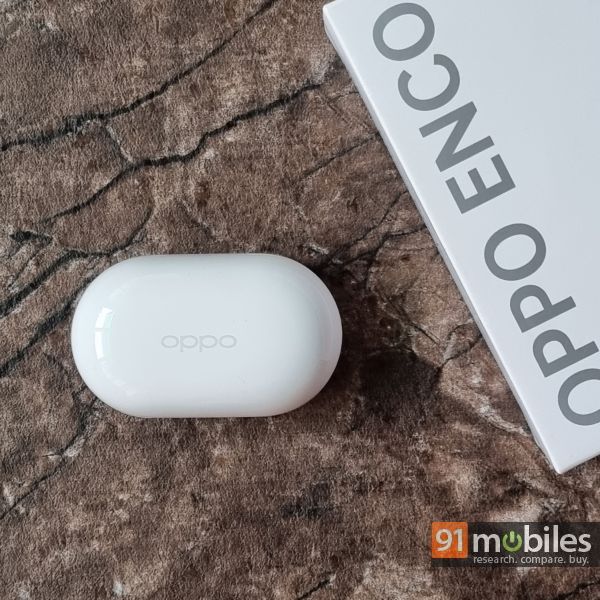 On the flip side, you do get a low-latency mode that should resolve any audio-video sync issues when you’re consuming media via the Enco Buds. As such, I didn’t run into any connectivity-related issues whilst using the pair either – the call quality was to my liking and the earbuds maintained a solid Bluetooth connection to my paired devices as well.

Much like the OPPO Enco W11, the Enco Buds also make use of a pair of 8mm dynamic drivers that have been positioned inside each earpiece. The earphones can operate across a frequency range of 20Hz to 20KHz and support both, SBC as well as AAC Bluetooth codecs. Now, most budget TWS earphones ship with a bass-forward sound signature, and the Enco Buds is no different. However, unlike competing TWS headsets like the Realme Buds Q2 (review), the OPPO Enco Buds’ low-end output isn’t overbearing – at least, not to the same degree. Instead, the Enco Buds low-end output, while weighty, doesn’t take too much away from the rest of the frequency spectrum. 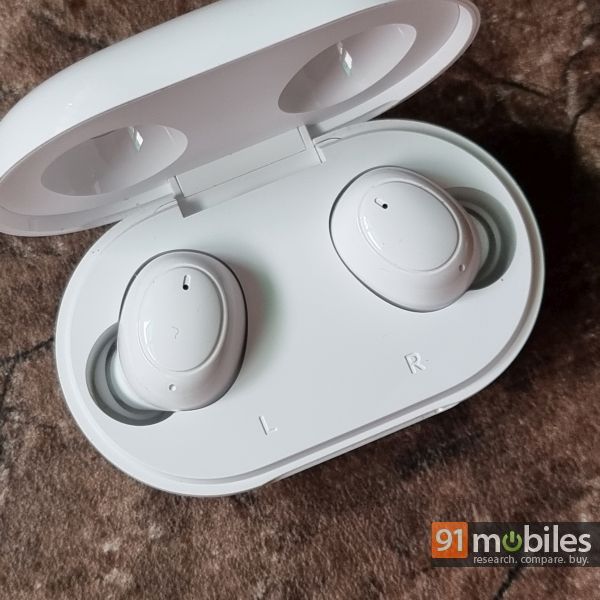 As an example, in Stormzy’s Vossi Bop, the first verse kicks off with a thumping beat which is reciprocated well by the Enco Buds – the impact has good depth and the beats sound relatively tight too. Similarly, in Rhye’s Verse or Sampha’s Plastic 100-degrees, the bass tabs are clearly audible. To be clear, the sub-bass in both the songs sounds quite bloaty, however, that’s to be expected given the unit’s pricing. What’s more, you will notice auditory masking whenever the vocals are playing alongside a beat. However, the low-end doesn’t recess the mids to the same degree as some other budget TWS earphones. 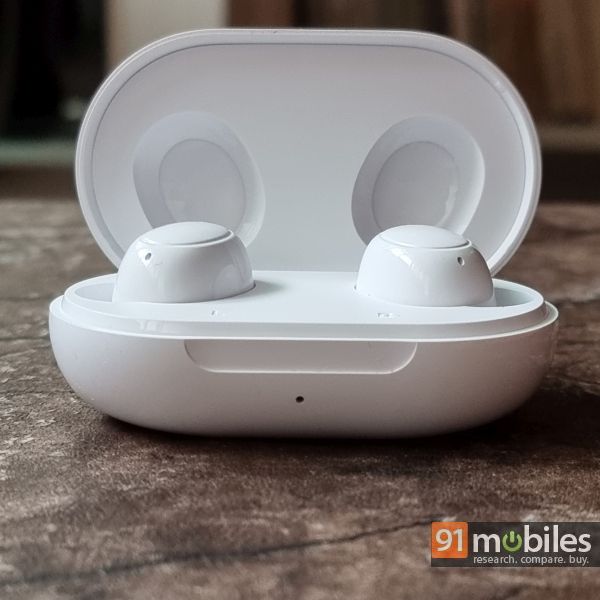 What’s more, the vocals don’t sound sibilant either, so if you like listening to podcasts or just vocal-heavy tracks, then you’ll find the Enco Buds right up your alley. Unfortunately, that’s more than I can say for the highs and songs from the rock/metal genre sound – for the lack of a better word – dull. Making matters worse, the unit’s imaging isn’t anything to write home about either, so songs with a lot of instruments might sound muddy, especially at high volume levels. 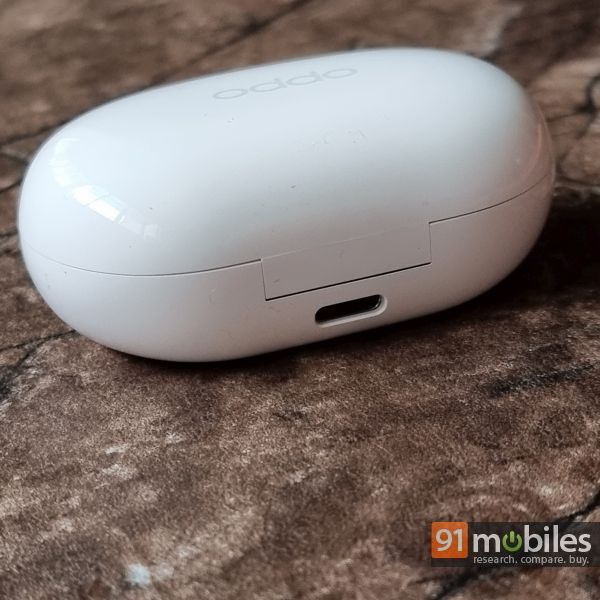 As for the battery life, the OPPO Enco Buds will easily last you a couple of days between charges. As prefaced previously, the earphones can be charged seamlessly with any Type-C cable you might have lying around, and the unit also supports quick charge functionality, allowing buyers to get a full hour’s worth of music playback off a 15-minute top-up.

The OPPO Enco Buds retail for Rs 1,999 and for the price bring a lot of enticing features to the table, including a classy (albeit dated) design, solid battery backup, and robust connectivity features. What’s more, for the price, the pair doesn’t sound all that bad either. While it’s not a game-changer like the Enco M31, the Enco Buds’ sound signature is more enjoyable and less inculpable than other similarly-priced TWS earphones. Rest assured, if you were in the market for a sub-Rs 2K TWS headset, the Enco Buds should be at the top of your wishlist.