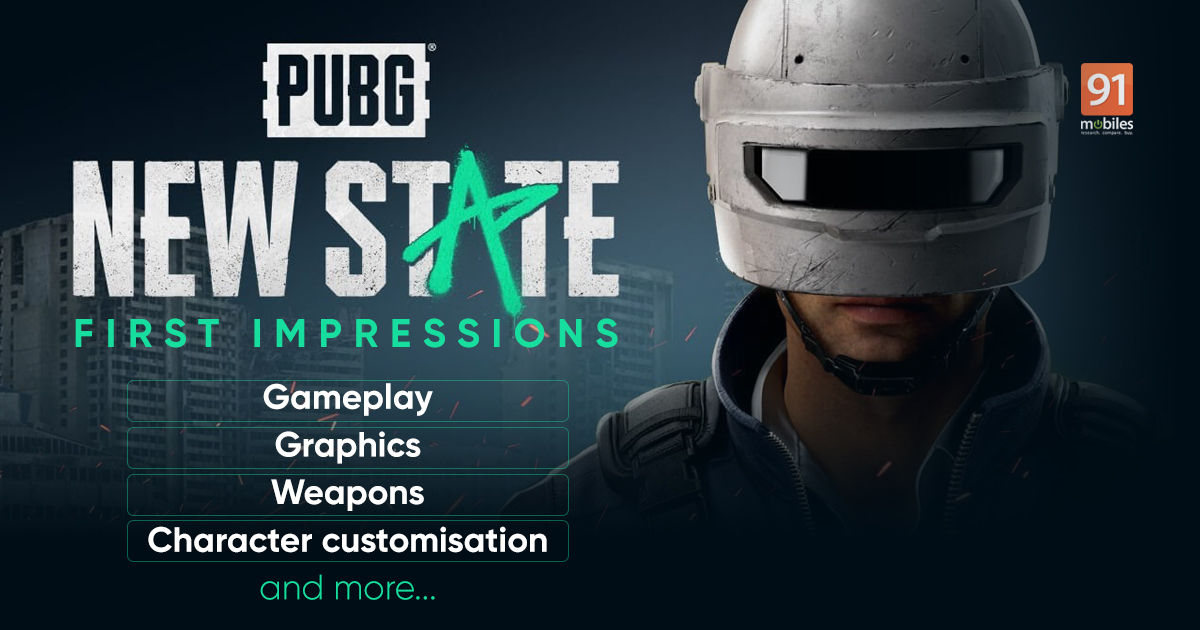 South Korean developer Krafton, which has developed PUBG Mobile and its Indian version BGMI, has come out with a new multiplayer battle royale game called PUBG New State. Set in the year 2051, New State inculcates almost all the elements of its successful sibling and looks to add a futuristic touch to the maps and gameplay. However, it functions as a separate title and as such has fewer maps and game modes than what you are typically privy to in BGMI and PUBG Mobile. The game is now available on both Android and iOS via Google Play Store and App Store, respectively. I downloaded PUBG New State on my POCO F3 GT (review), which runs on the Dimensity 1200 silicone conducive to heavy GPU usage. Here are my first impressions of PUBG New State.

Here’s what we think about PUBG New State, while trying out the game for the first time.

The game is about 1.7GB in size on Android and there is a further 270MB download that needs to happen after you have logged in. First-day users of New State will have to navigate through a series of server issues. For me, it was being stuck on a screen after the game asks to connect my social media account to my in-game user ID. After the temporary log-in issue is resolved, the interface of New State is more or less identical to some of the older versions of PUBG Mobile. There are no swipes from the main screen to check out your ranking, K/D ratio, tier level nor can a swipe show the day’s lucky spin and crate options. Instead, all information is crammed into each corner of the home screen. The settings menu also feels familiar with the graphics options slightly modified. New State has kept the same tier system as well with the user starting from Bronze V all the way up to Ace.

There is a global ranking system but there isn’t any India-centric server on offer like BGMI. Instead, you have options of South Asia, America, Europe, Asia, and MENA (middle eastern) servers. The best latency will be available in South Asia with the device showing usually keeping a 35-40ms ping during the game, depending on your network. Your character inventory and closet selection will have to be built from scratch and you can purchase the season 1 Survior Pass to get limited in-game merchandise access. You do have the option to choose a single outfit and vehicle skin at the very beginning but the selection is very limited.

From my initial impressions of PUBG New State, the basic gameplay is mostly what I’m used to on BGMI. The on-screen controls are the same, as are the basic game settings for auto pick up, scope, sensitivity, gameplay, graphics, language, and more. I could play the game at Max frame rate option and Ultra graphics quality. There is an Extreme option as well for both these settings but it could not be selected on my device. In any case, I was mostly getting around 55-60fps for about 15-20 minutes while keeping at Ultra graphics after which there was a noticeable drop in frame rate and the game automatically downscales the graphic quality.

While inside any of the game’s maps, the general graphics look very much a work in progress. Unfinished textures of the map’s terrain, overtly bright reflections, and a general lack of detailing across the game elements were quite common during my time playing the game. The popular Erangel map is available and it is called Erangel 2051 although there is barely any futuristic look to any of the buildings or transports. The Troi map is exclusive to PUBG New State but even during a 10-minute session on the map, I came across various bugs in the map which I believe should be resolved sooner rather than later.

Weapons happen to be identical to previous PUBG Mobile and BGMI games as are all the attachments to each weapon. Vehicles are also the same although some new additions are likely to come up in future updates. The recoil, firing speed, reloading, and damage indicators remain unchanged for PUBG New State. There are a few customisable features like the 3D HUD which shows ammo left in the mag and in your bag but I turned it off as the placement on the screen was too distracting. Player movement, driving, and swimming also feel quite similar to PUBG Mobile. At the end of each match you get a cool timeline that details where most of your gun battles were, what gun did you use the most, and where you and your teammates died.

Overall I feel that PUBG New State could do with a few improvements in the graphics quality department, more importantly, get the textures and object detailing right. Other than a few minor changes while firing certain weapons like the DP-28 and UMP 45, the gunplay and combat are very much similar to PUBG Mobile. The game can also do with the introduction of some futuristic elements to better depict a 2051 future in the game. There will obviously be several updates to the title which should introduce a few more game modes such as Arcade, War, Sniper only, and more. For now, I will stick to BGMI which does excel in terms of graphics, sustained frame rates, and better gunplay.