In an attempt to offer more, Chinese smartphone manufacturers have started slotting their products into various sub brands. As an example, you could either opt for the pricey Huawei P20 Pro (review) or the affordable yet feature-rich Honor 10 (review). In a similar fashion, manufacturers like Xiaomi, iVoomi, and OPPO have also introduced their sub brands in the country, ensuring buyers are spoilt for choices. 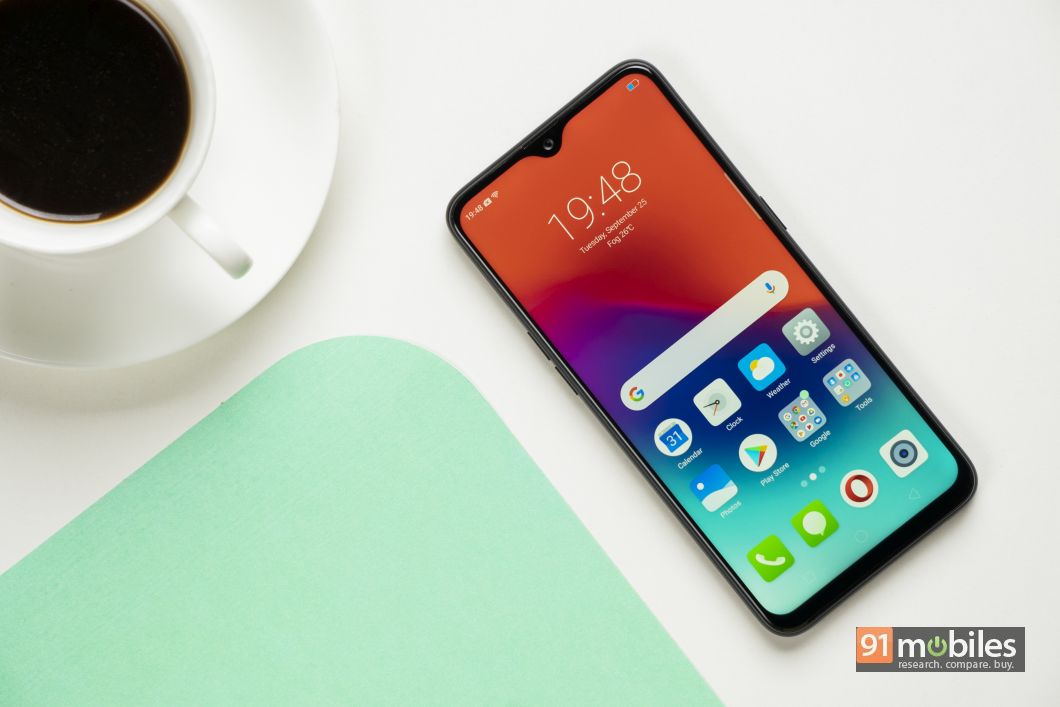 Now, we already know that Xiaomi’s Poco F1 (review) was a runaway hit, but OPPO’s Realme 2 (review) raised a lot of eyebrows when it was first launched as it was a step down in terms of performance as compared to its predecessor, the Realme 1 (review). To set things right, the brand has just announced the Realme 2 Pro, which ships with significantly more powerful innards. So in this review, let’s take a look at what the smartphone brings to the table and if it is worthy of your hard-earned bucks.

The Realme 2 Pro takes most of its design cues from its predecessor, the Realme 2. With the newer model, you’ll get the same glass-sandwich design which is held together by a rubberised frame with chamfered edges. Although the lack of a metallic trim makes the smartphone feel a lot less premium in the hand, the rubberised texture of the frame does wonders for your grip. My review unit of the Realme 2 Pro shipped in an all-black colourway and much to my dismay, the device omits the diamond-cut pattern on the back which made its predecessors the talk of the town. 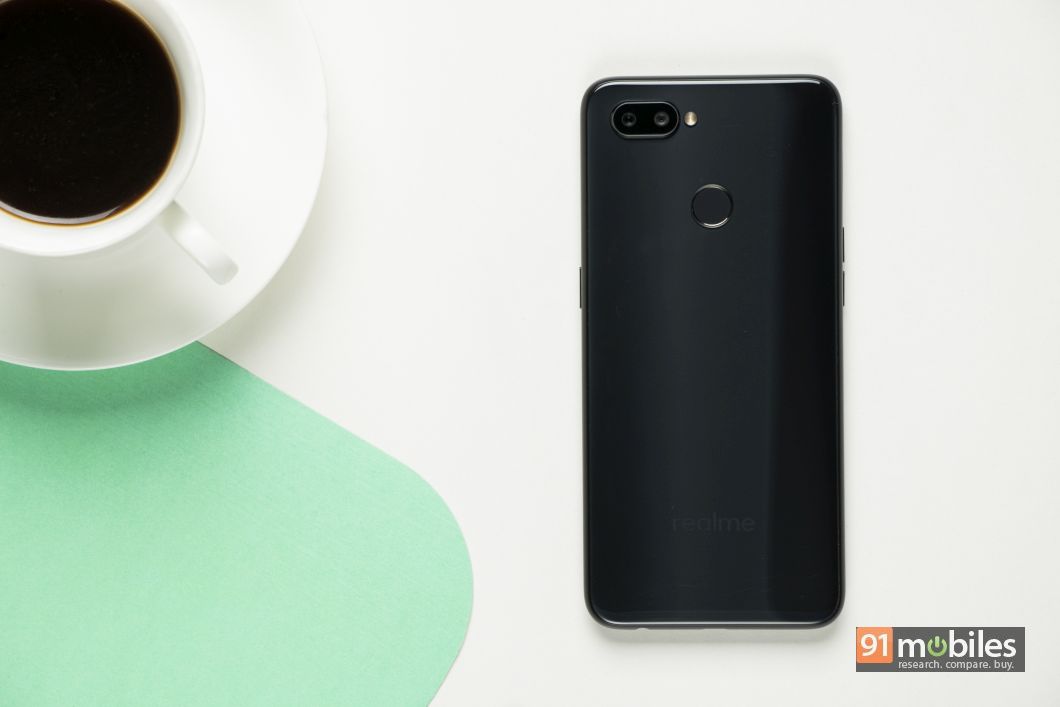 That said, the smartphone still looks quite good, so long as you can keep the back from smudging. Thankfully, the company does bundle a transparent case with the retail unit of the device which will allow you to flaunt the looks of the device whilst protecting it from accidental drops at the same time. 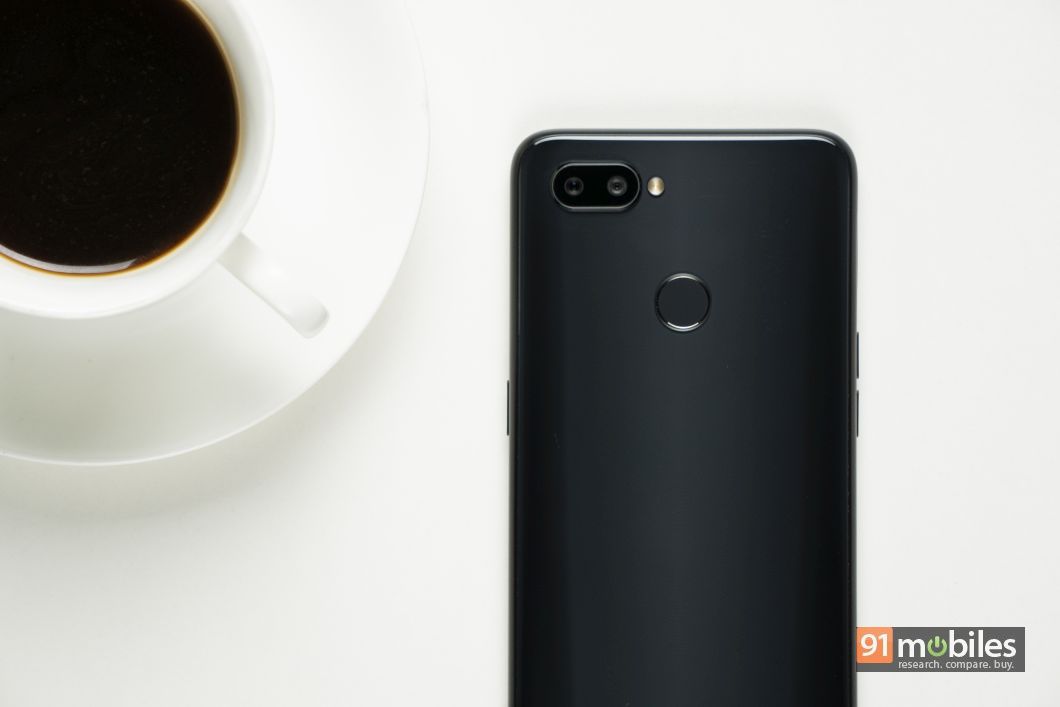 While we are on the subject of the smartphone’s back, I should point out that the device also ships with a fingerprint sensor which worked flawlessly during my time with the phone. You can also use the built-in face unlock feature to unlock the device, which works equally well. Coming back to the fingerprint sensor, the unit has been positioned rather ergonomically, and it aligned perfectly with my index finger when I was operating the device with just one hand. On that note, the Realme 2 Pro is a joy to use single-handedly, thanks to its excellent weight distribution and a grippy design. Therefore, it’s going to take a lot more than a bump in a busy metro to knock the smartphone from your hands. 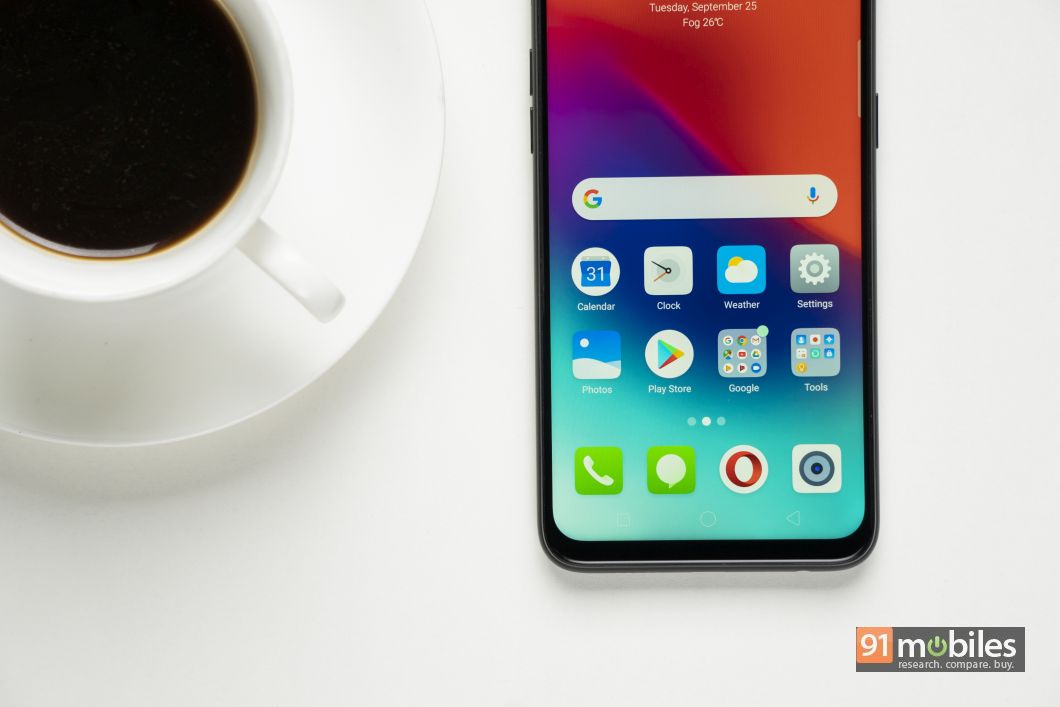 That’s not to say that the design of the smartphone is without its flaws. Within just a week of using the device, I noticed that the power button had lost its tactility. Moreover, the display doesn’t merge seamlessly into the frame of the device which drove me nuts during my time with the smartphone. I was also disappointed with the company’s decision to opt for a micro-USB port when the entire industry is switching to a USB Type-C port on their devices. 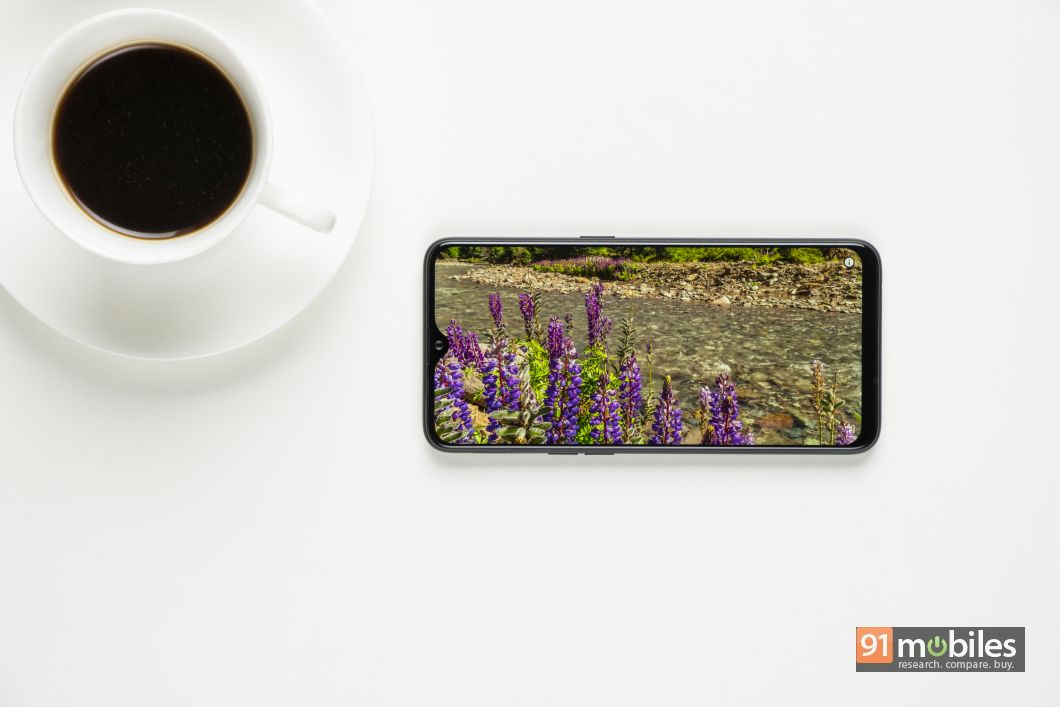 Thankfully, the Realme 2 Pro ships with a gorgeous display which more than make up for the minor quibbles I had with the design of the device. The smartphone sports a 6.3-inch AMOLED panel which boasts excellent viewing angles and adequate peak brightness levels. What’s more, unlike some other affordable smartphones, I didn’t notice any weird colour shifts on the display of the Realme 2 Pro either. 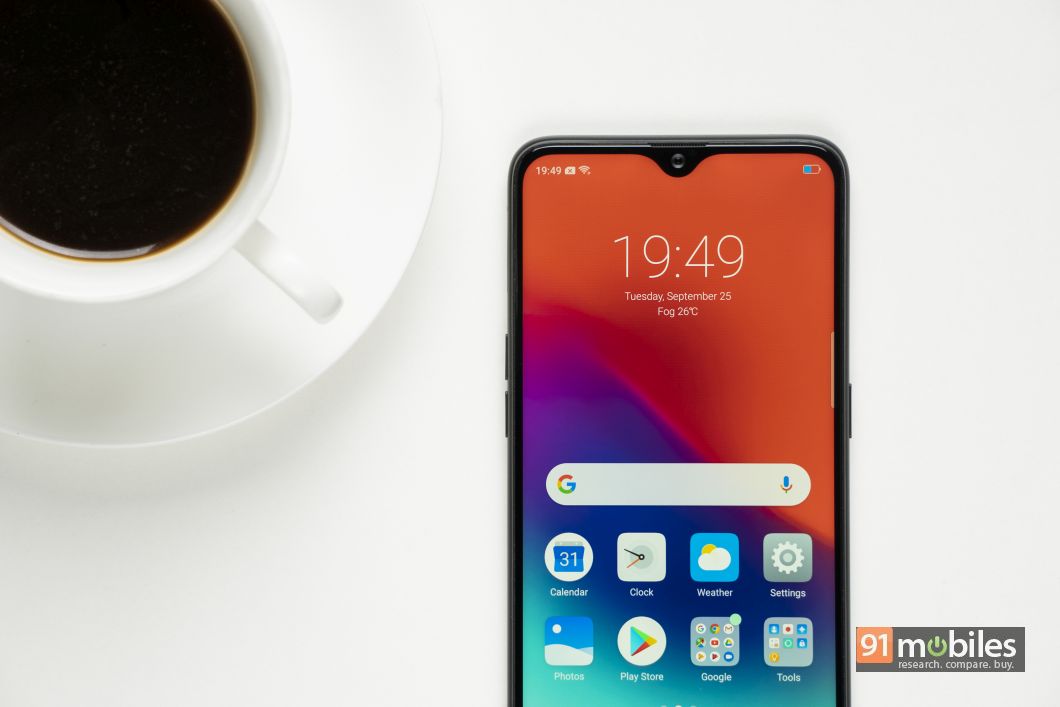 While all that’s good and dandy, the star of the show has to be the smartphone’s dew-drop notch, the likes of which you might’ve seen on OPPO’s F9 Pro (review) or the Vivo V11 Pro (review). Unlike other notch-based devices, the dew-drop notch on the Realme 2 Pro looks quite elegant and doesn’t take up a huge chunk of the smartphone’s display. Consequently, the handset boasts an impressive screen-to-body ratio of 90.8 percent. 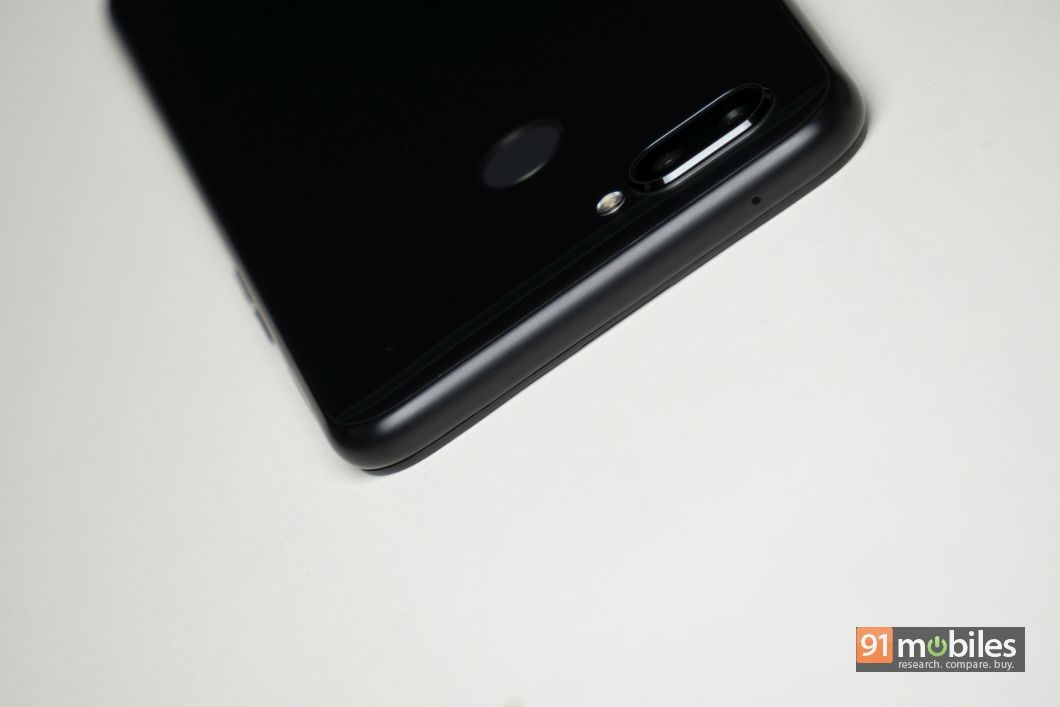 Unfortunately, not all apps have been optimised to play well with the smartphone’s unique cutout. For instance, when you open the Amazon app, the phone will automatically mask the notch inside a black bar at the top of the display. What’s more, the ‘fake’ bezel has noticeable jagged edges too, which will undoubtedly trigger your OCD. Thankfully, this is a software issue which can be resolved by means of an OTA update, so I’ll keep you posted if anything changes in the near future.

Let me tell you right off the gate – the Realme 2 Pro takes incredible pictures, second only to Xiaomi’s Mi A2 in its price segment. The smartphone ships with a 16MP selfie shooter with f/2.0 aperture towards the front, and comes with a dual-camera setup at the back. Now, while the primary shooter at the back features a 16MP, f/1.7 aperture, Sony IMX 398 sensor, the brand hasn’t disclosed any details about the assisting shooter. As per the company, the ‘‘secondary camera serves as a highly sensitive detector that is not involved in imaging. It is mainly tasked with measuring the spatial distance of photographed objects in the portrait mode.“ 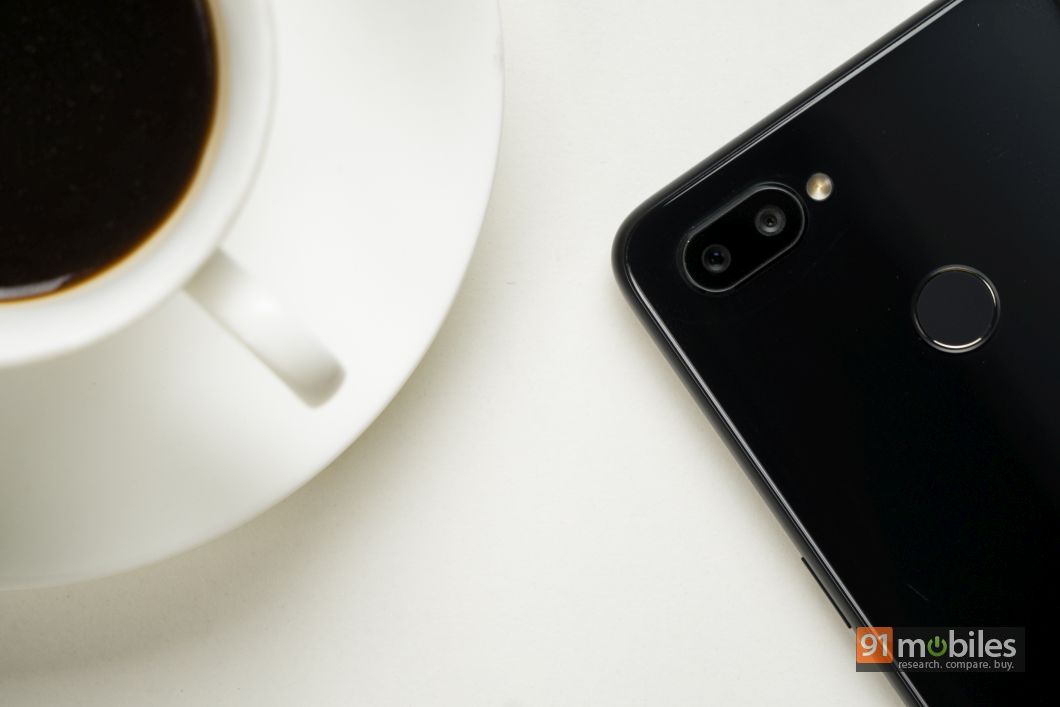 That said, I was extremely pleased with the quality of photos from the Realme 2 Pro. Much like OPPO’s offerings, the selfie camera on the Realme 2 Pro is a beast and the device captures excellent selfies with a ton of details. The colour reproduction is quite nice, provided you turn off the Beauty AI and the selfies I clicked with the device were evenly-exposed too. What’s more, despite not shipping with a dual-camera setup on the front, the smartphone can still click portrait selfies by some software trickery. The end result isn’t very flattering, as the blur effect creeps into the edges of the subject but it’s still a nice tool to have in your arsenal. 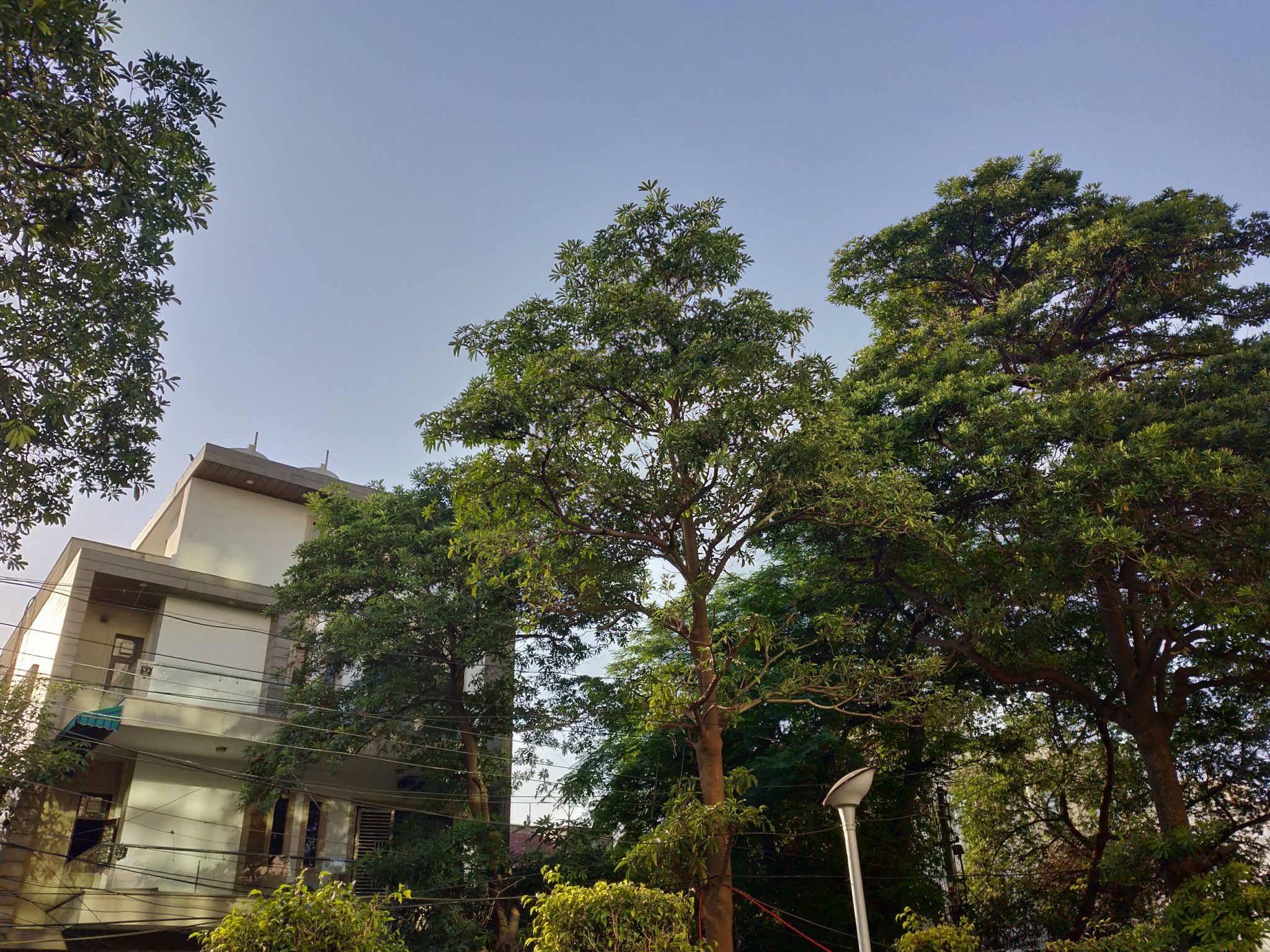 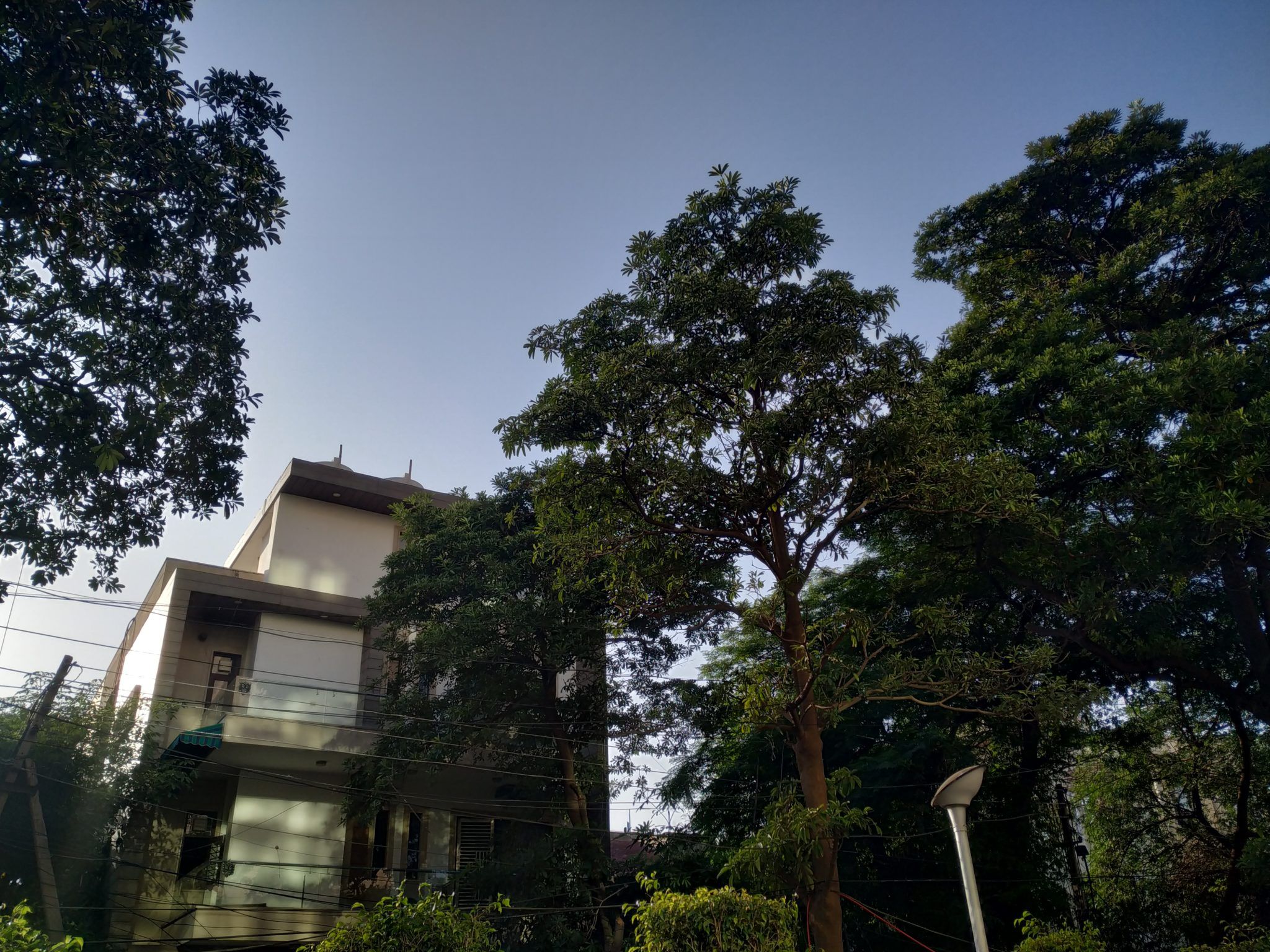 The dual rear-cameras on the Realme 2 Pro are fantastic shooters too, albeit fall behind Xiaomi’s offering. Under ideal lighting conditions, I noticed that the Mi A2 handled dynamic range a lot better than the RealMe 2 Pro. While the Realme 2 Pro makes the scene appear more pleasing by boosting up the saturation, the Mi A2 clicked truer-to-life pictures. Furthermore, upon zooming in, the Mi A2 retained more details in the macros and it was quicker to focus on a subject too. Lastly, if you’re a night owl with a penchant for photography, then you should know that the Mi A2 is a far better shooter under lowlight scenarios. Here are some images shot using the Realme 2 Pro.

With that said, if you do end up buying the Realme 2 Pro, then you won’t be disappointed with the handset’s camera prowess. The portrait mode on the handset is really good as it has a controlled and convincing blur effect. Turn the page over to landscape shots and you’ll be pleased with the details and the vibrancy of the image too. Moreover, unlike me, I’m sure your capture device is also going to be your display device. Therefore, so long as you’re not looking at the images you shot with the smartphone at a 150-percent crop, you probably won’t find many faults in the pictures.

Driving the performance on the smartphone is a Qualcomm Snapdragon 660 AIE octa-core processor which works alongside the Adreno 512 GPU. My review unit of the device shipped with a whopping 8GB of RAM and 128GB of UFS 2.1 storage, though you can pick the device up in 4GB/64GB and 6GB/64GB configurations too. 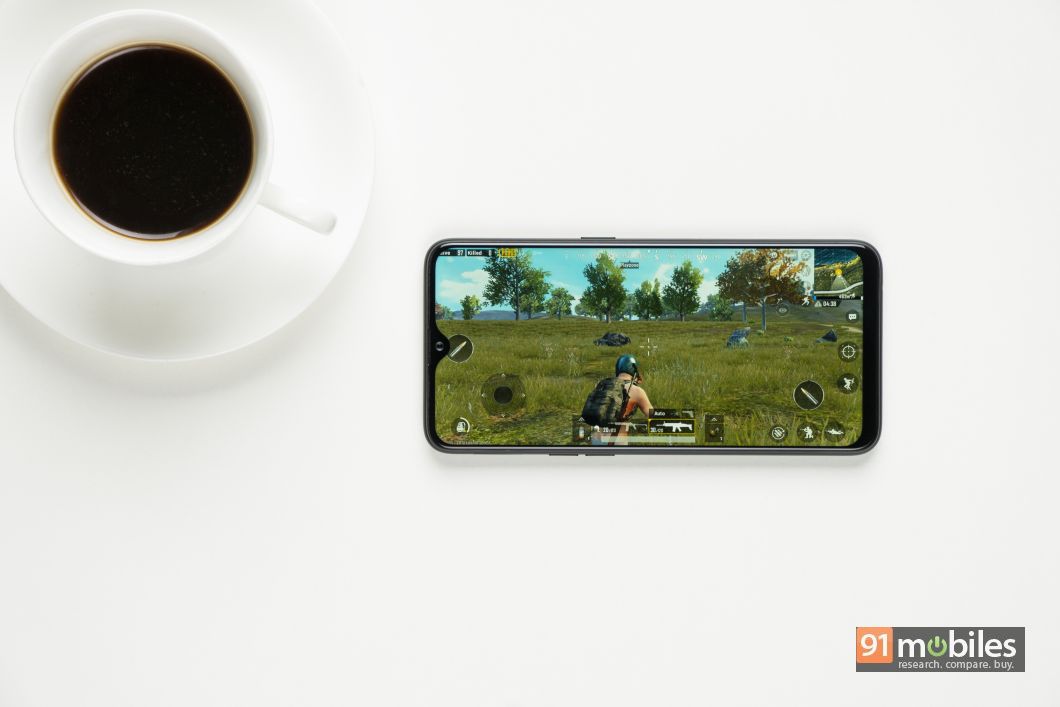 Unsurprisingly, the smartphone’s powerful specs translate into excellent day-to-day performance and I didn’t notice any hiccups during my time with the device. Apps opened swiftly, multi-tasking was fluid and navigating through the UI was buttery smooth too. I was pleased with the device’s RAM management as well, which allowed me to jump in and out of applications quickly without having to wait for them to load again. The Realme 2 Pro impressed me with its gaming capabilities too, and I managed to run PUBG at medium settings comfortably. Casual games like PigeonPop, Clash Royale and Leo’s Fortune were a walk in the park for the smartphone and everything considered, the Realme 2 Pro offers an excellent price to performance ratio.

For software, the smartphone runs Android Oreo 8.1 based ColorOS v5.2 out of the box. The overall interface remains the same as you might’ve witnessed on the brand’s previous offerings and therefore, I won’t go into too much depth here. Some notable features of the custom skin include the addition of a Smart Sidebar, which gives you quick access to various apps as well as some system shortcuts like screen recording. Overall, the software feels minimal, clean and doesn’t ship with a ton of bloatware, which makes it a win in my books.

The Realme 2 Pro sips juice from a 3,500mAh battery which lasted me a full day on heavy usage. And by that, I mean constantly texting friends on WhatsApp, staying connected on other social media platforms like Instagram and Facebook, listening to music for a good number of hours via Apple Music and watching some videos on YouTube. I threw in a couple sessions of Clash Royale too and yet, the smartphone still had around 20 percent of juice left by the time I hit the bed.

For its starting price of Rs 13,990, the Realme 2 Pro is a solid smartphone. Not only is it the cheapest device to ship with Qualcomm’s Snapdragon 660 processor, but it also offers an impressive display and capable cameras.

Now, if you are confused between Xiaomi’s Mi A2 (review) and the Realme 2 Pro, then ask yourself if you value battery life over cameras or vice-versa. While the Mi A2 is a better shooter, the smartphone’s battery life falls short of Realme’s offering.

Everything considered, the Realme 2 Pro is a capable smartphone from the brand’s stables and consequently, gets a recommendation from me. Just make sure to pick up the 6GB RAM variant of the device which retails for Rs 15,990, as it should offer the same performance and will save you some hard-earned bucks. That is, unless you’re a sucker for 128GB of built-in memory and don’t mind shelling out Rs 17,990 for the device.