“The Honor 10 is great for one-handed usage, something that cannot be said for most phones these days”

Huawei’s sub-brand Honor received a largely positive response from critics as well as users for last year’s Honor 9, which sadly never made it to India. Now, the brand has introduced the successor, i.e. Honor 10, and from the initial looks of the smartphone, the brand seems to be following the same formula as last year. To understand the product better and find out if the Honor 10 can actually give tough competition to the OnePlus 6 (review), which is a rightful heavyweight in this price range, read on our detailed review. 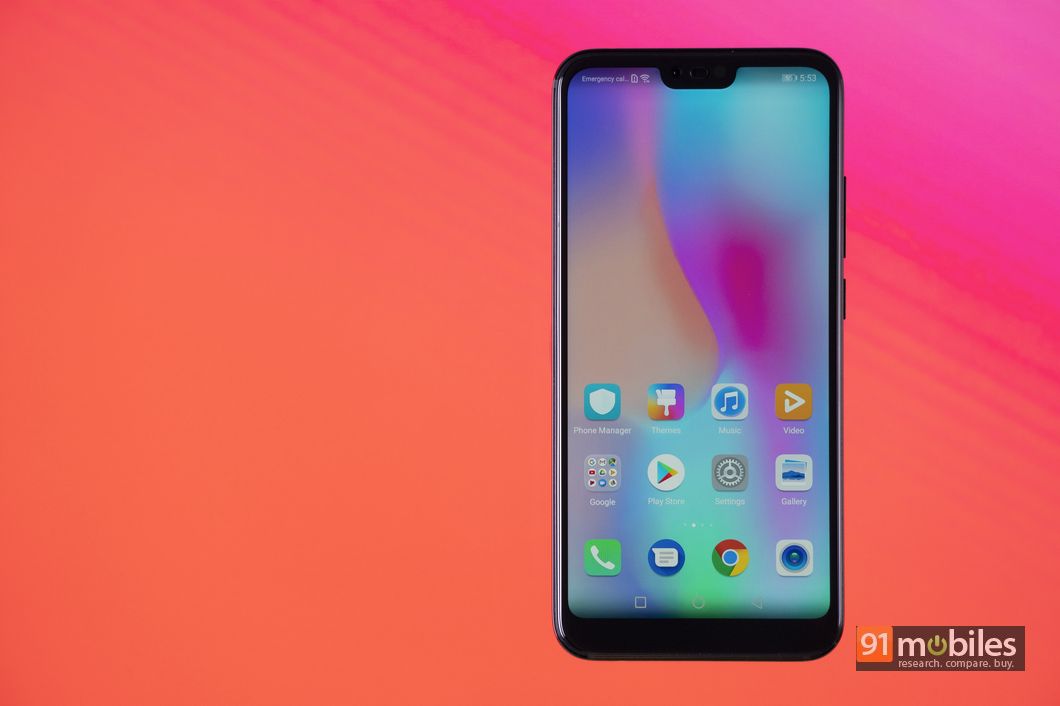 The Honor 10 comes with a reflective glass back, much like many other premium smartphones we’ve seen this year, and is being offered in Phantom Blue, Phantom Green, and Black colour options. Unfortunately, our review unit is the plain black variant, which is possibly the least exciting out of the three. However, the smartphone’s premium design comes across as one of its strongest points. 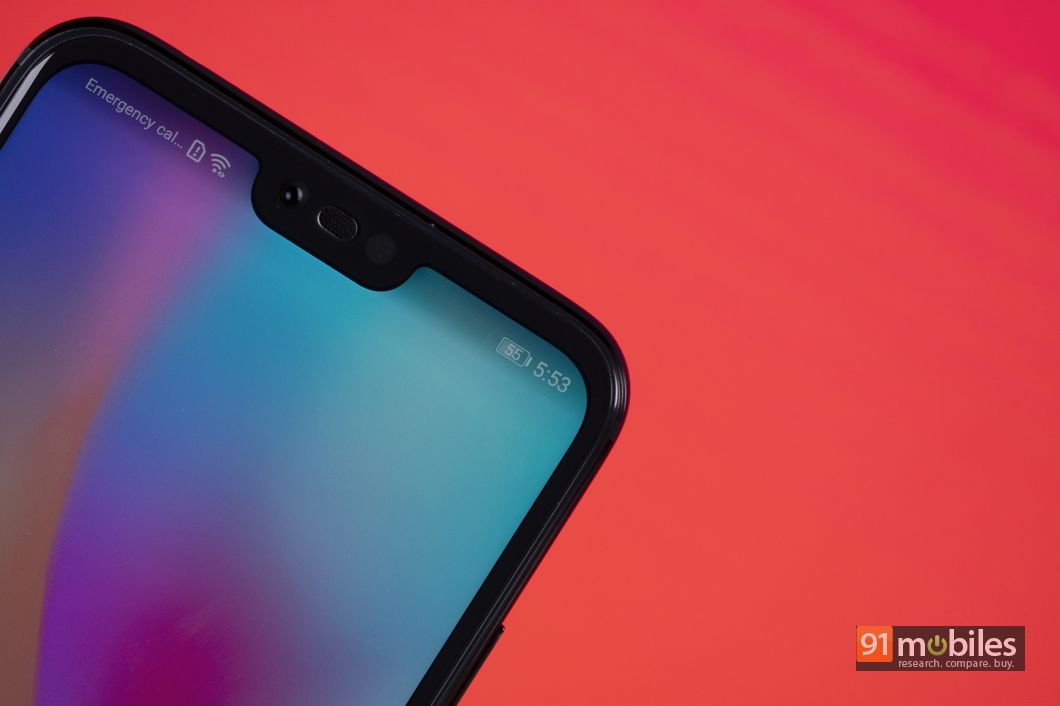 There is a hard-to-miss display notch at the front up top, which houses the front camera, earpiece, and a proximity sensor. Then there is an Ultrasonic fingerprint sensor on the bottom bezel below the display, that allows users to unlock the handset with ease. This ultrasonic fingerprint sensor, which is hidden beneath the glass panel on the chin at the front, can easily be missed by users at times as it is not distinctly visible and does not have a different texture on the glass above it as well. The dual camera setup is located on top-left at the rear, accompanied by an LED flash, and apart from the brand name and a rather ugly looking “AI Camera” branding, there is nothing else at the back. The power button and volume rocker are both placed on the right spine of the smartphone and the dual-SIM slot is present on the left. The bottom features the speaker grille, the micro-USB port, and a 3.5mm headphone jack, while the top of the handset sports an IR blaster that allows you to use the phone to control other appliances. 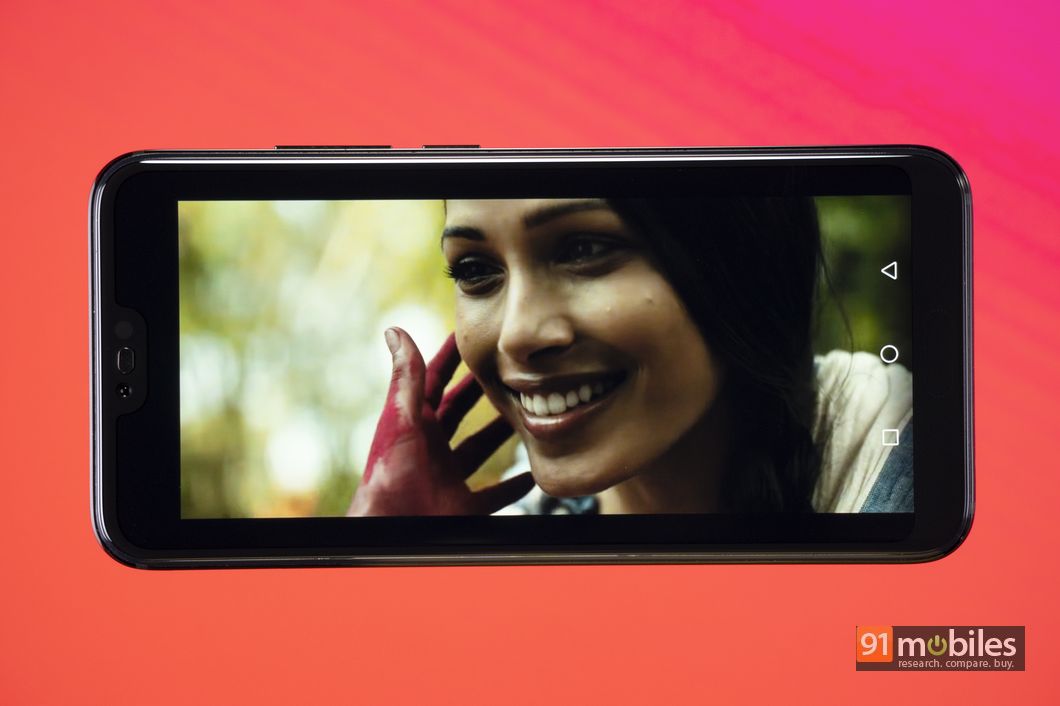 The latest from Honor features a 5.8-inch FHD+ (1,080 x 2,160 pixels) display with a taller-than-usual aspect ratio of 19:9 in order to house the notch. Despite a reasonably large screen size, the handset feels extremely compact in the hand, especially when compared with some of the other flagship handsets in recent times. As the handset is fairly light, weighing 153 grams, we had no issues carrying it around in the hand or in the pocket. Using Honor 10 with a single hand feels easy, something that cannot be said for most large screen phones these days. If we talk about the screen quality, we found the display on Honor 10 to be quite impressive. The display neither comes across as oversaturated nor washed out. The viewing angles, as well as the maximum brightness levels, are definitely not best-in-class but certainly good enough for most everyday scenarios.

The Honor 10 comes with a dual camera setup at the rear, consisting of a 24-megapixel + 16-megapixel sensors, accompanied by an LED flash. At the front, we have a 24-megapixel sensor for video calls and selfies. The biggest addition in terms of optics, just like many other recent handsets, is artificial intelligence. While the term AI is being thrown around in the industry quite a lot these days, Honor 10 uses it in an efficient manner that works towards increasing the quality of the picture without making it look unnatural. Admittedly, some of the pictures look oversaturated with the AI effect, in other cases, the images look drastically better than the original. The primary camera setup on the Honor 10 uses AI to recognise the subject type as well as the scene in order to produce a better image than the original. To be specific, Honor claims that the handset is capable of real-time recognition of more than 500 scenarios in 22 categories, with support for more categories coming later on. The built-in neural processing unit ensures that the implementation of AI produces effective results. 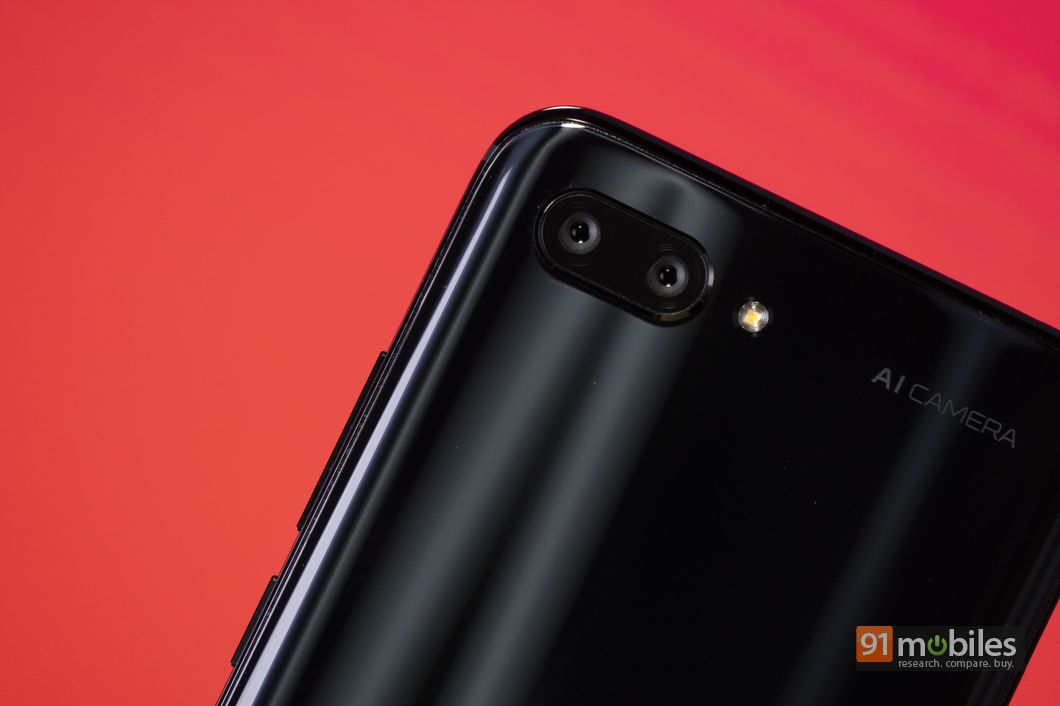 As a result, the images clicked with bokeh mode, through both front and rear cameras, look extremely impressive. There are options like Stage lighting, Classic lighting, Split lighting, Butterfly lighting, and so on. The default camera app itself provides users with a host of mode options including Slow-mo (up to 120 fps), Panorama, Light painting, HDR, 3D creator, Monochrome, among others. Stage lighting and Classic lighting notably resemble similar camera features on the Apple iPhone X, which allow users to cut-off the subject from the background and give an effect as though the subject is on a stage with a spotlight on. The Pro mode allows users to adjust ISO, shutter speed, EV etc. With AR lens, users get the options of trying out different AR stickers. Overall, we were impressed by the camera quality offered by the Honor 10 as the handset managed to click impressive pictures most of the times. The handset struggled ever-so-slightly in low-light conditions, we are nitpicking here, but in most other scenarios, the camera quality was reliable and consistent. If we talk about video recording, the rear camera setup is capable of recording videos at 4K resolution and the option for object tracking is capped at FHD+ resolution. The video quality offered by the handset was decent with EIS but implementation of OIS would have definitely made things much better. Check out our camera samples below to get a better idea about the camera quality:

The new handset from Honor runs Android 8.1.0 Oreo-based EMUI 8.1.0 as its operating system. The smartphone is powered by a capable HiSilicon Kirin 970 processor coupled with 6GB of RAM and 128GB non-expandable storage. Despite offering an ultrasonic fingerprint sensor up front, which works really well by itself, the company has also included a face unlock option for security. In our testing of the handset, the feature turned out to be blazingly fast as well as secure. The handset could be unlocked with facial recognition in poor lighting conditions as well. As you might expect from the customised OS from Honor, the brand has added some additional features like Huawei Histen, knuckle gestures to open certain apps or perform specific functions, Huawei Share, Mini screen view for one-handed mode etc. While the rest of the features seem self-explanatory, Huawei Histen allows users to add a little variety to regular songs by choosing from various playback modes like 3D, Natural, and Standard. Sadly, this feature mostly comes across as a gimmick rather than a meaningful addition. The App Twin feature allows you to sign in to two social media accounts on the phone. You can change the software-based navigation keys as per your liking and there are motion controls available too. 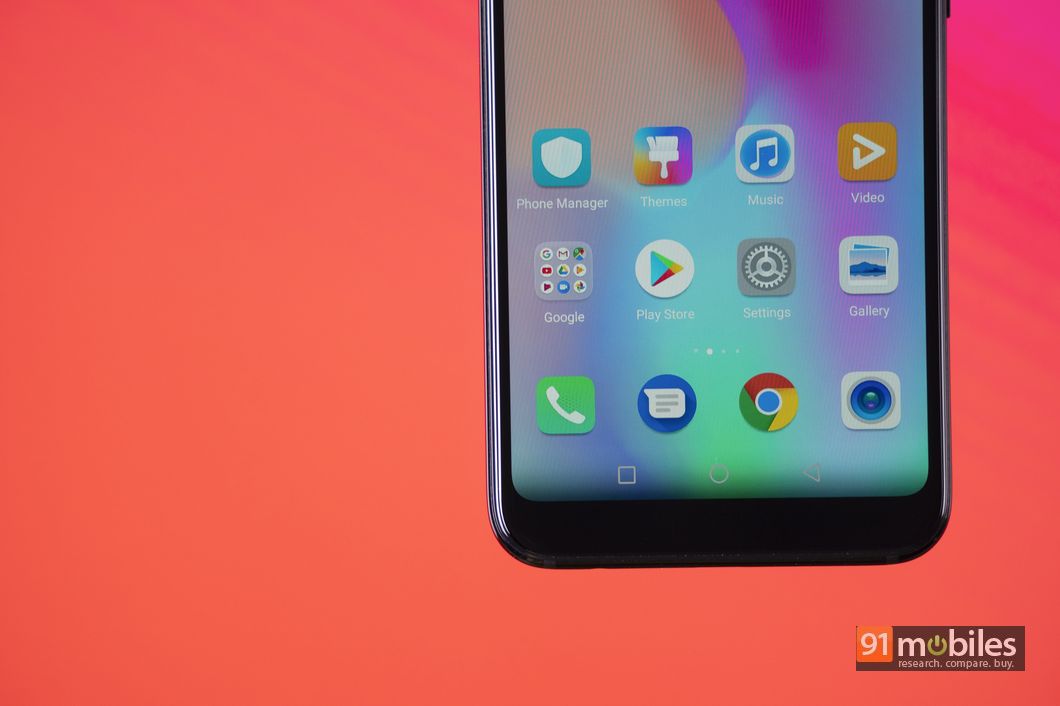 The spec sheet might have given you a hint but Honor 10 turned out to be a solid performer in our testing. The handset managed to run PlayerUnknown’s Battlegrounds, a graphically intensive mobile video game, at high settings with ease. After extensive gaming, the smartphone got slightly warm but as it has a glass sandwich design, that doesn’t come as a surprise. However, it is worth pointing out that the smartphone never got heated up to uncomfortable levels. The processing power allows users to breeze through the platform and we never had a single stutter or lag issue while navigating through the OS. The handset comes with a USB type-C charging port that supports fast charging. 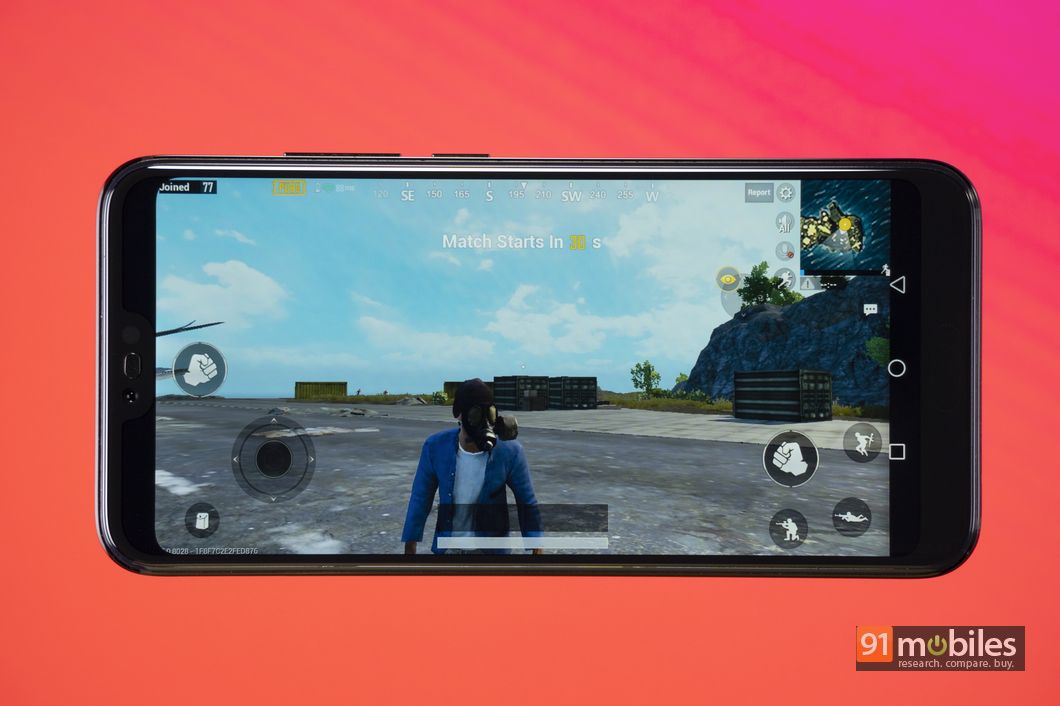 The Honor 10 houses a 3,400mAh battery and the brand has offered some nifty tools to get the most juice out of the available capacity in hand. Users can choose to decrease screen resolution from FHD+ to HD+, much like on recent Samsung smartphones, and an Ultra Power Saving mode leaves you with the most basic apps like Dialer, Messages, and Contacts, again like on Samsung phones. In our HD video loop test, the handset managed to last 12 hours. If we talk about real-life usage, the handset managed to retain battery life efficiently in the standby mode and should likely last for most users through the day, though power users might be left wanting. Considering that there are other handsets that offer better battery life in the same or even lower price range, this can be deemed as one of the weak points of the smartphone.

The Honor 10, by all means, is a compelling smartphone, especially for its price range. However, if we compare the handset with the newly launched OnePlus 6, the latter boasts a Snapdragon 845 SoC, which is definitely better from a long-term perspective and makes it future proof. The Ultrasonic fingerprint sensor and compact form factor do give an edge to the Honor 10, but the OnePlus 6 offers a performance that is hard to match, even by most premium flagships. Interestingly, OnePlus is among the very few handsets that have been approved by Google for the Android P beta, which essentially ensures that the handset will receive future OS upgrades faster than many other phones, including the Honor 10. If we talk about camera performance, OnePlus 6 has a slight edge in its favour but the Honor 10 definitely doesn’t lag too much behind either. Further, the Dash charging feature provides an upper hand to OnePlus’ latest flagship too. If we talk about the brand’s own Honor View 10 as competition, you get an Ultrasonic fingerprint sensor and the popular/unpopular notch design for a slightly higher price with the new offering. Overall, the Honor 10 is an interesting smartphone that gets many things right, but might fall just short when competing with the formidable competitor, i.e. the OnePlus 6.