91mobiles.com
Home Reviews OPPO F9 Pro Review: a stylish phone that could do with some...

Over the last few years, OPPO has become a household name in India. The brand’s presence has grown substantially in the country and we have already seen multiple OPPO phones launched this year across price ranges. Notably, most of the new phones under the brand featured a notch display design. With the all-new OPPO F9 Pro (first impressions), the Chinese company has completely revamped the implementation of the notch design to offer more screen-to-body ratio than most other phones out there. 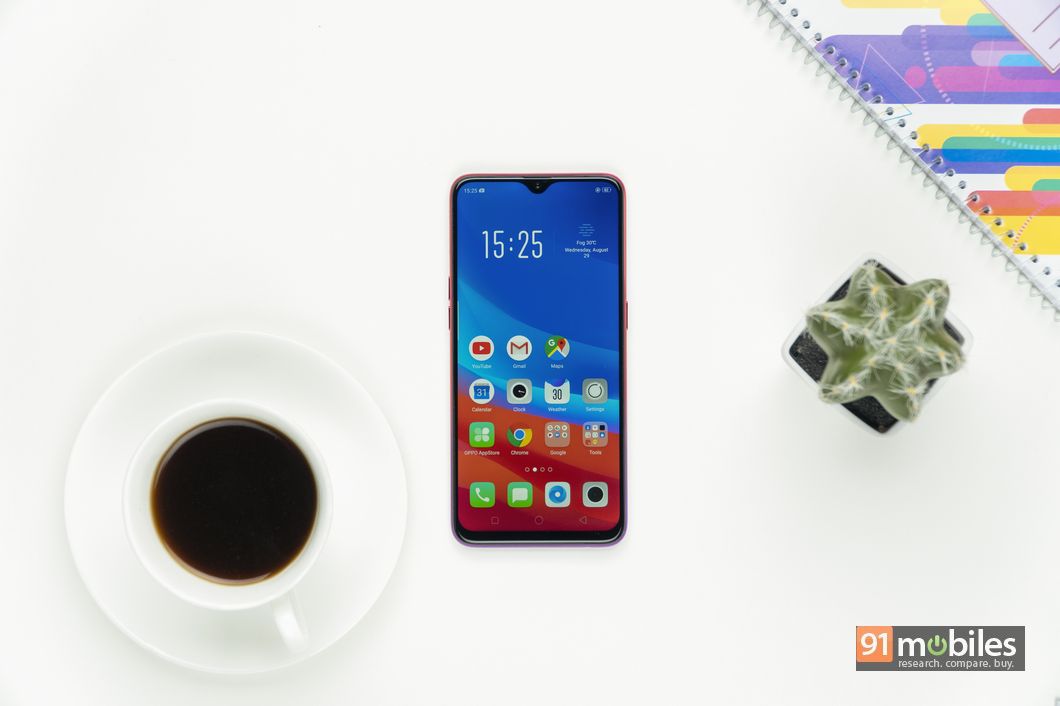 For better or for worse, the OPPO F9 Pro looks somewhat similar to the brand’s other handsets like the A3s and A5, at least from the rear. The F9 Pro has been launched in Twilight Blue and Sunrise Red colours in India. The blue variant is rather subtle and does not stand out, unless put under direct sunlight, where you would be able to see a rhombus-shaped pattern at the back. On the other hand, the Sunrise Red model will immediately grab eyeballs. The F9 Pro ships with a glass sandwich design and has a glossy finish on the sides. The pill-shaped fingerprint sensor is placed slightly above the middle at the rear, right above the branding, and sits nicely beneath the index finger when using the phone with one hand. 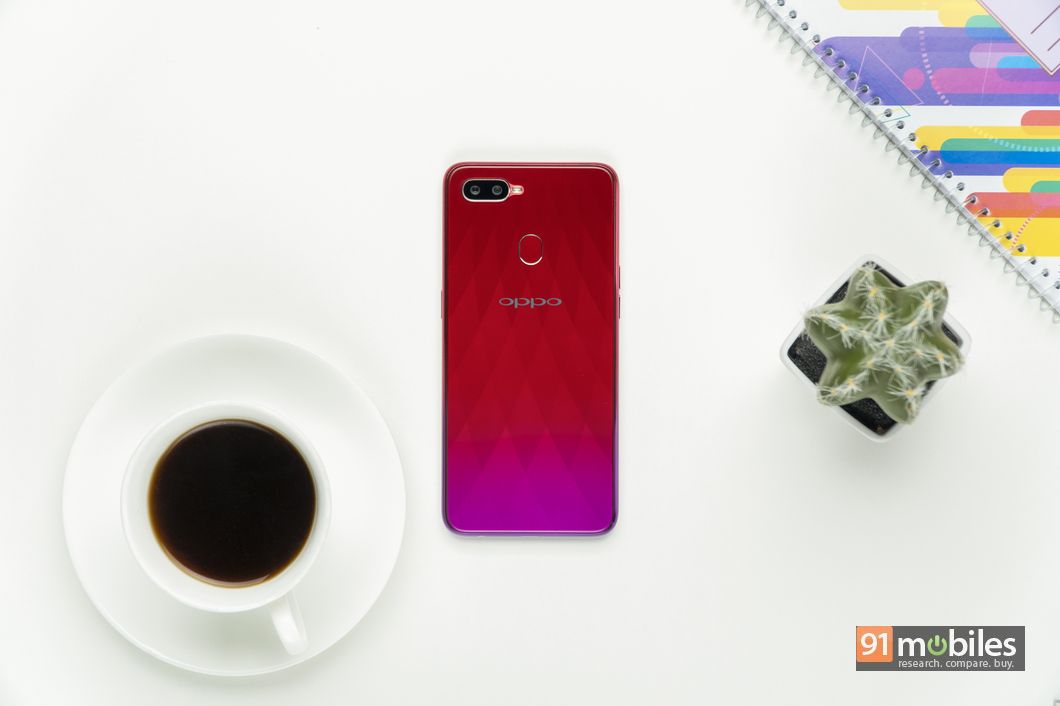 There is a SIM card slot on the left spine and the bottom of the handset consists of a 3.5mm headphone jack, a micro-USB charging port (we were hoping for a USB Type-C port, given the mid-range pricing of this phone), and a speaker grille. In regular usage, the glass back on the handset turned out to be a fingerprint magnet and the metallic sides make the handset a tad bit slippery. 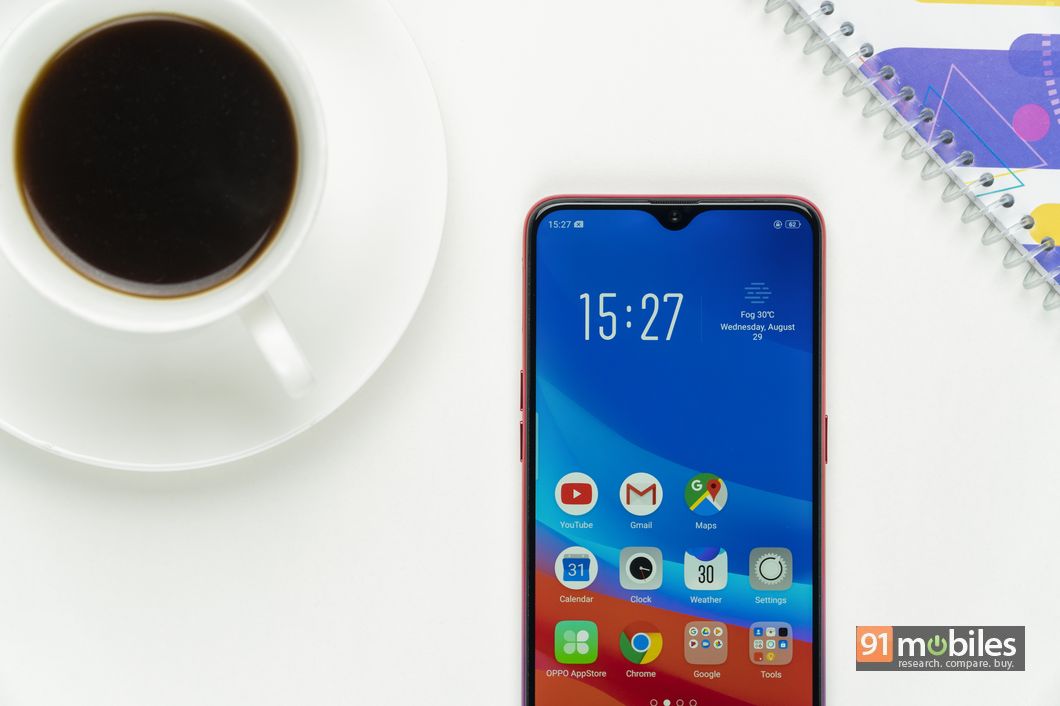 Now let’s talk about the most interesting aspect of the phone – the display design. OPPO F9 Pro comes with a waterdrop notch design, which essentially houses just the front camera, with the earpiece located right above the camera sensor. This definitely helps the handset in offering an amazing screen-to-body aspect ratio without going for a motorised component like the Vivo NEX (review) or the OPPO Find X. In our time with the phone, we found that the smaller notch feels odd at first but once you get used to it, there are no issues whatsoever. While watching videos, you will actually be glad that the notch does not end up taking a whole lot of the screen’s real estate. Here’s a closer look at the phone’s design:

The F9 Pro packs a 6.3-inch FHD+ display with a screen resolution of 2,340 x 1,080 pixels. Without a doubt, the F9 Pro comes with one of the most vibrant panels on the phones that we have reviewed recently. The display comes across as sharp but the peak brightness levels can sometimes prove to be an issue. In our time with the handset, we faced slight trouble seeing the screen contents in outdoor conditions under the sun. The viewing angles are good, in case you are concerned. If you like watching movies or music videos on your phone all the time, you won’t be disappointed by the F9 Pro.

A good phone needs to get its cameras right, and there are no two ways about it. Before we talk about the camera performance offered by the OPPO F9 Pro, let’s get the specifications out of the way. The handset comes with a dual camera setup at the rear, consisting of a primary 16MP sensor and a 2MP secondary sensor, assisted by an LED flash. At the front, you get a high-res 25MP sensor for taking selfies and video calling. There is no LED flash on the front, but you do get a screen flash feature to help with shooting selfies in dim lighting. 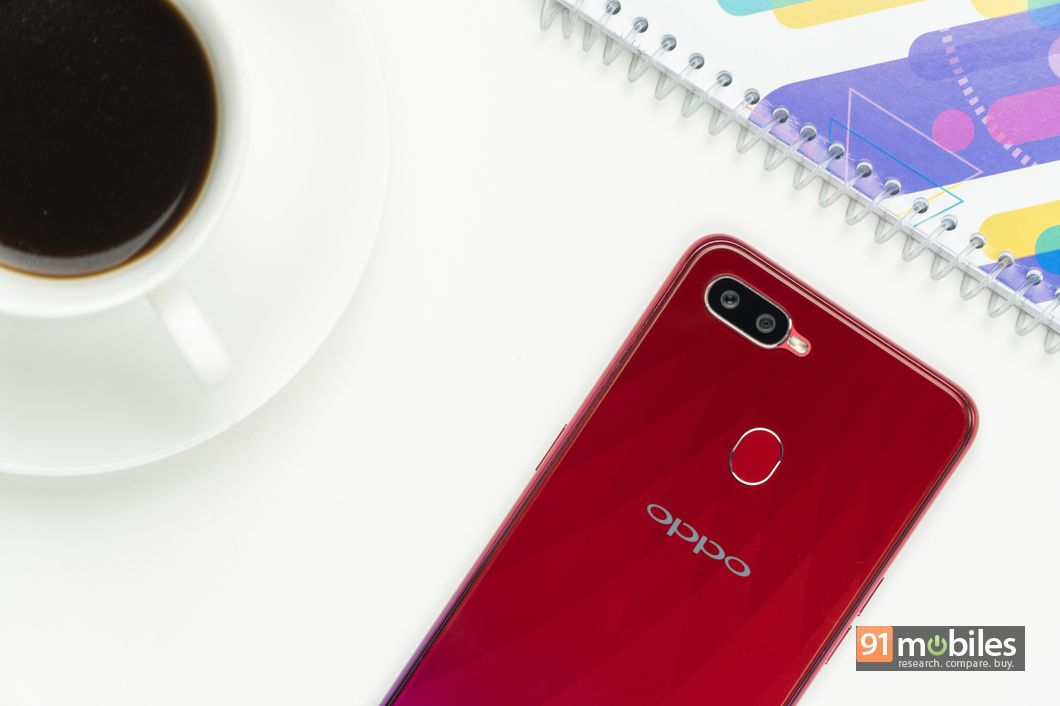 Now that we have talked about the specs on paper, let’s discuss the real-world performance. The dual camera setup on the F9 Pro manages to take some really good pictures, with detail and good dynamic range, given that it is provided with apt lighting conditions. The low-light performance offered by the phone is not exactly a benchmark as there is some noise in the images. However, in most other conditions, the F9 Pro ended up taking some brilliant pictures. Things get even better when we move to the selfie camera. To put it simply, the F9 Pro might just have one of the best selfie cameras in its price range, which is not a small statement. The front camera captures amazing detail without compromising on the skin tone. As OPPO has been a strong player in the selfie camera smartphones, it does not come as a surprise that the F9 Pro carries forward the brand’s reputation in the performance offered by front-facing cameras.

The default camera app on the F9 Pro comes integrated with the Google Lens, which allows you to scan text, shop for things online, and discover things online using the handset’s camera. You get various modes including Portrait, Sticker, Slo-mo, Time-lapse, Pano, and Expert. The Expert mode, as you might have guessed already, works similar to the Pro mode found in other phones and allows for you to adjust the ISO and white balance among other things.

There is an AI-assisted beauty mode that features levels from 1 to 6. Modes like Super Vivid and HDR are also there, available directly in the camera viewfinder. Right beside the beauty mode option, you also get different filters to choose from. In the video mode, you can shoot the clips in up to 1080p resolution. Here are some camera samples:

The OPPO F9 Pro is powered by a MediaTek Helio P60 processor, coupled with 6GB of RAM and 64GB of built-in storage, which can be expanded by up to 256GB via a microSD card. To give you a better perspective, the base variant of Realme 1 is currently priced at Rs 8,999 and features the same processor. Keeping that in mind, the F9 Pro could have been equipped with a more powerful processor by the company. Having said that, we did not face any major issues in terms of the actual performance offered by the smartphone. We managed to play PUBG, which can be particularly demanding at times, at medium graphics settings with ease. At high graphics settings, the smartphone presented some stutter issues but the game still remained playable. 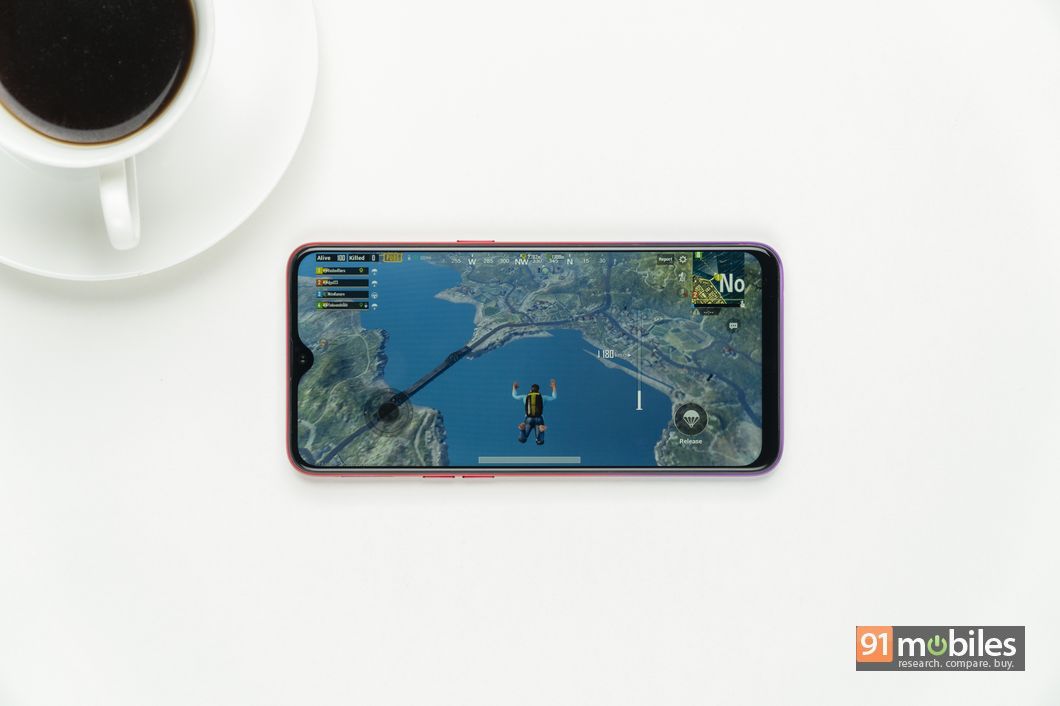 The handset runs Android 8.1 Ore-based ColorOS v5.2 out of the box. There is a Game Space feature, which works towards optimising the phone’s gaming performance by freeing up some memory and offering graphics acceleration. Similarly, just as you would expect from the company’s proprietary OS, you get some preloaded utility tools, smart assistant, and security features like Kids Space and Private Safe. There are toggles for Google Assistant, Calculator, and some other utility tools as well in the notification shade.

This has been said in abundance but in order to get rid of notifications, you need to swipe first and then tap on the bin icon, which is an extra step that is not required in most other UIs out there. If you are moving to the F9 Pro from iOS or a stock Android phone, these small things might end up annoying you while using the phone in general. 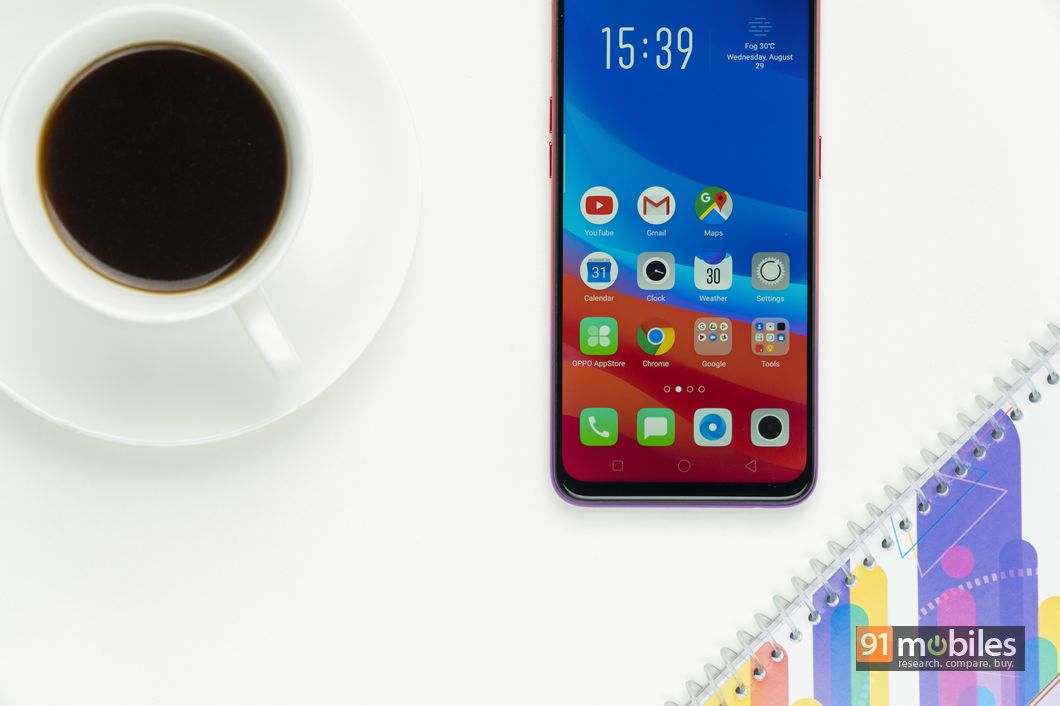 The OPPO F9 Pro houses a sizeable 3,500mAh battery, which has almost become a standard size for the smartphones with 6-inch or larger displays. For us, the F9 Pro managed to last a day of normal usage with ease, thanks to the background app management offered by the handset. 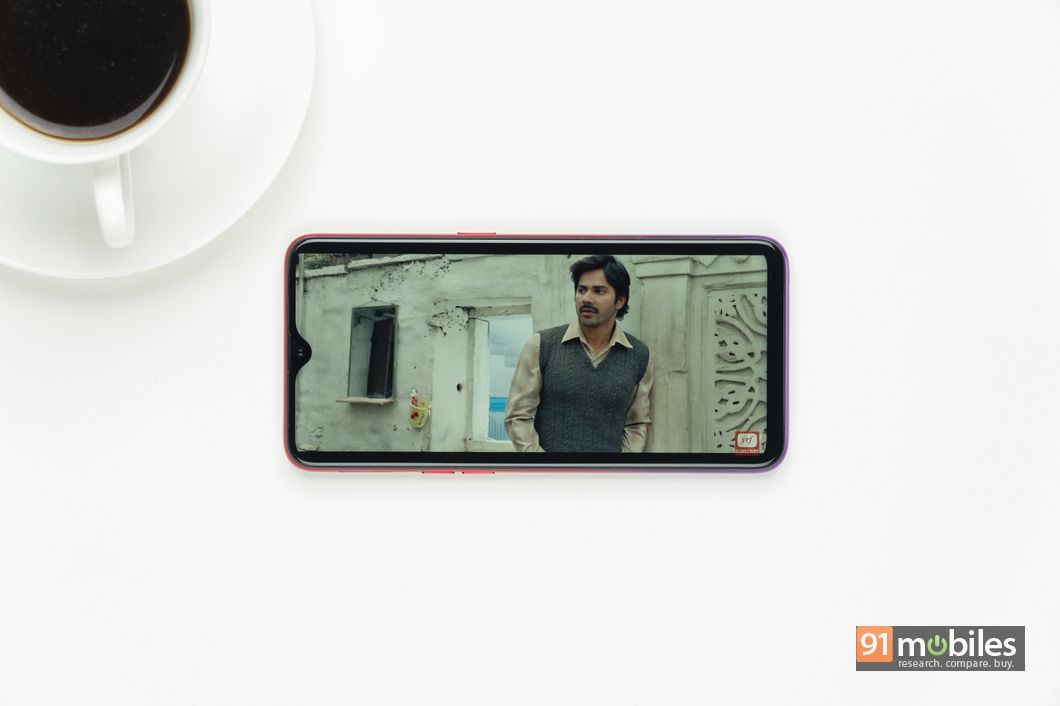 In our HD video loop test, the smartphone managed to last around 16 hours, which is an impressive feat by all means. This means, if you like to travel a lot and watch movies on road, the F9 Pro can serve to be a great companion.

To sum the review up, the OPPO F9 Pro offers good camera performance and display quality. The waterdrop notch design is an interesting way of delivering a good screen-to-body ratio and this implementation works in favour of the smartphone. However, if we look at the competition, the POCO F1 (review) and Honor Play (review) come with much better processors in the same price range. Vivo’s V11 Pro (review) has a similar waterdrop display design like the OPPO F9 Pro, and trumps the latter with a better processor too. Even though the F9 Pro has a lot going for it, the value-for-money offered by the first handset from Xiaomi’s sub-brand POCO and the gaming smartphone from Honor trumps the OPPO offering with ease. If the handset featured a better processor, the F9 Pro could have given the other offerings a run for their money but in the current state, we are definitely left asking for more.