A while ago, consumers would buy a smartphone for the brand, and not the product. But, with the Chinese incursion, it was getting harder and harder to turn down a high-specced phone for say, a relatively lower-end handset from a big-name brand. Fast forward a couple of years and Chinese OEMs have taken the market by storm, launching one compelling device after another. Case in point, the Realme 5, which was announced recently in India and ships with a total of five cameras, a brand-new processor from Qualcomm and a beefy battery, all for under Rs 10K. 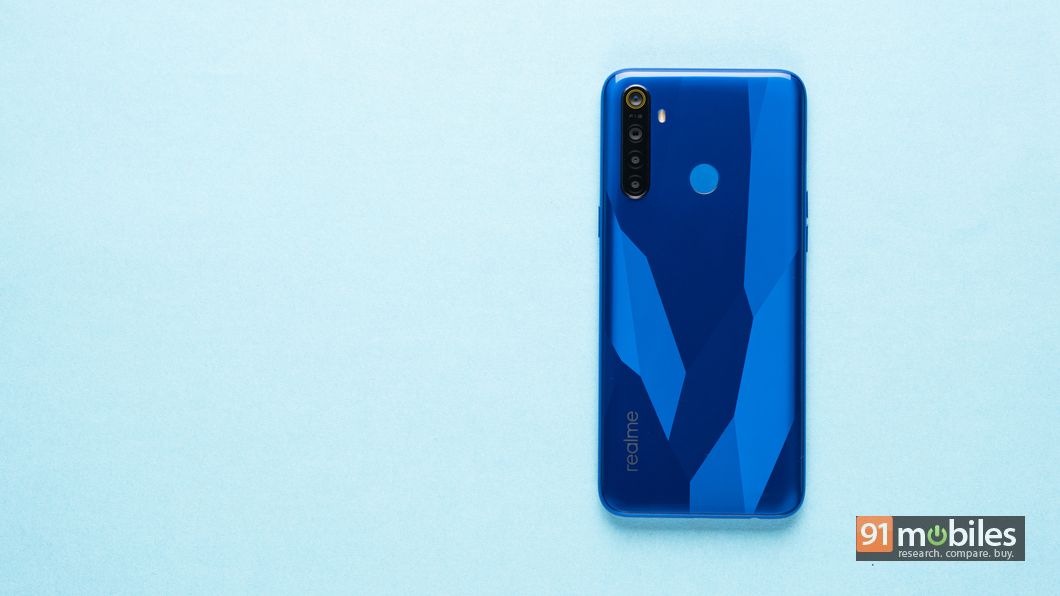 On paper, the handset is clearly as loaded as it gets, but do the specs translate into a surreal real-world experience? To find out, I put my SIM in the Realme 5 and here’s what I make of it.

Realme has stuck with the tried-and-tested formula and has encased its latest offering in a glossy polycarbonate shell. The back of the device sports the company’s signature diamond-cut pattern, which from certain angles, resembles shards of broken glass. That, coupled with my review unit’s Crystal Blue colourway, puts forth a handsome package which in my opinion, is unrivalled in the budget segment. 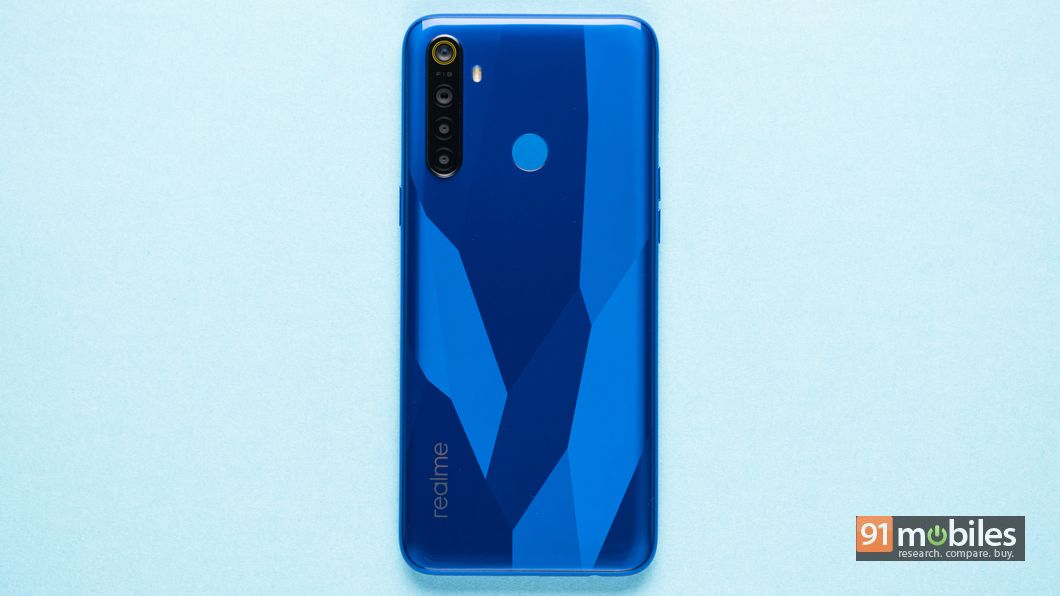 While the Realme 5 is a looker, the handset is quite big and heavy. Correspondingly, the device is a two-hand phone, and you’ll struggle to operate it single-handedly. That’s not to say that it’s unwieldy per se, as the device’s subtly curved back ensures a comfortable grip in the hand. Moreover, the handset boasts excellent weight distribution too and it didn’t feel top-heavy during my usage either. However, I did struggle to reach the top corners of the display owing to the smartphone’s tall and narrow frame. 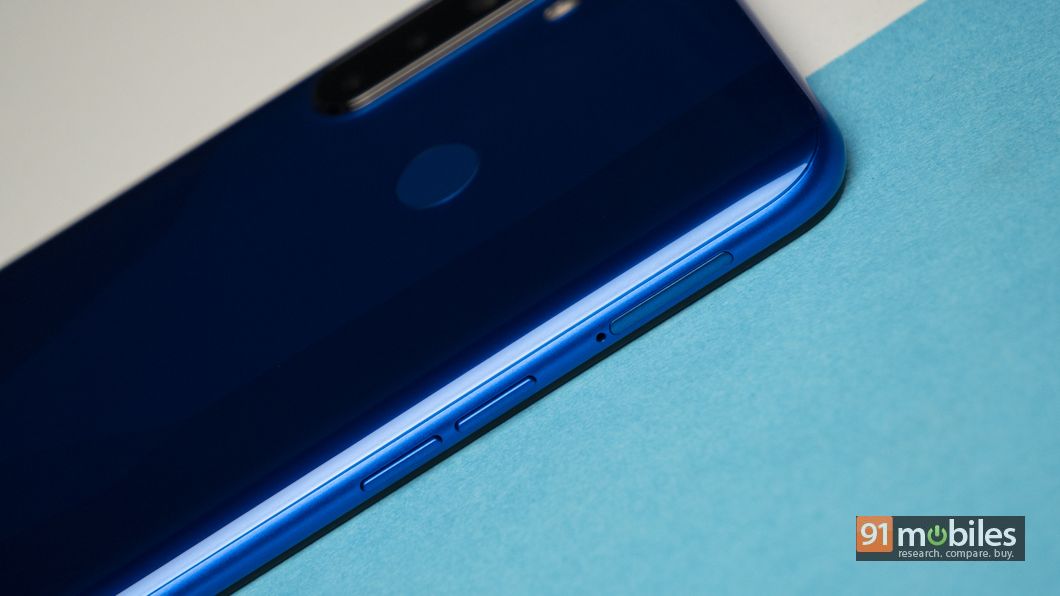 Barring that, the design of the Realme 5 is as functional as it gets. The power button and the volume rocker take up space towards the middle of the right and the left-hand side of the frame, thereby making them within your thumb’s reach. The smartphone ships with a capacitive fingerprint sensor towards the back, which too has been positioned ergonomically. What’s more, the sensor is among the fastest I’ve tested in the sub Rs 10K range, and I seldom had to tap my finger twice for it to register my input. 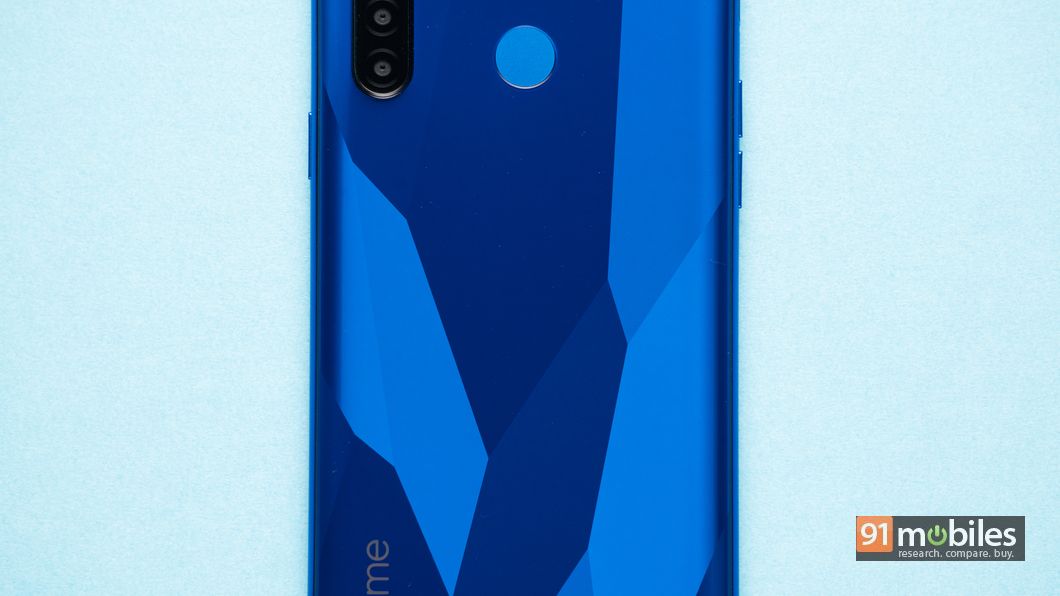 Speaking of security, you also get face unlock with the device, which worked surprisingly well. The handset even offers a ‘lift to wake’ function, which paved the way for a seamless unlocking experience. Come to think of it, I relied on the Realme 5’s face unlock more than its fingerprint sensor, which speaks volumes about the former’s accuracy and consistency. 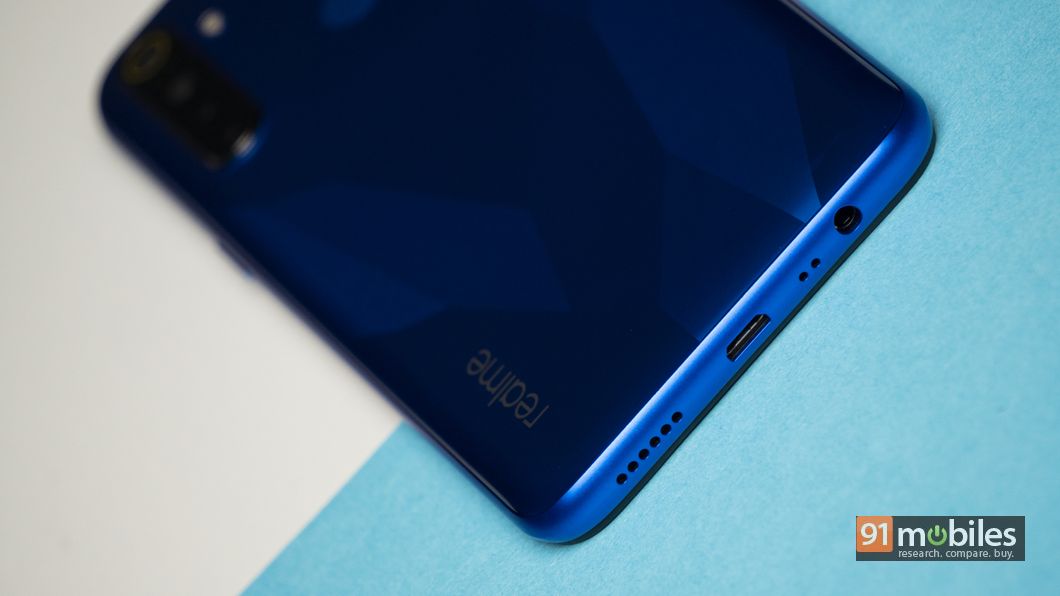 For charging, the Realme 5 ships with a micro-USB port which usually is a big no-no for me. However, considering the smartphone’s affordable pricing, I’m willing to give the company a pass this time around. On the bright side, the phone features a headphone jack at the bottom, which should pair up nicely with the brand’s recently-launched Realme Buds 2. 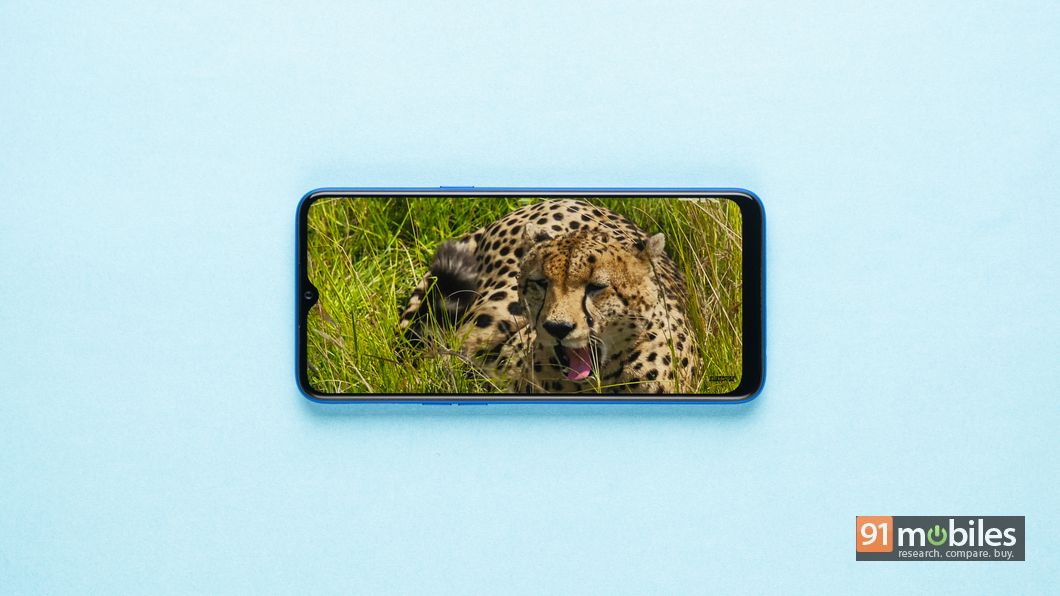 The Realme 5’s window to the world is a 6.5-inch HD+ IPS display. The panel features a dewdrop notch at the centre, along with narrow bezels towards the sides, paving way for an immersive media consumption experience. Unfortunately, the display isn’t as sharp as what you’d get with say, the similarly-priced Redmi Note 7s. Furthermore, the handset doesn’t come with Widevine L1 certification and that means, you’ll be locked to SD content from streaming services like Netflix. That’s quite a bummer, as it deterred me from enjoying my favourite movies and TV shows on the smartphone to the fullest. On the bright side (no pun intended), the display boasts good sunlight legibility, so you should be able to comfortably view the content on the screen even if it’s sunny outdoors.

The Realme 5 has a lot of things going for it, but its headlining feature is undoubtedly the presence of a quad-camera setup on the back, which is unheard of in the budget space. Specs-wise, the smartphone features a 12MP main shooter which has been paired with an 8MP wide-angle lens, a 2MP ultra macro lens, and a 2MP depth sensor. For selfies, the device comes equipped with a 13MP front-facing camera. 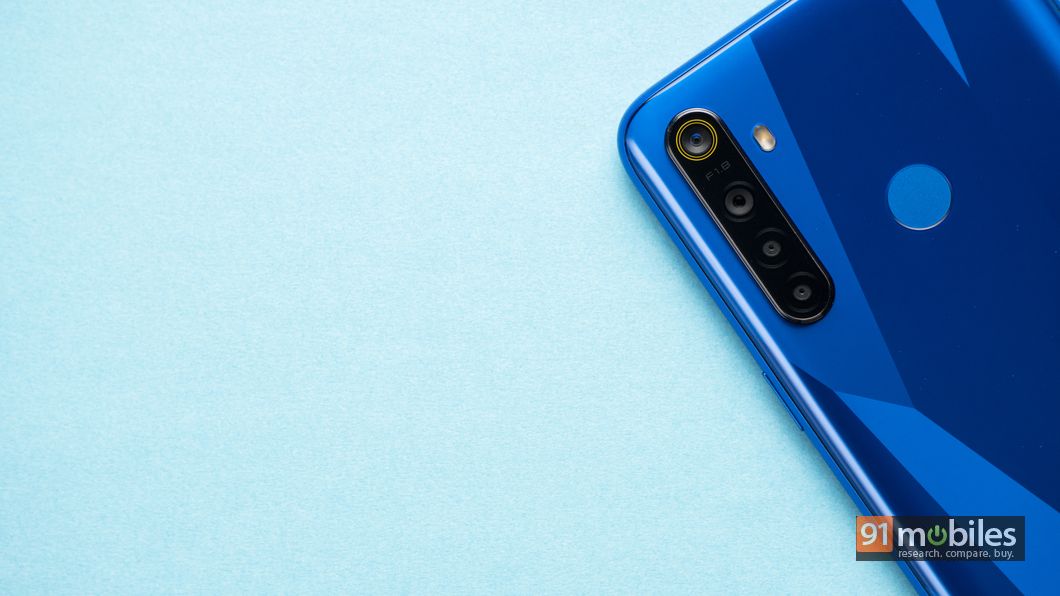 But, how do these camera specs translate into real-world usage? Well, allow me to explain…

1. The Realme 5 clicks brilliant photos during the day which are ripe in details and flush with colours. The caveat is that the phone clicks oversaturated photos to begin with and therefore, you might want to turn off HDR and the company’s Chroma Boost feature when it’s bright and sunny outdoors.

2. The 12MP shooter is quick to focus on a subject, and the shutter speed is snappy too. I managed to click a scenic photo of a foot over bridge whilst commuting in a cab, and the image turned out to be great – the shot wasn’t blurred, and the handset managed to resolve the details in the sky, all in a fraction of a second.

3. The smartphone clicks stunning selfies too, albeit doesn’t quite hit the nail on the head as far as the skin tones are concerned. You see, even with the beautification turned off, the selfies still exhibited lighter skin tones, redder lips, and so on. You can edit the pictures via a third-party app and get the desired look, but that’s an extra step you’ll have to take every single time.

4. The performance of the wide-angle lens is great for the price too. While there’s a noticeable fish eye effect and distortion along the edges of the shots, the images retain their sharpness to a certain degree and the colour reproduction is spot on. The Ultra-Macro lens, on the other hand, is downright unusable and try as I might, I couldn’t get any serviceable shots with the sensor as the images were too grainy. 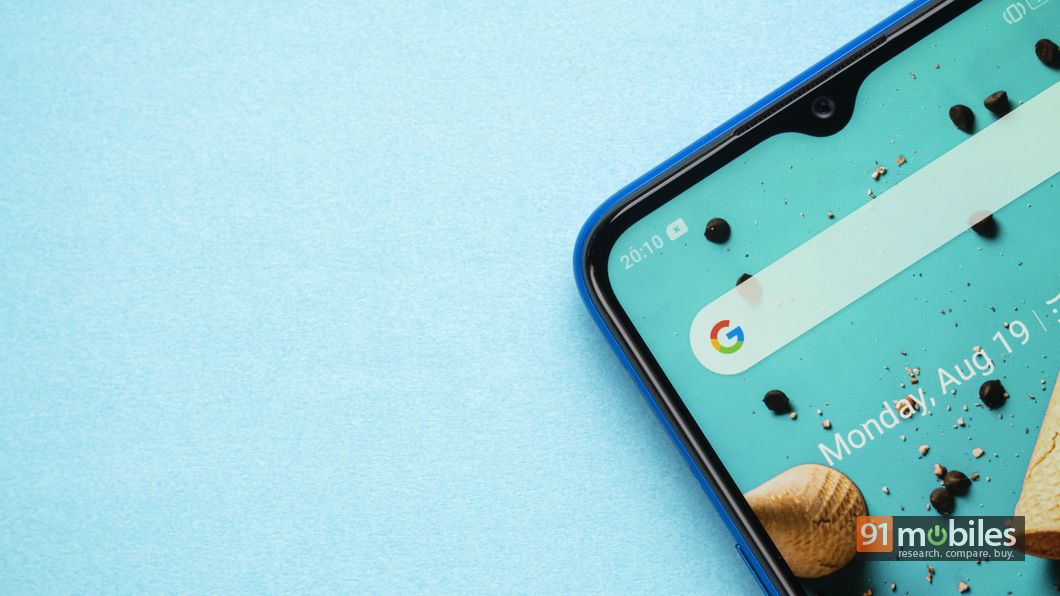 5. Adding to the list of pros, you can use the Realme 5’s portrait mode to add flair to your shots. The blur effect is reasonably consistent across the borders of the subject too, so no major complaints here. That said, the portrait mode for the selfie camera creates artefacts around a subject’s face, which is quite common in smartphones retailing in the budget segment. I’ll keep you updated should the company address this issue by means of a software update down the line, so stay tuned. 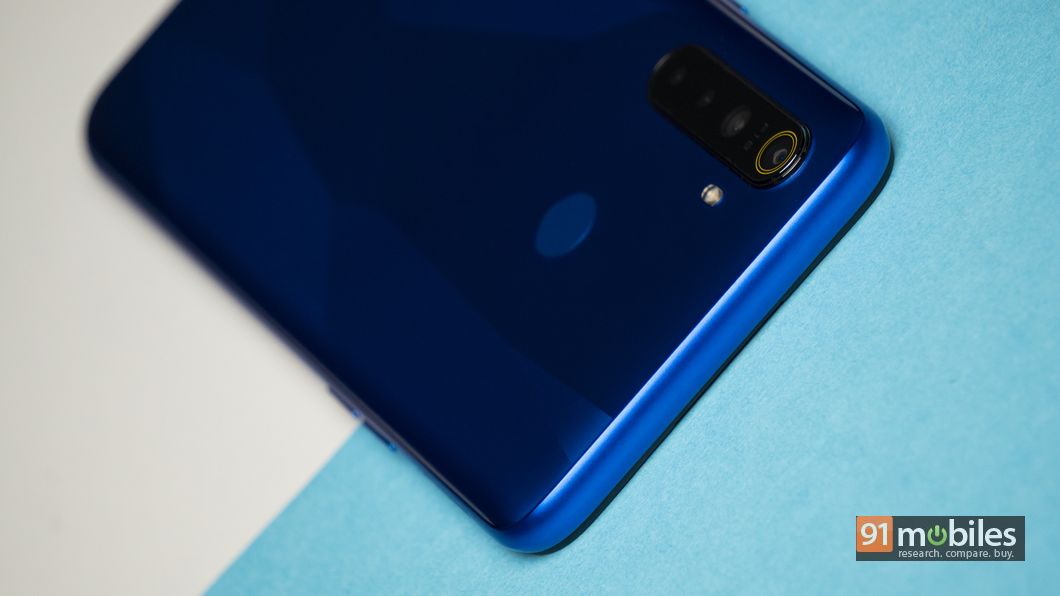 6. The low-light performance of Realme 5’s 12MP rear camera is nothing to write home about. The handset includes a built-in nightscape mode, which somewhat brings out the details from the shadows. Unfortunately, the photos shot at night are still flush with noise, so you’ll have to keep your expectations in check should you buy the phone. On the flip side, the screen flash feature assisting the selfie-camera ensures buyers can click a vivid selfie even after the sun has set.

All in all, the Realme 5’s camera prowess doesn’t leave much to be desired. The handset’s cameras perform admirably across situations and the smartphone will surely bring out the photographer in you.

The Realme 5 is the first smartphone in the country to be powered by Qualcomm’s octa-core Snapdragon 665 processor. The SoC comes as an upgrade to last year’s Snapdragon 660 chip, and is built using an 11nm manufacturing process making it more powerful and battery-efficient than its predecessor. For RAM and storage, the Realme 5 offers buyers three different configurations, including a 3GB / 32GB model, a 4GB / 64GB model and a 4GB / 128GB variant. 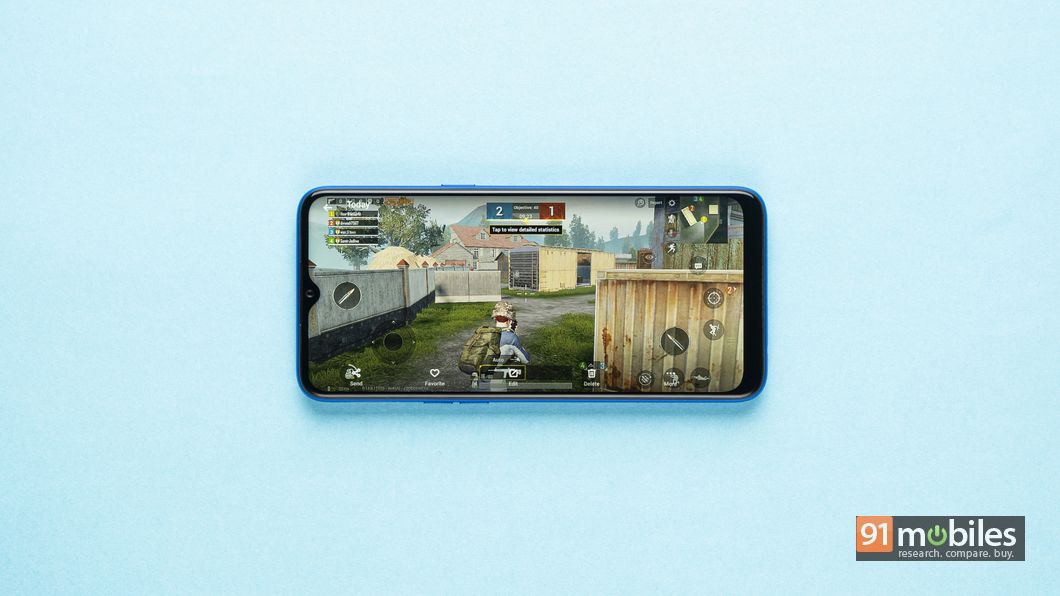 Coming to the meat of the matter, the Realme 5 performed admirably during my time with the phone. To be clear, I was testing the handset’s top-end variant and therefore, your experience could vary if you opt for the 3GB RAM unit of the device. Regardless, the smartphone was quick to open applications and didn’t show any major signs of struggle when I was multitasking too. I will admit, resource-hungry applications like Snapchat did reload from time to time but on the whole, the handset met my expectations. 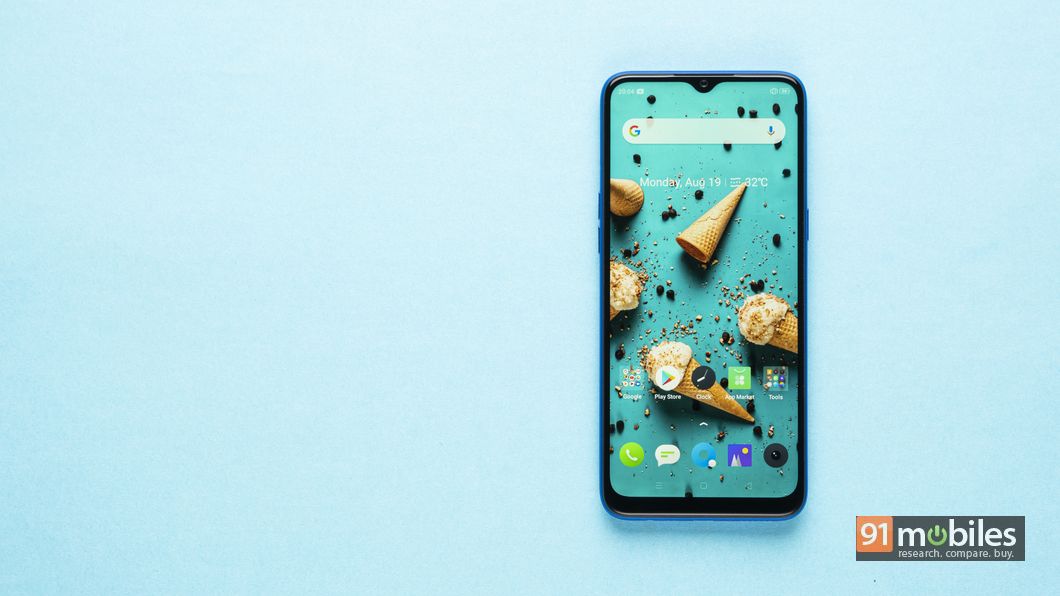 As for gaming, the device comfortably breezes through casual games like Golf Battle and Headball 2. You can even run intensive titles like PUBG on the phone, albeit at lower graphics settings. In fact, I managed to knock down a couple of chicken dinners in the game with the settings set to balanced and was quite pleased with the overall gameplay too. 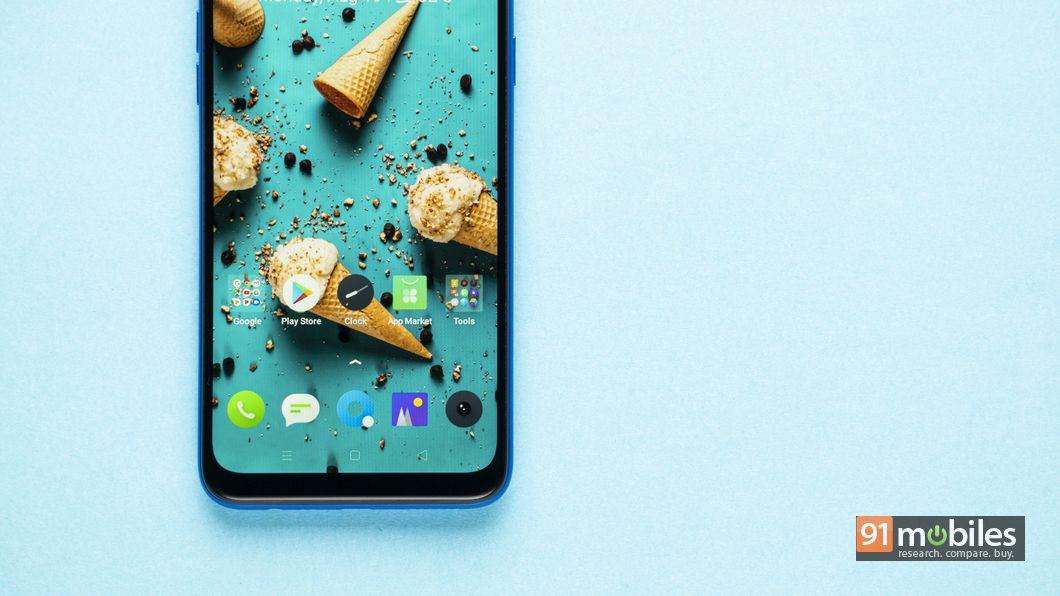 In terms of software, the Realme 5 boots Color OS V6.0 on top of Android Pie. I’ve already talked about Realme’s custom skin in length when I reviewed the company’s 3i, so head over to the link to know more about the Realme 5’s software.

As for the battery, the handset is fuelled by a massive 5,000mAh cell which will easily last you two days off a single charge. In fact, the handset lasted a whopping 33 hours in our battery drain test, which is the longest any phone has played a single video on loop.

The Realme 5 starts at Rs 9,999 and for the price, offers an unbeatable package. From its power-packed performance, to its good-looking design and long-lasting battery life, the smartphone checks all the right boxes. In terms of the competition, the handset faces a stiff battle from the Redmi Note 7S, which offers a higher resolution display for the same price.

However, Realme’s offering more than makes up for its lower-res display by scoring higher in other areas. Suffice it to say, the Realme 5 is a home run from the brand, and it’ll find plenty of takers.