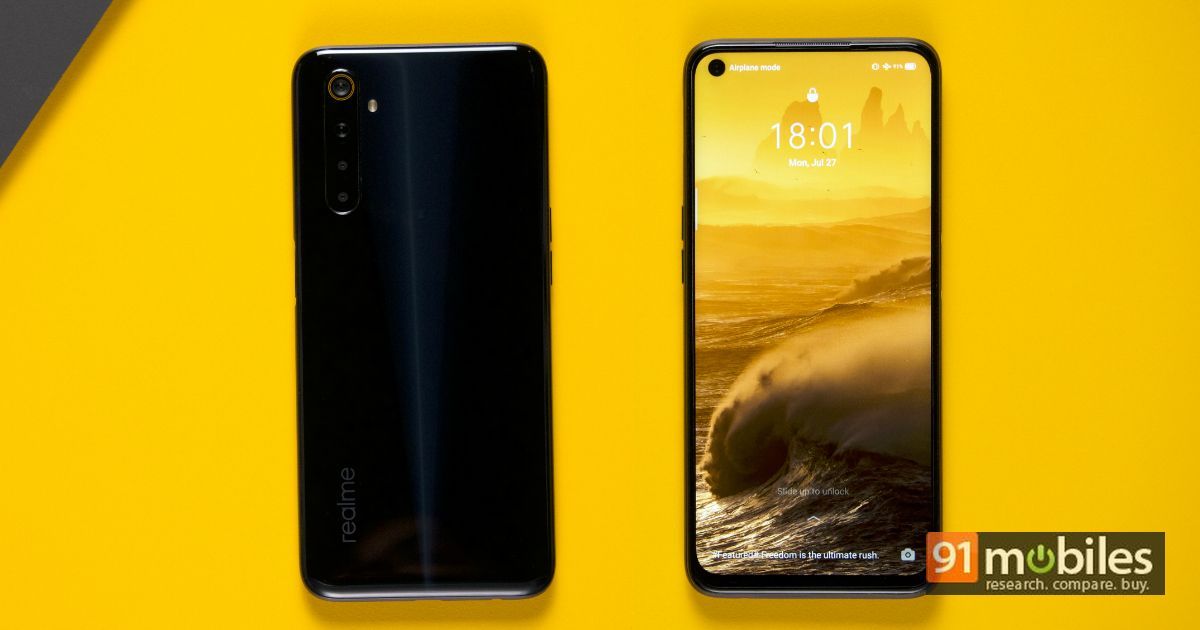 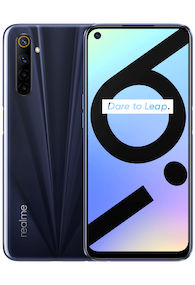 Realme 6i is the third smartphone to launch in the series in India. Earlier this year, the company launched the Realme 6 (review) and Realme 6 Pro (review), which are some of the best phones you can find between the Rs 10,000 to Rs 20,000 segment. The Realme 6i can be seen as a variant of the Realme 6, but with slightly downgraded specifications so that it can be made available at an even more affordable starting price of Rs 12,999.

For its price, the Realme 6i touts specifications like the MediaTek Helio G90T gaming-centric chipset, a 48MP quad camera setup, 30W fast charging support, and a 90Hz display. The specs sheet speaks for itself, but does it translate into one of the best phones under Rs 15,000? Read on to find out.

The Realme 6i gets the best features of the Realme 6 and makes sacrifices in places that can be overlooked, which in turn makes this yet another attractive option from the brand under Rs 15,000. In fact, the Realme 6i looks better than what some rivals offer at a similar price point. 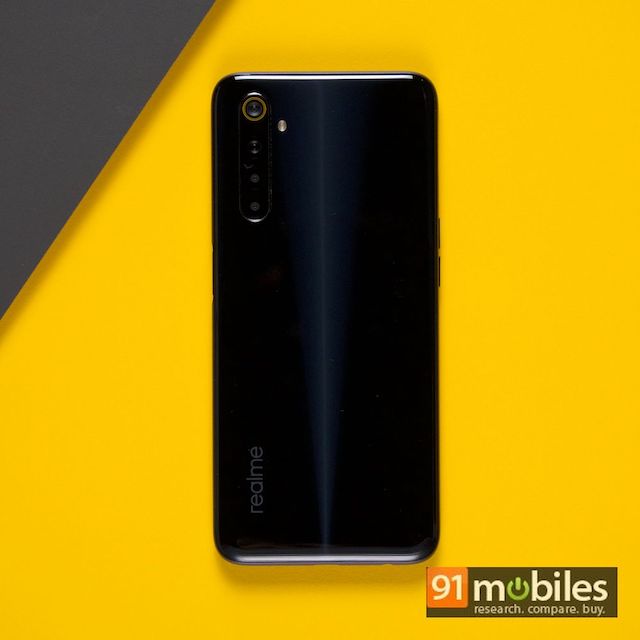 The design of the Realme 6i is one that we have seen time and again on Realme phones. It doesn’t offer much in terms of uniqueness, but it is still a good-looking phone, especially in the Eclipse Black colour option that we received for review. It is a pure black shade on the rear panel that gives the phone an elegant and appealing look. The rear panel is plastic and will collect scratches and scruffs if you’re not using a protective case.

The Realme 6i sports a side fingerprint sensor, which is placed ideally for your thumb to rest on. We feel the sensor could be better defined with a deeper depression, but that shouldn’t be an issue once your muscle memory gets used to it. There’s a 3.5mm headphone jack, a Type-C port and a single bottom-firing speaker grille at the bottom. The handset also comes with a triple card slot that can support dual nano-SIM cards and a microSD card. 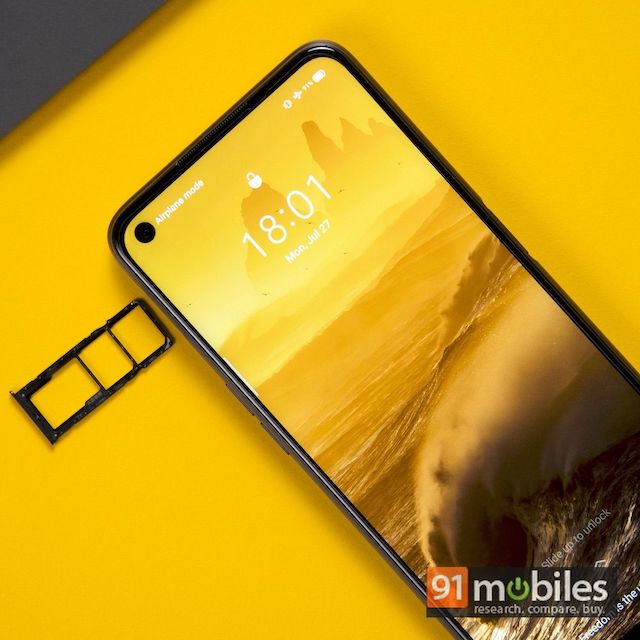 We found that the Realme 6i is a fairly lightweight phone that’s easy to use in one hand. The phone stands out in black, but it does miss out on that premium glass finish. We also feel that the buttons on the sides lack that tactile feel when pressing it.

On the front, the Realme 6i sports a 6.5-inch FHD+ (1,800 x 2,400) LCD display with a 90Hz refresh rate, which is good to see on a phone that starts at Rs 12,999. It may not be long before sub-Rs 10,000 phones start adopting high refresh rate displays. If you’re coming from a 60Hz display, you will find the scrolling experience to be smoother. You have the option to set the display at 60Hz as well, if you’re looking to get more battery life out of the phone. 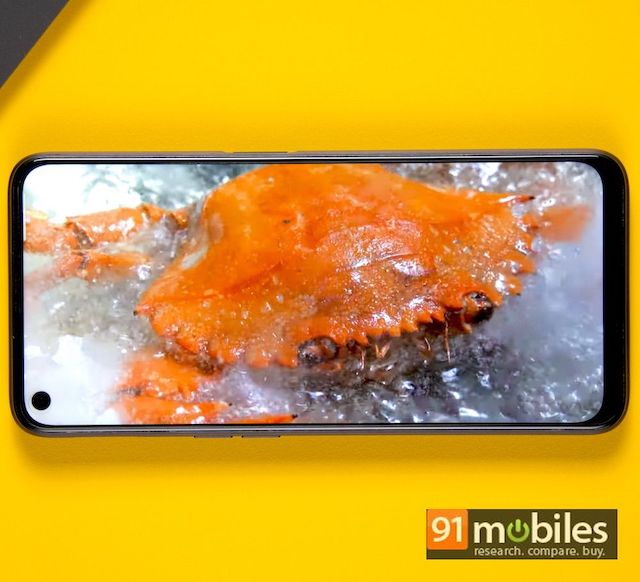 The display looks as good as you would expect to find in this segment. Colours look good with enough punch while the 1080p resolution delivers good sharpness while watching videos. The phone supports Widevine L1 certification, so you’ll be able to stream content on Netflix and Prime Video in full HD resolution. Brightness levels are adequate indoors, but could have been better outdoors under bright sunlight.

The Realme 6i comes with a quad camera system that’s as powerful as the setup on the Realme 6. The main camera is a 48MP f/1.8 sensor as opposed to the 64MP primary camera on the Realme 6. Other cameras are more or less similar on the two phones. There’s an 8MP wide-angle lens (119-degree), a 2MP B&W portrait lens, and a 2MP macro lens (4cm). Up front, the Realme 6i gets a 16MP selfie camera, integrated into the punch hole on the corner. Camera features include Super Nightscape, Ultra 48MP mode, Chroma Boost, 4K video at 30fps, and selfie portrait mode, among other things. 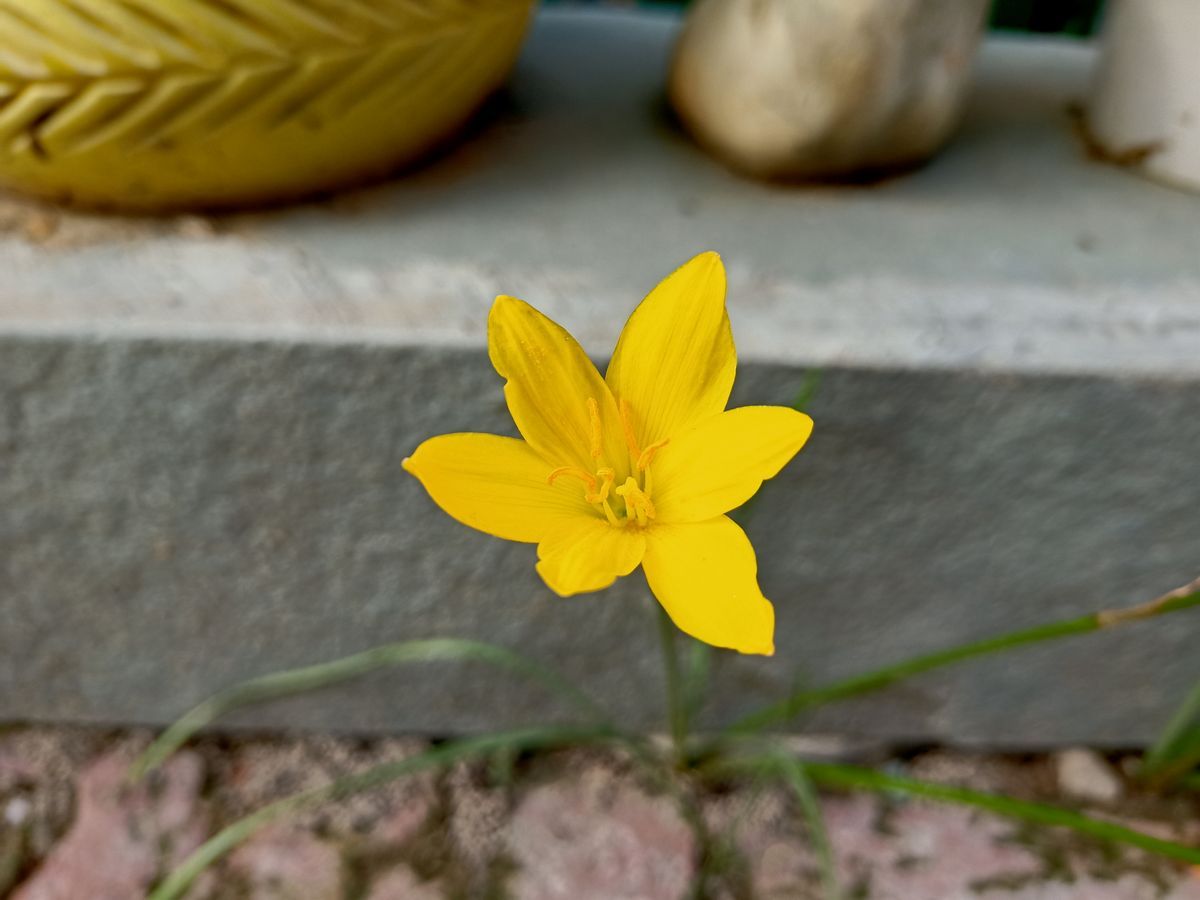 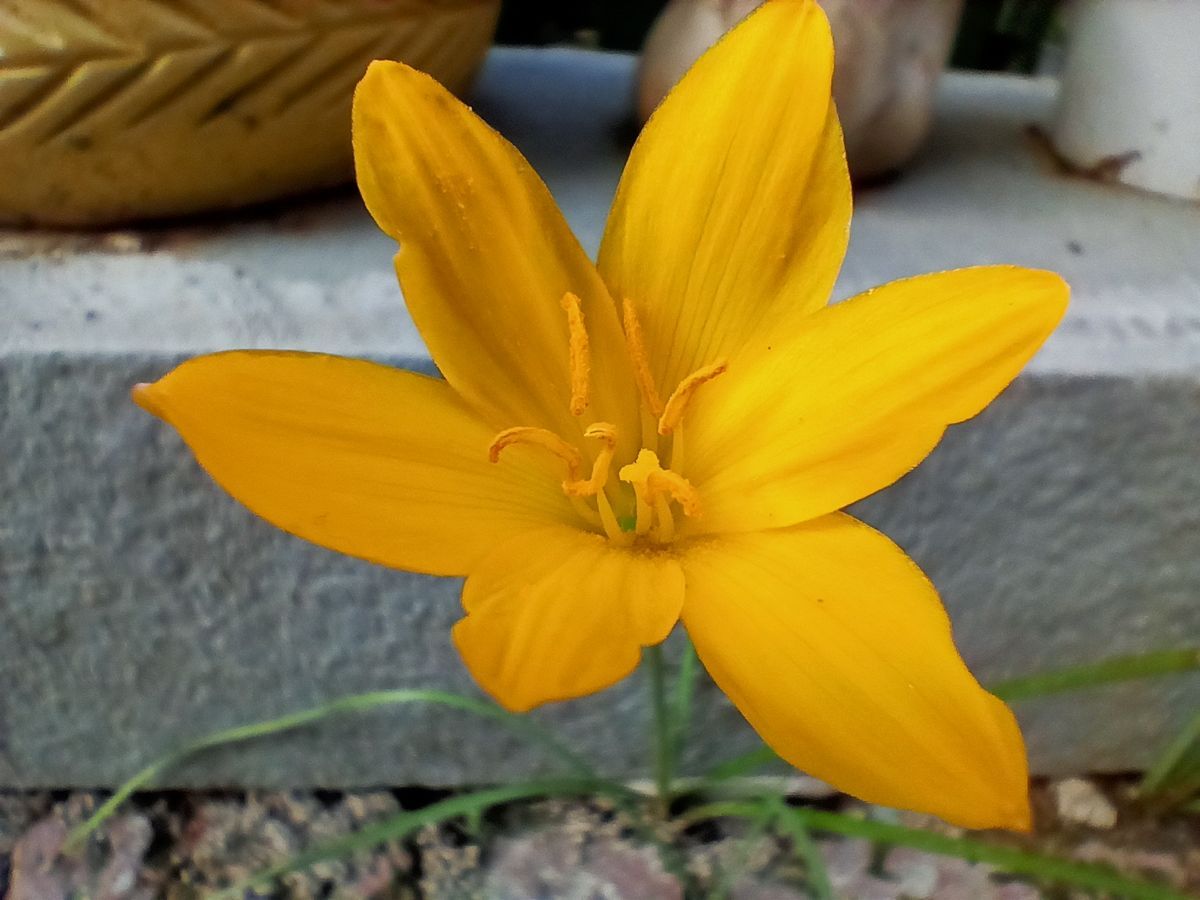 Talking about the camera performance, the Realme 6i offers decent photos in most conditions for its price point. We were pleased with the daylight shots, which captured good amount of detail and generally accurate colour reproduction with Chroma Boost disabled. If the mode is enabled, colours get enhanced and saturated, which can sometimes lead to a pleasing outcome and sometimes a bit too jarring for your taste. Dynamic range is satisfactory and contrast is passable. You can get some pleasing close up shots with an attractive background blur with just the main camera, which we often preferred over the 2MP macro lens. The macro lens changes the colour tone and doesn’t offer the best details. 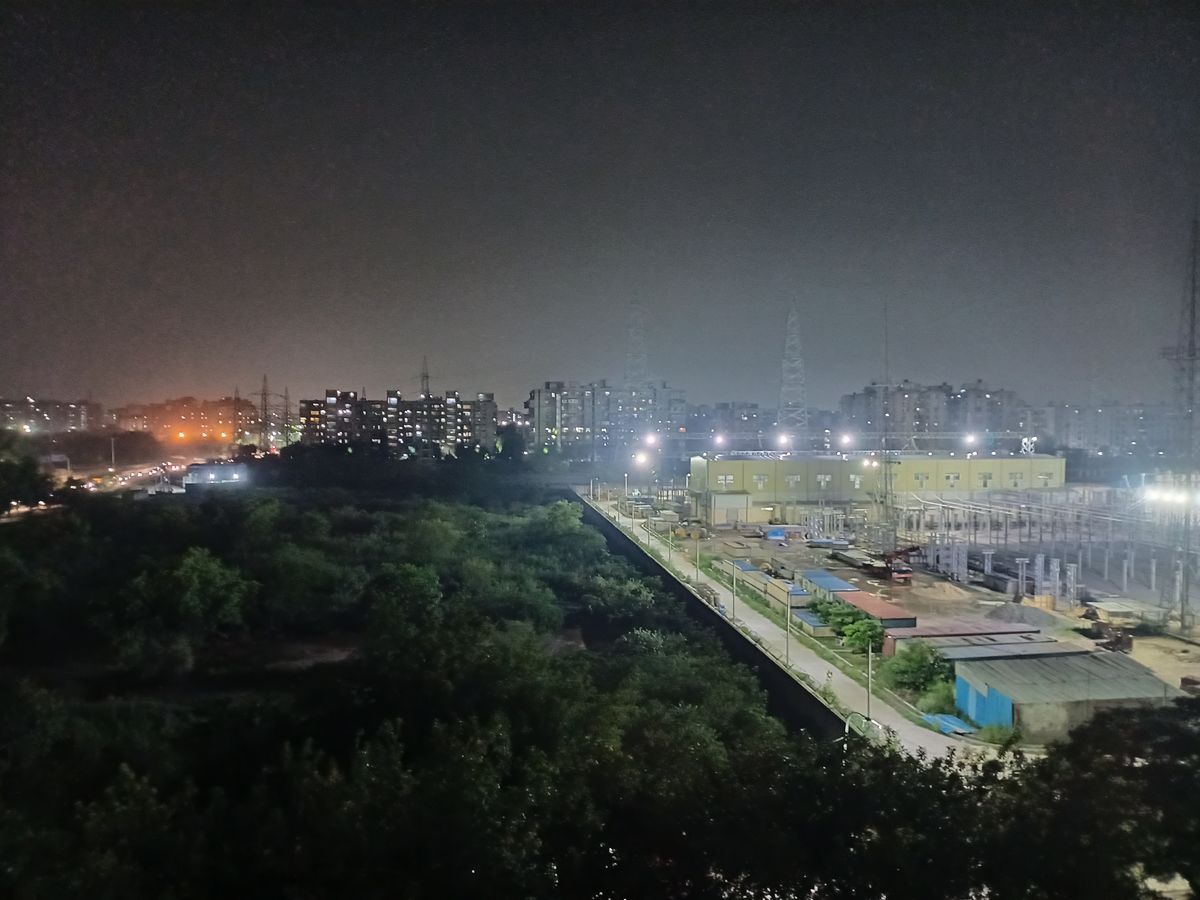 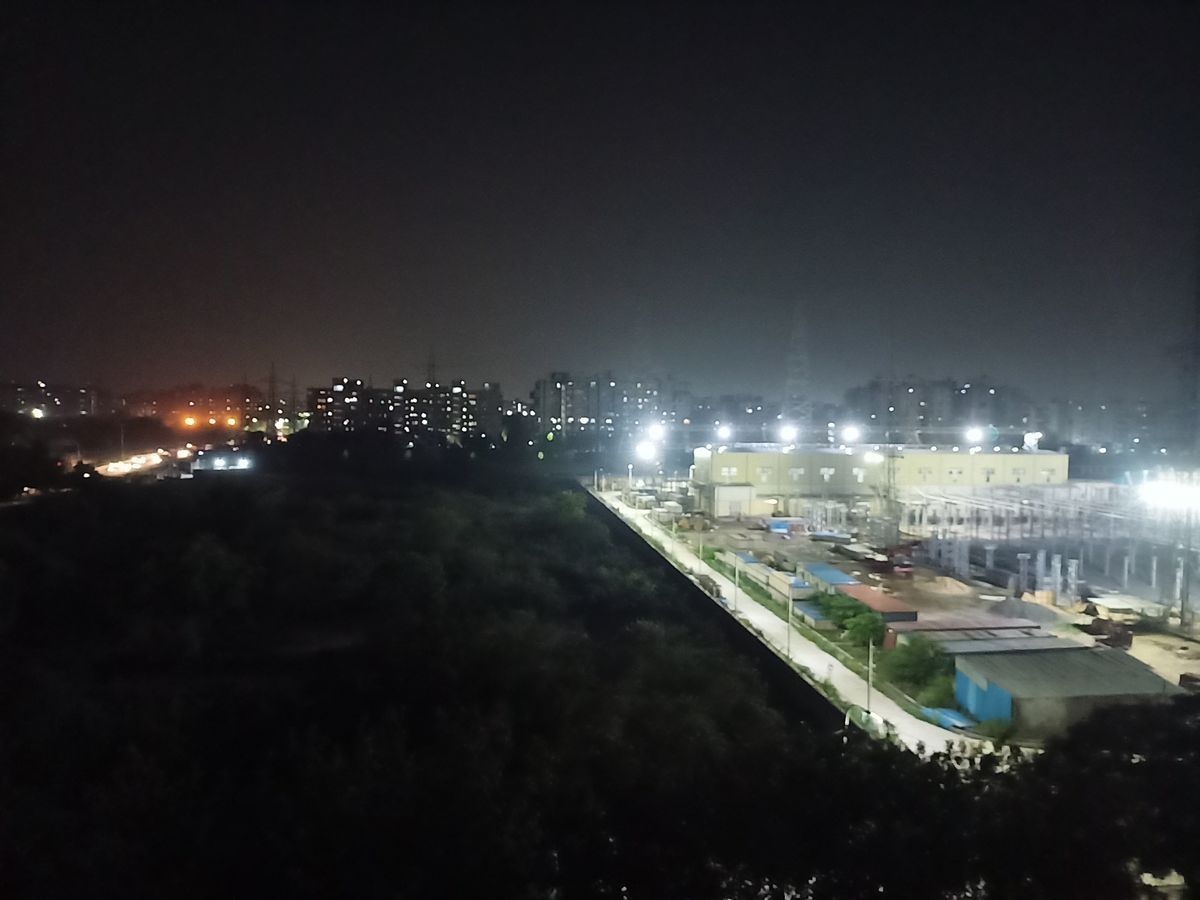 The 16MP selfie camera will get you acceptable selfies in daylight with mostly accurate skin tones and colours. However, the camera does tend to over-sharpen selfies a bit leading to softer images at times. The selfie portrait mode is also decent as long as the blur level is set anywhere between 40 to 60 percent.

We had no complains with the performance of the Realme 6i in day-to-day usage and for gaming as it uses the impressive MediaTek Helio G90T SoC. It’s the same processor powering the Realme 6 as well, and we’re pleased that Realme decided not to downgrade the chipset. The MediaTek Helio G90T is one of the better gaming processors for affordable and mid-tier phones, delivering a smooth gameplay experience in graphically challenging games like PUBG and Call of Duty Mobile. This is paired with up to 6GB of RAM on the Realme 6i, which means multitasking should also be easy and stutter-free. 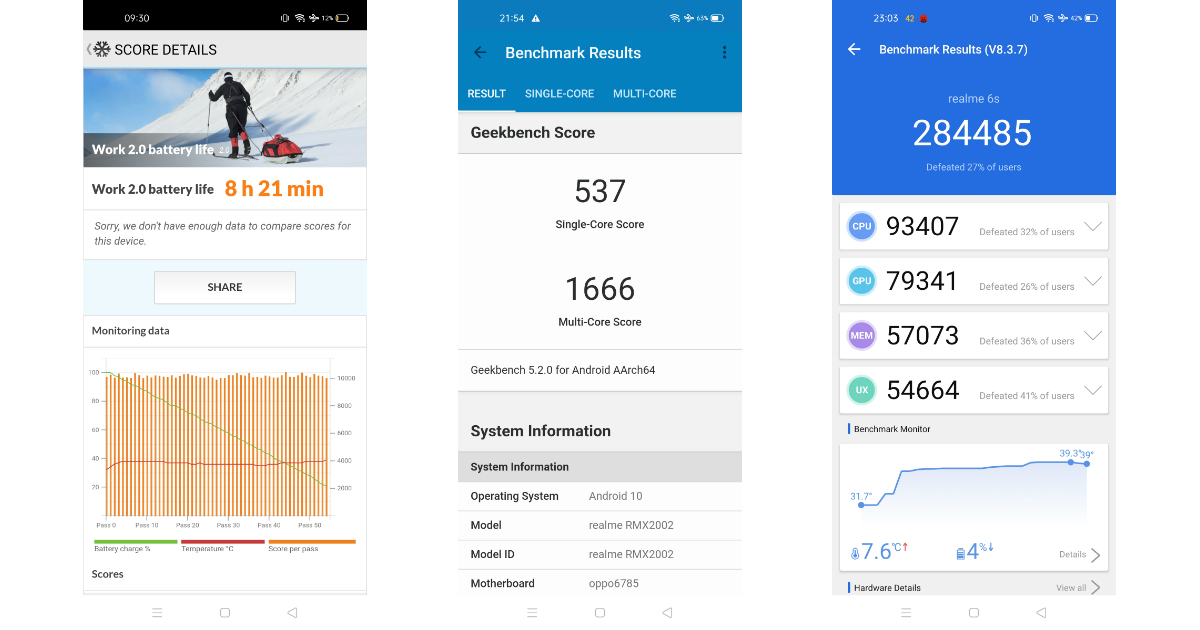 Everyday usage, which involved messaging on WhatsApp, social media browsing and some web browsing, was a breeze with the 90Hz refresh rate making the scrolling experience quite smooth, although we could still see some minor stutters along the way. The higher refresh rate does make the phone feel faster than it possibly is which is a good thing. Switching between apps was mostly smooth, but heavy apps don’t stay open in the background for long. Luckily, you have to option to lock apps so you can quickly pick up from where you left off. 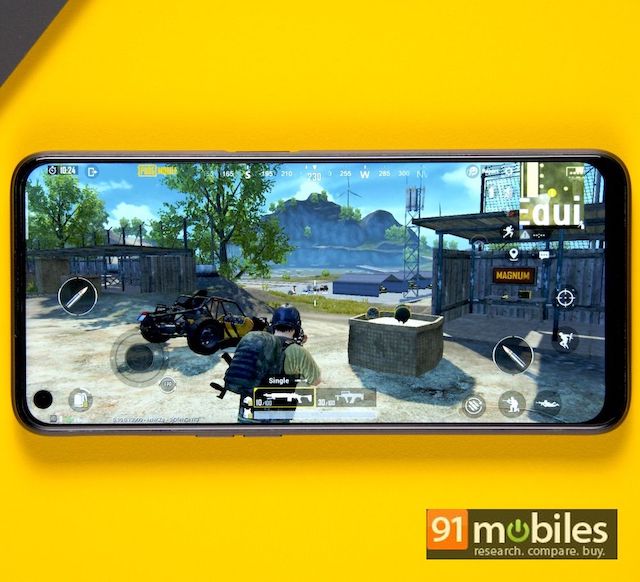 Coming to the gaming performance, the Realme 6i is capable of running PUBG in HD + High graphics by default, which is about the best you can expect from a phone in this segment. The gameplay experience was pretty good as we could see enough details on bricked houses and on tires of vehicles. We did notice minor drops in frame rate while moving in a car, but that didn’t bother us much. After a 30-minute session, the phone got slight warm and battery dropped by about 7 percent. 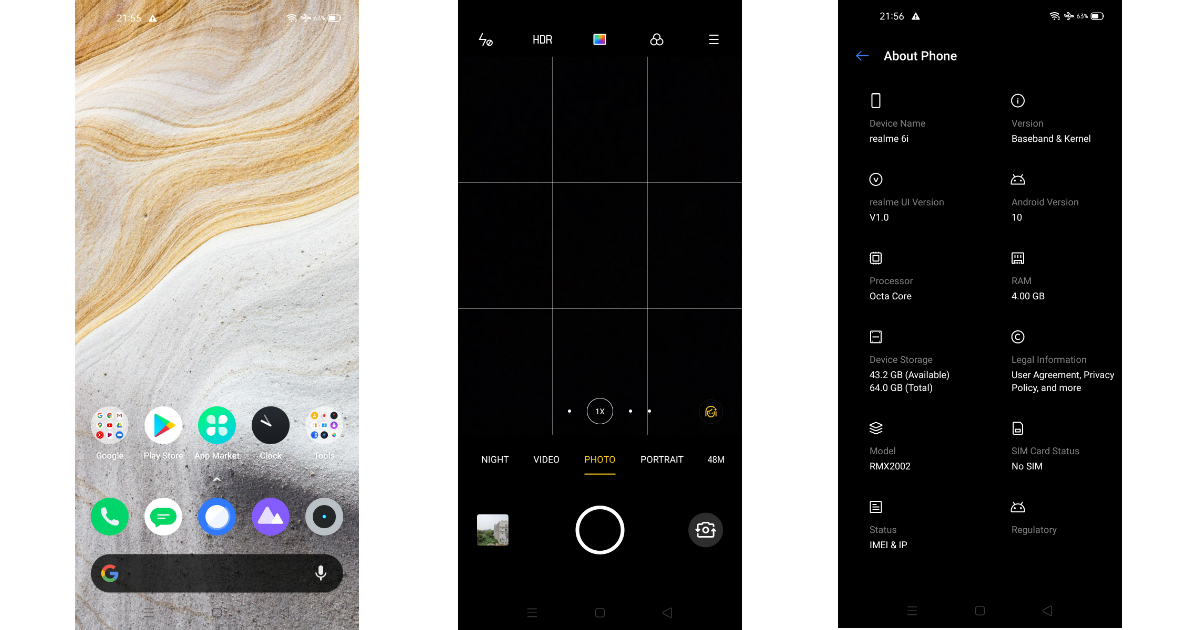 The Realme 6i runs Android 10 with Realme UI on top. Realme UI cuts down on a lot of bloatware, but you do get some preloaded apps like the brand’s own Realme Link and Realme PaySa, OPPO’s own SoLoop video editing app, along with third-party apps like Google Pay, Facebook and so on. The software is pretty clean otherwise and doesn’t push out a lot of spammy notifications. However, you will see ads inside some apps, such as while downloading apps from the Play Store. Realme UI comes with system-wide dark mode, lock screen magazine, Digital Wellbeing, and other useful features as well.

As for general user performance, the Realme 6i didn’t give us much to complain about. The side fingerprint sensor is quick to unlock the phone and we didn’t have to rely on face unlock much. The bottom-firing speaker is loud enough indoors and sounds decent for its price. Calls over the earpiece sounded clear enough and we didn’t encounter any unusual call drops during the review period.

The Realme 6i houses a 4,300mAh battery much like the Realme 6. It’s an average-sized battery, which will get you close to a full day on a single charge if you’re not using it intensively. We found ourselves having to charge the phone by the end of the day even on average usage. With 90Hz refresh rate enabled constantly, the battery does drain faster. in the PCMark battery test, the phone lasted 7 hours and 46 minutes on 90Hz and 8 hours and 21 minutes on 60Hz. We have seen phones perform much better in this segment. 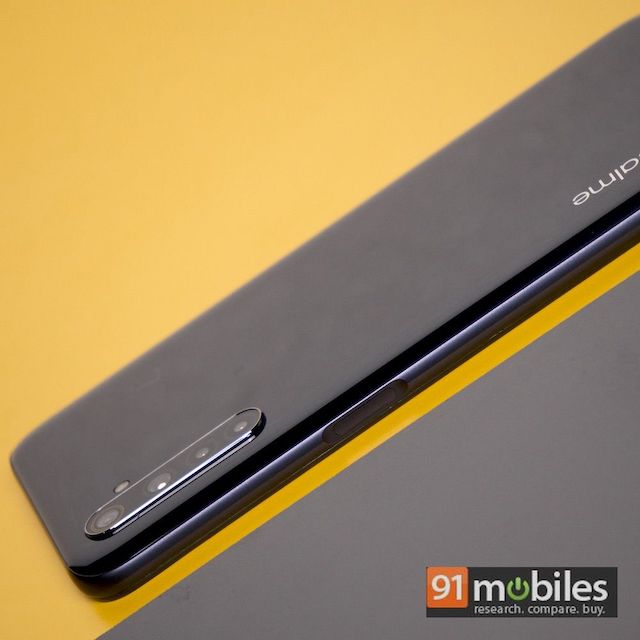 But where the Realme 6i loses out on battery life, it makes up for in fast charging. The phone supports 30W fast charging, which is among the fastest you will find at this price point. You should note, however, that the company bundles the phones with a 20W charger, which is kind of a bummer, but understandable as a cost-cutting measure. You can purchase a 30W VOOC flash charger from Realme’s online store for Rs 1,399. That being said, even with the 20W charger, the phone can be fully charged in about an hour and 20 minutes, which is pretty fast.

The Realme 6i makes a lot of sense as a sub-Rs 15,000 smartphone, more so than the Realme Narzo 10. The Realme 6i takes some of the best features of the Realme 6 and brings them to a more affordable price point, so there’s not much to complain about. Starting at Rs 12,999, the Realme 6i offers a crisp and smooth 90Hz FHD+ display, fast charging support and a powerful MediaTek Helio G90T chipset.

There are more than a few good options under the Rs 15,000 price segment and we feel the Realme 6i is one of them. If you’re looking at the Narzo 10 (review) and Redmi Note 9 (review) at Rs 11,999, we feel spending Rs 1,000 more and buying the Realme 6i will be worth it. The Realme 6i also looks good against the Rs 13,999 Redmi Note 9 Pro as the former offers a smoother 90Hz display and faster charging support. The Realme 6i is not the best phone in this segment as it does come with a mediocre battery life and average camera for low-light and macros, but the pros definitely outweigh the cons here.