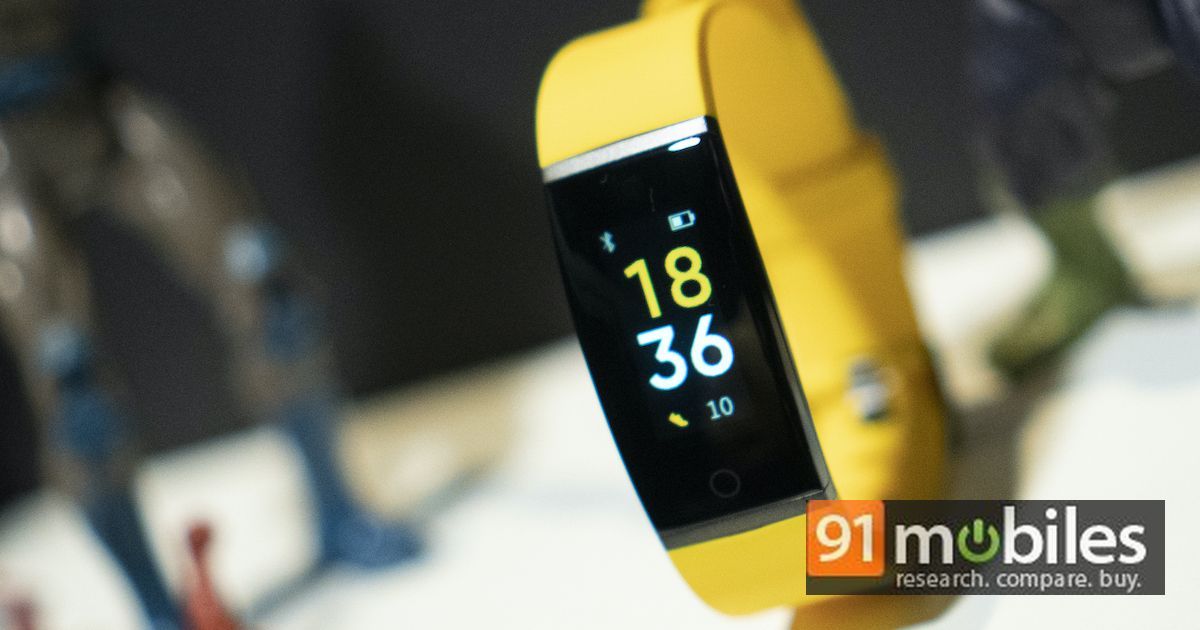 Realme has already proved it can make compelling smartphones, so the brand is pretty confident now that it can bring the same magic to other product categories as well. Realme wants to be known as a tech lifestyle brand, which is why the company is planning to launch several new wearables and IoT products in 2020 such as a smartwatch, smart TV and smart speaker. To start things off this year, Realme has launched its first-ever fitness tracker, called the Realme Band.

The Realme Band is looks and works as simply as its name suggests. It has been launched in India with a price tag of Rs 1,499, making it one of the more affordable fitness trackers in the market right now. The most obvious rivals to the Realme Band is the Mi Band 4 (Review), Honor Band 5 (Review) and Honor Band 5i, all of which are prices slightly higher in this segment. The Realme Band touts a coloured display, one-touch user interface, USB Direct charge, real-time heart rate monitor and sleep tracking, among other things. In our Realme Band review, we will talk about how these features work and whether they make the fitness tracker worth buying over its competitors. 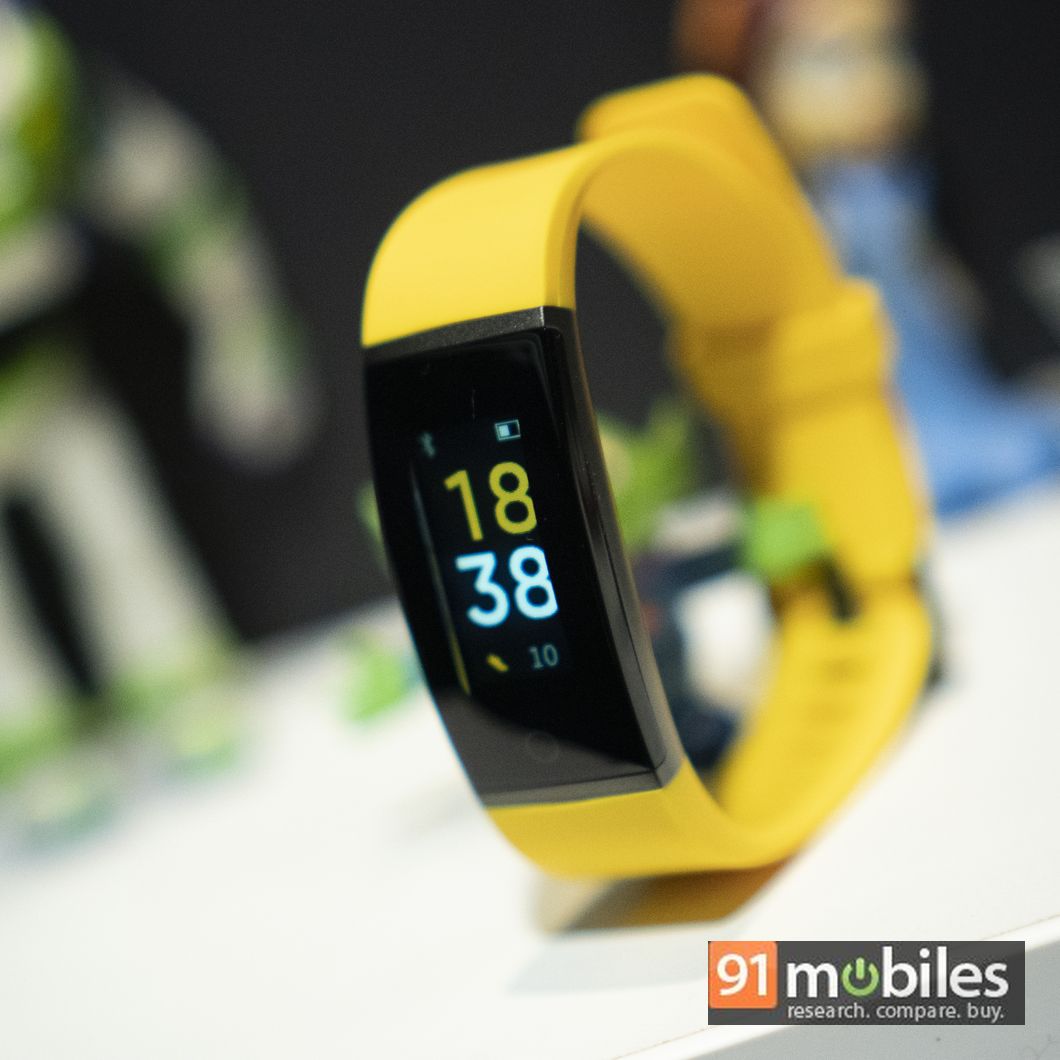 The Realme Band offers a very sleek, curved design language that looks attractive despite its minimalism. The body of the fitness tracker is curved, which rests naturally on the wrist. The plastic protecting the display seamlessly curves with the straps, so there’s no hump or protrusion at all. This makes the Realme Band look sleeker and slimmer compared to rival fitness trackers.

While the plastic body is in a space grey colour, the straps come in a choice of black, olive green and yellow options. The variant we received for review was in black, which is a more discrete choice to go for if you’re not looking to grab any attention. The olive green colour looks sober and unique, while yellow is loud and will definitely attract some eyes. The straps come with plenty of punctures so you can clasp the band real tight if you need to.

The Realme Band weighs around 20 grams, which is pretty lightweight. You can wear the band all day long and while sleeping at night and not let it bother you one bit. This is good because you can actually use the band for sleep tracking, which we will talk about in a bit. 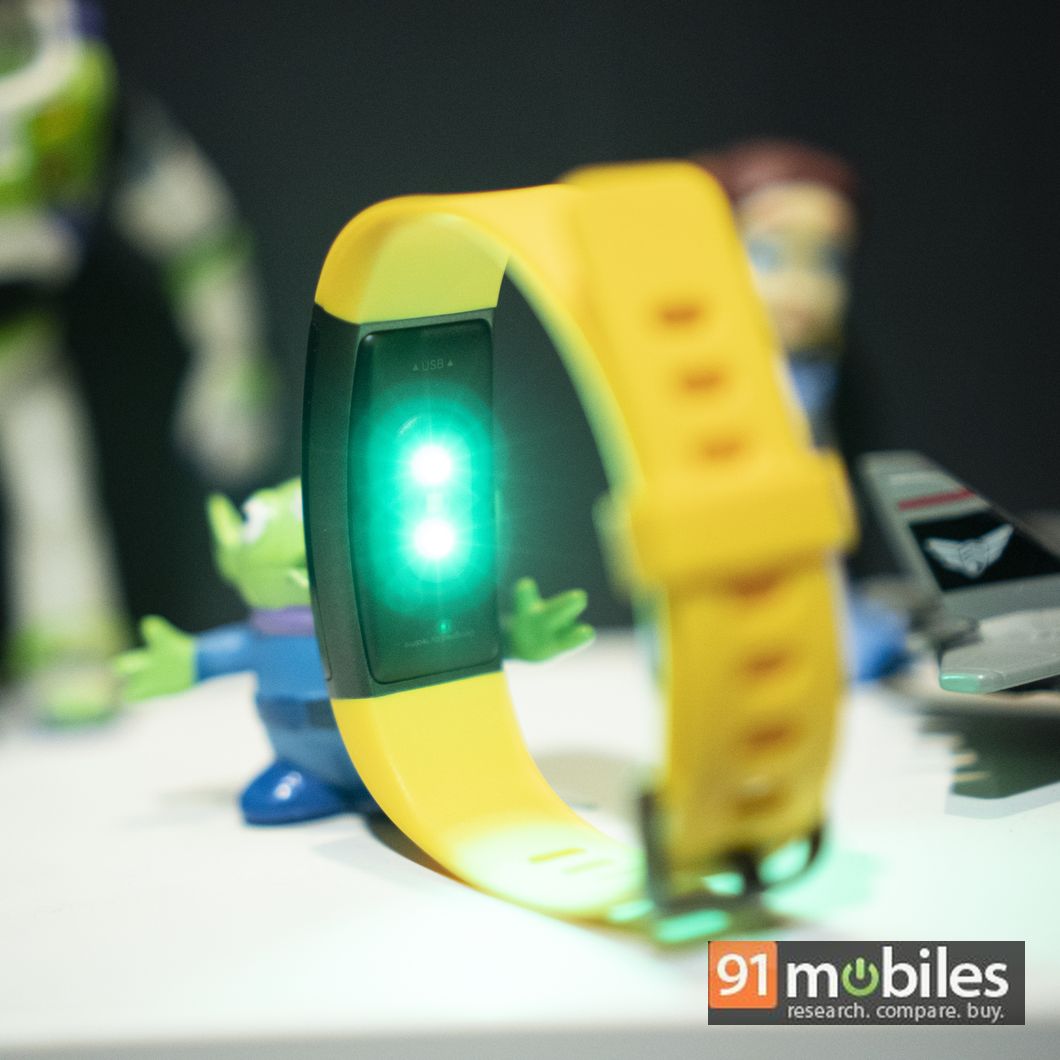 The TPU straps give a plastic-like feel and are not as soft as what you’d get with other bands that come with silicone straps. Still, we didn’t find the material uncomfortable on the wrist, and it should be pretty durable as well. The toughness of the TPU straps is also useful since you will have to remove one of them pretty often. The Realme Band comes with a USB connector that hides under the strap. You have to open the top strap by snapping it open to expose the USB port.

With a built-in USB port, you can directly plug the Realme Band to any Type-A port, like say your laptop or a charging adapter. This eliminates the hassle of carrying around a separate charger. This is a pretty convenient design choice, which is also found on the Honor Band 5i.

We say this because the Realme Band’s display is average. The biggest issue we had with the display was the brightness, which is quite poor. While you won’t find any issues reading the display indoors, the screen is almost completely useless when outdoors under bright sunlight, which Delhi has plenty of during summers. This is not a band that can be used outdoors, as you will struggle to see the display unless you cup your hand on the screen and look closely.

Even indoors, the screen’s low brightness makes the coloured display look pretty dull. Colours lack that vibrancy and richness that you would find on an AMOLED display on say the Honor Band 5 or Realme Band 4.

The Realme Band’s display is not touch enabled, so that takes a while to get used to. There’s a single capacitive button below the display that can be tapped to browse through the limited UI. You can touch the button to move from the watch face to the steps counter to heart rate monitoring to workouts to the alarm, and finally some regulatory information and then back to the watch face. 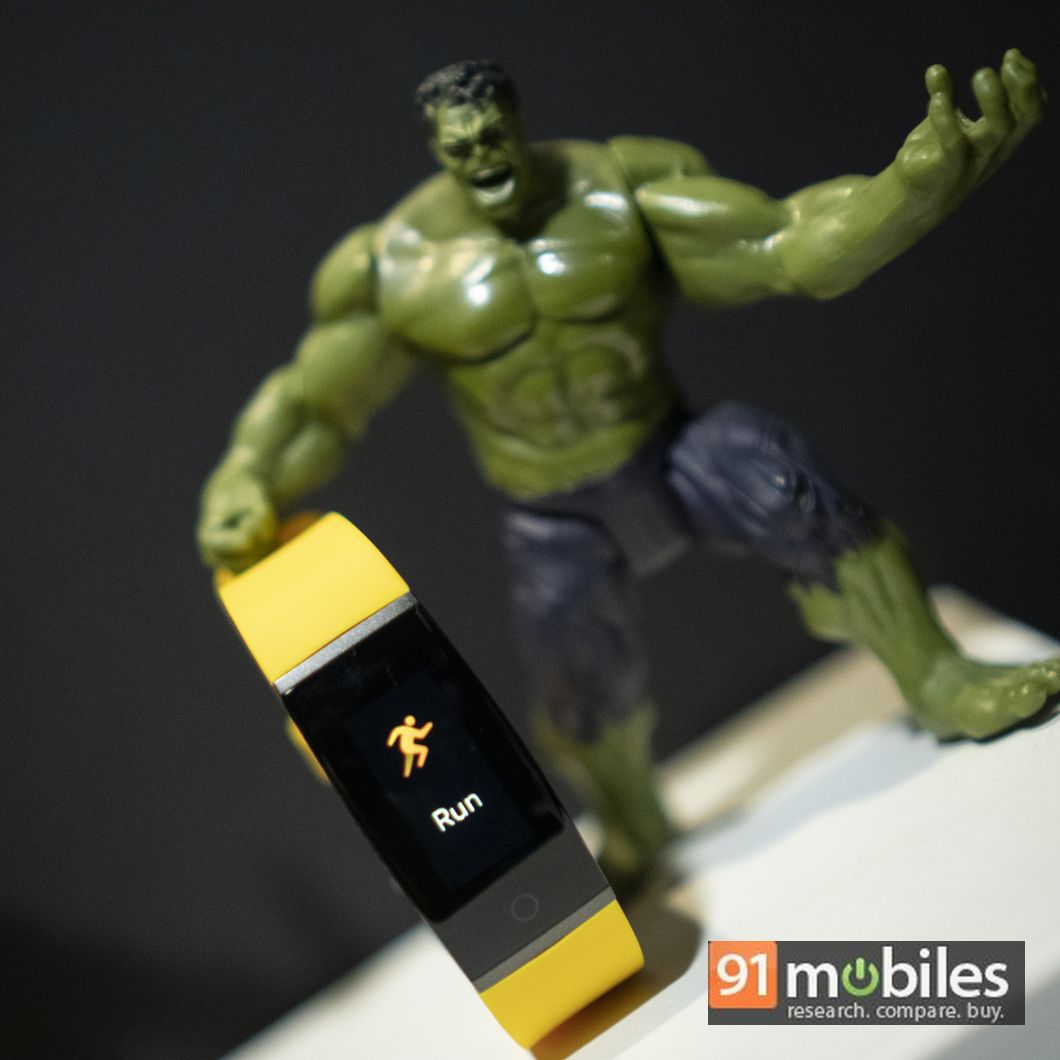 Now, to enter into any one of these modes, you will have to long press the capacitive button till you feel a vibration. By default, you will have three workout modes on the fitness band – Run, Cricket and Yoga. You can only keep three workouts at a time on the band, and you will need to download the Realme Link app to remove one or more of them and add another workout. In addition to the three workouts already mentioned, the Realme Band supports six more sports modes that include Walk, Bike, Hiking, Fitness, Climbing and Spinning. 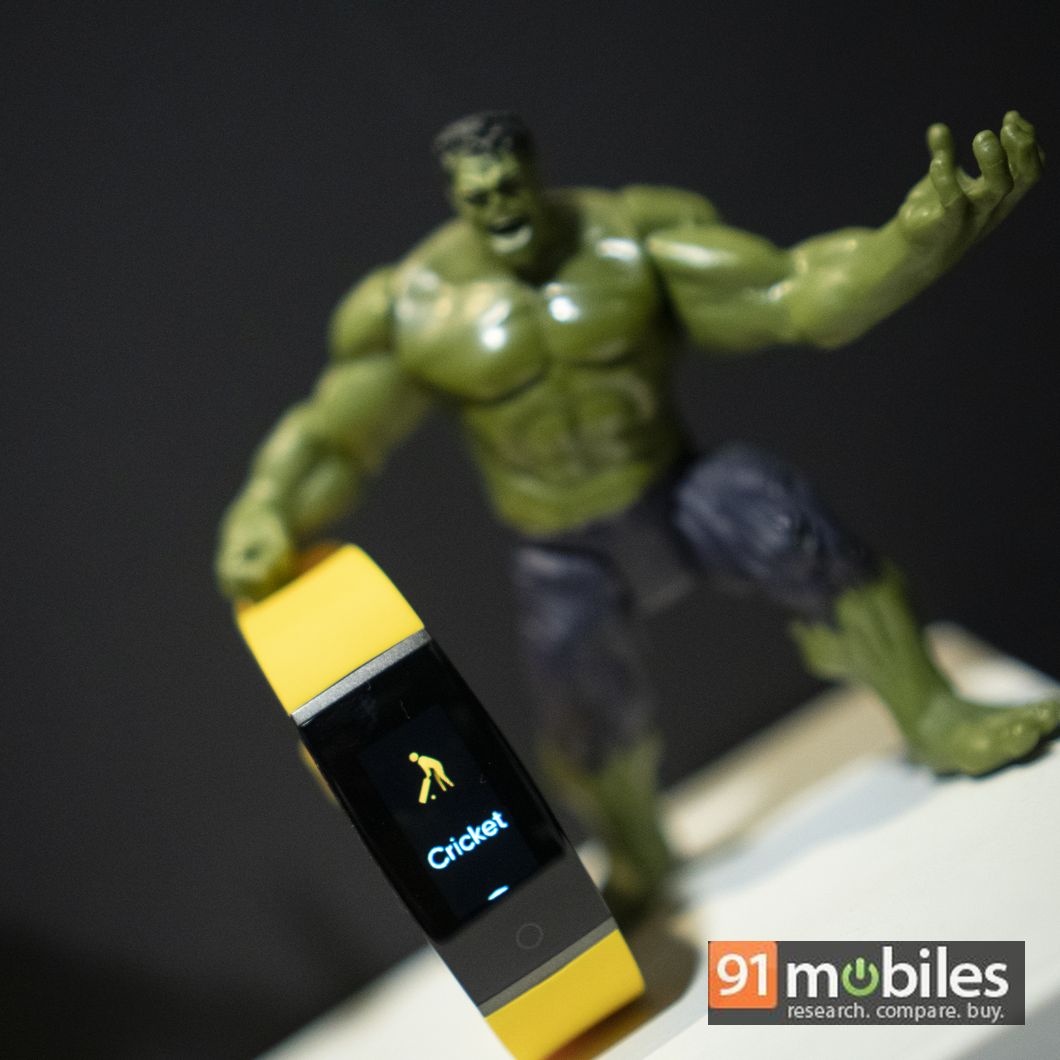 Realme is particularly highlighting the Cricket mode, which has been designed specifically for India. However, the mode itself is extremely limited in that it only gives you your heart rate data and calories burnt. There is no special “Cricket” feature here like run count or swing detection. Similarly, Yoga mode will also show you your heart rate and calories burnt. Meanwhile, the Run activity will show you more info like steps, distance, pace, Kcal and heart rate tracking. The fitness band can also auto detect when you walk or run, both of which need to be enabled via the Realme Link app.

As you can tell, the Realme Band depends a lot on the Realme Link app, so let’s talk about the app and what you can use it for.

Realme Link is a companion app for Realme’s wearable products like the Realme Buds Air and Realme Band. It is currently only available for Android phones, and an iOS version will be released sometime in the future. The Realme Link app offers a clean and minimalistic UI, which is great to see. It’s not cluttered with too many features and options. You need to open the app and create a Realme account before you can proceed.

Once your account has been created, you can proceed to pair your Realme Band with the phone through the app. Once paired, the fitness tracker will sync the time and activity data with the phone. It is on the app that you can get a detailed overview of your daily steps, sleep and heart rate data.

You can also see the battery level of the Realme Band via the app. The Settings menu on the app is where you can change the watch face on the Realme Band. You get five watch faces to choose from. Most of the faces boldly emphasise the time and include step count, but only the default face shows the battery and Bluetooth pairing logo. The faces look colourful indoors, but are rendered dull and unappealing outdoors due to the tracker’s poor screen brightness.

The settings menu also lets you enable options like incoming call, alarm, notifications, drink reminder, continuous/ manual heart rate monitoring, DND mode, raise to wake up, auto sport recognition, and so on. You can also adjust the brightness levels, but we don’t believe anyone will choose to lower the brightness from its default max setting.

The notifications option lets you choose which apps can send you notifications on the band. However, apps that are supported here are limited. Popular apps like Gmail and Instagram are not supported, so you will have to see your phone to read your mails or find out who liked your picture.

We found the Realme Band is mostly accurate when it comes to tracking steps and heart rate. The band does well to not register ghost steps, which is an issue we found on the Honor Band 5i. The touch response of the capacitive button is good, but the display takes longer than the Honor Band 5i to wake when raising your wrist to your face. There’s not much that can go wrong when it comes to the performance of the Realme Band since it offers a bare-bones UI. As we mentioned earlier, the one-touch capacitive button takes a bit to get used to as one is used to touching the screen for scrolling. The long press option to start or stop a mode works well enough.

Realme Band comes with an IP68 rating for water resistance up to 50 meters, which means you can wear the tracker while taking a shower. Strangely enough, the Realme Band does not support swim tracking despite its IP68 rating. It is possible that the company will add a Swim mode later on. For now, if you’re looking for a fitness tracker with swimming tracking, you will have to spend a little extra and buy the Honor Band 5 or Mi Band 4.

You can receive notifications from apps like Facebook, WhatsApp and Twitter, but you won’t be able to reply to them or interact with them in any way. While we found the heart rate sensor to be mostly accurate, it does take longer than some other fitness bands to measure and display your heart rate on screen.

Realme Band promises to deliver up to 9 days of battery life provided you disable the continuous heart rate monitoring. With the feature enabled all the time, the battery life will likely reduce to roughly 6-7 days. We’ve used the Realme Band for just about a week now with continuous heart rate tracking enabled and the battery did not drain completely, which is a pretty good sign that the watch will take you through a week easily. 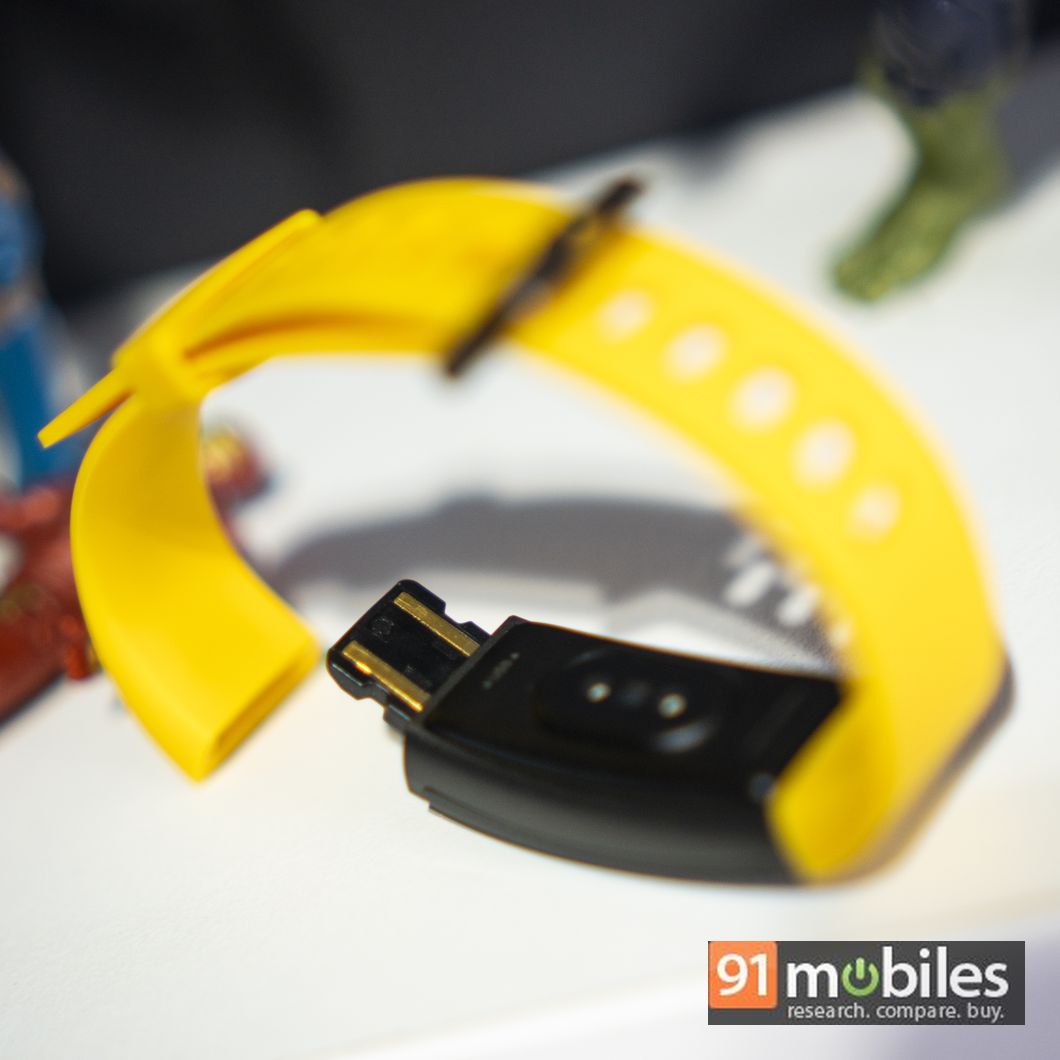 We plugged the Realme Band to the USB port on our MacBook Air. You can tell that the device is charging by seeing a red-colour charging indicator light up above the screen. The Realme Band took around 50 minutes to charge up from 30 percent to 100 percent.

Both the Realme Band and Honor Band 5i offer around a week-long battery life. Again, if you’re looking for a fitness tracker with a longer battery life, the Honor Band 5 and Mi Band 4 are the ones to go for as they claim to offer up to 20 days battery life.

The Realme Band is a no-frills fitness tracker that offers an extremely easy-to-use interface. It is for users who aren’t looking for a complicated or feature-loaded fitness tracker. The one-touch usage makes it easy to navigate a minimalistic UI. The tracker is lightweight and offers some neat features like, USB direct charging, sleep tracking and continuous heart rate monitoring.

That being said, Realme’s first fitness tracker is far from being perfect. The biggest problem with the Realme Bands is its poor screen brightness, which makes the tracker extremely hard to use outdoors in daylight. Some fitness modes, like the hyped Cricket mode, could have also offered more information for the user to get a better idea about their workout.

While the Realme Band is a capable fitness tracker and one the most affordable ones in its segment, we expected to see something more from a company that is all about pushing limits. By paying a little extra, you can opt for the Mi Band 4 or Honor Band 5 that offer brighter AMOLED displays, touchscreen functionalities and more comprehensive activity insights.