It’s common practice for smartphone brands to venture into new opportunities/avenues once they’ve tasted success selling phones in India. Take Realme for instance, which debuted in the country with competitively-priced Android handsets almost three years ago. Fast forward to today and the brand has its fingers in the audio, wearables, tablets, and smart IoT space as well. What’s more, Realme recently forayed into the laptop segment too with the launch of the Realme Book Slim series of notebooks. 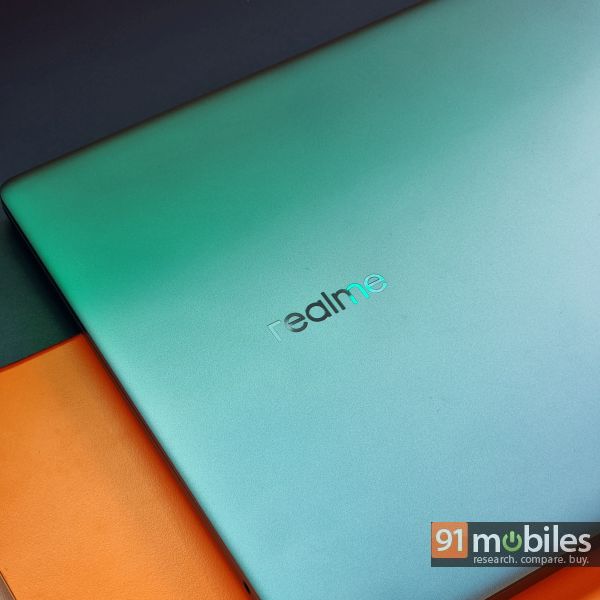 It goes without saying that the Realme Book Slim has a lot riding on its shoulders – after all, you’d want your first-ever laptop to make a good impression, amirite? So then, does the laptop persevere or succumb to pressure? Let’s find out in this review.

I won’t beat around the bush at all – Realme has struck the ball out of the ballpark with the Realme Book Slim’s design. Quite frankly, I find it hard to believe that this is the first laptop from the brand – the build quality is phenomenal and I’ve never laid my hands on a more premium notebook in the sub Rs 50K price bracket. 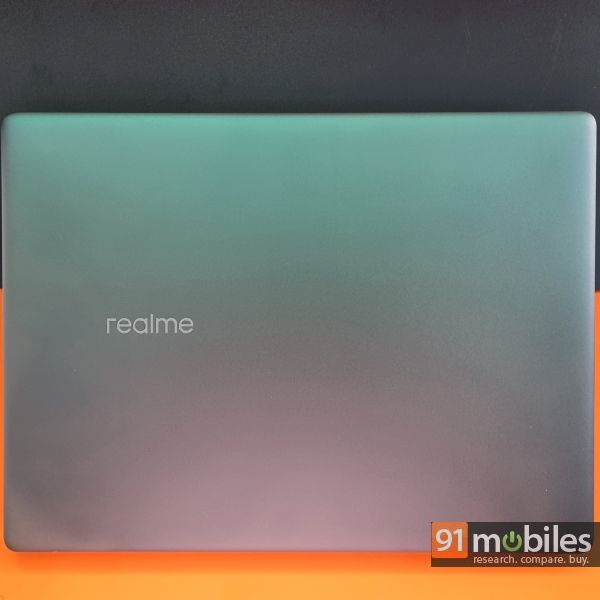 Okay, I’ll stop gushing over the laptop’s design now and talk a little bit more about what separates it from the herd of other affordable laptops in the market. Let’s start with the build of materials and here, Realme has employed aluminium alloy for the unit’s construction. Consequently, unlike most competing notebooks, the Realme Book Slim’s chassis feels superbly robust and luxurious to the touch. What’s more, the company has paid special attention to the spit and polish on offer and you won’t find any jagged or uneven edges anywhere on the laptop’s surface. So, be it the notebook’s chamfered edges, or its tapered wedge-shaped base, you’ll be hard-pressed to find any flaw in the unit’s construction. 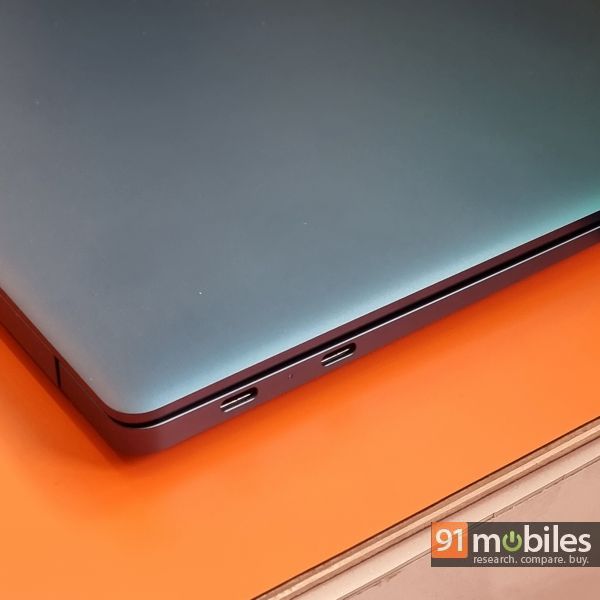 The laptop’s ergonomics leave nothing to be desired too and at 1.38 kilos, the Realme Book Slim makes for a fantastic machine for frequent commuters or office-goers. What’s more, the company has launched the laptop in two hues, dubbed Real Blue and Real Grey. I was sent the former for review and the unit’s bright blue shade comes across as a breath of fresh air in a segment that’s dominated by black and grey-coloured machines. Adding to the list of pros, the laptop’s hinge is quite sturdy too and it offers ample friction to keep the display anchored in place. In fact, I recently had to travel for work and the laptop’s screen barely wobbled when I was using the notebook in a cab. 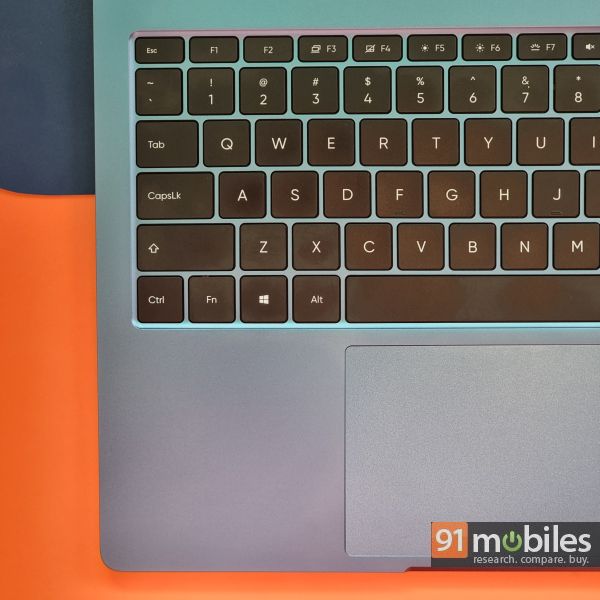 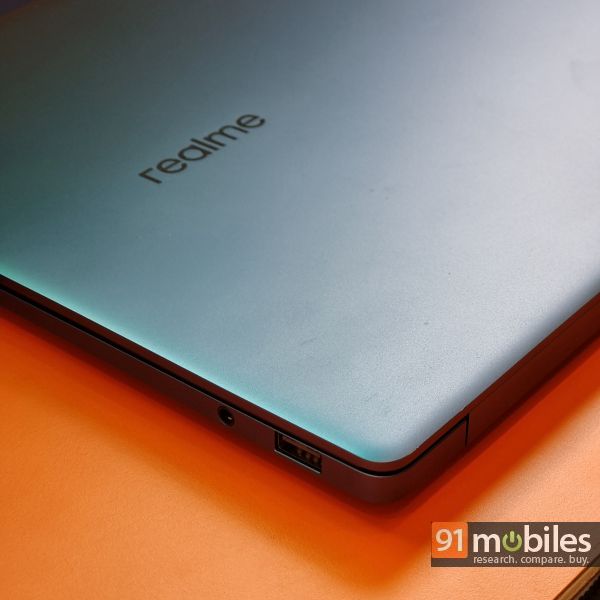 As for the I/O, the Realme Book Slim ships with three Type-C ports, a USB 3 Type-A connector, and a headphone jack. I should point out that the i5 variant of the machine offers support for ThunderBolt 4 as well. Notably, the Realme Book Slim also features a fingerprint sensor embedded within the power button, which worked flawlessly during my testing. On the flip side, the Realme Book Slim’s sleek chassis omits some notable connectors, including an ethernet port, an SD card reader, and even an HDMI slot. You will have to invest in a dongle should you buy the notebook.

As good as the laptop’s design is, the Realme Book Slim’s display is in a league of its own. Spec-wise, the laptop is backed by a 14-inch, 2,160 x 1,440p 2K IPS panel that canvases 90 percent of the laptop’s lid. The display gets adequately bright at 400 nits too and covers 100 percent of the sRGB colour gamut. 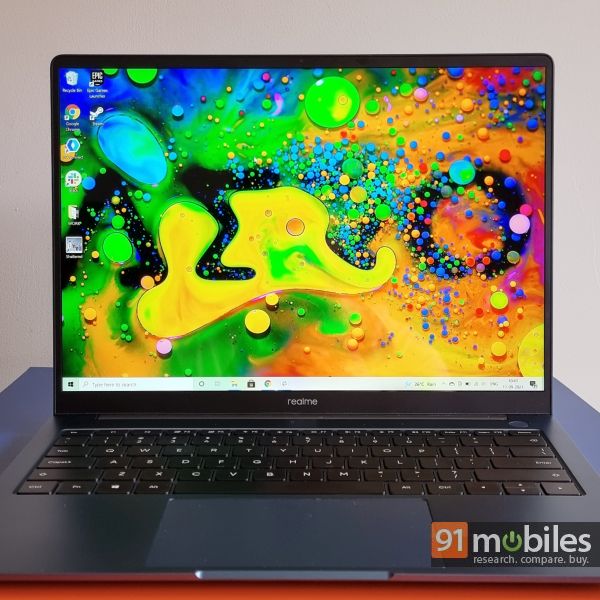 Now, if you’re remotely familiar with value-oriented notebooks, then you’ll know that manufacturers often cut corners in the display department. The recently-launched Redmi Notebook 15 Pro (review) is a good example of the same and the unit’s 15.6-inch TN panel was underwhelming, to say the least. Thankfully, Realme has managed to bring an excellent display to the mix and the Book Slim’s 2K screen is an absolute joy to use – the panel offers excellent viewing angles, peppy colours, and crisp visuals too. 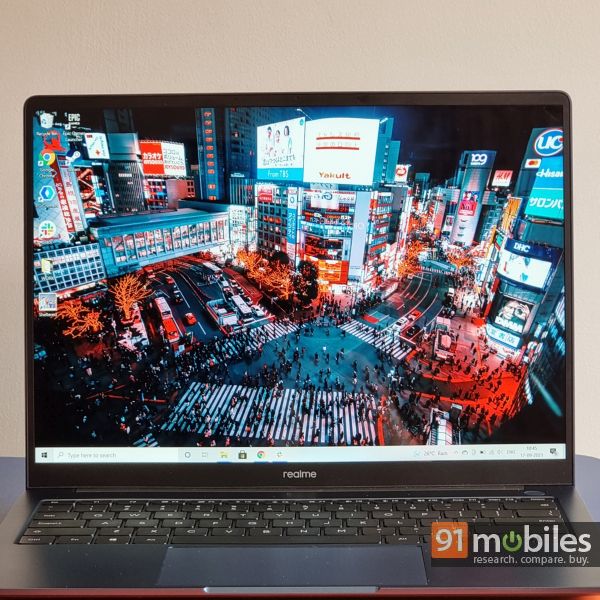 What’s more, the panel ships with a 3:2 aspect ratio, meaning you should be able to fit in more text as the display touts higher vertical screen real estate compared to a 16:9 or a 16:10 aspect ratio screen. In a nutshell, the display is a godsend for folks whose work revolves around content-dense websites, Google Docs, or Excel sheets. The only downside of using a 3:2 aspect ratio display is that you’ll have to deal with wide black bars that sandwich any video you’re watching on the screen. As for audio, the Realme Book Slim’s downward-firing speakers can get quite loud and should suffice for watching movies on the fly. Of course, you also have the option of using wired earphones with the laptop, as the machine ships with a 3.5mm headphone jack too.

The Realme Book Slim’s keyboard is top-notch too. I’ve been using the laptop to draft most of my reviews from the comfort of my bed and I haven’t missed my mechanical keyboard once. Now, the unit is not without its faults and I would’ve liked to see less wobble when I rest my finger on a key. However, the keyboard offers a spacious deck with an accommodating wrist rest and the keys offer satisfactory clickiness and travel (1.3mm) too. What’s more, unlike some VFM machines, the Realme Book Slim’s keyboard supports three levels of backlit LED, ensuring you can work comfortably even with all the lights in your room turned off. 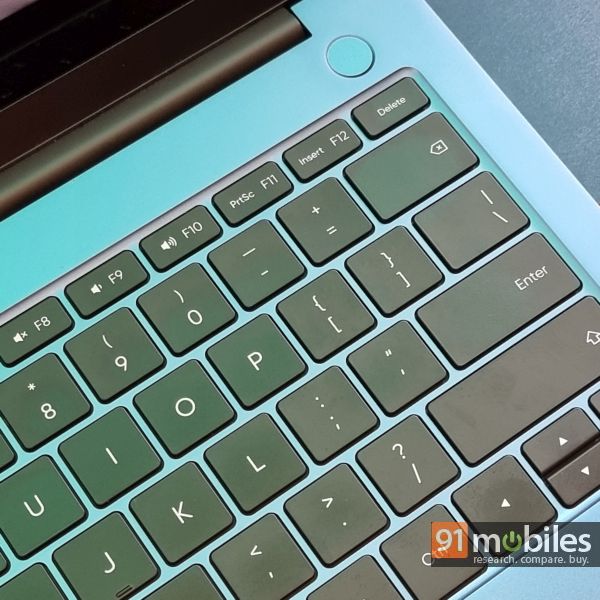 The trackpad is just as good, if not better. The unit offers a large surface and even supports Windows Precision drivers, meaning you can seamlessly use multi-finger gestures. On the flip side, the trackpad’s palm rejection could’ve been better and I accidentally moved the pointer whilst typing on the machine on several occasions.

As prefaced previously, the Realme Book Slim is available in a Core i3 and Core i5 SKU. I was sent the former for review and I must admit, the laptop’s performance took me by surprise (in a good way). Spec-wise, the machine ships with an 11th Gen Core i3-1115G4 dual-core processor that works alongside 8GB of dual-channel LPDDR4x memory that has been clocked at 3,733MHz. For storage, the device gets a 256GB PCIe SSD drive. 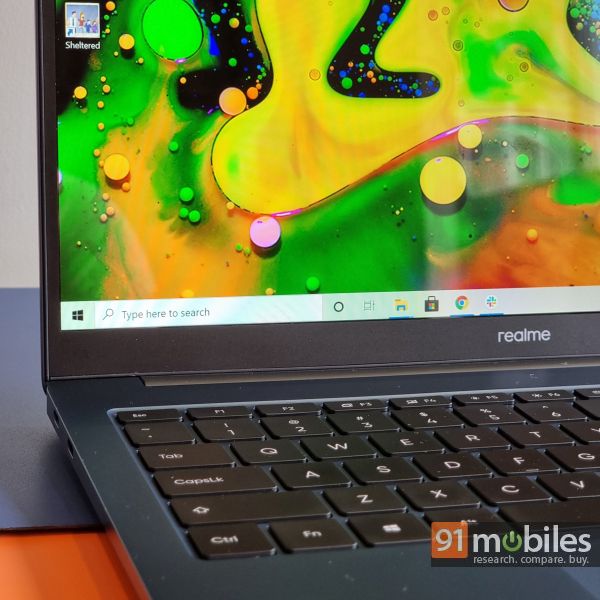 It goes without saying that the Realme Book Slim is not going to set any benchmarks on fire. That said, I know some of you would like to inspect the unit’s performance in synthetic tests, so feel free to browse through the gallery below. Unsurprisingly, the laptop net sub-par numbers in PCMark 10 as well as CineBench R23, both of which task a machine’s CPU intensively. On the bright side, the SSD’s sequential read and write speeds were fantastic, and the Realme Book Slim managed to yield speeds north of 3,000MB/s and 1,000MB/s respectively. What’s more, I could even play some casual games on the unit, including Sheltered and Counter Strike: Global Offensive, albeit with the settings set to low. In CS:GO, the laptop could churn out anywhere between 60-80fps with the settings set to low or very low, and anti-aliasing set to the MSAA 4X preset. The in-game fps would drop below 60fps at times, especially during the heat of a battle; however, the game is playable on the Book Slim. 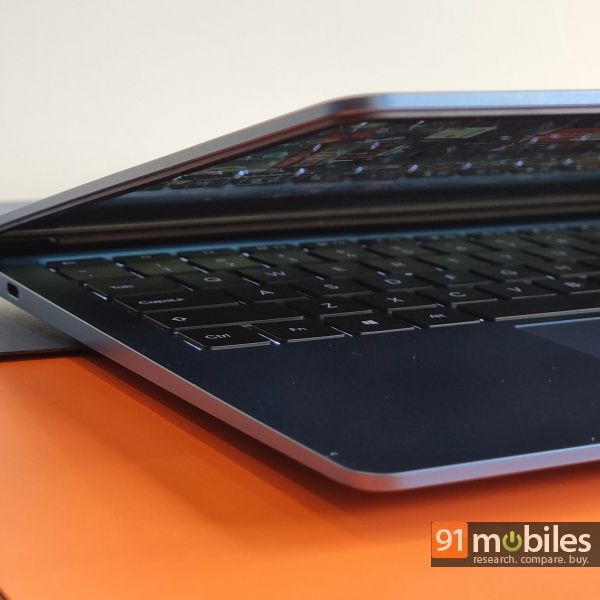 On the bright side, I have no qualms with the laptop’s day-to-day performance and the Book Slim could crunch through my workflow without any hassles. To give you a better picture, I usually have a slew of apps running in the background, including Slack, Adobe XD, Apple Music, and Word along with dozen-odd tabs on Google Chrome. Despite that, the laptop rarely ever showed signs of slowing down, which can be accredited to its speedy SSD and memory. The app load times were rapid too, and the unit could boot to Windows in a matter of seconds as well. 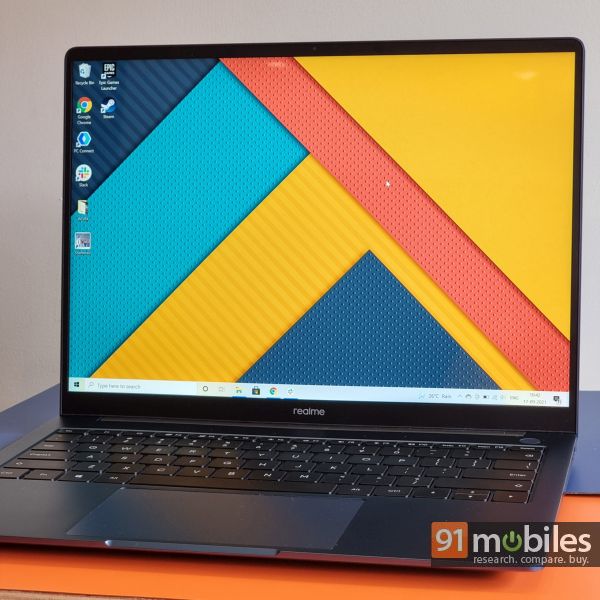 I am more than elated with the laptop’s battery backup too. In fact, the unit managed to last me around eight hours off a single charge with the brightness hovering around the 40 percent mark (keyboard backlit LED was disabled) and the laptop calibrated to the ‘best performance’ mode.

The Realme Book Slim starts at Rs 44,999 for the Core i3 variant and for the price, is a no-brainer. The laptop looks good, offers a fantastic display, performs well, and touts a long-lasting battery backup too. Quite frankly, the Book Slim is the easiest tech recommendation I’ve made so far in 2021. So, if you were looking for a VFM thin and light under Rs 50K, you should keep the Realme Book Slim at the top of your wishlist.

Realme Book Slim PC Connect feature teased ahead of India launch: what is it?

Realme Book Slim laptop teased; could be a cheaper version of Realme Book