Remember the Tata Nano? Of course, you do. The car is known for being the ‘cheapest car’ money could buy. Mind you, the car may or may not have been a worthy purchase, but its ‘cheap’ tag kind of overpowered everything else. That’s the tricky thing with affordable products… if the brand does not focus on getting the basics right, the consumer attention shifts from what the product brings along to the compromises made in the process. Does the Realme C1 (first impressions), the brand’s most affordable offering to date, manage to tackle this complicated task? Read my review down below to find out. 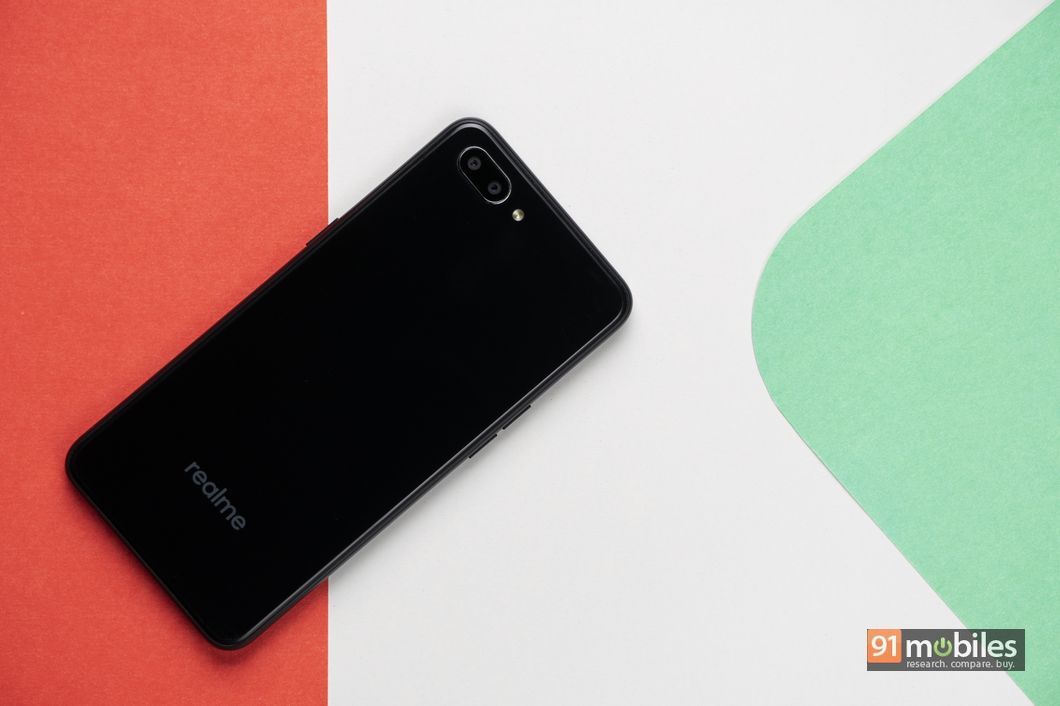 Nobody wants an affordable phone that looks cheap. This is particularly why the design on Realme C1, despite not being extraordinary by any means, is a strong point for the phone. In fact, the design is eerily similar to the one found on the brand’s top-of-the-line Realme 2 Pro. Alas, there’s no fingerprint sensor in this case. Apart from this clear telltale difference, the handset borrows most of its design cues from the Realme 2 Pro. This means you get a glass sandwich design with a dual camera setup at the back and Realme branding in the bottom half. 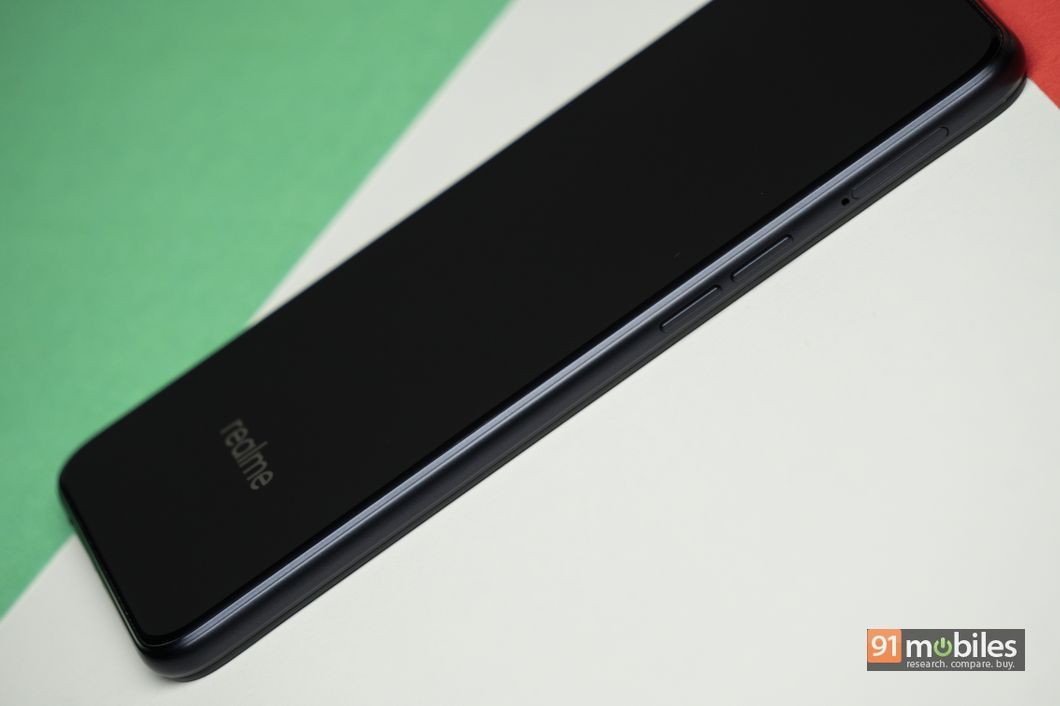 If you like to take screenshots on your phone when using it with one hand, you would love the fact that the volume buttons are placed on the left side of the Realme C1 and the power key is placed on the right. You also get a dual-SIM tray with a separate slot for the microSD card. The speaker grille, the micro-USB charging port, and the 3.5mm audio jack are present at the bottom of the phone in this same order from left to right. When playing games or watching videos on the phone, you will invariably cover the speaker grille and this is a design compromise that we have come to accept from most recent phones. 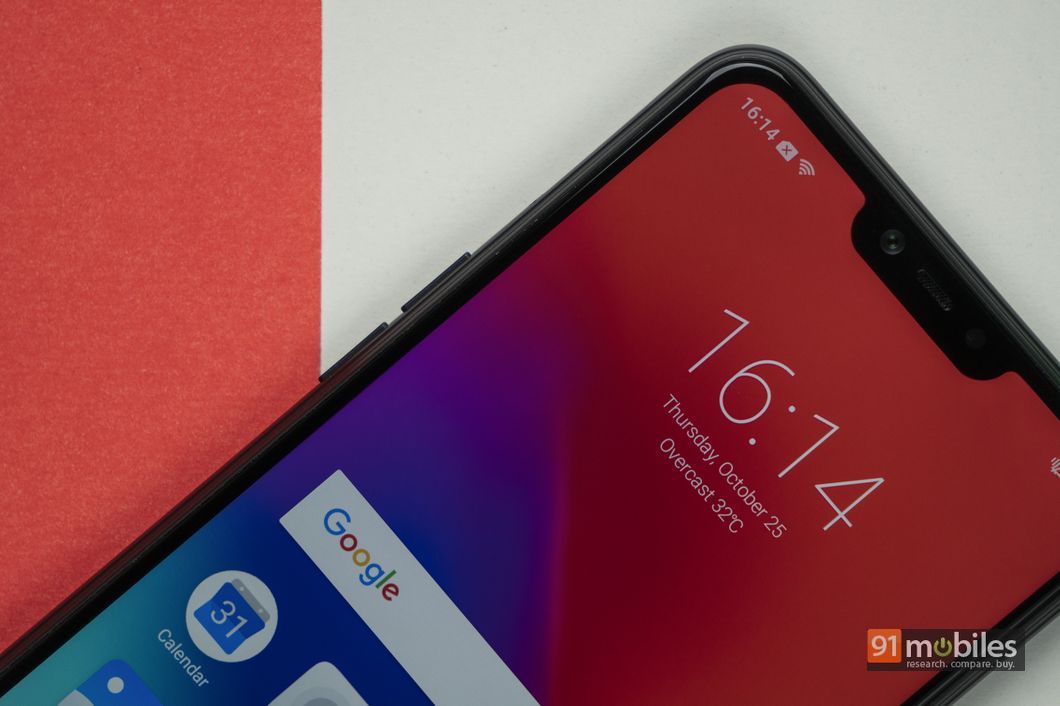 The notch design is now mainstream and Realme has accepted this, much like many of the other Android handset makers. As a result, you a get a panel with 19:9 aspect ratio and a screen-to-body ratio of 88.8 percent, as per the brand’s claim. Again, like other phones with this design, you will not get bothered by the notch a few minutes into using the Realme C1. Talking about the quality, we have an HD+ IPS LCD display that looks vibrant. In outdoor conditions, the maximum brightness of the panel helps to an extent but isn’t all that impressive. Comparing the phone’s display with an FHD+ panel will showcase a lack of sharpness but in daily use, you will not be disappointed. 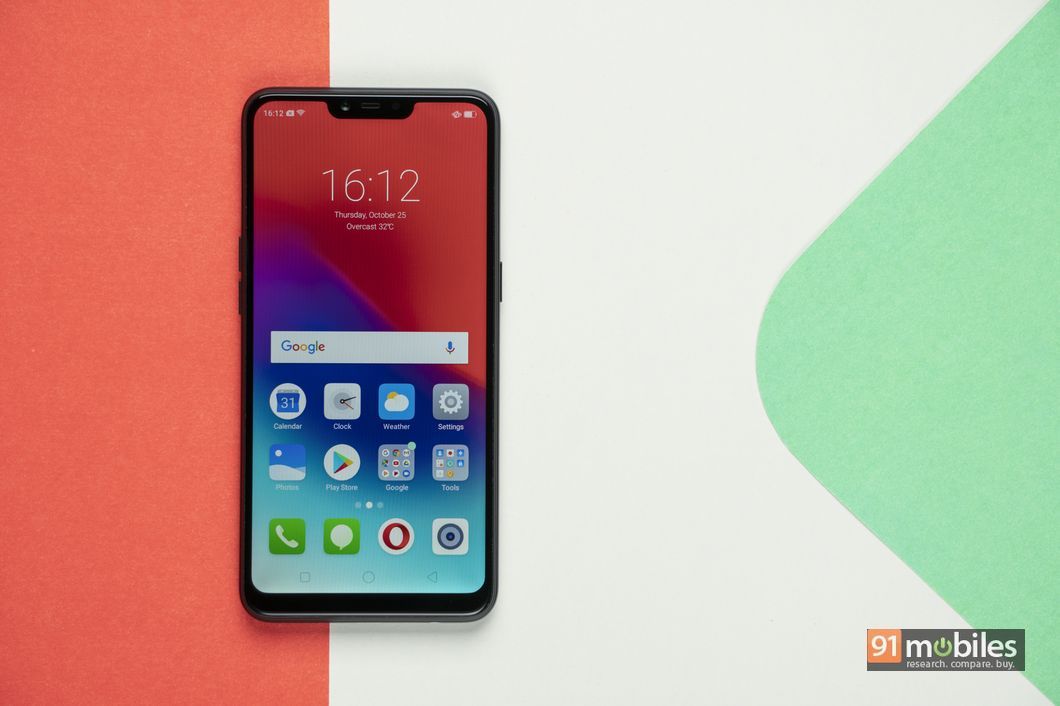 In order to get a second opinion about the phone’s design and display quality, I took the Realme C1 in one hand and the Realme 2 Pro in the other and showed them both (from the front of course) to a colleague of mine for a test. In response to the question “which phone looks more premium?”, my colleague chose the Realme C1. This is not to say that the Realme C1 looks better than the Realme 2 Pro or that the display resolution does not matter. This test simply proves that from a certain distance, the quality in design and display looks very similar for both these handsets. Props to the brand for maintaining this design standard across price segments.

Take a closer look at this ‘budget’ phone with the design gallery embedded below and decide for yourself if it looks good enough to pass as a mid-range phone or not:

When a phone as affordable as the Realme C1 comes with dual camera sensors at the back, I am usually a little skeptical before testing out the optics. This is mostly because there are many examples where the implementation has been done just for the sake of it. However, I was pleasantly surprised by the camera performance offered by the phone. To get the specifications out of the way first, the rear-facing dual camera setup on the C1 consists of a primary 13MP sensor and a secondary 2MP shooter, with PDAF and HDR support. The front camera, a 5MP unit with f/2.2 aperture, comes with an AI beautification mode. 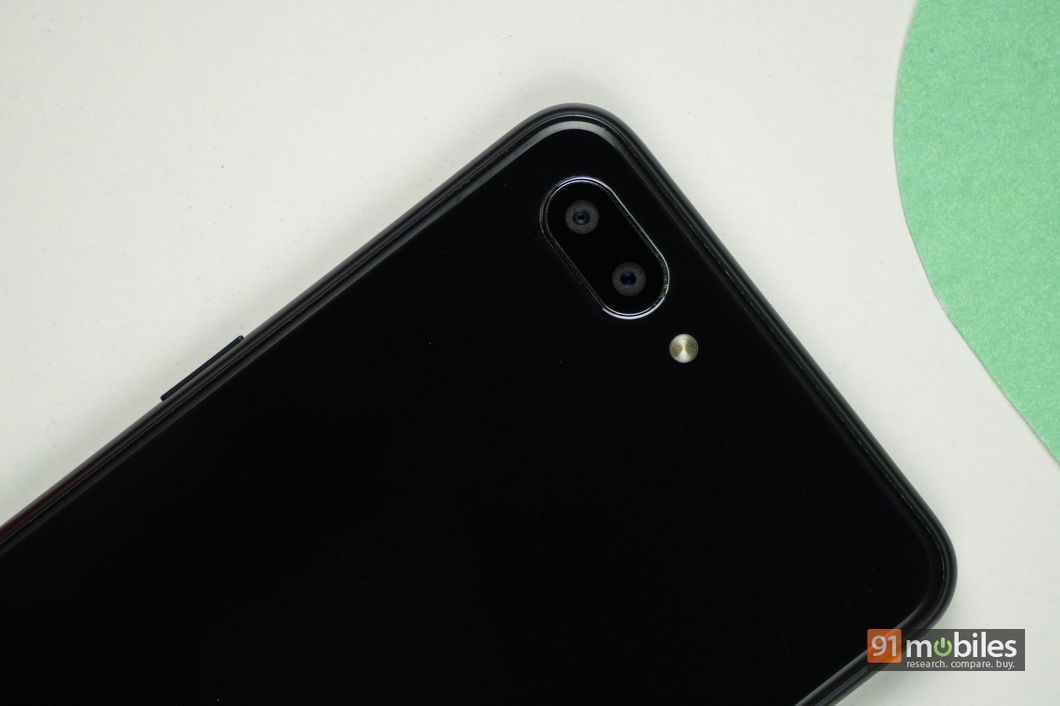 In the default camera app, you are greeted by familiar options like Panorama and Time-lapse, apart from Auto. However, there is no Manual or Pro mode, which essentially allows you to adjust ISO and white balance levels before taking a picture. Most recent phones have this mode and if you are someone who likes to tweak these settings before clicking a picture, this absence is something you should keep in mind before buying the Realme C1.

Now, this is what you need to know about the camera. The details captured by the handset in low-light conditions are underwhelming. However, in outdoor conditions during the daytime, you can expect the phone to take some decent shots. The dynamic range is acceptable but not out of the ordinary. In comparison with the Redmi 6A, which also performed well in well-lit conditions, the phone performed neck-to-neck with the Xiaomi offering. When clicking pictures with AI beautification off, there is still some smoothening going on as the front sensor does a poor job of capturing accurate skin tone and details.

There is no LED flash at the front, unlike the back panel, but the screen lights up when you choose the flash option to help you click slightly better selfies in poor lighting conditions.

Shooting videos is not a fun joyride either as the clips turn out to be very shaky in general. You will be able to shoot videos at up to 1080p resolution with the Realme C1. Overall, for its price range, the Realme offering presents decent camera features and manages to click good pictures, though it does not leave a special mark for itself in this category.

To get a better idea about the camera sensors on the Realme C1, here’s a look at some image samples:

Following the footsteps of other phones from Realme, the C1 runs ColorOS 5.1 based on Android 8.1 Oreo, and provides the same set of features and utility tools to the users as the other handsets in the series. For those of you who have not used ColorOS before, you get certain pre-installed apps but there is not much bloatware. With the Game Space feature, you will be able to manage different aspects of the phone like banner notifications and apply brightness lock from a single place. You can also choose to optimise the phone’s resources according to your gaming preferences. There are Smart Assistant and Quiet time features, which kind of work in the opposite direction, to provide you with plenty of information and help you manage the notifications, messages, and call settings when you need to cut yourself some slack, respectively. 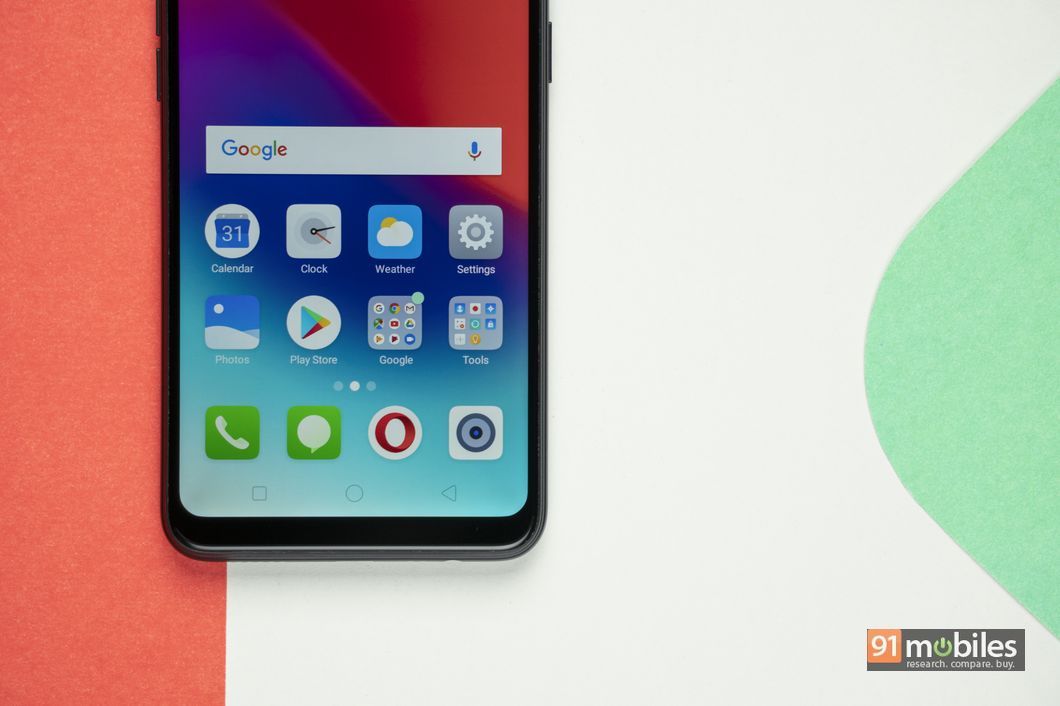 To make up for the lack of a fingerprint sensor, there is a face unlock feature, which worked reasonably fast in the duration of my review. However, it is definitely not as secure as one would hope. I managed to unlock the phone with my face half covered and eyes closed, which is nowhere close to being an ideal security level.

Driving the performance on the phone is a Snapdragon 450 SoC, which can well be described as a trusted choice for performance requirements. Coupled with the processor, there is 2GB of RAM and 16GB of built-in storage, which is expandable up to 256GB via microSD card. In daily usage and navigating through the platform, I did not face any stutter or lag issues with the Realme C1. The animations remained smooth during the review period, although the app content can take a bit too much time to load up on certain occasions. 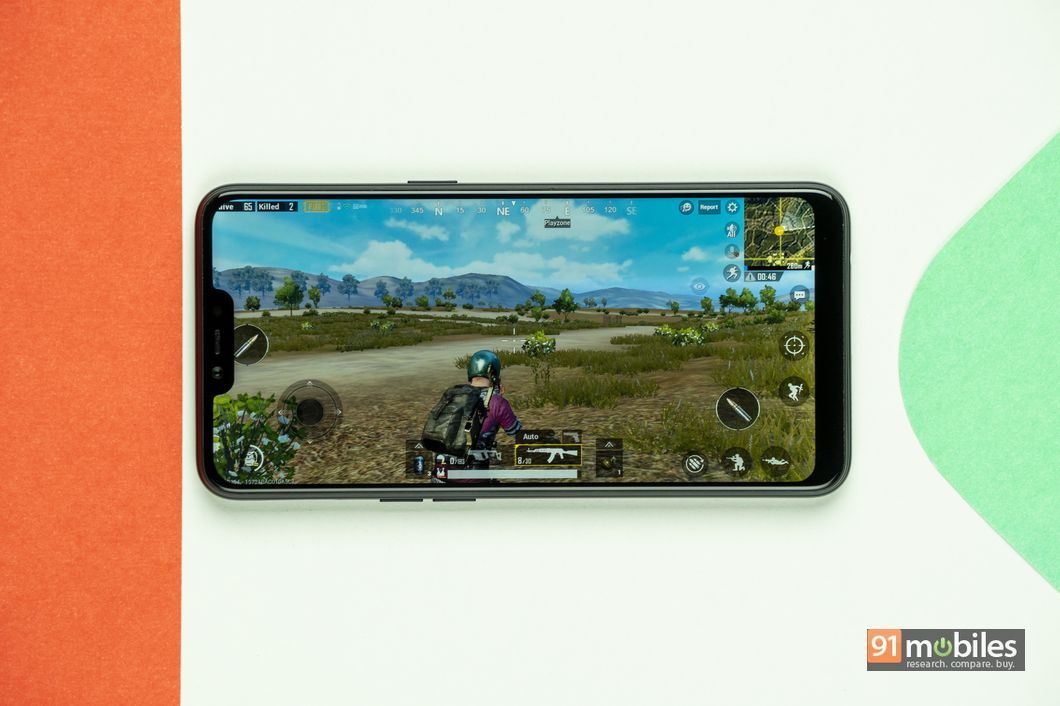 If you like gaming on your phone, you should not be looking phones in this price range but in case you want to occasionally play games like PUBG, the Realme C1 manages to run the game well at lowest graphics settings. There are still occasional hiccups but we are really pushing the phone well beyond its limits in these kinds of use cases.

In casual apps and games, the Realme C1 runs smoothly and as we have a large battery on board, the phone holds up well in real life usage.

Battery life ranks very high for most phone users’ priority list and thankfully, the Realme C1 doesn’t disappoint in this aspect. The handset packs in a massive 4,230mAh battery. Given that the phone has an HD+ display and a power-efficient chipset, the battery life, as expected, turned out to be extremely impressive. Talking about numbers, in our HD video loop test, Realme C1 lasted around 22 hours (yes, you read it right) before running out of juice. In daily usage, I had to plug the phone back in roughly one and a half days after the initial charge. 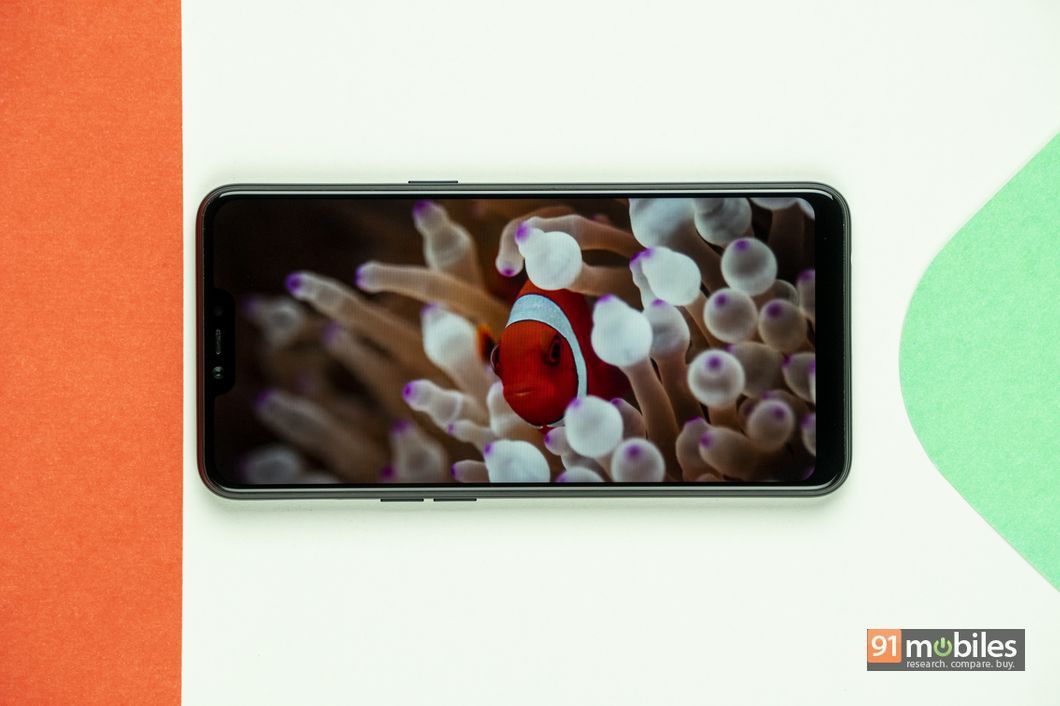 Suffice to say, Realme C1 will be a great companion for you on long road trips and you can leave your bulky power banks at home without worrying much about the battery life.

Truth be told, priced at Rs 6,999, the Realme C1 competes directly with the Xiaomi Redmi 6A (review) in this price category. With a nice design, impressive display, and a commendable battery life, the phone does leave a mark, but certain performance-related issues create a concern for long-term usage. On the other hand, with the Xiaomi Redmi 6A, you get a similar camera quality, smoother performance, but an outdated design and a smaller battery. In the end, it depends on you whether you prefer smoother performance over a large battery or not. From my perspective, the Realme C1 gets a thumbs up for offering good value for money.