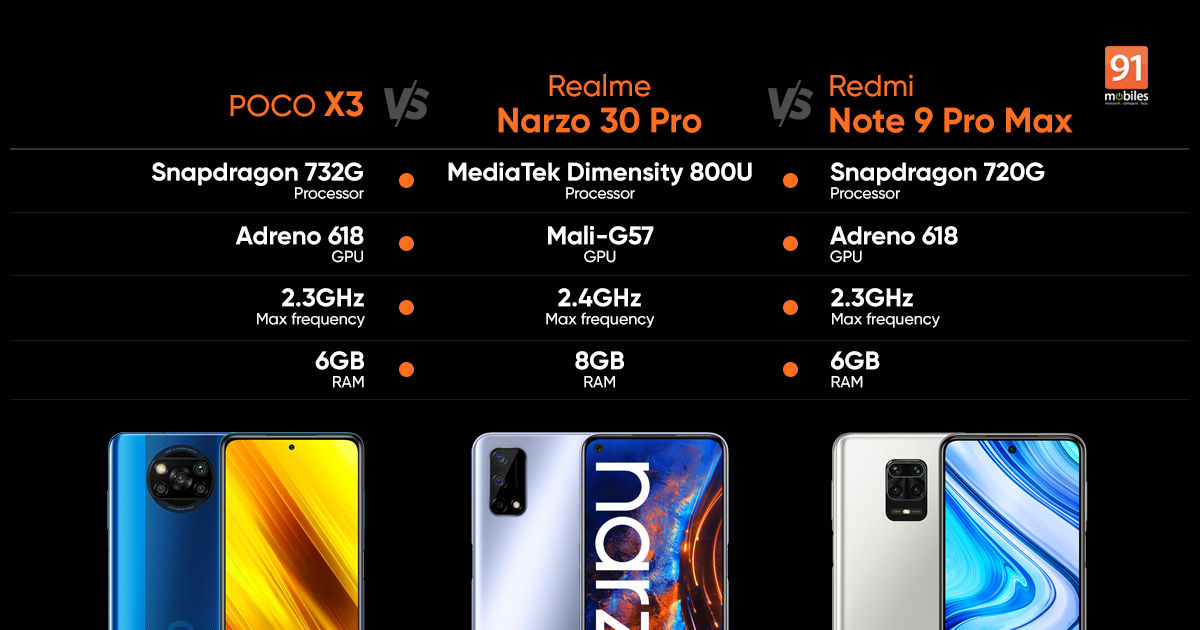 Realme has just dropped two new smartphones in its budget-centric Narzo lineup. The first is the Narzo 30A which happens to be a promising option in the sub-Rs 10,000 segment. The second is the Narzo 30 Pro which comes in at the sub-Rs 20,000 price point and is also the cheapest 5G-capable phone available in the market currently. I have focused on a separate comparison piece for the Narzo 30A which you can read here. However, the Narzo 30 Pro demands an inspection of its own to see how it fares against some of the competing products. There are several contenders, as the lower mid-range category is expanding quite rapidly. For now, I have opted for two devices that are likely to give the Narzo 30 Pro strong competition. First, there is the POCO X3 (review) which shares some features such as a 120Hz LCD display with the Narzo 30 Pro, and is powered by the Qualcomm Snapdragon 732G SoC. Then there is the Redmi Note 9 Pro Max, which is a year-old device, but still packs in quite a punch at Rs 15,999 and is powered by the Snapdragon 720G SoC. 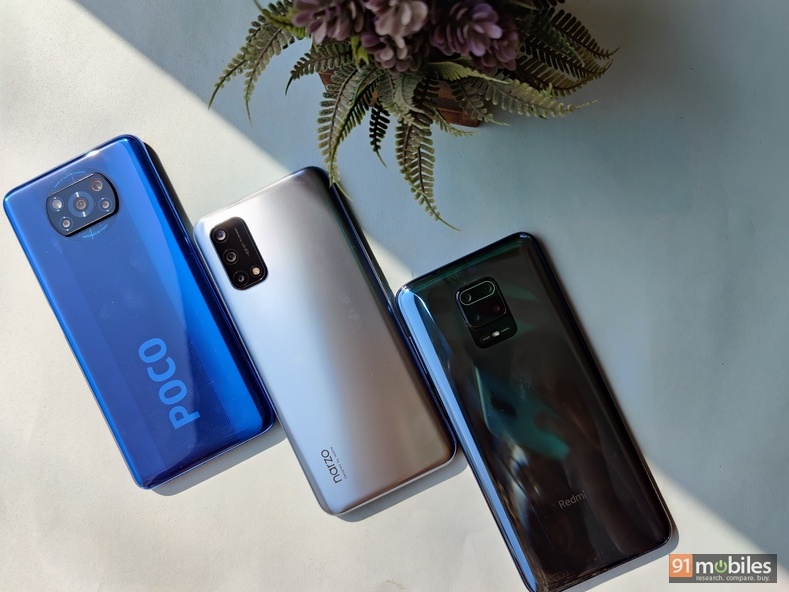 The Narzo 30 Pro has the new Dimensity 800U running under its hood, making it only the second phone after the Realme X7 (review) to use the chipset. Like all modern SoCs, the 800U is an octa-core chipset built around ARM’s big.LITTLE architecture that makes use of two performance and six efficiency cores. In this case, the Cortex A76 cores handle all the major performance needs and have a max clock speed of 2.4GHz. The efficiency cores are the Cortex A55s which max out at 2GHz. You see something similar on the Redmi Note 9 Pro Max’s 720G, which has the older Kryo 465 CPUs running on both the Cortex A76 and A55 cores while the Snapdragon 732G gets the better Kryo 470 CPUs. However, the max clock speeds on both devices’ A76 cores are slightly lower at 2.3GHz when compared to the Narzo 30 Pro’s A76. The 800U also has the advantage of being manufactured using a smaller 7nm process, while both the 720G and 732G are slightly bigger at 8nm. Apart from that, the Realme Narzo 30 Pro in contention does have an extra 8GB RAM as compared to the 6GB RAM on both the other phones. These factors will play a role and it remains to be seen how good all the three devices fare in the benchmarking and gaming tests.

One way to make sure you are getting a reliable metric of performance happens to be through benchmarking. There are several good synthetic tests on the Play Store but the most popular ones are Geekbench, Antutu, GFXBench, and 3DMark. All of them will put either the CPU or the GPU or both to the test and deliver scores that can be used to compare the devices.

Running Geekbench lets the user know how good the single-core and multi-core performance is on the device. The CPU test runs on the platform and generates scores based on how the device performs. In the case of the Realme Narzo 30 Pro, the benchmark gave scores of 583 and 1,793 on single-core and multi-core tests respectively. The POCO X3 returned nearly identical scores of 569 and 1,778 while the Note 9 Pro Max also landed in the same boat with scores of 571 and 1,807. One thing to notice here is that the nearly one-year-old Redmi phone actually has the best multi-core performance of all three devices. This, despite having the older Kryo CPUs as compared to the POCO X3. However, in retrospect, the differences in scores of all three devices are pretty much negligible.

As a synthetic test that stresses the CPU, GPU, Memory, and UI, Antutu is one of the most comprehensive. You get an overall score which is a combination of how the SoC can handle a bunch of tasks. The Narzo 30 Pro packs in the Mali-G57 M3 GPU with a higher 850MHz frequency as compared to the Snapdragon 732G and 720G, both of which have the Adreno 618 that clock in slightly slower at 810MHz and 750MHz respectively. In addition, all phones have LPDDR4X RAM but the Narzo 30 Pro has a slight advantage with a higher frequency of 2.1GHz, while the X3 and 9 Pro Max both max at 1.8GHz. As such, these factors do affect the scores in each category. The Narzo 30 Pro got an overall score of 333,670 on Antutu, which puts it significantly ahead of the 282,394 and 277,621 on the POCO X3 and Redmi Note 9 Pro Max respectively. Notice how the 30 Pro logs a much better GPU score of 90,180 while the X3 comes in second with 78,852 (nearly 13 percent lower). The memory scores are even wider apart with the 30 Pro showing 76,704 that is nearly 30 percent faster than the next best Redmi 9 Pro Max which has a score of 52,321. The CPU scores largely remain the same across all three devices but the Narzo 30 Pro does show a slight lead.

The GPU is a very important part of the chipset’s overall functioning potential and one way to gauge the capabilities is through GFXBench. This benchmark runs a couple of simulations and provides a score on the basis of how many frames were pushed while running the test. Manhattan and T-Rex are two tests that quite accurately tell the story and return an fps count. The Realme Narzo 30 Pro gave scores of 48 and 59fps respectively on both tests. In comparison, the Note 9 Pro Max actually did 59fps on T-Rex but Manhattan showed 37fps, while the X3 had 60fps on T-Rex and a lower 34fps on Manhattan.

I also ran 3DMark’s SlingShot Extreme on all three devices, to get a second opinion on mainly the GPU capabilities but also the CPU as well. Again the Narzo 30 Pro was at the top with a 3,141 overall score as compared to the 2,703 on the POCO X3 and 2,534 on the Redmi Note 9 Pro Max. The Physics score, which is a measure of CPU performance, showed a similar score across all three devices, with the Narzo 30 Pro being a slight shade higher.

The new Narzo 30 Pro appears to be the top smartphone on every metric of the benchmarking tests and especially when it comes to graphical tasks. However, how does all of this translate to real-world usage? A good way to measure this is by running a graphics-heavy game on all three devices.

I would’ve chosen to run PUBG Mobile on the smartphones to measure their graphical capabilities, but the ban on the title has no longer made that possible. The fallback option is Call of Duty Mobile (CoDM), which is not the most intensive of games but still places a lot of stress on the GPU.

First, let’s see what maximum settings is the game allowed to run on all three devices. In the case of the Narzo 30 Pro, I noticed that the CoDM app failed to display the correct Frame Rate (FR) and Graphics Quality (GQ) options. On the settings menu, you will see something to the tune of Medium GQ and High FR, both of which are absolutely not an indication of the in-game experience. I got a very constant 60fps while playing the game, which resembles the Max FR option and there were occasional frame drops during intensive battle moments. The GQ was also much better than what the settings menu was showing. The detailing in the textures, along with character outlines, water reflections, and overall sharpness in the environment was very much on par with High GQ. As such both the POCO X3 and the Redmi Note 9 Pro Max are capable of doing Very High GQ but only with Very High FR. As a better frame rate is more stressful for the GPU, I kept the FR option on Max which automatically reduces the GQ option to High.

A 30-minute gaming session with all phones starting at 100 percent battery was done to check the rise in temperature and the battery drain. The 7nm fabrication of the 800U should help in better power efficiency over the 8nm on both the other devices. One thing to notice here is that the POCO X3 packs in a 6,000mAh battery while the Redmi Note 9 Pro Max and Narzo 30 Pro come with 5,000mAh. As such the Realme Narzo 30 Pro got a battery drain of 11 percent and temperature gain of 12 degrees. The Redmi Note 9 Pro Max drained 14 percent while also gaining 15 degrees in the temperature. POCO X3 displayed the least amount of battery drop at 9 percent, but did get hot with a gain of 15 degrees.

Based on these tests, the Realme Narzo 30 Pro comes across as a better phone for performance-oriented tasks. Realme itself has a variety of options in the under Rs 20,000 range, with the Realme X7 and the Realme 7 series. However, the processing prowess of the Realme Narzo 30 Pro looks solid terms of the cost-to-benefit ratio. It will be interesting to see how Xiaomi and POCO respond with Redmi Note 10 series and a successor to the X3 respectively.