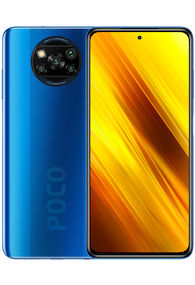 POCO has sometimes been criticised for launching smartphones that look similar to some Redmi phones. The POCO M2 Pro (review), for example, looked like a rebranded Redmi Note 9 Pro. But the POCO X series is where the brand has managed to carve out its own identity. The POCO X2 (review) was launched earlier this year as a stellar sub-Rs 20,000 phone that worked on all levels. It not only offered a 120Hz display (the only phone in the segment to do so at the time) but it also delivered fast performance, a solid quad-camera system, and excellent battery life. The POCO X3 brings a lot of the same features and manages to improve on them in some aspects as well.

The POCO X3 is the first phone in the country to launch with the new Qualcomm Snapdragon 732G chipset. It retains the 120Hz LCD display and 64MP quad cameras while the battery has been bumped up significantly to a whopping 6,000mAh. Let’s find out whether the upgrades make the POCO X3 a worthy successor to the POCO X2 or not. 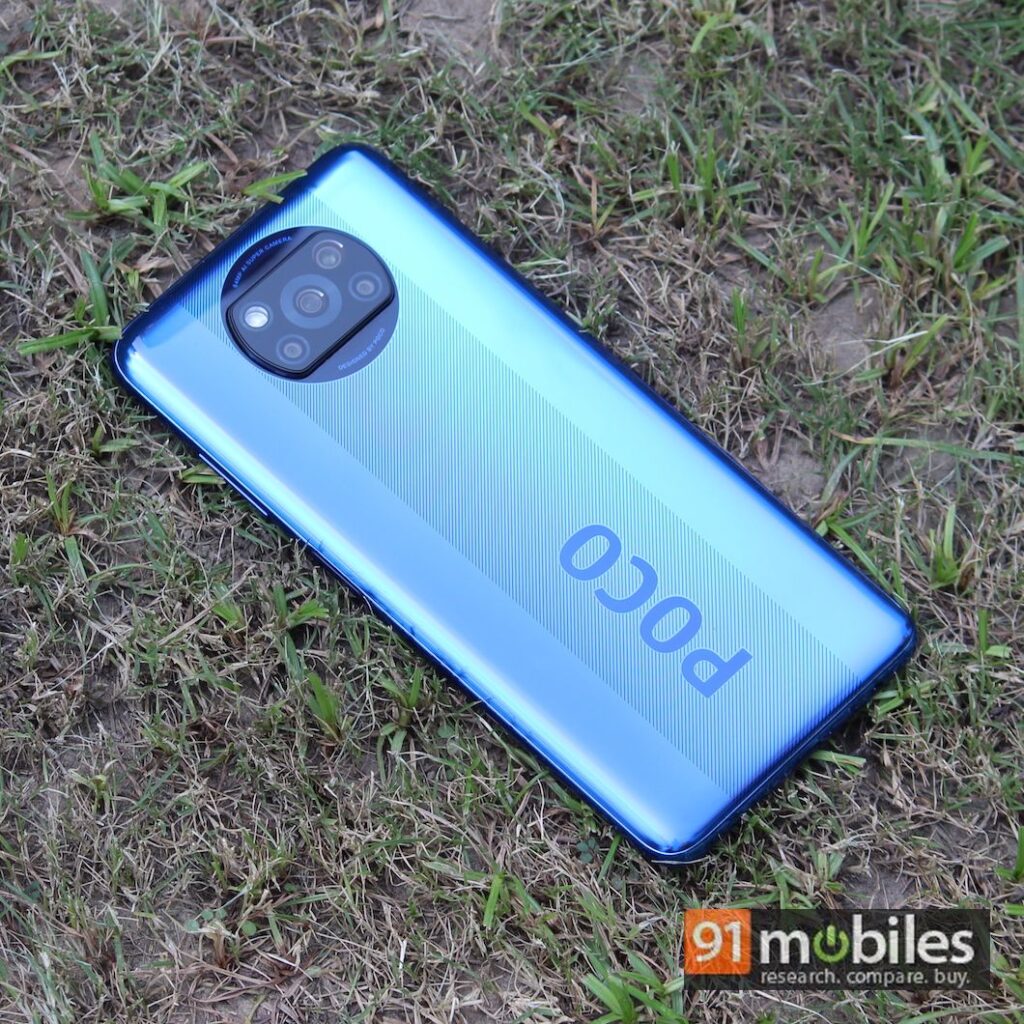 POCO has delivered yet another stellar smartphone under Rs 20,000 in India. The phone delivers smooth performance, an impressive quad-camera setup, and solid battery life, making it a dependable all-rounder. The starting price of Rs 16,999 makes the POCO X3 a no-brainer in this segment.

The first thing you will notice about the POCO X3 is that it has a big and bulky build. It is easily one of the thickest and heaviest phones we have used in this segment in recent times. The phone measures 10.8mm in thickness and weighs 225 grams, which is unusual even for a phone with a 6,000mAh battery. Interestingly, the Samsung Galaxy M51 with a 7,000mAh battery is slimmer and lighter than the POCO X3. The chunky build of the POCO X3 makes it difficult to hold the phone with one hand for a long period of time. 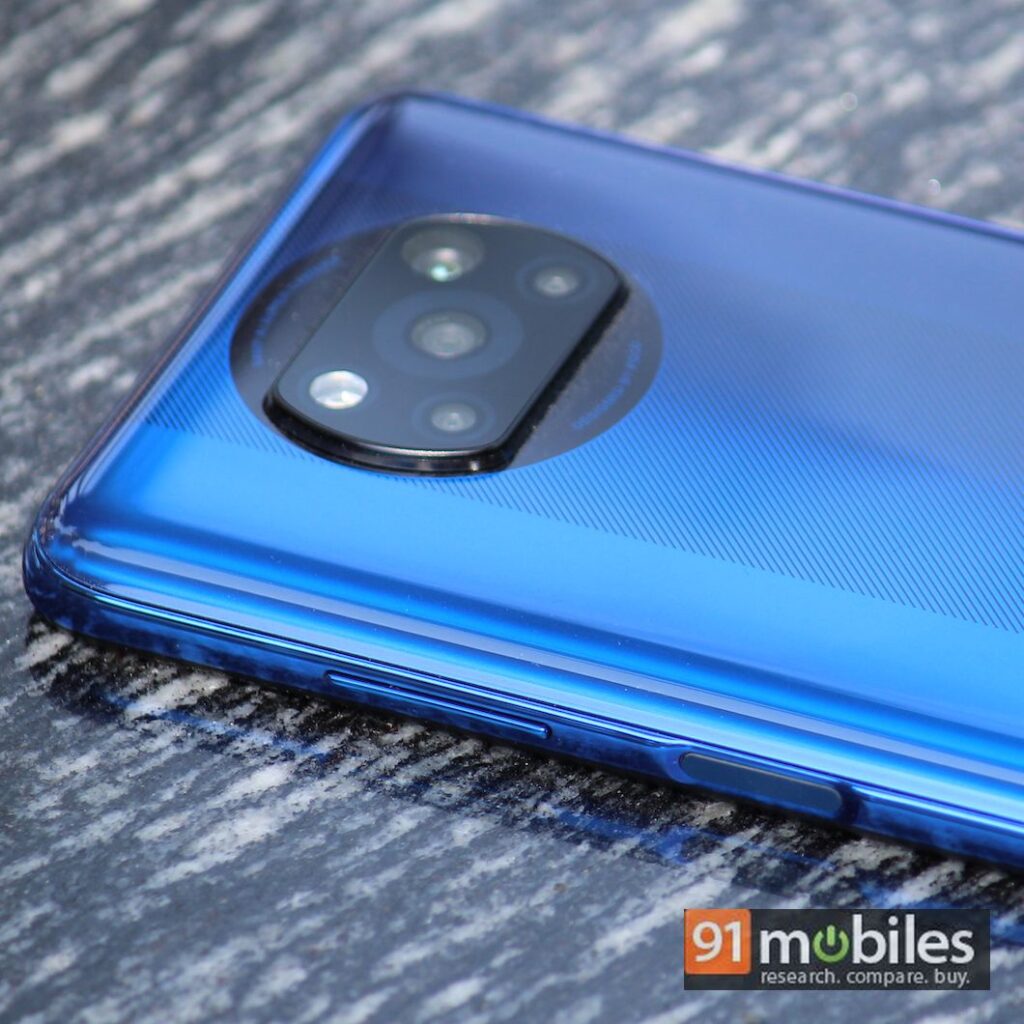 The POCO X3 comes with a curved plastic rear panel in Cobalt Blue and Shadow Gray colour options. The unit we received was in Cobalt Blue, which is a glossy finish that attracts a lot of fingerprints and smudges. The phone gets a quad-camera setup housed in a module that is centre-aligned. The module does stick out quite a bit and tends to gather a lot of dust around it. The rear panel has a striped pattern strip down the middle with large POCO branding on it.

The right side of the frame has the fingerprint sensor embedded in the power button. Just above that, you’ll find the volume controls. The top of the frame has the IR blaster and the left side is the dual hybrid SIM tray. At the bottom, you’ll find a speaker grille, a Type-C port, and a 3.5m headphone jack. The earpiece also doubles up as a speaker to offer a stereo sound support.  The POCO X3 is also IP53 certified for dust and splash resistance. The phone is equipped with a Z-axis Linear Motor that offers nice haptic feedback. 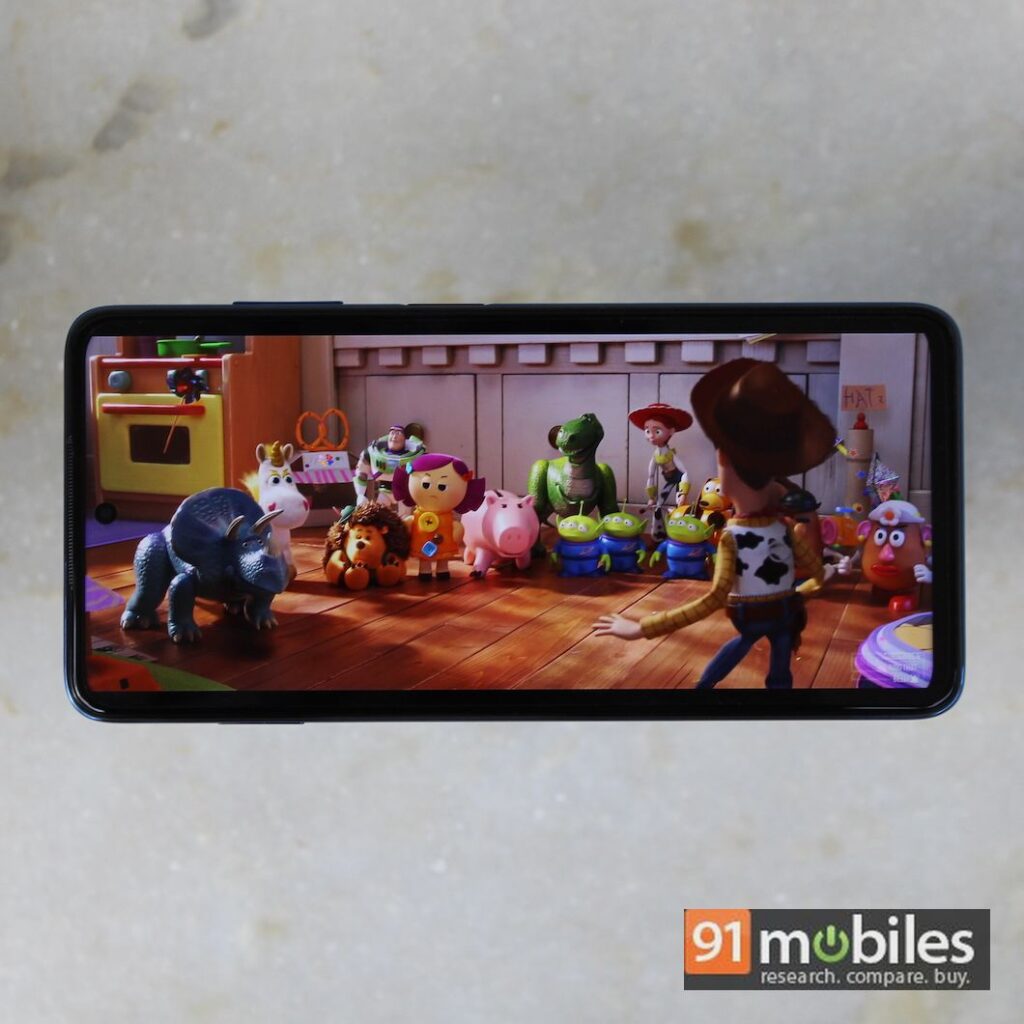 POCO X3 sports a 6.67-inch FHD+ IPS LCD display with Gorilla Glass 5 protection on top and a centre-aligned punch-hole cutout. The display supports a high 120Hz refresh rate to offer a smooth scrolling experience. The display looks decent with punchy and vibrant colours and the size of the screen makes it great for watching content. The 1080p resolution is sharp and we were able to stream movies on platforms like Netflix in crisp high resolution. However, the display doesn’t offer the best black levels and viewing angles are average. We also found the brightness to be a little inadequate under harsh sunlight. Overall, the POCO X3 offers a good display, but it’s not the best in this segment.

The POCO X3 offers a similar quad-camera setup as its predecessor, but instead of the 64MP Sony IMX686, the company has opted for the Sony IMX682 sensor. The primary camera is accompanied by a 13MP ultra-wide-angle lens, a 2MP macro lens, and a 2MP depth sensor. At the front, the phone sports a 20MP camera for selfies. The POCO X3’s cameras are backed by features like AI Skyscaping 3.0 mode, Kaleidoscope mode, Pro mode, Pro colour, and filters like Gold Vibes and Cyberpunk. The camera app takes a while to get used to as it contains all of these varying modes, filters, and options. 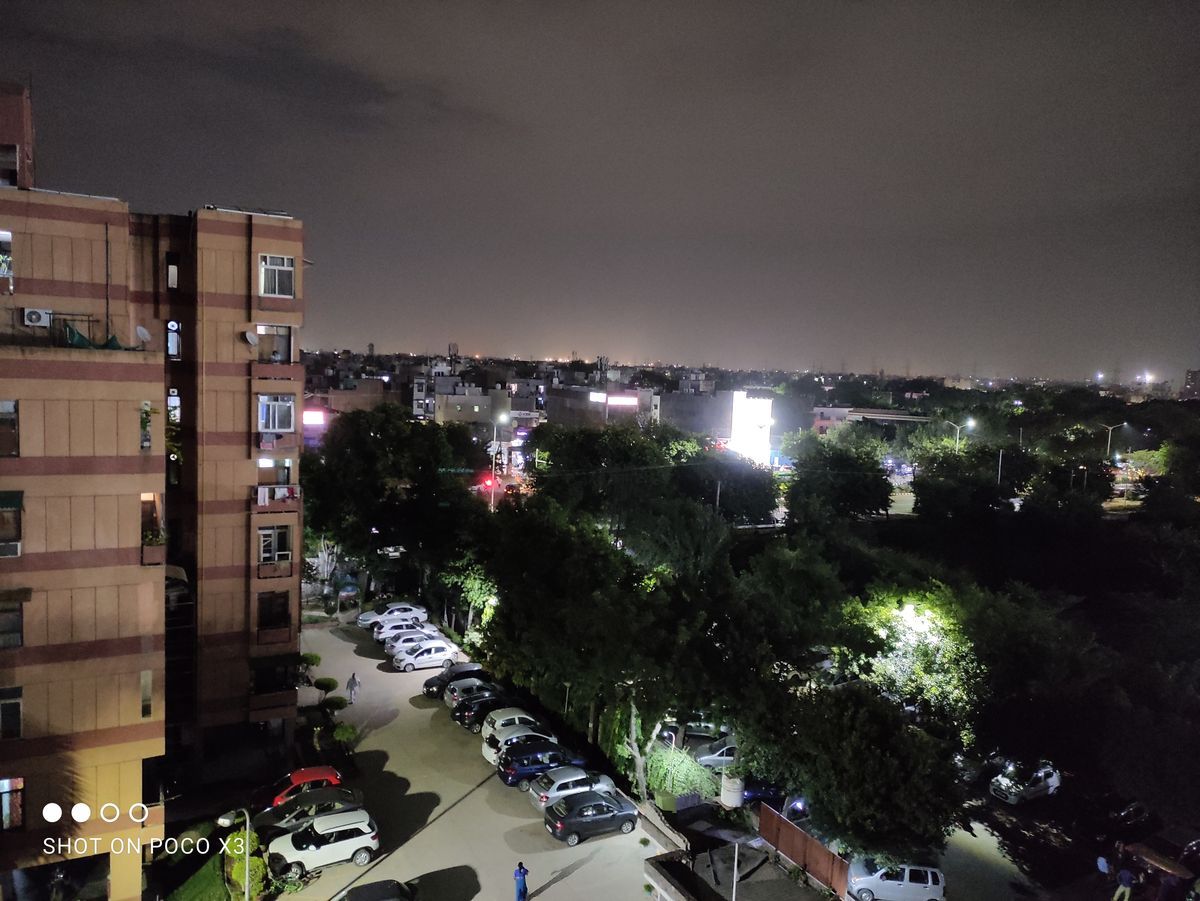 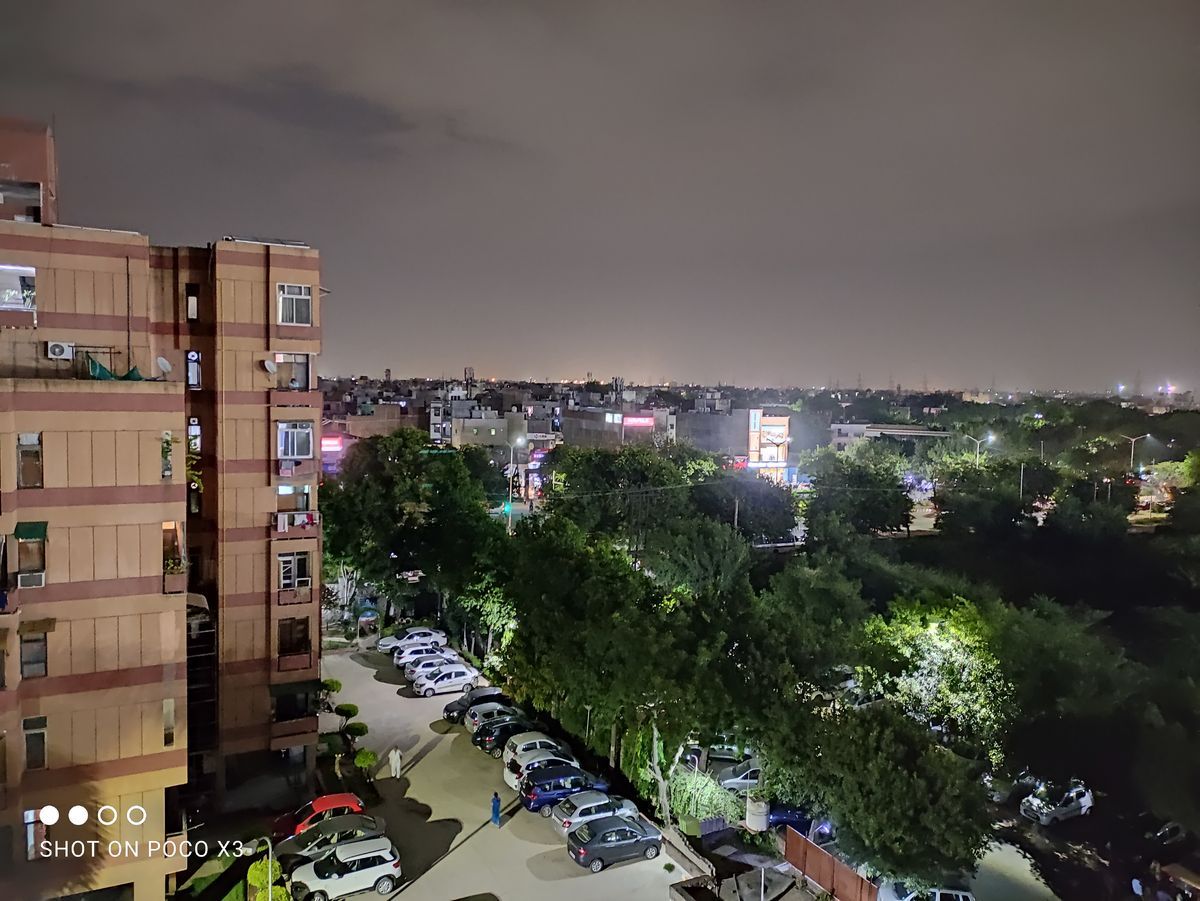 When it comes to daytime photography, the POCO X3 is easily one of the best camera phones in this segment. Photos captured through the 16MP default mode look detailed, bright and rich with colours. There’s good contrast and dynamic range to be found and near-accurate colour reproduction with Pro colour and AI disabled. The Pro colour mode seems to excessively boost colours, especially the reds and greens, which made photos appear loud and unnatural. The 64MP mode can be used if you’re looking to capture extremely detailed photos for cropping. 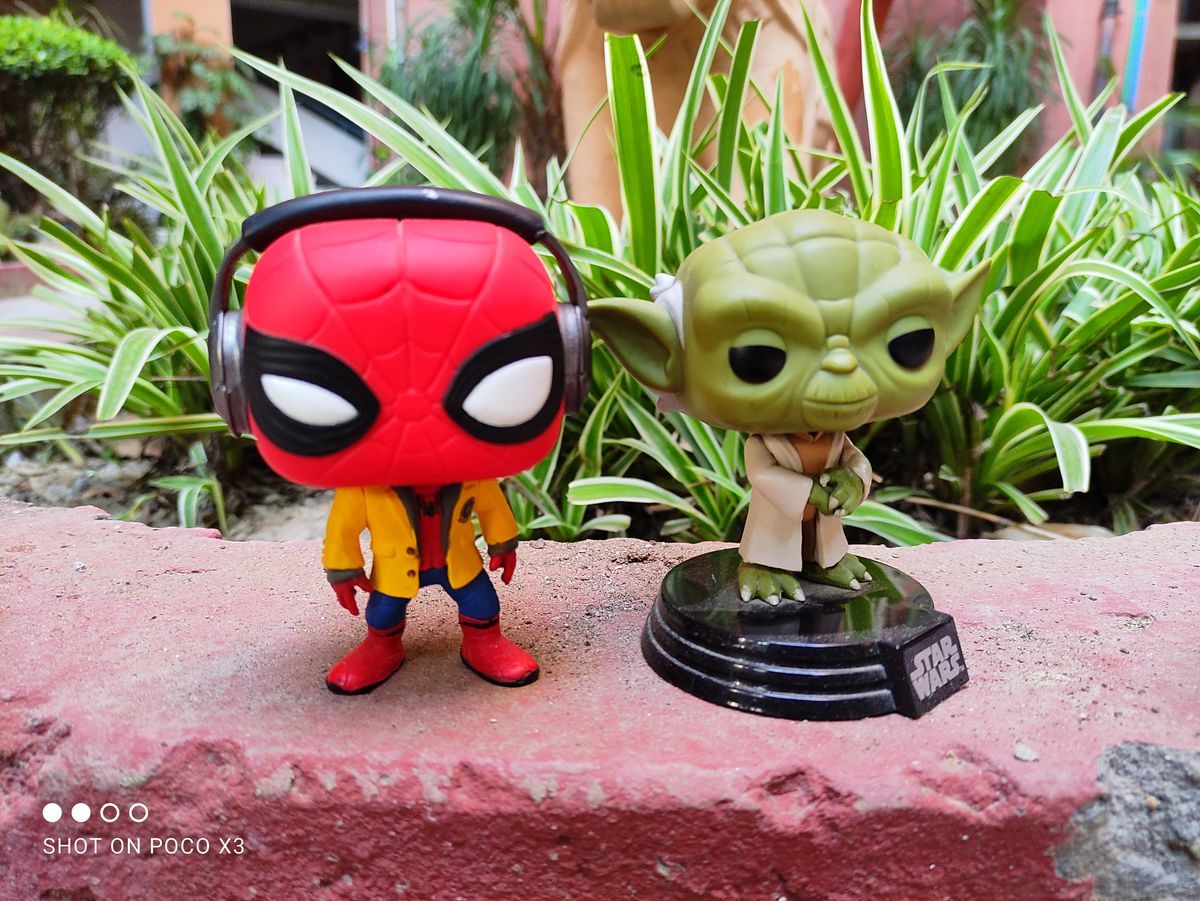 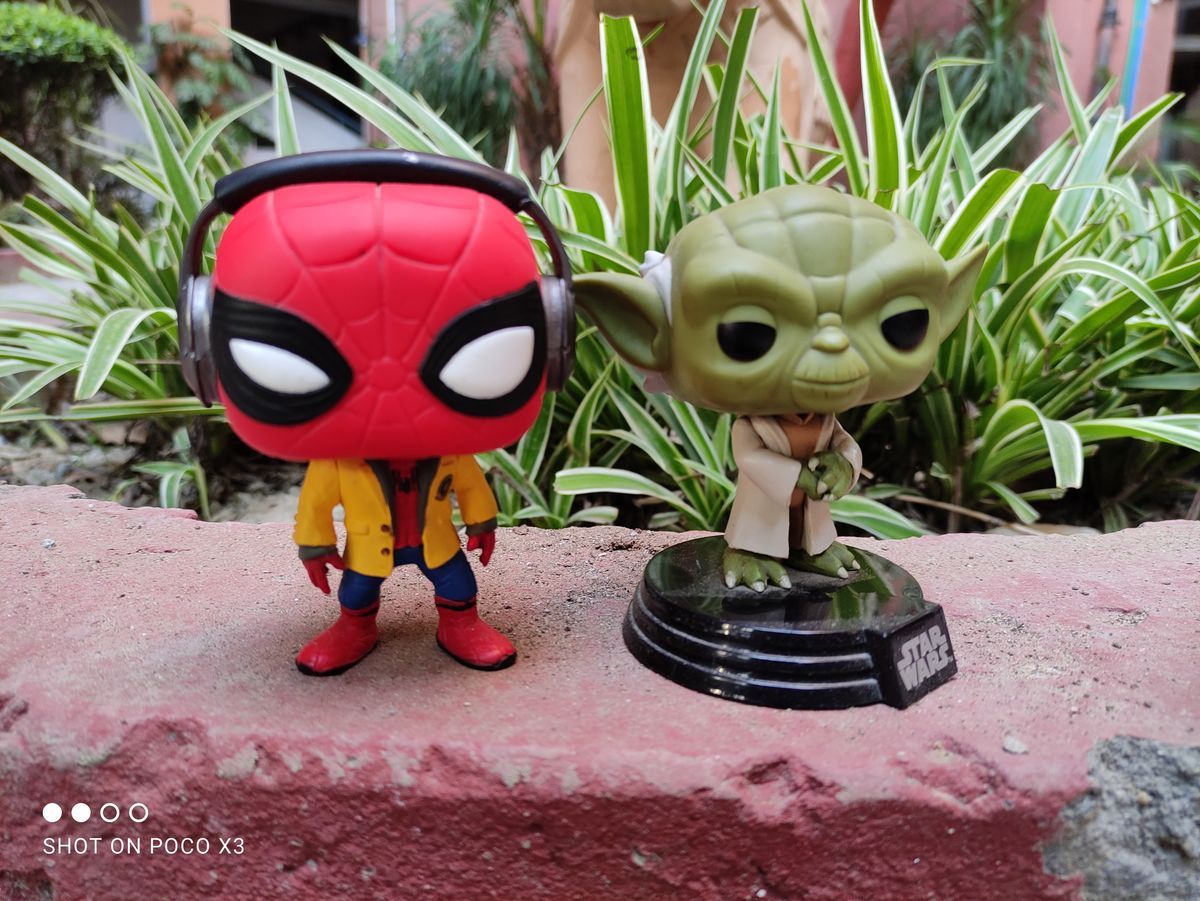 We were also satisfied with the wide-angle photos from the 13MP sensor. There’s adequate detail and we did not notice a drastic shift in colour temperature, which is a common issue with the wide-angle sensor. The 2MP macro lens, while it doesn’t offer the best contrast, manages to capture some good-looking close up shots provided there is ample light around. Even details look good, which is impressive for a 2MP sensor. We were also pleased with the bokeh shots captured in daylight as you can adjust the focal length to make sure you get the ideal portrait shot. In low-light conditions, the Night mode does well to increase brightness, restore blown-out areas, and reduce noise levels to make pictures look clearer overall. In areas with plenty of artificial lights, you can use filters like Cyberpunk and Gold Vibes to add some dramatic flair to the shots. Cyberpunk makes the scene appear futuristic while Gold Vibes has a classic look and feel.

The 20MP front-facing camera can capture crisp selfies in daylight with accurate skin tones and textures provided the beauty effects are turned off. Selfies captured offer pleasing and near accurate colours as well. The portrait selfie doesn’t have the best edge detection, but you won’t be disappointed with the results.

The POCO X3 is powered by the newest Qualcomm Snapdragon 732G chipset, which is a step above the Snapdragon 730G that powered the POCO X2. The newer processor clocks at up to 2.3GHz and is expected to deliver a minor performance upgrade over its predecessor. The Adreno 618 GPU has also been enhanced to offer a 15 per cent faster graphics performance. The POCO X3 scored 282,092 in AnTuTu, which is only marginally better than the POCO X2’s score of 279,444. In Geekbench, the POCO X3 scored 569 in single-core and 1778 in multi-core, which are again minor improvements over the predecessor. This suggests you shouldn’t expect the Snapdragon 732G SoC offers a world of difference in performance. 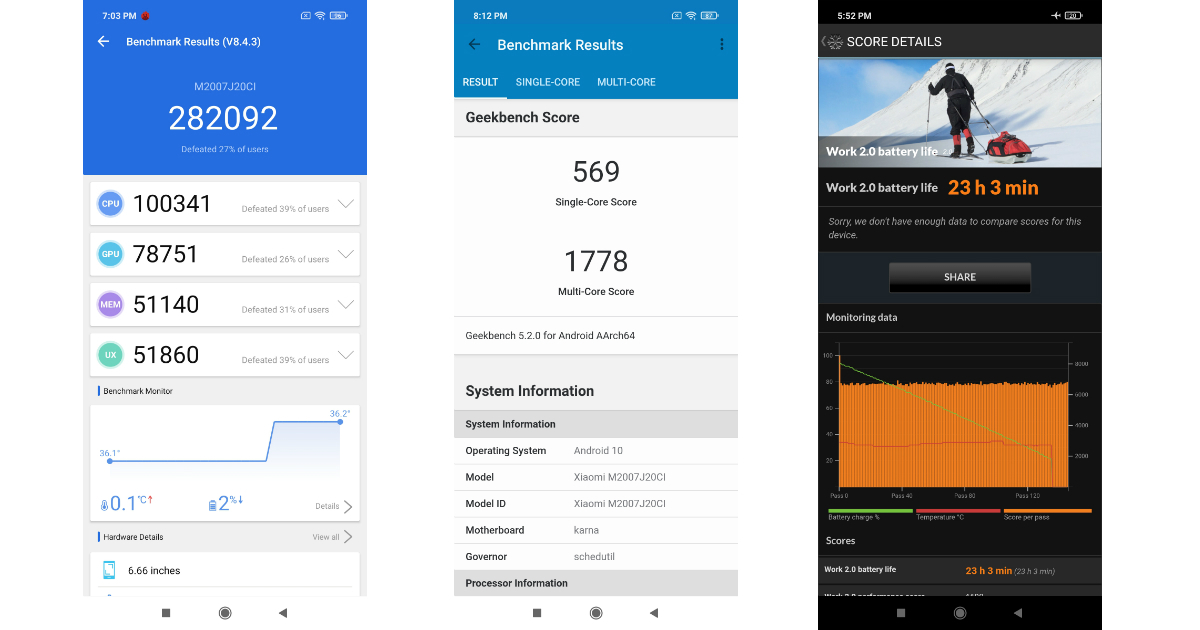 In day-to-day usage, we had no trouble from the POCO X3 whatsoever. The phone handles popular apps like WhatsApp, Instagram, Facebook, and Twitter without any hiccups. Apps don’t open extremely quickly, but the phone doesn’t feel too sluggish as well. The unit we received packed 6GB RAM and we noticed the phone does some aggressive RAM management as it tends to quickly kill off heavy apps like Call of Duty Mobile rather than keep them running in the background for a while. 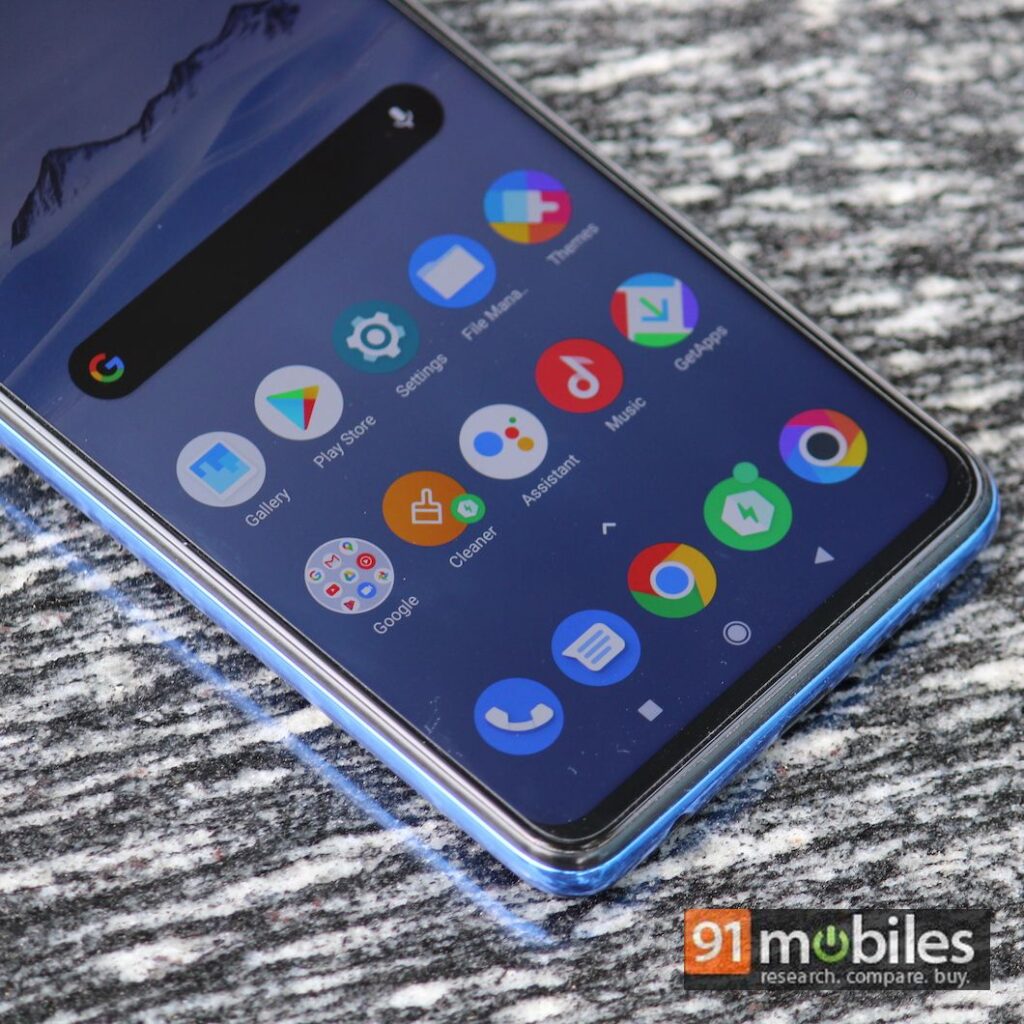 POCO X3 runs Android 10-based MIUI 12 with the POCO Launcher 2.0 on top. This is one of the heavier custom skins out there that can take some time to get used to if you’re coming from a phone that offers a closer to stock Android OS. MIUI 12 comes with tons of pre-loaded apps and bloatware that can be a little too much on the eyes. These include games like Crazy Juicer, Dust Settle, and Block Puzzle Guardian, and shopping apps like Myntra and Amazon. Short-form video sharing apps like Chingari and Zili are there as well. Zili offers some questionable content, which we weren’t very pleased to see and it also tends to push out spammy notifications. You can disable these notifications through Settings. 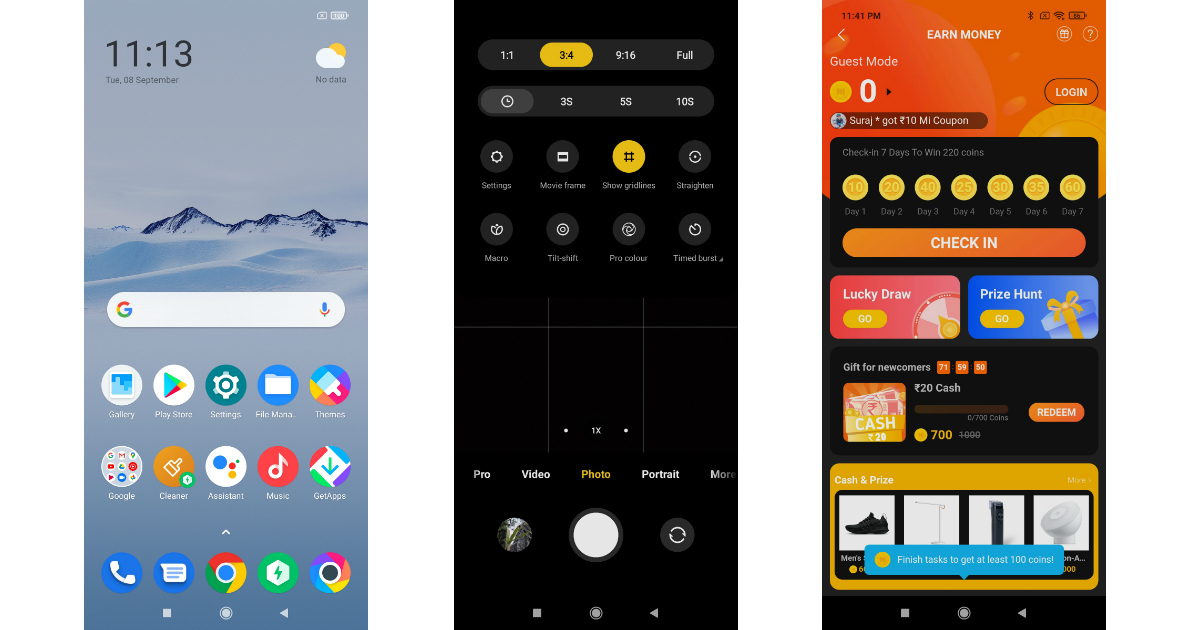 Xiaomi also has its own app store, called Get Apps, which pushes annoying ads and tries to entice customers to earn virtual coins that can be redeemed for cash. MIUI 12 comes with system-wide dark mode, app drawer, Glance with Mi lock screen magazine, Digital Wellbeing, Second Space to keep your data secure, and Game Turbo, among other things, which are all useful features.

The 120Hz refresh rate and 240Hz touch response make the phone feel faster than it really is. It makes the scrolling experience smoother and gaming more responsive. That said, we noticed a few too many stutters as we went about our day, which is probably due to the chipset’s shortcomings rather than the display’s. The stereo speakers on the POCO X3 offer clear sound quality and we had no issues with the volume levels. The side-mounted fingerprint sensor felt snappy and we preferred using it over face unlock.

POCO decided to add a massive 6,000mAh battery as opposed to the 5,160mAh pack and NFC on the global unit. This is why the phone is chunky, but we reckon consumers will not mind the bulkiness if it means getting a better battery life. And the POCO X3 does deliver stellar battery life. The phone can last over a full day even on days with heavy usage that involves a few hours of gaming and video streaming. We were able to get anywhere between 6-7 hours of screen on time with intensive usage. The POCO X3 comes with a 33W charger in the box that is capable of fully charging the device from zero to 100 per cent in a little over 90 minutes. 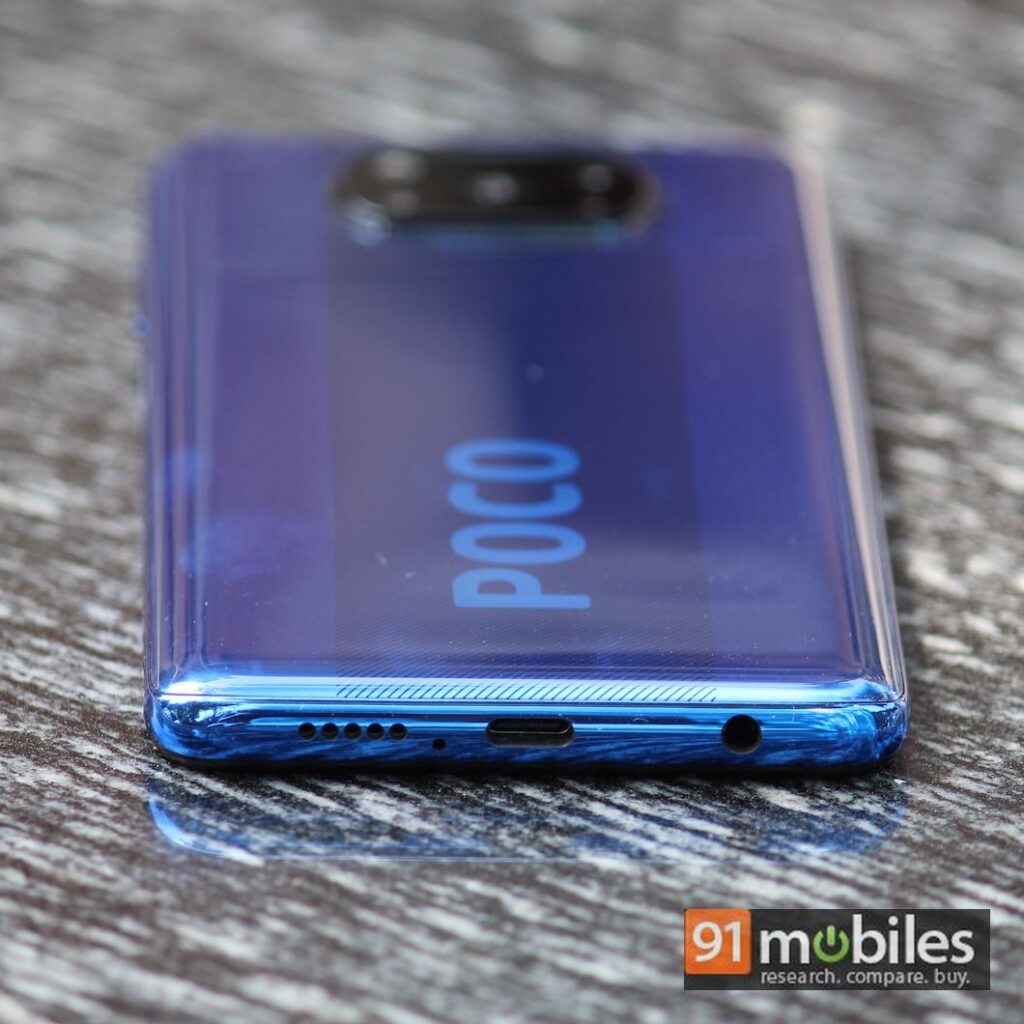 The POCO X3 does not stray far away from its predecessor, which means it is good without needing to try hard. The POCO X2 was already a great phone under Rs 20,000. Less than eight months later, the POCO X3 comes without major upgrades. The Snapdragon 732G is very similar to its predecessor and does not offer a noticeable bump in performance. Yet the POCO X3 feels fast and smooth thanks to the 120Hz display, which is still an uncommon feature in this segment.

The POCO X3 also offers a good set of cameras and a long-lasting battery that came at the expense of the design. There is no denying that this is a chunky and heavy phone with an uninspiring design, which may put people off. It also comes with a fairly bloated MIUI 12 software that delivers spammy notifications and ads. In the same price range, we have phones like the Samsung Galaxy M31s (review) that offers cleaner software and a superior AMOLED display. There’s also the Realme 7 Pro (review) that comes with an AMOLED display and 65W fast charging. These are some options worth checking out. But if you’re looking for a phone that fires from all sides, the POCO X3 is as good as they come.

POCO C50 launching in India this month, set to be a budget offering