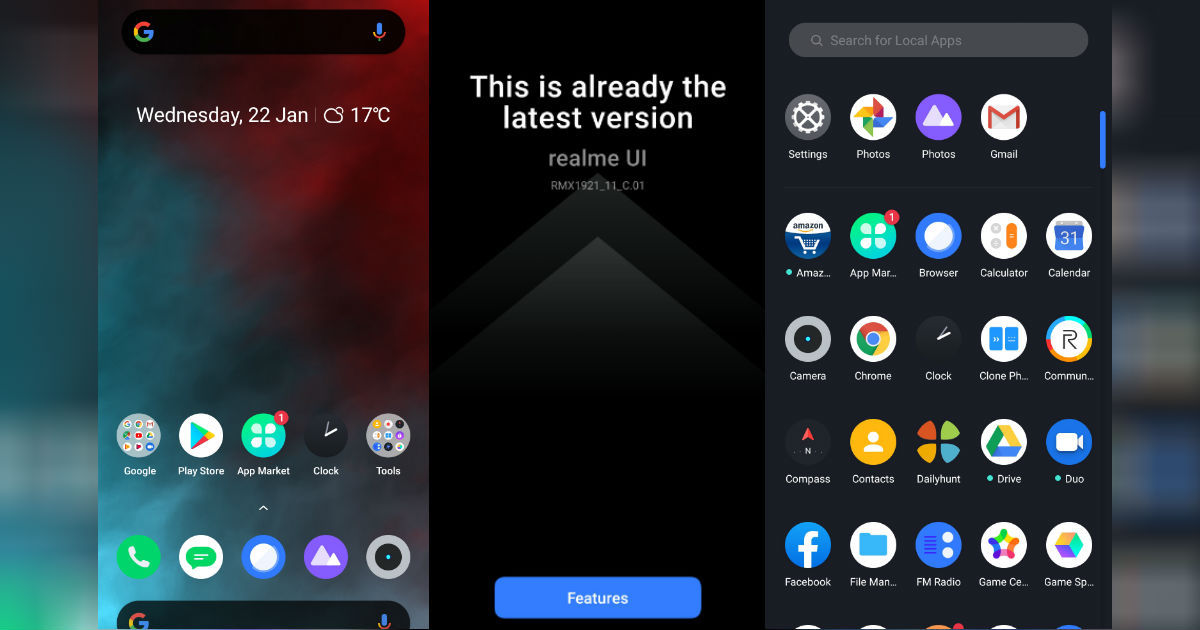 Realme UI, the first iteration of Realme’s own custom skin, has started rolling out to the brand’s compatible smartphones in India. The custom skin, as promised, landed on Realme XT, Realme 3 Pro, and Realme X2 Pro smartphones over the weekend. Lucky for us, we had the Realme XT lying around, and we wasted no time to flash the new Realme UI on it. Here are our initial thoughts about Realme UI that runs atop Android 10.

Realme claims that its UI offers “closer to the stock Android experience”, and we agree. The new Realme UI has lesser bloatware with no weird iOS-inspired elements, as compared to its predecessor, ColorOS 6. However, it’s worth mentioning that the skin is a blueprint of OPPO’s latest custom skin ColorOS 7. You’ll be hard-pressed to tell the differences between the two custom skins as they have similar animations, experience, and features. However, if you’re still trying to find a pin in a haystack, Realme UI comes with slightly better interface design, icons, and typography.

Starting with the home screen, the Realme UI has rounded apps icons – which are customisable. You’ll also see the time and date widget, and the Google search bar. Strangely, the default home screen of the UI has two Google search bars – one sitting below the dock, just like stock Android, and the other up top. Now, if you don’t like the layout, you have the option to change it. The swipe up gesture from the screen reveals the app drawer, while swipe left and right gives you the smart assistant and quick apps window respectively.

The notifications tray on the Realme platform seems reminiscent to Samsung’s One UI, though instead of squarish icons, the Realme UI features circular quick settings icons. Additionally, the selected quick settings icon now has a uniform blue shade and the notifications tray can be swiped down from the middle of the screen (provided you’ve turned it on from the settings) for one-hand usage. To do that, go to phone’s Settings, tap on ‘Swipe Down on Home Screen’ within ‘Home Screen & Lock Screen Magazine’ window, and select Notification Centre.

The Settings menu itself has been redesigned to offer a minimalist design and easy-to-read text. The layout, however, remains the same as ColorOS 6. Lastly, the Realme UI comes with Android 10-based ‘Swipe Gestures from Both sides’ navigation gestures. The navigation allows users to swipe from either side of the screen to go back, swipe up from the bottom of the screen to go to the homescreen, and swipe up and hold to see recently-used apps. If the gestures are not to your liking, there is an option to switch to conventional virtual navigation buttons or Swipe-up gestures.

Realme UI packs a ton of features, which may be inspired from the ColorOS 7, but the company has added a few of its own as well. Chief among them is Dual Earphones mode. This nifty feature allows users to listen to music via both wireless and wired headphones simultaneously. It may sound weird, but the Dual Earphones feature comes in handy when you have company. It can be enabled from the ‘Realme Lab’ option within the settings menu.

Apart from this, Realme UI comes with a ‘Screen Light Effects’ that lights up the edges of the phone’s screen when you receive a call or notification. It looks pretty sleek, but unfortunately, the feature is disabled by default and is said to be limited to Realme smartphone with OLED displays.

Realme UI also makes one-handed usage a little easier. The custom skin comes with a ‘Pull Down to Enter One-Handed Mode’ menu that allows users to enter one-handed mode with just a simple gesture. The mode is buried inside the ‘Navigation Buttons’ option within Convenience Tools in Settings. Once activated, you can simply swipe down on the navigation bar at the bottom of the screen to go into the one-handed mode.

The three-finger screenshot is another nifty feature of Realme UI, again, seemingly inspired by ColorOS 7. The feature not only allows you to capture a screenshot with a simple swipe, but select a specific portion of the screen which you want to include in the screenshot. All you have to do is press and hold with three fingers and then swipe down. Once the screenshot is captured, the UI presents quick options such as share, edit, delete, or save.

Other features include 11 new wallpapers inspired by natural elements, new ringtones, a more refined camera UI and Gallery app, smart sidebar, and Focus Mode that pauses notifications from distracting apps when you’re trying to focus. The Realme UI comes with ‘Personal Information Protection’, which the company claims prevents apps from accessing any personal information of the user.

Furthermore, you can also find core changes of Android 10 in the latest software, such as improved location and privacy controls, Digital Wellbeing & Parental Control, and a system-wide dark mode. Speaking of which, Realme UI gives you the option to automatically turn on the dark mode at sunset and switch it off at sunrise.

Having said all that, Realme UI does bring something new to the table – even though it’s essentially a skin on top of ColorOS 7. We find the Realme XT to be slightly more fluid, and with better animations post the update. There was no lag or latency during our brief usage of Realme UI on the device. Now, we won’t complain about the company picking most of the features from OPPO’s ColorOS 7 for its first iteration of Realme UI, but we do expect the company to experiment a little and pack some unique features in the next iteration.

Realme UI is definitely another step from the brand to become completely independent. All the future Realme smartphones will come with the custom Android skin running out of the box, while the company is slated to upgrade all its previous devices, dating back to Realme 2 Pro, with OTA updates.