“Is the world’s first quad-rear camera smartphone worth your hard-earned bucks? Find out in our review”

Smartphone manufacturers are constantly playing cat and mouse with the headline – “the world’s first device…”. Now, depending upon the smartphone itself, that sentence could mean any number of things. A few months ago, Chinese tech giant Vivo unveiled the world’s first smartphone with an in-display fingerprint sensor. A few years ago, Apple’s iPhone 5S became the first smartphone in the world to ship with a capacitive fingerprint sensor. Suffice it to say, every smartphone company strives to bring innovation which would immortalise them long after their device has been discontinued. 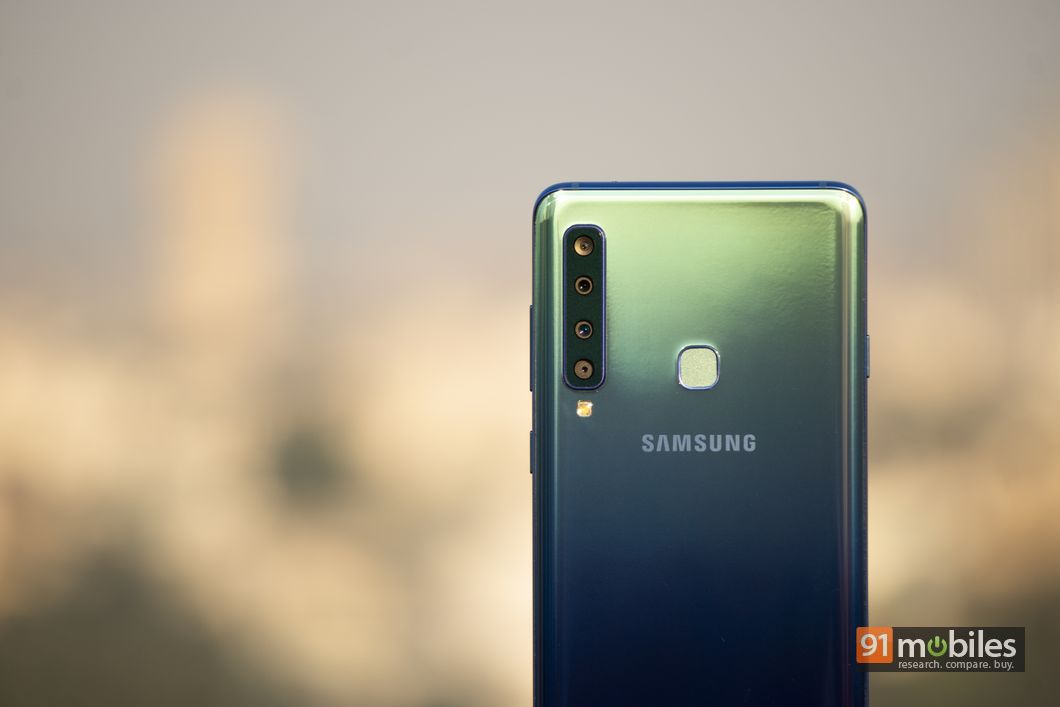 Now, we all know that Korean giant Samsung is no stranger to pushing the envelope in the smartphone realm. Recently the brand unveiled the Samsung Galaxy A9 (first impressions), which is the world’s first smartphone to ship with four cameras on the back. I managed to get my hands on a unit and in this review, let’s see if it delivers on the hype.

If you’ve read our review of the Samsung Galaxy A7 (review), then you’ll know what to expect from the Samsung Galaxy A9, at least in terms of design. Both the devices employ glass on either side held together by a metal frame, sport a notch-free display and are slightly boxier as compared to the company’s flagship S-series offerings. 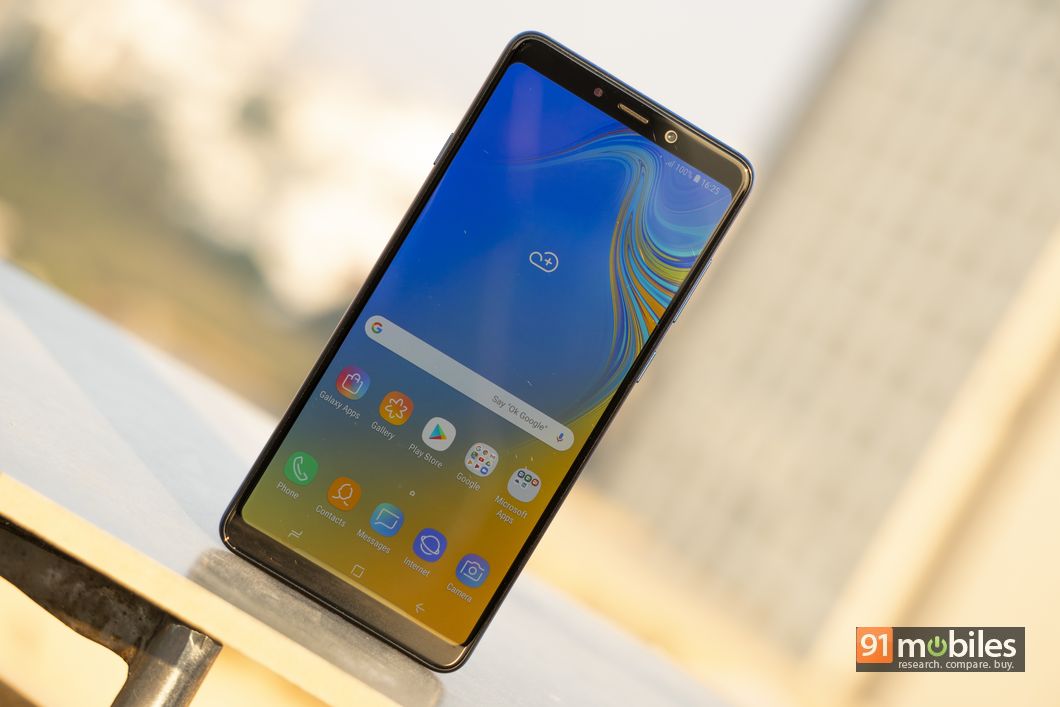 The only difference between the two models is that you’ll get an additional camera sensor at the back with the A9 along with a rear-mounted fingerprint sensor, as opposed to the side-mounted unit on the A7. That, and the presence of a gradient finish which makes the Samsung Galaxy A9 pop. I was sent the Blue colourway of the device to review and although the handset’s colour-shifting back reminds me of devices from brands like Huawei and OnePlus, I am not complaining. The Galaxy A9 looks beautiful and you’ll find plenty of onlookers inspecting the device when it’s in your hands – it’s a people magnet. 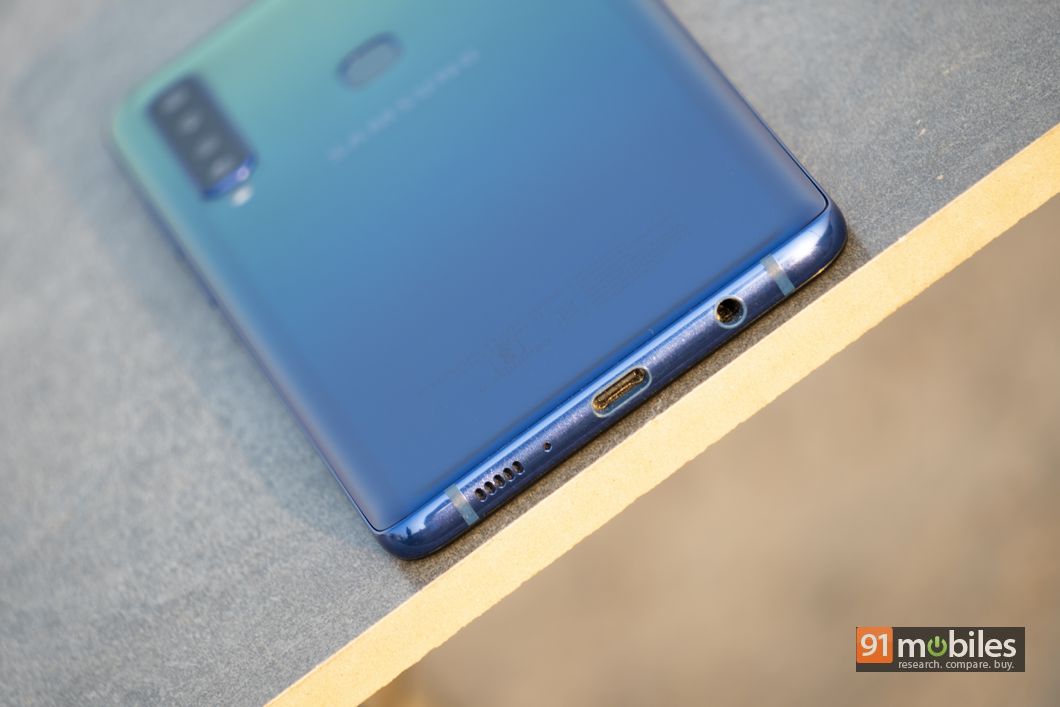 But, what good is a smartphone if it’s all scuffed up from accidental drops, amirite? Well, while the Samsung Galaxy A9 is slippery, the smartphone’s curvy back and the frame’s excellent weight distribution does wonders for the grip. So much so, I didn’t feel the need to slap on a case on my review unit. Unfortunately, unlike the Galaxy A8, the Galaxy A9 doesn’t ship with IP68 certification, which is a huge bummer. Therefore, you’ll have to think twice if you’re the type to take your smartphone to the bathroom. 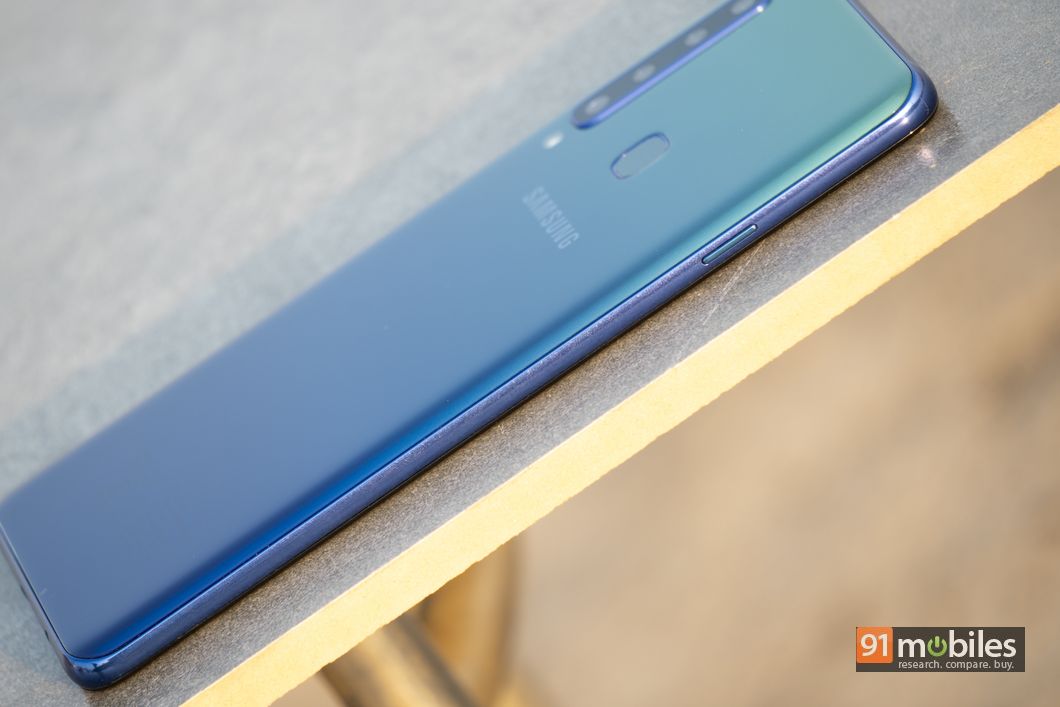 As of late, the company is pushing its Bixby AI into more and more devices and the Samsung Galaxy A9 too sports a dedicated Bixby button. Unfortunately, you still cannot remap the key to a different application or function and as it stands, Bixby causes more problems than it solves. Therefore, you’d be better off disabling the functionality and using the toggle to curb your fidgeting needs. 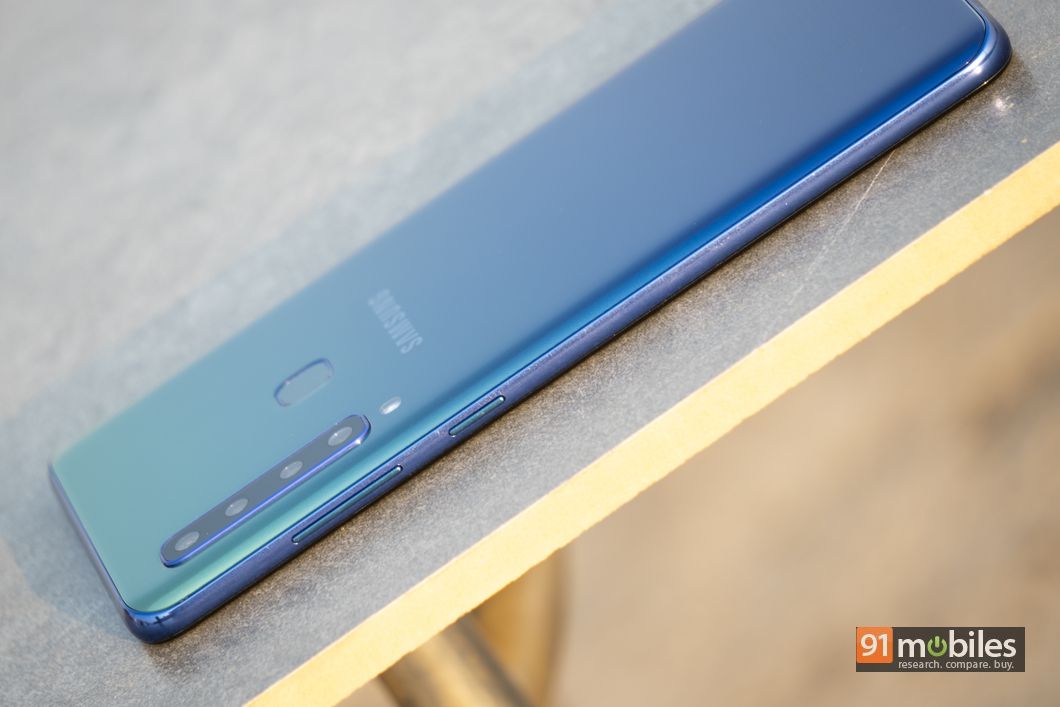 Moreover, despite its sleek bezels, the Samsung Galaxy A9 is still a big smartphone and since the power button and the volume rocker are positioned towards the top of the handset’s frame, you’ll find yourself using the smartphone with two hands more often than you think. Lastly, the rear-mounted fingerprint sensor on the device is downright terrible and I couldn’t use it to unlock the smartphone seamlessly. Thankfully, the company’s intelligent scan (which combines face and iris recognition to unlock the phone) is quite reliable, albeit a bit slow.

Adding to the smartphone’s pros list, the device also ships with a 3.5mm headphone jack, which is great if you already had a pair of 3.5mm earphones lying around. 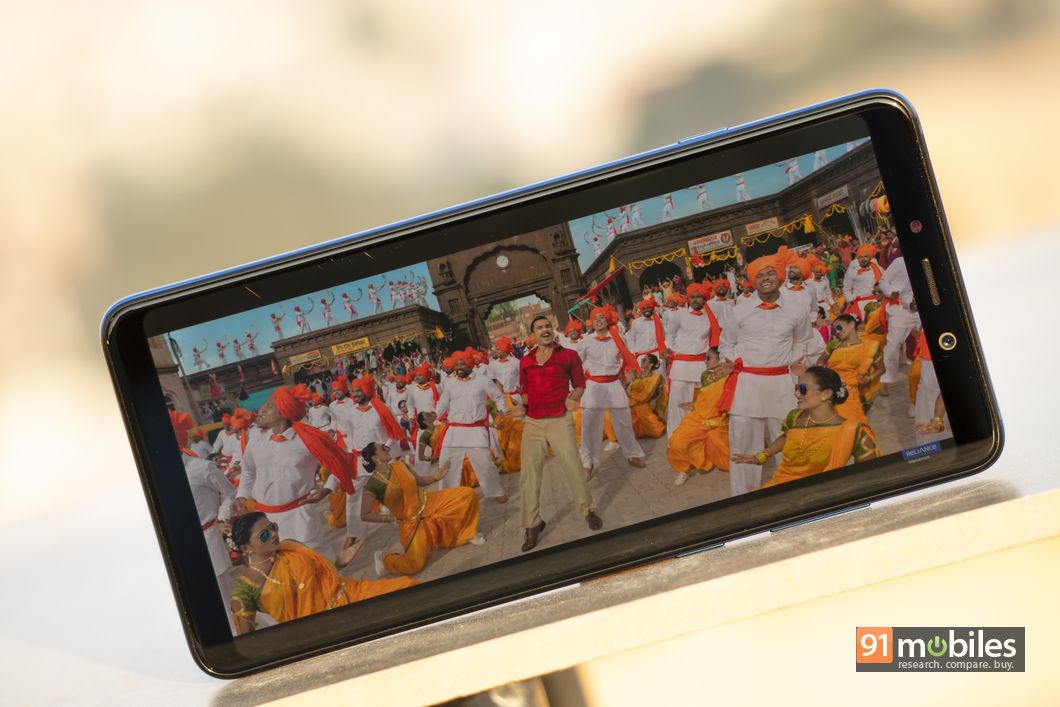 I’ve said it before and I’ll say it again – Samsung makes some of the best displays in the biz and the Galaxy A9 is no different. The smartphone ships with a 6.3-inch Super AMOLED panel with FHD+ resolution which exhibits vibrant hues and boasts an excellent contrast ratio. Coupled with the display’s excellent peak brightness levels, the Galaxy A9 is a great smartphone to watch movies and shows on the fly.

In predictable Samsung fashion, the company’s Galaxy A9 is powered by a silicon which is usually found in devices costing significantly less. The handset is backed by Qualcomm’s Snapdragon 660 chip which works alongside either 6GB or 8GB of RAM. My review unit shipped with 6GB of memory, which has been paired with 128GB of built-in, user-expandable storage. Understandably, the Samsung Galaxy A9 is not going to rival the likes of OnePlus 6T in terms of raw compute prowess, but it gets the job done. 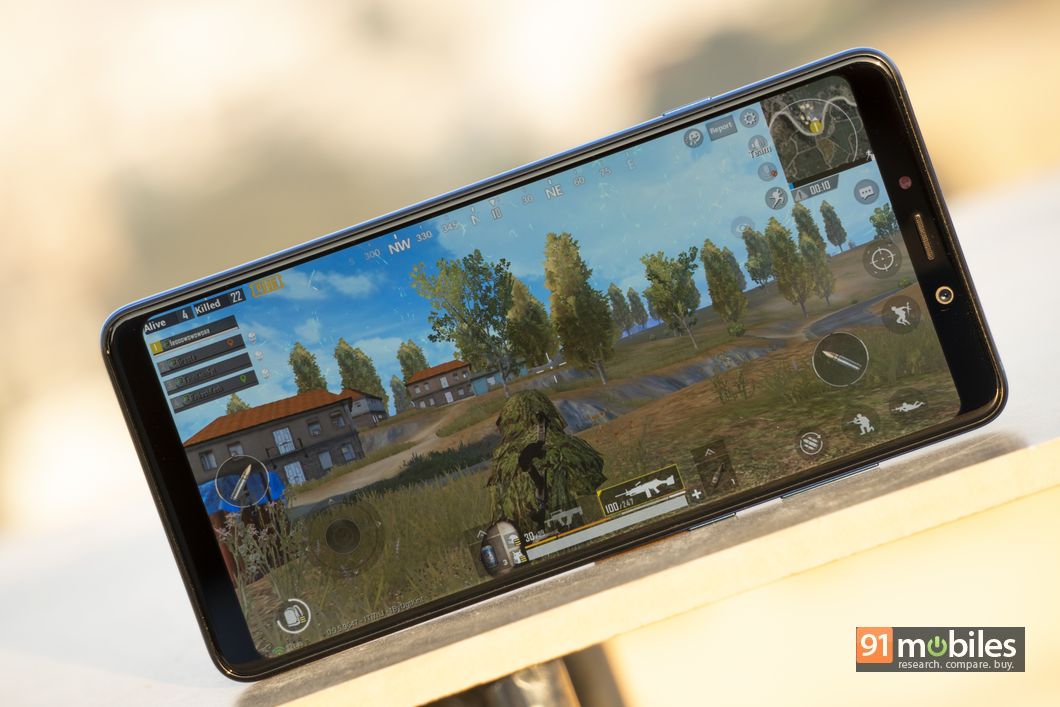 During my time with the smartphone, I didn’t notice any major stumbles in the performance department. Apps opened quickly, games ran smoothly (albeit a low graphics settings) and multitasking was, for the most part, a breeze too. There were some occasional stutters here and there but they were mostly limited to Samsung’s custom launcher. In terms of gaming, you will be able to run intensive titles like PUBG on the device, albeit at the medium graphics preset. On the other hand, if you’re more of a casual gamer, then you will find no issues playing titles like Clash Royale, Air Control 2 and Battlelands on the device. Overall, the Samsung Galaxy A9 performed admirably, but I kept wanting to go back to my OnePlus 6T.

As for software, the smartphone runs the brand’s Experience UI v9.0 on top of Android Oreo. Seeing how the company’s flagships are yet to receive the Android Pie update, you might have to wait a while for the update to roll out to the A-series of devices. Thankfully, the handset does run the latest security patch from Google and over the years, the company has managed to cut down on the bloatware it bundles with the software. On the contrary, you’ll find plenty of useful features with the skin, such as the ability to switch the navigation buttons, support for gestures as well as floating windows, which lets you open various apps in small, resizable windows.

In the battery department, the Samsung Galaxy A9 ships with a massive 3,800mAh cell which will easily get you through the end of a day on heavy use. During my time with the smartphone, I managed to go from 11AM to 10PM off a single charge, with my usage involving playing PUBG for an hour, watching several videos on YouTube and using WhatsApp and Instagram constantly.

Let’s address the elephant in the room, shall we? The Samsung Galaxy A9 is truly the world’s first smartphone with four rear-facing cameras, which is no small feat. Going from top to bottom, the handset comes equipped with an 8MP, f/2.4, 120-degree wide-angle lens, a 10MP, f/2.4 telephoto lens, a 24MP, f/1.7 main camera and lastly, a 5MP, f/2.2 depth sensor. On paper, the Galaxy A9 hopes to replace your camera bag full of lenses, but in practice, the shots I took with the smartphone leave something to be desired. 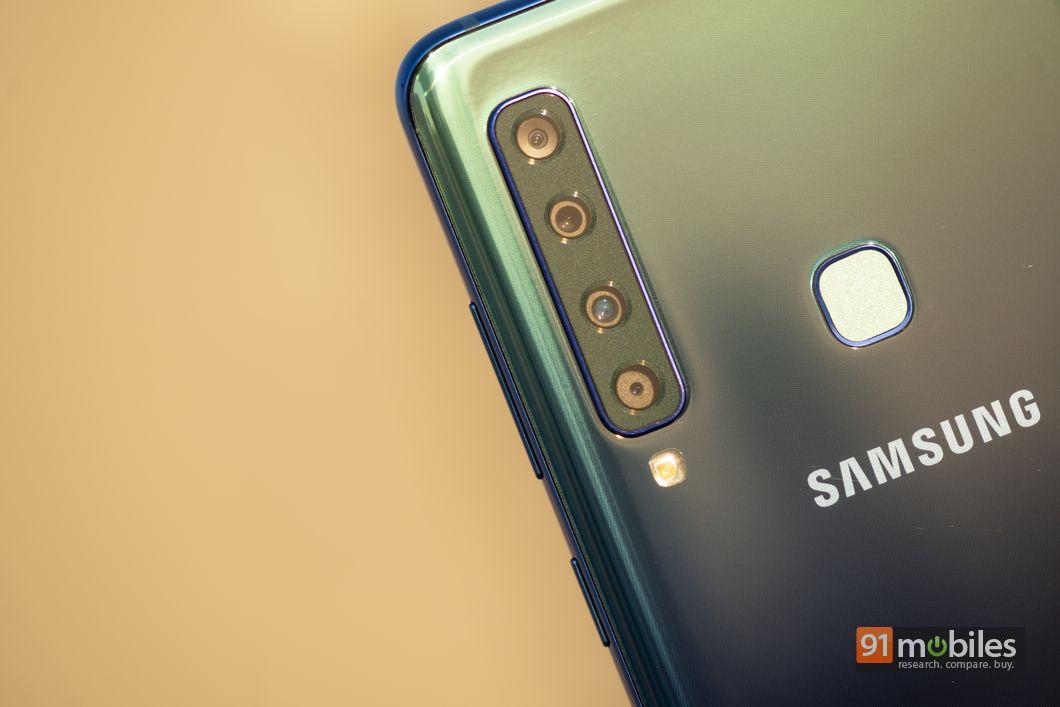 Let’s start with the main 24MP shooter, as I feel that it performed the best of the lot. Under ideal lighting scenarios, the Galaxy A9’s main sensor clicks vibrant photos with an ample amount of details. It’s quick to latch on to subjects and the nine times out of ten, I could get away with a quality picture without fiddling with the exposure. However, occasionally, you’ll have to manually control the exposure of the shot to control lens flaring, especially when the source of light is facing the sensor. I’d also like to point out that the smartphone’s built-in scene optimiser works well outdoors as it automatically calibrates the camera’s settings to give you the best possible result. However, I couldn’t get the optimiser to detect indoor scenes during my time with the device.

The wide-angle camera is quite possibly the worst of the bunch and simply put, is riddled with issues. For starters, every wide-angle shot I took with the device had a noticeable fisheye effect. Moreover, while the images look fine on the smartphone’s display, there were no details to be found upon zooming in. At night, the performance of the shooter takes a turn for the worse and you’d be better off taking a few steps back and capturing the scene with the 24MP shooter than relying on the wide-angle camera. The telephoto camera does a decent job of zooming into the subject but much like the wide-angle sensor, the images I clicked in that mode were lacking in detail. 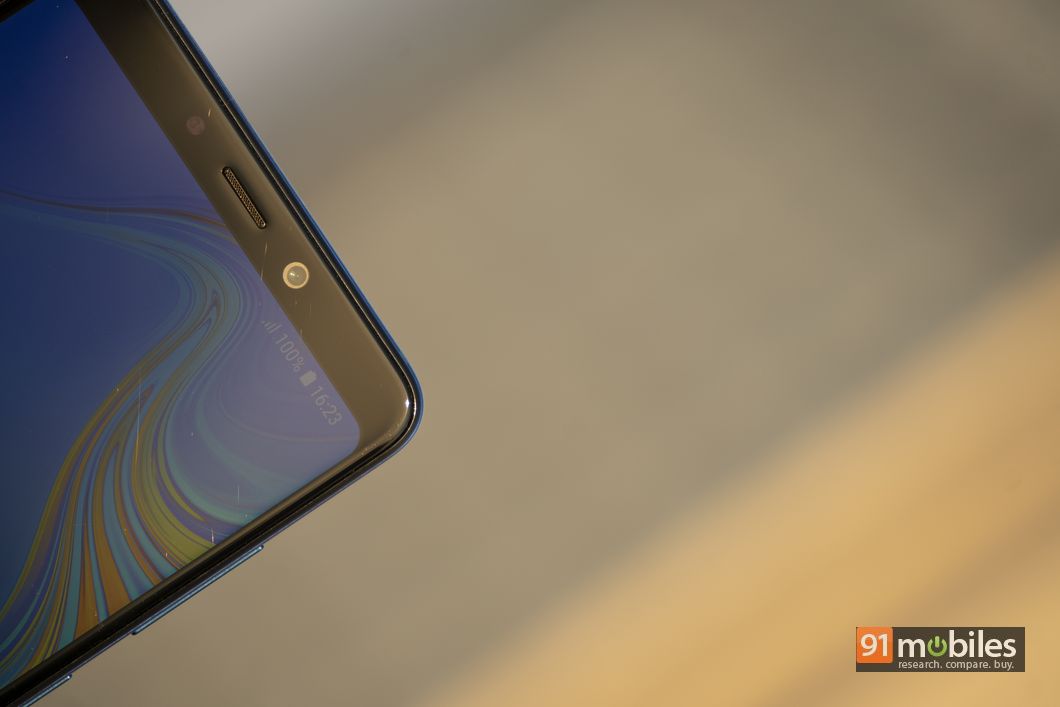 Coming to the portrait mode, despite shipping with a dedicated depth sensor, the Galaxy A9 struggled to differentiate the subject from the background. In numerous shots, I noticed that the blur effect kept infringing with the borders of the subject and oddly enough, the images I captured in this mode suffered from poor exposure issues too. On the bright side, I was quite pleased with the smartphone’s 24MP selfie-shooter which took stellar images. I would’ve liked if Samsung didn’t artificially beautify my skin tone but, I am confident that the handset’s selfie-shooter will find plenty of takers.

The Samsung Galaxy A9 retails for Rs 36,990 and for the price, offers a stunning design, a gorgeous display and good battery life. However, the handset’s price tag pits it against the OnePlus 6T (review) which even with two cameras short, clicks better pictures and is powered by the industry-leading silicon from Qualcomm. 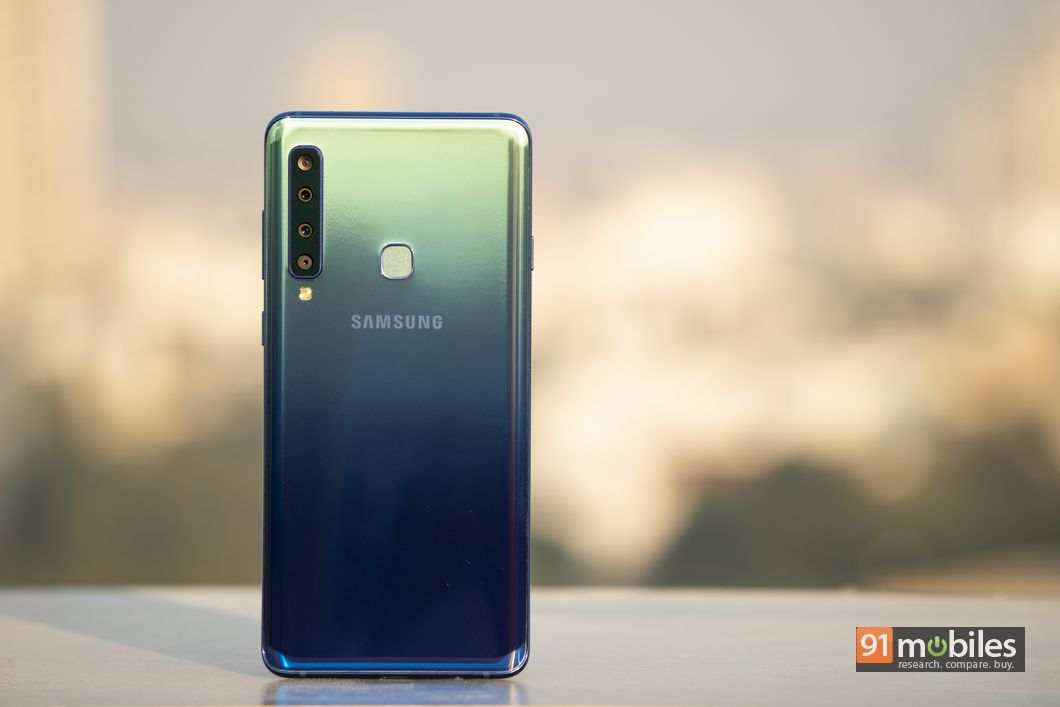 Consequently, while the Samsung Galaxy A9 would’ve been a stellar deal under Rs 30,000, it doesn’t do enough to justify its MRP. That said, I am glad Samsung is bringing innovative ideas to set its Galaxy A-series of smartphones apart and I am excited to see what the company cooks up next.