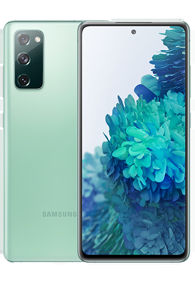 It’s no secret that Korean tech giant Samsung is among the busiest smartphone OEMs in the world – after all, fortifying its exhaustive portfolio with new devices every few months definitely takes some doing. That being said, of all the phones the company launched last year, two stood out to me, namely the Samsung Galaxy S10 Lite (review), and the Samsung Galaxy M51 (review). Why, you might be wondering? Well, unlike the rest of the phones in the company’s lineup, the aforementioned duo made use of Qualcomm processors. 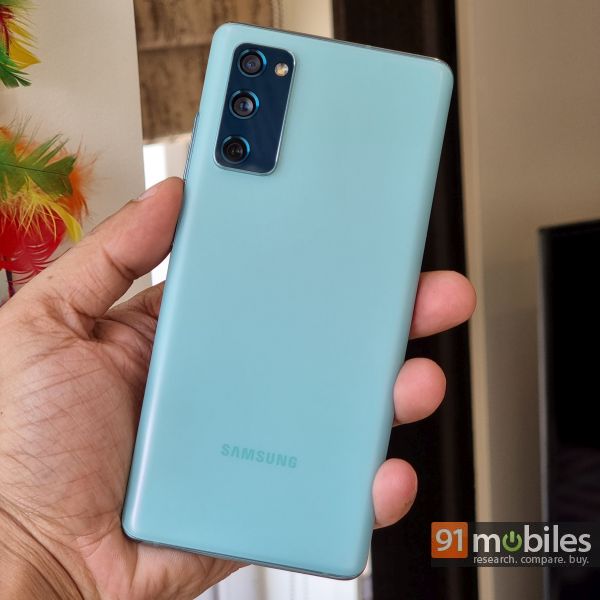 Now, don’t get me wrong – the company’s Exynos 2100 SoC is quite capable. The brand’s S20 FE (review) from last year shipped with the company’s Exynos 990 SoC in India, which does pack a fair bit of grunt as well. That said, many folks still prefer Qualcomm’s mobile chipsets. Fast-forward to 2021 and the company is taking another stab with the S20 FE, albeit offering the device with Qualcomm’s Snapdragon 865 processor this time around. So, should you take a second look at the ‘new’ S20 FE 5G, or stick to your guns and buy the OnePlus 9 (review) or the ASUS ROG Phone 5 (first impressions) instead? Allow me to answer that in this review.

Okay, before I proceed any further, allow me to address the elephant in the room – yes, the Samsung Galaxy S20 FE 5G is the same phone that debuted last year, just with a newer processor. Correspondingly, from the smartphone’s overall dimensions to its design and colourway as well as its cameras and software experience, the new S20 FE 5G will ‘feel’ the same as last year’s model. That being said, I absolutely loved the design of the original S20FE and therefore, have no qualms with the brand employing the same chassis yet again. The S20 FE 5G is among a dwindling breed of compact Android smartphones that instill confidence in a user’s mind when going case-less, or operating the phone with just one hand. Furthermore, the smartphone employs a glasstic back with a matte finish which admittedly, looks unappealing on a spec-sheet but in actuality, offers an exceptional in-hand feel and doesn’t attract as many fingerprints as its glossy counterparts either. Rest assured, the Samsung Galaxy S20 FE 5G is among the nicest phones I’ve held in my hands this year. 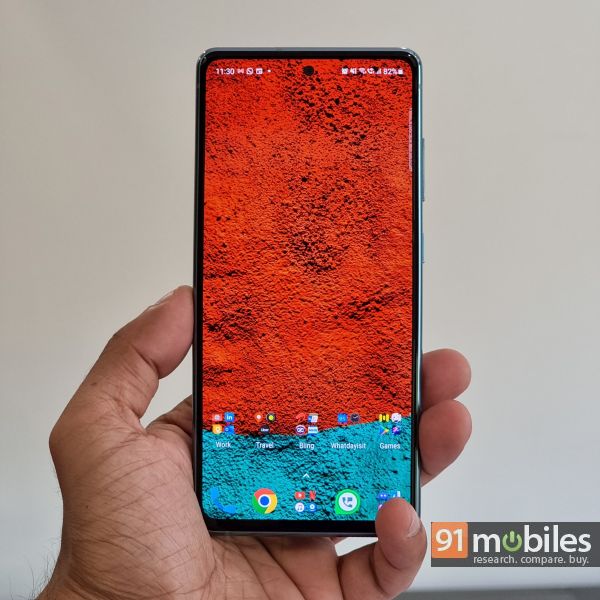 Now, despite positioning the smartphone in the flagship-killer category, the Samsung Galaxy S20 FE doesn’t forego all of the premium features of the Galaxy S-range and comes with support for wireless charging as well as IP68 certification, which should fend off damage should you drop the phone in a pool. The handset offers clicky buttons too, and I was more than satisfied with the audio quality from the dual front-firing speakers as well. As for biometrics, the handset’s facial recognition and fingerprint sensor worked admirably during my testing, so no complaints here either. All in all, the Samsung Galaxy S20 FE offers a gorgeous design that isn’t just more functional, but also more robust than the competition. 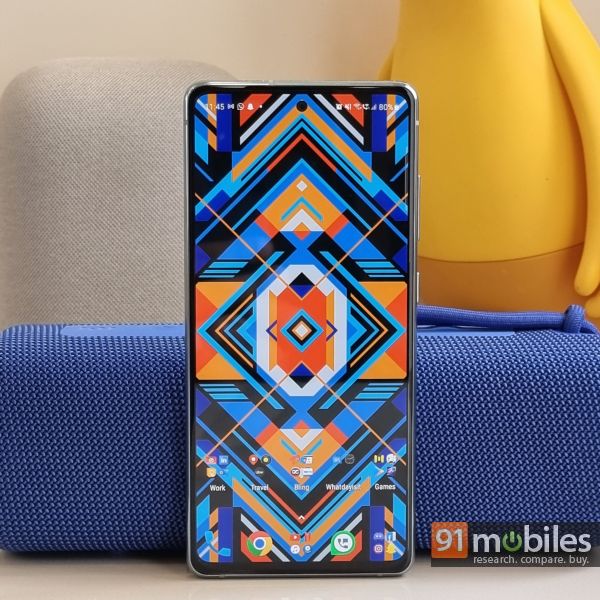 Coming to the display, the company has employed the same 6.5-inch Full HD+, Super AMOLED panel as seen on last year’s model. But, once again, I am all for it. Firstly, the display is of the flat variety and consequently, mitigates accidental touches greatly. What’s more, the panel gets sufficiently bright and offers a refresh rate of 120Hz, ensuring animations and UI transitions glide on the screen. Interestingly, unlike some OEMs, Samsung hasn’t locked the display refresh rate to 60Hz when using the phone’s default apps (gallery, etc). In fact, I used the phone with the DisplayChecker app relaying real-time refresh rate to my screen and I never saw the numbers dip below 120Hz. Lastly, the display offers good viewing angles, punchy colours and comes with WideVine L1 as well as HDR10 certification, meaning you will be able to stream your favourite shows at the highest possible quality. 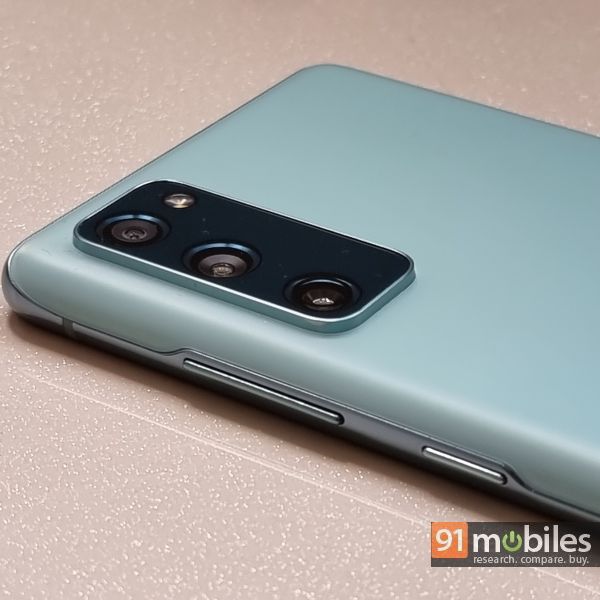 Now, coming from phones with much taller screens, I did struggle whilst playing games on the phone initially. But, the screen felt sufficiently accommodating once I’d spent a few hours with the phone. Speaking of which, in terms of performance, the Samsung Galaxy S20FE 5G feels like a different beast altogether. The smartphone is backed by Qualcomm’s Snapdragon 865 chipset that works alongside 128GB of built-in, non-expandable UFS 3.1 storage. For memory, the handset ships with 8GB of LPDDR4X RAM. Unsurprisingly, the S20 FE felt superbly snappy during my testing and the phone tackled multi-tasking really well too. At any given point, I’d have at least a dozen apps open and the smartphone could comfortably juggle between them. And, don’t worry – I did run a bunch of games on the phone too, including Genshin Impact and Call of Duty Mobile. Not only was I able to max out the graphics settings, but the smartphone’s temperature didn’t spike either. Clearly, the Samsung Galaxy S20 FE 5G’s performance is laudable and I wish the company would have launched the phone with the Qualcomm chip, to begin with. But, better late, than never, amirite? 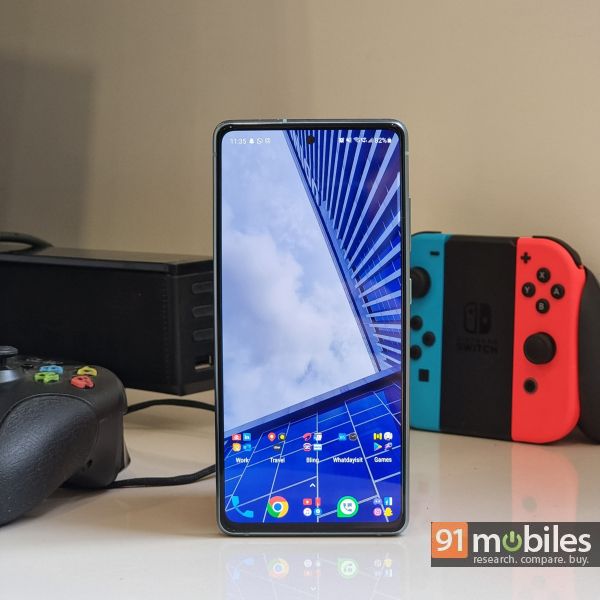 Software-wise, the Samsung Galaxy S20 FE 5G features the company’s OneUI v3.0 skin on top of Android 11. If this isn’t your first rodeo with OneUI, then you’ll know exactly what to expect here – oodles of customisation features, a bevy of cool utilities like Knox secure folder, and, unfortunately, a ton of bloatware too. That said, most of the pre-installed apps can be uninstalled or put to deep sleep so they don’t take up any of the phone’s resources, which is great. My only qualm with the custom skin is that it doesn’t allow buyers to use third-party icon packs. Thankfully, OneUI does more right than wrong and as of late, has become one of the most frequently updated custom skins on Android too. I am all praise for the smartphone’s battery life as well and despite shipping with a modest 4,500mAh cell, the Samsung Galaxy S20 FE comfortably saw me through the end of a heavy workday. In fact, I was averaging close to 5.5 hours of screen on time with the phone, and that’s with the display set to refresh at 120Hz. Unfortunately, the company still bundles a 15W brick with the phone however, the smartphone does support 25W fast-charging as well as wireless charging, so you can use a compatible charger to juice up the phone relatively quicker. 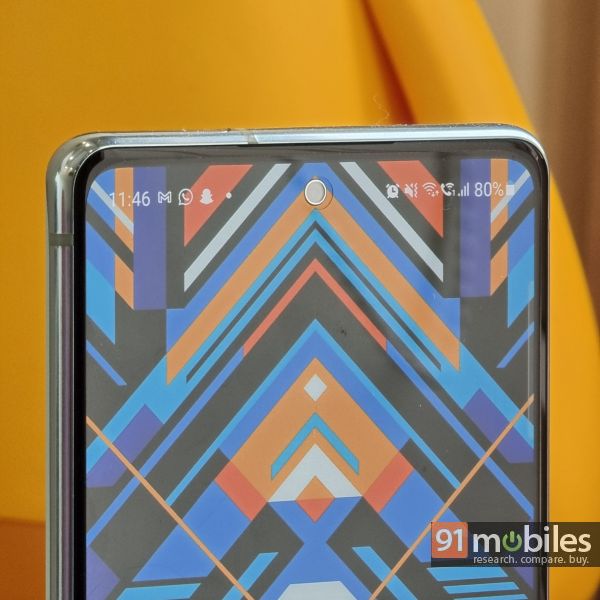 As for optics, well, the Samsung Galaxy S20FE 5G makes use of the same sensors as found on its predecessor. To that note, the smartphone ships with a 12MP main sensor, a 12MP ultra-wide angle lens, and an 8MP Telephoto lens. For selfies, the smartphone comes equipped with a 32MP main sensor.

So, is the smartphone any good? And, how does it stack up against the Hasselblad-backed OnePlus 9? Well, while you will have to wait a bit for my camera comparison between the S20 FE 5G and the OnePlus 9, initial results sway in the favour of Samsung’s offering immensely. The Galaxy S20 FE 5G clicks gorgeous photos from its main sensor that are flush with good details and pleasing albeit slightly saturated colours. The images clicked by the phone offer ample dynamic range too and rest assured, you will seldom be disappointed with the handset’s prowess in daylight scenarios. I was just as impressed with the smartphone’s cameras in lowlight situations as well. Images shot without the company’s night mode retained a good amount of details however, with the feature enabled, I witnessed noticeable improvements in the composition including lesser lens flaring and reduced noise levels. Unfortunately, that’s more than I can say for the images shot from the wide-angle lens, which do add a broader perspective to the frame, albeit have lackluster corner details. The telephoto shooter, on the other hand, clicks sharp and detailed images at 3x zoom, but if you’re willing to compromise on the quality, then you can dial up the zoom up to 30x too. As for selfies, the smartphone’s 32MP shooter didn’t discourage me from using Snapchat and Instagram in the slightest, and the sensor captured selfies with remarkable details.

So, for its asking price of Rs 47,999, should you opt for the Samsung Galaxy S20 FE 5G? Absolutely. In my books, the S20 FE 5G packs immense value and is a more well-rounded offering compared to the OnePlus 9 and ASUS ROG Phone 5 too. While you will miss out on uber-fast charging speeds and the latest Snapdragon processor, the S20 FE 5G’s Snapdragon 865 chip is still rapid and the smartphone’s robust, weather-proof chassis more than make up for its slow top-up speeds. Not to mention, the Samsung Galaxy S20 FE 5G offers a more balanced camera setup too (thanks to its dedicated telephoto lens), and rest assured, is among the best phones from the company’s stables I’ve used to date.