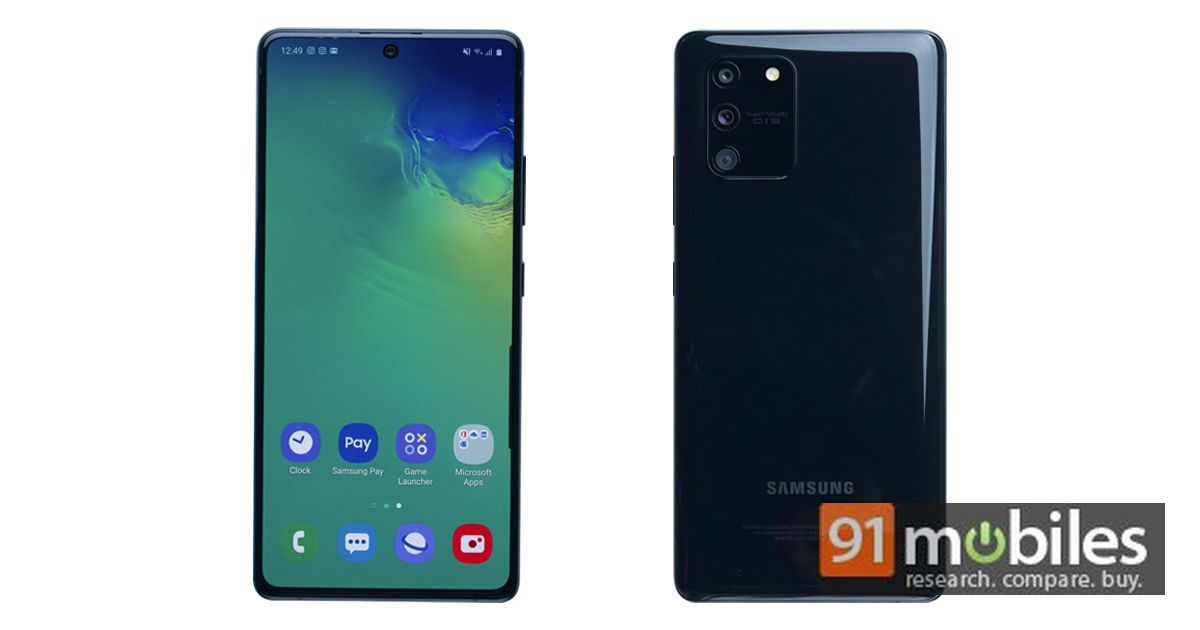 Samsung has never been one to take things slow and steady. The company is all about flooding the market with its smartphones so that consumers have the choice of picking a Samsung phone over others in every price segment. Indeed, Samsung doesn’t mind if one phone overlaps another. It’s a win-win situation for the company after all. The most recent example of this is the newly-launched Samsung Galaxy S10 Lite. The phone is a part of the flagship Galaxy S series, but is priced so competitively, you’d think it was a Galaxy A series smartphone.

The Samsung Galaxy S10 Lite is a new strategy by the company. The smartphone offers some of the most high-end specifications of 2019, including a Snapdragon 855 SoC, 8GB RAM, punch-hole AMOLED display and 48MP triple camera setup with a new Super Steady OIS feature; and pairs them with an affordable price tag of Rs 39,999. This puts the Samsung Galaxy S10 Lite squarely in the territory of the OnePlus 7T (Review), OPPO Reno 10x Zoom (Review) and ASUS ROG Phone 2 (Review), which is a segment that Samsung was missing out on for a while. 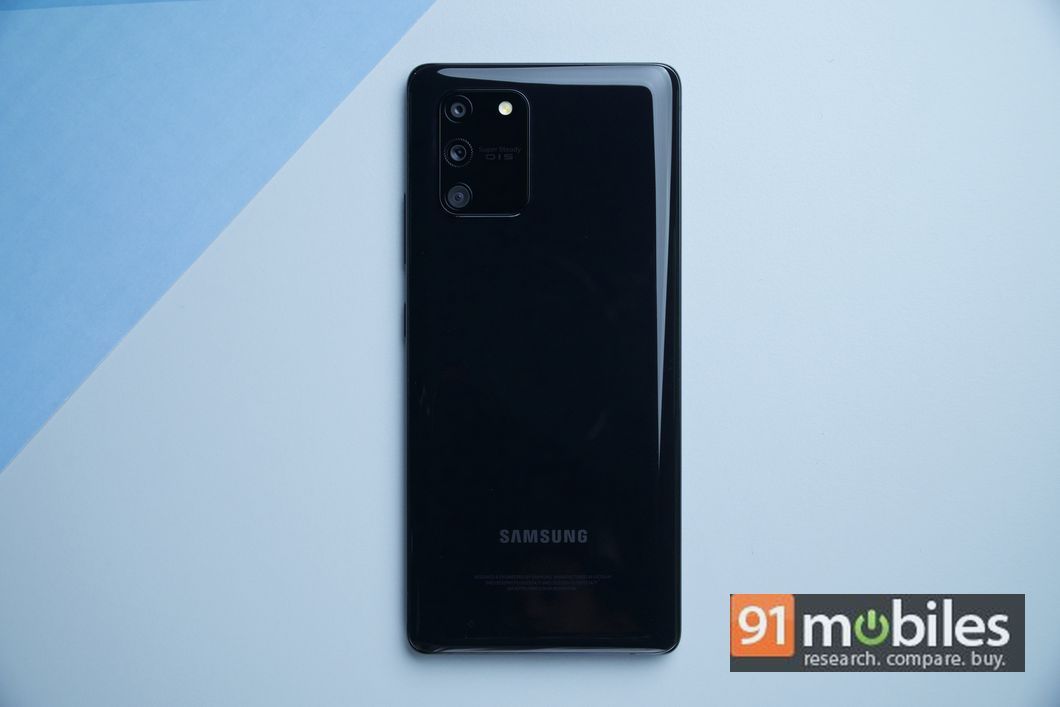 The reason why we say the Samsung Galaxy S10 Lite feels like it should be part of the Galaxy A-series is due to its design. For a phone that wants to be part of the high-end Galaxy S series, it doesn’t feel as premium. Samsung has clearly cut some corners here to bring the price of the Galaxy S10 Lite down. The curved rear panel is made of a glasstic finish rather than glass, and doesn’t feel as premium, relatively speaking.

The Galaxy S10 Lite comes in Prism White, Prism Black and Prism Blue colours. The unit we received for review was in black, which looks simple and classy. The glossy finish means smudges are more visible, especially on the black model. The frame is black as well and feels quite solid. The Galaxy S10 Lite is a tall phone, so it won’t be easy to reach the top edge of the screen with one hand. At 186 grams, the Galaxy S10 Lite feels light in the hand. The power button and volume controls on the side have a sweet tactile feel. There’s a Type-C port and speaker grille on the bottom. Unfortunately, the Galaxy S10 Lite does not get a headphone jack. 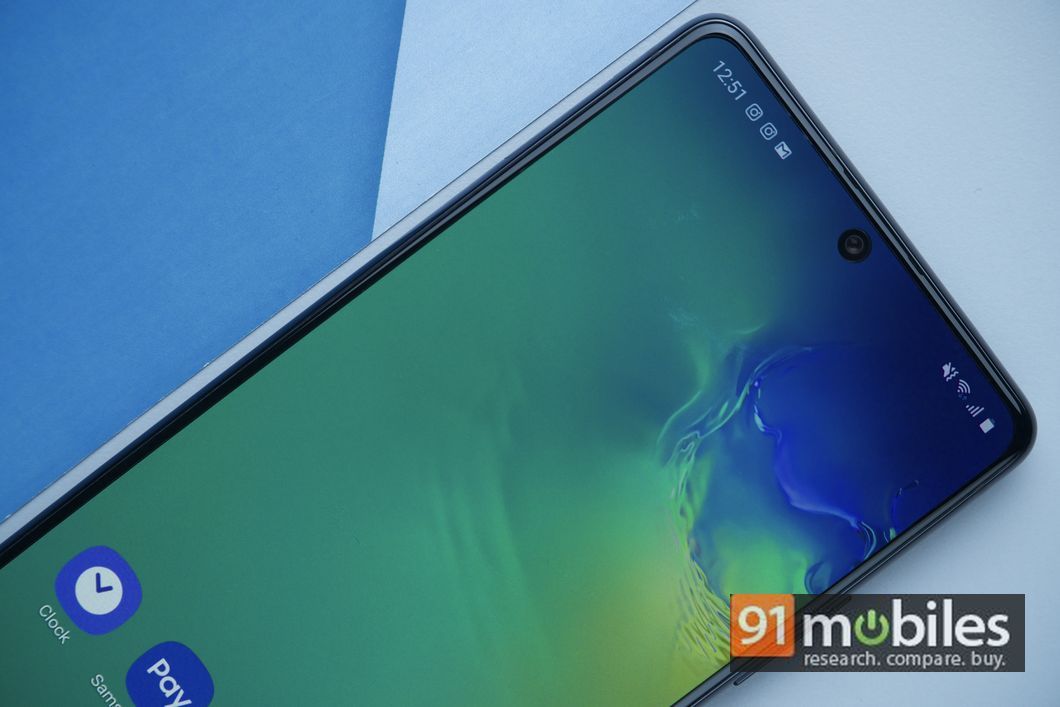 Talking about the front, the Samsung Galaxy S10 Lite offers a stunningly big 6.7-inch FHD+ (2,400 x 1,080) Super AMOLED display. It’s a tall display with slim bezels all around including a pretty thin chin. The Infinity-O display means you get a punch-hole cutout on the top centre of the screen. The hole is easy to ignore on a screen this big. While you might notice it while browsing the UI, you’ll forget about while watching videos or playing games.

Why pay in full when you get EMIs with 0% interest?
Buy the Samsung Galaxy S10 Lite now and pay later in flexible EMIs!
Know More

Speaking of which, the Samsung Galaxy S10 Lite’s display is terrific for entertainment. The screen is bright and vivid with excellent viewing angles. Colours look punchy and blacks are deep and look great when you enable system-wide dark mode. With Widevine L1 certification and HDR+ support, you can stream content on Netflix and Prime Video in sharp HD resolution.

The 48MP triple camera setup is similar to what you find on some Galaxy A series phones, but it works on the Galaxy S10 Lite. The combination of a 48MP f/2.0 Sony IMX586 high-resolution main sensor, a 12MP f/2.2 wide-angle lens and a 5MP macro lens offers a good variety of shooting modes. One of the biggest new features that Samsung is highlighting is the Super Steady OIS, which gives the main camera a gimbal-like stabilisation, allowing for extremely steady videos and practically shake-free stills.

Super Steady OIS moves the camera lens up, down, left and right, offering a wider correctional range than typical OIS. It definitely makes videos look smooth and shake-free when shooting handheld and enabling Super Steady mode, but it’s no better than the Galaxy S10+ or iPhone XR. You can also record videos up to 4K UHD.

Still photography in daylight is excellent. The main camera is able to capture crisp, noise-free photos that look bright, colourful (quite saturated at times) and attractive on the OLED display. The wide-angle lens is handy and sharp enough, but colours tend to look slightly warmer compared to the main camera. Meanwhile, the macro lens, which is hidden away in the ‘More’ option, can let you capture a subject as close as 3cm. This macro camera should only be used in daylight and we managed to take some really good macros of flowers and small objects.

The wide-angle and macro cameras struggle in low-light and should be avoided. The main camera’s f/2.0 aperture allows a good amount of light in. Without Night Mode, photos captured using the main camera will be noisy. But the the Super Steady OIS helps quite a bit in keeping the subject in focus. The Night Mode feature does reduce noise levels, but we expected better low-light results from it. 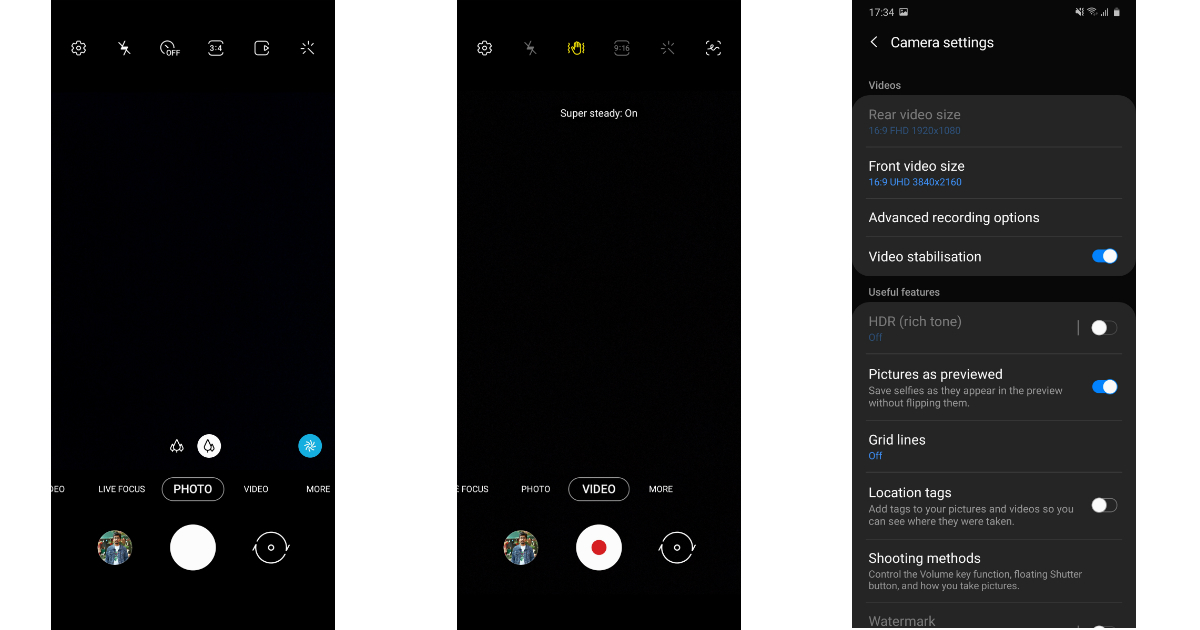 Additional camera features include Live Focus, which lets you adjust the depth of field in real-time. Bokeh shots in daylight look good as you get a pleasing background blur effect and good subject separation. You can also change the shape of the blur with options like Big Circle, Spin, Zoom etc. Live Focus also works in video mode for both the rear and selfie camera.

The 32MP front camera can take some really crisp and attractive selfies. We were satisfied with the colour reproduction and clarity when capturing selfies during daytime or indoors under bright light. In low-light conditions, selfies come out softer and noisier. The night mode works for the front camera as well, but don’t expect a drastic improvement in picture quality. 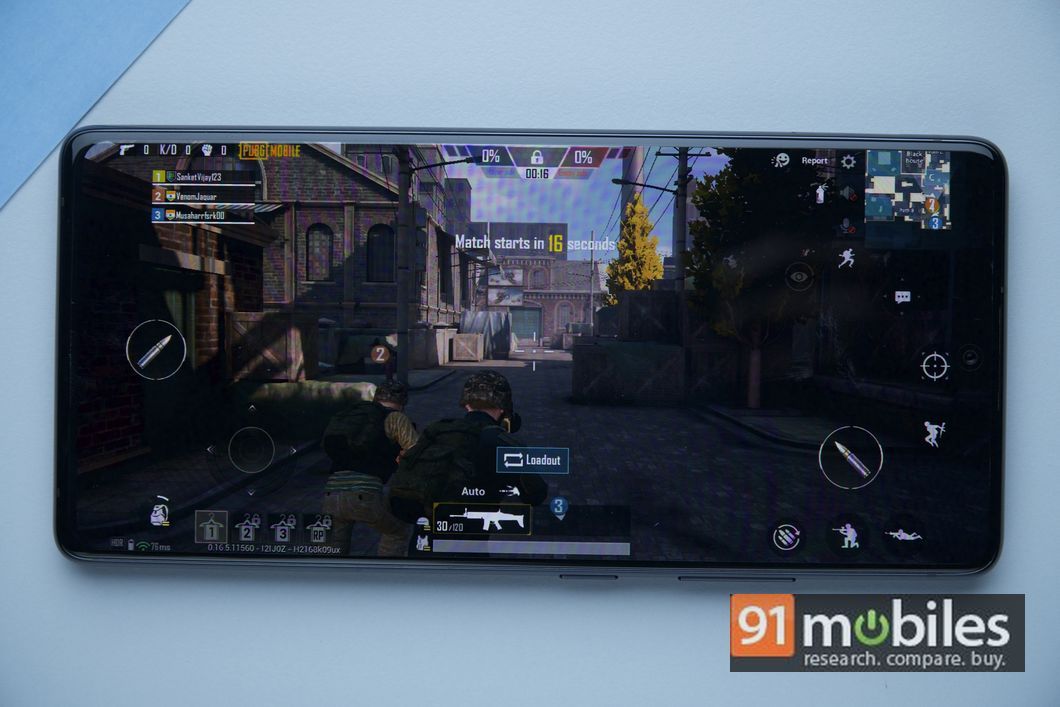 No surprises that the Samsung Galaxy S10 Lite breezes through graphically-intensive games like PUBG and CoD Mobile. We played a few sessions of PUBG in extreme graphics with HDR setting and saw no drops in frame rates or any choppiness during gameplay. The phone did get warm in maxed out settings, but that was expected. Battery drain during gameplay was minimal, which is great.

Day-to-day usage on the Samsung Galaxy S10 Lite was smooth and lag-free. The phone ships with Android 10 with One UI 2.0 on top, which offers a clean and optimised UI. Apps open quickly and fluidly and the phone comes with little to no bloatware. One UI brings some useful features like one-handed user interface, easy gesture-based navigation and system-wide dark mode, Always On display, Dynamic Lock screen and so on. 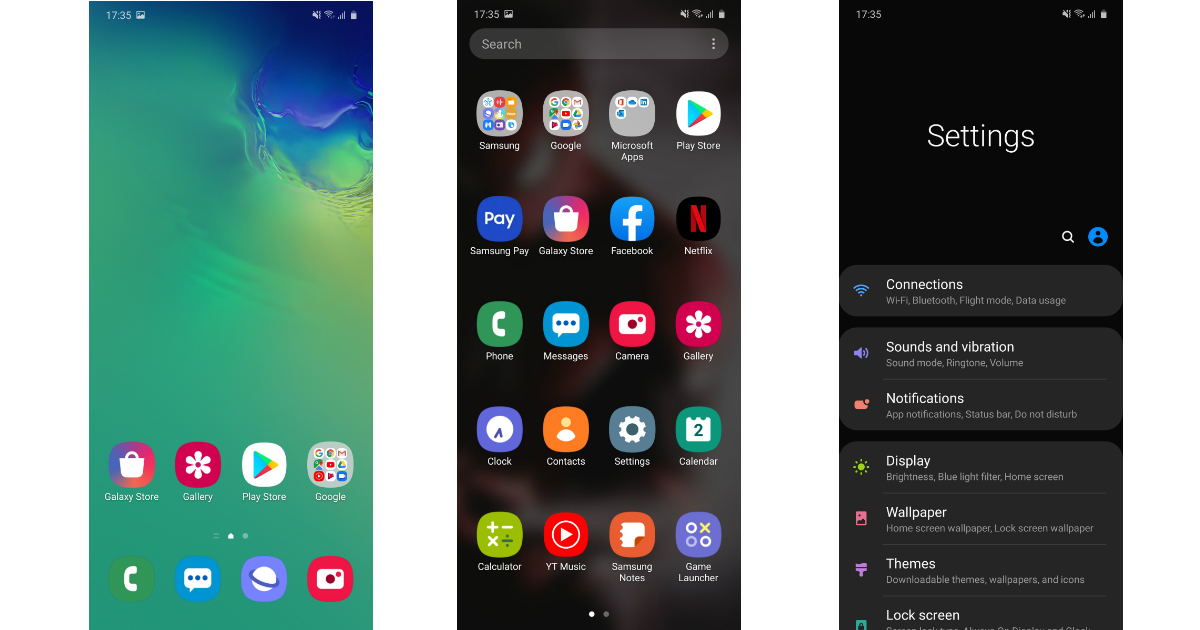 The in-display fingerprint sensor continues to remain sluggish compared to what you find on the OnePlus 7T or phones from OPPO, Realme and other rival brands. Same goes with face unlock as it doesn’t instantly take you to the home screen. The lack of dust and water resistance also makes the phone feel less premium than the Galaxy S10 and Galaxy S10+. The Samsung Galaxy S10 Lite lacks stereo speakers as well, so you only get a single bottom-firing speaker that is loud, but doesn’t offer great clarity or depth. As for call quality, we did not experience any major drops during calls or connectivity issues with the smartphone.

The Samsung Galaxy S10 Lite houses a 4,500mAh battery, which is noticeably bigger than the battery inside the Galaxy S10 and Galaxy S10+. The bigger battery is definitely welcomed here and it helps the Galaxy S10 Lite deliver a pretty solid full day to a day and a half of battery life on a single charge. During my week-long testing, we threw pretty much everything at the Galaxy S10 Lite. From hours of gaming to video streaming and social media browsing on a daily basis, the phone consistently managed to last a full day and then some. 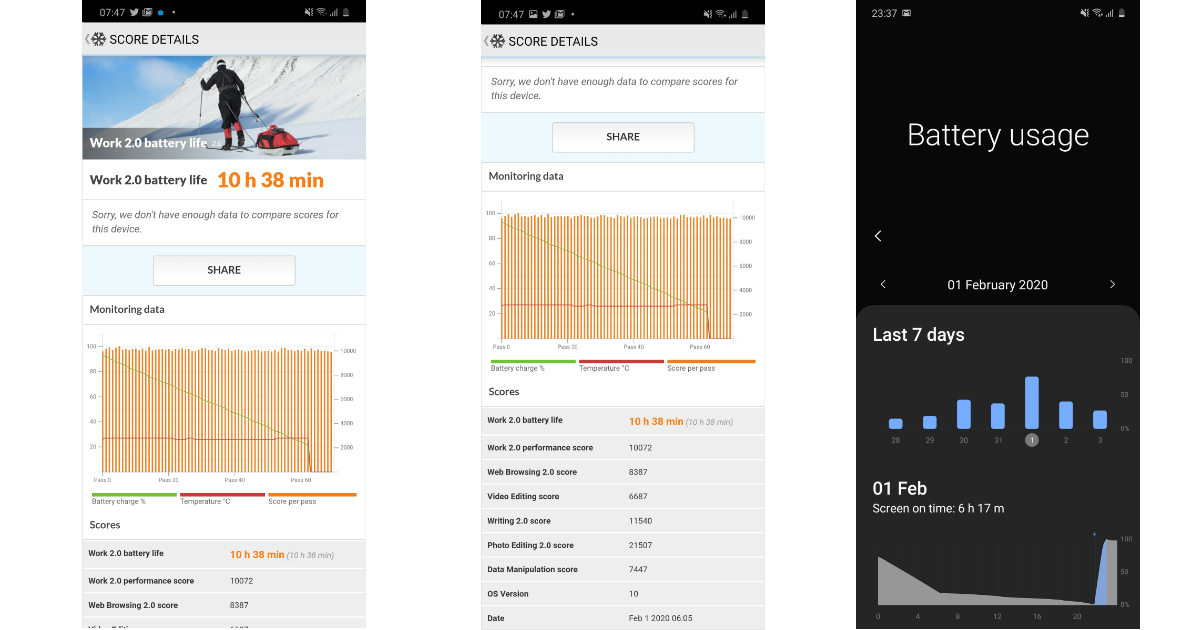 Standby battery drain was minimal thanks to a power efficient 7nm processor at its core. In our PCMark battery drain test, the Galaxy S10 Lite lasted roughly 10 hours and 40 minutes. The phone ships with a 25W fast charger that will juice up the phone from zero to 100 percent in about 90 minutes. 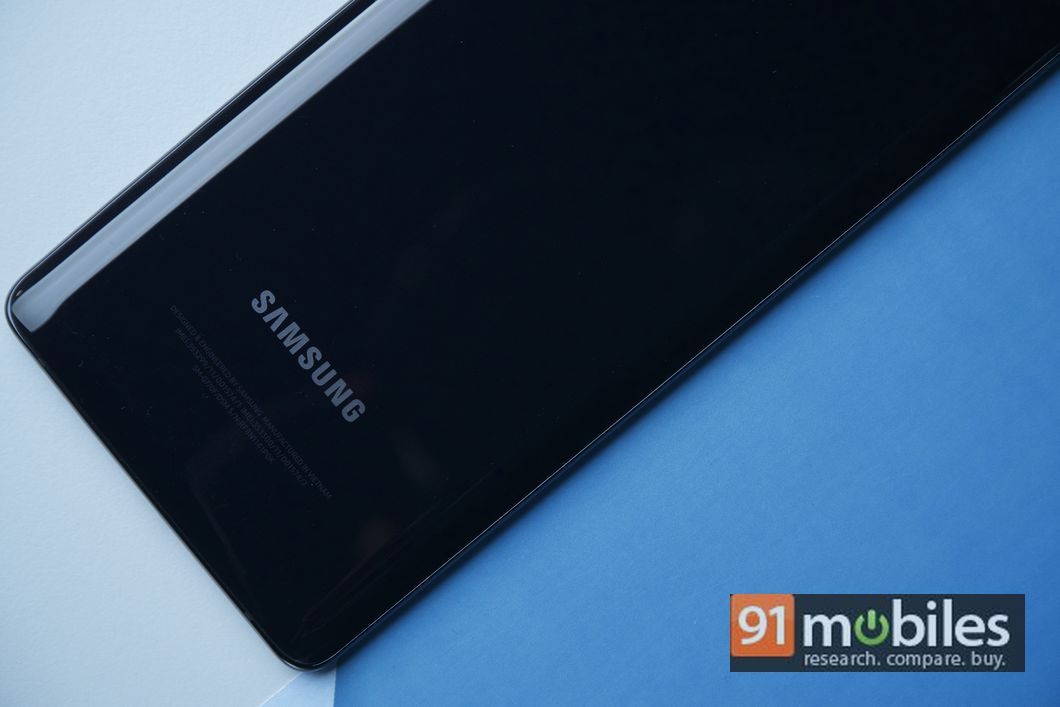 Some people might think Samsung is late to the party with the Galaxy S10 Lite, but we think it doesn’t matter because the phone gets so many things right. The biggest feature in its favour is the Snapdragon 855 SoC, which many fans in India have wanted to see in a flagship Samsung phone. The processor, paired with plenty of RAM and storage, makes the phone consistently fast, smooth and reliable no matter what you throw at it. Under the hood, the Galaxy S10 Lite feels like a flagship phone. But the plastic build quality and lack of wireless charging and water resistance makes it look like a typical Galaxy A series smartphone rather than a flagship device.

With a flagship-grade display and performance, a solid day-long battery life and an impressive triple camera setup, the Galaxy S10 Lite is a worthy challenger to the OnePlus 7T. The few aspects where we feel the OnePlus 7T does better is the smooth 90Hz screen refresh rate and premium glass design. But if these can be ignored, the Galaxy S10 Lite makes for a compelling Android flagship phone and is worth spending on if you have a budget of Rs 40,000.