Once hailed as the next big thing, the glory days of tablets are now behind us, thanks to the popularity of the so-called phablets, followed by the rise of large-screened bezel-less smartphones. And whwn a tablet costs as much as a basic laptop, things become even trickier. Can Samsung’s latest Galaxy Tab S5e carve a niche for itself in such a scenario? Let’s find out in this FAQs-styled review. 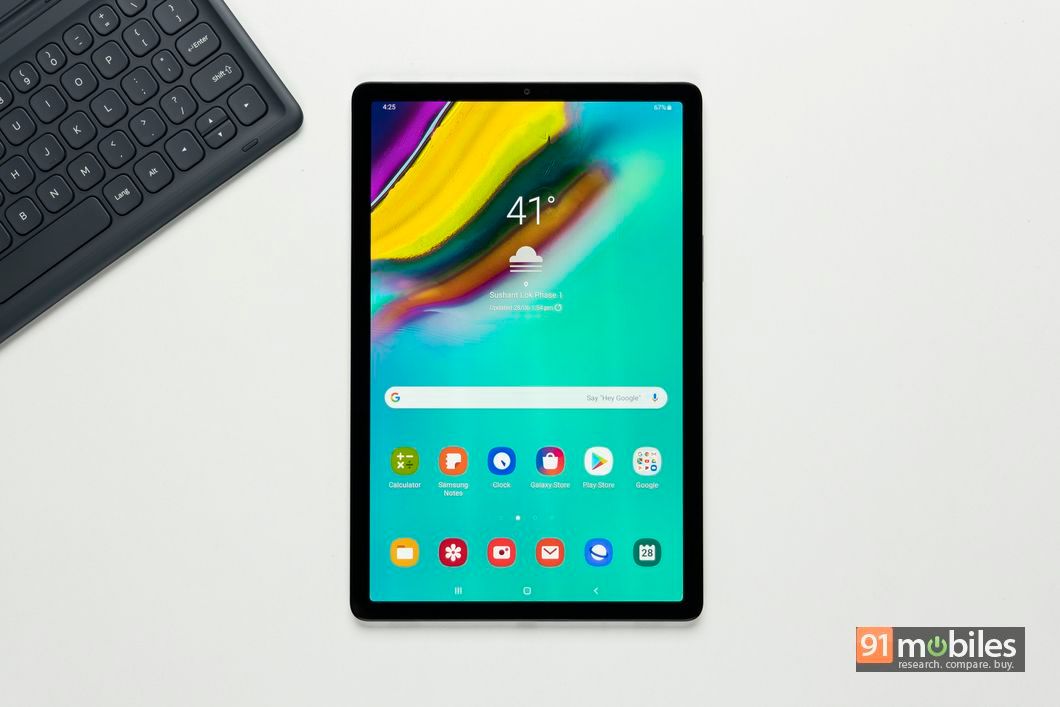 The Tab S5e is a mid-range Android tablet designed for entertainment and productivity on the go. Key specs include a 10.5-inch Super AMOLED display with a resolution of 2,560 x 1,600 pixels, Snapdragon 670 SoC with 4 gigs of RAM, 64GB native storage along with an option to add another 512GB via microSD, a 13MP camera at the rear along with an 8MP snapper up front, and a 7,040mAh battery with fast charge support. There are no other models in terms of RAM or storage, but you can buy the slate in Wi-Fi only or Wi-Fi + LTE variants. Colour choices include gold, silver and black.

What’s the design and build quality like? What about the display?

The metal-clad slate looks extremely premium, and at 5.5mm, is pretty much the slimmest tablet you can lay your hands on. The only protrusion is the camera bump at the rear (apart from the volume rocker). If you hold the slate in vertical orientation, you’ll find the volume rocker on the right spine, along with a power key that sits flush with the chassis. Worth noting that this key also integrates a fingerprint scanner.

On top are two AKG-tuned speakers, with another pair on the bottom, placed on either side of the USB Type-C port. On the centre of the left spine are connector holes for the optional keyboard cover accessory. Samsung hasn’t found room to include a 3.5mm headset jack, but you do get a Type-C to 3.5mm dongle in the box. 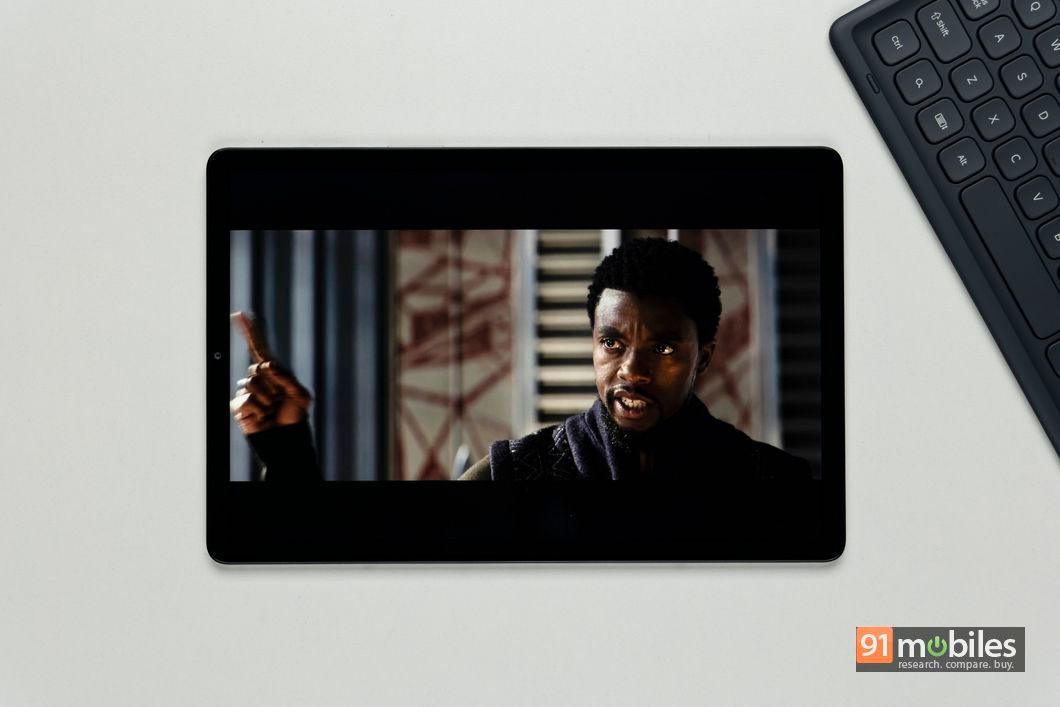 Coming to the display, the 2K resolution Super AMOLED panel is brilliant, as can be expected from Samsung. Combined with the quad speaker array, the Tab S5e makes for an excellent device for binge watching. Now your experience with different video apps might vary, since YouTube doesn’t allow you to zoom in, while apps like Netflix do, filling up the screen fully but cropping the view in the process. You can still choose to view the videos with black bars on top and bottom though. All said and done, the colours are punchy and the brightness levels great. And with those four speakers pumping out rich and loud sound, you probably won’t feel the need to use headphones, at least if you’re using the slate in quiet environs like your bedroom. 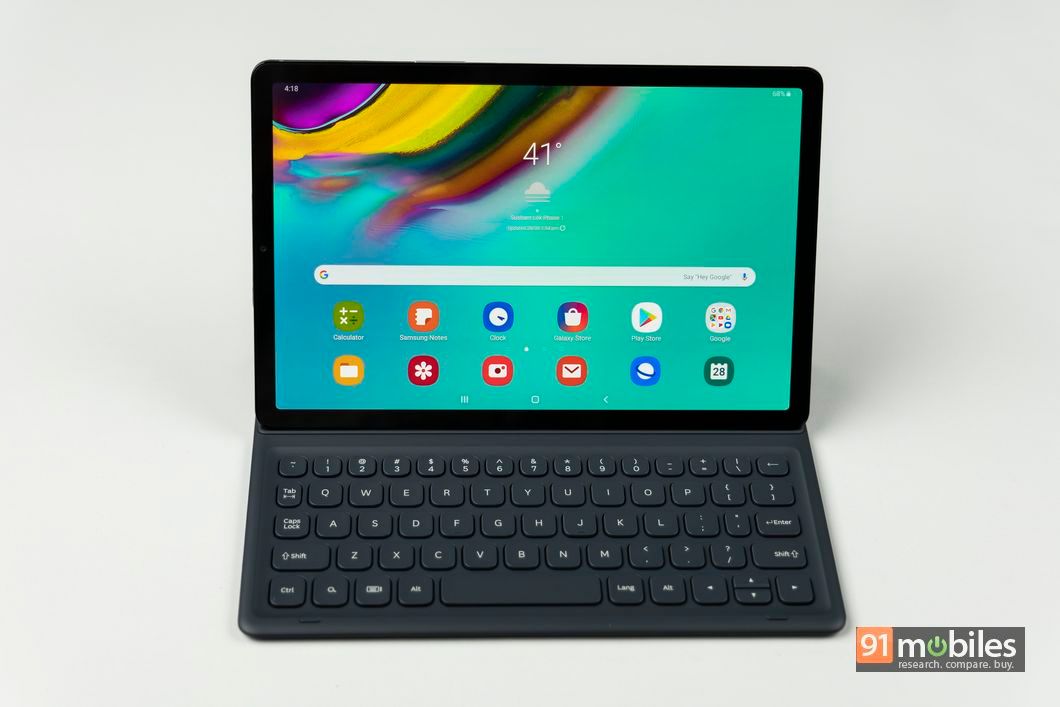 While we’re on the subject of design, it’d be apt to mention the keyboard book cover. This accessory is optional, but it does make sense to get one if you’re buying the Tab S5e, especially if you want to put the slate to some productive use. The grey cover is sleek, and gives the slate an elegant, business-y look. Apart from protecting the screen, the cover opens up to reveal a QWERTY keyboard you can use to type on, and offers a kickstand to let you prop up the tablet for convenient usage. The keyboard is a tad cramped, as you might expect, and it can take a while to get used to it. There are a few niggles with the keyboard though. For one, the edge of the cover obstructs the usage of the fingerprint scanner slightly (though you do have an option of just using face unlock for authentication to get around this). Secondly, if you want to do some serious typing, you need to have a stable surface (such as a desk) to place the device on. Typing in a moving vehicle, with the slate on your lap, is a tad inconvenient. Thirdly, the keyboard cover doesn’t put the tablet to sleep when closed, or awaken it when opened.

On the face of it, the Tab S5e runs Android Pie with Samsung’s One UI. Accordingly, you can expect the usual signature features, including Bixby support, a system-wide dark mode (called Night Mode) that looks fab on the AMOLED display, the option of choosing between adaptive, different screen modes for colour reproduction, and the standard set of preloaded apps from Samsung, Google and Microsoft. 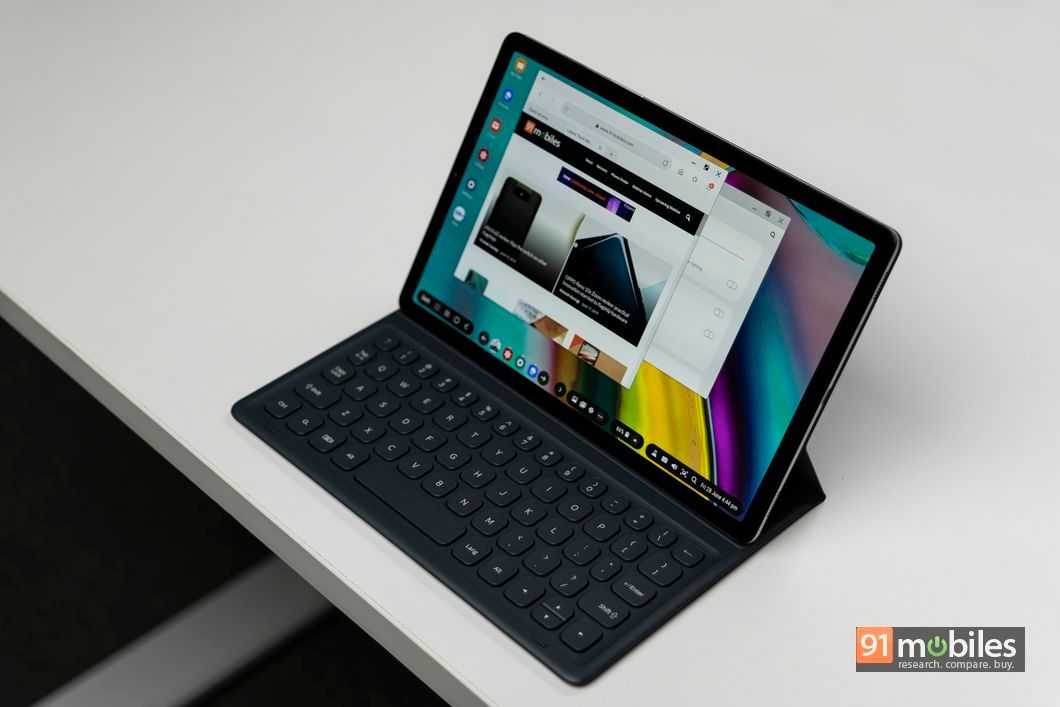 However, the magic happens when you switch to the built-in DeX mode. Accessible with a single tap via quick settings, the DeX mode switches the interface to a desktop-like view, and allows you to use the slate as a mini laptop. You can choose to let the device switch to DeX mode automatically when the keyboard cover accessory is connected, or when the tablet is connected via HDMI to a large-screen display. With DeX mode, you get the ability to open multiple apps simultaneously, and that too as resizable windows, just like a regular laptop. And this is where the keyboard accessory can come in really handy. However, you should still note that the 10.5-inch screen can feel a little restrictive in terms of size for multitasking in this way, so you can’t expect your usage experience to match that of a conventional laptop. And since the base is Android and not a proper laptop-grade OS, the usual set of limitations (and advantages) apply.

How’s the performance and battery life?

With its mid-range specs, the Tab S5e is by no means a performance-oriented device. It shines as far as the usual activities like video watching, streaming and productivity-based tasks are concerned, but it isn’t intended for heavy-duty stuff like intensive gaming. That said, games like PUBG and Asphalt 9 play reasonably smoothly, and look great on the large AMOLED screen too. However, when you switch to DeX mode and open a bunch of apps in multiple windows, the 4GB RAM seems a tad low. 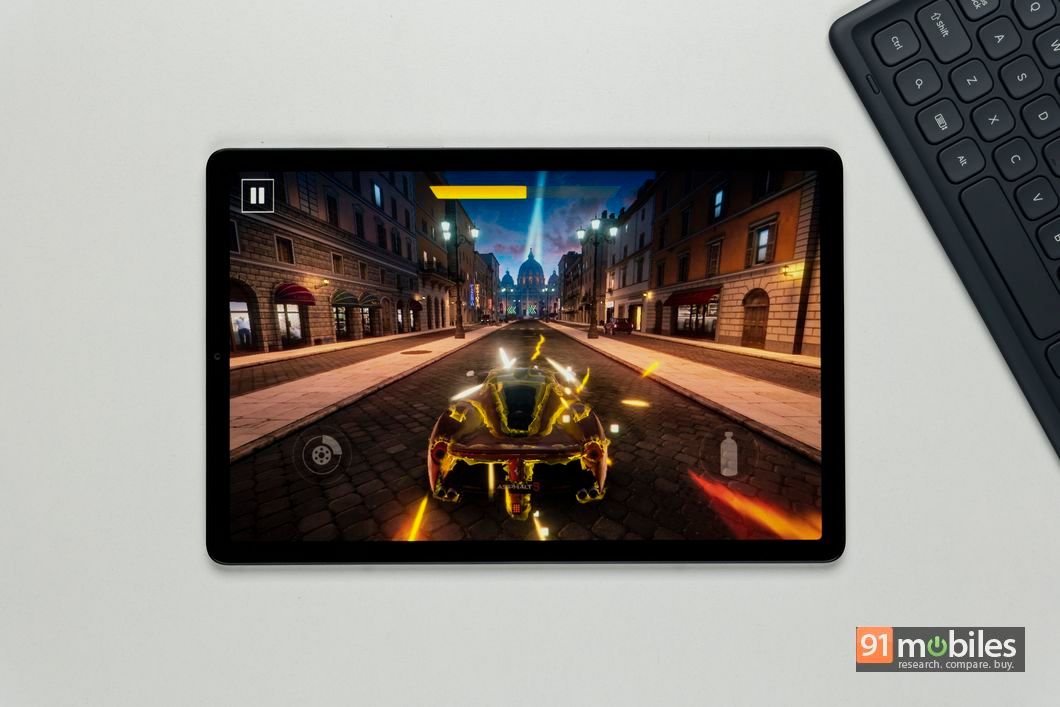 Coming to the cameras, the 13MP rear does its job. We don’t really expect you to use the tablet for serious photography, but you should know that the camera can take decent pics in daylight, but low light is a different matter altogether. Similarly, the 8MP snapper at front can’t be expected to handle selfie duties, but does the job in a crunch. It’s more useful for video calls, for which it does the job as long as there’s enough ambient light.

The 7,040 battery can easily last a day with medium usage, and even more if your usage is low. We typically ended up needing a charge after a day and a half, but your mileage could vary depending upon usage. Fast charger is supported, and using the bundled charger, you can juice up the device fully in a little over two hours.

How much does the Tab S5e cost?

Is it worth a buy? 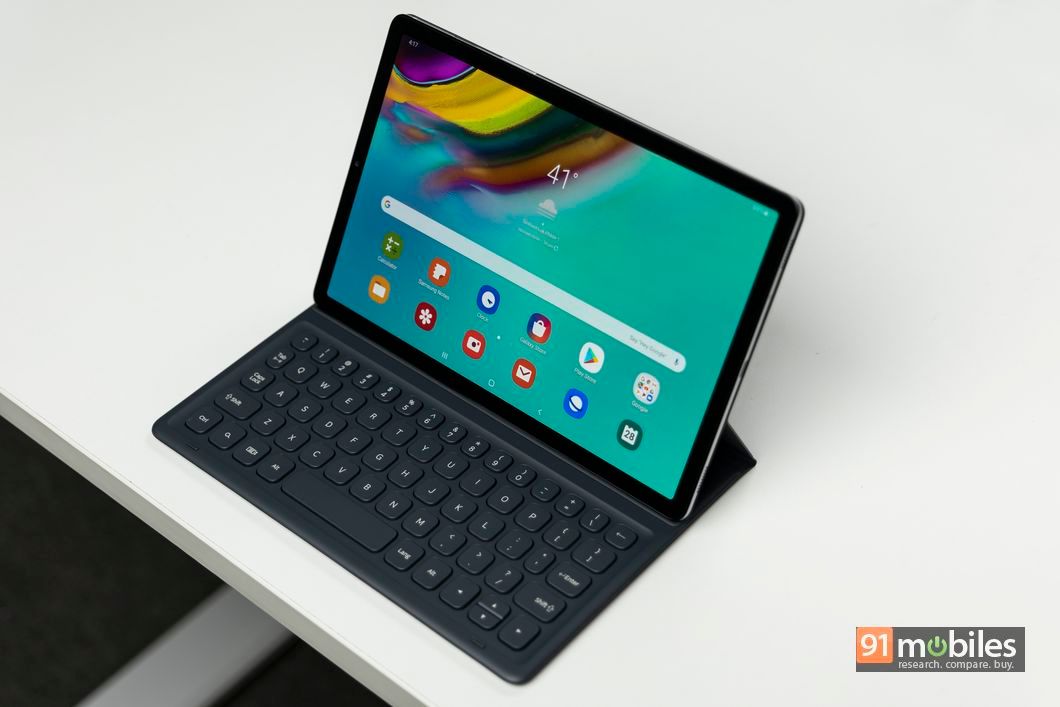 Hmm, that’s a tricky one. The truth is, tablets may not appeal to everyone, considering most phones these days have reasonably large screens, and those who need a portable device for some serious mobile computing would use a laptop anyway. While the Galaxy Tab S5e looks and functions almost like a mini laptop (with its DeX mode on and the keyboard cover attached), it can’t act as a proper replacement. However, if you need a mobile device that can give you a good binge watching experience regardless of where you are, or an easy-to-carry device that allows you to catch up on work while travelling, the Galaxy Tab S5e fits the bill well.