Samsung forayed into the foldable segment in 2019 and since then, the Galaxy Z Fold and the Galaxy Z Flip range of devices have been an integral part of the company’s flagship lineup. Clearly, the Korean giant is banking big on its foldables, which are often seen in the same sentence as the future of mainstream smartphones. Be that as it may, the company’s devices still have ways to go. In fact, last year’s Galaxy Z Flip3 (review) was far from perfect and the device left users wanting more in the camera and battery department. 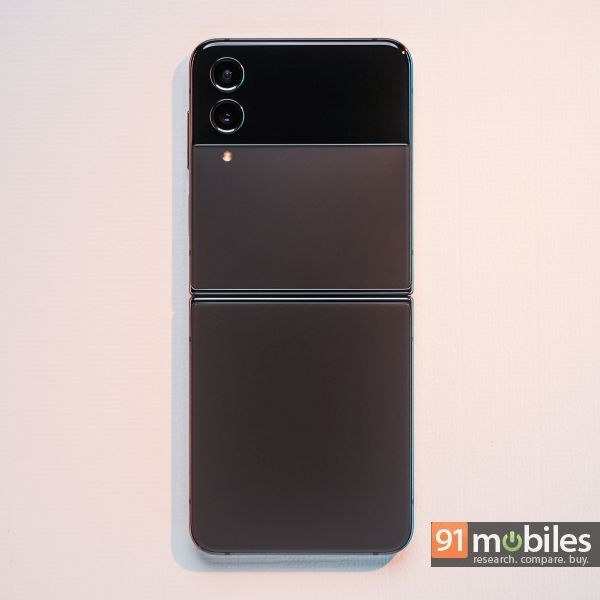 Enter, the Galaxy Z Flip4, which brings a host of improvements under the hood in hopes of righting at least some of its predecessor’s wrongs. So, let’s take a closer look at the phone to see if it is worth the hype, or not.

I won’t beat around the bush at all – the Galaxy Z Flip4 looks eerily similar to its predecessor, the Galaxy Z Flip3. In fact, barring the new colourways, you’ll be hard-pressed to tell any differences in the design across the two models. That’s not to say that the Flip4 is a carbon copy of its aging sibling, though. In fact, Samsung has flattened the edges of the phone, thereby facilitating a more secure in-hand grip. Furthermore, the device is a tad shorter this time around albeit weighs more at 187 grams too, which can be accredited to the handset’s beefier 3,700mAh cell. Suffice it to say, if you fancied the design of the Galaxy Z Flip3, then you will have no qualms with the design of the Z Flip4 either. 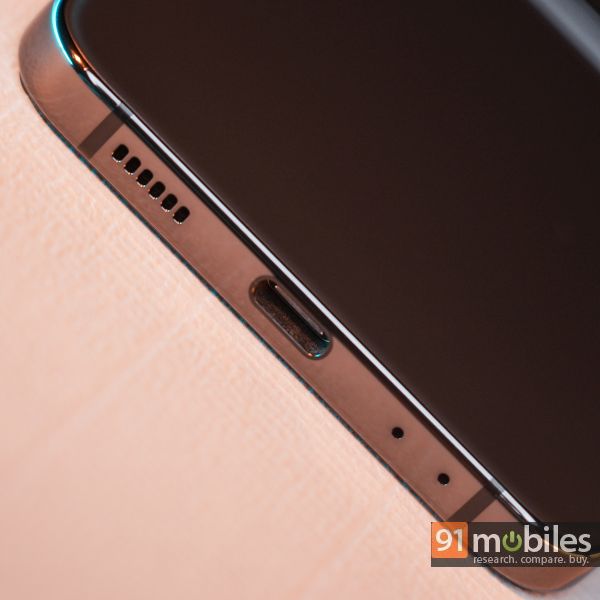 As for the I/O, the device ships with a power button cum capacitive fingerprint sensor on its right-hand spine, which worked superbly during my stint with the phone. The phone comes with a USB Type-C port towards the bottom, which is flanked on either side by a speaker grille. The volume rocker has been positioned above the power button and although the toggle felt adequately tactile, its placement did leave something to be desired. Be that as it may, the smartphone is reasonably rugged and the device comes layered with Corning’s Gorilla Glass Victus+, which is more resilient than the Gorilla Glass Victus coating on the Flip3. What’s more, much like last year, the Flip4 also touts IPX8 certification meaning you can use the device near a water body, or in a shower without worrying about damaging the phone’s innards. 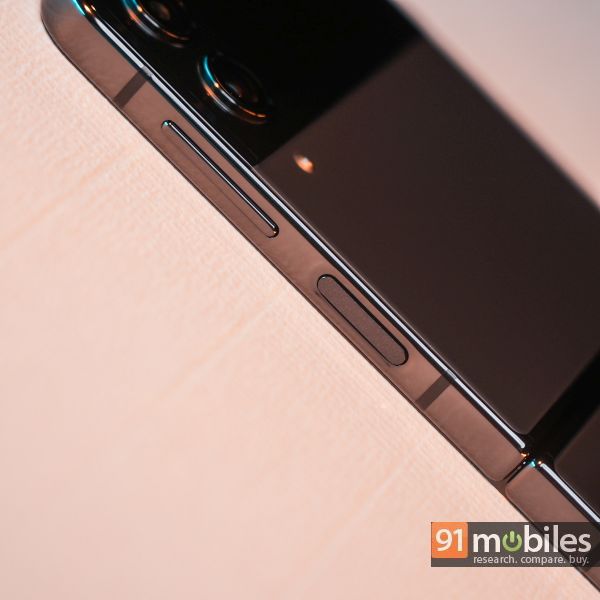 The Galaxy Z Flip4 features the same displays as seen on last year’s model too. To wit, the handset ships with a 1.9-inch cover display which, by the way, is backed by Super AMOLED tech and offers a resolution of 260 x 512 pixels. The main display, which is accessed by unfolding the phone, measures 6.7-inches, is backed by Super AMOLED smarts, and offers an FHD+ resolution. What’s more, much like last year, the panel refreshes at 120Hz and can relay both, HD as well as HDR media from OTT services like Netflix. The screen’s viewing angles are top-notch too and I found the peak brightness levels to my liking as well. Unfortunately, much like its predecessor, the Flip4’s screen also comes with a discernable crease. While you won’t notice it all that much when viewing content head-on, it is quite evident when you look at the panel off-axis. 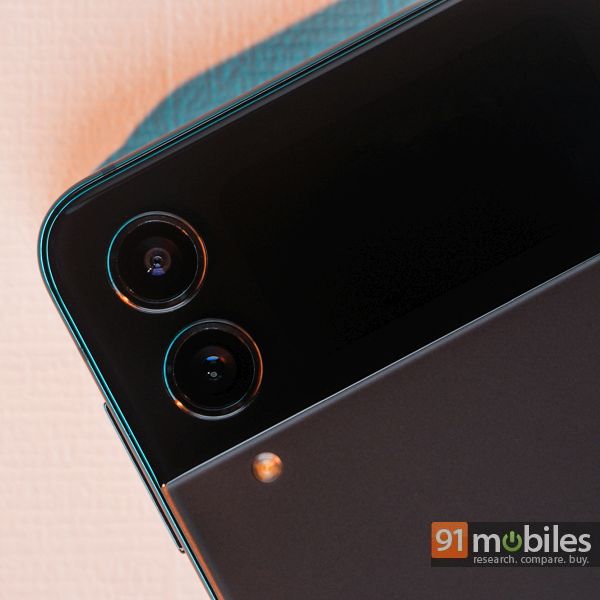 The cover display has seen some refinements, though and it now supports more widgets from the word go. And, as always, the screen can relay notifications with the phone snapped shut. You can even access a handful of quick access shortcuts by swiping down on the cover display or snap a photo without opening the phone by pressing the power button twice. In doing so, the cover display will double up as your phone’s viewfinder and you can use swipe-based gestures to change the cameras (wide or ultrawide) or to switch between photo and video modes. 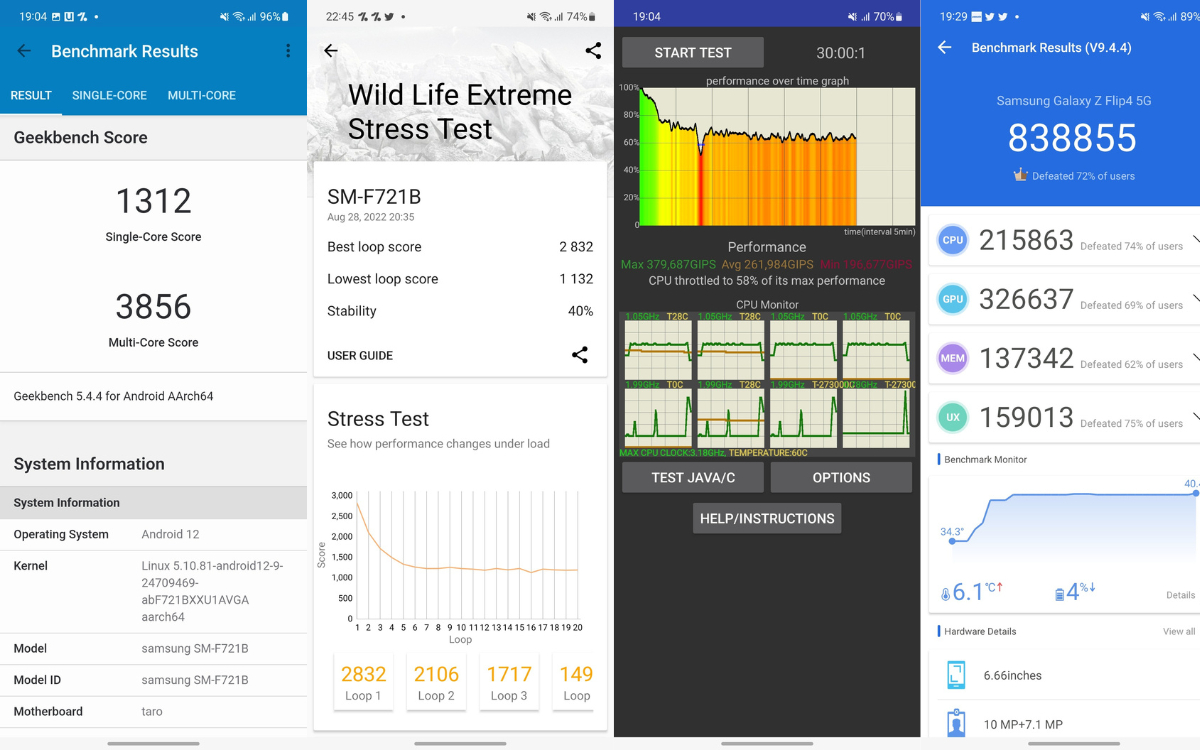 Now, I’ve already spoken in length about the Flip4’s performance in my comparison article where I pit the device against the Galaxy Z Flip3, so give it a read if you want more insights on the same. But, to get everyone up to speed, the Flip4 is a fantastic performer and the device one-ups its predecessor in synthetic benchmarks by quite some margin. For the uninitiated, the smartphone is backed by Qualcomm’s Snapdragon 8+ Gen 1 SoC which works alongside speedy LPDDR5 memory and UFS 3.1 storage. Unsurprisingly, the handset blitzes through routine workloads involving browsing various social media platforms or juggling a dozen or so apps in memory. That said, despite being backed by a more efficient chipset, I noticed that the phone would throttle when subjected to sustained workloads. The same holds true for gaming too and the device would often drop the in-game frames below 60FPS in Apex Legends Mobile too. Turn the page over to a more demanding game like Genshin Impact and you’ll notice the FPS drops much sooner into your gaming session. 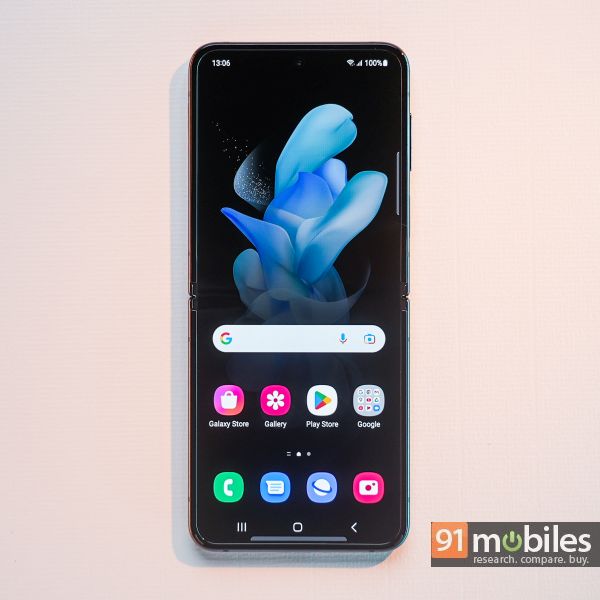 Be that as it may, I am convinced that the phone offers a significantly better battery backup than last year’s model. To wit, I was averaging around five hours of screen on time with the set, with my usage comprising using the phone for messaging, browsing social media feeds, and watching videos / streaming music on Apple Music. On the flip side, I wish the device would charge quicker and as things stand, the phone’s 25W fast wired charging speeds (and 15W wireless charging speeds) pale in comparison to the competition. As such, you’ll have to stay tethered to a wall charger for one hour and fifteen minutes to refuel the phone’s 3,700mAh battery completely. As for software, the device boots OneUI v4.1.1 on top of Android 12. The UI is fairly intuitive and user-friendly and first-time Samsung Galaxy owners will take no time to get familiar with the interface. The custom skin is flush with customisation features too and you can even install third-party icon packs on the set by utilising the company’s Theme Park app which can be downloaded from the Samsung Galaxy store. The handset also gets a bunch of unique features which benefit from its flexible design. For instance, the device comes with a FlexMode utility, which can be used to split an app and its core toggles when the phone is propped at a 90-degree angle. As an example, you can have a YouTube video playing in the top half, with the listening controls positioned at the bottom half of the screen. In doing so, you will be able to seamlessly view the content without holding the phone and can access the controls to variate the volume or the timestamp slider easily. 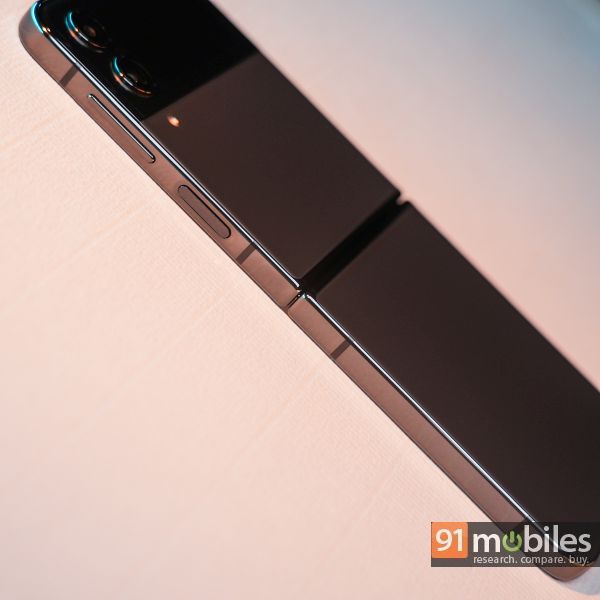 Camera-wise, the Galaxy Z Flip4 ships with a 12MP wide and a 12MP ultra-wide sensor. For selfies, the device gets a 10MP snapper up front. Interestingly, Samsung has employed a 65 percent brighter sensor this time around, which did elevate my photography experience with the phone. In fact, in broad daylight, the Flip4 mitigated lens flaring emanating from the sun much better. The images, on the whole, offered vivid colours and ample detailing too. Further, the corner sharpness of the snaps was on par with the pixel-binned images from competing sets as well. If anything, the handset tends to darken the shadows in a bid to overturn a more contrast-y scene. Furthermore, the ultrawide snapper could do with a few tweaks too and the camera’s output glosses over the details of objects positioned around the edges of the frame.

On the contrary, the handset’s lowlight photography chops have improved too. To wit, in the sample shot above, you can clearly tell that the smartphone offers better visibility and lesser noise than the snap from the Galaxy Z Flip3. And, while the 10MP selfie snapper clicks passable images at best, you can always click higher-res self-portraits by using the phone’s main camera, which is great.

The Samsung Galaxy Z Flip4 carries forward its predecessor’s legacy and offers a stylish, clamshell foldable design. Aesthetics aside, the smartphone brings a better battery backup, a faster and more efficient SoC, and improved cameras to the mix too. Be that as it may, Android flagships with a conventional design will still offer a better bang for your buck, and you’ll find no shortage of enticing smartphones retailing for much less than the Galaxy Z Flip4’s starting price of Rs 89,999 in India. Understandably, the Flip4 makes up for its shortcomings with its foldable design, which – although three generations old – still looks otherwordly. Consequently, if you’re sold on the idea of foldables and want a phone that makes a splash every time you take it out of your pocket, the Galaxy Z Flip4 should be at the top of your wishlist. For everyone else, the market will have something better to offer, including Samsung’s very-own Galaxy S22 range of devices.