It’s hard to pen down a list of the best truly wireless earphones in the market without mentioning Sony’s excellent WF-1000X range. The company’s offerings have, for the most part, knocked the competition into a cocked hat and for good reason – after all, the brand’s flagship range doesn’t just offer impressive acoustics, but comes with class-leading adaptive ANC, among other things. That’s partly why I was enthralled when the company sent me their flagship WF-1000XM4 for review. Launched back in 2021, the earphones have only just made their way over to the Indian shores. Despite that, the earbuds are still among the best pair of TWS earphones money can buy. Here’s why.

I remember auditioning Sony’s WF-1000XM3 back in 2020 on a trip to Taiwan. Right off the bat, I was smitten by the unit’s ANC chops, as well as the pair’s immaculate sound quality. That said, the unit’s fit left a great deal to be desired and I couldn’t come to terms with using the chunky earphones day in and day out. Well, Sony clearly went back to the drawing board as the newer WF-1000XM4 touts a smaller footprint – 10 percent smaller, to be precise. 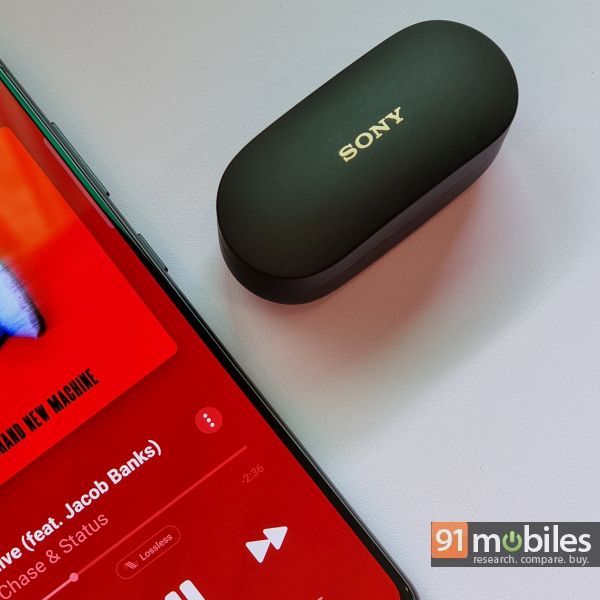 Don’t get me wrong – the earphones are still quite bulky and tend to weigh my ears down when I’m working out. That’s partly why I didn’t make the most of the unit’s IPX4 rating as the earpieces would fall off when I was doing handstands or burpees. Regardless, unlike their predecessors, the pair looks more subtle draped around a user’s ears. What’s more, the company has also reduced the size of the charging case by around 40 percent. Consequently, unlike the M3’s, the WF-1000XM4 comes bundled in a more pocketable case too. 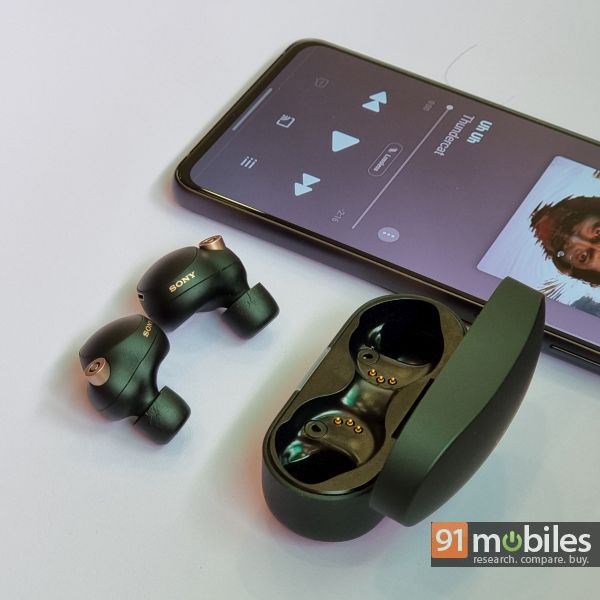 Sony didn’t just reduce the overall size of the earpieces and the case, mind you. The shape of the earpieces, for one, is quite different too and the newer model conforms to a rounder aesthetic. The company has utilised a matte finish for the outer shell which when paired with the earphone’s shiny metal accents, imparts a rather luxurious in-hand feel. That’s not all, as the pair also ships with a brand-new set of noise isolation ear tips that have been specifically deployed to mitigate noise better. A fringe benefit of the same is that the ear tips conform to the shape of the user’s ear canal akin to foam tips, thereby creating a comfortable in-ear seal as well. Rest assured, you can sit and work with the M4’s in your ears for hours on end without feeling any discomfort or listening fatigue. 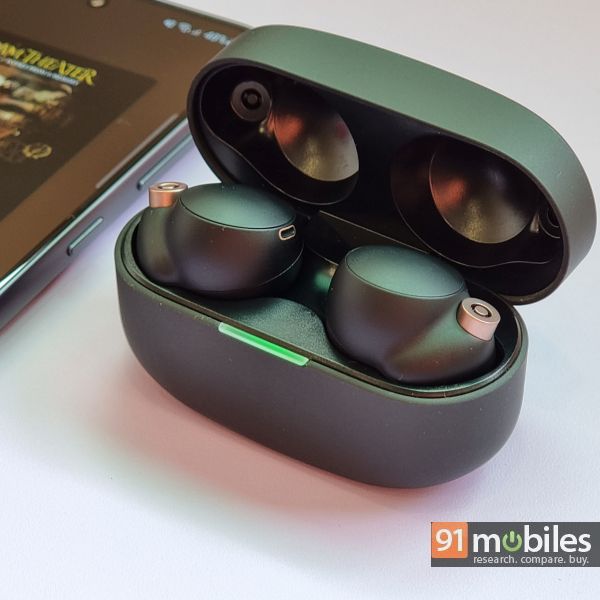 As a lagniappe, the WF-1000XM4’s otherwise sizable earpieces offer a generous touch surface, ensuring you can toggle various system commands and control the music playback without having to reach for your phone. What’s more, you can even customise the actions invoked by tapping on either the left or the right earpiece. To do so, you’ll need to install the company’s Headphone Connect app on your Android or iPhone. Once done, you can head on over to the ‘system’ sub-head and tweak the inputs for either earpiece. The touch controls were plenty responsive during my testing and I never found myself tapping an earpiece over and over again to register my command either, which is great.

App, ANC, and other features

As prefaced previously, the Sony WF-1000XM4 ships with a companion app dubbed Headphone Connect which is available for both, iOS and Android platforms. Now, the earphones work without the app too, but the utility enables a slew of features that make using the M4 more fun. Take the Speak-to-Chat feature, for instance, which when enabled, automatically pauses the music playback and heightens a user’s sensitivity to ambient sound the second they start speaking. The feature is extremely intuitive and can be triggered by so much as a cough. On the flip side, if you tend to sing or hum whilst listening to music, you might want to keep the utility disabled as it will abruptly pause your playback. Thankfully, you can also use the earphone’s Quick Attention feature, which works in a similar fashion, albeit requires an additional step. To wit, users can toggle the earphone’s Quick Attention feature by long-pressing the left (or the right) earbud. That’s not all, as the earphones also support ear detection and will conveniently pause a song if you remove an earbud. 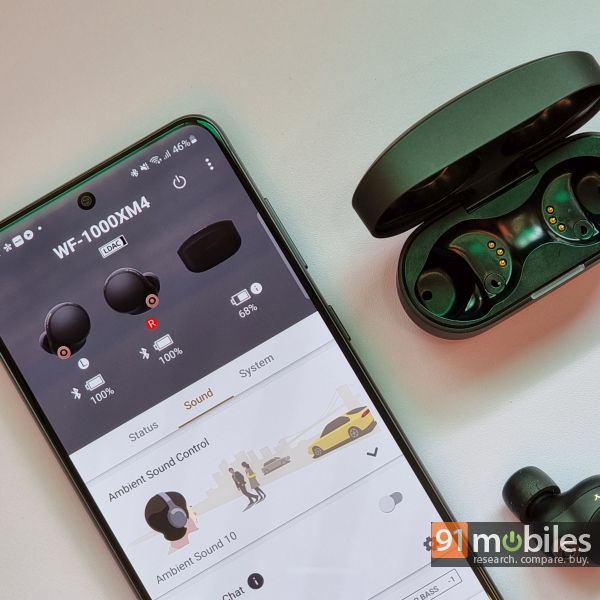 Honestly, these features are but the tip of the iceberg in the WF-1000XM4’s repository. Case in point, the earphone’s adaptive sound control tech, which flips between four different activity presets, as per your actions and surroundings. Notably, the earphones can gauge whether you’re sitting idle (staying), walking, running, or commuting (transport). Each preset can be customised to either enable ANC, or a specific level of ambient sound. The earphones also support the company’s DSEE Extreme enhancement that upscales a relatively lower bitrate audio file to high-res quality. Lest I forget, the earphones are compliant with Google’s fast pairing protocol and you’ll notice a prompt pop up on your Android phone the second you open the lid of the WF-1000XM4’s case. Unfortunately, I couldn’t quite get the pair to connect to two devices simultaneously, which is a bummer.

The Sony WF-1000XM4 doesn’t disappoint in the ANC department either and the pair can comfortably cancel out the humdrum of an engine, or the chitter-chatter in an office space. I, for one, routinely use the earphones whenever I am drafting a product review on my PC. You see, I happen to have a mechanical keyboard with particularly loud blue switches and the WF-1000XM4 dampens the noise from the key taps considerably. Rest assured, buyers opting for the earphones will not find the pair lacking in the ANC or software department.

Coming to the crux of the matter, the Sony WF-1000XM4 is backed by a pair of 6mm drivers positioned inside each earpiece. The earphones support SBC, AAC, and LDAC codecs and can operate across a frequency range of 20Hz to 40KHz. Do note that I used Apple Music’s lossless media for the purpose of my testing. I had also set the earphones to operate exclusively on the high-bitrate LDAC codec. 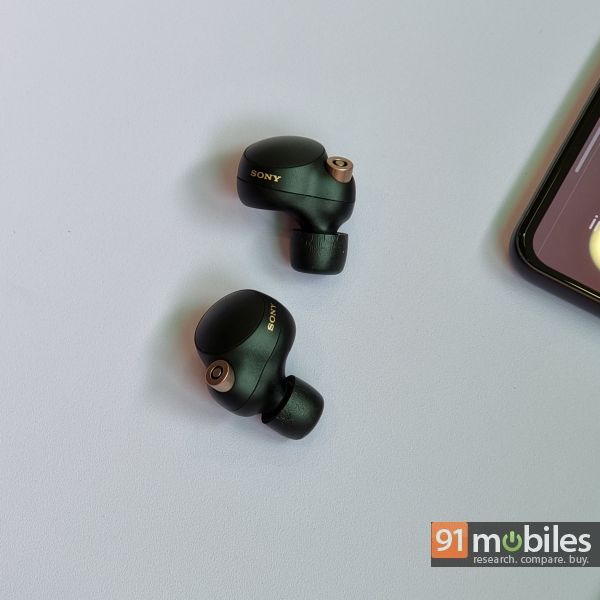 Going into the review, I expected to be wowed by the M4’s audio prowess and sure enough, the pair lived up to my expectations. Now, Sony has a reputation for launching solid bass-driven earphones, and the company’s flagship TWS is no exception to the rule. To wit, the earphone’s bass output offers a lot of weight and punchiness. The beats impact with a satisfying slam and the sound output rarely ever feels bloated or muddy. In fact, out of the box, I noticed the M4’s laid greater emphasis on a track’s low-end output. However, dialling down the bass manually or by selecting the ‘Bright’ preset paves the way for a more refined listening experience. 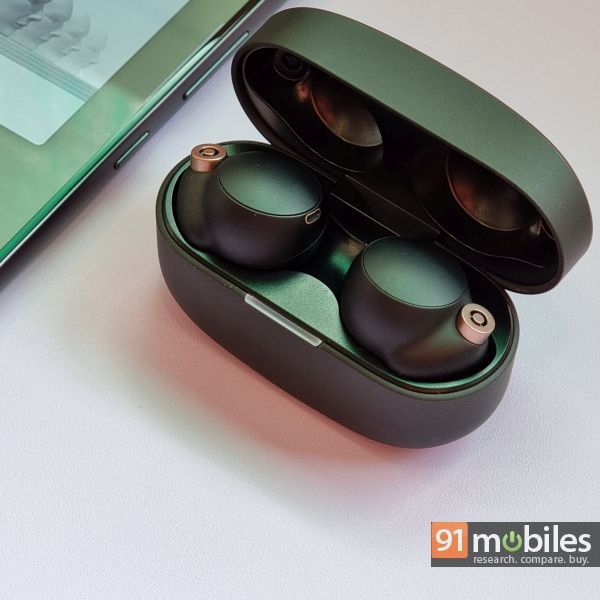 To my ears, the Sony WF-1000XM4 excelled in delivering meaty beats with phenomenal depth and texture. At the same time, the earphone’s vigour in relaying thunderous bass was never a thorn in the side of the rest of the frequency spectrum. Take DDJ’s Moon Walking Through The Calabasas wherein, the rhythmic beats albeit impactful, don’t take the limelight away from the vocals, or the guitar strums. What’s more, unlike most bass-forward earphones, the M4’s low-end output doesn’t affect the tonality of the instruments or the vocals in play. Case in point, Wasted Times by the Weeknd, a track that’s chockablock with energetic beats. Be that as it may, I couldn’t help but tap my feet and sing along to the lush, detail-laden, and natural-sounding vocals presented by the WF-1000XM4s. 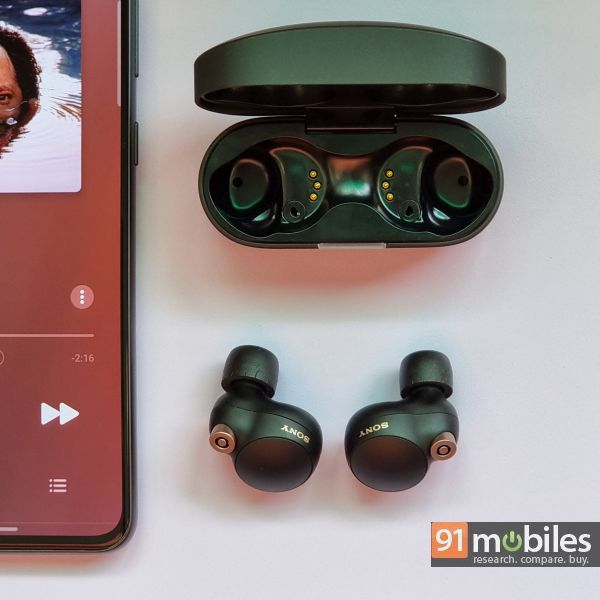 The scenery remained unchanged when I switched over to Movement by Hozier too. The thumping slam from the kick drums at the start sounded surreal, though the bass line didn’t take anything away from the track’s soothing vocals either. It also helps that the earphones don’t sound sibilant, so you can even use the pair to listen to your favourite podcasts. I’d also like to add that the M4’s offer stellar imaging, so tracks layered with a lot of instruments and SFX don’t sound muddy or congested. Porter Robinson’s Goodbye To a World is a good example of the same and during the build-up for the first verse, the soundtrack introduces a handful of instruments and sound effects. Despite that, I could comprehend the intricacies of each instrument with utmost clarity. On the flip side, the M4’s treble output leaves something to be desired. To that note, songs from the rock or metal genre don’t sound very energetic. The strums from the electric guitar in Mr. Brightside, for instance, lacked bite. 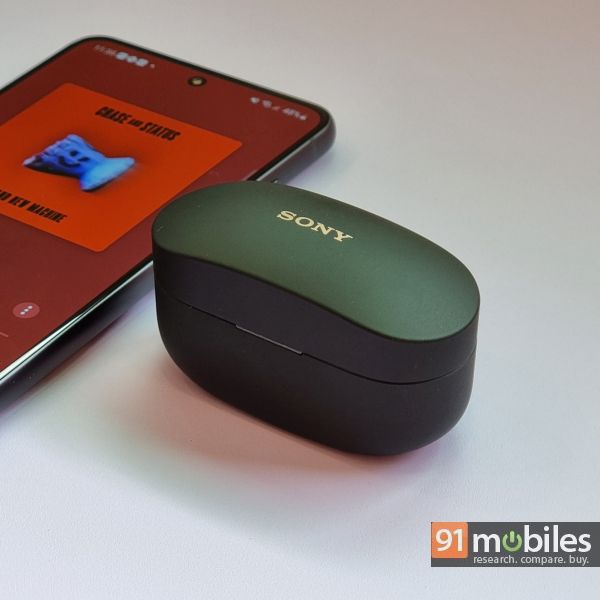 Thankfully, the Sony WF-1000XM4 offers a sizable battery backup, ensuring you can listen to your favourite songs for a week of Sundays. On average, the earphones lasted me around seven hours off a single charge, and that’s with ANC enabled. The bundled case can recharge the earphones around two-three times too, which is great. What’s more, the docking case supports wireless charging as well, thereby allowing users to charge the earphones seamlessly.

The Sony WF-1000XM4’s pricing isn’t for the faint of heart and the earphones retail for Rs 19,990 in India. With that said, the pair does more than enough to justify its steep price and offers a treasure trove of features, including cutting-edge adaptive ANC,  a stylish, all-day wear design, and surreal audio quality. Now, do note that Sony isn’t the only vendor invested in the premium TWS earphones space and buyers looking for a pair of top-notch, wire-free buds will be spoilt for choices. To wit, the WF-1000XM4 goes up against the Samsung Galaxy Buds Pro (review) which retails for considerably less and comes toting class-leading features too. However, the M4’s put forth a well-rounded package that’s quite hard to beat. The Galaxy Buds Pro, for instance, doesn’t support any high bitrate audio codecs and consequently, cannot relay as much information. 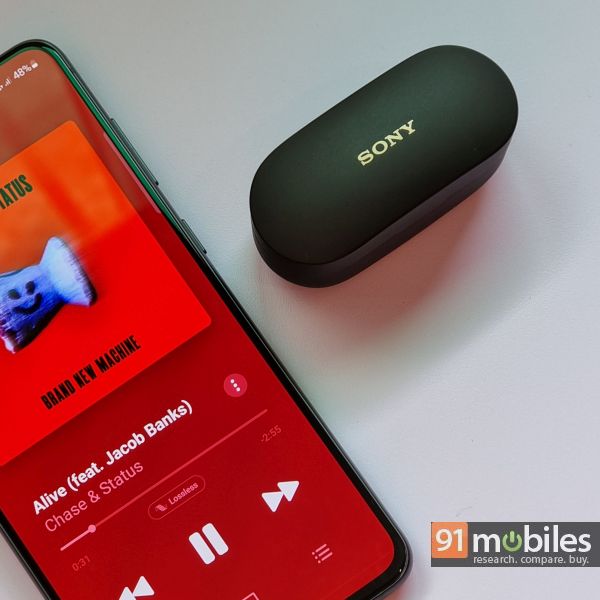 On the other hand, those invested in Apple’s ecosystem will find plenty to like about the AirPods Pro too. In fact, unlike the M4’s, the AirPods Pro offers seamless connectivity with an iPhone. It also helps that the earphones tackle voice calls better. That said, Sony’s offering sounds a tad better. All said and done, the Sony WF-1000XM4 doesn’t have any inherent shortcomings and consequently, buyers looking for the best of the best will feel right at home with the earbuds.