Back in the day, most buyers would’ve had to spend an arm and a leg to get a basic Smart TV, with models offering 4K resolutions costing even more. Thanks to brands like Xiaomi, Smart TVs have come down drastically in price. So much so, the company managed to sell five million units since entering the TV biz two years ago. Suffice it to say, Xiaomi has managed to buck the trend with its affordable TV sets which begs the question – can the company replicate its success in the premium segment too? I say this, as the company recently launched its flagship set – the Mi TV QLED 4K in India. At Rs 54,999, the TV is quite the investment, so in this review, let’s see if it’s worthy of your bucks.

I spoke in length about the design of the Xiaomi Mi TV QLED in my first impressions video so if you missed that, do check it out. However, for the uninitiated, the Mi TV QLED 4K is a premium TV and correspondingly, warrants a luxurious design. To that note, the TV comes toting a silver metallic frame which offers negligible give or flex when lifting/setting down the unit. There are minimal bezels surrounding the 55-inch 4K panel which shouldn’t be surprising considering the TV ships with a screen-to-body ratio of over 96 percent. What’s more, while the TV does feature the company’s branding, the logos and the text have been positioned subtly. Ergo, the Mi TV QLED offers an uninterrupted viewing experience that’s furthered, in parts, owing to its elegant, minimalistic design. 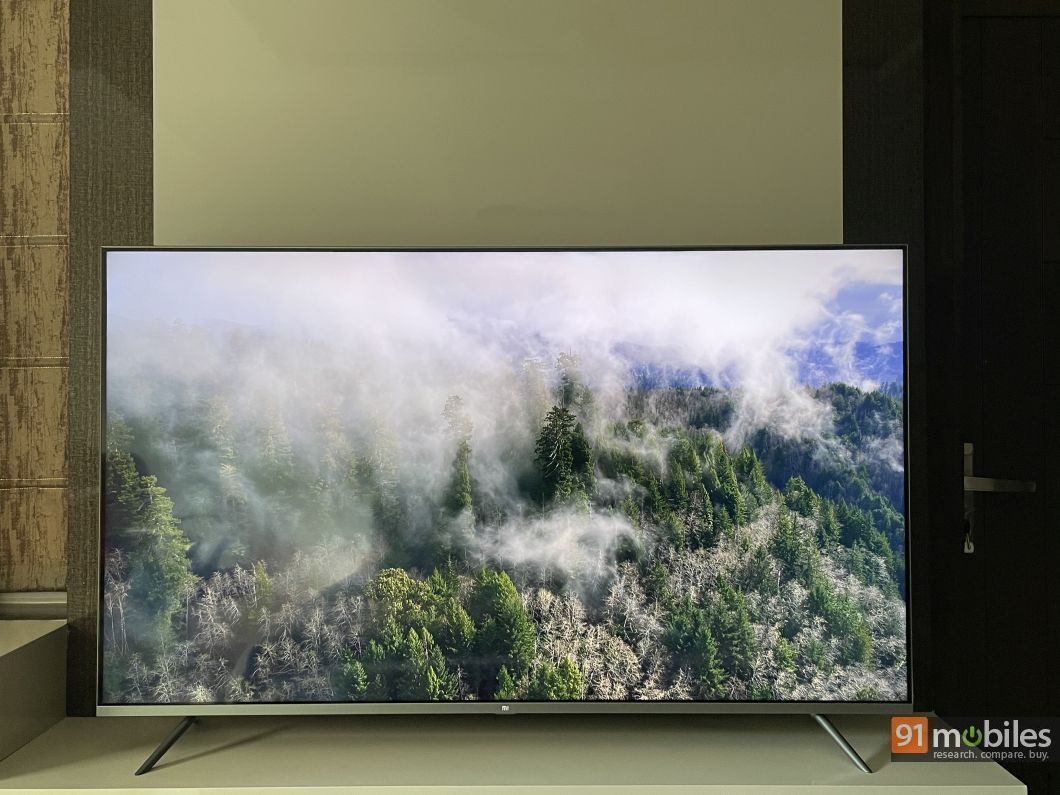 Moving on, the Mi TV QLED 4K comes with sturdy metal footrests in the box which won’t occupy a lot of space on your table. That said, the slots to install the footrests are positioned on the far ends of the TV and therefore, you might need a wider table to set the Mi TV QLED 4K down properly. Unfortunately, Xiaomi doesn’t bundle wall-mounting brackets with its TVs and the latest from the brand is no exception to this rule. So, if you plan on getting the TV wall-mounted, you will have to get a kit separately. 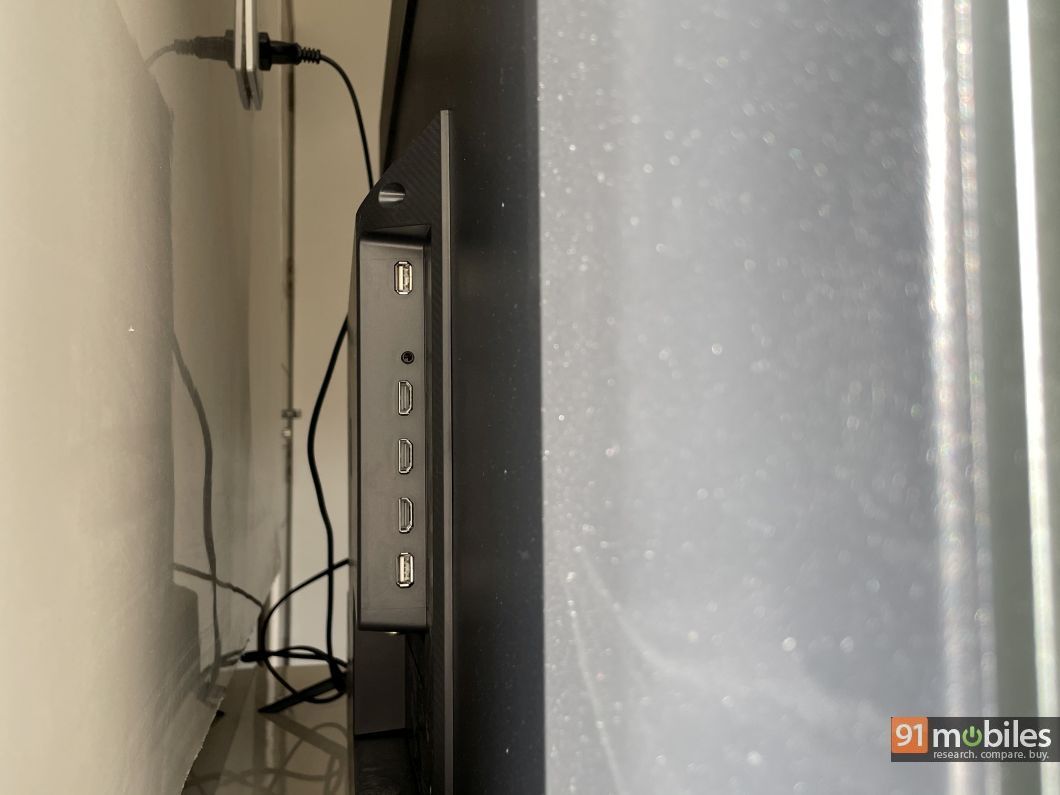 Coming to the rest of the design features, the Mi TV QLED 4K makes use of plastic towards the back. You’ll also find a slurry of ports here, including three HDMI 2.1 ports (one of them supports eARC, by the way), two USB 2.0 ports, a 3.5 mm headphone connector, an ethernet socket and an optical audio output and AV ports. I’d also like to add that the TV can connect to both, 2.4GHz, as well as 5GHz Wi-Fi networks and is Bluetooth v5.0 compliant. During my time with the TV, I didn’t find the device lacking in terms of connectivity in any way, whatsoever. While I didn’t have a lot of peripherals to pair with the TV save for my gaming consoles, I am confident that users will find little to complain about here. 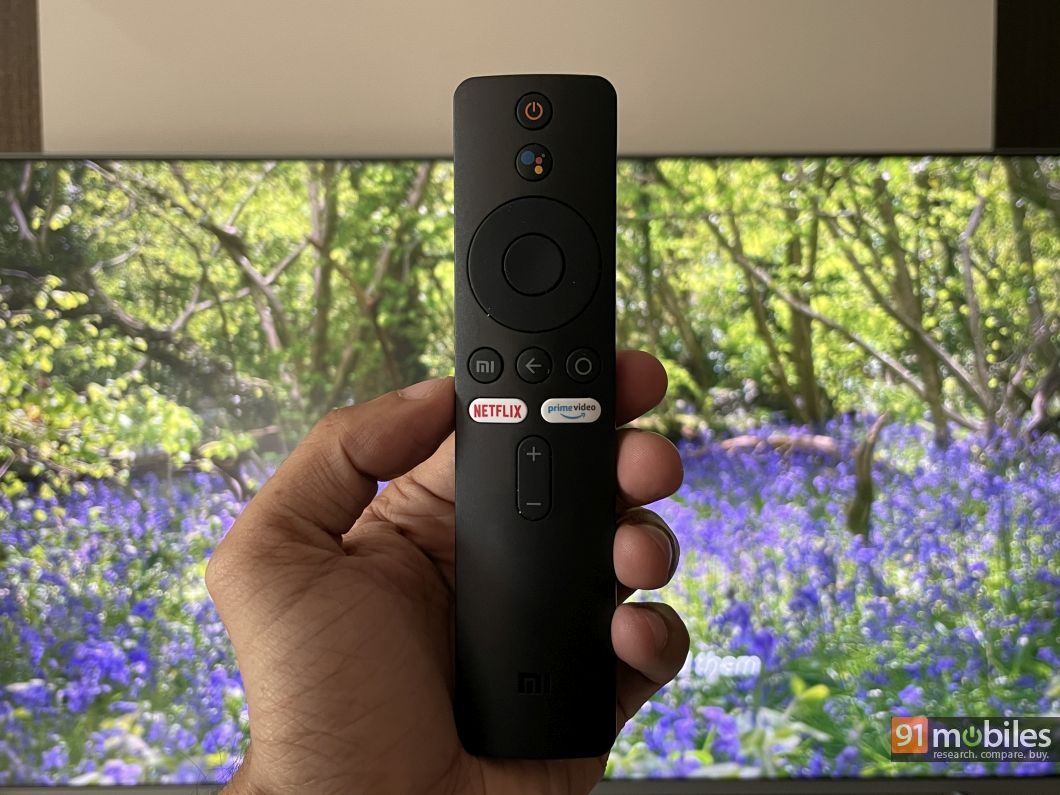 It goes without saying that the Mi TV QLED 4K ships with a remote. Unlike the TV, the remote hasn’t seen any design overhaul and comes toting a plastic construction and connects to the TV over Bluetooth. The controller offers dedicated keys for Netflix and Prime, along with quick-access toggles for the company’s PatchWall OS. That said, the construction and in-hand feel of the remote leave much to be desired. Not to mention, Xiaomi doesn’t bundle AAA batteries with the remote either, which comes across as unnecessary cost-cutting for a TV retailing in the premium price segment.

The USP of the Xiaomi Mi TV QLED 4K is that it is among the more affordable QLED TVs in the market. Specs-wise, the unit features a 55-inch, UHD VA panel with global dimming. The last bit had me worried, but thankfully, the Mi TV QLED offers satisfying black levels and contrast. It’s certainly not going to be as good as a TV with local dimming zones, but the blacks do in fact, appear black and not a distant shade of grey. 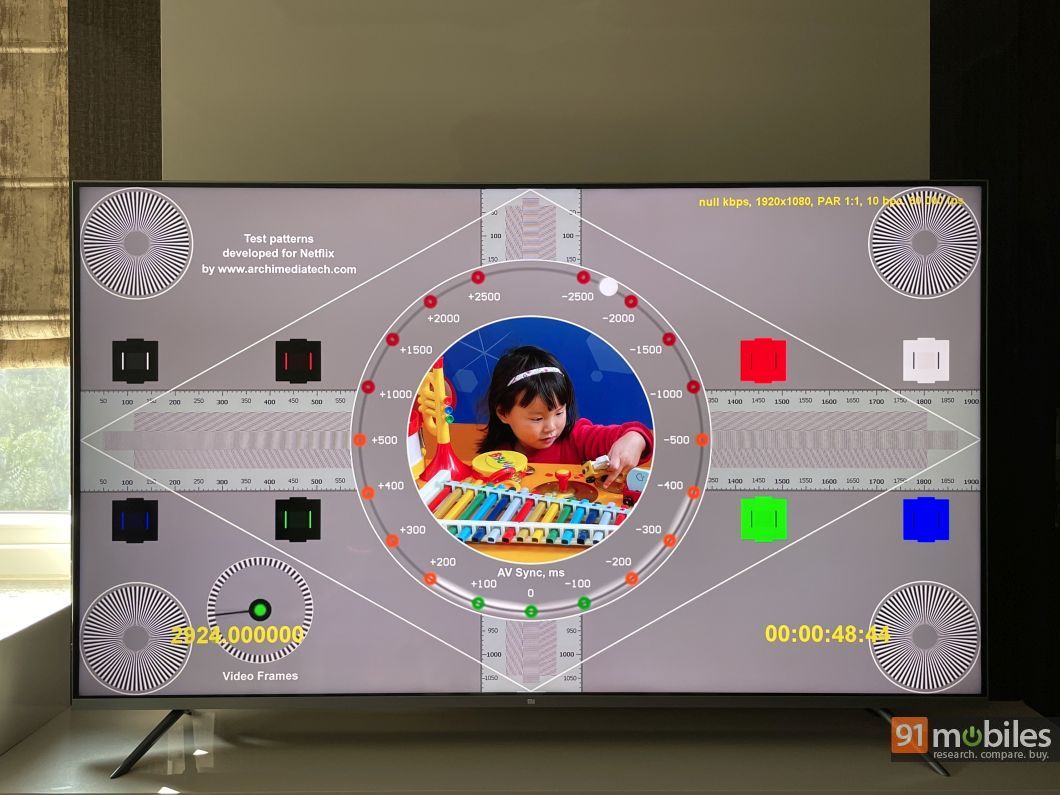 The fact that the Mi TV QLED 4K offers good contrast is particularly advantageous when watching HDR content on the device. The TV supports all popular HDR formats, including HLG, HDR 10+, and Dolby Vision and in the shows that leverage these, I found the viewing experience on the Mi TV QLED 4K a class apart. What’s more, you can even choose between Dolby Vision’s Dark and Bright profiles for select shows and movies available in Dolby Vision. To do so, simply long-press the ‘Mi’ button on the remote and tap picture quality from the prompt that follows. The TV will then automatically give you relevant presets. From my testing, I found the ‘dark’ preset more to my liking as my room doesn’t get a lot of sunlight. However, you can try the ‘bright’ preset if your TV is set up in a room that gets plenty of natural light. 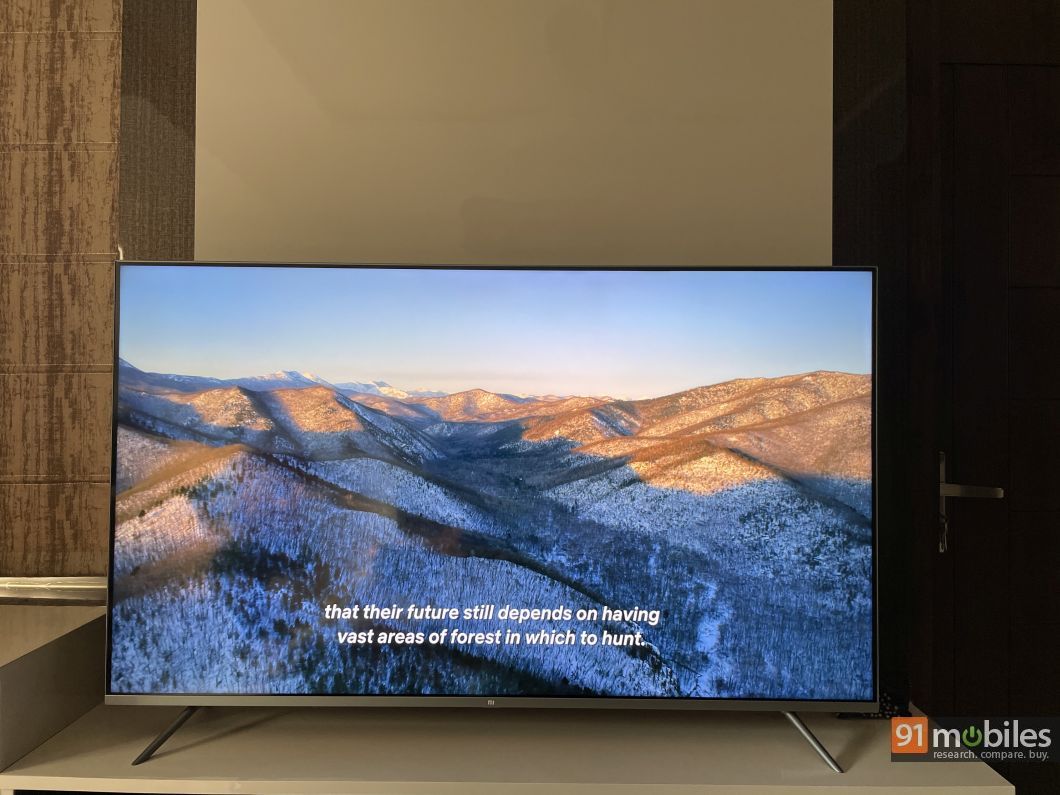 With my preferred settings in place, I noticed that the TV could bring out the details from the shadows or the darker parts of a scene really well. As a result, fight sequences in Daredevil became more apparent and gripping. Furthermore, I am in awe of how well the TV handles black levels and mitigates backlit bleeding. In Netflix’s Our Planet documentary, there’s a particular scene in the ‘forests’ episode wherein, viewers get to feast their eyes on an aerial view of the Earth. Here, the better part of the screen was black, whilst the rest of the panel exuded bright colours. Much to my surprise, the Mi TV QLED 4K did a fantastic job of not just outputting rich and vibrant hues in the scene, but the unit also kept the black levels in check. 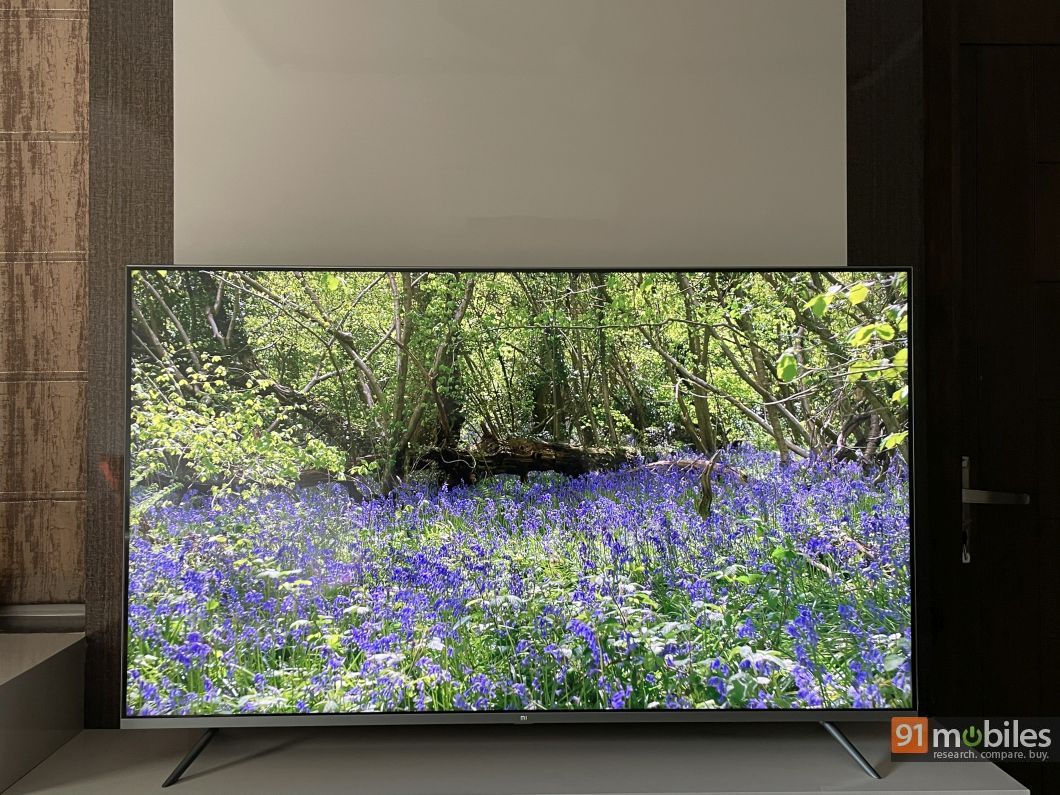 Turn the page over to HDR 10+ content and you’ll find a similarly pleasing result. I had a gala of a time revisiting The Grand Tour on Amazon Prime and rest assured, the Mi TV QLED 4K dazzled me with its fantastic picture quality. I’d also like to add that despite turning off MEMC to avoid the dreaded soap opera effect, the fast car sequences in the show didn’t appear stuttery to my eyes. Consequently, unless you’re watching live sports like football or basketball, I’d advise you to keep the setting disabled.

So far, I’ve been all praise for the Mi TV QLED 4K’s panel but, that’s not to say that it’s perfect. Since the TV incorporates a VA panel, the viewing angles on the Mi TV QLED 4K are quite bad and unless you’re watching content head-on, you will notice slight discolouration. The company also didn’t put a number on the display’s peak brightness level and while I didn’t face any issues with the same, your mileage could vary depending on where you position the TV. 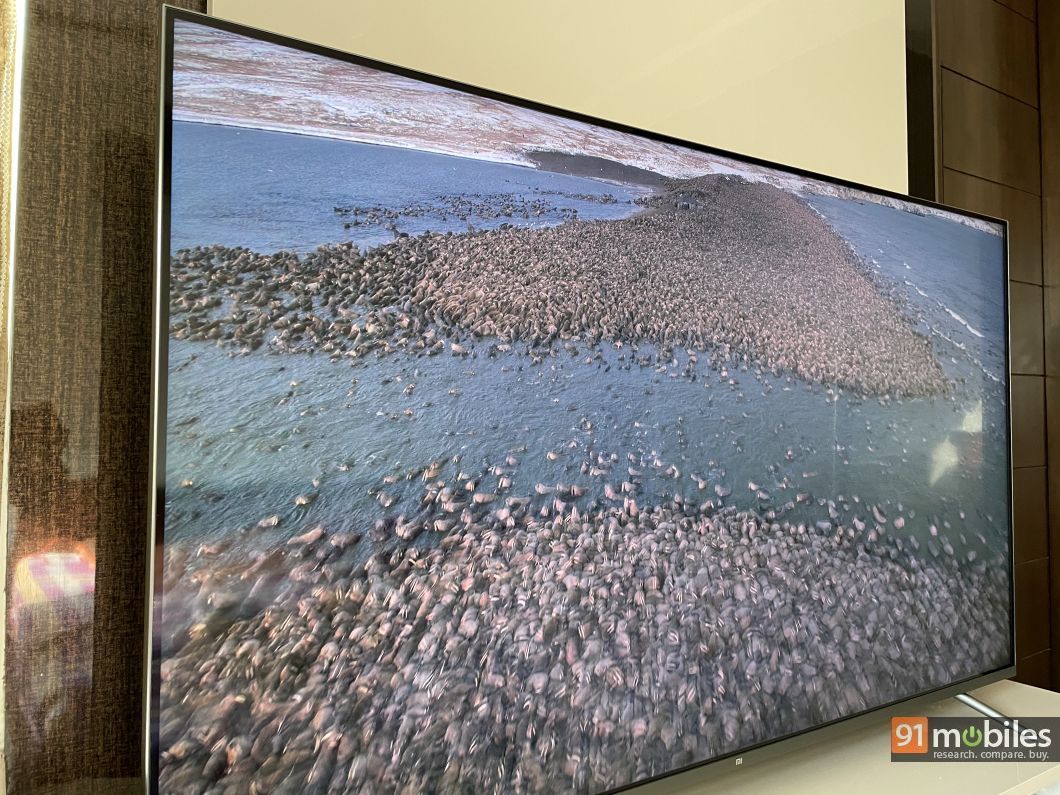 In terms of audio, the Mi TV QLED 4K features quality speakers which should keep you away from investing in a dedicated soundbar for a good while. The unit comprises four full-range drivers which work alongside two tweeters to output satisfying sound with ample fullness and loudness.

Powering the smarts on the Mi TV QLED 4K is a quad-core A55 processor from MediaTek. The SoC comes equipped with 2GB of RAM, 32GB of storage, and a Mali G52 MP2 GPU which work together to keep things chugging along nicely on the Mi TV QLED 4K. During my stint with the TV, I seldom faced any issues with the TV’s performance – apps opened swiftly, the keyboard popped up quickly during searches and the set jumped from PatchWall OS to Android TV and vice versa fluidly too. There were times when the TV slowed down to catch its breath, but they were far and few in between. 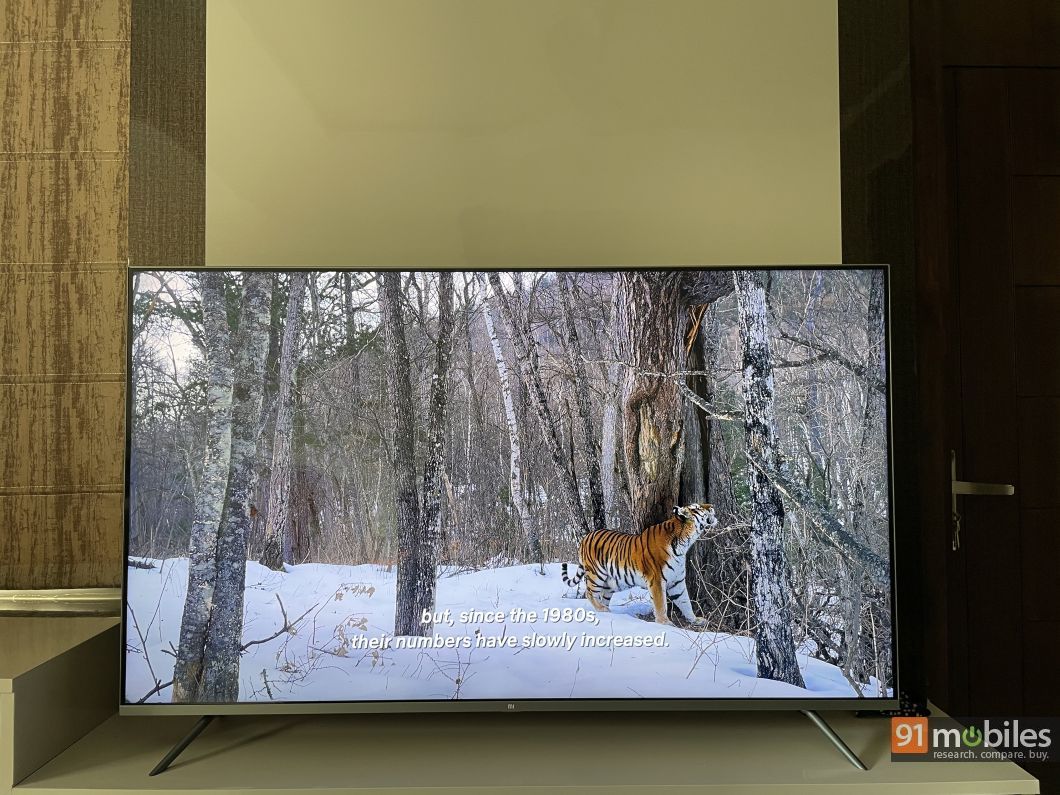 In terms of software, the Mi TV QLED 4K features the company’s PatchWall OS which, in its latest iteration, brings a suite of stylistic and functional changes. For one, content recommendation has improved drastically over the years and the TV now offers a slew of new categories, including shows available in Dolby Vision as well as HDR 10. The UI has seen some visual enhancements too, with the recommendation pane featuring a stunning gaussian blur along with larger icons and text. What’s even better, the TV is among the first in India to boot Android 10 from the get-go. Add to that support for tons of apps via the Google Play Store, as well as other niceties like built-in Chromecast, and the software experience on the Mi TV QLED 4K is simply put, unmatched.

The Xiaomi Mi TV QLED 4K costs Rs 54,999 in India and for the price, the TV makes for a good buy for anyone looking to move up the ladder in terms of picture quality without splurging a ton on their purchase. The icing on the cake is that the TV looks good and offers a quality software experience as well. It’s not without its faults but for the price, the TV hits more than it misses and consequently, gets a recommendation from me.

Xiaomi blacklisted by US government for ties to Chinese military