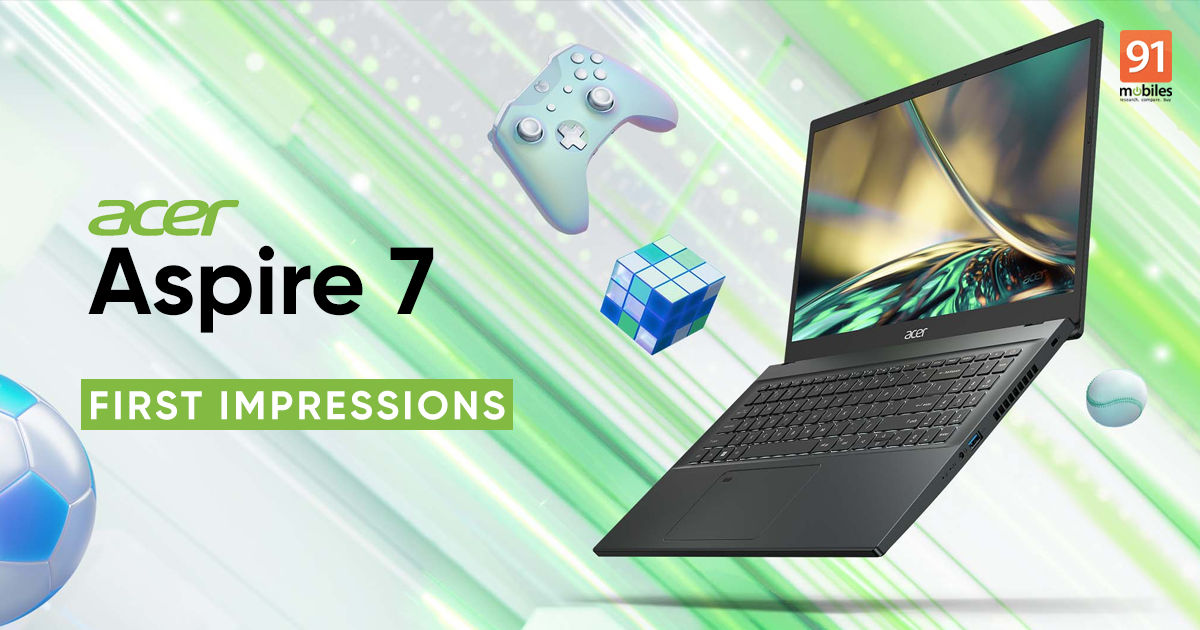 We could be preaching to a choir but buying a new laptop is a daunting task, to say the least. Not only does it warrant having to sift through a ton of options, but it’s almost impossible to get a laptop that checks most, if not all of the right boxes including a good display, a classy yet thermally-efficient design, good performance and a comfortable keyboard. That is, until now, as recently, Taiwanese laptop giant Acer announced the all-new Aspire 7 in India which isn’t just backed by competent hardware, but the device looks the part of a premium product too. We managed to get our hands on the unit and here is a quick overview of the same.

Let’s kick things off by taking a closer look at the laptop’s design. Now, Acer’s design team is no stranger to good-looking machines and the company’s latest gets top marks in the aesthetics department as well. From a distance, the laptop’s monochromatic charcoal black colourway won’t attract any eyeballs but, up close, the finish shimmers ever so slightly when light impacts it at certain angles. The icing on the cake is that the effect isn’t too pronounced – instead, the finish strikes the perfect balance between an elegant and an otherwise loud gradient hue. 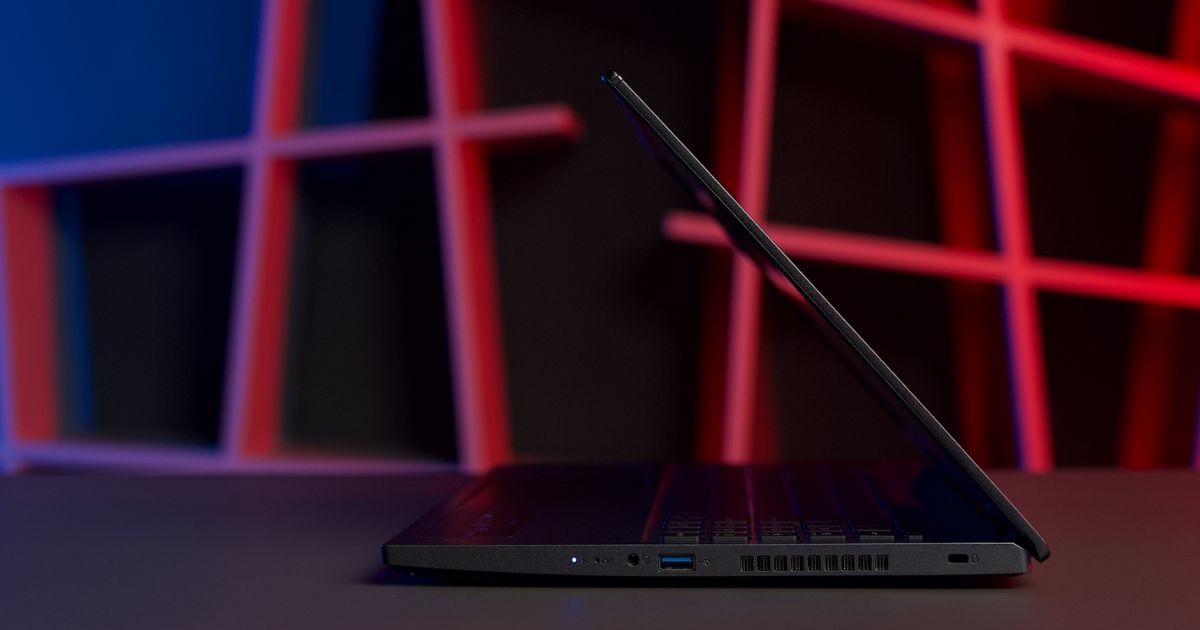 What’s more, the Aspire 7 has been built like a tank and the laptop’s chassis feels superbly sturdy and dense, which can be accredited, at least in parts, to the unit’s aluminium construction. Making matters even more interesting, the laptop’s robust design doesn’t come at the cost of its portability chops either. In fact, the device weighs a smidge over two kilograms and as such, won’t weigh your shoulders down whilst commuting. We’d also like to add that the laptop’s chassis doesn’t offer any give and the keyboard deck is void of any major flex/warping issues either. The laptop’s hinge mechanism offers adequate friction too, and it even raises the keyboard deck ever so slightly for a more comfortable typing experience.

That’s not all, as the Acer Aspire 7 is chockablock with connectivity options and the device ships with a USB Type-C connector that is compliant with the latest ThunderBolt 4 standard. That’s a huge add-on, primarily because while this laptop comes with a good display, you can use the Type-C Thunderbolt port to connect this machine to an 8K monitor. As or the rest of the I/O, you’ll get a total of three USB 3.2 Type-A ports, an RJ45 Ethernet connector, an HDMI port, and a dedicated audio jack with the machine.

Display and keyboard – Excels in both departments

Display-wise, the Aspire 7 ships with a 15.6-inch, FHD+, IPS LCD display. The display is capped at 60Hz, however, offers excellent viewing angles and superbly sleek bezels. In fact, the laptop touts a screen-to-body ratio of over 81 percent, thereby paving the way for an immersive media consumption experience. The same goes for the keyboard and trackpad too, which offer a joyous typing and scrolling experience. The keyboard deck, in particular, is quite accommodating and the keys are well-spaced out as well. The icing on the cake is that the keycaps don’t wobble and the laptop even offers backlit LEDs for the deck, meaning you should be able to type with greater accuracy and use the laptop in dimly-lit environments as well. Lest we forget, the laptop features a full-fledged Numpad as well, which should come in handy if your work requires you to dabble with a lot of excel sheets. The Aspire 7 has a couple more aces up its sleeve too and the laptop’s keyboard deck features inlets which help ventilate cool air through the unit’s chassis. As a result, the laptop offers 10 percent better cooling than competing models that solely rely on their air vents.

As for the trackpad, the unit features precision drivers, which have become a pre-requisite for any machine running Windows 11. The trackpad offers a generous touch surface and clicky left and right mouse toggles. As a result, the unit allows prospective buyers to seamlessly glide through the web pages and make precise selections when using editing apps like Photoshop too. What’s more, the trackpad even ships with a fingerprint sensor which should get you into your home screen in the blink of an eye.

Lastly, let’s talk performance and here, the Aspire 7 truly shines. Spec-wise, the laptop comes with Intel’s all-new 12th gen Core i5-1240P processor which works alongside an Nvidia GTX 1650Ti GPU. The processor touts a big. Little architecture and offers four performance cores and eight efficient cores. That’s not all, as the performance cores support hyperthreading, so, you’ll get a grand total of 16 threads when you couple the hyperthreaded P-cores and the E-cores. 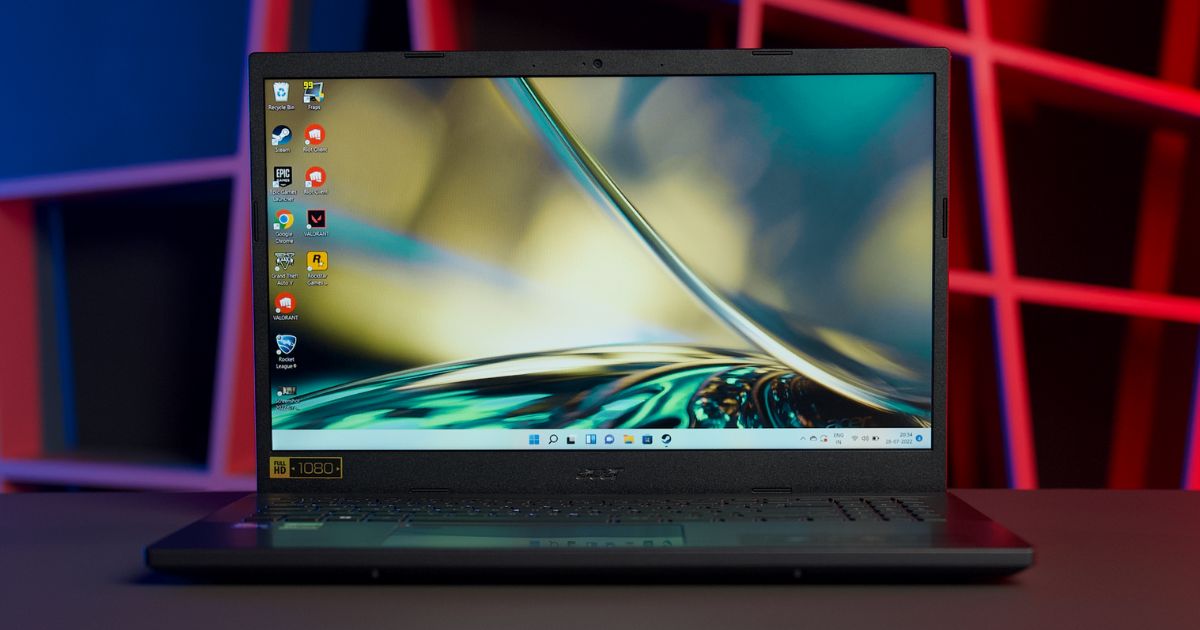 Now, we couldn’t push the laptop to its limits during the short time we had with the device but, we did get a number on its performance chops. In fact, the device is quite adept at handling multi-threaded workloads like video editing and it can even outperform select 11th Gen Core i7 laptops. Take the Cinebench R23 benchmark, which tests a laptop’s single and multi-core performance. Here, Acer’s offering overturned 8,539 and 1,682 points in multi-core and single-core test runs respectively, which puts the laptop above machines powered by say, Intel’s Core i7-1165G7 chipset.

And, thanks to the dedicated GPU, you can even run demanding games on the laptop at medium-high settings. This could partly be attributed to the triple copper pipe design, which consists of two thermal pipes to draw heat from the CPU, and one thermal pipe for the GPU. This essentially allows the CPU and GPU to keep performing at their best while playing high graphics games. Apex Legends, for instance, averaged around 80-100FPS at low-medium settings. Interestingly, while the fans did spin a tad too loud, the laptop’s chassis didn’t feel too hot to the touch and we could comfortably rest our palms on the keyboard deck whilst gaming on the machine.

Turn the page over to something more demanding, like GTA V, and the laptop will comfortably net you around 80-100 FPS at 1080p resolution with most, if not all the visual settings locked to the High preset. The laptop does a commendable job at running esports titles like Valorant and Rocket league as well. In fact, we averaged around 140-160FPS in Rocket League and that’s with all the settings maxed out at 1080p resolution. As for Valorant, the game averaged around 120FPS and that’s with most, if not all of the settings set to the High preset. Rest assured, the Aspire 7 can crunch through most users’ gaming and work needs admirably.

The Acer Aspire 7 has a lot going for it and the laptop can double up as both, work as well as a gaming companion. The icing on the cake is that the company has priced its latest offering quite competitively, and the unit starts at Rs 62,999 in India for the base variant which comes with 8GB of LPDDR4 memory. Add to that the unit’s sturdy design, capable performance and spacious keyboard deck with backlit LEDs and the brand just might have a winner on its hands. You can buy the portable from Acer’s online store here.