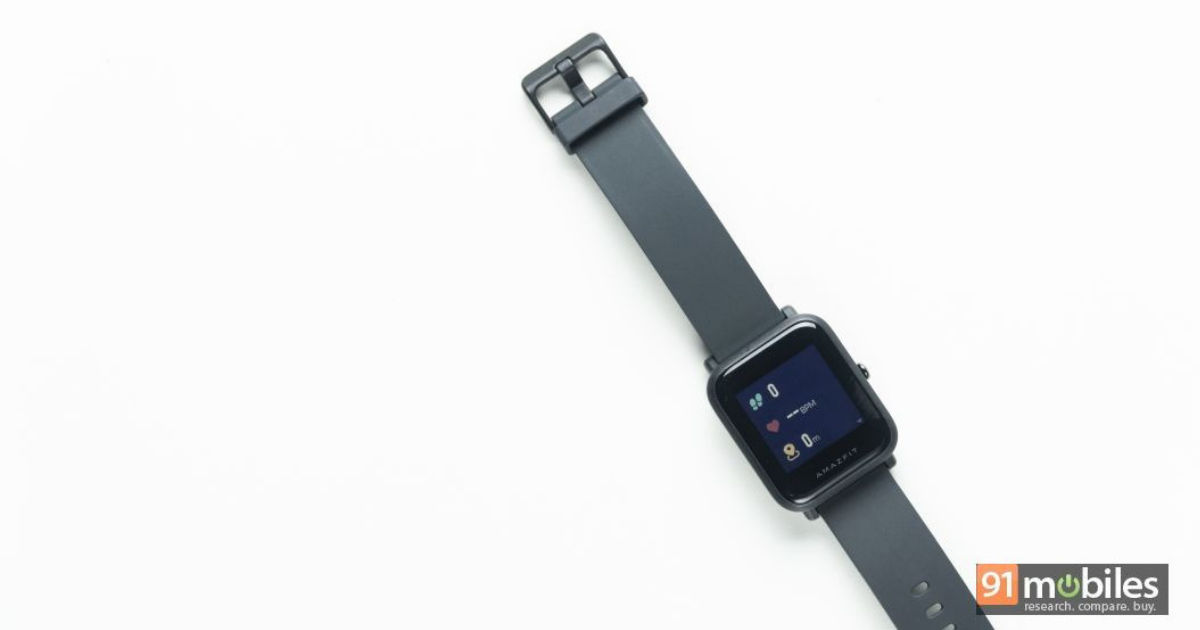 It’s Sunday morning. I’ve been procrastinating packing for my trip to Taiwan for several days. In a fit of panic, I forget to pack the charger of the Amazfit Bip Lite smartwatch. At the time, the wearable had fifty percent juice left. When I returned nine days later, the watch was still running, with two percent battery left to spare. And that’s precisely why I feel Amazfit’s latest concoction is worth a buy. The Bip Lite is a functional fitness tracker which packs a wallop in the battery department. It’s not perfect, but for all intents and purposes, it’ll stay strapped to my wrist for a long, long time. To know more about Huami’s latest wearable, read on.

The adage ‘don’t use a lot where little will do’ best describes the Amazefit Bip Lite. The smartwatch has been constructed in entirety using plastic and from a distance, looks like a knockoff Apple watch. That said, the Bip Lite is incredibly light on the wrist and is superbly comfortable to wear over extended periods, which is of paramount importance whilst working out. Moreover, despite its plastic shell, the Bip Lite doesn’t feel cheap or flimsy. In fact, the watch didn’t have any loose edges, and the crown felt satisfactorily tactile too. 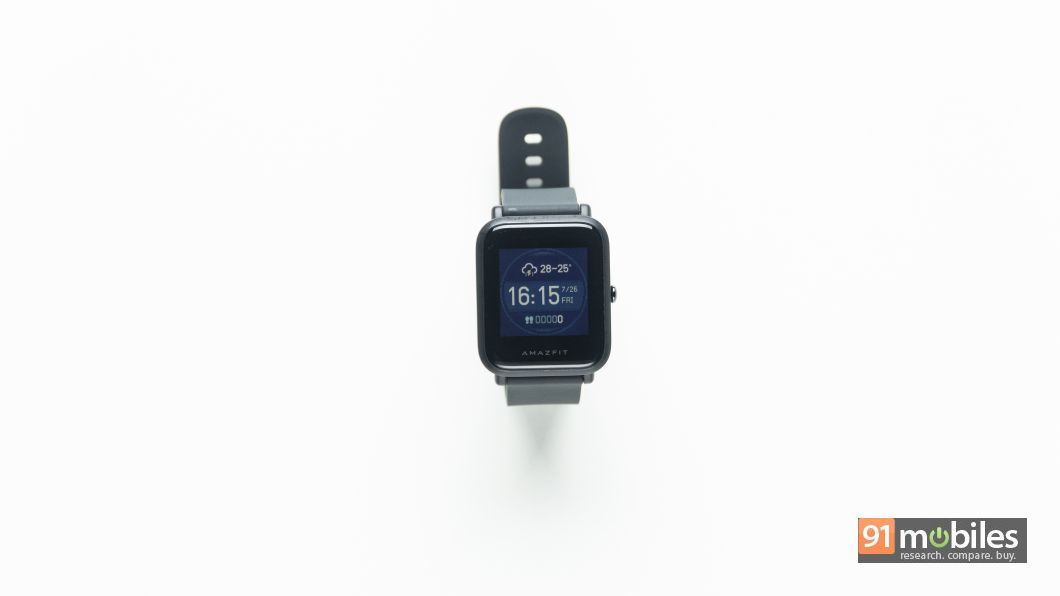 Moreover, I’m a sucker for minimalism and the Bip Lite took no time to woo me with its simplistic design. I could even dress the smartwatch up or down, depending on the occasion, which is great. Furthermore, the smartwatch ships with user-replaceable straps, so if you want to spruce up the looks of your Bip Lite, you can do so easily.

I absolutely love the Bip Lite’s transflective screen too. For the uninitiated, the Bip Lite’s display works best when it’s bright and sunny outdoors as it can transmit and reflects light back. The panel even comes with a built-in backlight which can be tweaked per your liking to illuminate the screen when it’s dark, along with an always-on mode which ensures you can keep a tab on your step count and the time without having to wake the display by pressing a button or raising your wrist every time. 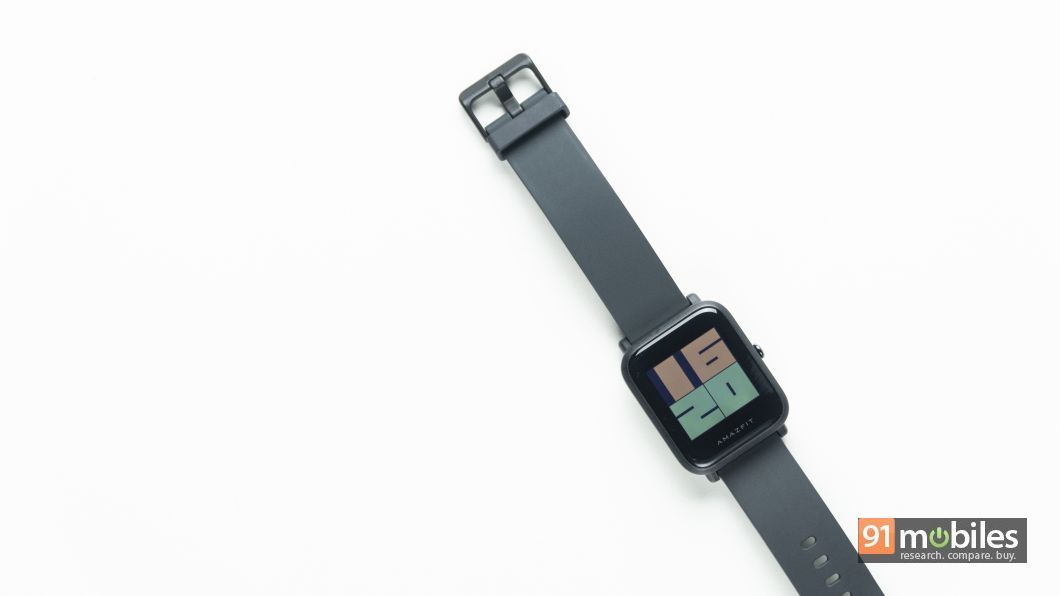 As for the specs, the display measures in at 1.28 inches and boasts a resolution of 176 x 176 pixels, which isn’t as sharp as the one on the company’s Pace model I reviewed a while back. However, seeing how you can’t run any graphically rich media on the device in the first place, the panel sufficed for my usage and needs. 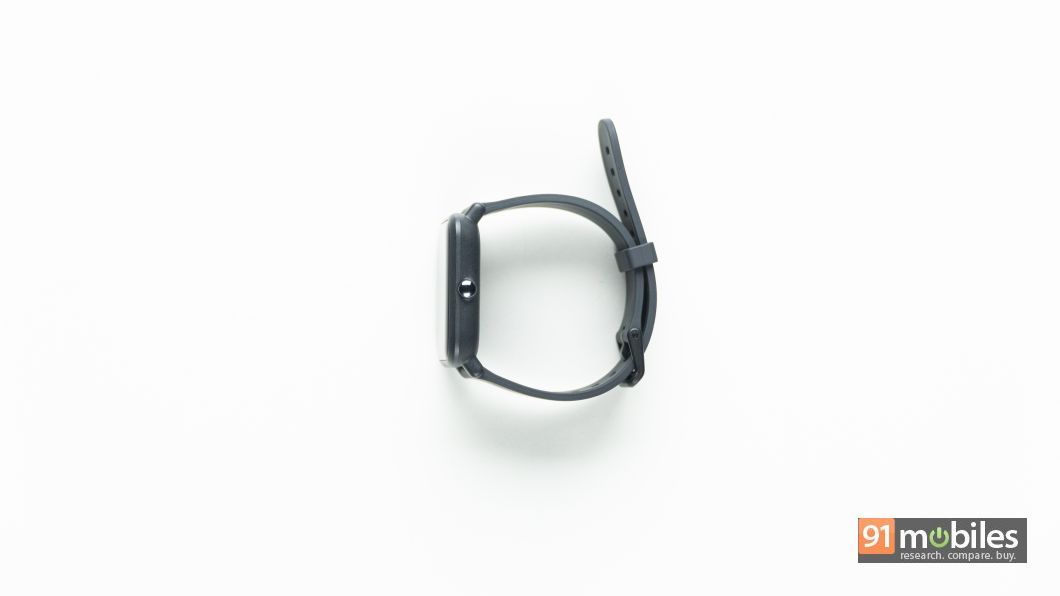 Thankfully, unlike other budget smartwatches, the display on the Amazfit Bip Lite is extremely responsive to the touch. Consequently, I didn’t face any issues navigating through the watch’s OS or interacting with different built-in applications.

Despite its wallet-friendly price tag, the Amazfit Bip Lite ships with a ton of useful features which are advantageous to both, seasoned athletes and the average joe. The smartwatch connects to Android and iOS devices via Bluetooth v4.1 and once paired to the phone, can help you track your runs outdoors as well as on a treadmill, your daily steps as well as give insights on your cycling activities. Now, bear in mind that the watch needs to be paired to the phone in order to use the built-in cycling app, as it uses the smartphone’s GPS to track routes. 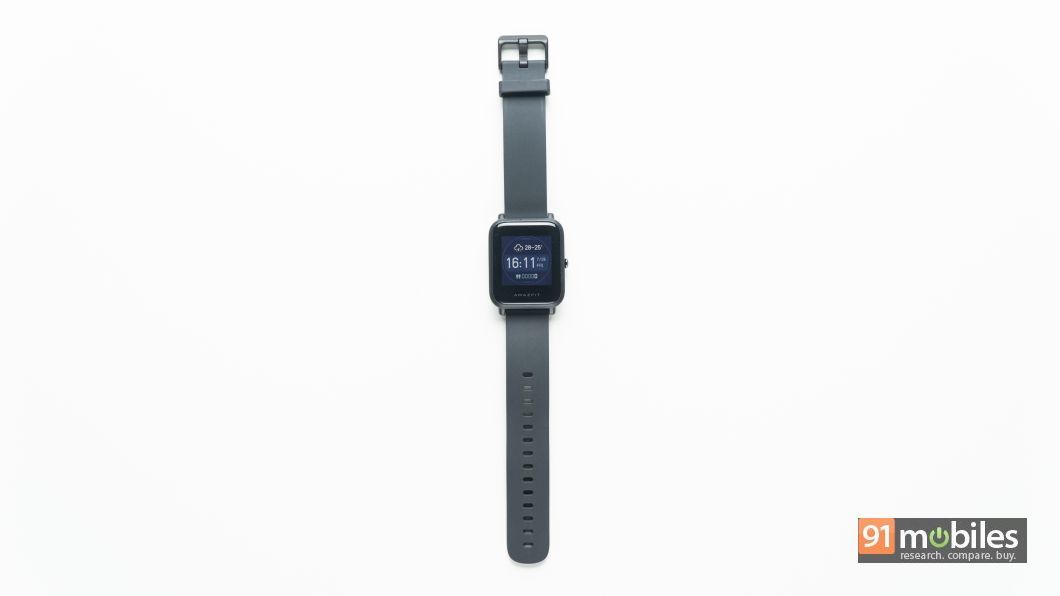 That’s a bit of a bummer since I couldn’t take my OnePlus 7 Pro with me during turbulent Delhi rains as the smartphone isn’t IP certified. But, barring that, the Amazfit Bip Lite didn’t give me any other reason to complain. The smartwatch tracked steps accurately, and it didn’t factor in ghost steps, which is quite nice. The Bip Lite also measured my heart rate with a good degree of precision, but there’s no way to manually measure your heart rate. On the contrary, the smartwatch automatically detects the heart rate after some time has lapsed, say after every five minutes.

Interestingly, the Bip Lite also calculated the heart rate of inanimate objects. But, seeing how the wearable showcased accurate ‘beats per minute’ figures when it was slapped around my wrist, I’m willing to let this slide.

Now, although the Bip Lite doesn’t come with built-in GPS, it did lock on to the signal from my phone in a jiffy. So, you’ll be able to map your runs easily with the watch and view the results on your smartphone using the companion app. Unfortunately, once you start an activity, you’ll have to wait for it to end in order to use other features of the watch. What’s more, the smartwatch doesn’t feature music controls either, so you’ll have to use your earphone’s in-line remote or the phone itself to shuffle between tracks.

Much like most other wearables, the Amazfit Bip Lite syncs with a companion app, and in this case it’s the Mi Fit app, the same one that works with Xiaomi’s Mi Bands. The app features a minimalistic UI and when opened, presents you with your core stats front and centre. You can then navigate your way around to the wearable’s settings, from where you can change the Bip Lite’s watch face, add alarms, choose which apps can send push notifications to the smartwatch and much more. I’d also like to point out that you’ll need the app to update the firmware of the Amazfit Bip Lite too. 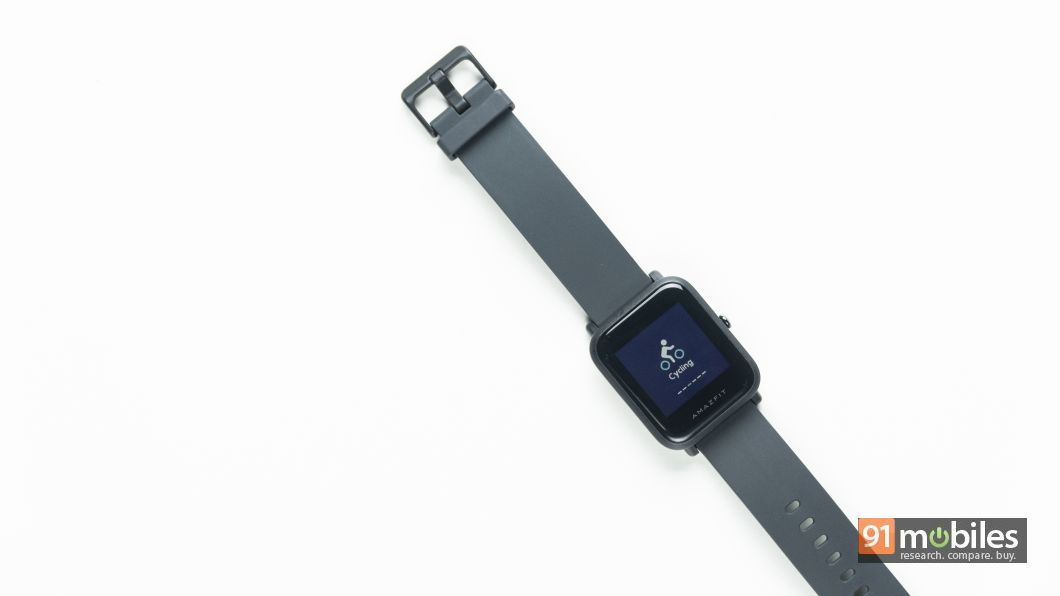 The star of the show is undoubtedly the Bip Lite’s battery life as the watch can last for weeks on end without requiring a top up. The company claims that the smartwatch can last for up to 45 days, and while that might seem farfetched, my experience with the wearable aligns with the Amazfit’s claims. In fact, as of writing this review, my review unit of the Bip Lite is at 73 percent charge level, and I haven’t plugged it in for a week. What’s even more fascinating is that I’ve had notifications enabled throughout my review period, and I’ve even set the watch to monitor my heart rate every five minutes. Suffice it to say, try as I might, I could not exhaust the cells inside the Amazfit Bip Lite. 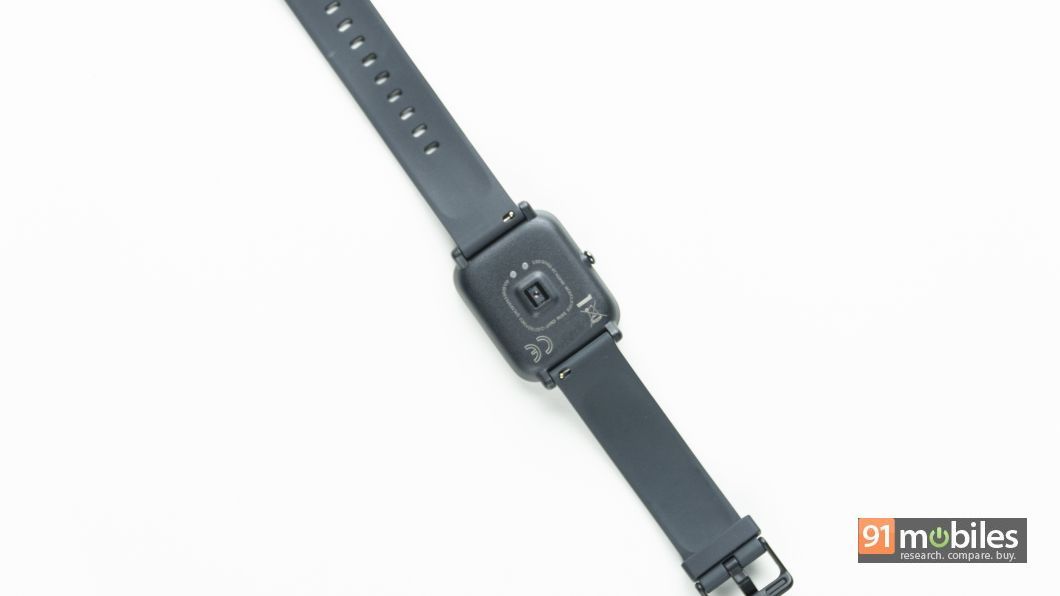 As for notifications, the Amazfit Bip received notifications from my preferred app seamlessly. You can even scroll through different notifications on the smartwatch’s display by swiping up on the main screen. Unfortunately, there’s no option to reply to said notifications through the watch, which is a bummer.

The Amazfit Bip Lite retails for Rs 3,999 in India and for the price, is an absolute steal. The smartwatch gets the basics right by offering precise movement tracking, a comfortable design, and class-leading battery life. While I would’ve liked more granular control over notifications, along with the option to shuffle through my playlists from within the watch’s interface, the Bip Lite is undoubtedly among the best affordable fitness-based smartwatches I’ve reviewed. Rest assured, if you are in the market for a no-nonsense fitness wearable which doesn’t burn a hole in your wallet, the Bip Lite is your best bet.

Amazfit Bip U launched in India with 9 days battery life and 60+ sports mode, priced at Rs 3,999