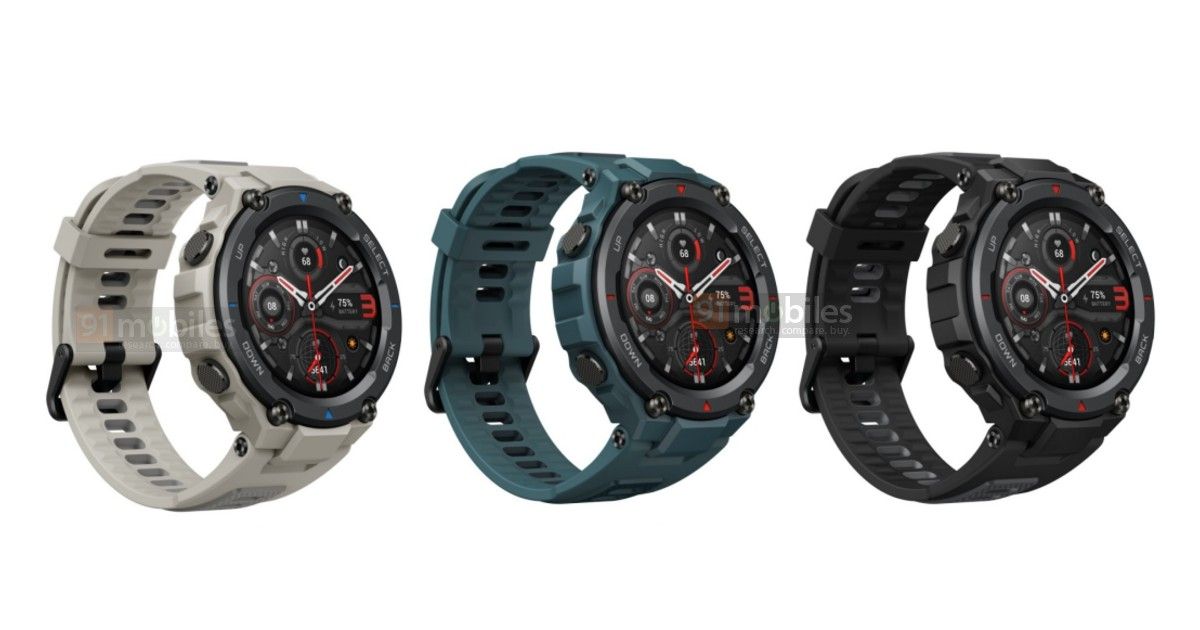 Amazfit T-Rex Pro could be the new smartwatch from the house of Huami. The renders and specifications of the upcoming wearable have been tipped to 91mobiles by reliable Indian tipster Sudhanshu. The Amazfit T-Rex Pro will be the follow-up of the regular Amazfit T-Rex that was launched last year. As per the images, the new ‘Pro’ model will tout the same design and form factor as its predecessor. That said, the watch will be more durable than ever. The Amazfit T-Rex Pro specs sheet reveals that it’ll be 10ATM certified and can survive underwater for up to 100 meters instead of 50 meters with 5ATM rating. Additionally, the watch will come with a new operating system and colour options. Take a look at the watch’s design below.

The Amazfit T-Rex specifications are said to include a 1.3-inch AMOLED Touchscreen display with 360x360p resolution and corning gorilla glass. The glass will bear a tempered layer and anti-fingerprint coating atop. The watch will have built-in GPS+GLONASS, GPS+BeiDuo, and GPS+Galileo navigation system. As for the sensors, the wearable will pack BioTracker 2 PPG optical sensor for heart-rate tracking, 3-axis acceleration sensor, 3-axis gyroscope sensor, geomagnetic sensor, ambient light sensor, and barometric altimeter.

The Amazfit T-Rex Pro will be driven by a 390mAh battery that is likely to have 90 minutes of charging time using a magnetic 2-pin pogo charger. The watch is rated to last up to 18 hours with typical usage, 9 hours with demanding usage, and 40 hours with continuation usage and GPS. The watch will run RTOS out of the box and support devices running Android 5.0 and iOS 10.0 and above with a compatible app called Zepp app. The device will make use of Bluetooth 5.0 BLE for wireless pairing.

The Amazfit T-Rex Pro will also tout a polycarbonate body with silicone straps and buttons around the edges for navigation. The watch, as stated above, will have 10ATM certified. It’ll measure 47.7mm x 47.7mm x 13.5mm and weigh 59.4 grams (with straps). The wearable will go on sale in three colour options: black, green, and gray. The only piece that is missing from the puzzle right now is the Amazfit T-Rex Pro price in India.