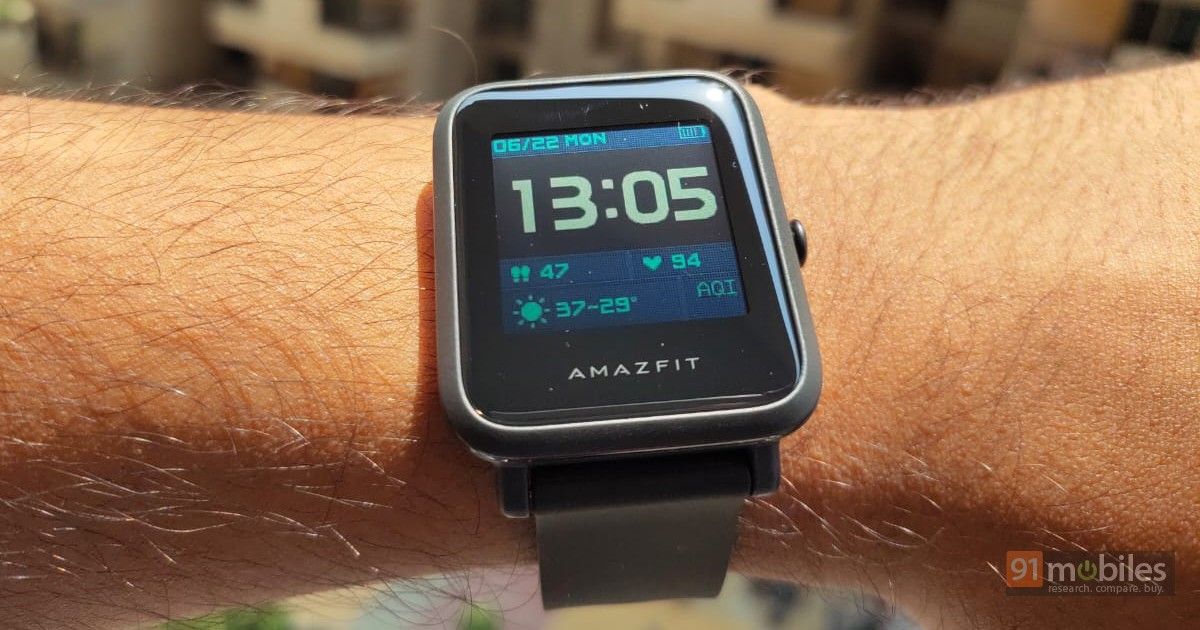 Amazfit Bip S is the latest sub-Rs 5,000 wearable from Huami, the company that also makes the ultra-popular Mi Band, in India. The smartwatch, as the company likes to call it, is a refreshed version of the original Amazfit Bip that was launched in the country back in 2018. The Amazfit Bip S comes with a slew of under-the-hood improvements instead of a complete design overhaul. The wearable claims 40 days of battery life on a single charge, touts improved water resistance rating, and 40+ customisable watch faces. In addition to that, the Amazfit Bip S features as many as 10 sports modes for different kind of activities and Pai health assessment system. Are these reasons enough to buy the Amazfit Bip S? Read on to find out. 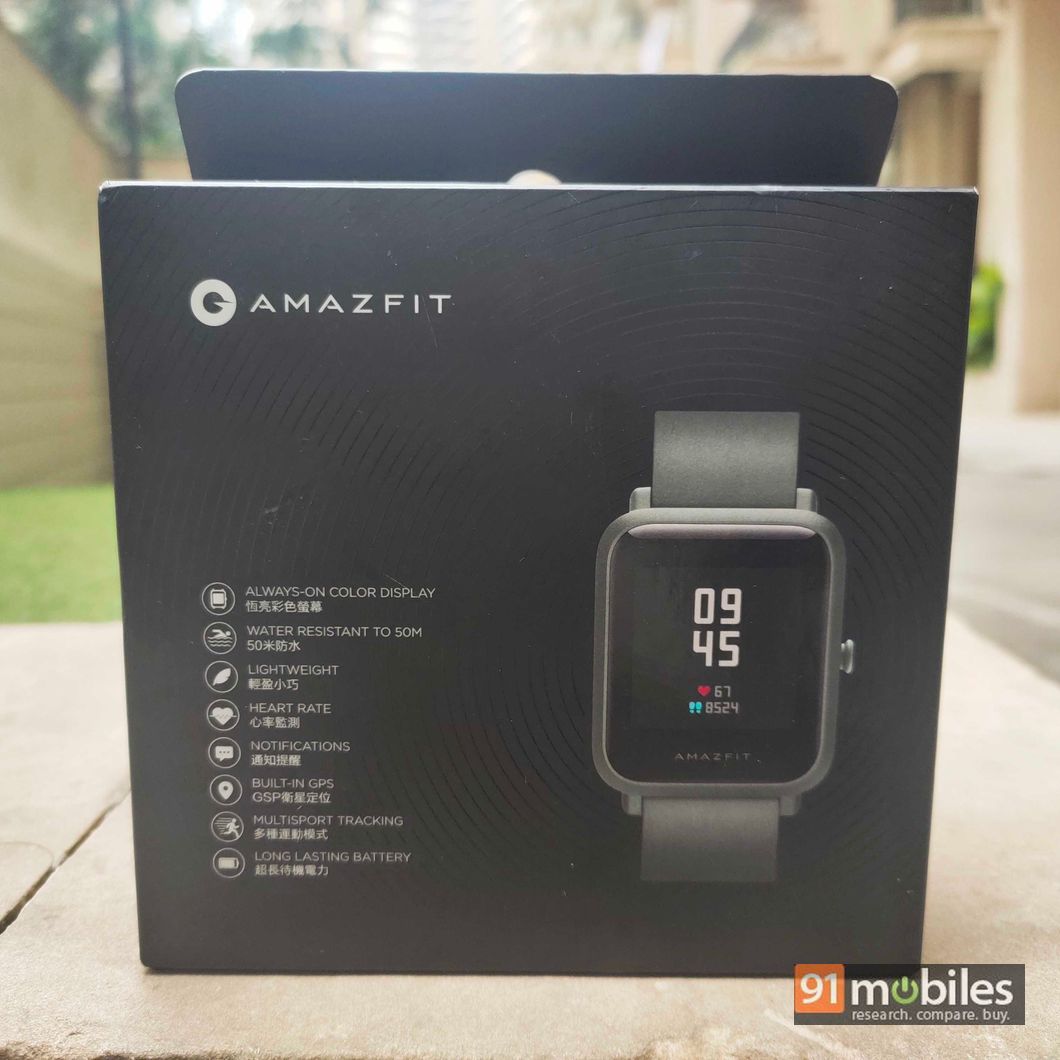 The Amazfit Bip S is a compelling fitness tracker for its sticker price of Rs 4,999. The wearable can accurately track data, offers a great battery life, a comfortable fit, and a good level of water resistance. However, calling it a smartwatch is a bit of a stretch, as the Bip S can’t run third-party apps, or let one send messages.

The Amazfit Bip S has a lightweight design and comfortable fit, and can be worn to bed for sleep tracking without discomfort. The watch tips the scales at 31.8 grams, and has the same squarish form factor that’s reminiscent to Apple Watch series as its predecessor. It’s accompanied by 20mm silicone straps, which are user-replaceable and can be swapped with other compatible bands of the same width. There is a physical button on the right spine of the Amazfit Bip S that doesn’t protrude from the watch much to bite the wrist, and is yet satisfactorily tactile. The button can be used to wake up the screen, go back, or jump to the home screen, among other things. 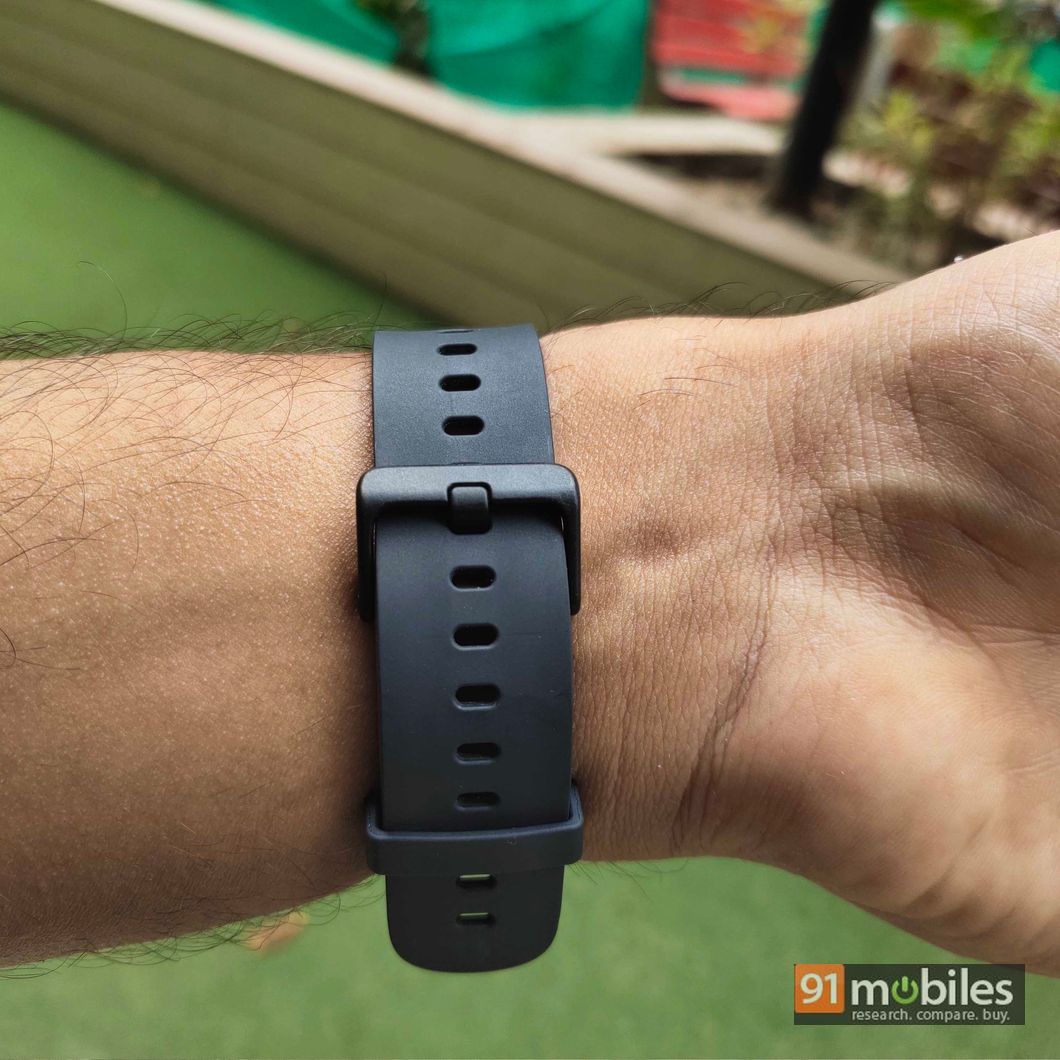 The core of the Amazfit Bip S houses a 1.28-inch Transflective touchscreen colour TFT display with 2.5D Corning Gorilla Glass, and oleophobic coating that manages to keep fingerprints and smudges at bay to some extent. It’s an always-on display, which means you won’t have to wake the screen every time to view the date, time, and other stats that are available on the home screen. The screen disables itself after a couple of seconds to prevent accidental touches. The display has good readability in bright environments and direct sunlight, thanks to the transflective panel. 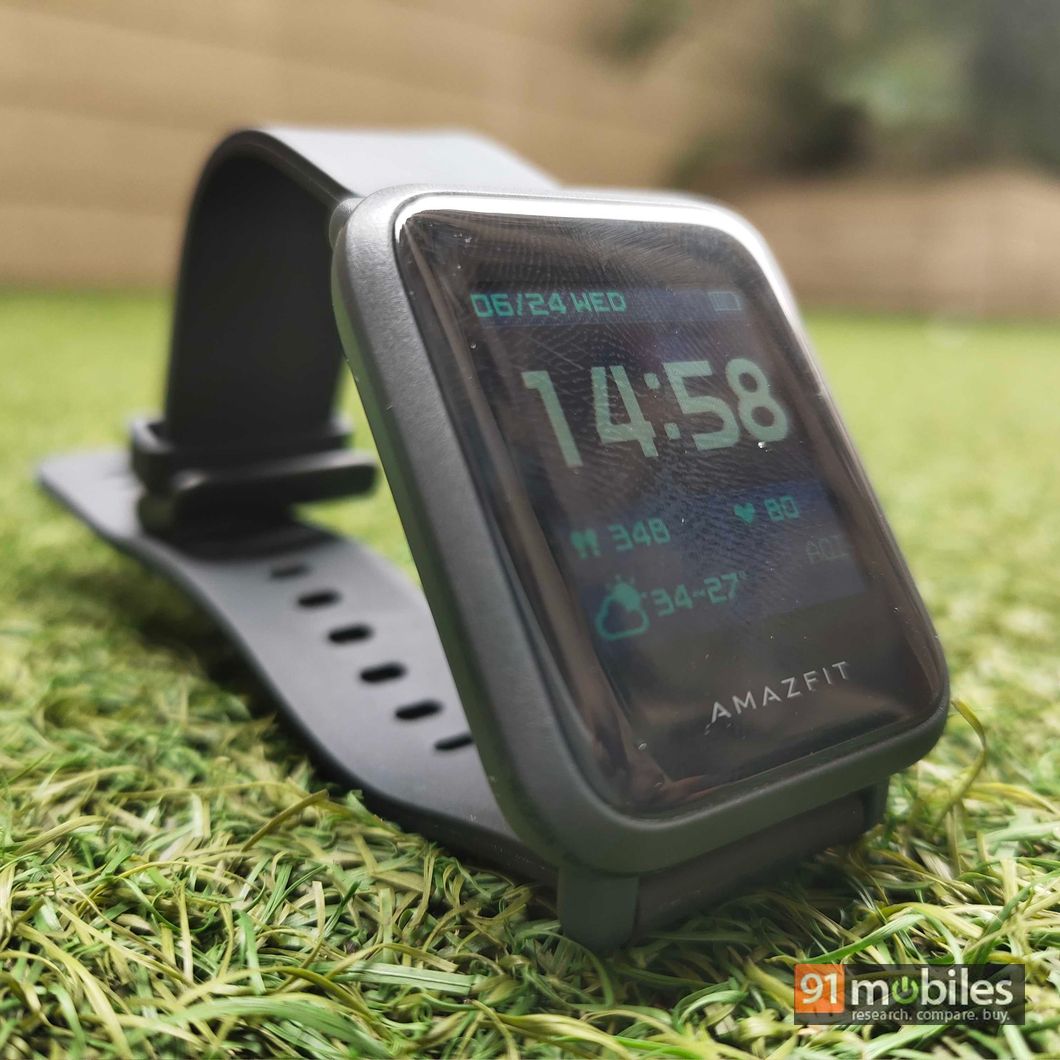 At the back, the Amazfit Bip S has a heart-rate sensor and two pogo pins for charging. We were quite impressed by the wearable’s heart rate tracking at regular intervals. You can also set the frequency of heart rate detection to every minute, 5 minutes, 10 minutes, and 30 minutes or completely disable the monitoring. The other features of the Bip S are pedometer and built-in GPS. The watch houses a Sony 28mm chip that accurately detects the user’s location. It takes a few minutes to lock-in, but works just fine for tracking runs and walks. The step count of Bip S was on par with Huawei GT Watch 2, which has been priced in India at Rs 14,990. 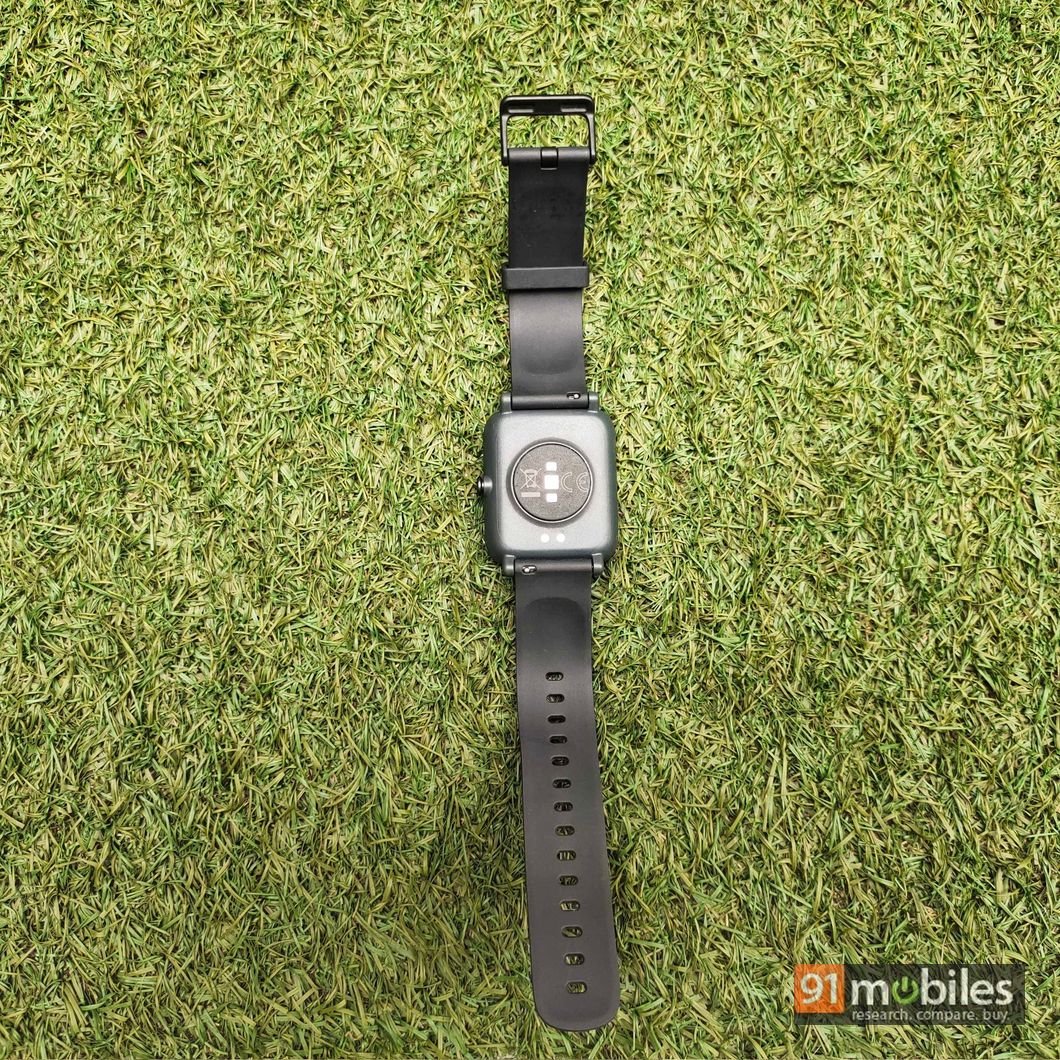 Additionally, the watch has 10 different sports modes, including treadmill, outdoor running, walking, indoor cycling, outdoor cycling, open water, pool, yoga, elliptical trainer, and freestyle. The Bip S records the wearer’s heart rate constantly during these modes. It also records your sleep data, which we found to be fairly accurate. The sleep monitor shows the total number of hours of sleep with deep sleep, light sleep and time awake data. The Amazfit Bip S is 5ATM certified, which means it can survive pressure equivalent to about 50 meters underwater. Unfortunately, we couldn’t put that claim to test. 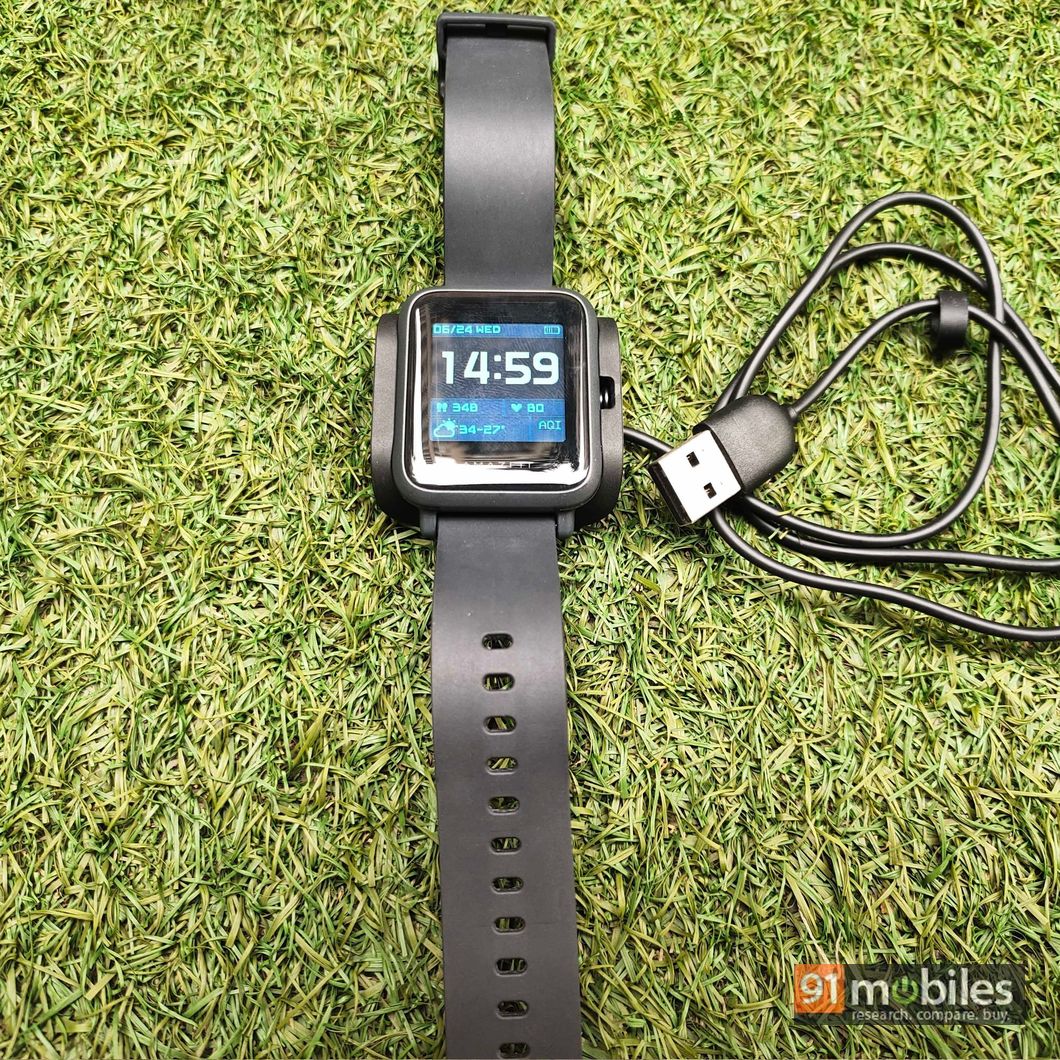 The star of Amazfit Bip S, however, is its 200mAh battery. Huami claims that the wearable can last up to 40 days with basic settings on a single charge, and we can vouch for that. We’ve been using the Bip S as our daily driver for the last 10 days, and it still has 68 percent battery remaining. This after when all the notifications were turned on, brightness set at 100 percent for most of the time, and sporadic usage of GPS. The wearable can be recharged using a proprietary magnetic charger that takes its own time to recharge. While charging the watch, you won’t be able to use it, but you do get the notifications. Speaking of which, Amazfit Bip S received notifications from my preferred app seamlessly. You will be notified with vibrations, which is strong enough to even wake you up from sleep in case of an alarm. In addition to that, the Bip S comes with the ability to control music from a smartphone and set customisable watch faces directly from the watch. There are five watch faces by default, and you can add more via the companion Amazfit app. The home screen of the Amazfit Bip S shows date, time, and battery, among other things – depending on the watch face you chose, while swiping left or right will allow you to see stats of your health. The swipe down gesture includes DND, brightness, lock screen, and music options, whereas the swipe up stacks all the new notifications. The power button of the watch features additional options such as workout and settings.

That said, the Amazfit Bip S has painful app connectivity, poor UI, and average display. The wearable has built-in Bluetooth v5.0 that helps it pair with Android 5 or iOS 10 and above devices seamlessly using the Amazfit app. The app has a minimalistic UI and when opened, presents you with your core stats front and centre. However, it takes its own time to sync data from the watch. This is despite an active Bluetooth connection. The app also pushes out the update for the watch at a random time without any notification, rendering the app and the watch useless for the duration. 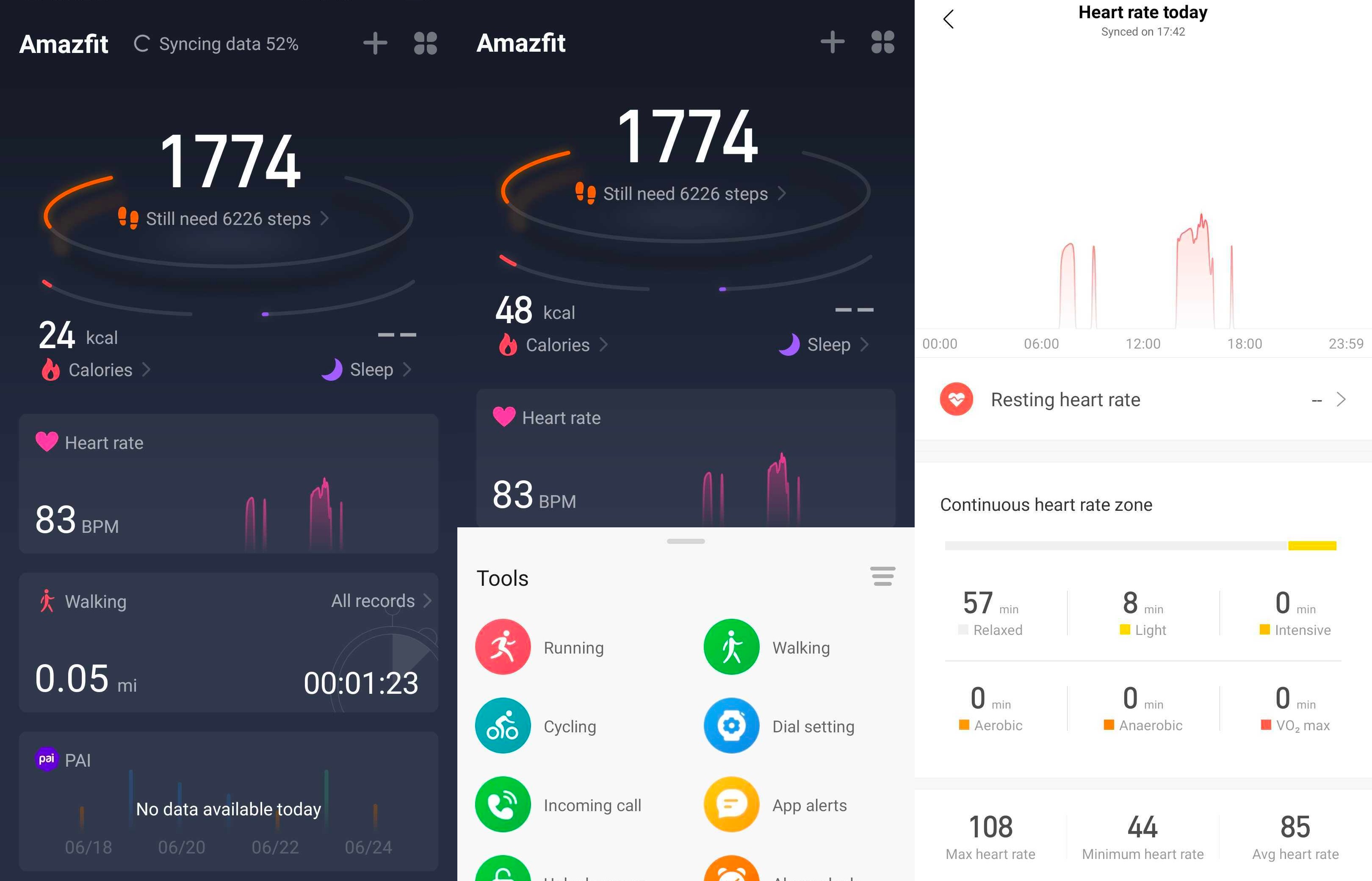 The UI also impacts the usage of Amazfit Bip S. For instance, you can’t control music or jump to the home screen or receive notifications on the Bip S during a workout session, as the UI locks the screen to the workout until you end it. The watch has five shortcuts: music, status, PAI, heart rate, and weather, which you can access by swiping left/ right on the screen. While these shortcuts can be hidden from the app, there is no option to add a new one, which is a bummer. 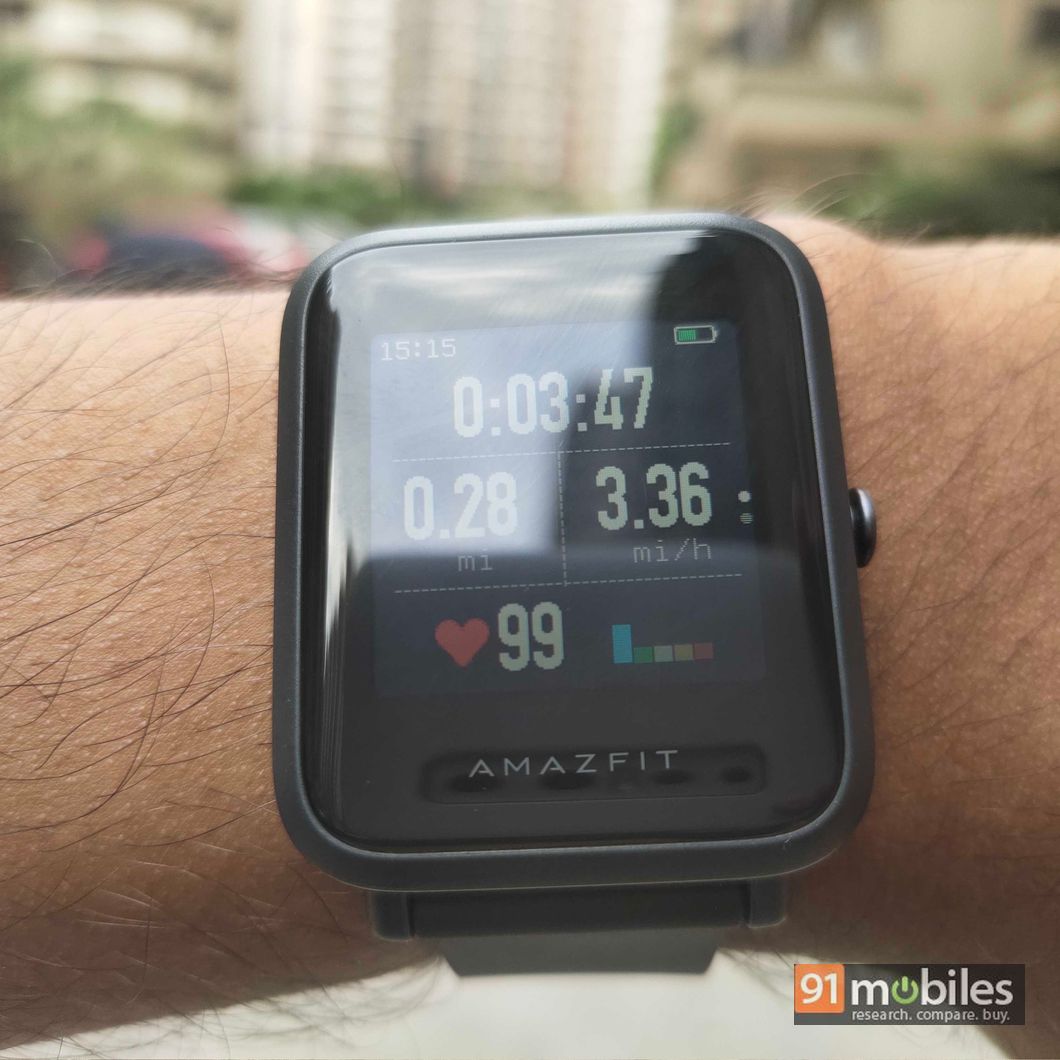 Another drawback of Amazfit Bip S is its display. The wearable has a low-res 176p screen with wide bezels all around and ‘Amazfit’ branding plastered at the bottom bezel. The watch also has a slightly reflective display, which makes viewing a bit difficult at times, and the Always-on feature is not bright enough to be viewed in low light.

You can’t go wrong with Amazfit Bip S if you’re looking for a fitness tracker under Rs 5,000. As stated above, the wearable is sturdy, lightweight, and can accurately track wearer’s heart rate, steps walked, and sleep. It even features built-in GPS, and offers an impressive water-resistant rating. The display of the watch, though a bit reflective and lacking a modern bezel-less design, has good outdoor visibility. Having said that, there are a few issues with the Amazfit Bip S app and UI, which can hopefully be taken care with an OTA update in the future. Until then, we’re counting them as drawbacks.

The closest competition to Amazfit Bip S is the Realme Watch. We’re yet to review it, but the wearable looks compelling owing to the slightly bigger display, SpO2 monitor that measures the oxygen level in the blood, and the attractive Rs 3,999 price.