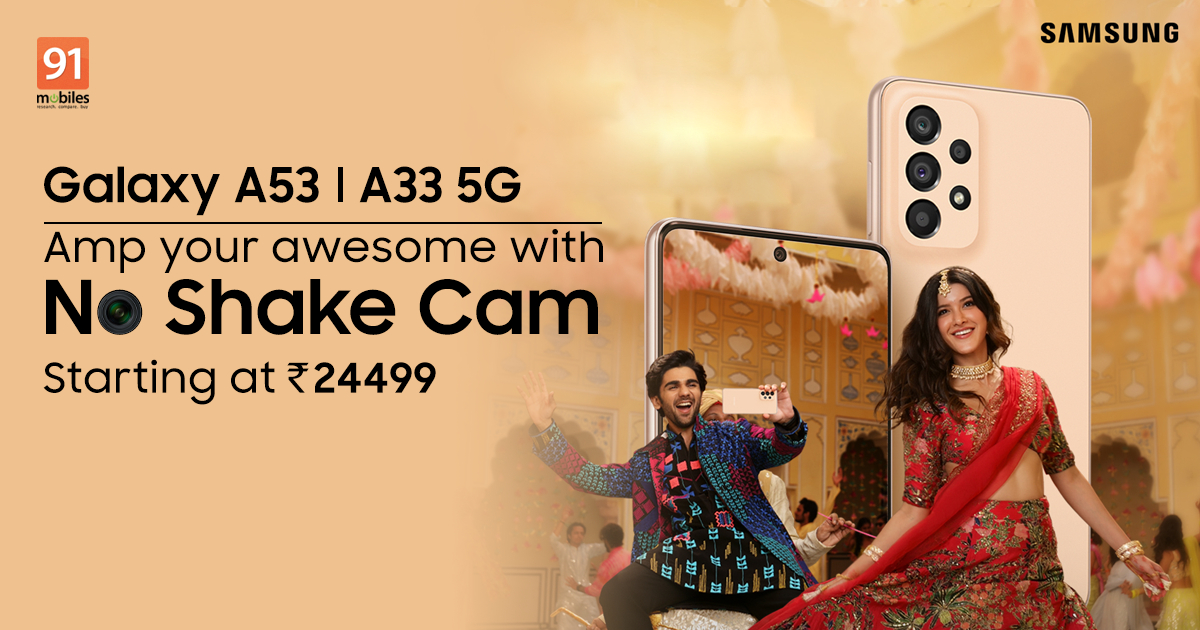 When it comes to innovations in smartphones, Samsung has always been at the forefront. Further, it is crazy to look at how fast these innovations make their way from the brand’s flagship offerings to mid-range phones and beyond. The company has been perfecting the video stabilisation offered on its phones over the years and the proof of this perfection is the ‘No Shake Cam’ feature that can be found on the Galaxy A73 5G, Galaxy A53 5G, Galaxy A33 5G, and Galaxy A23. The cameras of all these phones are equipped with OIS for effectively removing shakes from all your videos, giving you footage that looks stable and professional-grade.

Not just that, the No Shake Cam attribute of all these phones also ensures that your photographs don’t come out blurry. Notably, the stabilisation comes incredibly handy when you’re shooting indoors or in low-light scenarios.

The No Shake Cam advantage

As Gen Z users shoot videos on smartphones in all kinds of creative ways, there is always a risk that a brilliant moment can be ruined due to a blurry clip. Even minor shakes can often spoil great videos and this can be the difference between a video that goes viral and the one that just leaves you shaking your head. This is perhaps what inspired Samsung to come up with No Shake Cam. Whether it’s footage of your travel vlogs, your all-important wedding dance, or anything else, this feature has been introduced to safely capture the best moments in your life. In fact, as this feature is extremely effective and useful, once you use the OIS-aided ‘No Shake Cam’ advantage of the Samsung Galaxy A series smartphones, you will never be able to switch to another phone that doesn’t have this stabilisation feature.

It is something that’s brilliantly showcased in the new digital film launched by the company, which features influencers Shanaya Kapoor and Prit Kamani. Arriving as the bride, Shanaya breaks into her dance moves and Prit can be seen capturing the entire performance on his Samsung Galaxy A series handset. As Prit is enjoying and having fun while holding the phone to record the video, Shanaya can be seen worried as she thinks this would lead to shaky footage. But she is pleasantly surprised to learn the videos turned out great.

What’s fascinating is that the digital film clearly shows the OIS at work inside the phone. The phone takes the help of multiple sensors to identify the directions in which the phone is being moved by the user. The sensor then physically moves around to compensate for those movements, thus offering shake-free footage. The tagline at the end of the video, “You can shake. Your videos won’t,” aptly captures the gist of the No Shake Cam advantage.

Another feature that makes Galaxy A series handsets an impeccable buy is the IP67 water and dust resistance rating. Samsung Galaxy A73 5G, Galaxy A53 5G, and Galaxy A33 5G come with this rating and can stand up to 1-meter of freshwater for up to 30 minutes. This means that you can carry these phones near a pool or to a beach without worrying about sand or water splashes.

The brilliant Galaxy A Series

As Samsung rightly puts it, the Galaxy A Series is ‘Galaxy innovation made accessible for all.’ Everything from high refresh rate AMOLED displays to high-end camera sensors, cutting-edge processors, and features like No Shake Cam can all be found in these devices. As a part of the festive offers, Samsung is offering great discounts on both Galaxy A53 5G and Galaxy 33 5G.

The pricing for these phones as part of these festive offers starts at just Rs 24,499, with an instant cashback offer and easy EMI options through Samsung Finance+. On top of this, with the purchase, you also get a 50 percent discount on Galaxy Buds2, which are currently priced at Rs 6,290.

As is showcased in the digital film featuring Shanaya and Prit, the No Shake Cam advantage offered by the Samsung Galaxy A Series is ideal for making your videos social media-worthy. With these smartphones, you can fully enjoy the precious moments in your life without worrying about the quality of videos. So overall, we can say that the ‘No Shake Cam’ feature doesn’t just eliminate the shakes but your worries about blurry and shaky videos as well. Experience this amazing feature by grabbing a Galaxy A series smartphone and there can never be a better time to pull the trigger as festive offers have made these phones even more lucrative than ever.
ShareTweetShare
Follow Us
Related Articles