Getting the right mix of powerful gaming capability and portability in a laptop isn’t an easy task. Taiwanese electronics giant ASUS, however, came up with the perfect solution in the form of its ROG Zephyrus G14 (review) laptop last year. Apart from packing extreme internals, the device exuded trendy looks to appease gamers while keeping the chassis remarkably lightweight. This year ASUS has added to the winning formula with some key upgrades in the display department which makes the whole package even more appealing. The Zephyrus G14 2021 I’ve received for review comes with AMD’s Ryzen 9 5900HS CPU and NVIDIA’s RTX 3060 GPU, and will set you back by Rs 1,57,990. Let’s find out how well this new G14 fares as a gaming machine while also functioning as a handy mobile workstation. 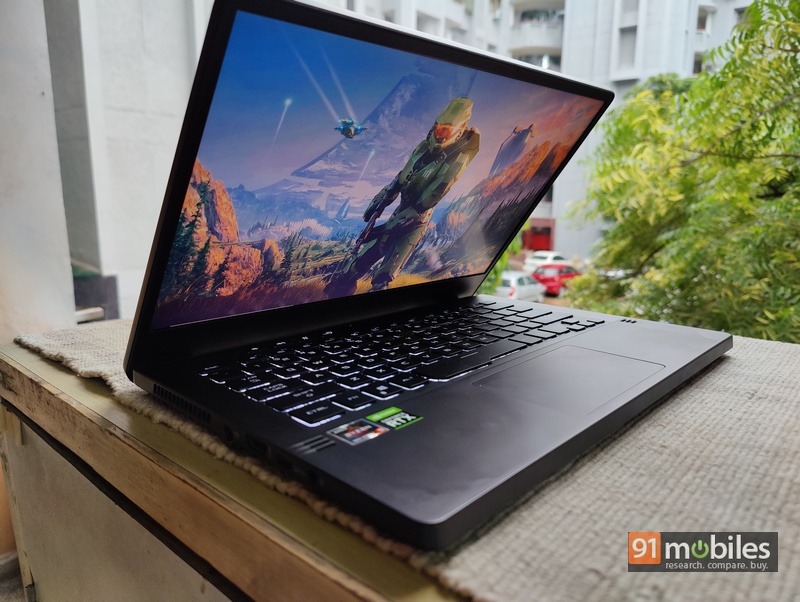 The basic design of the Zephyrus G14 has not been altered at all, which makes sense since the original was more or less perfect in this aspect. However, I do have issues with the webcam still being omitted in these times of video calls and work from home culture. The plastic chassis has blunt edges on all sides, providing an easy grip, and the palm rest doesn’t cut into my wrists. The Anime Matrix design present on the lid’s back makes its way onto the new G14 as well, and is still as customisable as ever to add that extra touch of gravitas to your usage. However, in terms of overall utility, the Anime Matrix serves no purpose and adds to the bulk of the device. Even so, the G14 weighs around 1.6kg and has just under 2cm of thickness, a rarity for gaming laptops… making it very easy to ferry around in your bag. The speakers are present just below the keyboard on either side and have been tuned for better audio performance as compared to last time. ASUS has implemented the very well-appreciated ergolift hinge design that enabled better airflow, thermals, and typing experience. The Moonlight White and Eclipse Grey colour options also make a return and I am very partial to the latter simply because the dark grey tones match so well with the keyboard’s white backlighting. 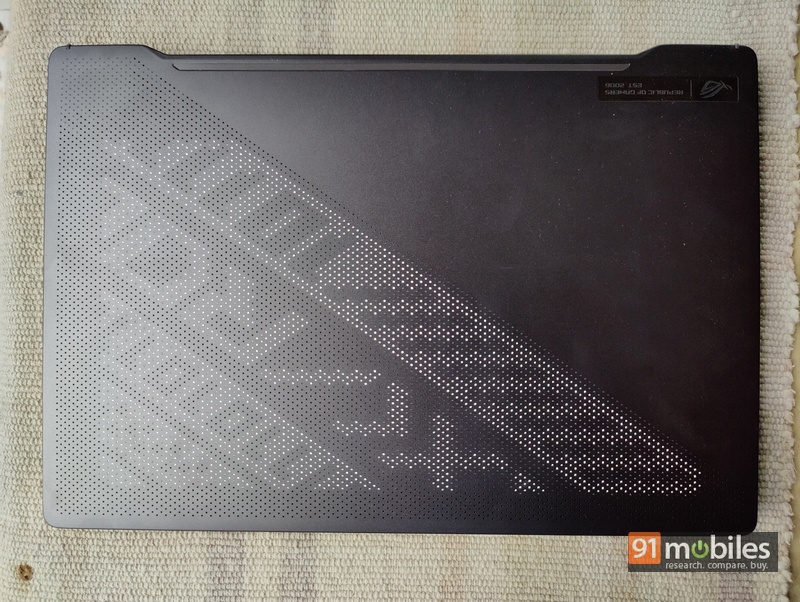 The usual connectivity options seen on the G14 from last year have returned for this year’s upgrade. There are Type-C USB 3.2 ports on either side (with the left one offering DisplayPort and Power delivery support), two Type-A USB 3.3 ports on the right along with one 3.5mm headphone jack, and an HDMI 2.0 port. There’s no ethernet port, but you do get Wi-Fi 6 capabilities along with Bluetooth 5.1. 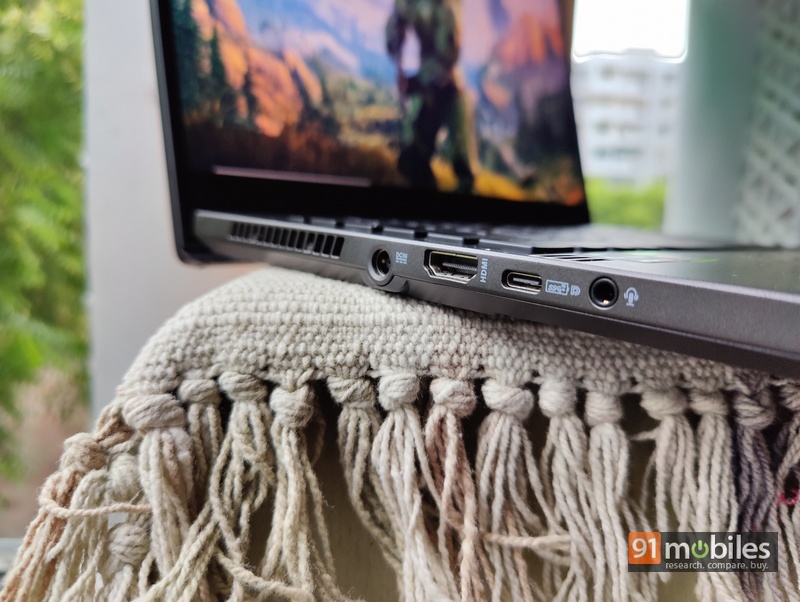 Asus has overhauled the G14’s display to accommodate a WQHD (2,560 x 1,440) panel that ramps up the refresh rate to 120Hz instead of 60Hz. For more hardcore gaming enthusiasts, there is a 1080p panel option as well with a 144Hz refresh rate. As far as colour accuracy goes, the previous ROG devices have not disappointed me and the 14-inch LCD of the 2021 G14 sports a reasonably high DCIP3 colour gamut coverage too. While the saturation was slightly on the higher side, the realism in Shadow of the Tomb Raider and the glaring visuals of Cyberpunk 2077 were executed perfectly. The anti-glare coating on the display does help in preventing reflections of light sources directly behind you. That being said, I was less impressed by the brightness of the panel which can hinder outdoor usage in bright sunny conditions. While the Zephyrus G14 is not the ideal machine for photo editing, gamers will be more than satisfied with the display quality. 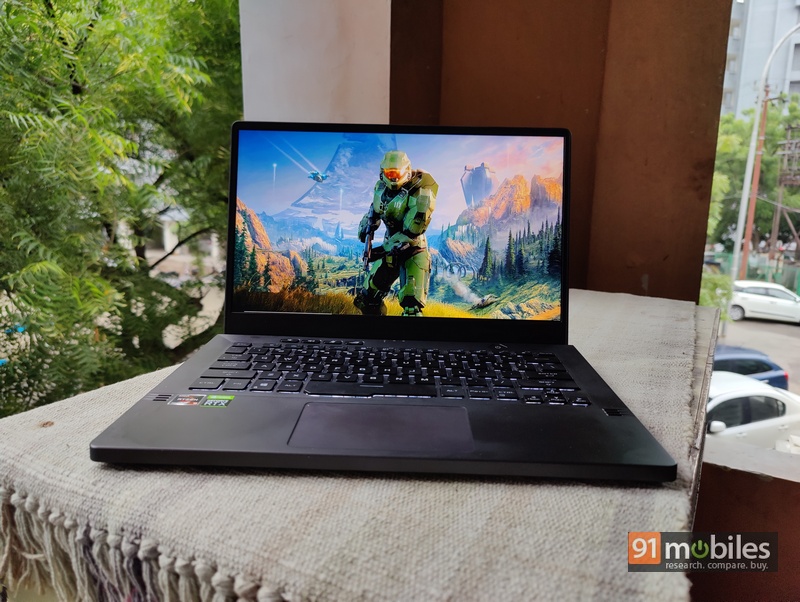 ASUS has kept the same keyboard as last year, offering a six-row chiclet-style arrangement of the keys with medium travel and white backlight. The keys are quite responsive and do not feel cramped at all. The hexagonal power button on the top is quite distinctive while four separate buttons are provided for the volume, mic control, and opening the ROG Armory crate. The arrow keys could’ve been made slightly bigger but since I rarely use them in the games I play, my complaints are limited. 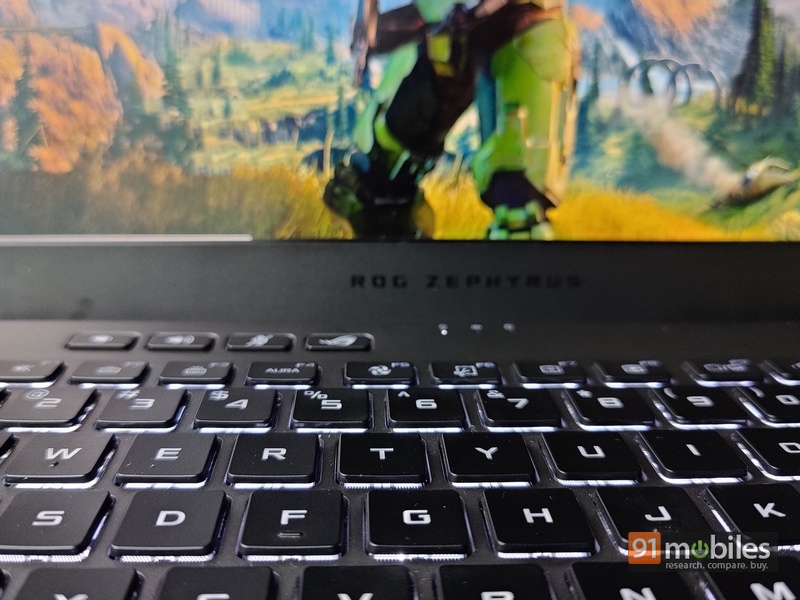 The trackpad does feel a bit small which could be a hindrance to users who are used to a wider surface area. Precision drivers allowed for easy multi-finger gestures and the latency is good enough for browsing through the internet or working with Microsoft Office. However, since the primary function of the G14 is for gaming, I would really recommend investing in a high-quality wired mouse. 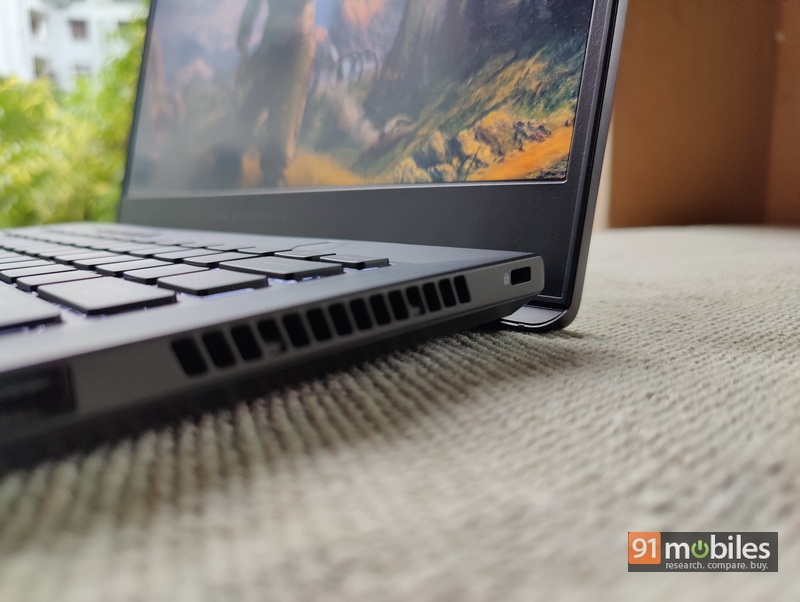 AMD’s Ryzen 9 5900H based on the new Zen 3 architecture leads the charge for all processor-intensive tasks on the Zephyrus G14. The octa-core CPU is perhaps the best chipset for the price and has a maximum clock speed of 4.6GHz along with 16 threads. Benchmark numbers paint a blazing fast picture for the Zephyrus G14 which had skipped on Intel’s silicone last year as well in favour of AMD. You can also check out our ASUS ROG Strix G15 review which also uses the same CPU. On Cinebench’s R23, the G14 scores a mind-boggling 12,159 on multi-core while the single-core result was 1,469. PCMark 10’s simulation of real-world usage returned a score of 6,558 which is very much in line with the current ROG lineups sporting the Ryzen 9 CPU. You also get 16GB of DDR4 RAM soldered in along with 1TB of PCIe SSD storage. CrystalDiskMark’s test for Sequential Read and Write speeds showed scores of 3,597MB/s and 3,088MB/s which are again excellent for the price. From these benchmark numbers, you can get an overall picture of the processing capabilities that encompass the G14. Handling normal user requirements ranging from multiple RAM-consuming Chrome tabs or operating Microsoft’s Office suite is going to be a piece of cake for this laptop.

As far as the graphical performance goes, NVIDIA’s RTX 3060 packs more than enough juice for most of your gaming needs. A word of caution, however. I would advise you to run all heavy-duty AAA games at FHD (1,080 x 1,920) settings only, as running at full WQHD resolution places the GPU under tremendous pressure. The Shadow of Tomb Raider benchmark outputted an average fps of 87 on FHD and High graphics settings. The same score for WQHD was 69fps. While in general, I did not notice any throttling, the base of the laptop does get considerably warm after extended usage. Ray tracing and NVIDIA’s DLSS will boost your visual experience but not all games support it. Cyberpunk 2077 gave a cool 64fps at High settings, with the fans running at full speed. Lower intensity titles like Call of Duty Warzone and Valorant ran without a hitch, but there was still the familiar problem of overheating. All-in-all, the Zephyrus G14’s thin chassis and limited vents can cause a thermal bottleneck, but the overall gaming performance is very much on par with other gaming-centric laptops in the same price range. The G14 also has two 2.5W regular speakers and two 0.7W tweeters which aren’t the loudest but offer incredible clarity and Dolby Atmos support. As far as software goes, ASUS’ Armory Crate allows you to fine-tune the performance of your CPU and GPU to your liking and also monitor thermals, clock speeds, and more while gaming. 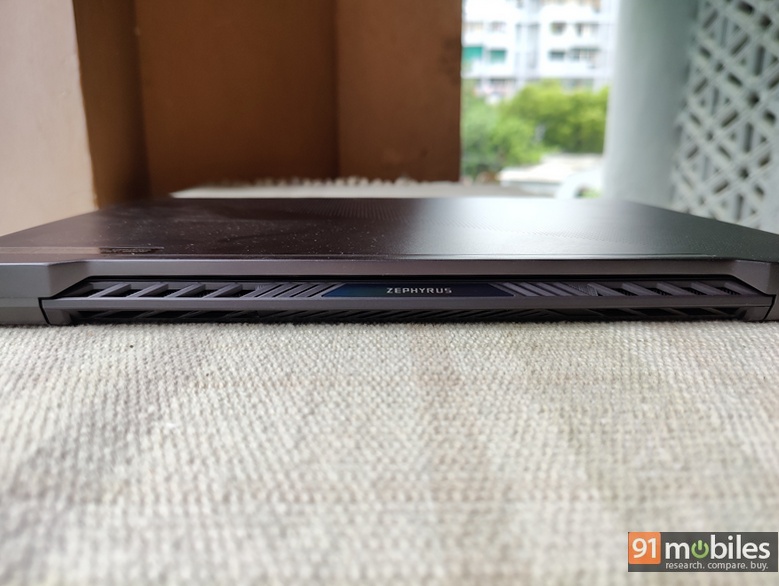 Last year’s Zephyrus G14 boasted astounding battery life, and this isn’t something you hear often when looking at gaming laptops. It claimed single charge use of 11 hours which is on par with Ultrabooks that have significantly weaker CPUs. The 76WHrs, 4-cell Li-ion Polymer battery on this year’s G14 is rated for 12 hours of usage. I began a regular workday at 100 percent battery, and by the end of about 7-8 hours, I was left with around 30 percent in the tank. Keep in mind that this was with the screen set at WQHD resolution and 120Hz refresh rate, which makes this quite impressive. Of course, from a gaming perspective, the laptop needs to be plugged into the power source for maximum efficiency. 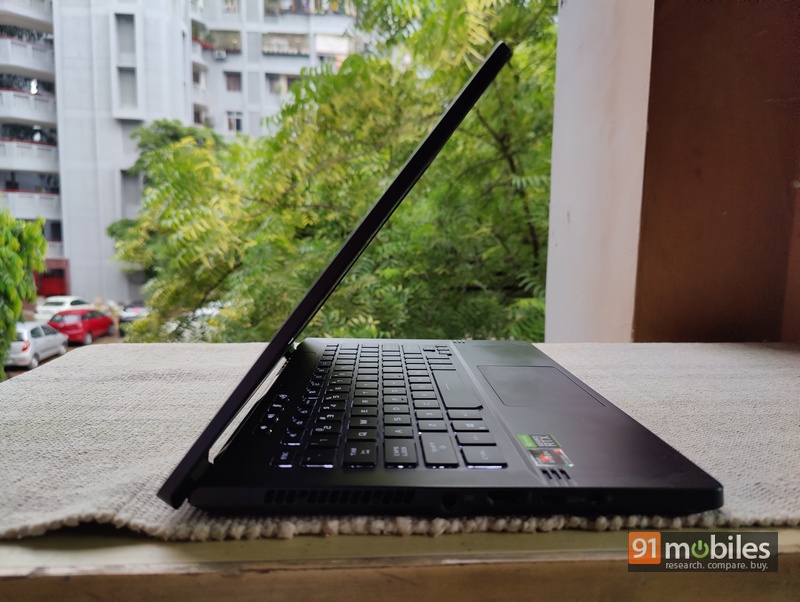 The ROG Zephyrus G14 is a near-perfect laptop in almost all aspects, whether you have professional needs or gaming. Heavy-duty internals wrapped in a package that is light enough to fit snugly in your backpack is a rarity, and ASUS seems to have mastered the art. A point of concern is the absence of Thunderbolt 4 ports that Intel-powered devices have readily available. The lack of a webcam also means that you would need to purchase an additional accessory if you are to conduct video calls. Lastly, there does appear to be some kind of heating issue on the device but that hasn’t affected my gaming experience. The Zephyrus G14 is my top recommendation for users that like to dabble in games but also want to carry the same machine to their office or college. 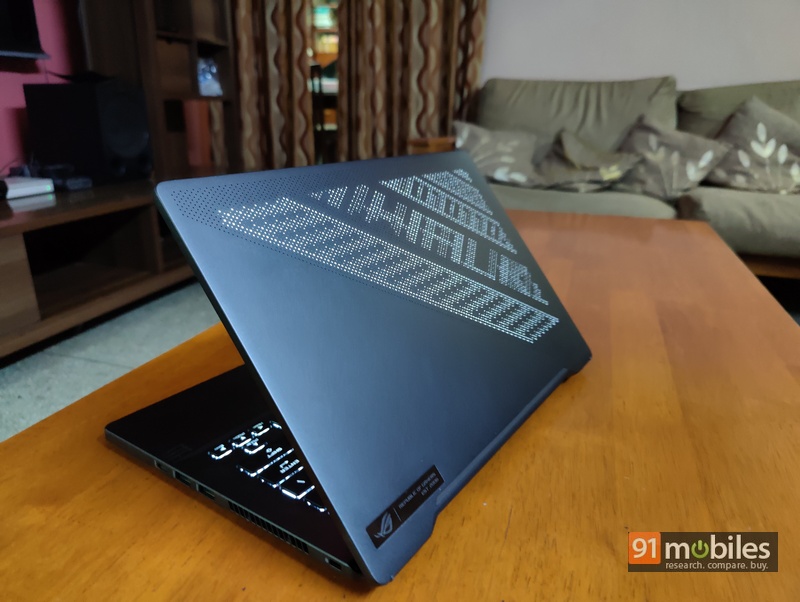