“With an 8th-gen Core i7 processor and NVIDIA RTX 2080 graphics, the ROG Zephyrus S GX701GX is a gamer’s delight”

That ASUS is one laptop brand that’s catering to the needs of gamers on the go shouldn’t be a surprise to anyone. But what’s interesting is that the Taiwanese company isn’t just targeting the mainstream audience with its ROG series, it also has the TUF lineup for budget-oriented gamers and the Zephyrus range for those who live and breathe gaming. Last year’s Zephyrus M GM501 (review) was a loaded offering that came with an interesting design and this time around, the new Zephyrus S GX701GX brings some serious upgrades under the hood with the headline feature being the RTX2080 Max Q GPU. I’ve been using the machine for the past 10 days and have to say that I’m completely blown away by the power it packs. So without further ado, here’s what makes the ASUS ROG Zephyrus S GX701GX tick. 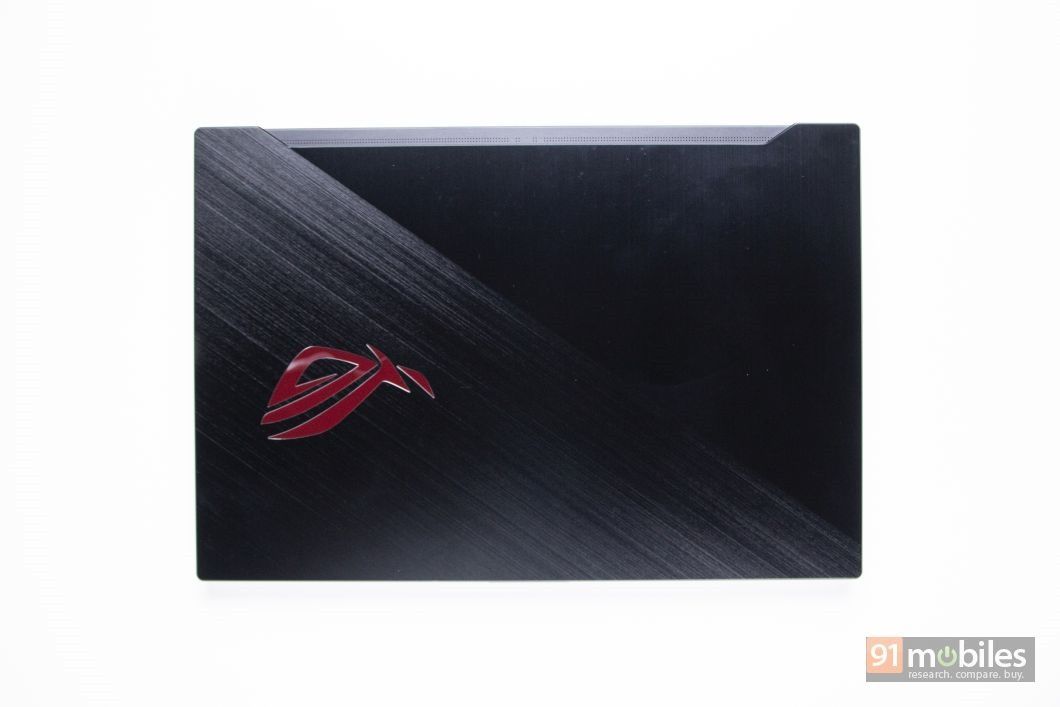 While the hardware is the pull factor of the Zephyrus S GX701GX, that doesn’t take away from the rather unique design of the rig. Similar to its predecessor, the latest device in the series comes with a unique placement for the keyboard (more on that later). 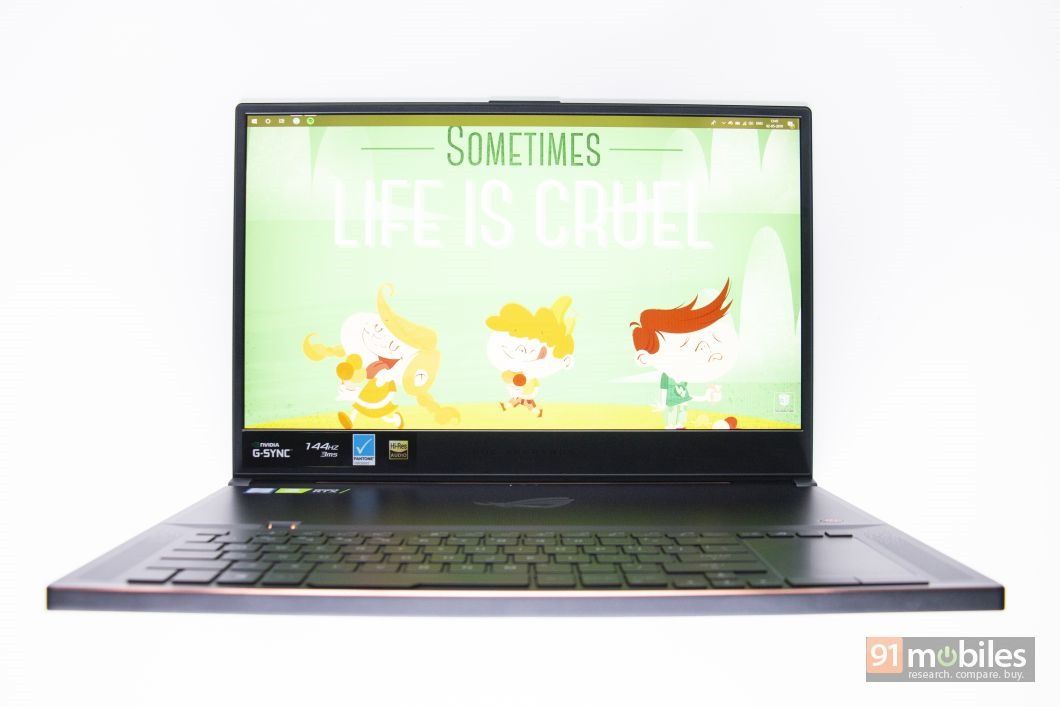 Of course, there’s no denying that the ASUS ROG Zephyrus S GX701GX is a big machine. With a 17.3-inch screen, it has sizeable dimensions. What’s commendable however is that the company has shaved off the bezels around the three sides of the screen quite significantly, making it not much larger than a 15-inch notebook. Tipping the scales at 2.7kg, the laptop is much lighter than most gaming laptops of its size, making it easier to carry around. You do get larger-than-usual bezels at the bottom, and what’s even more surprising is that the device misses out on a webcam. Yes, you read that right. However, the company does bundle an external web camera to offer that functionality. Another grouse I have with the device is with its build quality. While the outer lid and the area around the keyboard are constructed out of magnesium alloy, these areas show noticeable flex wherever pressure is applied. Ditto for the screen. 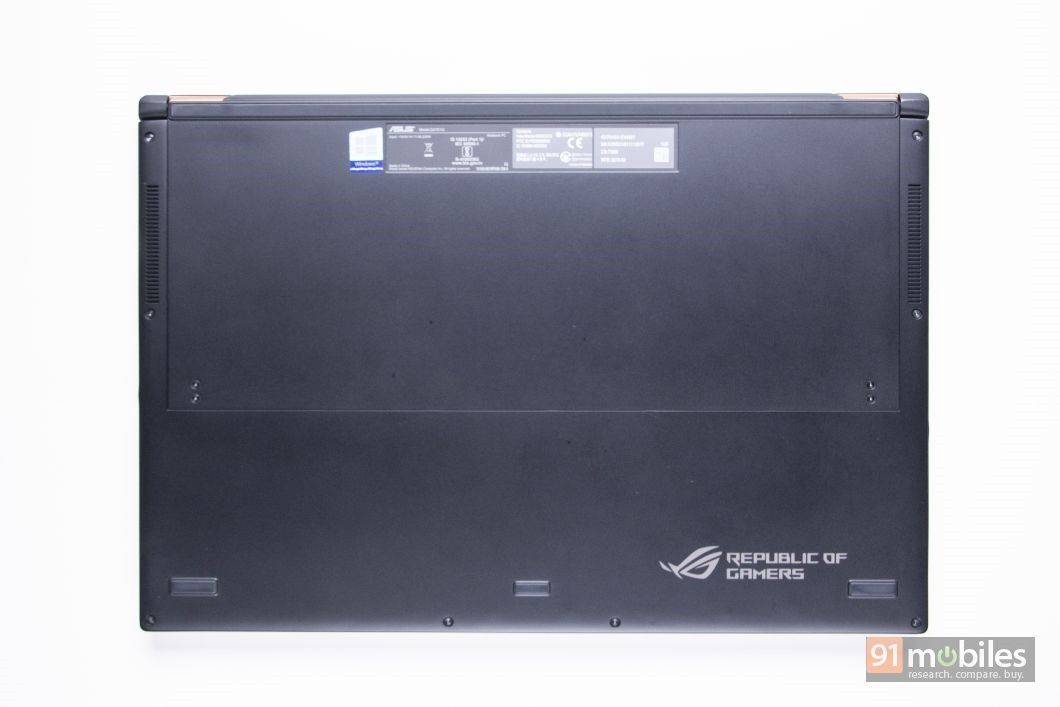 The 17.3-inch screen on the Zephyrus S utilises IPS tech and features full HD+ resolution. With 100 percent sRGB and Pantone-validated output, the display offers brilliant colour reproduction and the visuals are crisp too. Thanks to the non-glare panel that can get very bright, using the laptop in harsh sunlight isn’t an issue. Gamers would appreciate the 144Hz refresh rate, which ensures smooth gameplay. Not to mention that the 3ms response time is impressive and a godsend for gamers too. With large size comes an assortment of ports, and the ROG Zephyrus S GX701GX is quite loaded in this department. You get the proprietary barrel-type charging socket on the left, along with a full-size HDMI port, a USB Type-A port, a Type-C port and a 3.5mm audio interface. Towards the right, you’ll find another Type-C socket, and two Type-A ports. What’s conspicuously missing though is an SD card reader, which is odd considering the machine does have an ample space to offer the same. 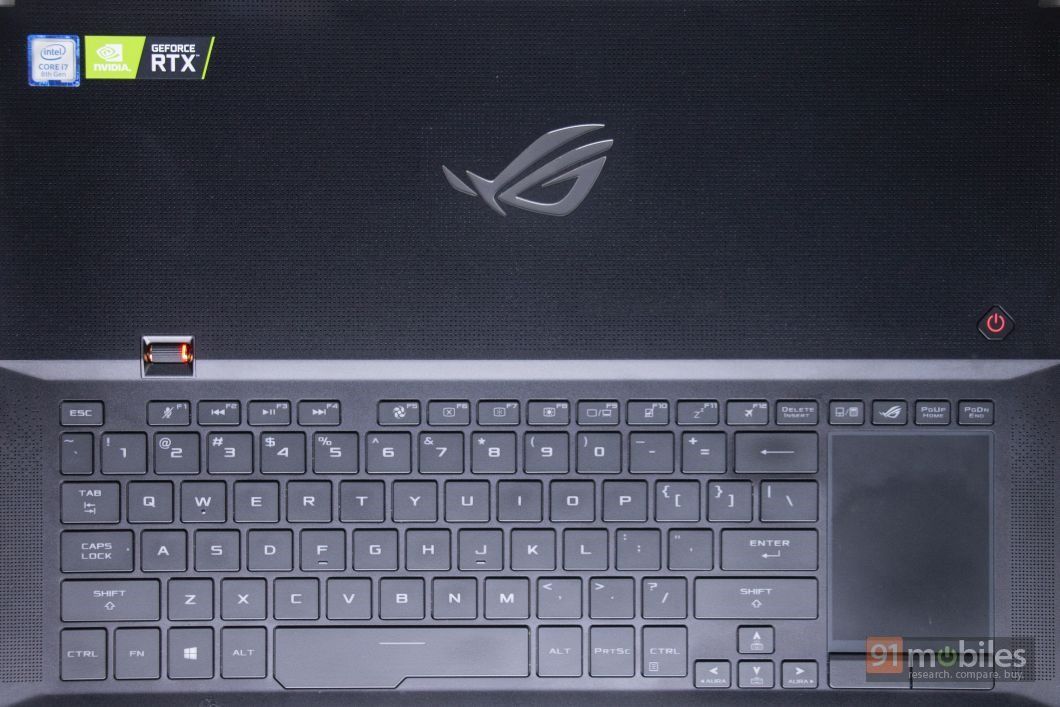 Just like its predecessor, the keyboard and trackpad of the GX701GX would raise polarising opinions. Instead of the conventional placement, ASUS has shifted the keyboard further below to have enough space for the ventilation grille on top. The trackpad is located on the right, where the numpad is usually found. While on paper, the idea doesn’t seem to be bad and seems rather a clever design decision, the reality is completely opposite. Here are some of issues I had with the keyboard placement on the Zephyrus S:

1) There’s no space for a palmrest, so you have to use the laptop on a table as you won’t be able to type comfortably when it’s kept on your lap (not that you’d be able to do that for long hours anyway, considering the rig’s size).

2) You’ll need to get used to the positioning of the keys, as even after using the device for so long, I never got comfortable with the placement of the arrow keys, among other things. In fact, due to the placement of the left and right mouse buttons, there were times when I pressed them instead of the right or down arrow keys.

3) Speaking of the trackpad, the surface area is really small, and it’s very difficult to manoeuvre the pointer on the screen.

4) The laptop has sharp edges which bite your palm if you keep them there while typing, so you’ll need to type with your palms in the air… which can’t be done for long periods. 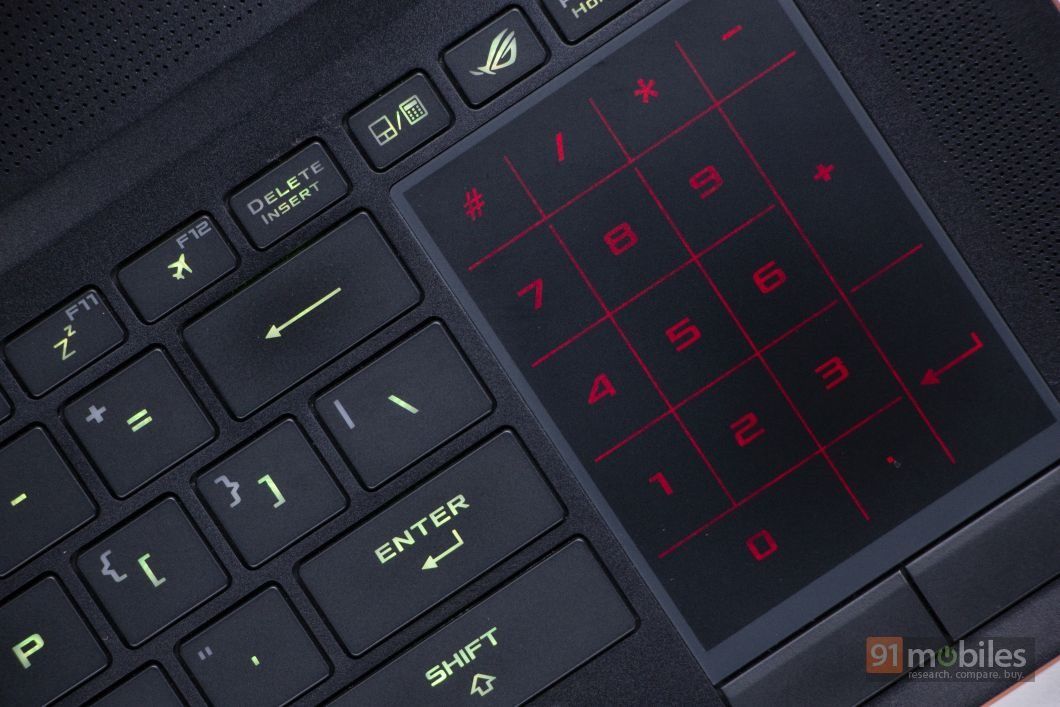 Having said that, the keys on the ASUS Zephyrus S GX701GX offer good travel (1.4mm) and there’s ample spacing between them too. You’ll also love the fact that the keyboard has a per-key RGB lighting, allowing you to tweak them to your liking. The Same is true for the trackpad, as it supports all the gestures and works accurately. The physical left- and right-click keys are a nice touch too. Another neat party trick is that the trackpad doubles up as a numpad with a press of a button, ala ASUS ZenBook UX333 (review). This allows you to type quickly, though unlike the UX333, you won’t be able to use the trackpad functionality when the number pad is active. 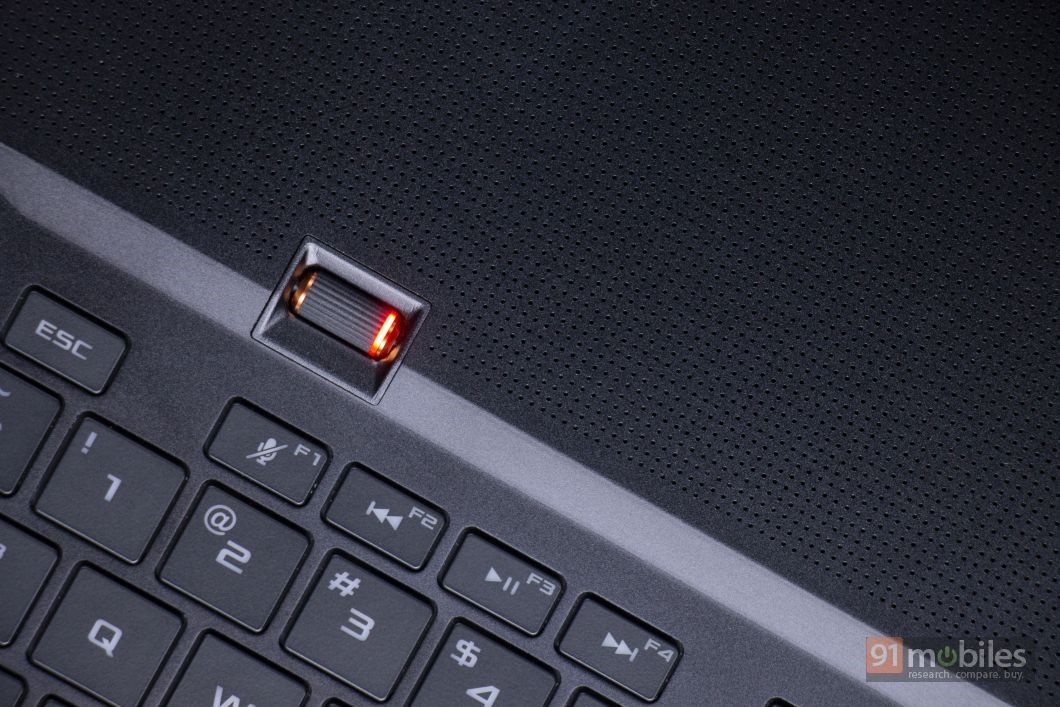 Just above the keyboard, you’ll find the volume knob which might seem gimmicky at first, but is so useful for increasing or decreasing volume (happens at 4-level steps) quickly.

I’m sure that this is an aspect that you’re keen to know about. If you want a TL;DR version, then I can tell you that the ASUS ROG Zephyrus S GX701GX won’t disappoint gamers, and can handle even the most graphics-intensive titles without batting an eyelid. Before elaborating that, let’s get the specs out of the way. The processing duties are handled by the Intel Core i7-8750U hexa-core chipset, which is clocked at 2.2GHz and can go up to 4GHz in the Turbo mode. That’s paired with a beefy 24GB of DDR4 RAM. For graphics, the laptop comes equipped with the NVIDIA GeForce RTX 2080 in its Max-Q avatar that features 8GB GDDR6 VRAM. The unbeatable combination that this hardware offers reflects in the benchmarks too. The device scores 5,379 on PCMark 10, whereas it gets an impressive 2581cb on Cinebench R20. Converting a 5-min 4K video using Handbrake took 5 minute and 33 seconds.

How does all that translate to real-life usage? Well, let’s just say that you won’t to open the task manager (or any other tool) to check for system resources being utilised, whether you’re doing regular work like number crunching in Excel, or running heavy tasks such as video editing or playing games… the rig ensures a buttery-smooth performance in all scenarios. 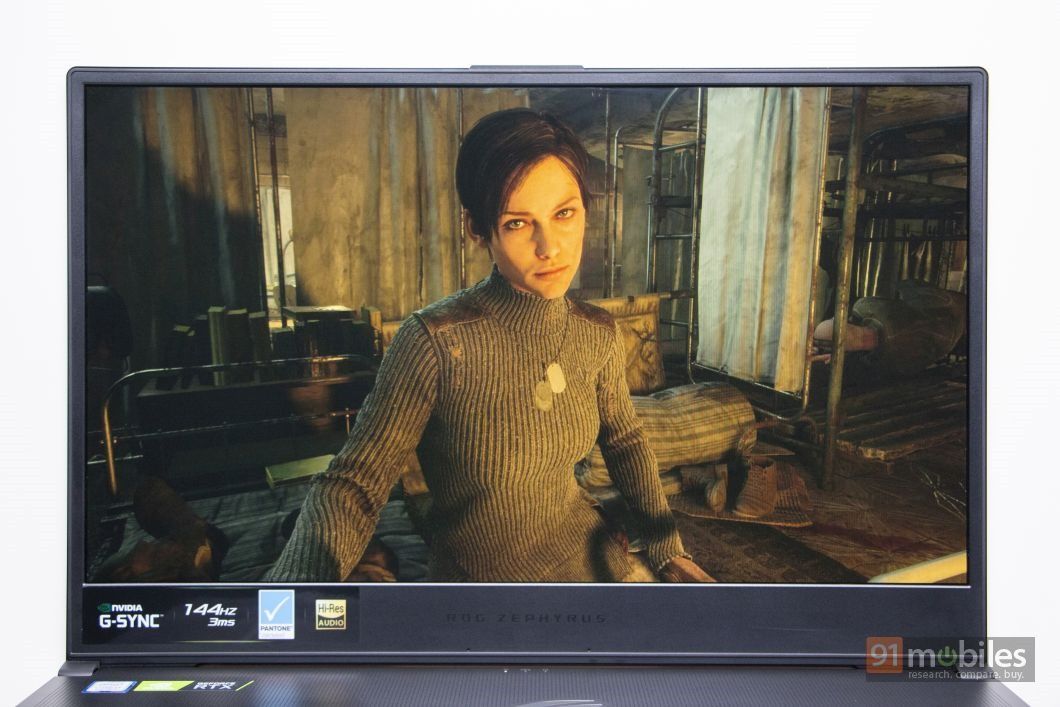 Talking specifics, I ran a slew of games on the ROG Zephyrus S GX701GX. Metro Exodus ran incredibly smooth with an average frame rate of 110fps, seeing a maximum frame rate of as high as 125fps. Witcher 3 on the other hand, witnessed a frame rate of 90-100fps. I also tried my hands on a bunch of the other games including Shadow of the Tomb Raider, and the laptop was able to run them without breaking a sweat. Of course, as explained in the review of the RTX2060-powered ROG Strix SCAR II GL504GV, you’d also be able to notice the difference created by Ray Tracing and DLSS in the compatible games.

Sadly, for all its gaming prowess and AAS (Active Aerodynamic System), the ASUS ROG Zephyrus S GX701GX fails to keep the thermals in check. While gaming, the dual fans work at full speed (and get noisy), but despite that, the portion above the keyboard gets quite hot – which is possibly due to the fact that it’s made out of metal. What’s more troublesome however, is the fact that you would notice the heat sometimes even while using the laptop even while performing mundane tasks. 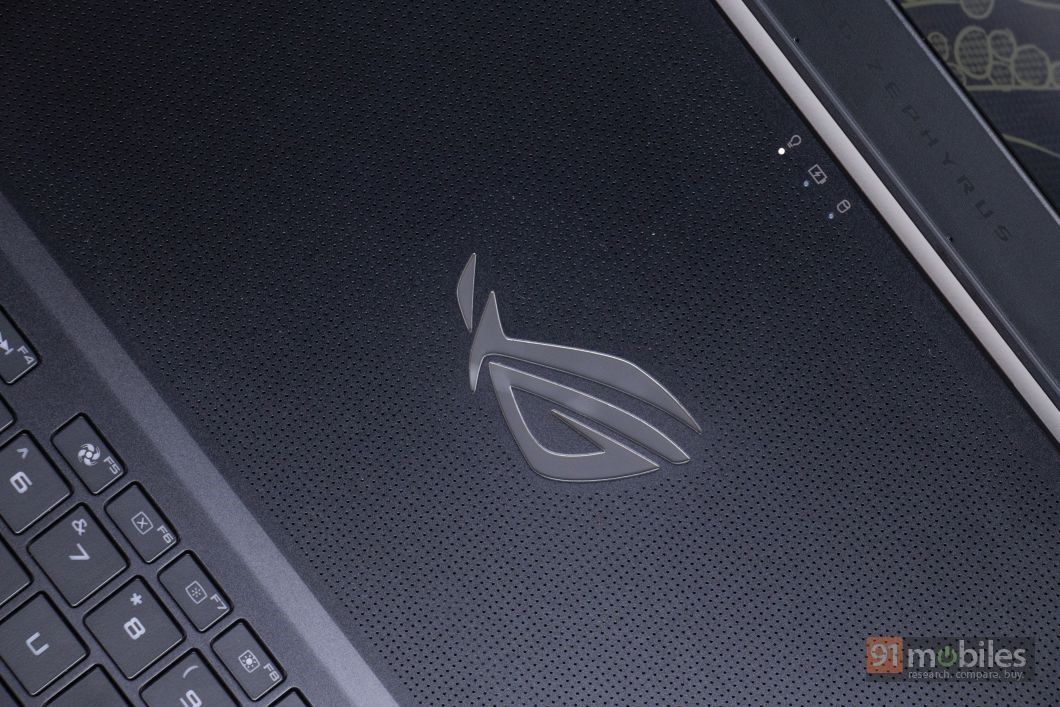 The GX701GX ships with a 1TB SSD, which is blazingly fast. It’s also interesting to see ASUS only offering an SSD option, which has the more-than-enough capacity to meet your requirements. In CrystalDiskMark, the notebook achieved read and write speeds of 3,387.7MB/s and 2,284.3MB/s.

Being a gaming laptop, it’s paramount for the ASUS ROG Zephyrus S GX701GX to offer good sound output. Thankfully, the device manages to deliver that thanks to its stereo setup of 2.5W speakers. Even at the full volume, the sound doesn’t get muffled and is quite crisp.

The laptop runs Windows 10, and you’ll find a usual suite of apps from ASUS, including Armoury Crate which lets you see the system settings at a glance along with letting you control the RGB lighting of the logos and the keyboard. 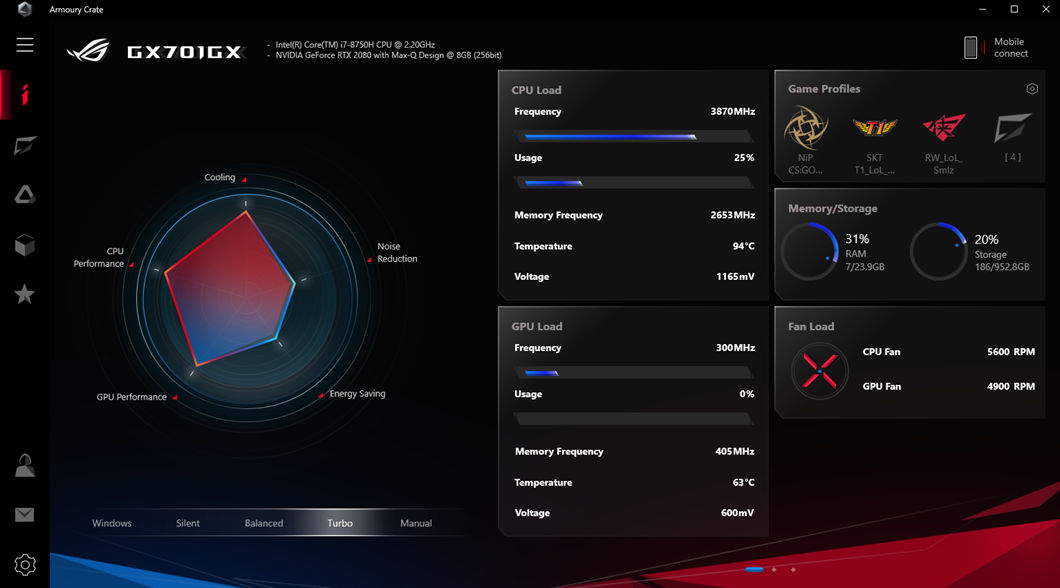 The ASUS Zephyrus S GX701GX ships with a 76WH battery. Like with all gaming laptops, you can’t expect to carry around the laptop without its bulky adapter the entire day. In normal usage, the device is able to last about up to three hours, which is just about average. In the BatteryEaterPro test, the device was able to last less than 150 minutes, which corroborates with our real-life usage. 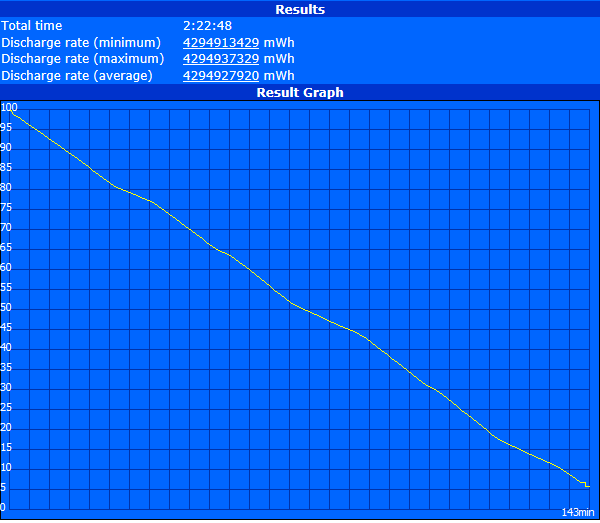 The machine can go from 10 percent to 100 in about an hour and 20 minutes with the bundled 230W adapter. What’s interesting is that you can also use a 65W Type-C charger to juice up the device too. 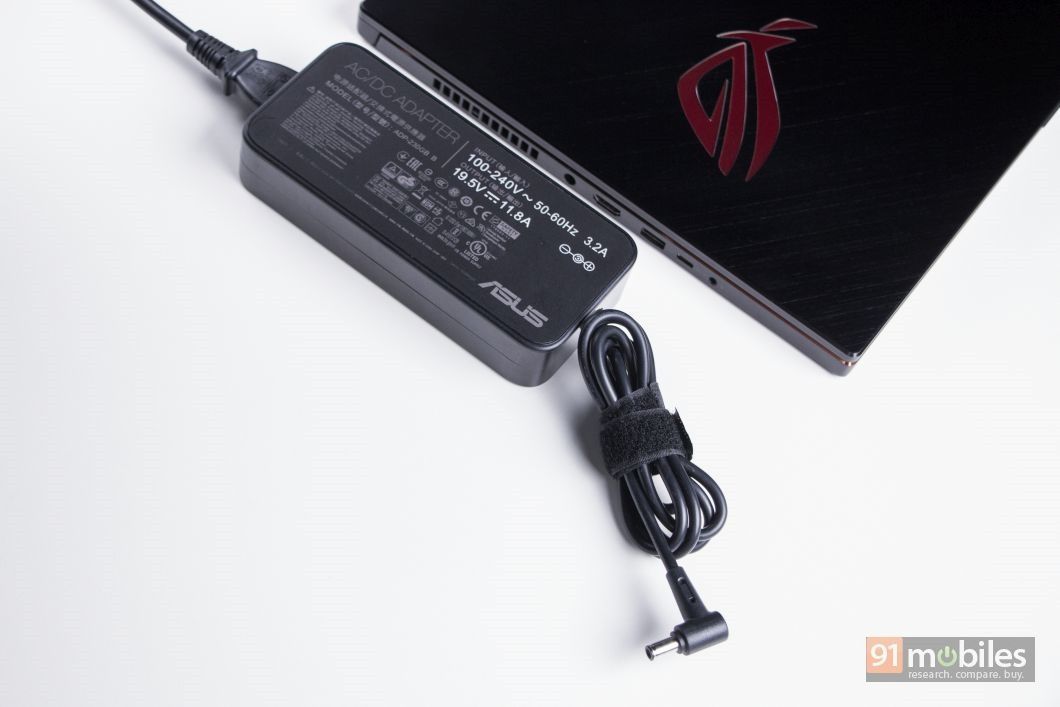 With a starting price of Rs 3,49,990, there’s no doubt that the ASUS ROG Zephyrus S GX701GX isn’t for casual buyers. In fact, even hardcore gamers would need to think twice before plonking their savings for this machine. Yet, as this review would tell you, the GX701GX is a beast and it’s hard to find too many flaws with this one apart from its size (which is a boon for gamers) and perhaps, the thermal efficiency.

With regards to the competition, the ROG Zephyrus S GX701GX doesn’t have too many rivals. There’s the Dell Alienware Area 51m (first impressions), which along with offering similar hardware, is a future-proof option as it comes with the option to upgrade the CPU or GPU. But the bigger issue for the ROG device isn’t necessarily the competition, but the fact that technology is improving at a rapid pace. Recently, Intel announced 9th-gen chipsets with MSI already having launched its latest lineup in the Indian market. The MSI GT75 Titan is a worthy option for one who’s looking for similar capabilities. ASUS has also upgraded its laptops in the ROG lineup with the 9th-gen processors, and we can expect them to launch in the country sooner than later. 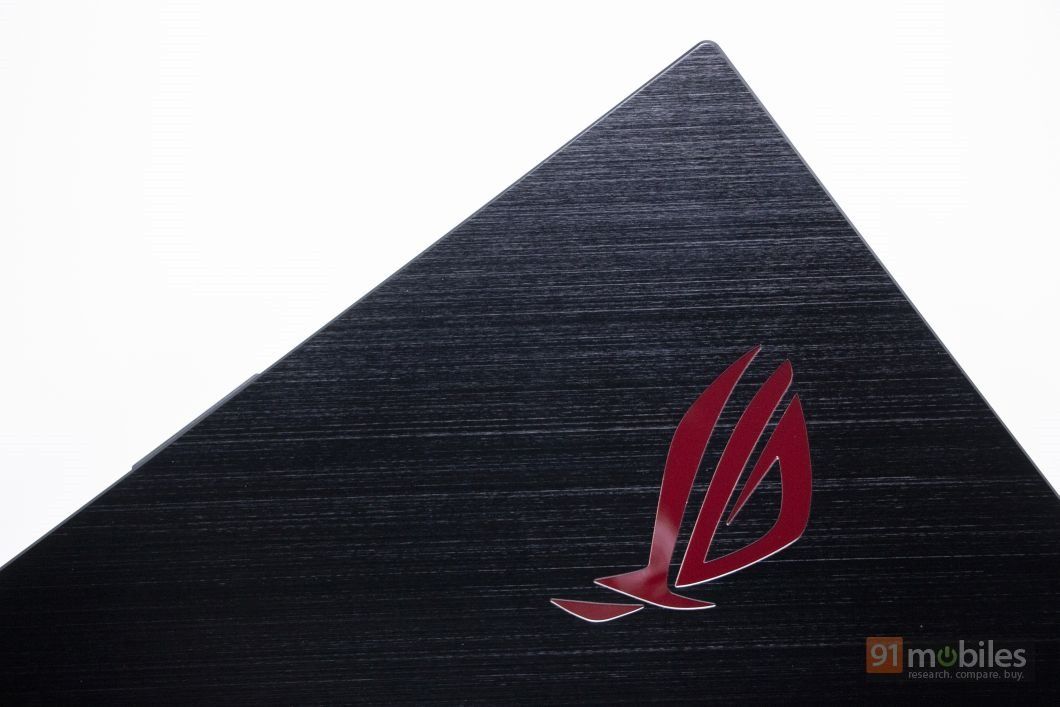 So should you go for the Zephyrus S GX701? Well, if you’re a full-fledged gamer looking for the most powerful rig out there and can’t wait for newer devices to launch, then the ASUS ROG Zephyrus S GX701GX is definitely worth considering.