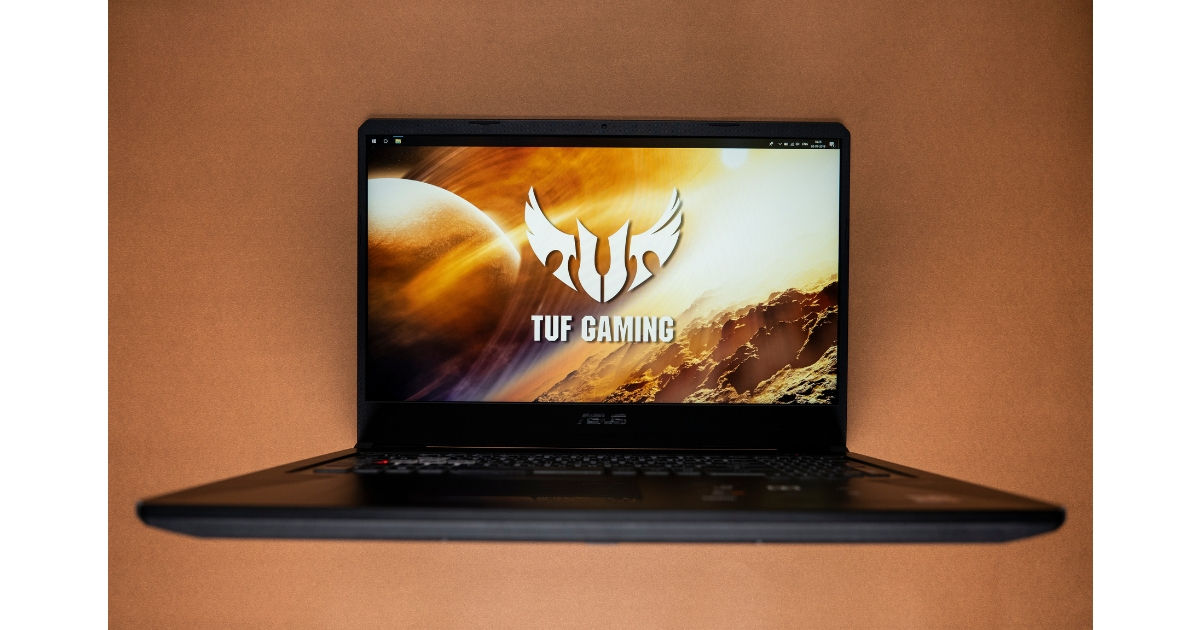 If you’ve been following the computing space closely, then you must have admiration for the graphics major NVIDIA. Rarely has a new technology spread so quickly (considering new technologies usually face a lot of resistance, and take time to proliferate) as NVIDIA’s Ray Tracing and DLSS. And after offering this functionality with its high-end RTX range of GPUs, the company has brought the Turing architecture to a more affordable price point with the GTX 1650 (although it doesn’t support ray tracing abilities). And the laptops powered by this GPU have already started making their way into the market. One such laptop is the ASUS TUF Gaming FX705DT, which expands the Taiwanese giant’s affordable gaming range. I’ve been using the machine for more than two weeks to judge whether it justifies its price tag of Rs 82,990, and here’s what I think. 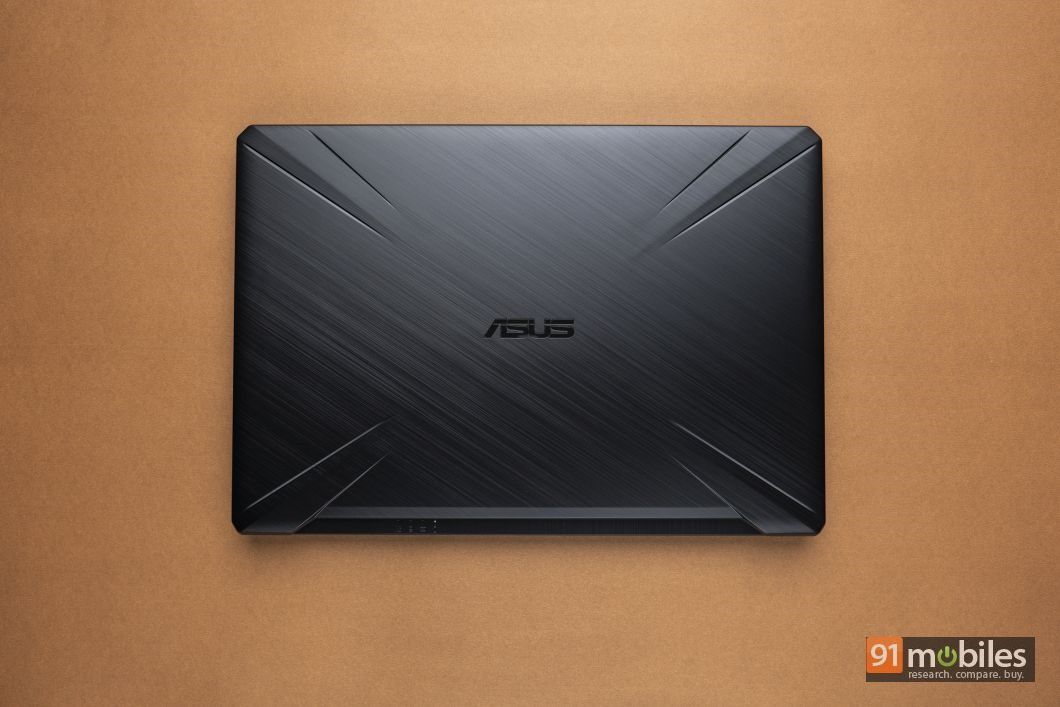 Over the past few months, I’ve reviewed a couple of laptops from ASUS TUF lineup, and the TUF Gaming FX705DT upholds a similar design language. Now that’s both good and bad, for reasons that I’ll explain below. 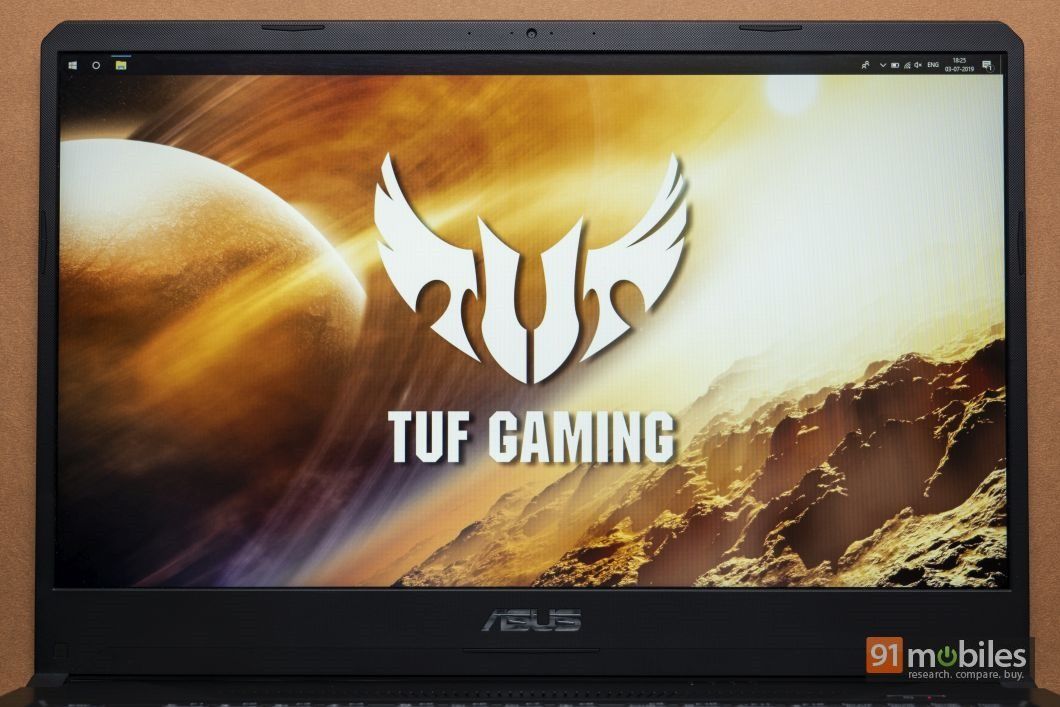 For a laptop with a large 17-inch display, the FX705DT is fairly compact… in fact, it doesn’t seem to be much bigger than some 15.6-inch laptops. Weighing around 2.6kg, ASUS’ offering isn’t too bulky when compared to other devices of its size. In terms of thickness, the device measures 26.6mm, which for a gaming laptop isn’t too bad at all. 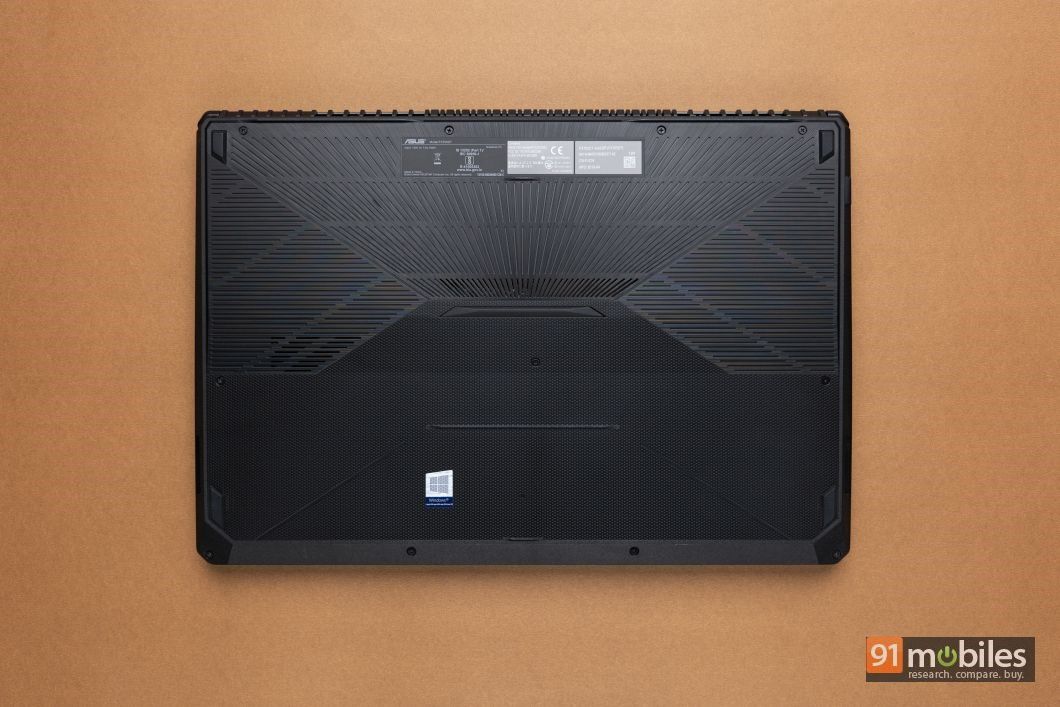 On the flipside however, the build quality of the ASUS TUF Gaming FX705T leaves a lot to be desired. The outer lid shows a significant amount of flex, and the same remains the case when you open it. As a matter of fact, it’s so bad that the screen warps. The same remains the case when you open the device and check the palm rest area. While you may not notice it while typing normally, you’d see the machine flexing when pressure is applied. 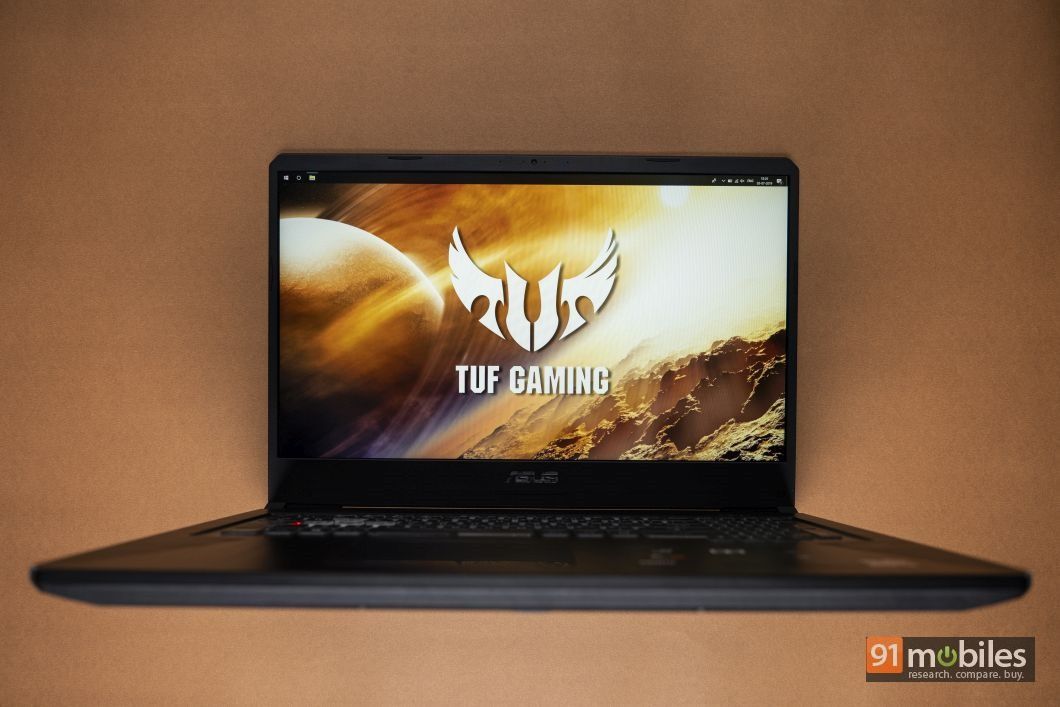 Coming back to the design, the ASUS FX705DT doesn’t have any attention-grabbing RGB lighting on its lid, and yet, it does have some interesting aesthetics. On the outside, you’ll find angular lines on all sides meeting the ASUS logo in the middle, which the brand is referring to as the Radiating X design. And angles seems to be the theme for the laptop – it features angular corners and angled cuts above and below the keyboard. What I also liked is the matte finish, both outside and inside as it offers better grip and typing experience, respectively. Moreover, this means that the device doesn’t catch fingerprints easily and it’s easier to clean too. Alongside the power button, the device features a speaker grille. I also liked the fact the LED indicators for power, battery charging, low battery and airplane mode are visible even when the lid is closed.

ASUS is usually liberal in terms of the ports on offer, and the TUF Gaming FX705DT is no different. It comes with three USB 3.0 ports, placed on the left, accompanied by a proprietary charging socket, Ethernet port, a full-sized HDMI port and a 3.5mm headphone interface. What’s strange however, is the fact the right edge is completely empty, except for a lock port. This may not be a bad thing, as no accessories can potentially block the mouse movements… essential from a gaming perspective. I do miss an SD card reader however, especially considering the machine does seem to have ample space to include one.

The ASUS TUF Gaming FX705DT features a full keyboard, meaning that there’s a dedicated number pad as well on the right side. The key placement follows the norms, and this being a gaming laptop, you do get RGB backlighting support. The keys offer a travel of 1.8mm, which is quite good. However, even with that the keys seem quite mushy, and don’t really offer tactile feedback. Thankfully though, there’s enough gap between the keys and hence once you get used to the device, typing becomes error-free and fast. In the 10fingersfast test, I was able to type at around 70wpm. 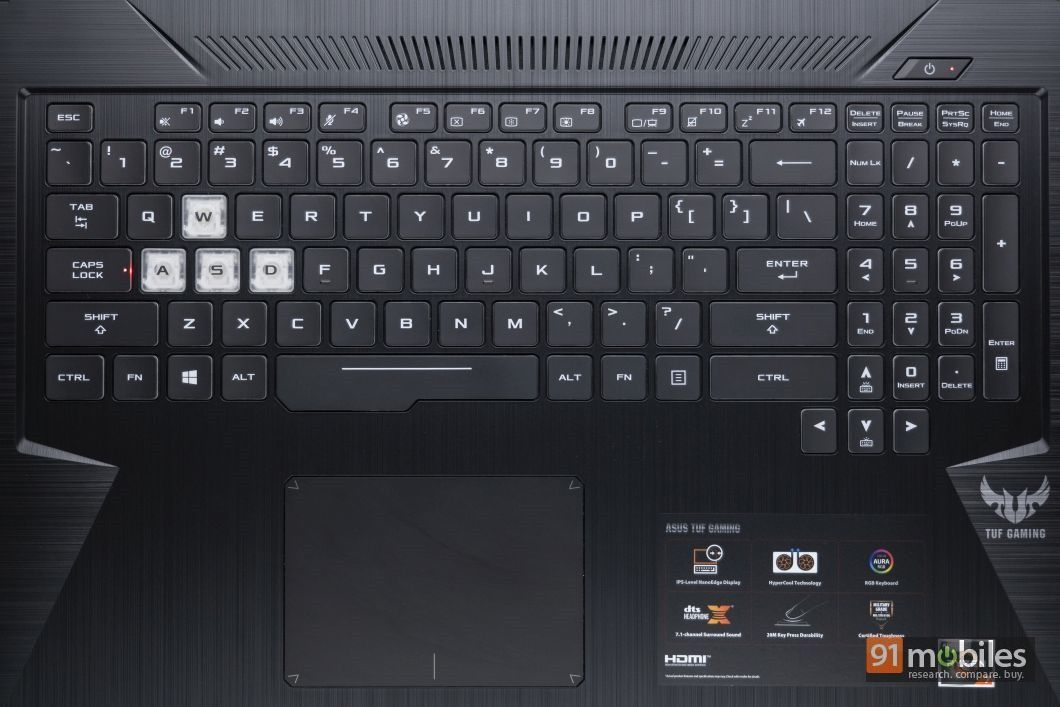 The trackpad also works quite well, supporting gestures and sporting dedicated markings for left and right click. However, at times, it just seems either extremely responsive (resulting in inadvertent movements) or unresponsive, affecting the gaming experience. 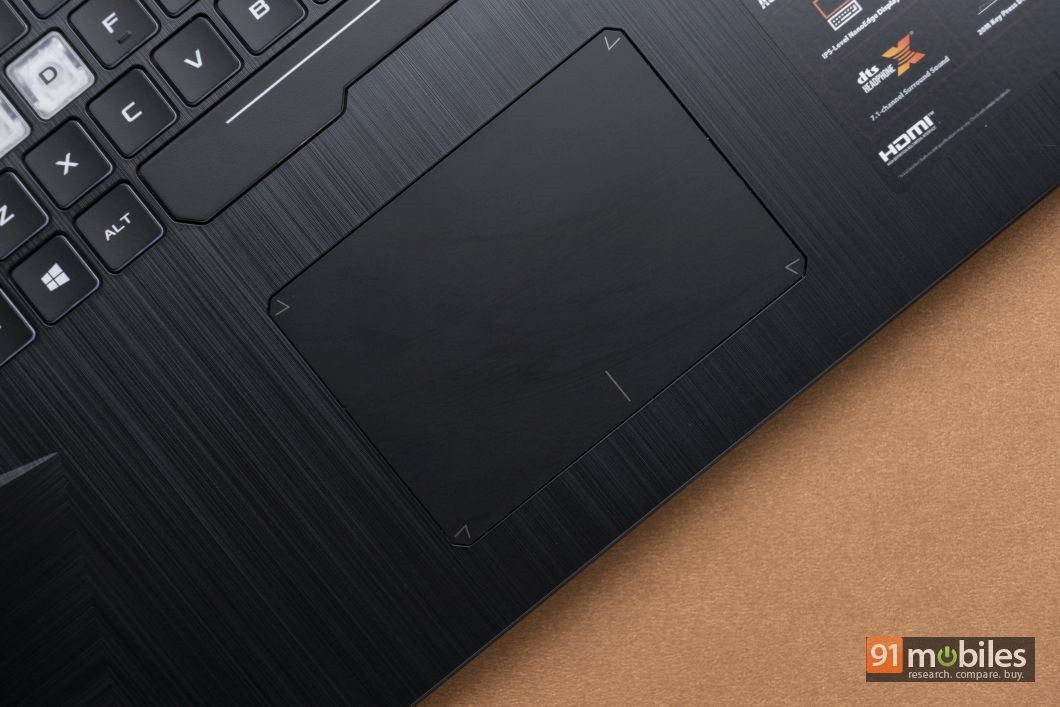 The NVIDIA GTX 1650 isn’t the only highlight of the TUF FX705DT. The laptop os also among the very few machines to come powered by AMD’s Ryzen chipset – and that too, the top-of-the-line Ryzen 7 3750H chipset. As an end user though, you don’t need to worry about what the laptop packs in, but how good it is while performing day-to-day tasks. And I’m glad to tell you that the ASUS rig doesn’t disappoint in this regard. There was rarely an instance where it seemed to lag. This reflects in benchmark scores as well as it managed to achieve 3,592 on PCMark10. In Cinebench R20, the CPU score was 1,642cb. Having said that, there were times when the display blanked out for a few seconds. 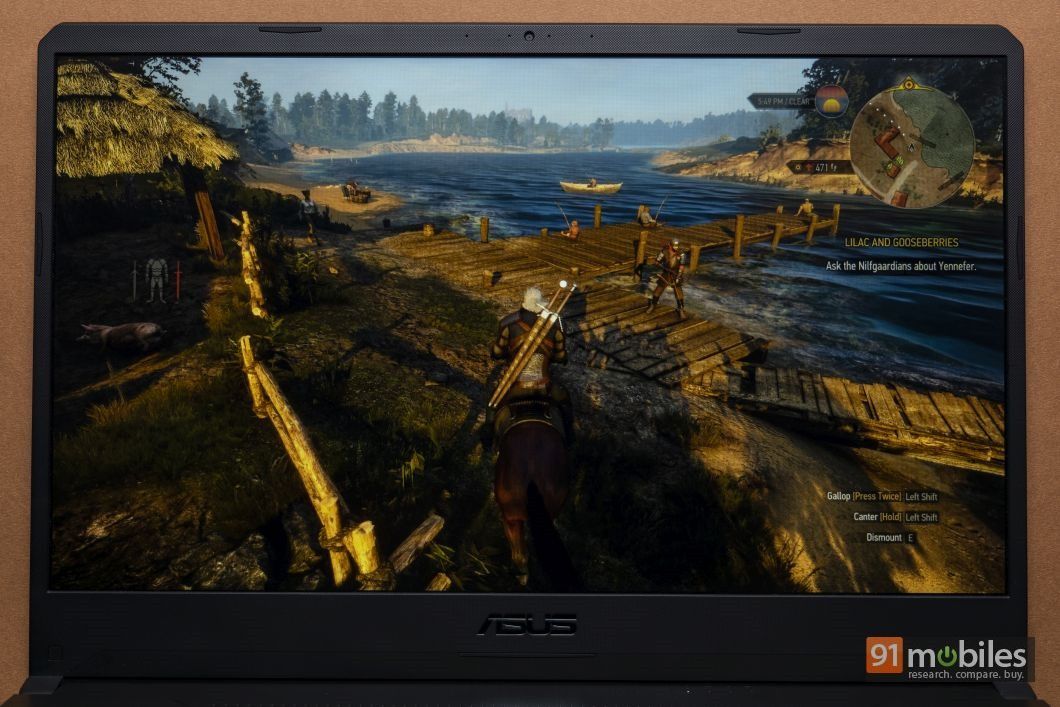 While I’ve built up the hype for the GTX 1650, don’t keep your hopes too high in the gaming department. The successor to the GTX 1050 is an entry-level graphics card that comes with 4GB of VRAM and hence is only meant for casual gaming. Perhaps that’s why titles like Fortnite and Middle-earth: Shadow of War worked relatively well, offering up to 60fps in full HD resolution. The latter however, offered average frame rates of 50fps. In contrast, playing titles like The Witcher 3 and Metro Exodus took its toll on the ASUS TUF Gaming FX705DT. There were jarring frame drops that spoiled the experience, and this happened even when the game was showing a storyline and I wasn’t even playing. On the plus side, the device keeps its thermals in check and it only gets slightly warm on the top portion, all thanks to its HyperCool tech.

On the storage side of things, the ASUS TUF Gaming FX705DT ships with a 512GB SSD. In CrystalDiskMark, the HDD scored 1,808.7MB/s and 325.1MB/s in reading and writing speeds, respectively.

The FX705DT boots Windows 10 Home and tries to keep things vanilla in terms of the out of the box experience. While there’s the nagging McAfee Antivirus app preinstalled which we’ve talked about in ASUS laptops before, you’ll like the Armoury Crate app for getting an at-a-glance view of the device.

Battery-wise, it’s a given that we shouldn’t have too many hopes from a gaming-centric laptop. The TUF Gaming FX705DT however, isn’t too bad as it’s usually able to last a little less than three hours while performing regular tasks like writing, streaming music and browsing the web. In BatteryEaterPro, the device was able to sustain around two hours. What I really liked is the fact that the charging adapter rated at 150W is really slim, which is a rarity in the world of gaming machines. It’s able to juice up the rig fully from 10 percent levels in about an hour and 45 minutes. 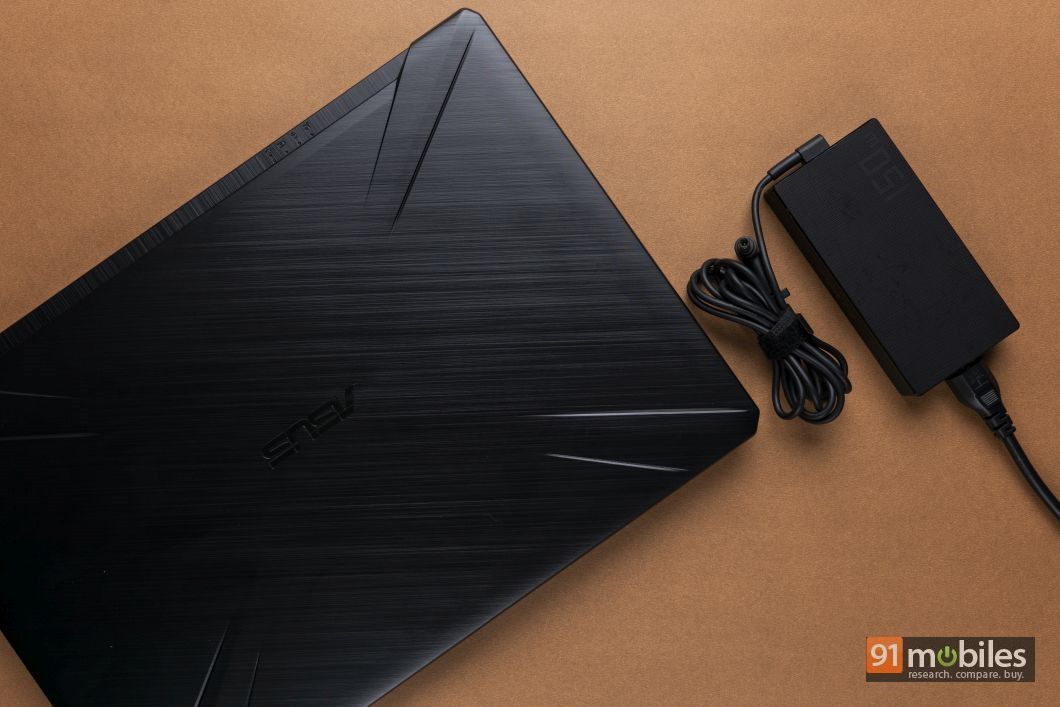 The TUF Gaming FX705DT features dual speakers on the sides, but they are quite tinny. Even at full volume, it was hard to discern the lyrics of the song or understand the movements or dialogues while playing games. That’s despite the fact that the machine ships with DTS 7.1 surround sound.

The ASUS TUF Gaming FX705DT is priced at Rs 82,990, but do a quick search online and you can purchase it around the Rs 72,000 mark. For the price, the laptop offers an unparalleled combination of a large 17.3-inch screen, good processing power, and decent battery life. That said, the construction quality of the device doesn’t arouse much confidence. I won’t necessarily consider gaming its biggest strengths either, considering the GTX 1650 GPU doesn’t really live up to the expectations. So if you are a budding gamer, then I’d suggest you to take a look at the MSI GL63, which is available for around Rs 90k, but offers the GTX 1660 TI graphics chip. 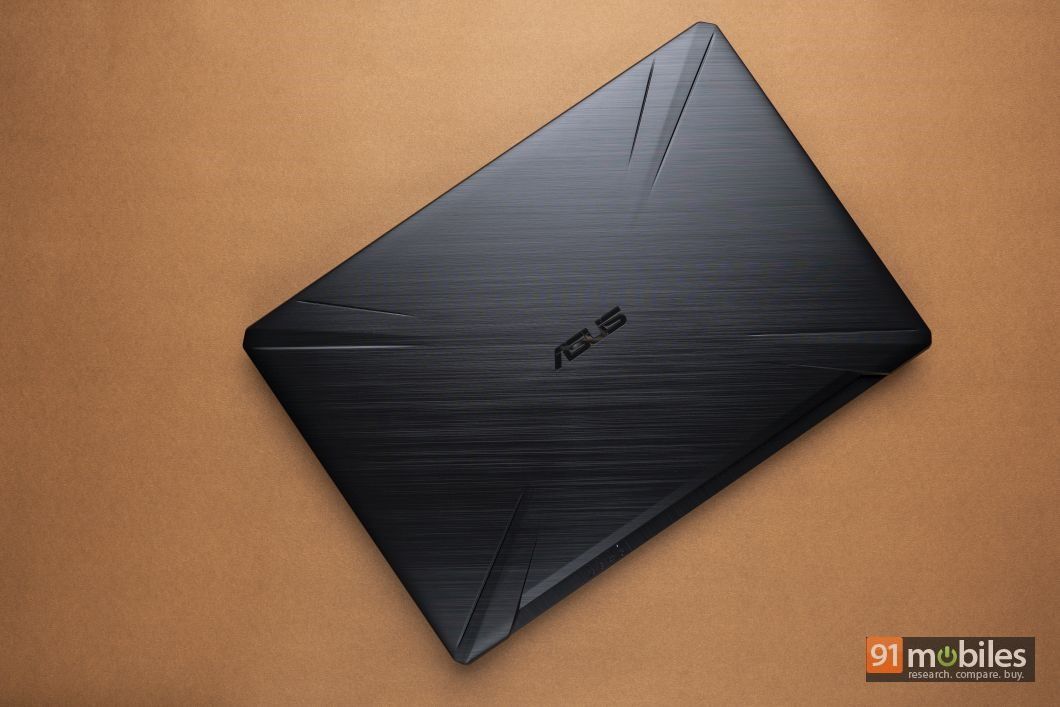 However, as mentioned above, it’s hard to find an equally-capable laptop with big screen real estate, and that’s why the ASUS TUF Gaming FX705DT shouldn’t be ignored for anyone looking to buy a rig in the Rs 80k segment.