Even if you are a hardcore audiophile and don’t hold the sound signature of the Bose Quiet Control (QC) 25 in high regard, you will admit that the noise cancellation technology on Bose headphones is second to none. I own a pair of QC 25 headphones precisely for this reason. Although, I’ve always wondered what would it be like if the QC 25 was wireless. Well, it seems like Bose took a peek into my mind and now we have the new QC 35 headphones, which can play audio via a Bluetooth connection wirelessly and still deliver the same award-winning noise cancelling as well. 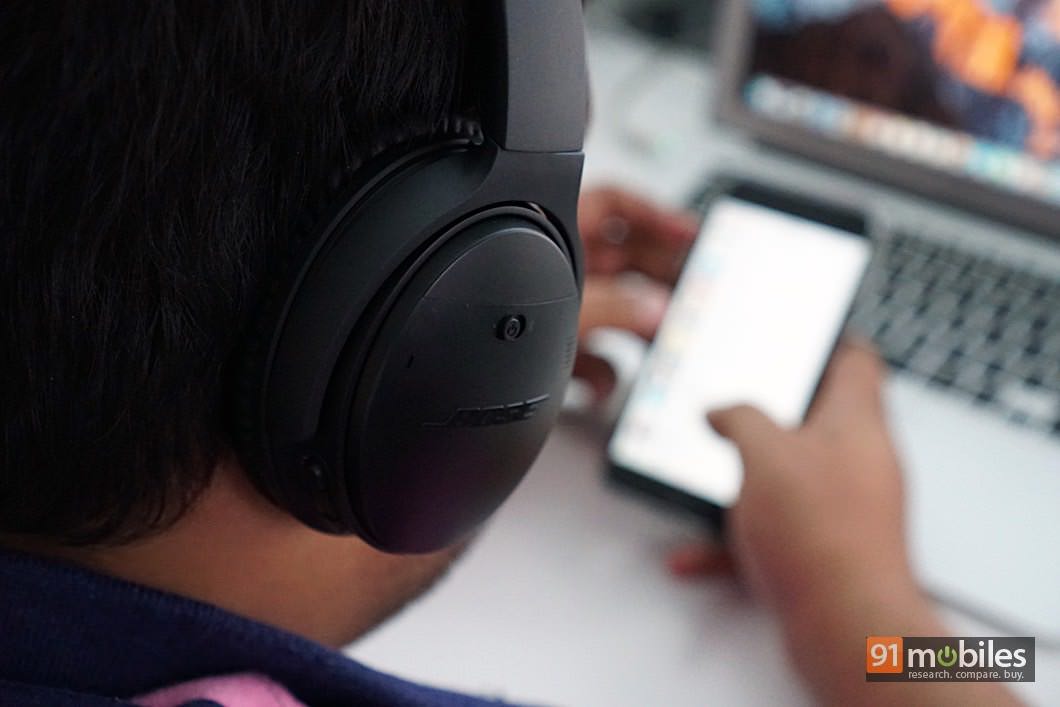 I am writing this review of the Bose QC 35 from the closed confines of a Boeing 737 flying above majestic clouds. The clouds look like gigantic white cotton candy and the suns rays pierce through them like needle through a thin piece of cloth. As I absorb the beauty of this scene with my eyes, my ears are treated to the wonderful flute interludes in Anjali Anjali from the movie Duet, composed by A R Rahman. Oh yeah, before I forget, I am untethered with no messy wires getting in the way of my body and the seat belt. Ah, bliss!

However, not all is hunky dory. My serene personal space is interrupted by the cries of a little baby. What you need to know is that while we do get active noise cancellation in the Bose QC 35, it can only reduce the sound of a constant hum or a drone; the sound of people’s voices and crying babies can only be blocked out entirely if you crank up the volume above 70 percent, which is actually beyond the threshold of the recommended volume level. If I have to explain the tech: essentially the circuit inside the Bose QC 35 identifies the frequency of the constant hum and cancels it by overlaying it with the opposite frequency of the hum.

For some odd reason, on my flight from Amsterdam to Barcelona, the air hostess urged me to use the wires with the headphones. I didn’t bother arguing and did as she asked, primarily because it then gave me the opportunity to test the audio quality using a 3.5mm cable. I can’t believe I am saying this but the QC 35 was much louder and had a more attacking sound signature when connected wirelessly. Also note that the noise cancellation is not active by default in the wired mode and you have to use the power on / off switch to switch it on. By default, the noise cancellation is always active in the wireless mode. 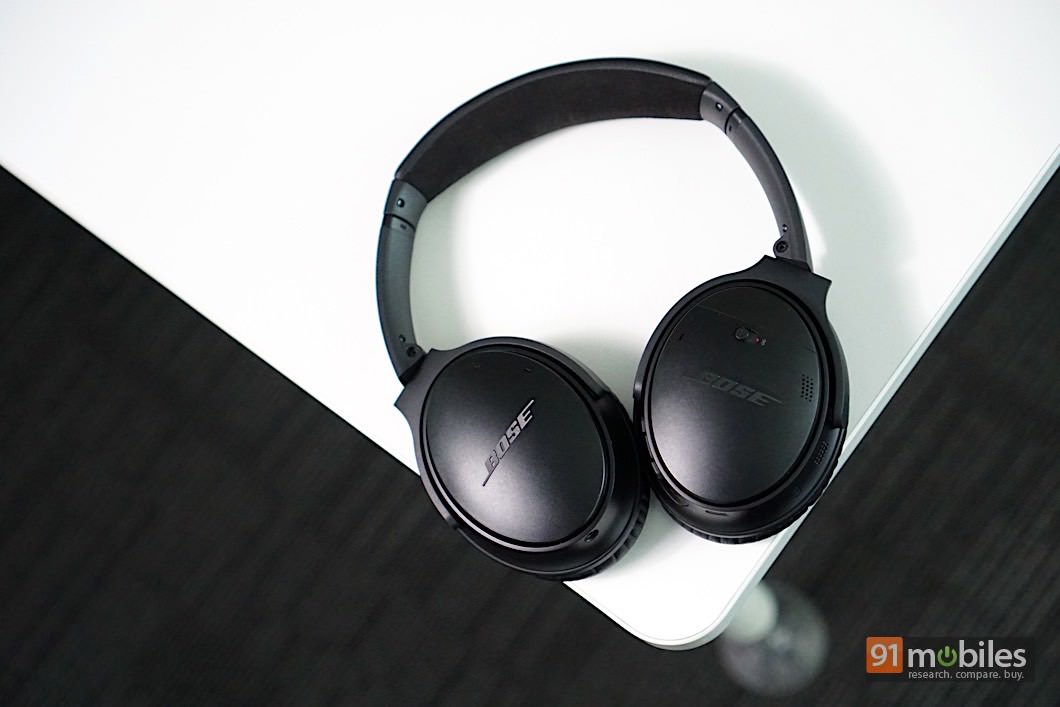 There’s also a companion app called Bose Connect. It is a basic app that keeps a track of all the devices that are paired with the QC 35. There are no EQ settings, no custom voice commands… nothing. In my opinion, this is a major missed opportunity for Bose. On the other hand though, I like the voice commands on the QC 35. The moment you switch it on, a friendly female voice tells you the remaining battery status, apart from the other commands, of course. Quite handy, I must say. Moreover, the buttons for the volume controls, and play and pause, offer great travel and tactile feedback as well. This time around there is an internal battery — in lieu of the two AAA batteries used in the QC 25 — which can be charged using the provided micro-USB cable. Talking about the battery life, the QC 35 can easily last you for 20 hours, in line with Bose’s claims, before you need to charge it.

The QC 35 carries forward the same comfort level of QC 25, meaning you can wear it on your head for hours on end and not feel the fatigue. Talking about the sound, the QC 35 is louder and has slightly more attack compared to the QC 25. However, the sound signature is characterised by the trademark warm low-end and good top end (treble) accuracy. The mid range is where the QC 35 suffers the most; it sounds recessed and hollow. Most EDM and pop tracks sound good on the QC 25 but I must say that if you listen to a lot of rock or metal, you might want to look at other options. 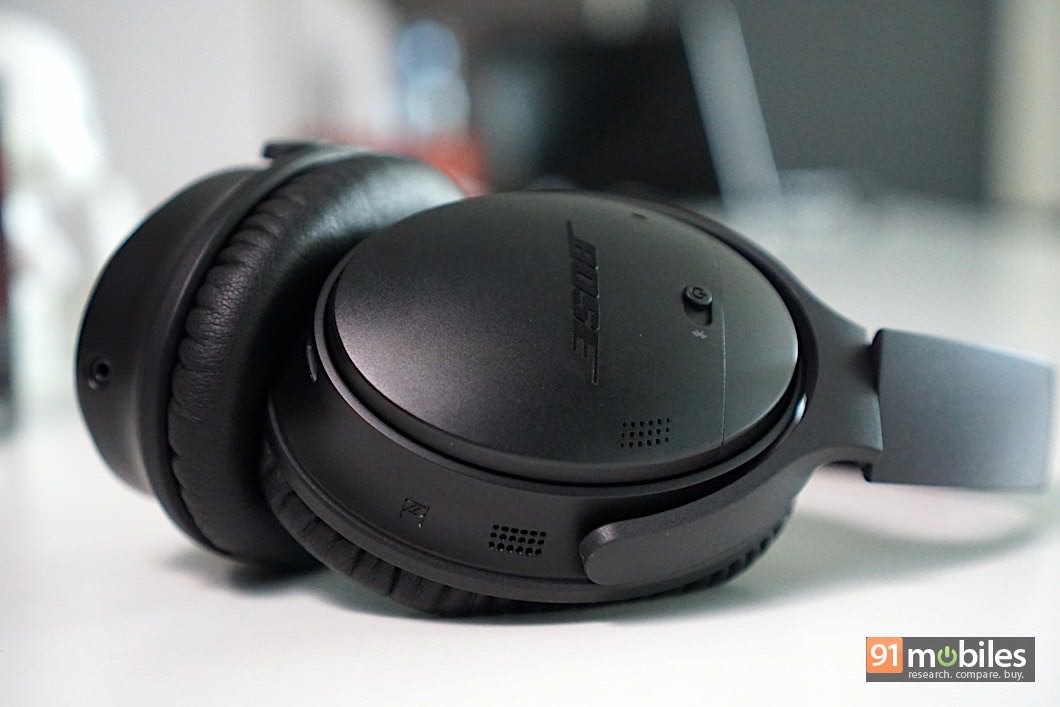 The one major advantage of such effective noise cancellation is that imaging is excellent. You can listen to every instrument used in a song and there is a high chance that you might stumble upon certain elements you haven’t heard in a song before. I absolutely loved discovering some hidden nuances in Gustavo Santaolalla’s masterful guitar work in the Last of Us theme. Fun fact: Santaolalla was also the music director for Dhobi Ghat.

Granted, the Bose QC 35 won’t win any awards for their sonic fidelity but the superlative noise cancellation is an absolute treat for all ears. As a matter of fact, untrained ears will actually find the QC 35’s sound great. However, while Bose had a monopoly up until last year as far as noise cancellation headphones are concerned, we now have more competitors in the market. In fact, the Sony MDR-1000X — which are also available for around the same price of Rs 30,000 —offers better codec support like LDAC, AAC and aptX, and they sound better than the QC 35 too.That said, the Bose headphones offer better noise cancellation. In the end, it really boils down to your priority.

As far as the next Bose noise cancelling headphones are concerned, I’d love to see maybe truly wireless buds like the Bragi Dash or the Apple AirPods. If I am not asking for too much, Bose could maybe license Apple’s W1 chip for easy connectivity? Pretty please.