For the past two years, Xiaomi’s Redmi Note 4 has ranked number one in 91mobiles’ list of the most popular phones in the country. In fact, both the Redmi Note 3 and Note 4 (review) were awarded the budget phone of the year title in 2016 and 2017 respectively. And there’s no denying that the Redmi series has played an instrumental role in making Xiaomi the number one smartphone manufacturer in India in Q4 2017. And now that 2018 is here, the Chinese giant is introducing the latest smartphone in the range – the Redmi Note 5. As noted in our first impressions, the newest offering from the brand has big shoes to fill, as it not only has to carry the legacy forward but also has to ward off increasing competition in the segment. Perhaps that’s why Xiaomi adopted a two-pronged strategy this time, by launching the Redmi Note 5 and Redmi Note 5 Pro together. While the former was unveiled in its home market back in December 2017 as the Redmi 5 Plus and brought a bezel-less display for the first time in the series, the latter is a global launch in the subcontinent and brings enviable specs such as dual cameras and up to 6GB RAM.

While we’ll be talking about the Redmi Note 5 Pro separately, it’s now time to take a deep dive into the spiritual successor of the company’s best-selling smartphone in India – the Xiaomi Redmi Note 5. 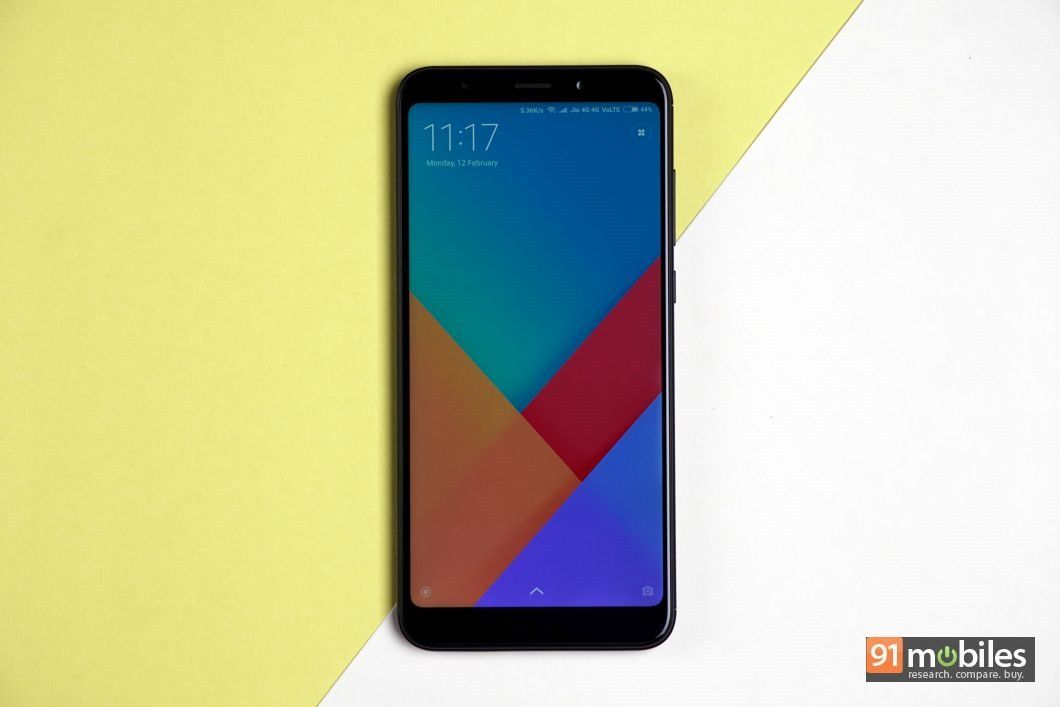 The Redmi Note 5 seems to be the perfect example of “don’t fix it, if it ain’t broke” mantra. While the smartphone joins the modern trend of bezel-free displays, its spec sheet is largely identical to its predecessor. That means that you get the same innards, a similar camera setup and similar battery capacity. In a spec-obsessed market like India, that’s certainly a risky strategy. But based on our experience with the smartphone for about a week, we believe it has paid off. Here’s why we think so.

Xiaomi was the first mainstream brand to make bezel-less displays a reality with the Mi Mix, and now it’s bringing them to the budget category. Having said that, the company hasn’t played around with the design much. The Redmi Note 5 just seems to be an elongated Redmi Note 3 or Redmi Note 4 with lower width. The Note 5 also is slimmer at 8.1mm as compared to 8.5mm waist of its predecessor. And while it seems to have added 15g weight to tip the scales at 180g, the weight has been well-distributed across the body.

The Xiaomi Redmi Note 5 flaunts a tall 18:9 display up front, with minimal bezels on the top and bottom. One difference between the previous Redmi Note smartphones and the Redmi Note 5 is the fact that the latter ditches capacitive buttons for virtual navigation keys. Otherwise, the placement of ports and controls remains same as its previous iteration. Sadly, that means that the device continues with the micro-USB port for charging and data transfers, which doesn’t seem to be future-ready as more and more phones are offering bi-directional USB Type-C ports.

While the design of the Redmi Note 5’s might seem unoriginal in today’s time, it certainly is solid. The metal-clad unibody construction also lends it class. Our review unit comes in an all-black hue, but the handset will also be available in gold, rose gold and Lake Blue options. The rear panel houses the primary camera at the centre in the top, with an LED flash and a fingerprint sensor below. Sadly, the back has a smooth finish and becomes quite slippery when the palms are sweaty. 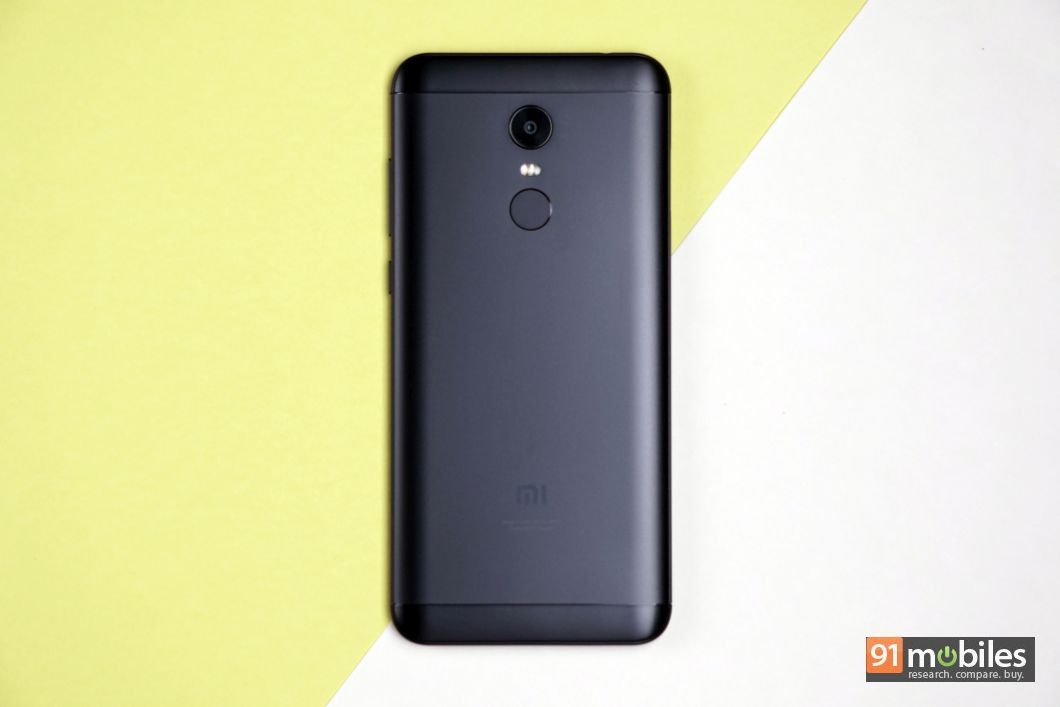 Thanks to the ultra-wide aspect ratio, the Note 5 display panel measures 6-inches diagonally (5.99-inches, to be precise). The IPS screen bears a resolution of 1,080 x 2,160 pixels, which results in crisp text and images. The colour reproduction is also accurate and eye-pleasing, and we didn’t find any issues in using it outdoors. It’s being protected by an unspecified layer of Corning Gorilla Glass. 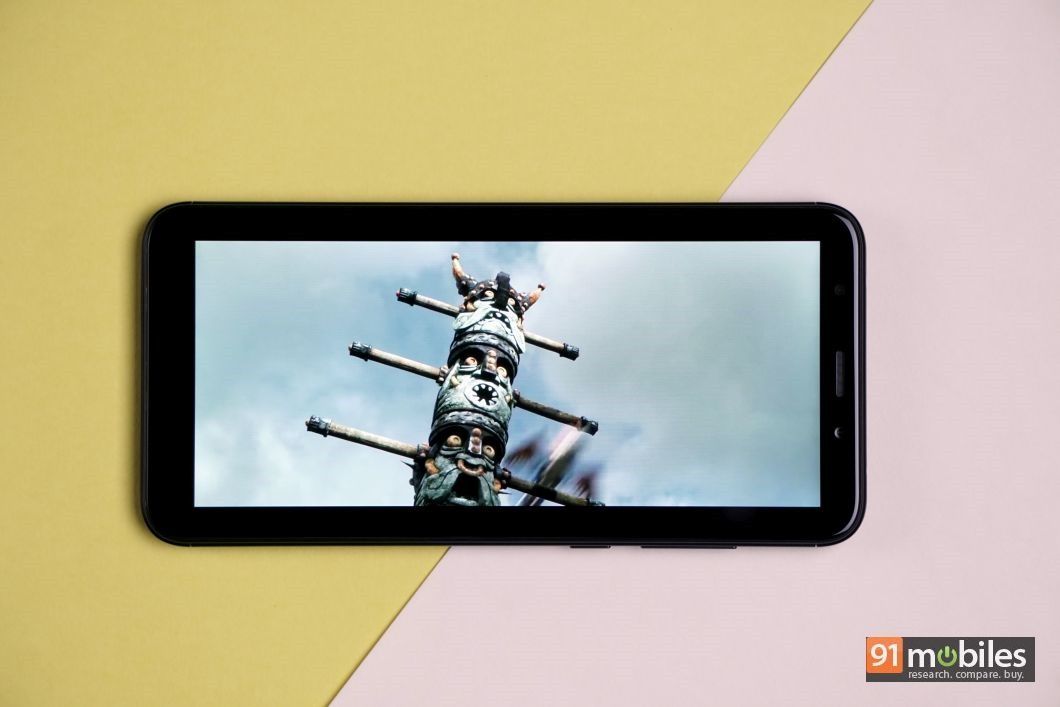 MIUI 9: remains a step ahead of Android

While Android has reached version 8, Xiaomi’s proprietary skin MIUI continues to be a step ahead (quite literally) at v9. However, it runs atop the previous edition of Android, i.e. 7.1 Nougat. MIUI is one of the most refined Android-based platforms out there, offering a slew of features on top of Google’s OS, while keeping the interface clutter-free. You get a unified homescreen and app drawer, and customised icons. The latest version of MIUI brings a lot of changes behind-the-scenes, such as better app launch times, dynamic resource allocation, cache management, etc. And it totally lives up to its lightning fast tagline. It surely seems to be smoother and more refined than the previous iterations of Xiaomi’s proprietary UI. Earlier available for the Mi Max 2 (review), the newest version of MIUI also offers split-screen functionality, allowing you to open two apps together in perfect squares, thanks to 18:9 aspect ratio. 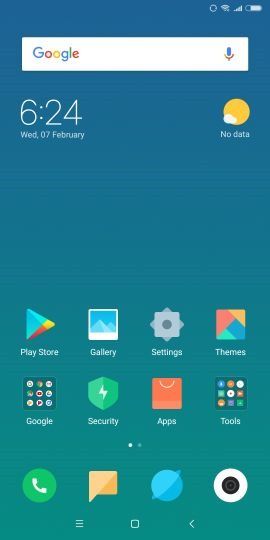 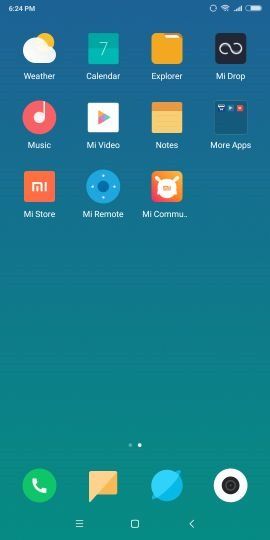 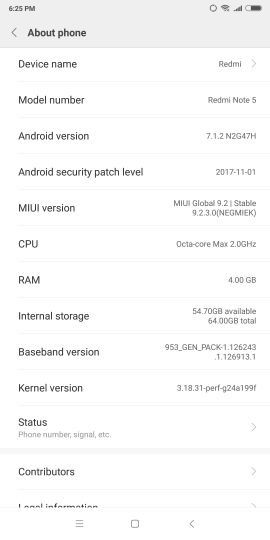 In terms of visual changes, the biggest inclusion is the left-most screen in the homescreen. Dubbed App Vault, it offers app shortcuts, lets you book an Ola cab directly, displays calendar events, among other things – kind of a cross between OnePlus’ Shelf feature and YU’s Around screen. There are hardly any preloaded apps on the smartphone, except for Amazon, Hungama and WPS Office. 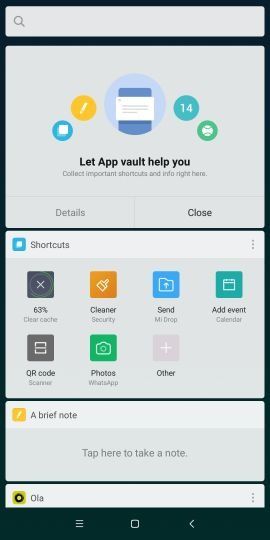 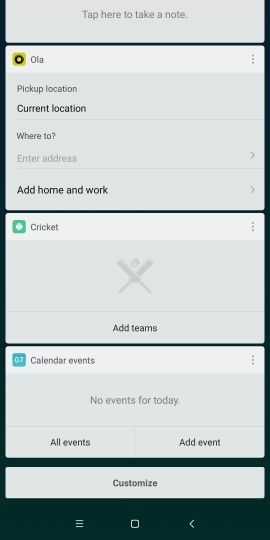 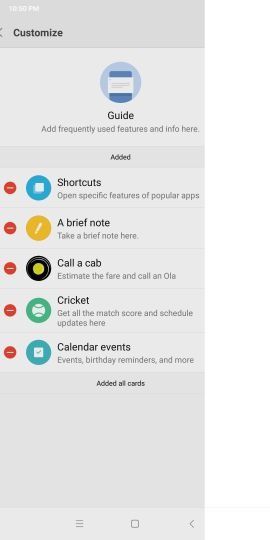 Imaging: no dual camera this, but still quite capable

While the Redmi Note 4 offered a 13MP camera, its successor sports a 12MP camera. However, it has bigger pixels (1.25μm vs 1.12μm), but a smaller aperture of f/2.2 (as compared f/2.0 aperture). It’s supplemented by a dual-tone LED flash to assist in low-light conditions. At the front, the phone features an 8MP selfie camera. The camera interface is simple, with just the basic options up front, and the remaining modes hidden under options. These include usual modes such as panorama and manual (you can only tweak ISO and exposure, however), as well as scene detection, tilt-shift, etc. 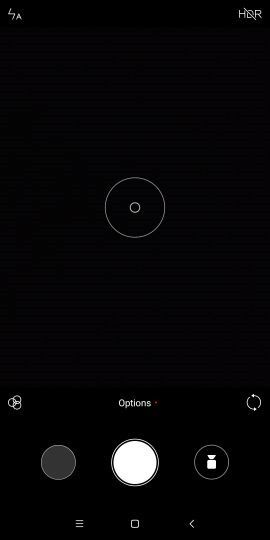 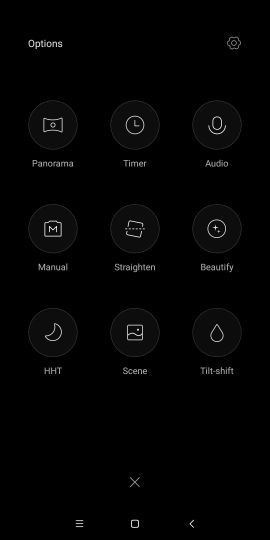 Coming to the camera performance, the Xiaomi Redmi Note 5 locks the focus on the subject quickly thanks to PDAF. Although, the shutter speed isn’t the best. Quality-wise, long shots offer an incredible level of details and images show natural colours. The HDR mode also proves to be quite effective and adds life to stills. In close-ups, the device manages to offer sharp results without any noise. Sadly, like most cameras, its Achilles’ heel is dim lighting, where it struggles badly. While the flash comes in handy in such situation, the pictures show a lot of grain. The same story continues in the selfie camera as well, though you get a flash at the front as well. Take a dekko at the camera samples of the Redmi Note 5.

The videos shot by the Note 5 are quite good, if your hands are stable enough as it lacks any sort of stabilisation. Overall, the Redmi Note 5 offers a good camera setup. But it falls behind the rivals such as the Honor 9 Lite and 10.or G flaunt dual rear cameras (with the former having a pair of sensors at the front as well) offering interesting features such as depth-of-field effect.

As aforementioned, the internals of the Redmi Note 5 are exactly same as its previous avatar. While the Snapdragon 625 is a reliable chipset which balances performance and battery efficiency quite well, it’s more than a year old and Qualcomm’s SD6xx series has already seen newer additions such as the SD630, SD6363 and SD660. As a matter of fact, the Note 5’s own sibling, the Xiaomi Redmi Note 5 Pro draws power from Snapdragon 636 chipset. Having said that, during our use, the smartphone performed quite well, even while playing high-end games like Asphalt 8: Airborne and Hitman Sniper. The graphics were smooth and there were no frame drops either, though we did notice slight jitter here and there while racing in Asphalt 8. The good thing however, is the fact that the device maintains its cool even after long sessions of gaming, and using intensive tasks such as GPS. 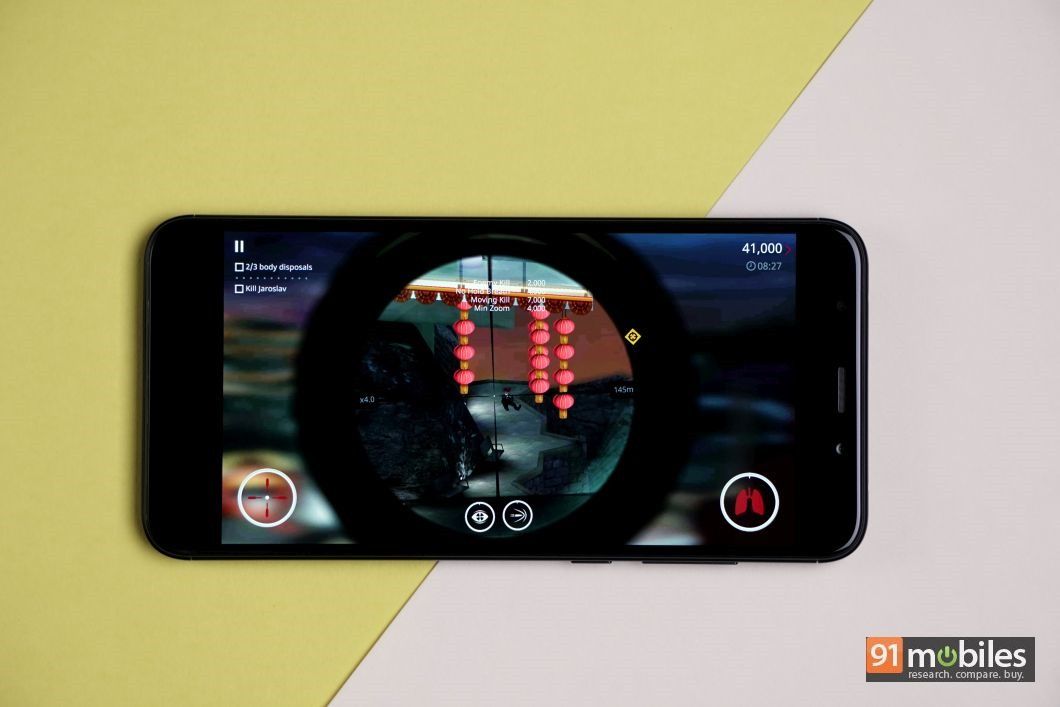 Unlike the Redmi Note 4, the base variant of the Redmi Note 5 ships with 3GB of RAM, while the higher-end model features 4 gigs of RAM. We reviewed the latter, and were able to switch between multiple apps in a jiffy. Based on the RAM variant, the device will offer 32GB or 64GB of storage onboard. In our review unit, the smartphone had around 55GB of space left after accounting for OS and other resources. 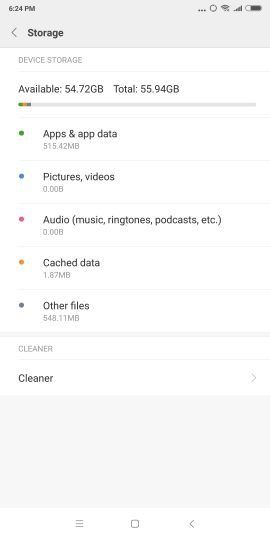 Connectivity-wise, the smartphone offers support dual-SIM cards, with the secondary being a hybrid slot. The phone offers 4G VoLTE, Bluetooth 4.2, Wi-Fi and GPS.

One of the biggest highlights for the devices in the Redmi Note series is the battery life. The same remains the case with the Xiaomi Redmi Note 5, which draws power from the 4,000mAh battery. Charged at 100 percent at 8 in the morning, it was easily able to continue till the next day even with the use of 4G, GPS, streaming podcasts, using camera along with around 30 minutes of voice calls. We were able to get around 5 hours of screen-on time, which is quite impressive. In the 91mobiles battery test, the phone played a 720p video on loop for more than 20 hours, with only cellular connectivity enabled, and both brightness and volume levels set at 50 percent. 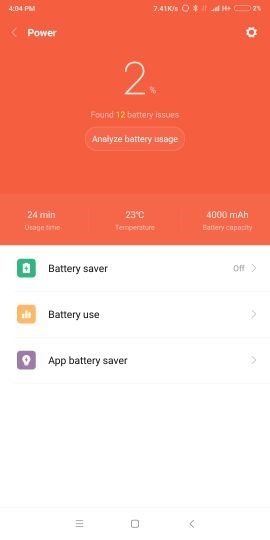 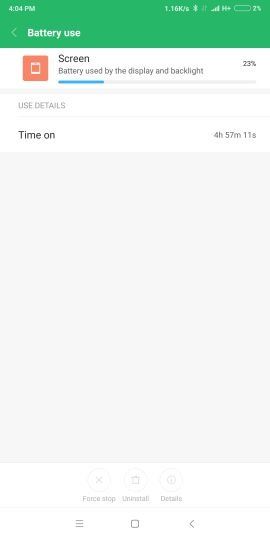 Strangely enough, like previous offerings in the Redmi series, Xiaomi isn’t offering quick charge functionality with the Redmi Note 5. The device ships with a 2A charger, which takes a little over two hours to juice it up fully.

If you already own a Redmi Note 4, there’s a little reason to upgrade to its forerunner unless you want a bezel-less form factor. But if you really want to change your phone, we’d suggest going for the Redmi Note 5 Pro, which offers better internals and dual cameras at a slightly higher price point. For others, like every Redmi smartphone, the Xiaomi Redmi Note 5 is a solid value-for-money offering with dependable performance, decent cameras and a great battery life – in a futuristic avatar with minimal bezels at the fascia. The 3GB RAM variant is priced the same as the last year’s base model – Rs 9,999, while the higher-end version will retail at Rs 11,999. 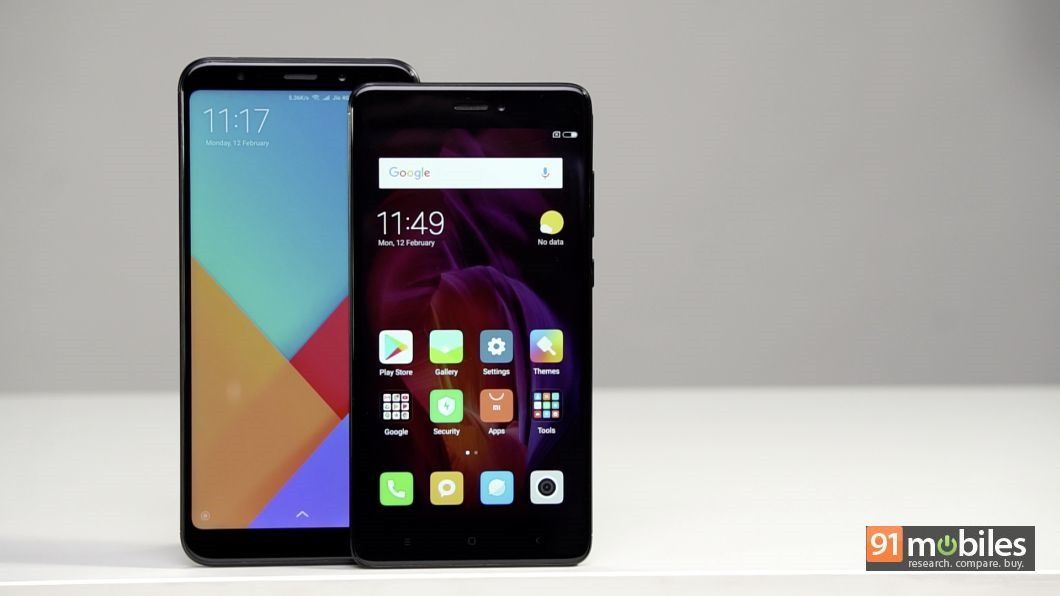 Unlike previous years however, Xiaomi’s Redmi Note series isn’t a trendsetter, and it’s actually trailing the competition. It’s toughest rival is the Honor 9 Lite (review), which not only brings a bezel-less display and a stand-out glass-sandwich design, but also offers a quad-camera setup. That said, Xiaomi’s latest scores in the battery department when compared to Honor’s offering. Another competitor is the 10.or G, which offers almost the same specs as the Redmi Note 5, but adds dual rear cameras to the mix. 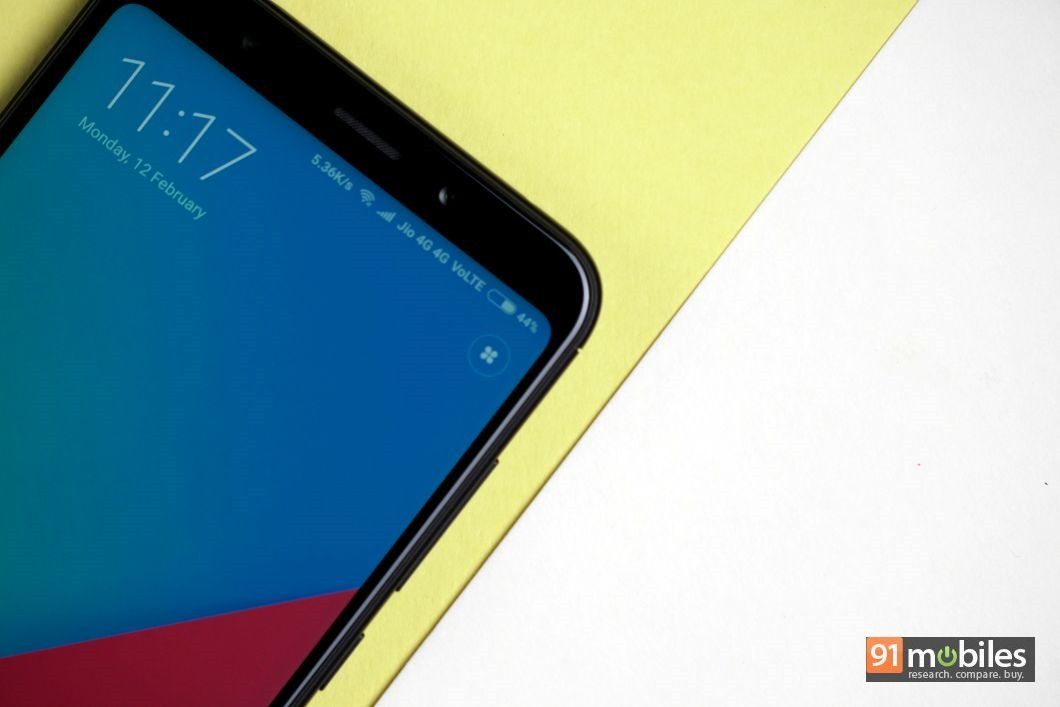 All said and done, none of the competitors can match the brand equity that Xiaomi has built in such a short span of time, and if you are looking for a smartphone priced under Rs 12,000, the Redmi Note 5 is hard to ignore.