Last year, the editorial team at 91mobiles reviewed seven different smartphones from Chinese manufacturer Honor. The devices ranged from entry-level offerings to flagship-grade smartphones and barring a select few, most of them left a positive impression on us. Suffice it to say, Honor really stepped up its game in 2018 and to kickstart the new year, the brand recently announced a new mid-ranger in the country. Dubbed the Honor 10 Lite (first impressions), the smartphone ships with an eye-catchy design, dual-cameras… basically the whole shebang. But, does it do enough to sway buyers away from the competition? Well, let’s find out in this review.

Honor has a knack for designing stunning affordable smartphones which can even put some high-end devices to shame with their gorgeous aesthetics. The Honor 10 Lite builds upon the brand’s legacy and can be seen sporting a glossy gradient finish towards the back, which is striking, to say the least. Now, if you don’t like loud colours, then you may not prefer the shade of my review unit, which shipped in a bright blue hue. However, I quite fancy the design of the device, and in any case, the phone’s available in a more sedate black too. Even though the finish doesn’t shift colour when I tilt the smartphone, it still comes across as unique and different. 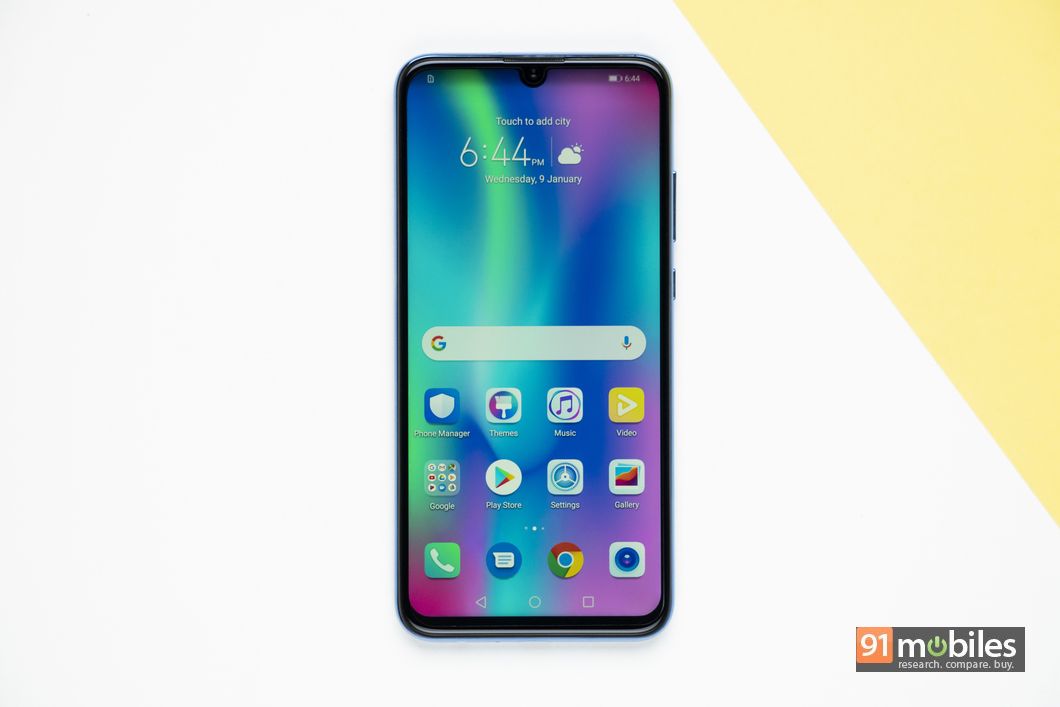 Unfortunately, while I loved the overall look of the smartphone, the in-hand feel leaves something to be desired. You see, the 10 Lite is made out of plastic, which does feel a tad, err… plasticky. Thankfully, the handset’s curved back makes for an excellent grip. So much so, you need not invest in a third-party case as I rarely felt the device slip from between my fingers. 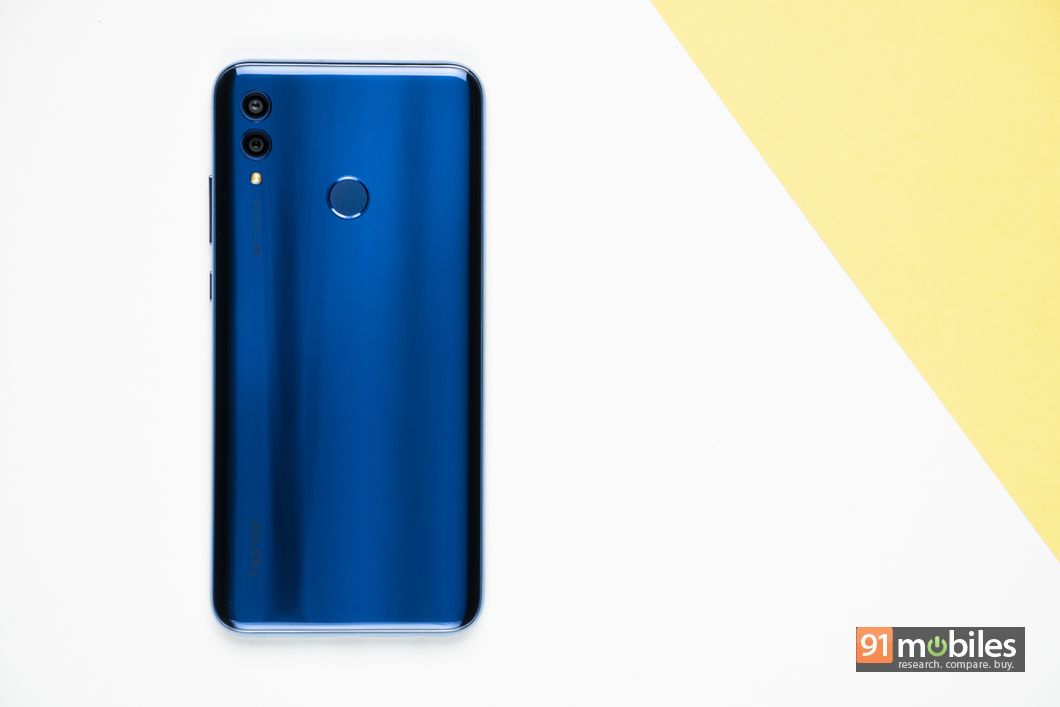 The physical buttons positioned on the right spine of the device felt adequately tactile too, and the fingerprint sensor at the back has been positioned in such a way that it comfortably aligned with my index finger. As for the accuracy of the sensor, I didn’t face any issues unlocking the device in one go, though it does feel a tad bit slow. Every time I tapped my finger on the sensor, the smartphone took a second before the screen lit up. 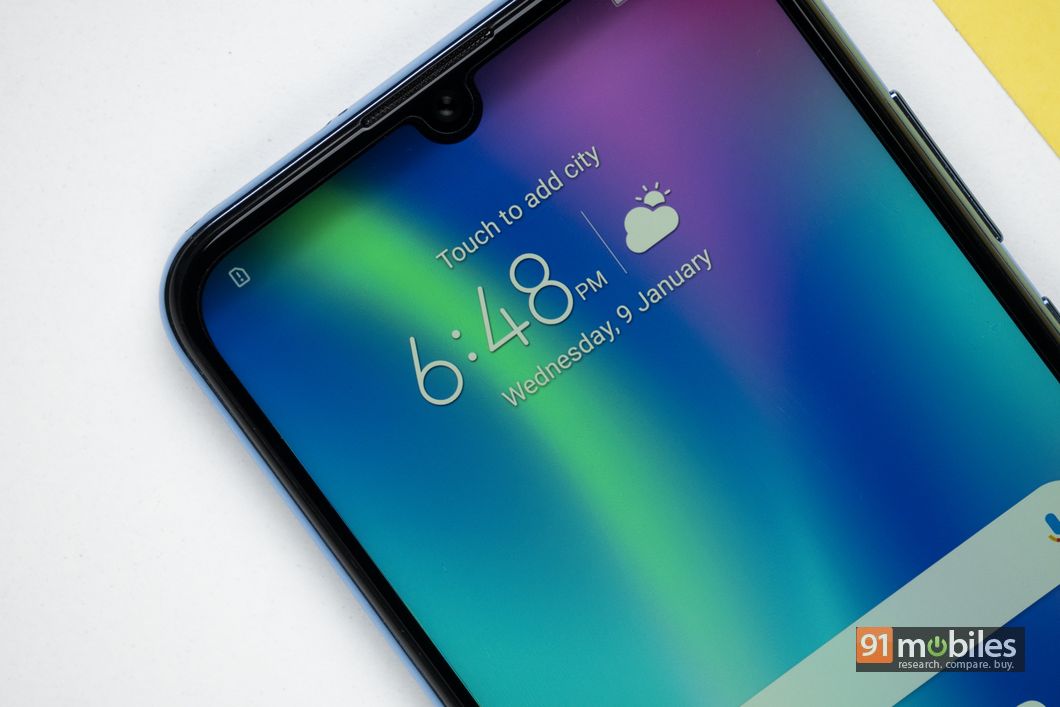 Honor does include face unlock with the device, which in my experience, is a much more convenient way to unlock the device. Notably, the screen automatically wakes up when you lift the smartphone, and therefore, you won’t have to press the power button to trigger face unlock… making the process seamless. 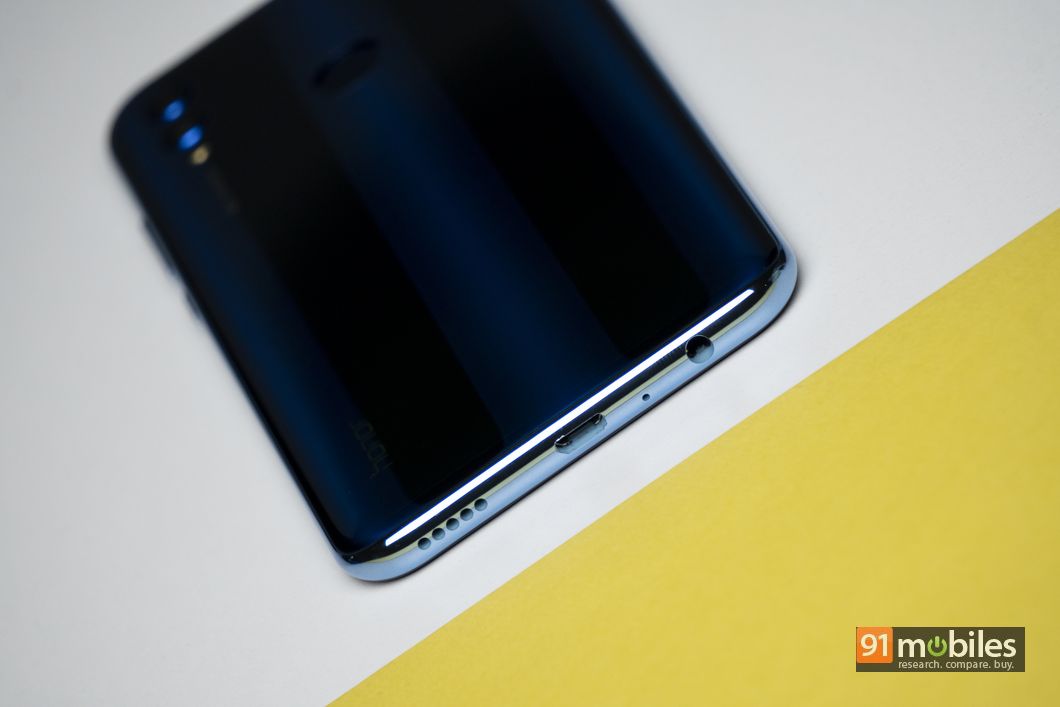 The Honor 10 Lite ships with a micro-USB port for charging, which is a bit disappointing when you take into consideration that similarly priced devices like the Xiaomi Mi A2 (review) feature a more modern, Type-C port. Thankfully, the device retains the headphone jack which means you’ll be able to plug in just about any pair of 3.5mm headphones into the smartphone to listen to music. 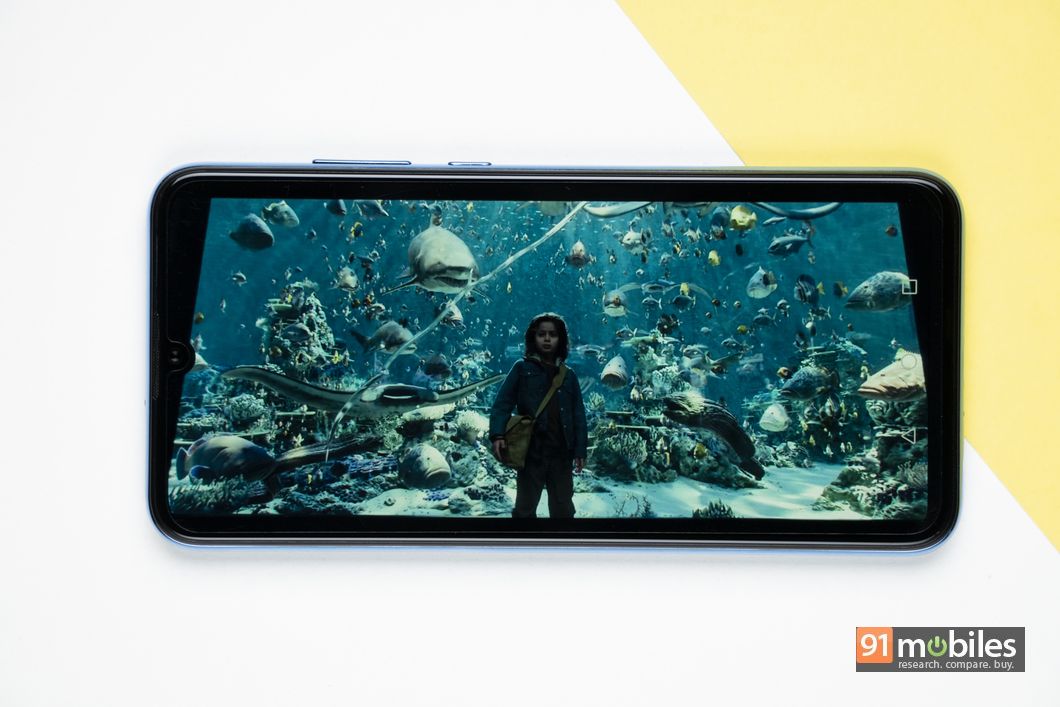 Let’s face it – for most people, smartphones have all but replaced TVs as the primary means to consume media. Therefore, it comes as no surprise that buyers seek smartphones with vibrant, high-resolution panels. To that extent, the Honor 10 Lite doesn’t disappoint. The smartphone ships with a 6.21-inch FHD+ IPS LCD display with an impressive screen-to-body ratio of 91.25 percent. To achieve the staggering screen real estate without increasing the overall dimensions of the device, folks at Honor have trimmed down the bezels surrounding the display and have opted for a subtle dewdrop notch, positioned at the centre. Much to my surprise, despite shipping with an LCD panel, the Honor 10 Lite exhibited punchy, tasteful colours which made using the smartphone a treat to the eyes. Moreover, the panel gets sufficiently bright outdoors and therefore, you’ll not have to squint your eyes to see what’s on the display.

Gone are the days when buyers had to settle for a so-so camera when buying an affordable smartphone. Devices like Xiaomi’s Mi A2 and the Realme 2 Pro are a testament to the fact that one need not splurge on their next device to get a spectacular camera. Can then, the Honor 10 Lite prove its mettle in the photography department and stand out? Well, before I talk about the camera quality, let’s get the specs out of the way. 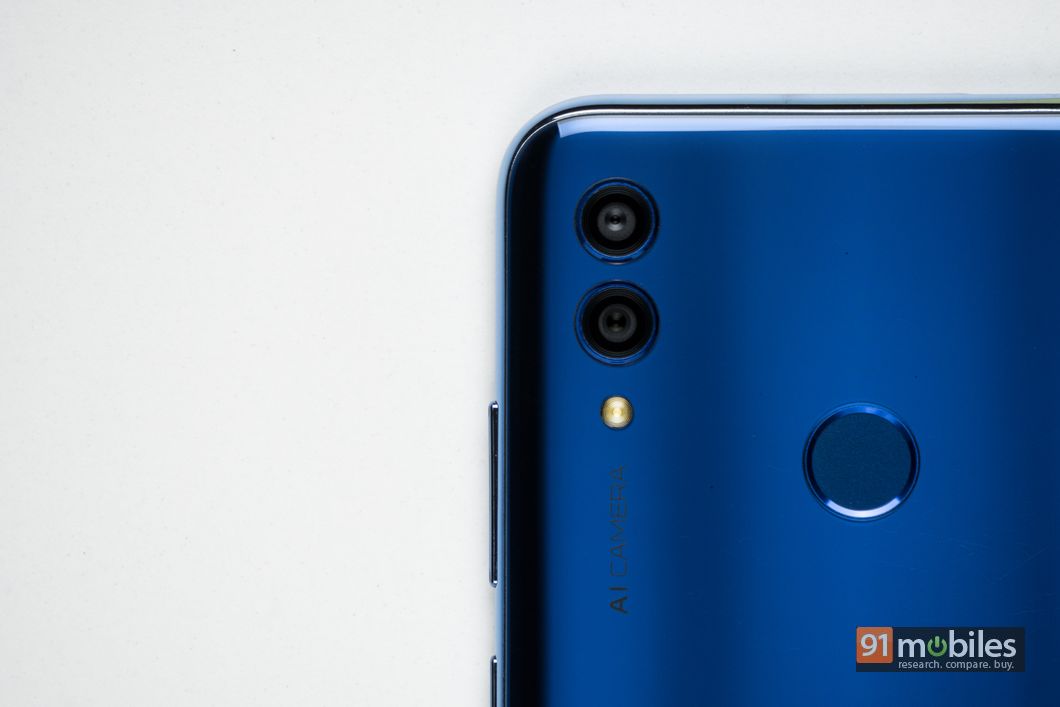 The Honor 10 Lite ships with a dual-camera setup at the back comprising 13MP and 2MP sensors with f/1.8 and f.2.4 apertures respectively. For selfies, the handset comes with a 24MP f/2.0 snapper. As is the case with most other smartphones from the company’s stables, the Honor 10 Lite makes use of AI to automatically choose from various scenes and adjust the camera settings accordingly. The camera app is feature-rich, fairly straightforward to use and comes with various photo modes, including portrait, beauty and night mode. 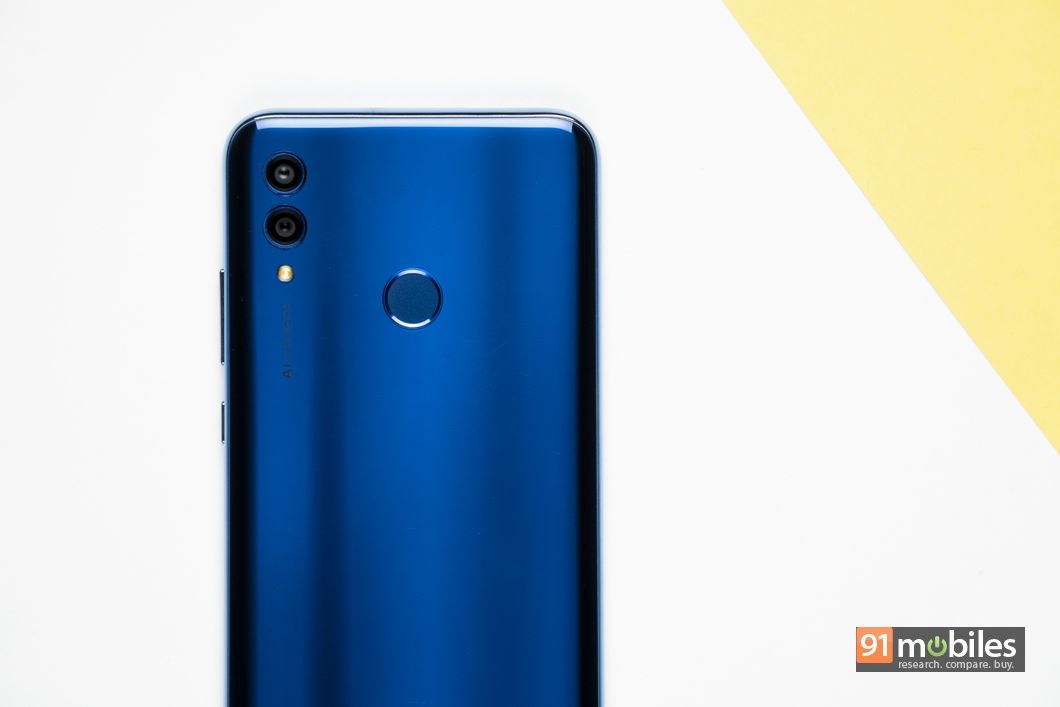 Coming to the quality of the rear-facing cameras, the Honor 10 Lite can at times surprise you with incredible shots. However, I did encounter some issues whilst taking photos with the device. For starters, the camera has a few exposure issues and you might need to manually tweak the settings to take care of that. Secondly, the portrait mode is a tad iffy, and as can be seen from the sample shots I clicked with the device, the blur effect is not seamless. Then there’s the unnecessary beautification and the fact that the shots taken with the AI enabled looked oversaturated. That said, the AI mode captures a regular photo too, so you could just use that if you don’t like what you see with the feature turned on.

There is some light at the end of the tunnel. As I mentioned previously, some shots I took with the Honor 10 Lite really did take me by a surprise. For instance, if you’re the type who likes to take close-ups, then you’ll find yourself right at home with the 10 Lite as the macros I clicked with the smartphone were evenly exposed and rich in detail. Moreover, the AI scene recognition does wonders for architectural photography as it adds a much-needed boost to dull and muted colours of buildings. In low-light scenarios, the handset’s night mode does a mighty fine job of stabilising the image and snapping a sharp, detailed photo. 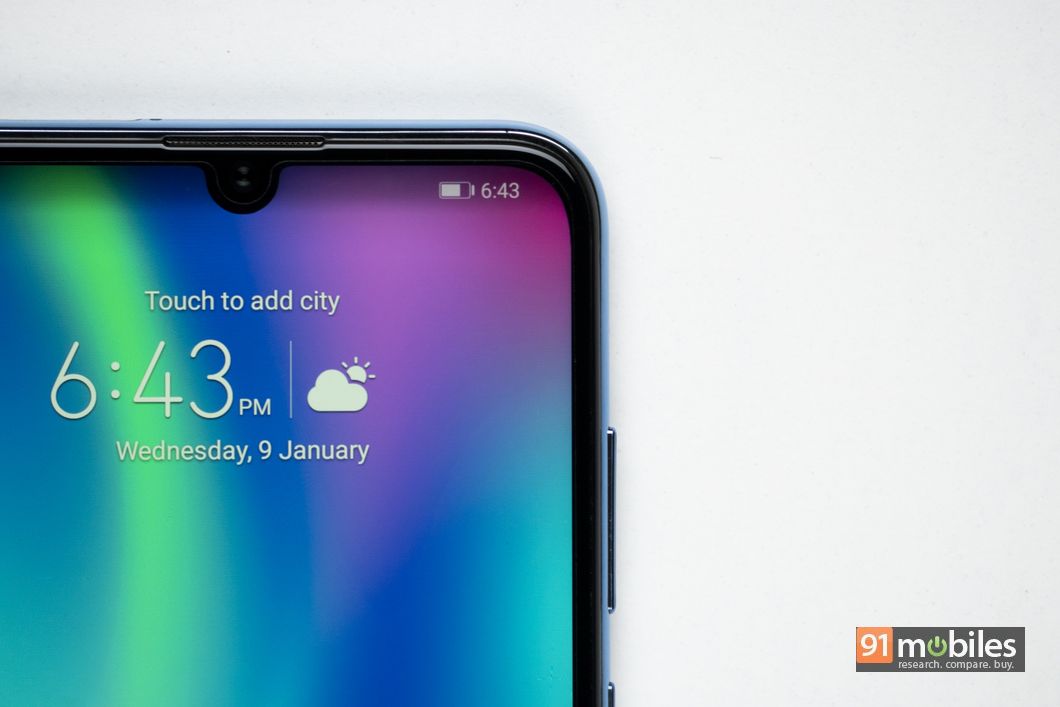 I was extremely satisfied with the smartphone’s selfie camera too. Now, you’ll want to turn off the AI scene detection whilst clicking selfies if you want your portraits to captured showing your natural skin tone. However, with the setting disabled, you can get away with some incredible-looking self-portraits which look pleasing to the eyes. At night, the handset’s built-in screen flash functionality kicks in, which should help you salvage a half decent selfie in darkness.

The Honor 10 Lite is backed by Huawei’s in-house Kirin 710 processor which works alongside 4GB of RAM and 64GB of user-expandable storage. During my time with the device, I seldom ran into stutters while navigating through the UI. Apps opened swiftly and despite shipping with just 4GB of RAM, multitasking was buttery smooth too, as the device managed to keep half a dozen apps in memory at any given moment. 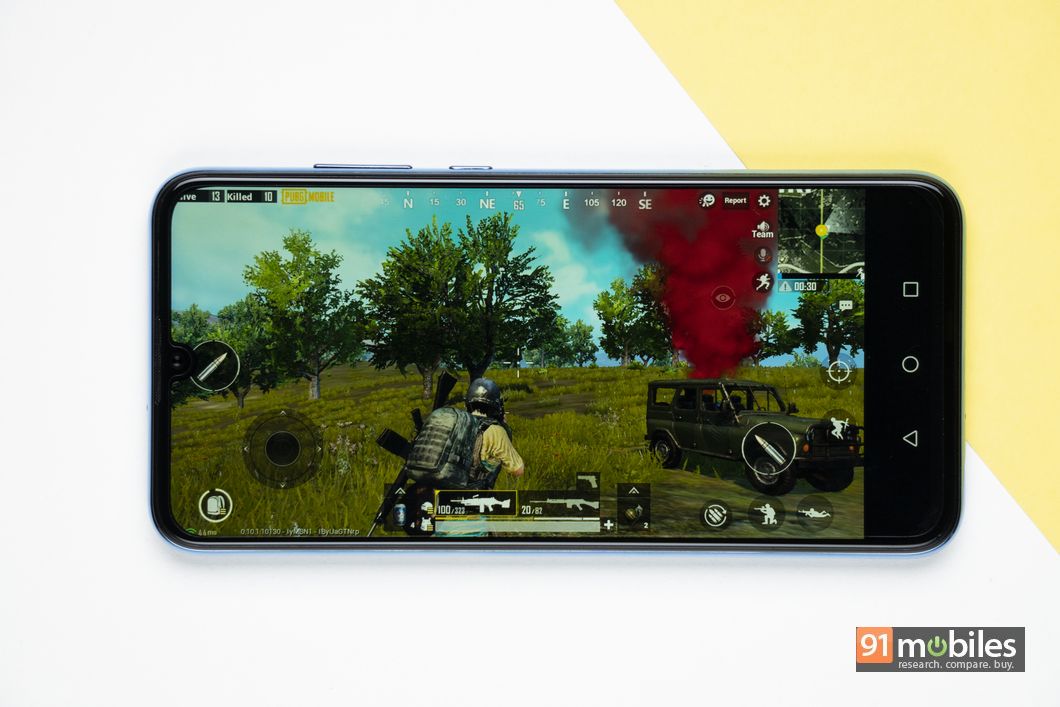 That said, playing intensive titles like PUBG isn’t a very smooth experience on the Honor 10 Lite. While the smartphone comfortably managed to run the game on medium graphics setting, there were noticeable frame drops during the heat of a battle. On the flip side, casual games like Dead Warfare, PAKO Forever, and Go Plane worked flawlessly on the device. 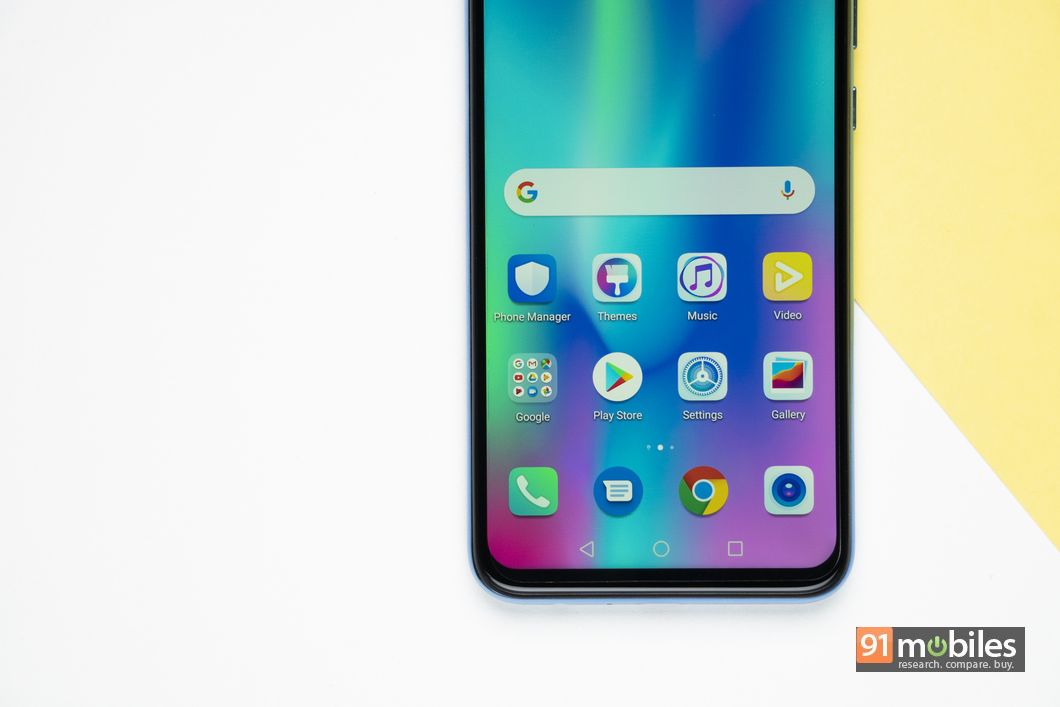 On a related note, the smartphone’s software doesn’t play well with certain games and applications. For instance, in PUBG, a good chunk of the device’s display was blacked out. While you can force the smartphone to run games in full-screen mode, it might lead to app crashes and display errors.

The Honor 10 Lite is fuelled by a 3,400mAh battery which lasted a full day on moderate usage. However, I found myself reaching for the charger whenever I pushed the smartphone too hard. In our battery test, the smartphone drained completely in 13 hours, which is a decent result, but I expected more out of the handset’s 3,400mAh cell.

Coming to the software, the Honor 10 Lite boots Android Pie with a custom skin of EMUI v9 on top. If you’re not a fan of third-party skins, then EMUI will do little to change your opinion. It’s quite a way from stock Android and comes riddled with a bunch of bloatware and Honor’s own applications, most of which cannot be uninstalled. On the bright side, you do get some nifty features with the skin, such as the ability to mute incoming notifications by flipping the device and a full-fledged theme store to satiate all your customisation cravings.

The Honor 10 Lite is expected to be priced between Rs 13K to Rs 14K, which pits the device against smartphones like the Realme U1 (review), the Realme 2 Pro (review), the ASUS ZenFone Max Pro M2 (review) and the Xiaomi Mi A2. While the Honor 10 Lite has a lot going for it, including a good-looking design and dependable performance, it does little to stand out from the herd of other compelling choices. That said, my verdict could change if the smartphone is priced more competitively.

I’ll make sure to update this review when the device launches and we get to know it’s exact pricing.