“Our review of Honor’s latest flagship – the Magic 2”

For the better part of 2018, Android manufacturers have been trying to find clever solutions to a problem of their own making – the notch. While it was THE feature on smartphones a year or so ago, it seems like the hype around a device which ships with a cut-out has all but died down. This has given rise to smartphones like OPPO’s Find X (first impressions) and Vivo’s Nex (review), which used motorised components to hide the selfie camera inside the device’s chassis. Some smartphone brands like Nubia ditched the front camera altogether and slapped a screen at the back of the device, allowing buyers to take selfies using the primary cameras. 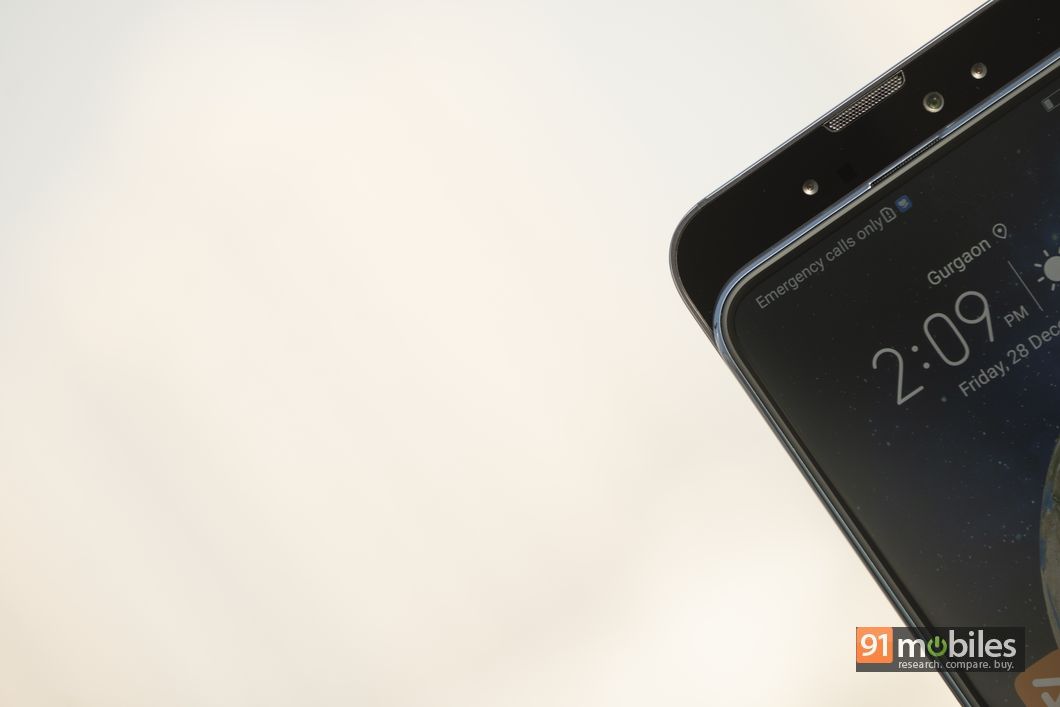 Then, there are smartphone brands like Xiaomi and Honor, who’re tackling the issue in the most retro-inspired way possible – by adding a sliding mechanism on their devices. I recently got my hands on the Honor Magic 2 (first impressions) smartphone, which was recently unveiled in China and after spending some time with the device, here’s what I make of it.

As its moniker suggests, the Honor Magic 2’s design is…magical, to say the least. On the face of it, the handset does little to differentiate itself from the herd of other premium flagships in the market. You see, akin to other premium flagships, the Honor Magic 2 has been constructed using a mix of glass and metal and it too features an exquisite gradient finish, the likes of which you might’ve seen on Huawei’s Mate 20 Pro (review). Furthermore, similar to most other glass-back smartphones, the Honor Magic 2 also features a curvy back and ships with tapered edges, which not only enhance the device’s looks, but also make it more manageable to use with just one hand. 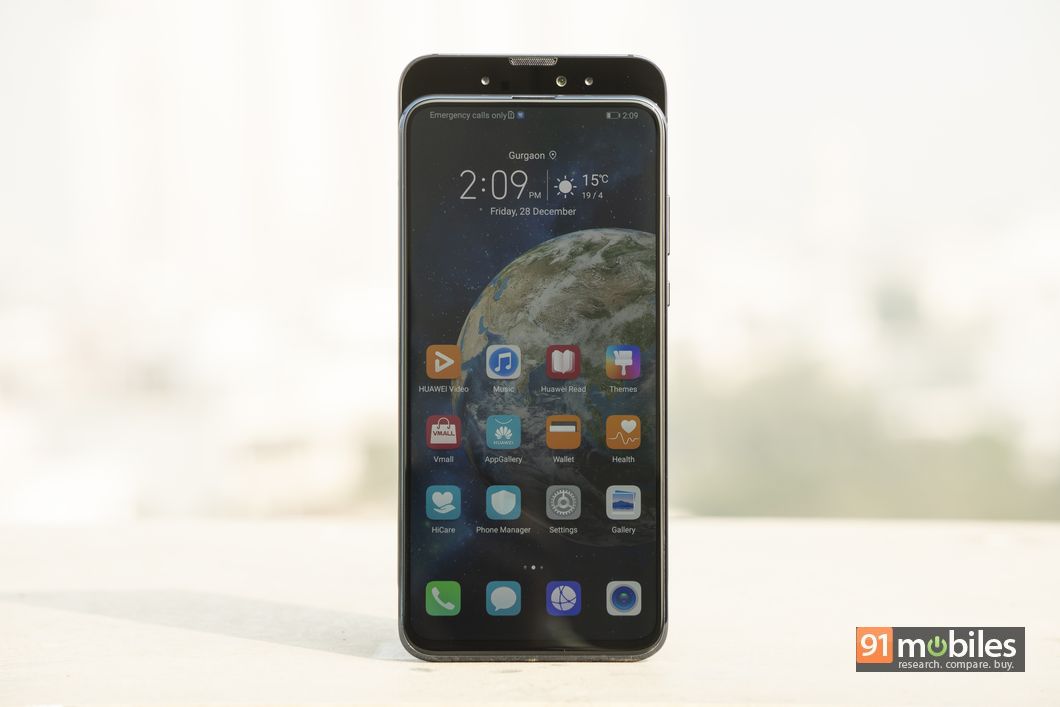 That said, the smartphone’s USP is the presence of a sliding mechanism which opens to unveil the handset’s triple selfie camera setup. If you’ve ever used a slider phone growing up, then you’ll undoubtedly be hit by a train of nostalgia when using the Honor Magic 2 – only this time around, you’ll be pushing the display downwards. 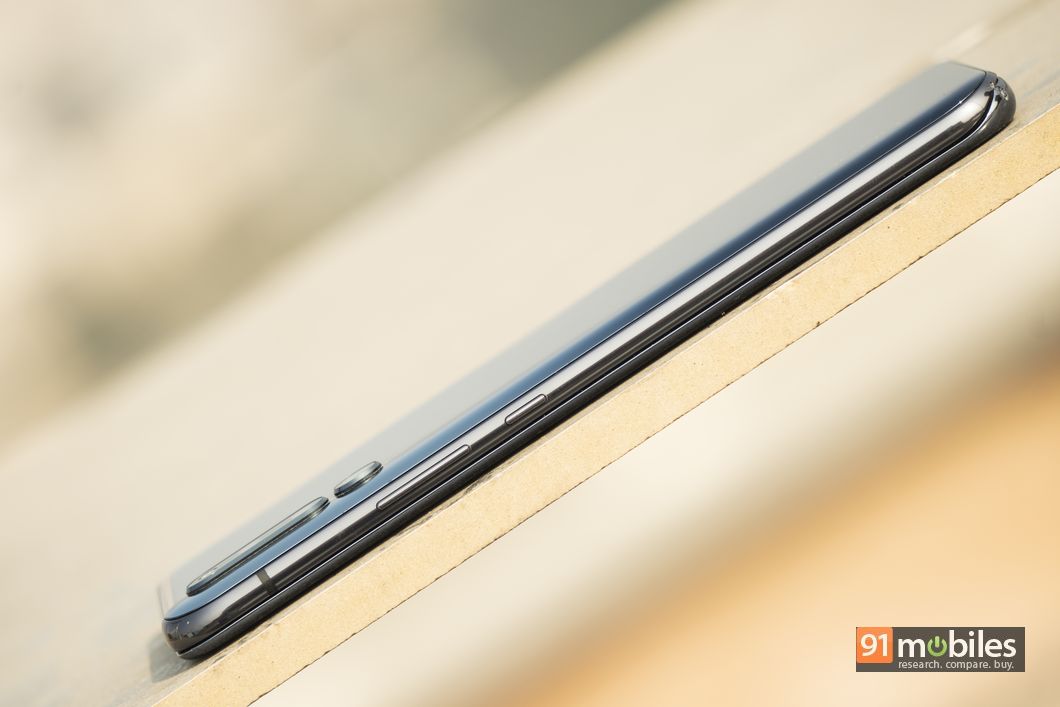 While the sliding mechanism is cool, it does raise concerns about the handset’s longevity. Naturally, I did what any logical person would do – slid the mechanism up and down numerous times the minute I got my hands on the phone. For what it’s worth, the slider on the Magic 2 feels just as sturdy and provides just as much friction as it did on day one. In fact, I’m convinced that the smartphone’s slider will stand the test of time, provided you don’t accidentally drop it on concrete. Unfortunately, the presence of moving parts does mean that the Honor Magic 2 is not dust or water resistant. So, don’t take it near a pool, maybe? 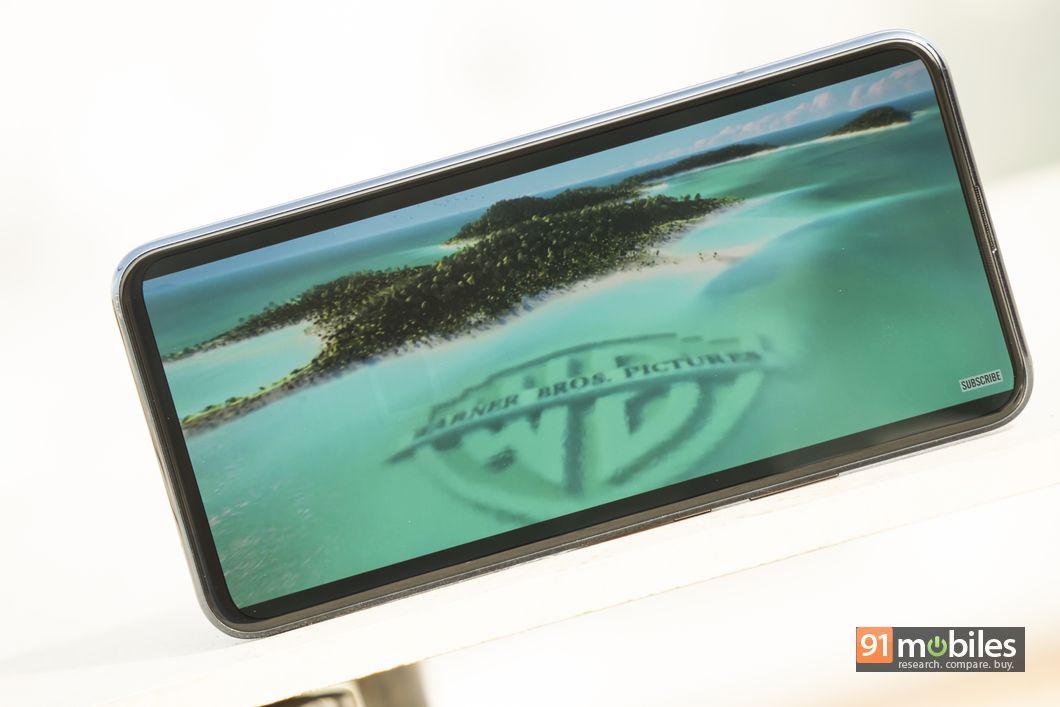 Now that I’ve addressed the drawback of using a sliding mechanism on a smartphone, allow me to shed some light on the benefits. By hiding the selfie camera(s) inside its chassis, the Honor Magic 2’s front is dominated by a massive 6.4-inch FHD+ display which is devoid of any bezels and offers a screen-to-body ratio of nearly 100 percent. Sure, you’ll get a small chin at the bottom but compared to other smartphones, the Magic 2’s panel feels surreal. Just look at the design shots and tell me you’re not impressed! 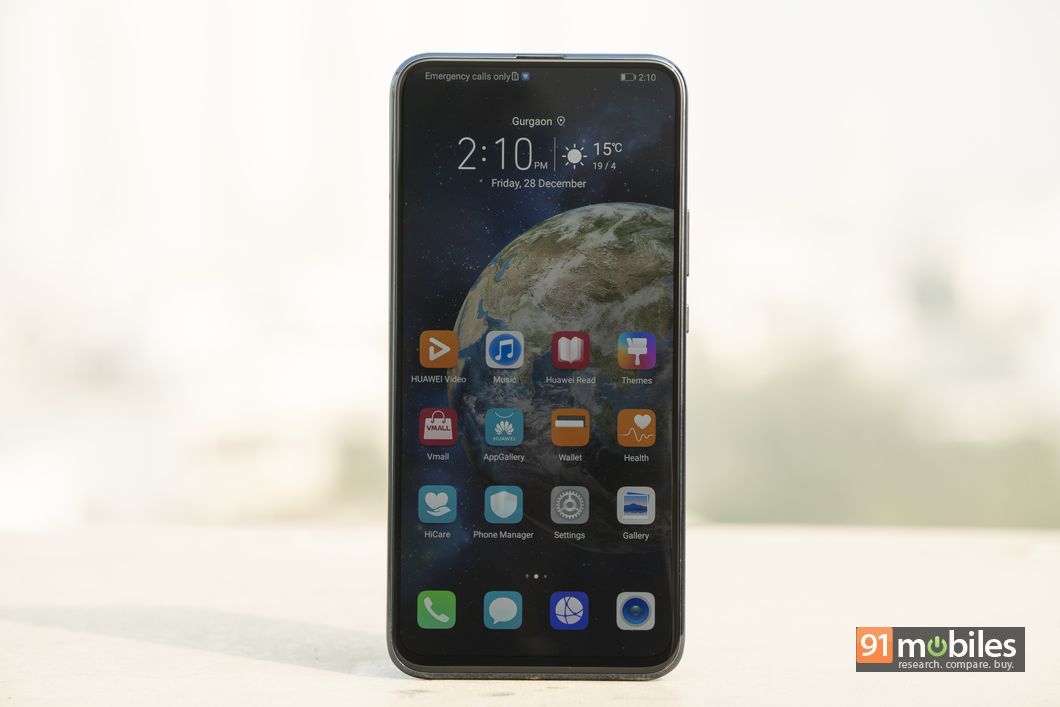 What’s more, since the display is AMOLED, you’ll be able to feast your eyes on crisp blacks and vibrant hues whilst watching movies on the smartphone. Quite frankly, I all but stopped using my Galaxy Tab S4 to stream Netflix when I had the Magic 2 in my pockets. On a related note, I was immensely satisfied with the panel’s legibility under direct sunlight and didn’t notice any colour shifting issues when I was viewing the display at different angles.

Before I talk about the smartphone’s performance, I’d like to shed some light on some other design elements of the Honor Magic 2. Much like many other phones launched in late 2018, the Honor Magic 2 also ships with an in-display fingerprint sensor. After putting the sensor through its paces, I can confirm that it’s slightly better than what you’d get on a OnePlus 6T (review), but it’s still no match for a capacitive fingerprint sensor. Thankfully, you do get face unlock with the smartphone which is plenty fast and quite accurate too. However, you’ll have to readjust your grip every time you slide the display downwards, as we pointed out in our first impressions of the smartphone. Regardless, once you get the hang of it, the process will feel extremely fluid. 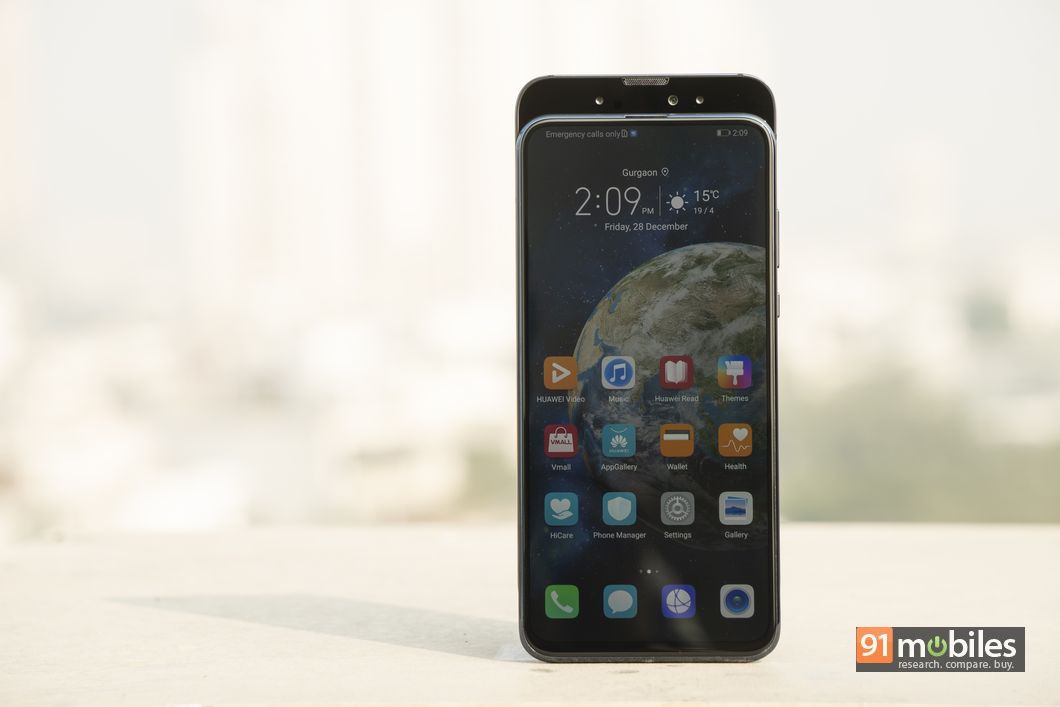 Sadly, there’s no headphone jack on the Honor Magic 2 which means you’ll have to plug in a dongle every time you want to connect a pair of 3.5mm headphones. Moreover, since the earpiece is hidden behind the sliding mechanism, the voices will come across a bit muffled during calls. Annoyingly enough, you cannot answer phone calls by sliding the display downwards, which would’ve easily solved this issue.

The Honor Magic 2 isn’t just a smartphone with a slider, but it’s also a smartphone with six camera sensors. The handset ships with three cameras on the back, and another three on the front. Let’s talk about the specs of the rear-facing sensors first. From top to bottom, the handset features a 16MP RGB sensor with f/1.8 aperture, a 24MP monochrome sensor with f/1.8 aperture and a 16MP wide-angle lens with f/2.2 aperture. The front-camera layout comprises a 16MP main shooter with f/2.0 aperture which is flanked on either side by 2MP depth sensors. 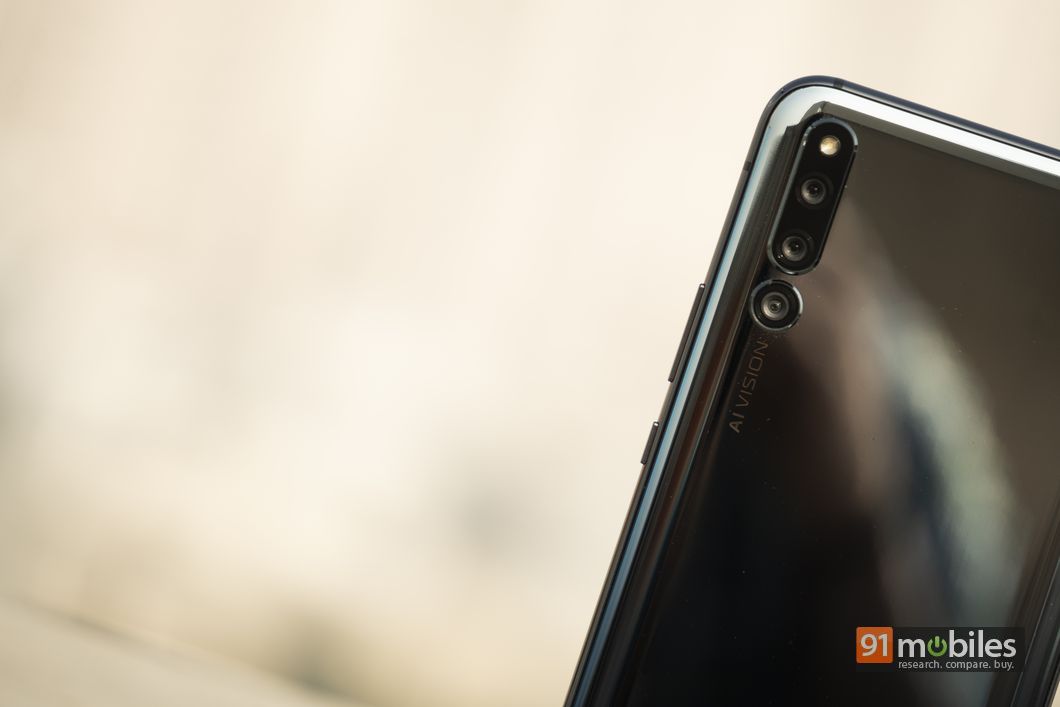 AI has been the buzzword in the smartphone industry for a hot minute now, and Honor’s Magic 2 too employs artificial intelligence to better the output of photos. During my time with the device, I noticed that for the most part, pictures I clicked with the AI enabled turned out better and exhibited punchier colours. Consequently, I didn’t tinker with the settings and let the Magic 2 do its magic.

As for the quality of the images, the main 16MP shooter at the back clicks really good, flagship-grade images. You wouldn’t find the camera lacking in any department per se – pictures clicked in broad daylight have ample amounts of detail, sharpness and good dynamic range. At night, the smartphone cleverly detects that it’s dark outside and with the help of some software wizardry, clicks excellent lowlight shots.

The wide-angle lens will help you paint on a bigger canvas, though there’s noticeable barrel distortion in the images. Take for instance, the sample shot I’ve attached where you can clearly tell that the lamp post is slanting inwards. You’ll notice a similar theme across other wide-angle shots taken with the Magic 2 as well. Therefore, unless taking a few steps back mean you’ll plummet off a cliff, I’ll recommend you not use the wide-angle shooter on the smartphone. On the flip side, the handset’s portrait mode does a good job of differentiating the subject from the background and my only qualm with the feature is that the images are noticeably softer than the ones I clicked in normal mode with the device. 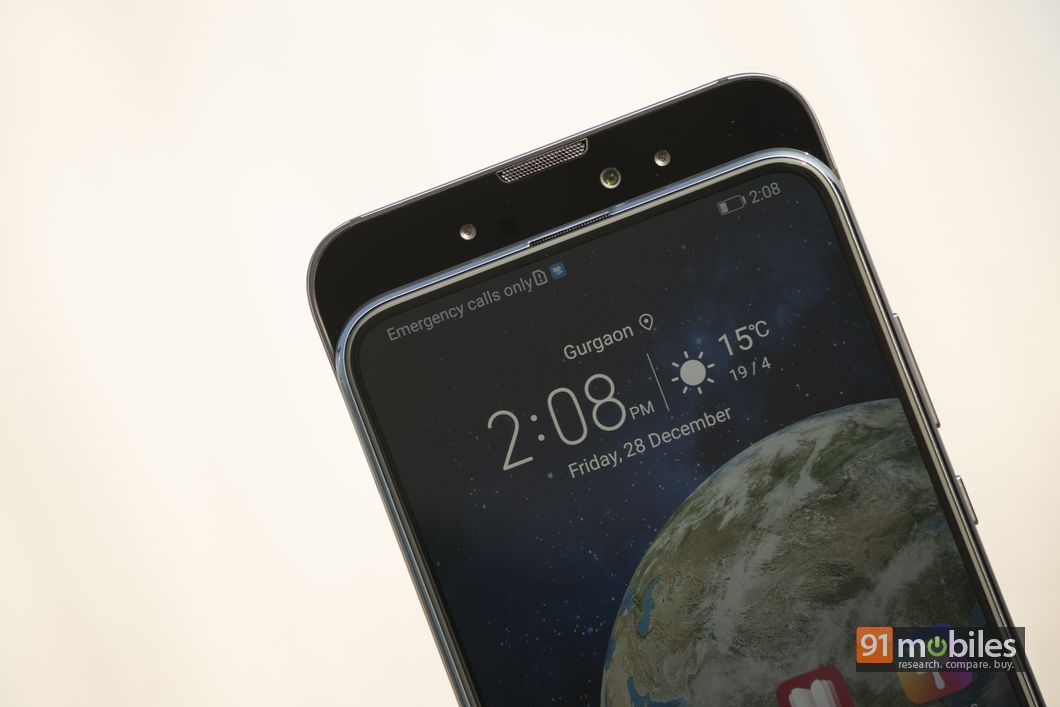 I enjoyed clicking selfies with the Honor Magic 2. Sure, the sensor all but butchers my natural complexion but weirdly enough, the handset didn’t soften my skin tone and I could easily make out the pores on my cheeks. Therefore, the Honor Magic 2’s selfie shooter dolled me up just enough for me to like the selfies and not delete them instantly. At night, the quality of the pictures does take a significant dip, however, you can use the built-in screen flash functionality to get a somewhat shareable picture.

The Honor Magic 2 utilises the Kirin 980 SoC, which also powered the Huawei’s latest flagship, the Mate 20 Pro. Up until the launch of the processor, I had a slight bias towards Qualcomm’s offerings, but I can confidently say that the Kirin 980 is no slouch in terms of performance. Be it playing graphics-intensive titles like PUBG and Shadow Gun: Legends, to multitasking between a dozen or so applications, the processor never slowed down to catch its breath. As for the memory, my review unit of the smartphone shipped with 8GB of RAM and 128GB of built-in, non-expandable storage. However, you can also pick up the device in a 6GB RAM option to save some bucks. Or, if you’re looking for more storage, then the brand also offers a 256-gig model of the device. 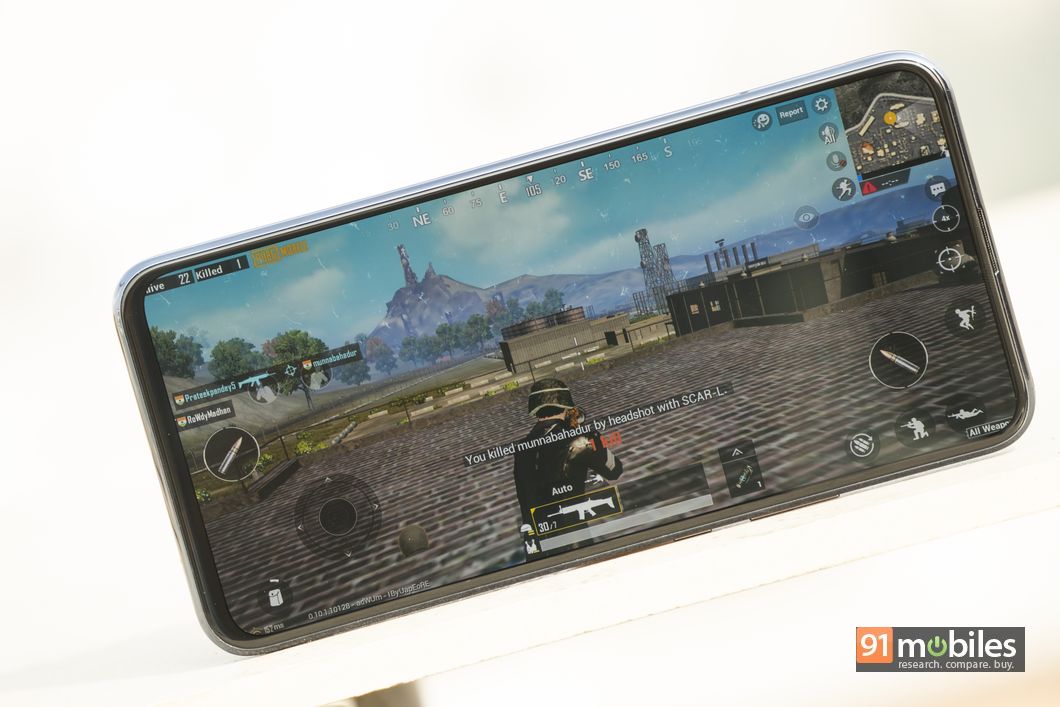 As for the battery life, the Honor Magic 2 ships with a 3,400mAh cell which comfortably lasted me a full day off a single charge. My usage is quite intensive, and I was consistently getting over four hours of screen on time with the device. What’s more, the Magic 2 also makes use of the crazy-fast 40W SuperCharge technology which debuted on the Mate 20 Pro. Consequently, you’ll be able to top up the smartphone’s battery in no time.

While the smartphone’s hardware holds up well, the software is a different story altogether. Now, as I mentioned at the beginning of my review, I am testing a Chinese variant of the device and therefore, the company could revamp the OS to meet the needs of Indian consumers should the Magic 2 launch in India. Regardless, I’ll jot down some issues I faced during my time with the device for anyone who’s looking to import a unit from China. Here we go – 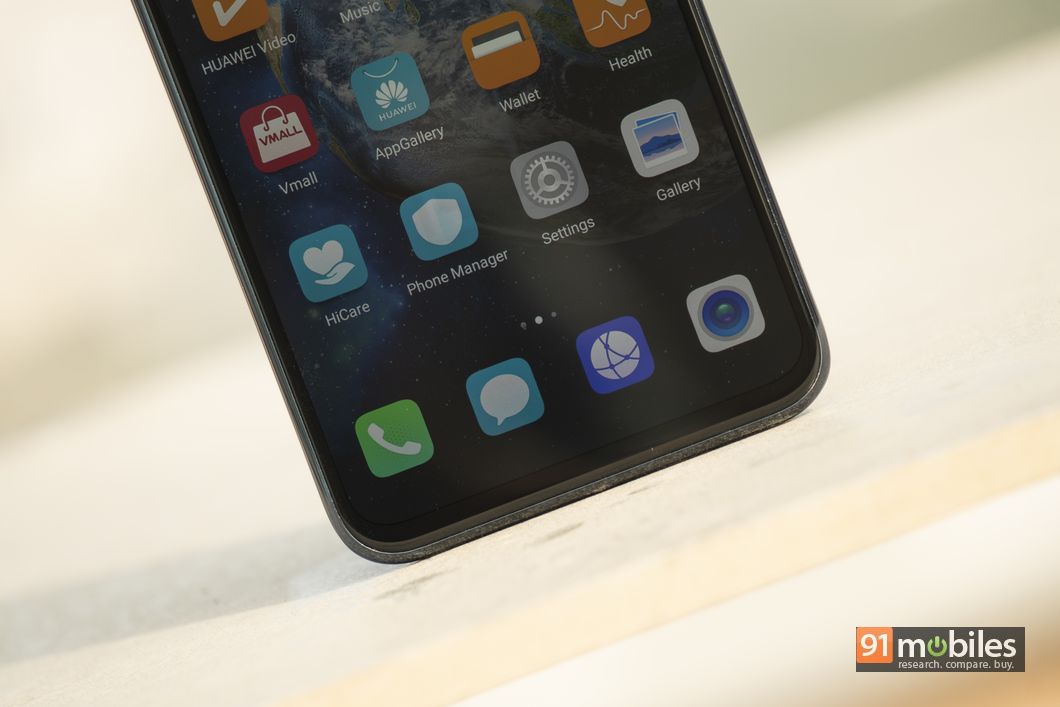 With that said, the skin comes with its fair share of useful features and tricks too. For starters, you can select multiple apps from your homescreen at once and club them together in a folder. Moreover, you’ll get a theme store with the smartphone, which will help you personalise your Magic 2 the way you deem fit. You can also slide the display down to toggle the selfie camera, which is a handy way to take some quick selfies. The skin also comes bundled with a ton of gestures, including my favourite ‘flip to mute’ action which mutes sounds and stops vibration from incoming calls, timers and most importantly, alarms – no wonder I’ve been coming to the office late.

Suffice it to say, the software onboard the Honor Magic 2 is a mixed bag. But, if you don’t fancy heavily-themed skins, then the Magic 2 won’t do much to change your outlook.

So, is the Honor Magic 2 a good smartphone? Absolutely. Is it worth your money? Well, not really. Before you bring out the pitchforks, hear me out. I enjoyed using the Magic 2 thoroughly and the smartphone’s hardware managed to surpass my expectations. 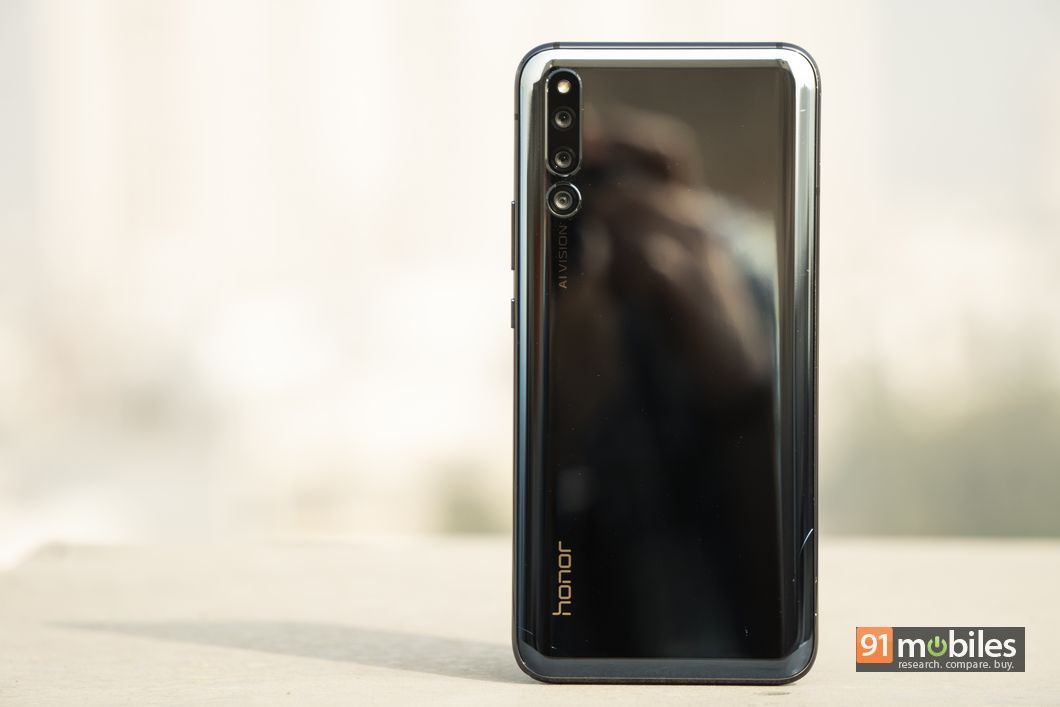 However, it’s the software I take issue with and unless Honor launches an Indian variant of the Magic 2, I don’t think you should pull the trigger and import one just yet. That being said, the Honor Magic 2 is quite possibly one of the most complete smartphones I reviewed this year and I’ll keep my fingers crossed for its arrival in India.