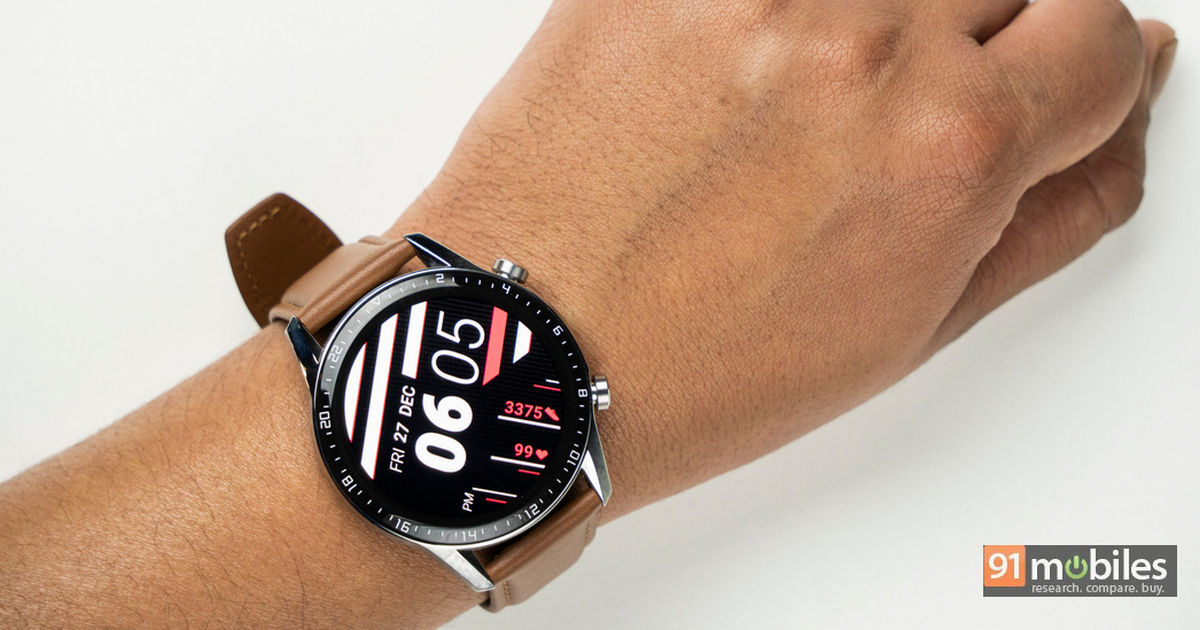 It has been a turbulent year for Huawei, but it would appear that the company is making progress in various segments of consumer electronics nonetheless. One of its fewer know incursions is in the smartwatch territory, which is currently dominated by Apple and Samsung. The Huawei Watch GT was introduced early this year in India and now the company is back to challenge the smartwatch heavyweights with the new Watch GT 2. Not being such a smartwatch enthusiast, this was a very refreshing experience for me and here are my thoughts on the device after a week with it. 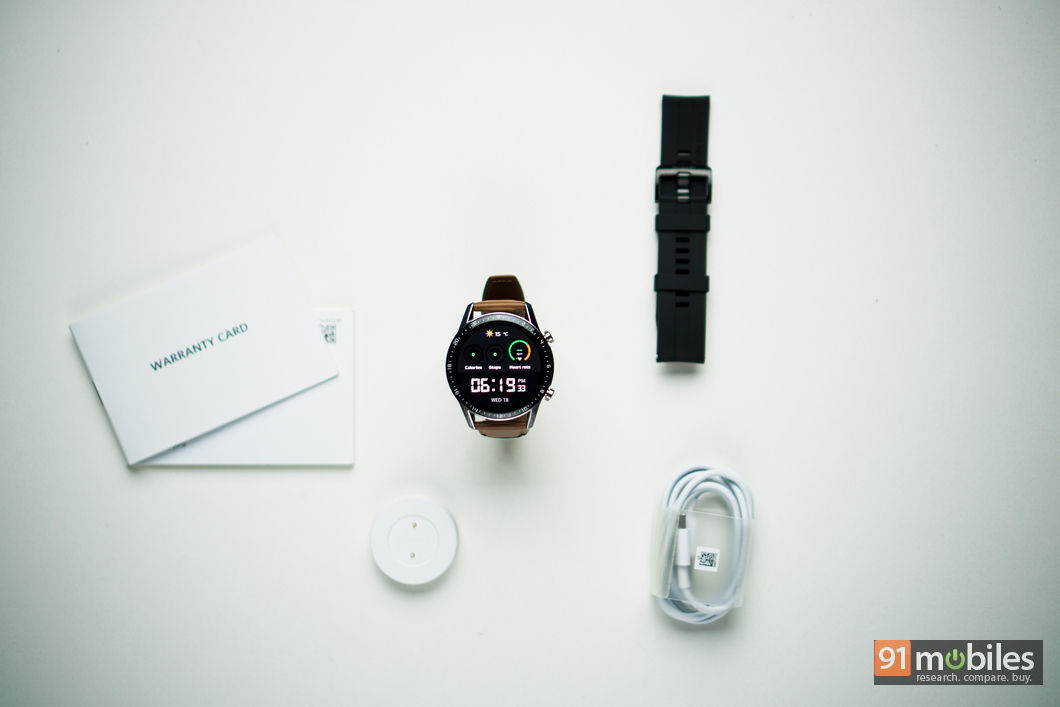 The variant which I had for review is the 46mm Sport edition and I have to say that Huawei has done a splendid job of making this device a real looker. The big circular AMOLED display usually got the attention of anyone I met with the first question being is this the new Galaxy Watch. On the face of it, the Huawei Watch GT 2 and the newly launched Samsung Galaxy Watch 4G (review) look similar, at least from a distance, except for the two circular knobs on the side of the GT 2 as compared to the small rectangular buttons on the Watch 4G. However, in terms of overall appeal, I have the give it to the Watch GT 2 for its curved 3D glass screen which merges into the casing giving an almost bezel-less look. 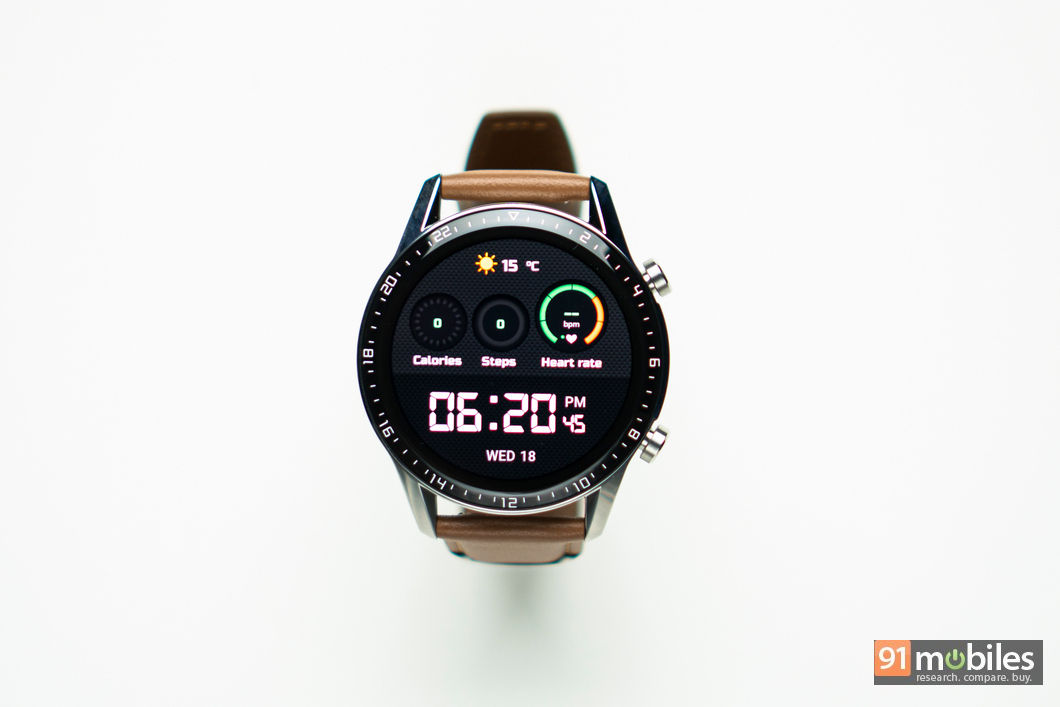 The Watch GT 2 weighs about 41 grams without the strap, which gives it a significant feel on my wrist but during long hours of wearing it, I barely noticed it. The screen measures 1.39-inches diagonally with a resolution of 454 x 454 pixels and also has a surprisingly bright display which can give you up 1000 nits. I had no problem reading the time and all the separate health-related data even in extremely bright areas. I do personally favour the dual functionality of a rotating bezel along with a touch screen response that I’ve seen on the Galaxy Watch but I can live with the GT 2’s UI. 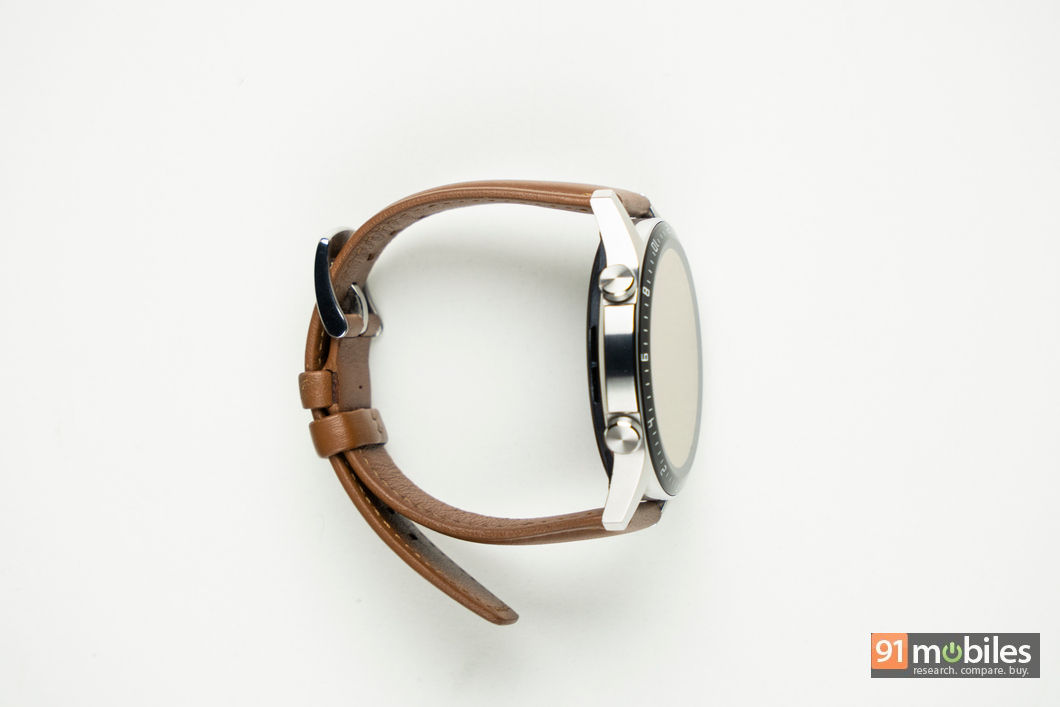 As far as straps go we see that the Huawei Watch GT 2 has a classic leather strap and normal leather strap of which the former is definitely the more appealing one. The GT 2 is also 5ATM rated, which means it can survive at depths of 50 meters underwater for up to 30 minutes.

The smartwatch is packed with features, out of which the maximum utility is for those who are into fitness and regular exercising. Huawei has provided a dedicated button to access all its fitness tracking features with a single click. The GT 2 can track different types of exercise modes such as indoor run, outdoor walk, indoor walk, outdoor cycle, pool swim, and more which provide the user data about the duration of the exercise, calories burnt, heart rate and more. Apart from that you also get the standard smartwatch sensors such as a gyroscope, accelerometer, optical heart rate, ambient light, and barometer. 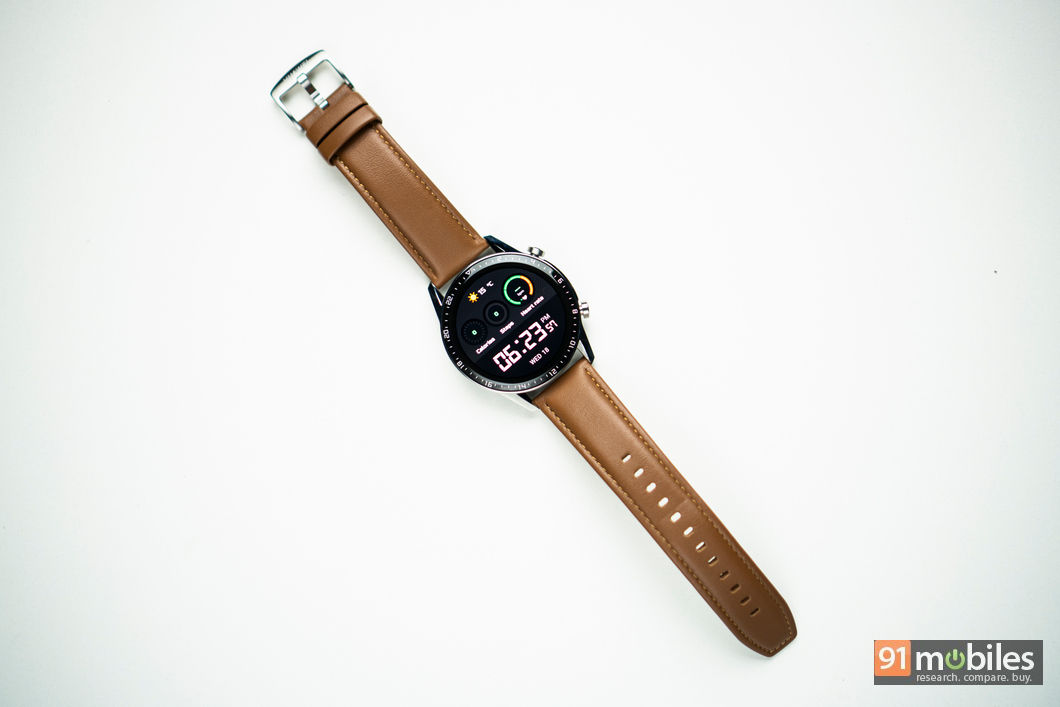 There is no NFC support in the GT 2 but you can pair it with your smartphone using Bluetooth, which worked flawlessly for me. Another thing that is missing is Wi-Fi and LTE. This means you need to continuously keep your phone paired with the watch to get updates such as the weather outside, or your messages and calls. 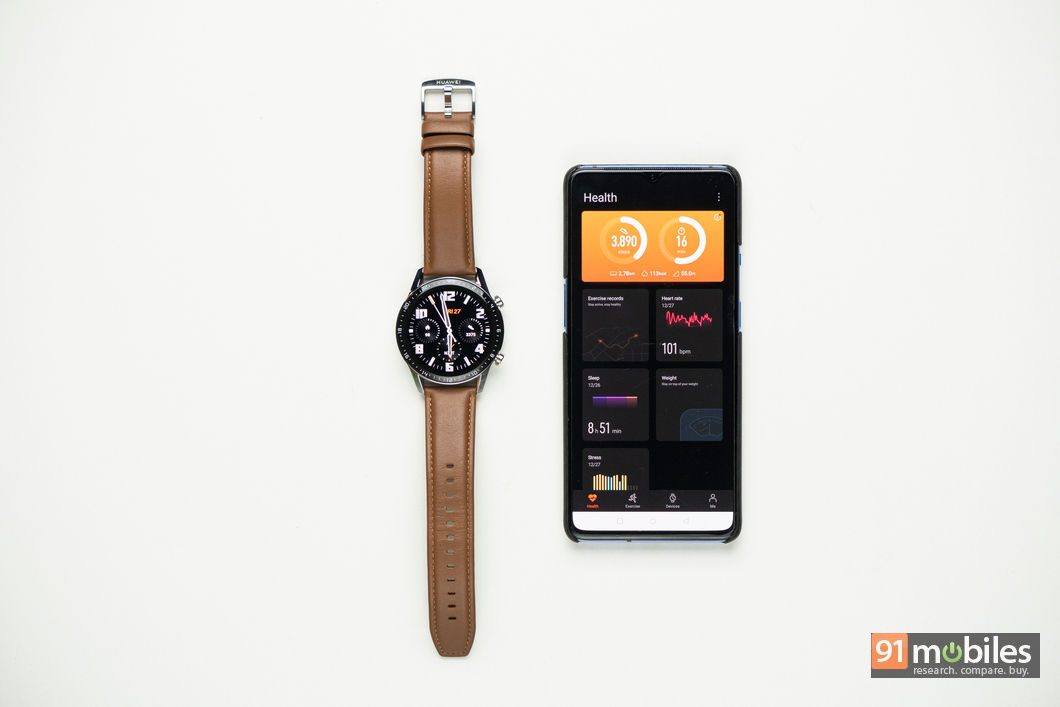 Software-wise, the Watch GT 2 is powered by Huawei’s own Lite OS, which is good enough for normal usage. However, the Apple Watch Series 5 (review) and even the Samsung Galaxy Watch 4G have a kind of fluidity over the whole navigating experience, while the Lite OS feels slightly sluggish in comparison. There are several apps already installed in the Huawei Watch GT 2 for your day-to-day tasks such as weather, workout, stress, music, compass and more. However, the smartwatch lacks a dedicated app store, the likes of which can be found on the Galaxy Watch 4G. The latter has apps for Uber, Spotify, Here Maps, along many others along with the support for Bixby, while there are no third-party apps and no voice assistant support for the Watch GT 2. This means that there are no significant customisation options for the Watch GT 2 except for the usual changing of the watch face and cycling between the pre-installed apps. Huawei’s TruSleep, which monitors your daily sleeping pattern, is what I believe is a really informative aspect of the Watch GT 2. It tells you about your sleeping patterns wherein you get details on which hours of the night you were in deep sleep, REM (rapid eye movement) sleep and night sleep. Based on this a score is given to show how good your sleeping habits are. 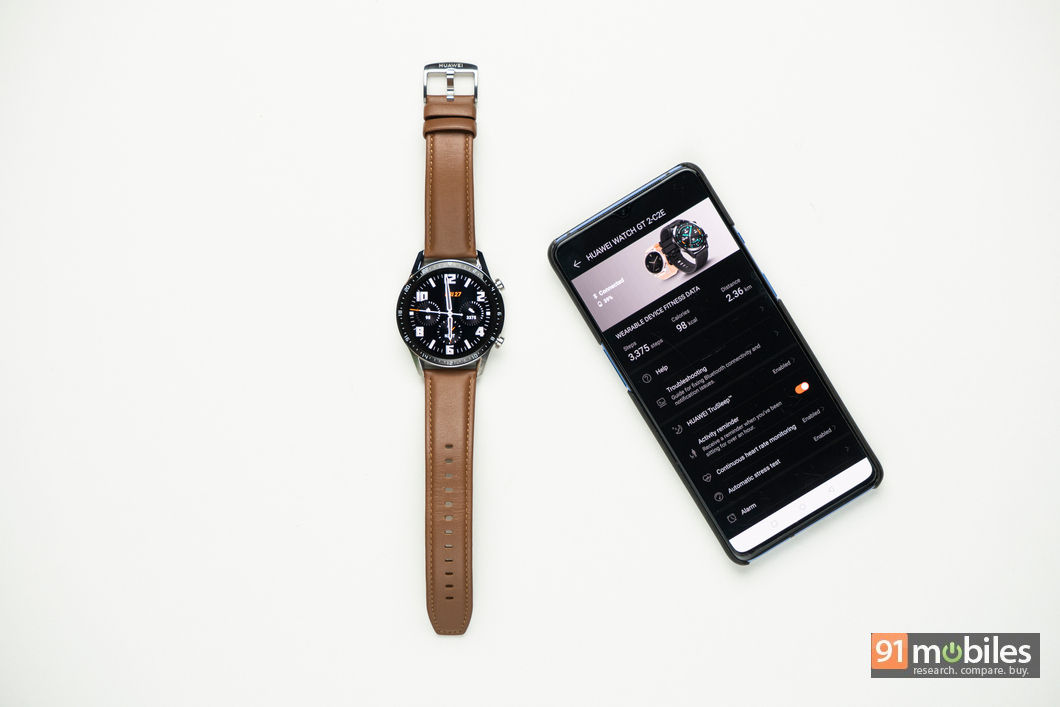 When connected to your smartphone, the Watch GT 2 will be able to display messages from various social media apps such as WhatsApp, Facebook, Instagram and more. While you can receive messages on the GT 2, there is no functionality of replying to them. 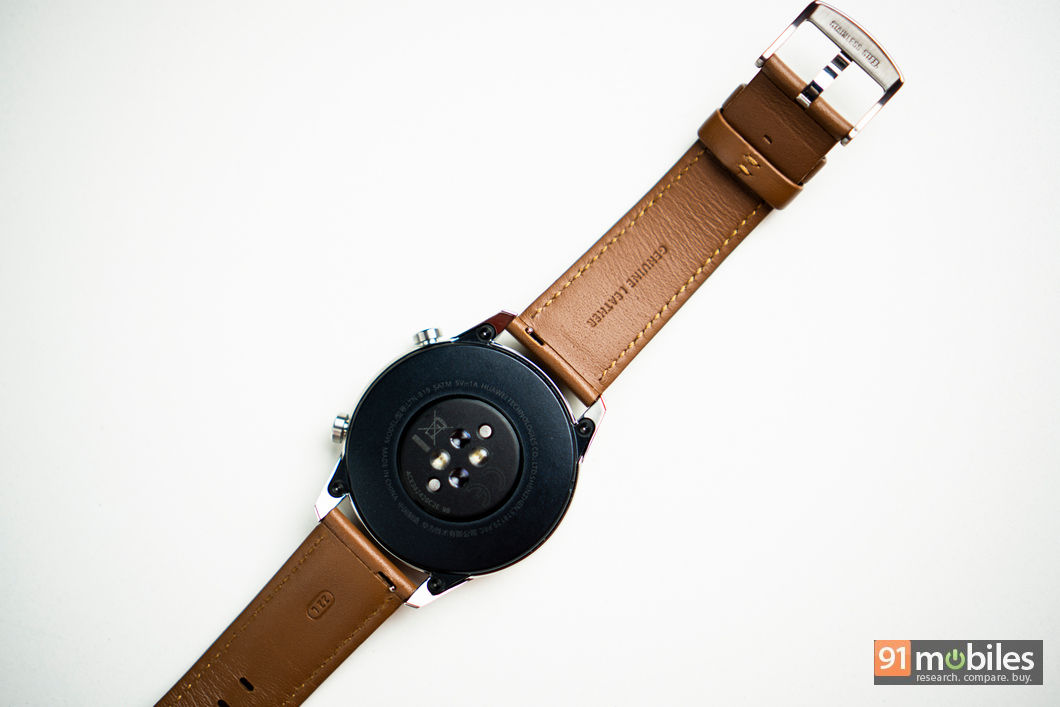 If you don’t have a Huawei phone, you will have to download the Health app by Huawei on your handset. However, it is not as comprehensive as the Samsung Galaxy Wearable app. That is not to say that the Health app is not up to the mark. There are several things that you can monitor directly from the app such as your heart rate, sleep pattern, and stress. Apart from that you also get all your exercise records in one place as well along with running plans for those who wish to part in long runs or marathons. Then there is also the section for the devices connected to the app wherein you can do some further customisations on your watch such as changing the temperature measurements from Fahrenheit to Celsius, enable Huawei’s TruSleep feature, change the music settings and more.

The Huawei Watch GT 2 can hold its own in the performance department. There is about 4 GB of storage out which 2 GB is utilised for the RAM and the rest can be used to store music or favourite contacts and more. The in-house Kirin A1 powers the smartwatch and even though it packs in a 455 mAh battery, you will struggle to deplete the watch’s battery in less than a week. This, I think, is perhaps the Watch GT 2’s USP. I barely have to charge the device at all and it functions like how a basic smartwatch should function. However, the Watch GT 2 does not come with an always-on-display. 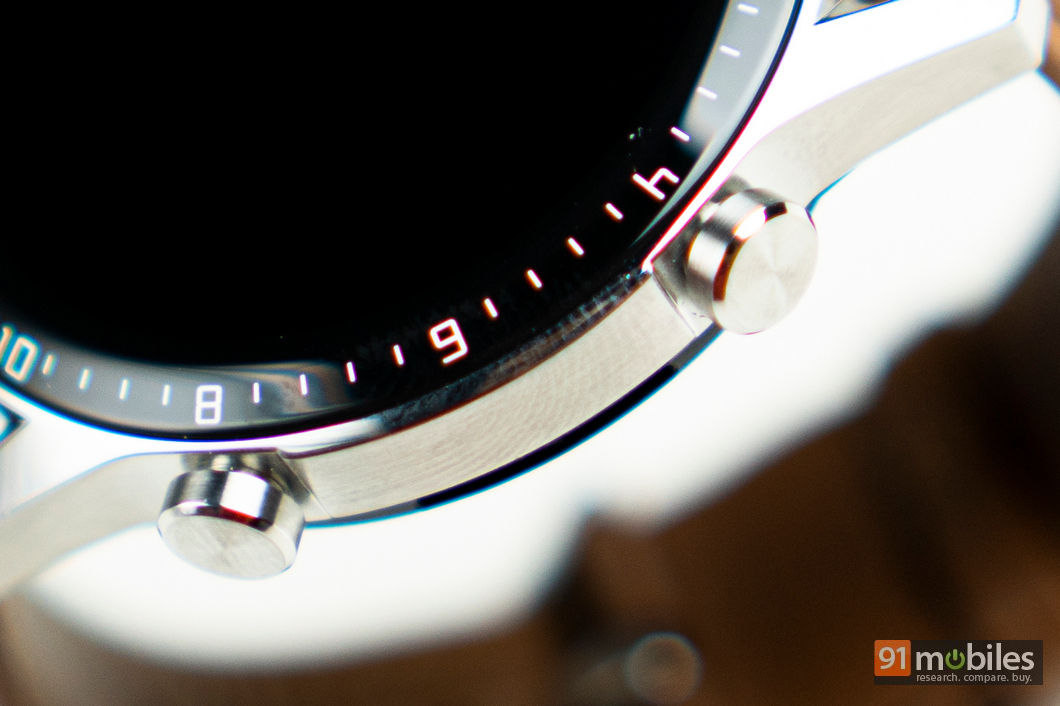 You can get notifications from apps that you want and also receive calls. You can answer calls using the in-built speaker and mic in the GT 2 but it would be recommended that you use your phone for handling calls, as the speaker on the GT 2 is quite small and tinny. If music is playing on your phone, then you can use the GT 2 to play or pause the music and increase or decrease the volume. 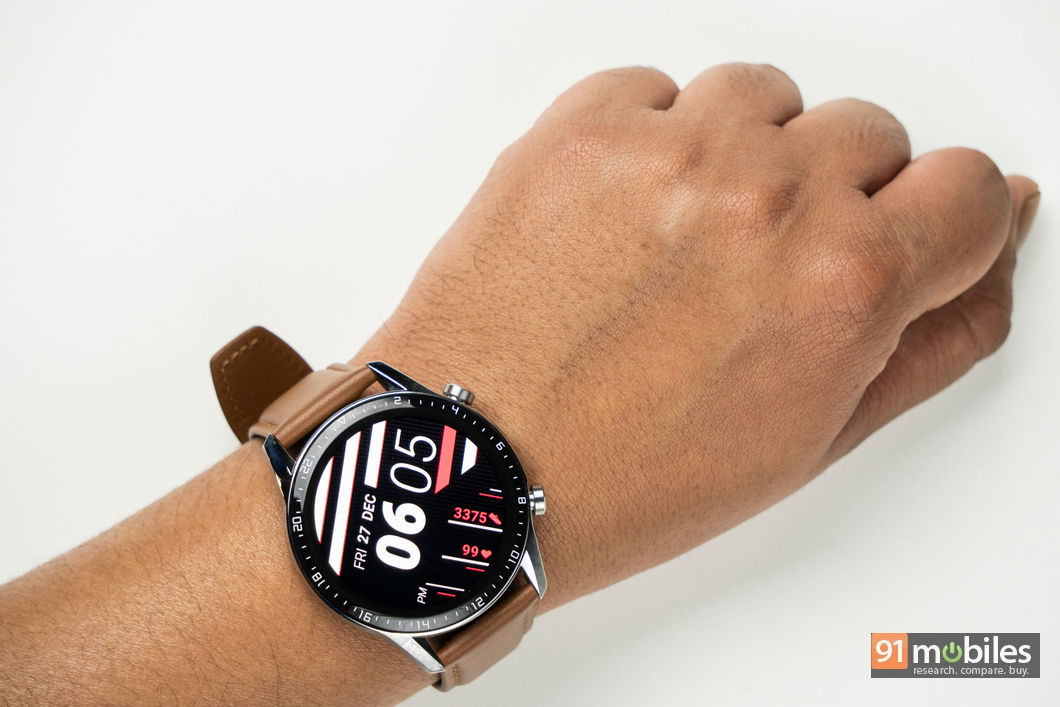 In terms of overall feel and usage, as I’ve mentioned before, the Watch GT 2 is not as fluid. I compared the swiping speeds of the GT 2 with the Galaxy Watch and noticed that the latter was significantly more buttery and lag-free than the GT 2. However, the Huawei smartwatch is definitely more comfortable to wear than the Galaxy Watch 4G, as the latter’s bulky size makes it almost impossible to wear to bed.

The Huawei Watch GT 2 is a wholesome package for those whose main motive is to use it exclusively for fitness-related purposes. The lack of Wi-Fi or cellular connectivity means that the watch will always have to be paired to the phone, thereby removing the usage of the smartwatch as a sort of replacement for your phone. Lack of support for third-party apps only compounds the problem. Apart from the stylish looks, the only thing that is really going for the Watch GT 2 is its stellar battery life and the fact that it is not a cumbersome device in that you can easily wear it on your wrist and hit the bed. Priced starting Rs 17,990, the Watch GT 2 is competitively priced and is significantly cheaper than the Galaxy Watch 4G. However, I believe that the wide amount of extra features packed in the Galaxy Watch 4G along with, and I cannot stress this enough, support for third-party apps makes it worth the extra money. If not you can always get the extremely capable and long-lasting Amazfit GTR (review) which is priced starting just Rs 10,000 and can deliver on almost all the aspects of the Watch GT 2.

For fitness freaks I can straightaway recommend the Watch GT 2 as a reliable companion at a cheaper price. Owning a Huawei phone is a bonus due to the seamless integration between the phone and the watch. For everyone else, FitBit, Samsung and even Amazfit are offering compelling devices that are worth the extra money.