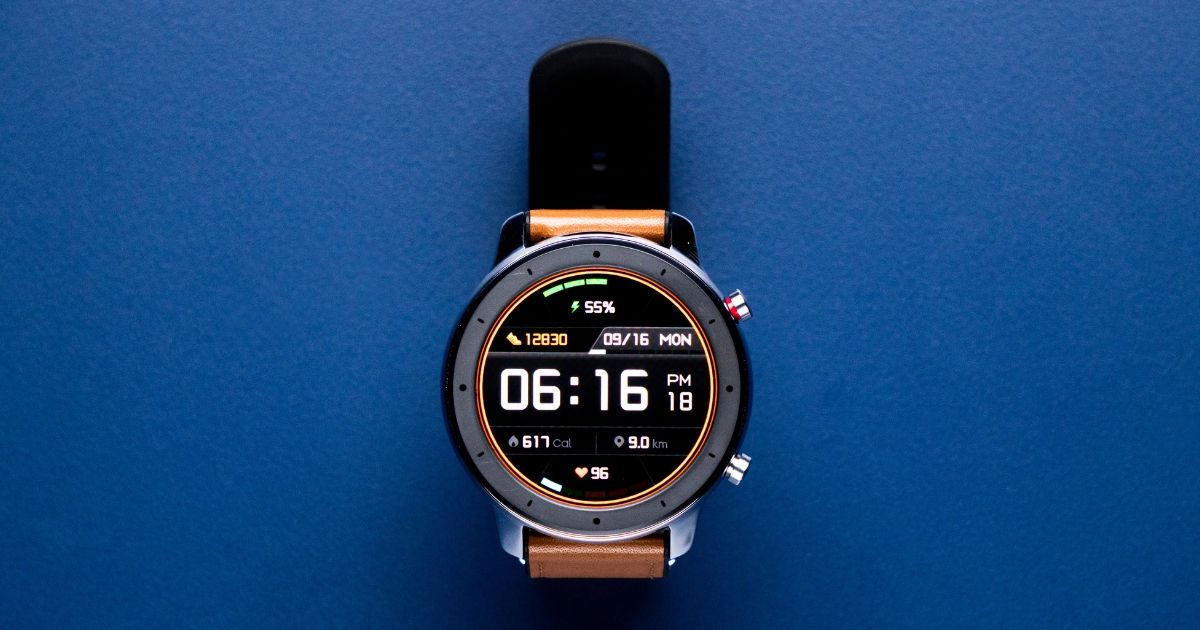 Till some time ago, it seemed the smartwatch segment would be a two-pronged battle between Apple and Samsung, with Fitbit trying to play catch up. However, China’s Huami – which offers wearables under the Amazfit brand – is emerging as an unlikely contender. Thanks to some impressive new wearables it launched back to back, it’s evident that the brand is fully prepped to make the vision a reality. Amidst these efforts comes the Amazfit GTR, which seems to be the brand’s most audacious effort – as evident from its racing cars-inspired name itself. While the smartwatch offers a slew of features, Amazfit has managed to price it quite attractively at Rs 10,999. So does that means it’s an eyes-closed buy or are there some caveats? Well, I’ve been using the device for a couple of weeks and here’s how my experience went. 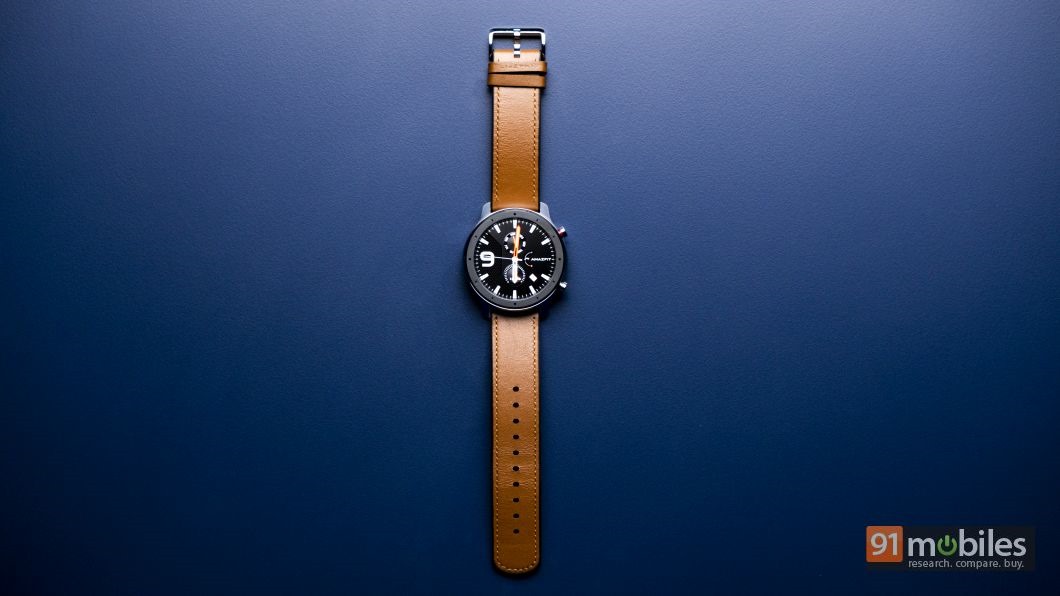 I simply loved wearing the Amazfit GTR on my wrist, thanks to its classic watch design. That means that it complements both formal and casual attire well with its leather strap adding to the charm. That doesn’t mean that the GTR is compact in any manner. It has a large circular dial of 47mm, and if you’ve small wrists then you might find it rather large. Thankfully though, the company does offer it in a smaller size of 42.6mm. 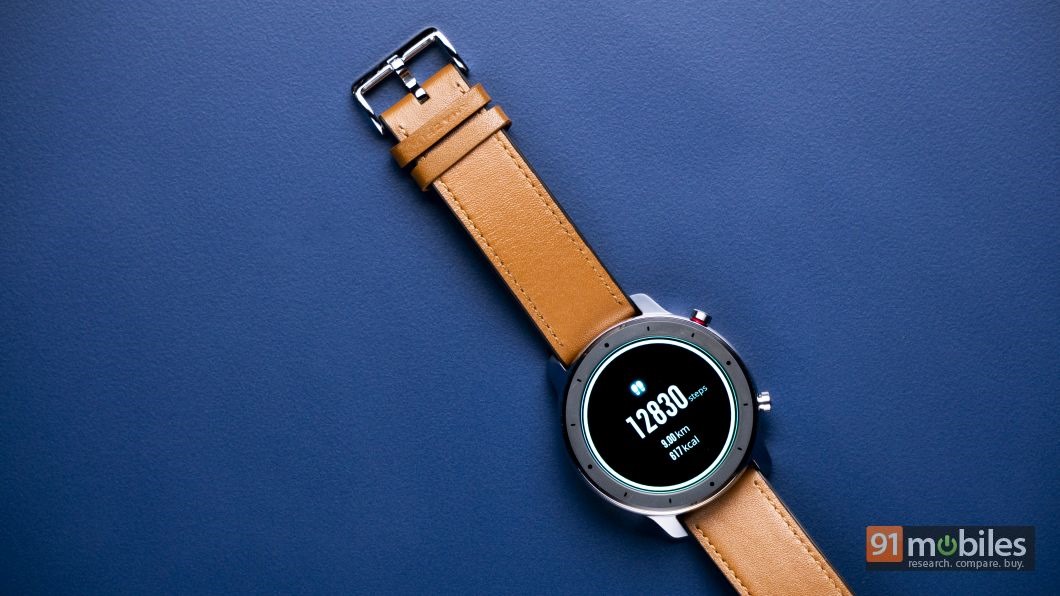 The good thing is that GTR’s weight has been kept in check, and it doesn’t seem to be too heavy and can easily be worn for long hours. Speaking of that, the band doesn’t cause any irritation even when the wrists are sweaty. I was able to wear it during my hour-long workout sessions without any issues. Of course, you could choose to simply swap out the strap. Another inspiration from regular watches is the clasp mechanism, which makes it easy to adjust the fit of Amazfit’s device. It’s worth noting that the device comes in a slew of options – aluminium or stainless steel frame with leather bands, and titanium frame with Fluororubber strap. 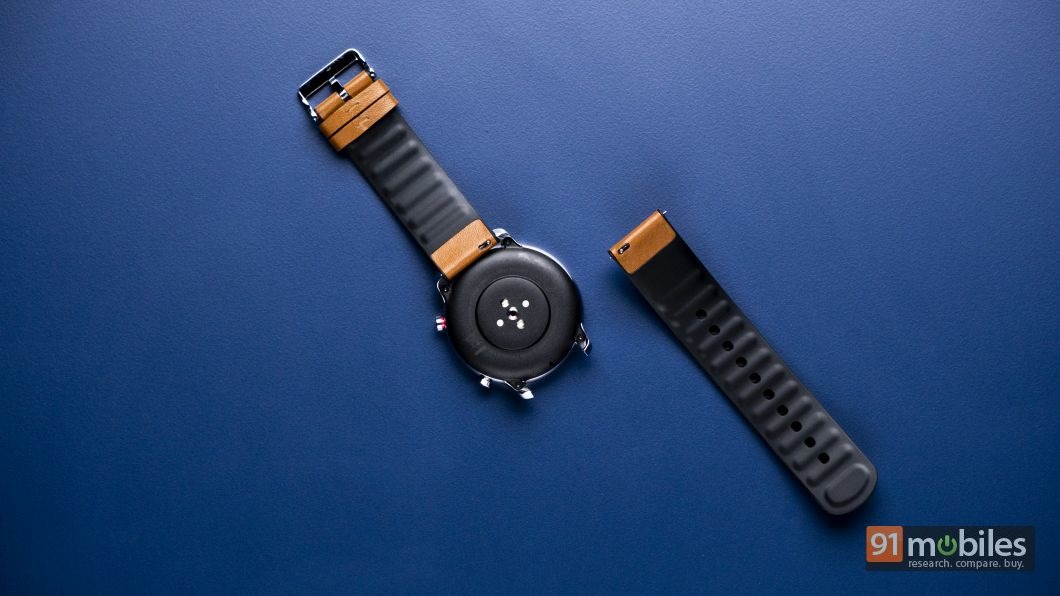 The frame of the Amazfit GTR is solid, and can handle minor bumps with ease. While it might be subjective, I don’t necessarily like the black bar running around the edges as it makes the display less immersive. As far as design elements are concerned, you’ll find two buttons on the right side. The one with the red hue around is the power button and lets you go to the homescreen as well, while the other is for accessing status quickly. You could also choose to change the purpose of ‘Quick start-up’ key, as it’s referred to, by choosing from workout, heart-rate monitor, control music playback, notifications and more. 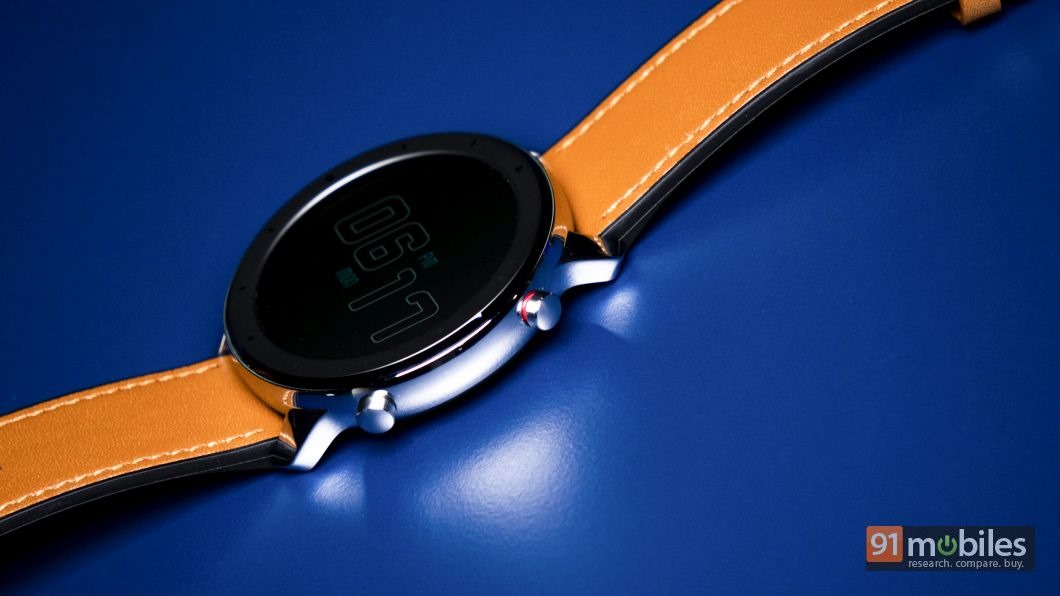 The round display on the GTR measures 1.39-inches and bears a resolution of 454 x 454 pixels. The AMOLED panel has good viewing angles and brightness levels as I didn’t need to squint my eyes to read the screen outdoors. That said, I didn’t find the automatic brightness to be accurate and resorted to setting it manually. The touchscreen on the other hand, is responsive and works quite well with gestures or other actions. 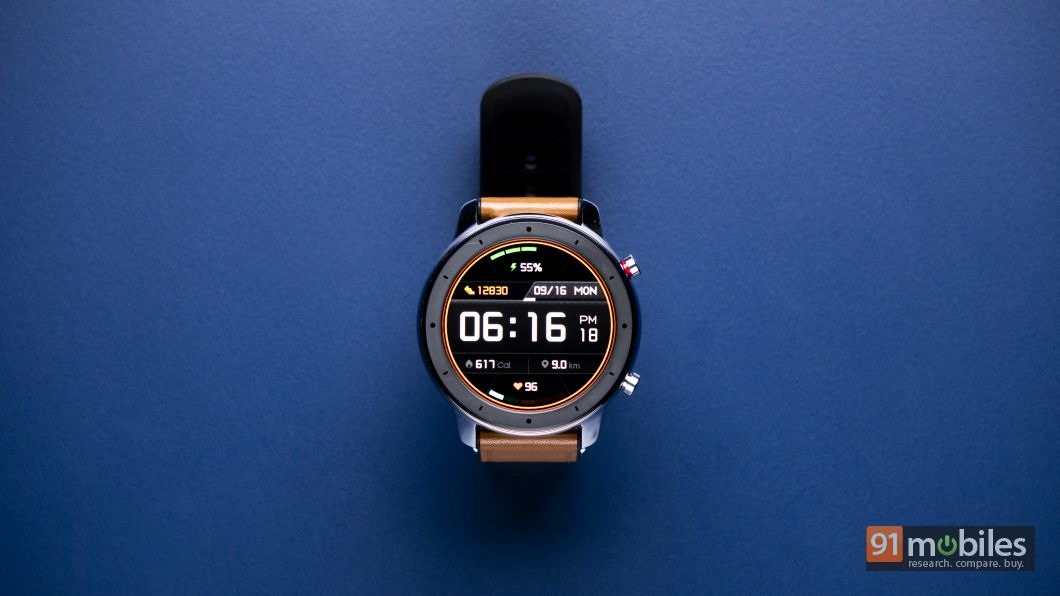 The underside of the Amazfit GTR is also quite minimal. Here you’ll find the proprietary charging pins along with the heart rate sensor. For durability, the display on the watch is protected by a layer of Corning Gorilla Glass 3 along with an anti-smudge coating, which is important as you will be interacting with the watch using the touchscreen. The wearable water-resistant up to 5ATM.

The Amazfit GTR is as loaded as a smartwatch can be, and in most cases, you don’t even need to keep it tethered to a phone to harness those abilities. That’s because it comes with standalone GPS, and has the usual tracking features such as pedometer, calorie counter, etc. 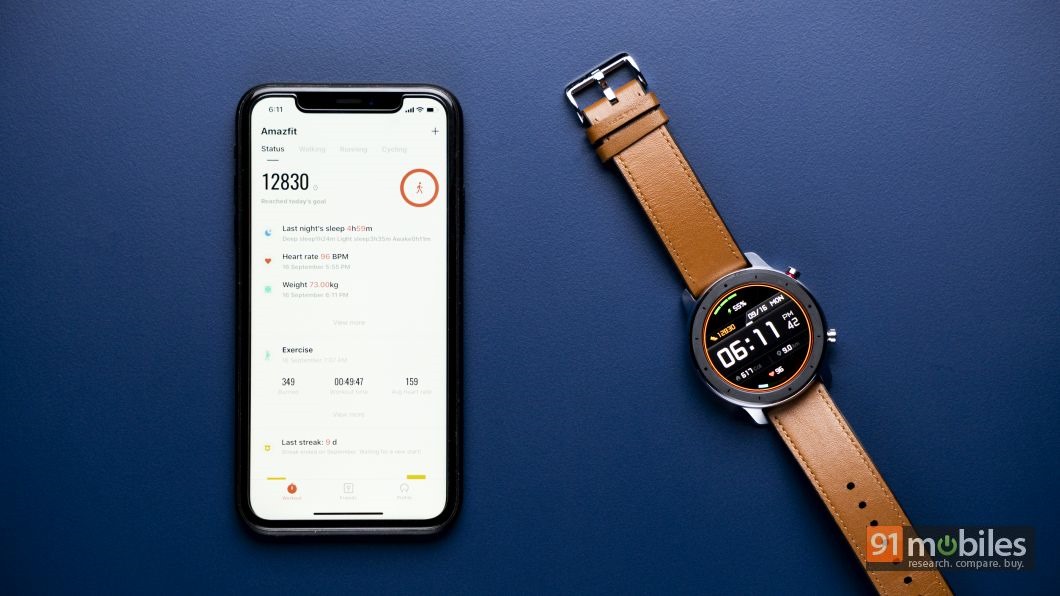 Like with all wearables of its class, you could change the watchface of the GTR with the Amazfit app. Talking of that, you could connect the device via Bluetooth with your Android or iOS smartphone. I paired it with my iPhone XR (review) and iPhone 11 (first impressions), and the app worked flawlessly. Setting up was fairly easy, and it automatically syncs up the data too. I also liked the fact that you don’t need to connect manually every time the Amazfit GTR went outside of the vicinity of the handset. That said, the range isn’t too great as the device loses connectivity as soon as you go to a different room, for instance.

As mentioned above, the watch is self-sufficient and offers all the options directly. Swiping down brings the status and quick settings panel, indicating the battery level, along with letting you change brightness, illuminate the screen, enable the DND mode, switch on the battery saver mode, or lock the device. Swiping left brings up the activity screen showing steps, while another swipe allows you to measure the heart-rate. The same functions are available in reverse if you swipe right. 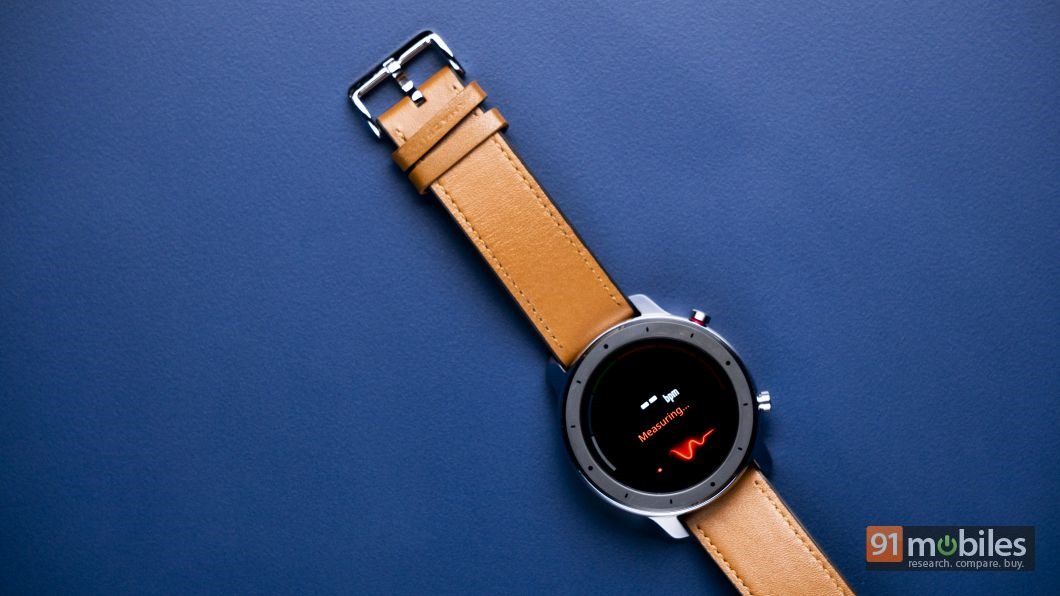 Swiping up on the GTR’s screen brings up the menu showing your activity status (available by pressing the bottom-right key too), measure heart rate, choose from 12 workouts like outdoor running, cycling, treadmill, swimming, skiing and exercise. Then there’s Activities that summarises your daily activities (if you’ve chosen any workout) and shows calorie burned and the total time of the workout. There’s no automatic workout detection though. If you’re playing a song on a paired device then you control its playback with the Music option. The notifications option is quite useful as it shows you your notification history. Then there’s the ability to set up alarms, event reminders, etc use other features such as compass, timer, countdown and find mobile via the ‘More’ section. Lastly, the settings menu offers the ability to change screen-on duration, toggle always-on display, and check system info. 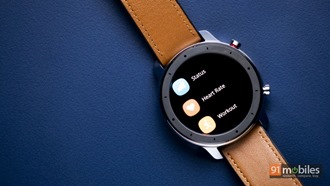 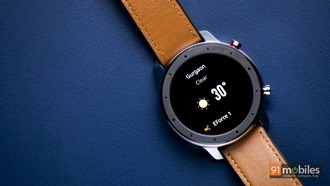 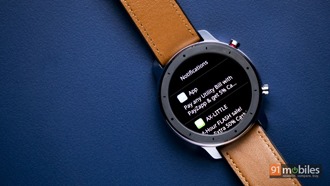 The always-on display feature deserves a special mention as it’s quite useful, and the Amazfit GTR got it as an OTA update during the course of the review. Sadly, it’s still in beta as the smartwatch froze on me not once, but twice. I had to wait a couple of hours for the device to shut down (mind you, the battery was above 80 percent battery level both times). Hopefully, it’s a bug and can be resolved with an update.

In terms of the app, it’s quite user-friendly and offers a ton of options to tweak the watch’s features as per your liking. You could customise what all you want to see on the GTR, change its watch face, set reminders, and much more.

Of course, all these features mean nothing if the device isn’t capable in terms of activity tracking. well, that’s not the case as the step counter is pretty accurate and so is the sleep tracking feature. After about an hour’s worth of workout, calories burned were usually ~250kcal. Sadly, I can’t say the same for the heart-rate monitor. It usually showed my heart rate in the range of 120 to 130, which is quite high and as pointed out by my colleague in the Amazfit Bip Lite review, the Amazfit GTR measures heart rate of inanimate objects too. 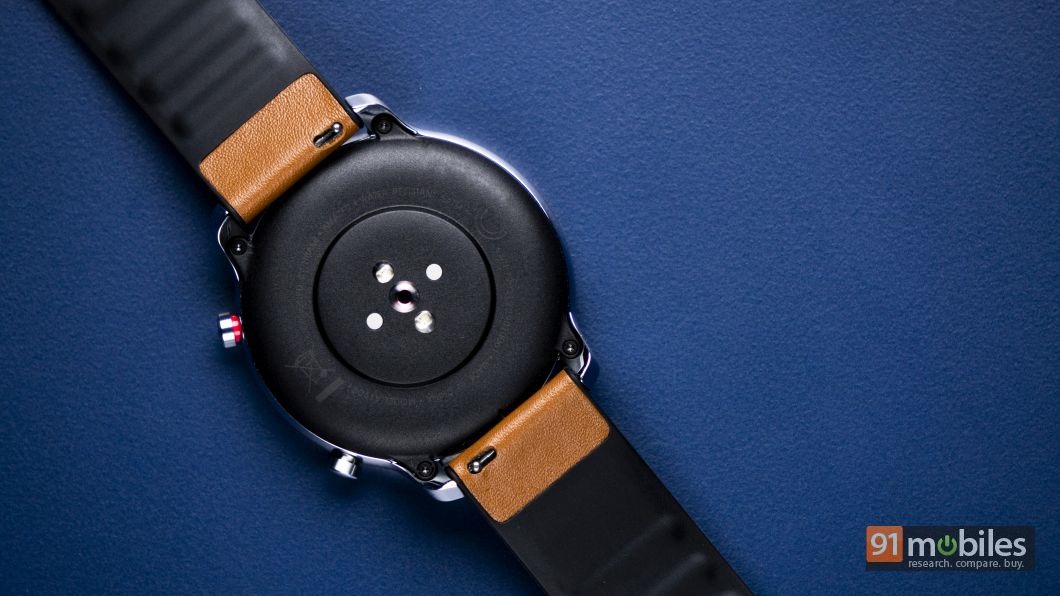 With regards to the smart functionality, I really liked the fact that the device is able to show you your notification history. However, the list of apps supported for notifications is limited and includes just social apps like Facebook, Instagram, Twitter, and Telegram. You could choose to get notifications from all apps by checking the others option, though in such cases the notification on the GTR appears as ‘App’. This means that I had to figure out the context of the notification and then decipher which app sent it. A simple example of this would be booking an Uber. Additionally, the smartwatch can’t show Hindi text and you’ll get ‘???’ as notifications in such cases. You do get notifications for calls too, though you can’t accept them up from the wearable itself as it misses out on a microphone. I also found the vibration to be quite powerful and would have liked the ability to adjust its sensitivity.

This is the major draw of the GTR, and perhaps one of the biggest reasons I haven’t got bored of it. Unlike other wearables that require juicing up every other day or can’t last more than three to four days, the latest from Amazfit promises to offer a backup of 24 days (up to 74 days if you use it like a normal watch). While that might be a stretch, I didn’t need to fuel the device more than a couple of times during my usage, which is a testament to its amazing backup (and this also included the occasions when I had to put it on charge as it froze). To put it in numbers, when the smartwatch wasn’t connected to the phone, it drained just 10 percent in a period of 12 days. And when connected to the phone, the drain was ~30 percent during the same period. Though I had kept the always-on display off and heart-rate monitor wasn’t working all the time. 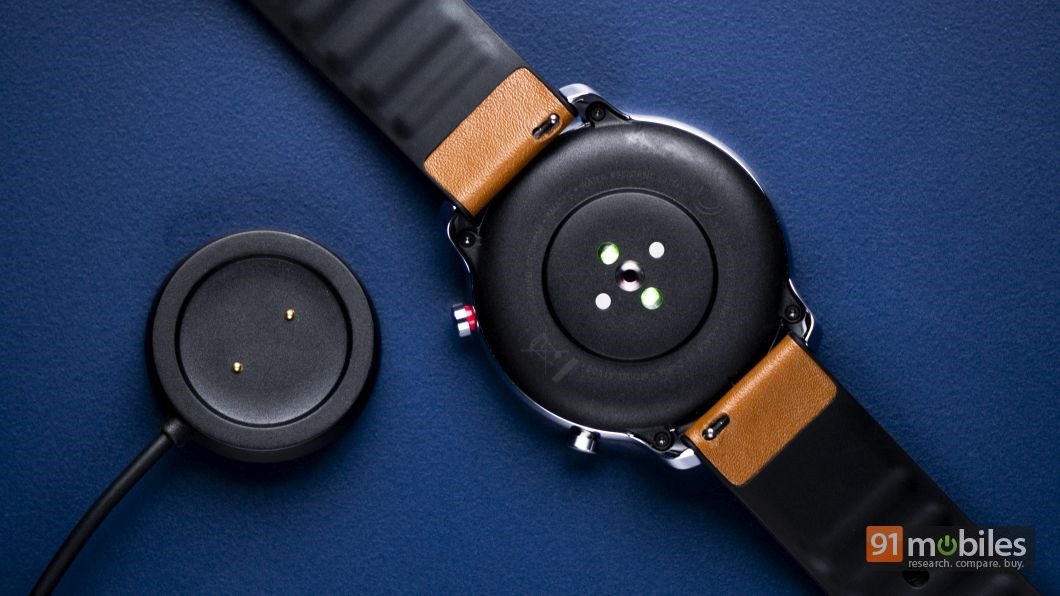 My only grouse in this aspect would be the use of the proprietary charger. That said, it manages to fuel the 410mAh battery in about an hour and a half with a 1A adapter.

The Amazfit GTR is a solid smartwatch that aims to deliver on all fronts. From its practical design to great display, and from a slew of fitness-tracking features to smart capabilities – all backed by a battery life that’s simply outstanding – the device ticks all the right boxes. While I’d have liked support for more apps and better notification management, those aren’t a big deal if you are looking for a watch that accompanies you night and day, during workouts and board meetings with equal ease. Add to it the asking price of Rs 10,999 (Rs 9,999 for the 42.6mm version), and the Amazfit GTR becomes an even more enticing proposition. It simply is miles ahead of other smartwatches in its price bracket. In fact, I’d say that the device can give even pricier options like Samsung Galaxy Watch Active (review) and Fitbit Versa (review) a run for their money.