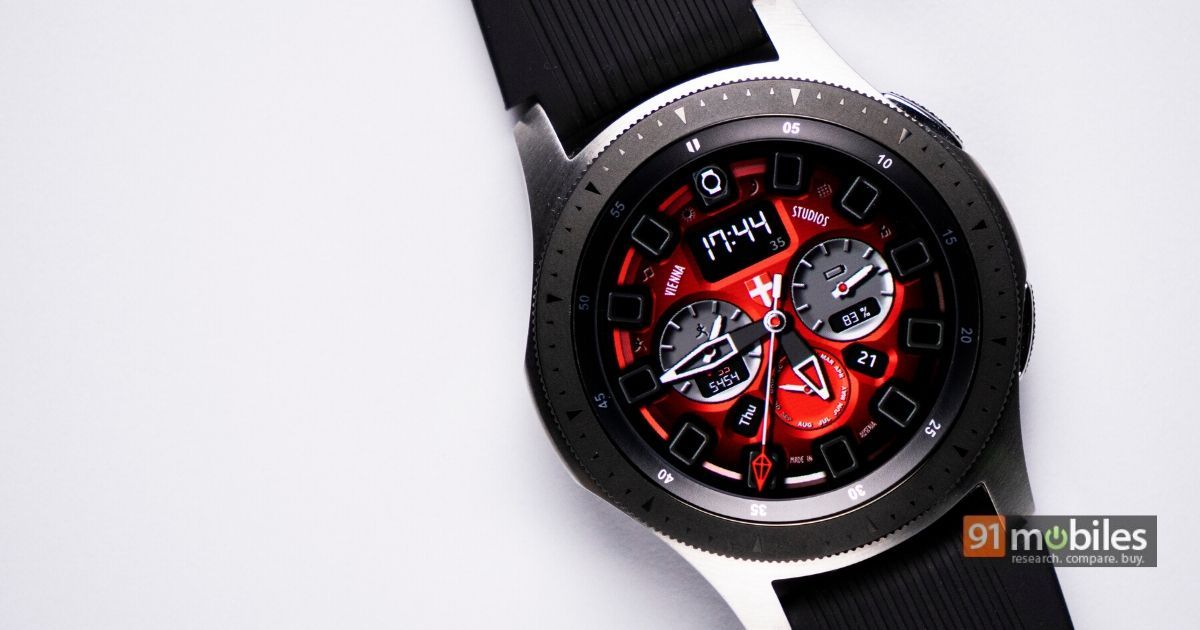 “The Galaxy Watch 4G is one of the best options if you’re looking for a premium, fully-loaded smartwatch”

Samsung has been playing its A-game right from the get go when it comes to the wearable segment in India, and is one of the first brands that introduced smartwatches in the country. Now, with the segment booming, it has upped the ante with a couple of new premium wearables that look pretty loaded, at least on paper. The Galaxy Watch 4G has been adorning my left wrist for a while now, and it’s time to give you the full lowdown. 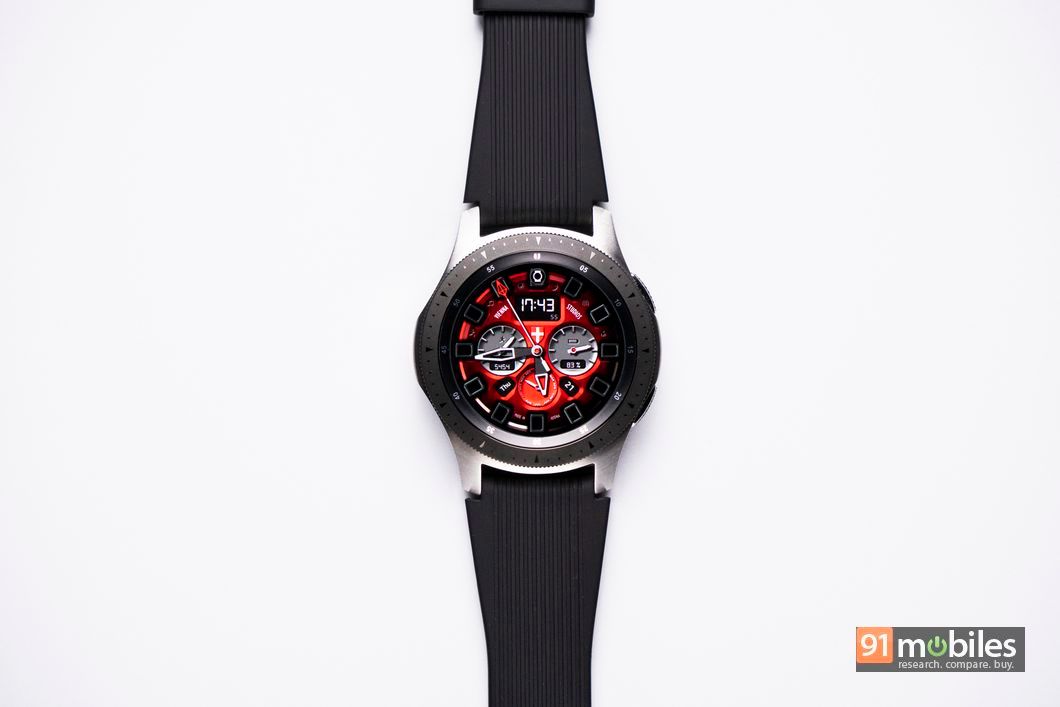 The Galaxy Watch 4G is available in two case sizes – 46mm and 42mm, and my review unit is the former. The device is rather large, and is for you if you prefer chunky watches. It sticks to a conventional watch design, and I have to admit I fell in love with it the moment I laid my eyes on it. The circular, 360 x 360 Super AMOLED display comes layered with Corning Gorilla Glass and is a visual treat, just like most screens from Samsung. The screen is recessed and is surrounded by a rotating bezel that can be used to move around and navigate the watch interface, just like the one we’ve seen earlier on the likes of the Samsung Gear S3.

The chunky silver case comes paired with a 22mm wide black silicon strap that makes wearing the Galaxy Watch comfortable over long periods, but do note that the 63g device could weigh your wrist down. In fact, while it does feature sleep tracking, I couldn’t really bear the idea of wearing it to bed – I do value my sleep you know. The strap features quick release pins and can easily be swapped out with a regular third-party one if you want. On the right side of the case, you’ll find two buttons, one to go back and the other one to jump to the home screen. The heart rate sensor is located on the back, as usual.

The Galaxy Watch is so loaded with features that it’d be tough to list them down. In a nutshell, the device is a full-fledged smartwatch and a fitness tracker, and thanks to its built in eSIM, can even work standalone for calls and messages. Apart from the eSIM, you get built in GPS, Wi-Fi, Bluetooth, an altimeter, and a barometer, and the watch is water resistant up to 5 ATM (50 meters). Apart from your steps, heart rate and sleep, it can monitor over 39 different physical activities, tracking six popular exercises automatically.

The device is based on Samsung’s homegrown Tizen platform, and works with both iOS and Android phones with the help of companion apps. You’re going to need the Galaxy Wearable app (along with a bunch of related plugins) to control the device, plus the Samsung Health app for syncing and tracking fitness data. Using the Galaxy Wearable app, you can control the app notifications that appear on your watch, adjust sound and display settings, manage installed apps and watch faces, add music and images to the device’s storage, and manage the mobile network for the eSIM. While the pre-installed apps include all the essentials like weather, alarm, calendar, reminder, etc, and Samsung’s smart assistant Bixby, there are quite a few available to install, including a bunch from Samsung itself, plus loads more third-party ones. The latter includes apps like Uber, Spotify, Here Maps, along many others.

In fact, music can be streamed directly via Spotify over 4G, and if you have a premium account, you can even download tracks on to the watch. Here maps can work in a similar fashion, as maps can be downloaded to the watch. As far I’m concerned, I had lots of fun trying out different watch faces. While the built in ones are great, there are numerous third-party ones available to download – both free as well as paid ones. And I must admit, there are many that caught my eye, such as this amazing looking one called “SolidCeramic” from Vienna Studios. This in fact, is a paid watch face, but I was able to snag it for free during a limited-period sale. 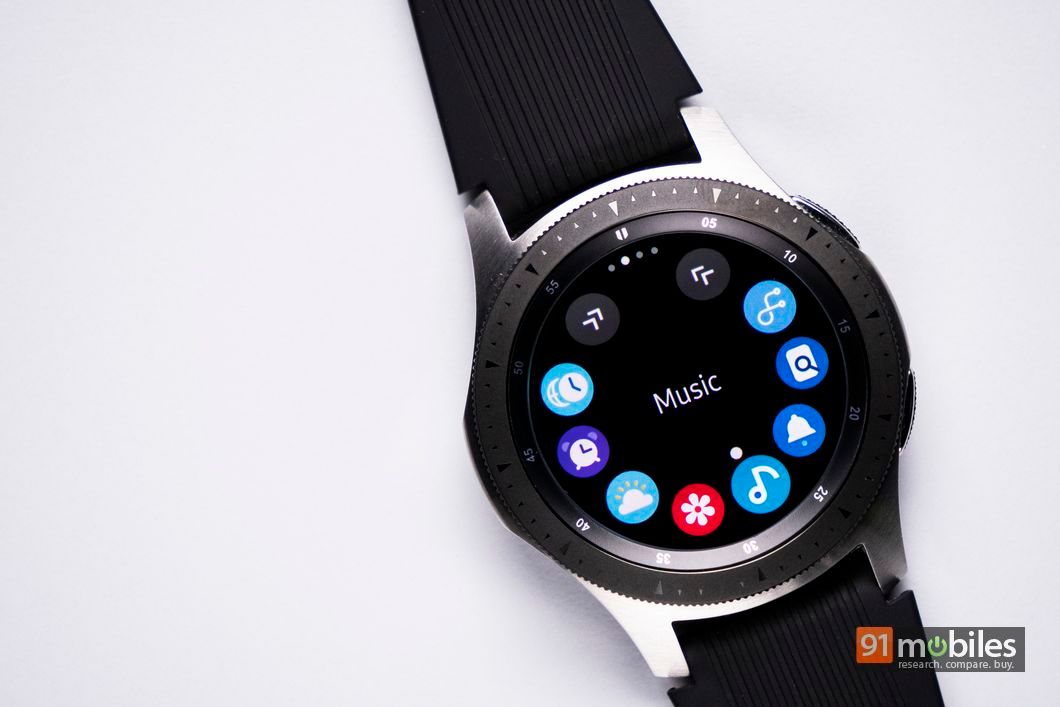 Pairing the watch with your phone is a breeze, once you’ve downloaded the required apps. The setup process also takes you through the steps for setting up the eSIM, and in my case, my Jio connection was up and running on the device in no time. The Galaxy Watch comes powered by a dual-core Exynos 9110 processor clocked at 1.15GHz, along with 1.5GB RAM (768MB on the non-LTE version) and 4GB storage. Usage is jitter-free and very smooth, and the rotating bezel makes moving around the menus a cinch. Of course, you can use the touchscreen to interact with the device too. Swipe down to access the settings panel, right to view notifications, and left to see widgets and installed apps. My only gripe is that the animations that appear when new notifications arrive linger on the screen for a couple of seconds, making the UI appear slow. 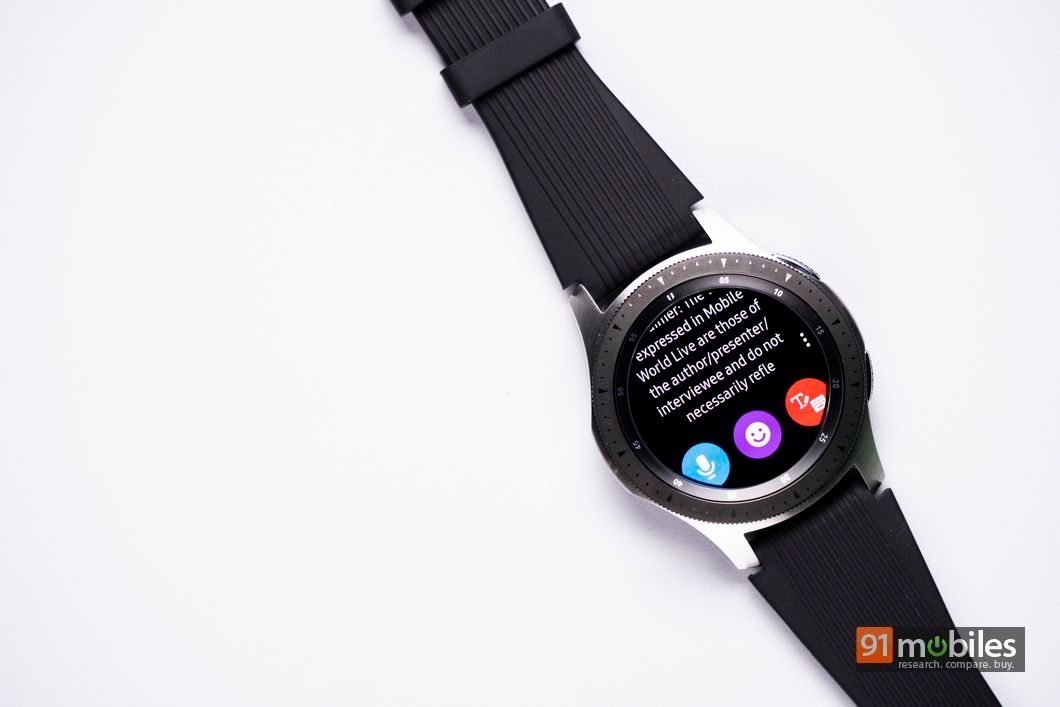 That apart, the Galaxy Watch shines in most aspects, dutifully tracking your physical activity, displaying app notifications and generally acting as a mini smartphone strapped to your wrist. You can even reply to messages by typing out text (though the small screen isn’t ideal for that), using voice dictation, or making using of customisable quick replies. The 472mAh battery (270mAh in the 42mm model) lasted me almost a couple of days off a single charge, and this is with the display set to always on, with the device either connected to the phone via Bluetooth or using mobile data. The device charges wirelessly using the included cradle, and you can even charge it using the Wireless PowerShare feature if you have one of the recent Samsung flagships. 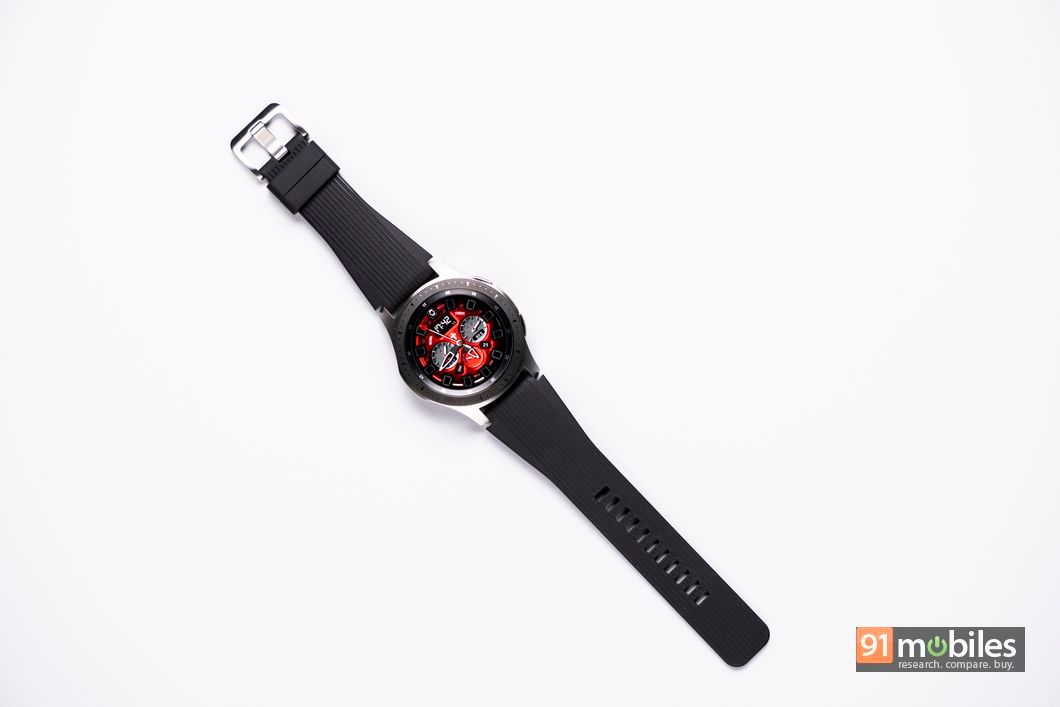 There’s no doubt in my mind that the Samsung Galaxy Watch 4G is pretty much the best smartwatch out there, especially if you’re an Android user. Sure, Apple users can’t ignore the Apple Watch, now with the Series 5 (review) and WatchOS 6 offering ECG capabilities, an always-on display and tons of other compelling features. If you’re on the Android side of things though, and cover a premium, do-it-all smartwatch, you can’t do better than the Samsung Galaxy Watch 4G. Priced at Rs 30,990 (Rs 28,490 for the 42mm variant), it doesn’t come cheap, and you can possibly get a flagship-grade Android smartphone for the same price. But that’s just the way things are, and if you’re considering calling yourself a proud owner of a brand new Samsung Galaxy Watch 4G, you probably already own a premium flagship anyway.