Infinix is more commonly known for its endeavours in the smartphone world, specifically the budget segment. The company has now come out with its first laptop lineup in the form of the InBook X1 series and following a similar strategy as smartphones, is aiming at the affordable side of the market. While the entry-level variant starts off at Rs 35,990, the version I’m reviewing is priced at Rs 45,999. The main difference between the two is that I have the 10th-gen Intel i5 CPU under the hood as opposed to the i3 running on the former. The Infinix X1 competes with the Realme Book (review) and the RedmiBook Pro (review) in the Indian market, among others. Let’s find out in this review of the Infinix X1 if it can stand up to the big boys in the affordable laptop category. 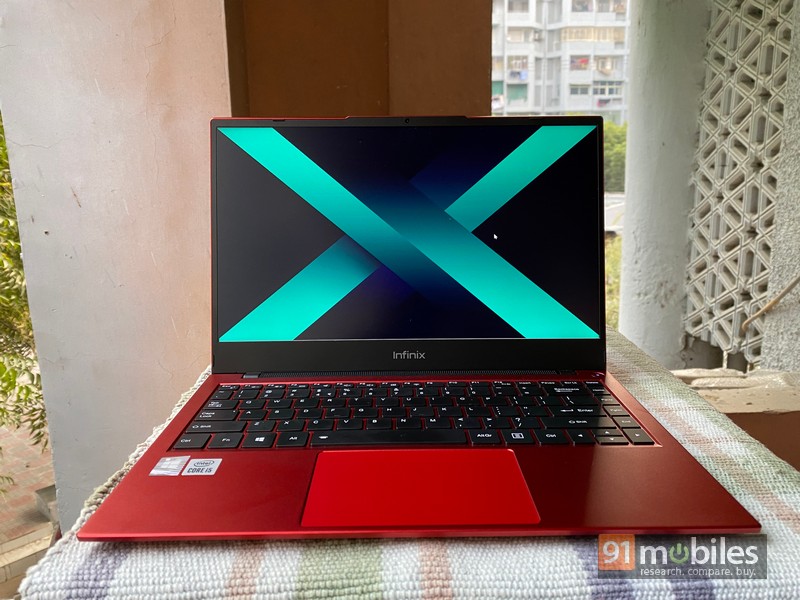 The Nobel Red variant of the Infinix InBook X1 may very well be the standout feature of the laptop. The colour is so standout that it immediately distinguishes the product from a sea of black, grey, and silver devices in the market. You also have the option to choose from Starfall Grey and Aurora Green as well. The X1 has a full unibody aluminium chassis build that adds a dash of premiumness. From the standpoint of portability, the laptop is lighter than I would have expected at just 1.48kg, and is compact enough to easily slide into a backpack. The hinge mechanism, while also offering 180-degree movement, is solid and doesn’t allow the lid to wobble even a tiny bit while typing. There is a minor indentation at the bottom of the chassis which props up the laptop slightly for better airflow. Just below the display are speakers that deliver some of the best sound that I’ve heard on almost any laptop. The overall design of the InBook X1 is polished, well made, worthy of its price tag, and makes it easily one of the best-looking laptops in the segment. 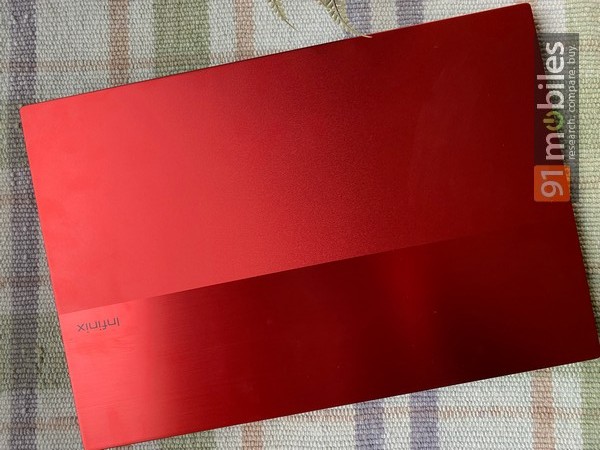 Infinix has furnished the X1 with a multitude of ports too. On the right, there are two USB 3.0 Gen A ports, a microSD card slot, a 3.5mm headphone and mic combo, and a Kensington Lock. The left side has a standard USB 2.0 Gen A slot along with dual USB C ports, an HDMI 1.4, and a toggle to turn off the webcam. With regards to wireless connectivity, the usual Bluetooth 5.1 and Wi-Fi 802.11ac options are available on the laptop. However, the 14-inch FHD LCD display on the device is average, to say the least. I was not expecting much from the viewing experience, but the brightness levels could really be cranked up. Apart from that, the display can appear dull in many situations and different viewing angles dramatically change the contrasts on the panel. 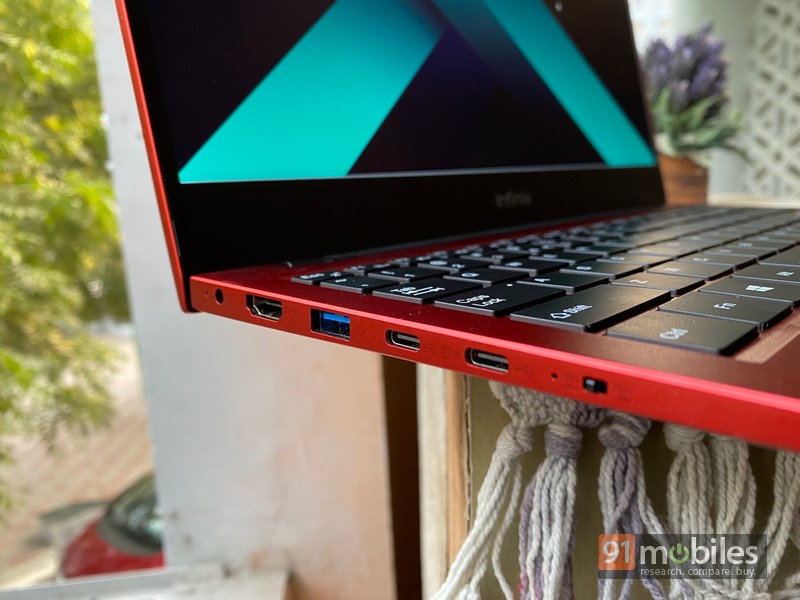 The keyboard on the laptop is good enough for relaxed typing and employs the standard scissor-switch build. The keys are arranged in a six-row layout and I was quite happy with backlighting being introduced on the keyboard which is something that has remained absent on most budget laptops. The trackpad has a textured finish to it and provides good haptic feedback. I do feel the latency could be improved but you could just as well attach an external mouse for your daily work. The webcam quality is average, and in line with what you can expect from a budget laptop. Also, there is no fingerprint sensor on the laptop for speedy authentication. 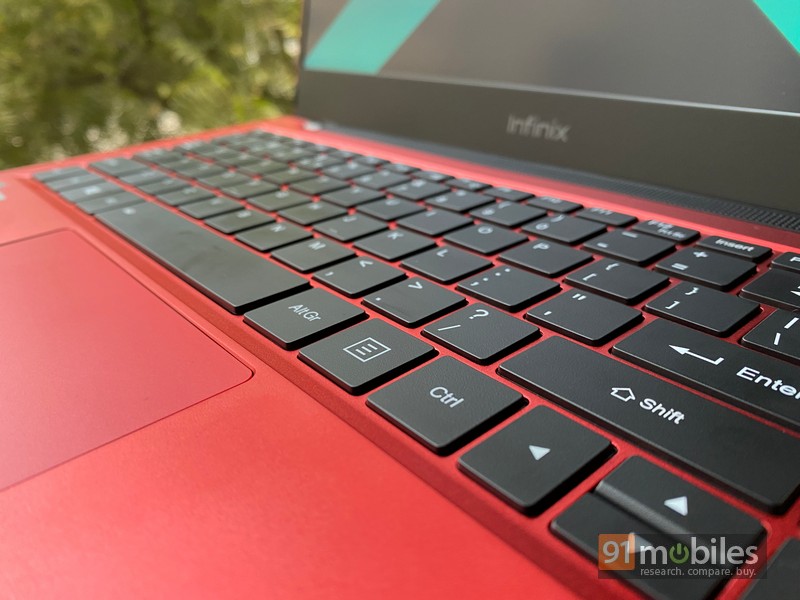 Intel’s 10th-gen i5-1035G1 CPU is running things on the Infinix InBook X1. As I had mentioned before, the base variant of the laptop runs on the 10th-gen Intel i3 chipset and costs Rs 35,999. There is also a model that comes with the 10th-gen Core i7 chip under the hood, and priced at Rs 55,999. On my i5 variant, the benchmark numbers are not very promising with a Cinebench R23 multi-core score of 3,834 which is just about average for the chipset. In real-world usage, I was able to run a number of Chrome tabs and windows alongside Microsoft’s Office suite of apps and Adobe PDF viewer quite easily. Photo editing and cropping on FastStone was quick, and so was playing videos via VLC player.

The Intel UHD integrated graphics aren’t ideal for running heavy games. I ran Counter-Strike: GO at the lowest graphics settings, with the device barely outputting 45fps and throttling performance within half an hour. The situation was about the same for Valorant as well. My point is that if the laptop is not stressed beyond its potential, like playing heavy duty or even low-intensity games or editing 4K video footage, the Infinix InBook X1 is a worthy everyday companion on a budget. Something to also note here is that the InBook X1 will ship with Windows 11 out-of-the-box. The laptop has 512GB of NVMe PCIE 3.0 SSD storage, 8GB of LPDDR4X RAM and boots up in about half a minute. As per the CrystalDiskMark benchmark, the SSD’s read and write speeds were a healthy 2,397MB/s and 1,673MB/s respectively. The device packs in a substantial battery backup which the company claims can provide up to 13 hours of usage. My time with the device mostly involved browsing YouTube and watching the latest season of Succession. I can tell you that the InBook is quite battery efficient and I got about a very healthy 8 hours of screen-on time. There is a 65W Type-C charger present in the box, though the cable is woefully short for use with a laptop. The good thing though is that about 70 percent of the battery is juiced up in under an hour. 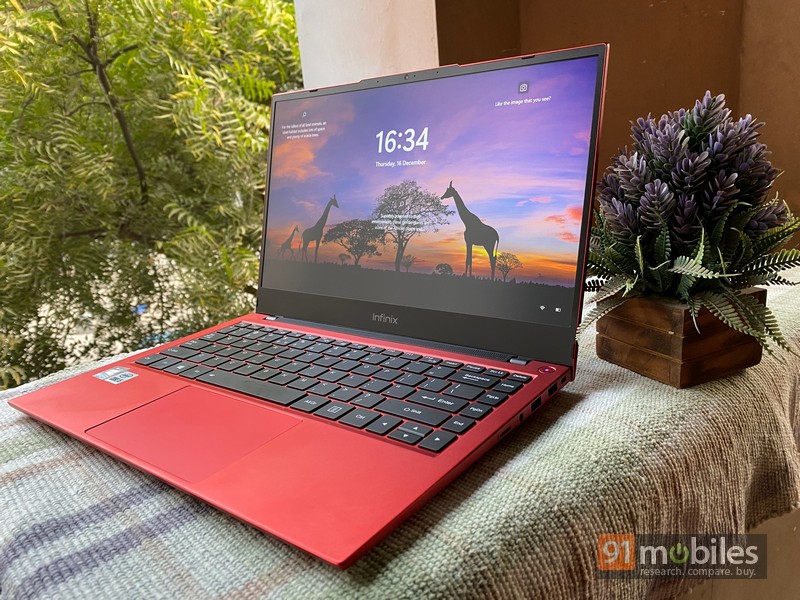 I think that the display overall could have been fine-tuned, but the laptop’s other attributes offset this drawback. On the positive side, the device offers decent performance to keep your PowerPoint presentations and Word documents open alongside a whole bunch of Google Chrome. The speakers on the device are excellent as is the battery life. In terms of portability and overall design, the InBook X1 has very little competition. In sum, I have no problems recommending the Infinix InBook X1 to students or working professionals who have a budget of under Rs 50,000.