When Sony launched its MDR-1000X headphones three years ago, the company split the premium headphone segment in half. On one end, fans were cheering for Sony’s latest offering, whereas on the other, there was a loud clamour in favour of the then king of ANC headphones, Bose. Fast forward to today and the scenery still hasn’t changed much, with Sony’s WH-1000xM3 (review) and Bose’s QC 35 II (review) still battling it out amongst themselves. 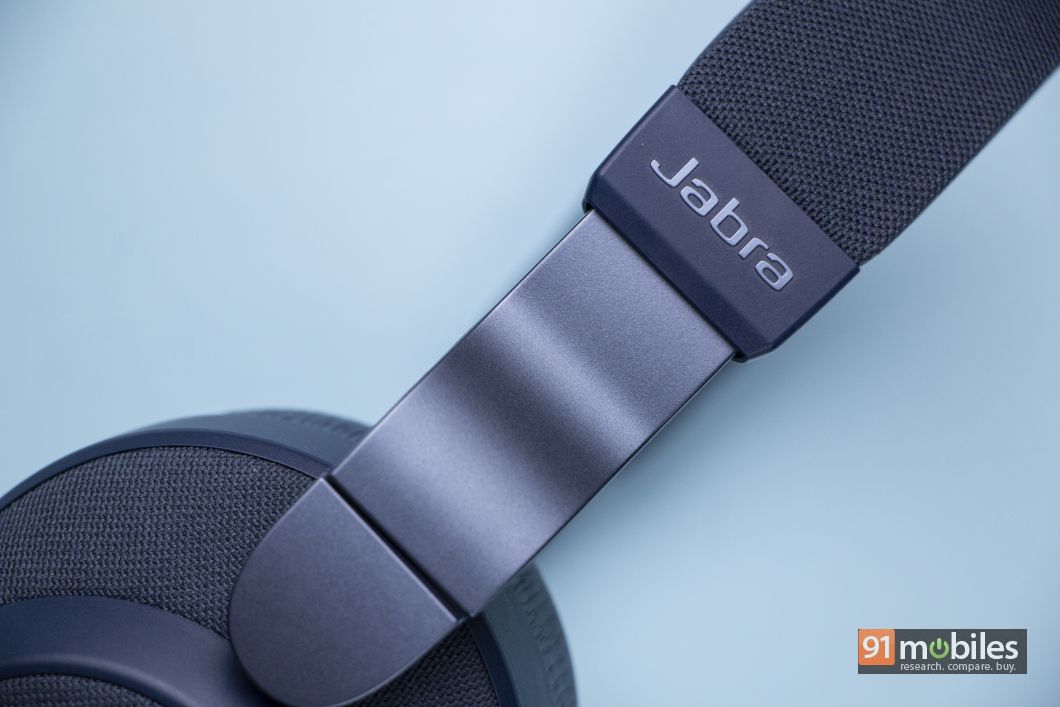 That’s where Jabra’s latest headset, the Elite 85H comes into the picture. Having launched it recently, the brand hopes to break the Sony-Bose duopoly and carve a name for itself in the premium audio space. I’ve been testing the unit for a week and to know if you should grab a pair, read on.

Sony and Bose have spent the last few years tinkering with the designs of their high-end headsets, making sure that their products look good and fit well. Therefore, it comes as little surprise to see Jabra borrow some design elements from the competition for its Elite 85H headphone. For starters, barring the materials used in the construction and the placement of ports, the outer shell of the Jabra Elite 85H looks identical to Sony’s WH-1000xM3 headphones. Moreover, the company has even incorporated some stylistic features from Sennheiser’s PXC 550 headset (review), in the sense that neither of the two models features a power button and instead, turns on by twisting the earcups. 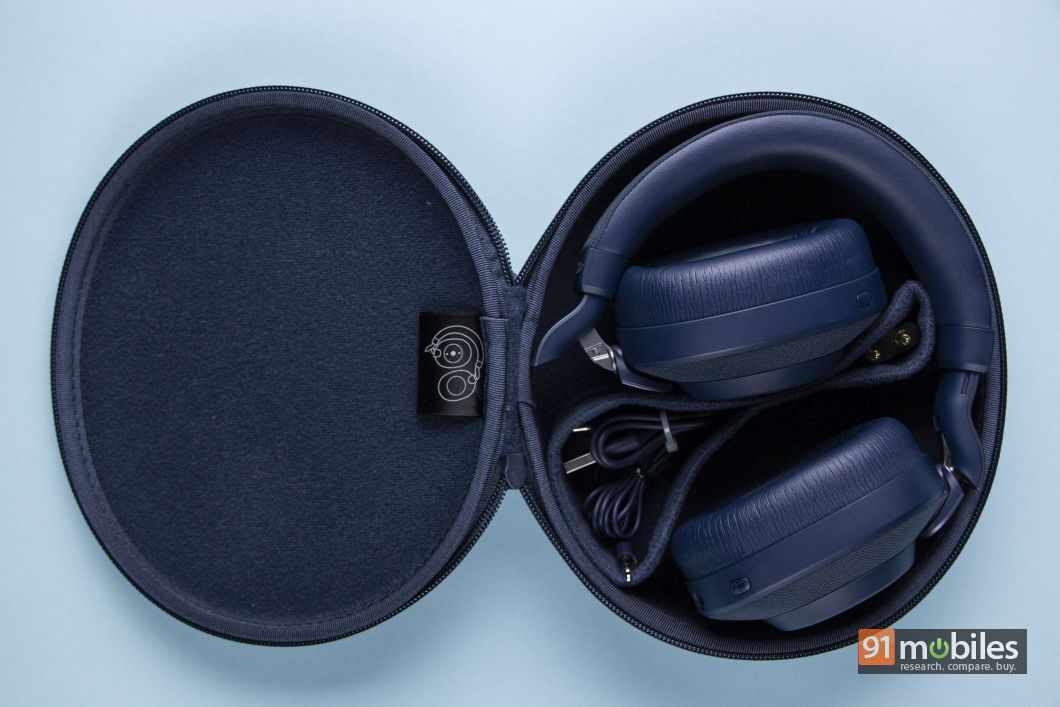 Now, I don’t mean to rain on Jabra’s parade, especially when you consider how well built the brand’s latest headphone is. In fact, it’s the only premium headset in the market to ship with IP52 certification, meaning it should outlast a walk or two in the rain. What’s more, the headphone is supremely comfortable to wear, thanks to its thick, cushy ear pads and the voluminous stuffing inside the headband. So much so, I distinctively remember dozing off during a six-hour flight while listening to music on the Jabra Elite 85H – the clamping force is just right for my head and even after staying on my ears for hours at end, the padding didn’t feel warm in the slightest. 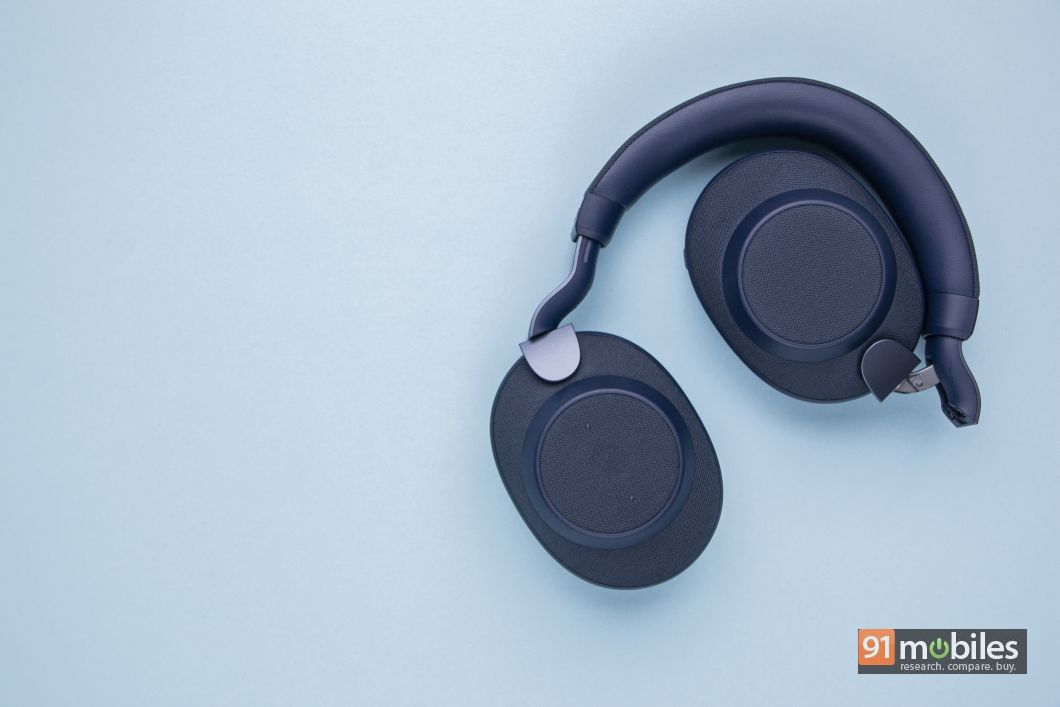 I was having a conversation with a friend regarding the overall design of the Jabra headset, and he stated that the Elite 85H hit the sweet spot between classy and rugged. I agree with his assessment, as the fabric coating layered on top of the ear cups as well as the headband does feels supremely premium. At the same time, the metal hinges which have been bolted tightly to the earcups impart a sense of robustness whilst unfolding the pair of cans. In a nutshell, while the design of the Jabra Elite 85H shares some similarities with the competition, that doesn’t make it any less flattering. 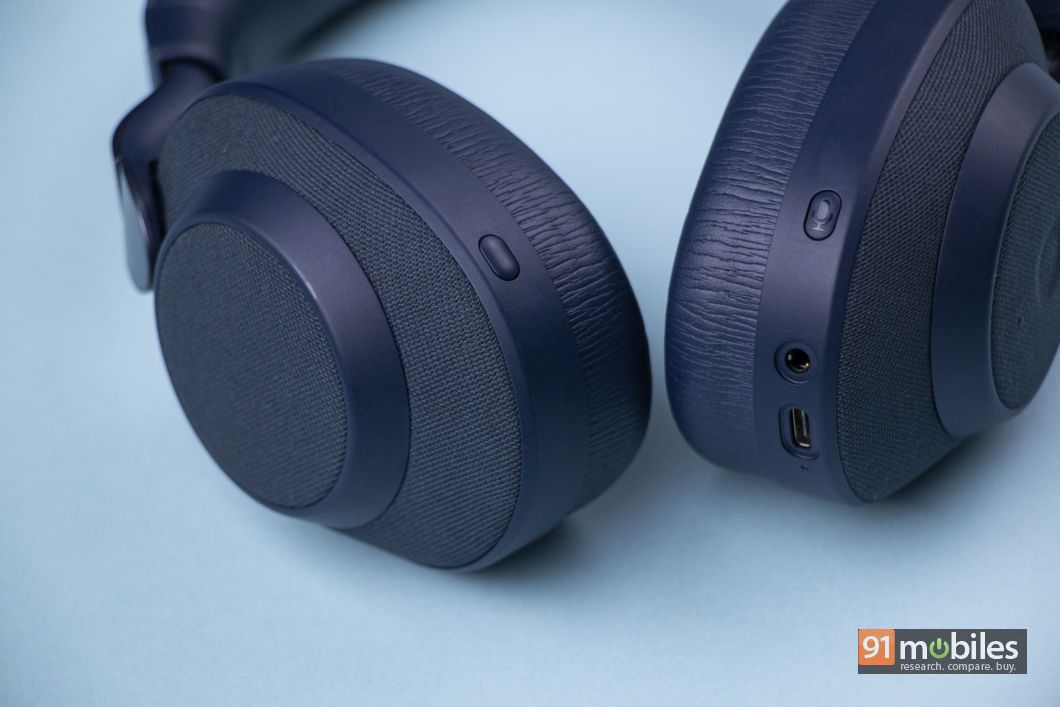 As for I/O, the Jabra Elite 85H has features a USB Type-C port and a 3.5mm analogue port below the right earcup. The headset also comes with two physical buttons on the periphery of either earcups, which serve various functions. The button on the left can be used to flip between the company’s HearThrough mode, which essentially lets some noise in to keep you aware of your surroundings, as well as toggle active noise cancelation. The button on the right can be used to invoke the search assistant on your phone (Google Assistant or Siri) or to mute the microphone. 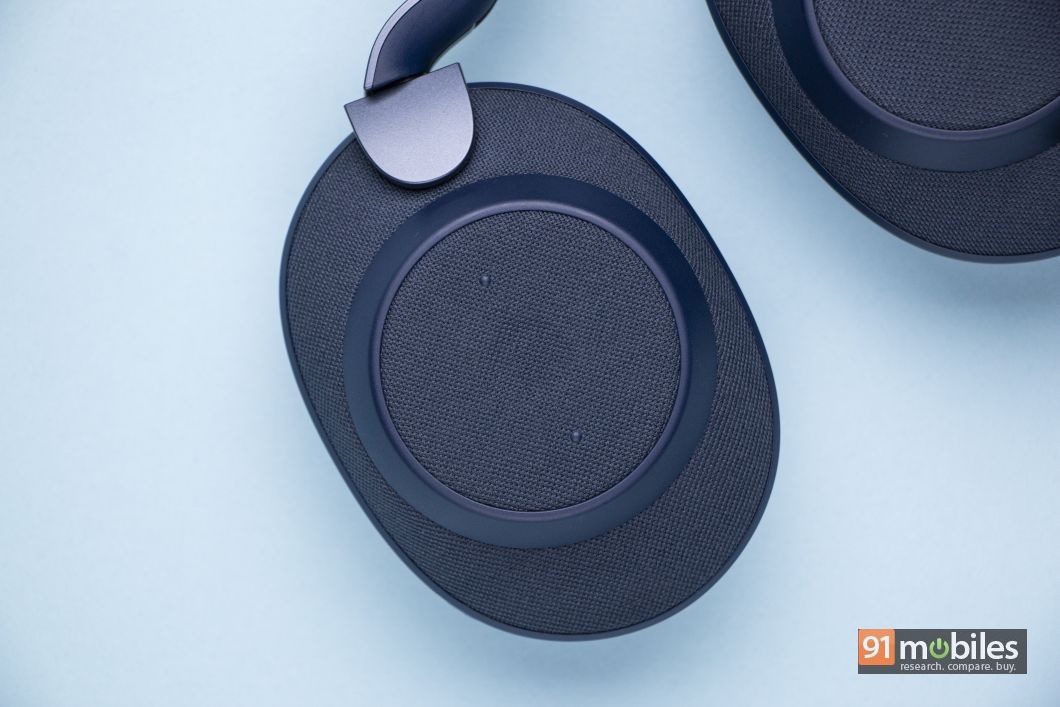 What’s more, unlike Sony’s WH-1000xM3, the Jabra Elite 85H ships with physical toggles on the right earcup which can be used to control the volume, jump from one track to the other and put the headset in pairing mode. The control scheme is quite easy to grasp, and the physical buttons are sufficiently tactile, so no complaints here.

When I reviewed the Jabra Elite 65t Active, I wrote about the company’s intuitive Sound+ companion app for the headset. The same app can also be used in conjunction with the Elite 85H to control various aspects of the headphone. Here’s a quick checklist of everything you can do with the app –

What’s more, similar to the Sony WH-1000xM3, the Jabra Elite 85H also automatically pauses a song whenever you take the headphones off. Moreover, the unit even resumes playback on its own once you’ve put the headphones back on. During my testing, the feature worked flawlessly, and I can’t wait for more manufacturers to incorporate it into their offerings. 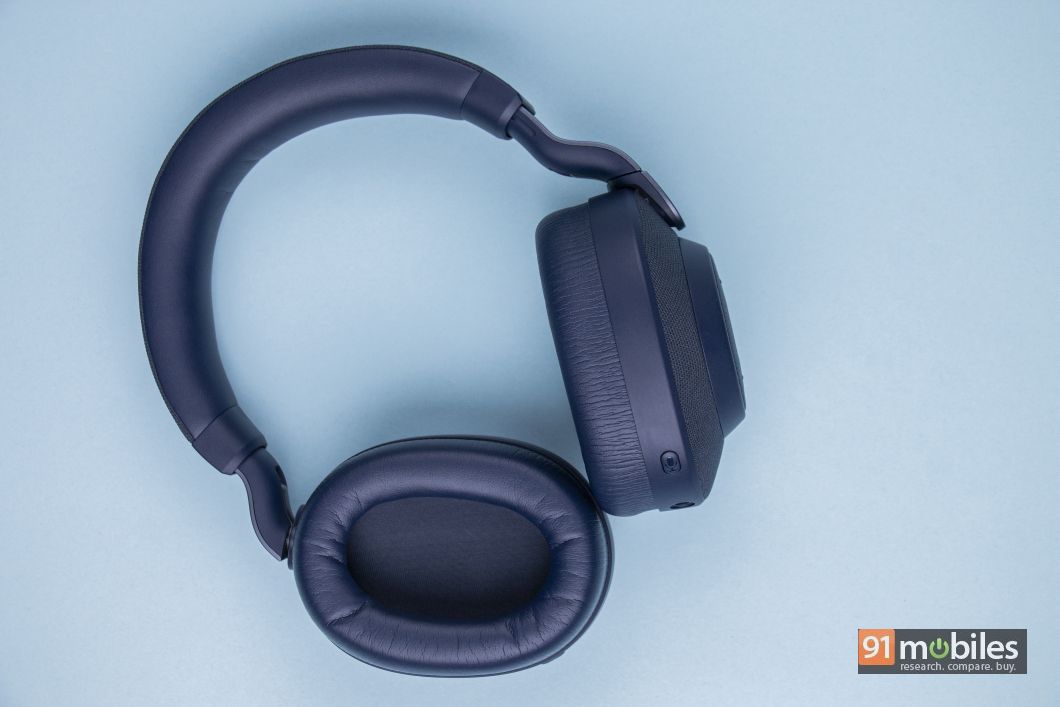 The Jabra Elite 85H makes use of four microphones to cancel out background noise. While I was quite happy with the headphone’s ANC performance, it’s still not in the same league as the pin drop silence offered by Bose and Sony’s cans. While the Elite 85H comfortably muted noise from an airplane engine or the rattling windows in a bus, it didn’t fare very well in cancelling out the chatter in my office. Don’t get me wrong, the headphone does subdue voices too, but it doesn’t do as good a job at it as the competition.

The Jabra Elite 85H sounds terrific, and the headset is backed by a pair of 40mm dynamic drivers inside each earcup. The headphone connects to compatible devices over Bluetooth v5.0, and it can maintain a connection to two devices simultaneously. Unfortunately, the Elite 85H only comes with support for SBC codec and therefore, you won’t be able to stream hi-res audio through the headphone. For its asking price, I feel that the company should’ve at least added support for aptX HD if not LDAC, and I’m certain that Jabra’s decision to omit said codecs will not sit well with serious audiophiles. 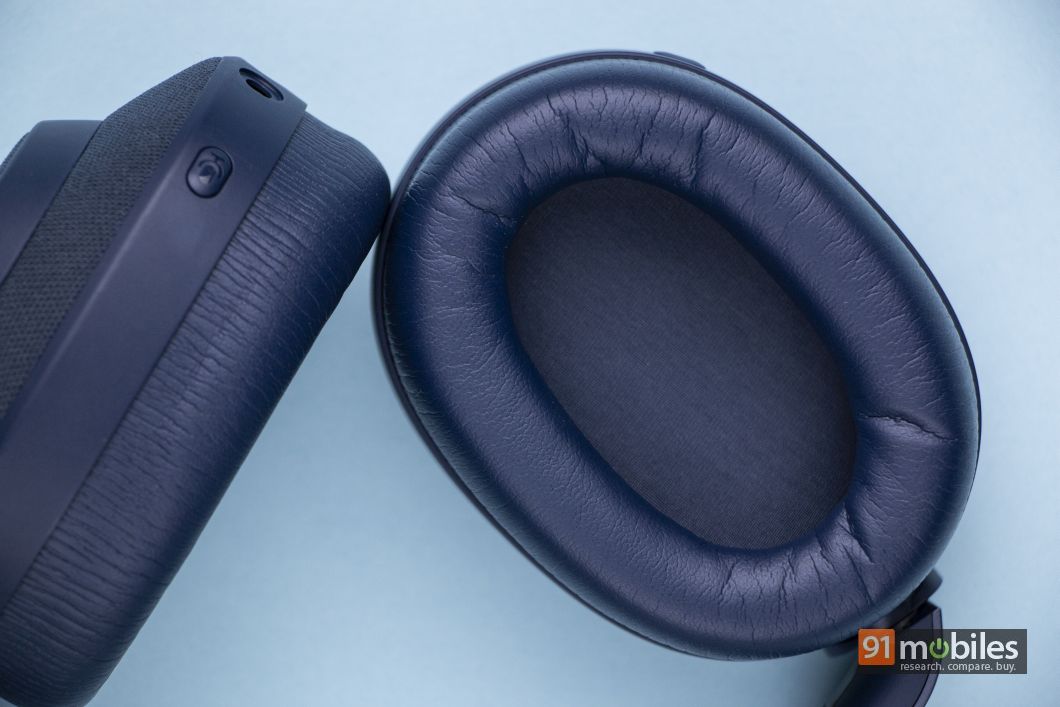 Furthermore, as of writing this review, the headset lacks Apple’s AAC codec too, though I’ve been told that the company will be adding support for the same by the end of the month.

That being said, the lack of aptX HD codec should only concern you if you’re relaying hi-res FLAC files over Bluetooth to the headphone. For everyone else who gets their dose of music from services like Apple Music or Spotify, streaming music over either of the two codecs (aptX or SBC) won’t have any difference in fidelity. 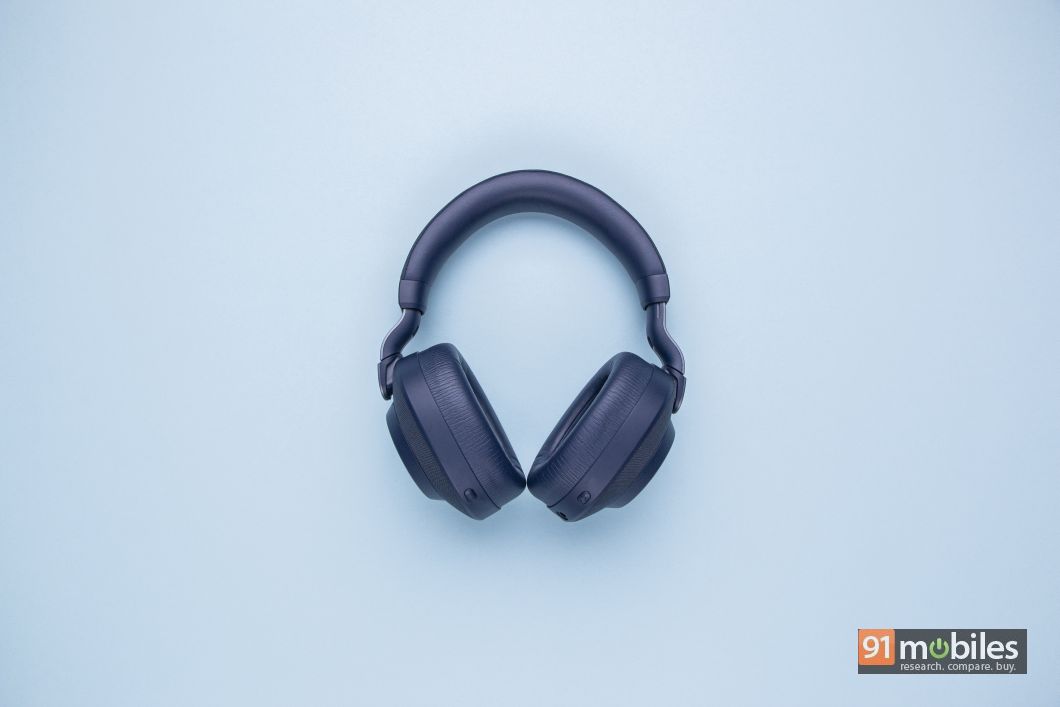 With that out of the way, I must admit the Jabra Elite 85H is a lot of fun to listen to. The headphones have a warm sound signature which has a tilt towards low-end frequencies. Correspondingly, songs with good beats or a thumping bassline sound phenomenal. Listening to Billie Eilish’s Bad Guy, I couldn’t help but tap my feet to the energetic rhythm at the beginning of the track and I was in awe of how well the headphones’ transition between the beats and the vocals. Since there’s minimal decay, the booming bassline doesn’t linger around once the vocals have kicked in.

Now, admittedly, the Sony WH-1000xM3’s bass output has a tighter slam, but EDM aficionados will still find plenty to love about the Jabra Elite 85H. 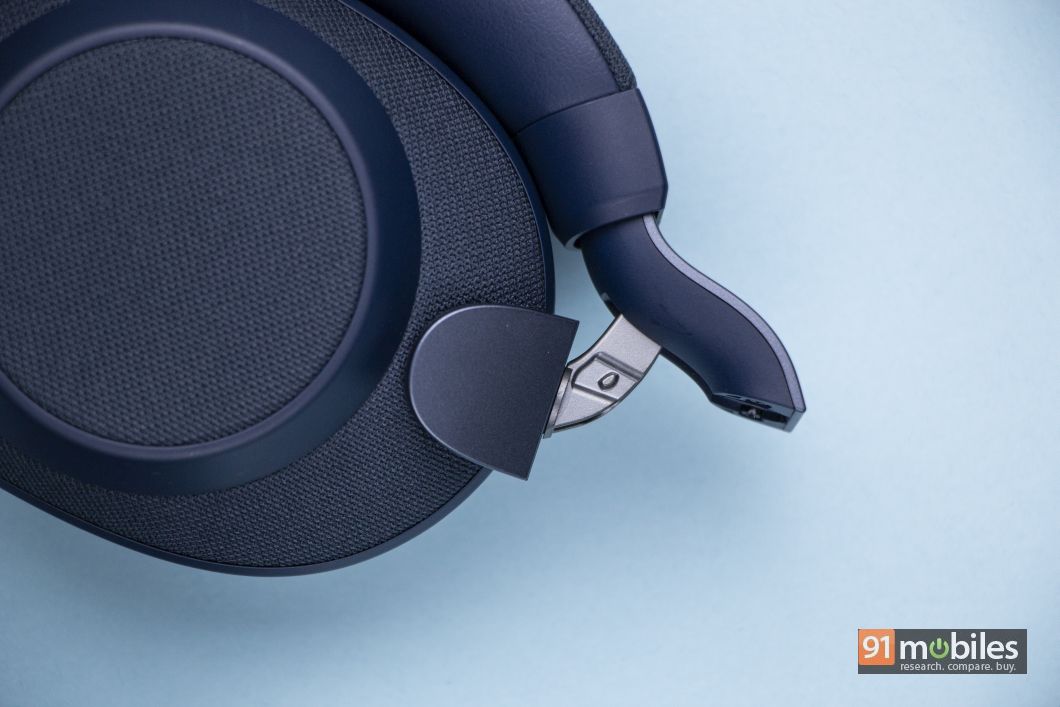 The Jabra Elite 85H boasts a surreal mid-range too, and you’ll revel listening to your favourite singers on the headphones. During my testing, I found the pair to be mid-forward, meaning in any given track, the vocals are presented to the listener front and centre. So, if your playlist comprises artists like Hozier and Kodaline, you’ll find it really hard to keep track of time. 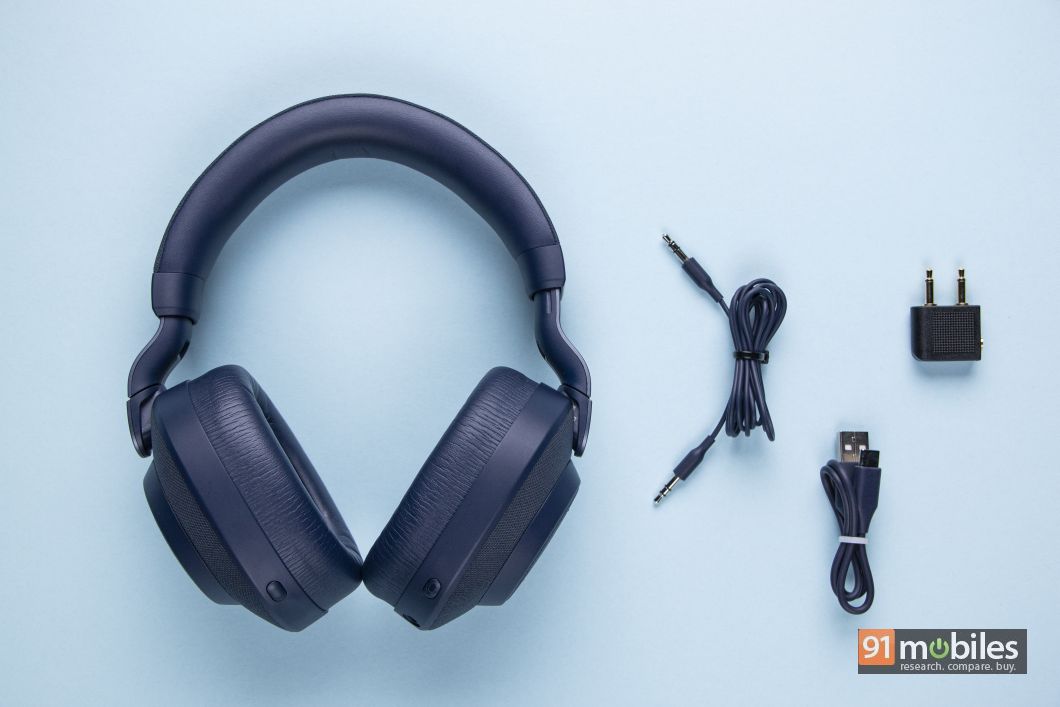 Out of the box, songs from the rock/alt-rock genre don’t sound as lively on the Elite 85H as they do on say, the Beyerdynamic Aventho Wireless. Thankfully, after playing with the EQ for a while, I was able to get a satisfactory response. The headphone boasts stellar imaging too and therefore, you will be able to tell every time the lead guitarist plucks the strings and hear it alongside the rest of the instruments coherently.

The Jabra Elite 85H retails for Rs 28,999 in India and for the price, the pair of headphones offers a robust, good-looking design, phenomenal battery life, good audio output, and reliable ANC. Unfortunately, the headset’s pricing pits it against the Sony WH-1000xM3, which retails for Rs 1,000 cheaper, and offers a more musical sound output as well as better noise cancelling. Adding to Jabra’s woes, unlike Sony’s offering, the Elite 85H doesn’t come with support for audio codecs like aptX HD and LDAC, both of which facilitate the transmission of hi-res music over Bluetooth. 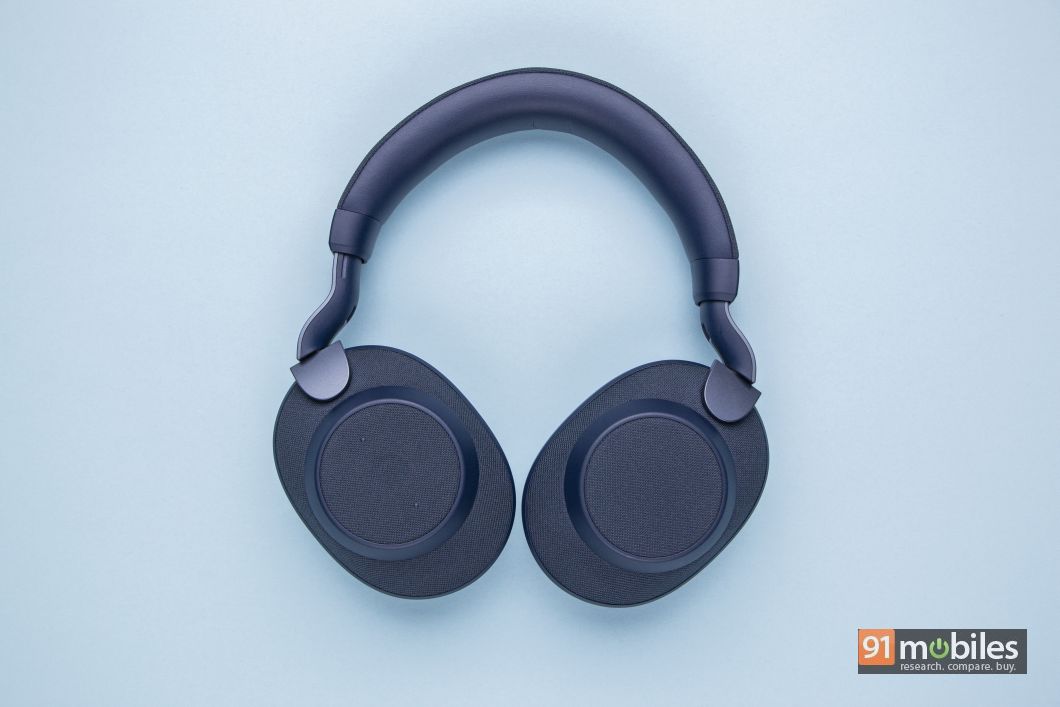 Everything considered, I feel Jabra should’ve been more competitive with the pricing for its latest premium headphone. In fact, the company has priced the headset at $300 in the US, which roughly translates to Rs 20K in India. At that price (or even a couple thousand more), the Elite 85H is honestly a no-brainer.

Unfortunately, as things stand, you’ll find your money best spent on the WH-1000xM3. And that’s quite a shame because with the Elite 85H, Jabra posed a legitimate threat to the Sony-Bose duopoly.