It was only a matter of time before someone demanded TVs to be more than just a gateway to cable channels. Therefore, after upping the resolution, slimming down the bezels and adding extravagant OLED/AMOLED panels, the only void left for TV manufacturers to fill was of adding a brain to the system. And thus, the smart TV was born. To its core, a smart TV is a TV which comes with internet connectivity, allowing users to stream content from various apps. And although the concept of smart TVs has been floating around for a while now, they have only recently started entering the mainstream consumer market. With better penetration of high-speed broadband in India, the need for smart TVs has mushroomed in the sub-continent. One of the hottest-selling smart TVs last year came from Chinese tech giant LeEco in the form of its Super 3 series. The company has just updated its smart TV lineup with the Super 4 series. I had the chance to test out the Super 4 X40 TV and here are our two cents on the same. 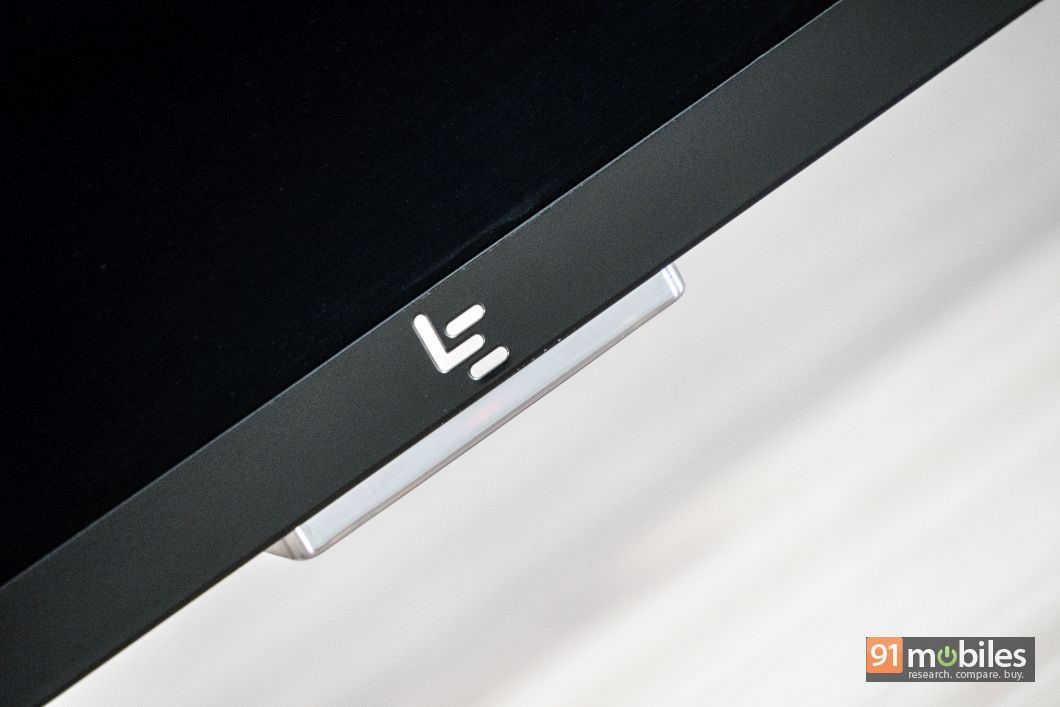 Inside the retail unit of the Super 4X40, users will find the TV itself along with a remote, a pair of metallic stands and a bunch of cables. The TV ships with an entire assortment of different cables which you’ll know is a big deal if you’ve ever unboxed a smartphone which didn’t ship with a pair of earphones. Unwarranted rant aside, let’s start by talking about what I like about the LeEco Super 4 X40.

Last year’s LeEco Super 3 series TVs were sleek, offered narrow bezels and came with wave-shaped stands which made them the centre of attraction regardless of where you put the TV. This year’s models, on the other hand, look a lot more conventional. This in no way means that the Super 4 X40 is bad looking. On the contrary, the metal finish of the TV gives it a rather premium feel and the X40 maintains its sleek profile for the most part, that is until users travel down the TV back a bit and notice the slight bump.

On LeEco’s behalf, the bump does allow the X40 to deliver exceptional sound. More on that later, though. Let us reiterate that the design of the Super 4 X40 isn’t bad. It’s light despite being crafted out of metal and has sleek bezels which don’t obstruct with the viewing experience. However, while the company’s motto is about buying tomorrow’s devices today, the X40 couldn’t look anymore contemporary. 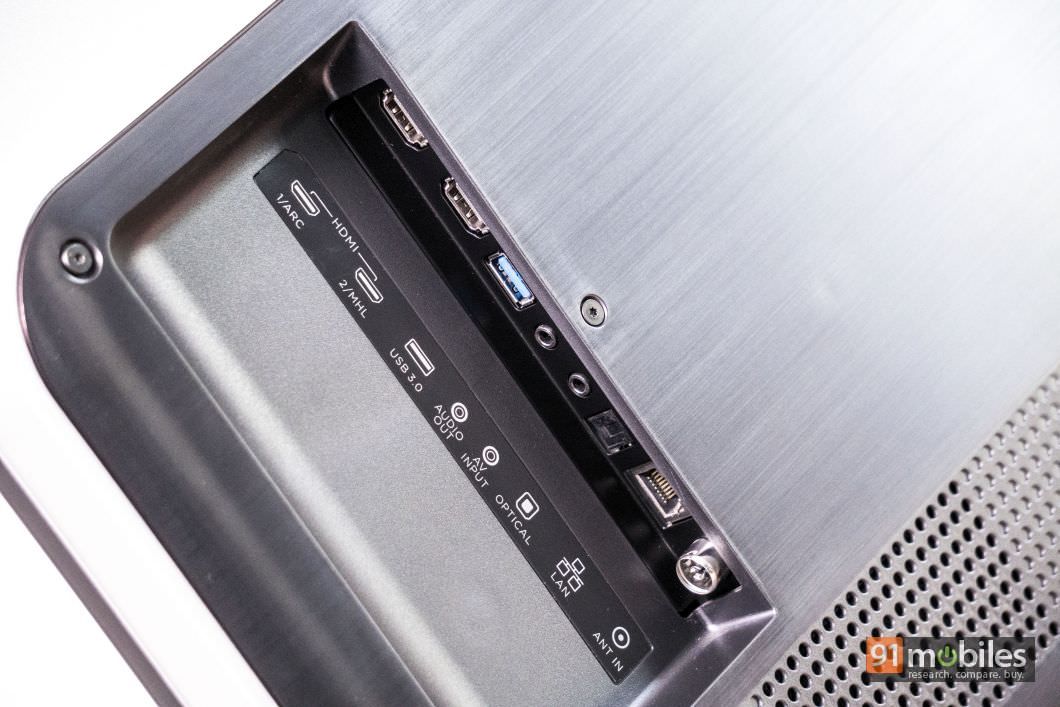 Moving on, the back of the TV is home to an ample amount of ports which include two HDMI ports along with an audio-out, AV Input, optical audio, Ethernet, ANT IN port and a USB 3.0. There is a separate USB port on top of the TV which allows users to easily connect a web camera to the TV as well. 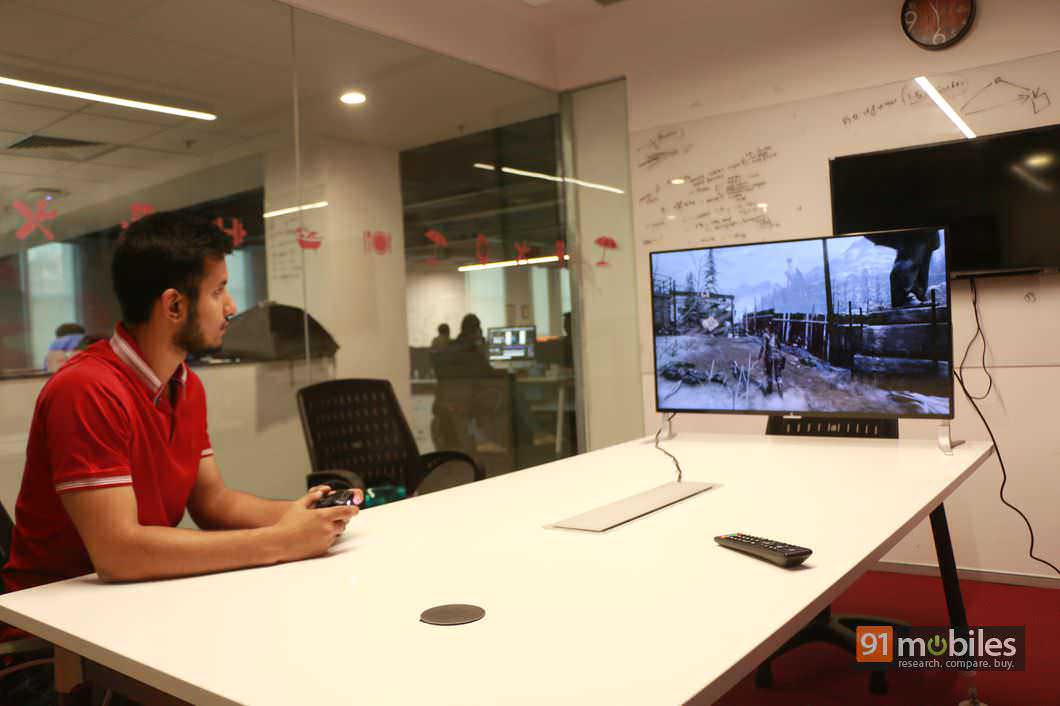 Remember the bump we mentioned a while ago on the X40’s back? Well, it is the reason why the TV is able to deliver such stellar sound. I don’t mean to sound poetic, but playing Rise of the Tomb Raider on the X40 made me feel like I was experiencing turbulent storms alongside Lara. The sound delivery is crisp and clear thanks to the Dolby Digital Audio and DTS system which comes bundled with the X40. At max volume, you would experience some minor shrills in audio, though that isn’t the typical viewing scenario in any case. I would like to point out that the X40 doesn’t get too loud, so if you were thinking about disrupting your neighbour’s sleep, you should probably look elsewhere. However, if you do want a TV which doesn’t require you to buy a sound bar as an accessory, then the X40 gets my vote for it. 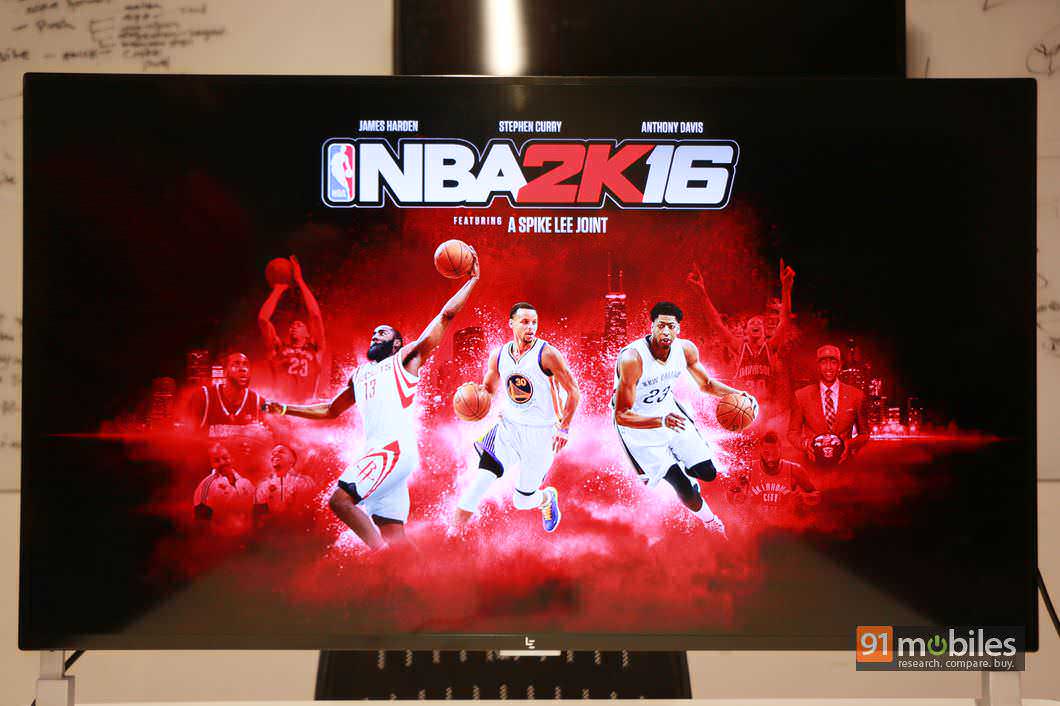 In my books, the most important aspect of a TV, smart or otherwise, is to deliver good picture quality and the X40 does that. I found no issues with the screen’s uniformity as the images were distributed across the display evenly. The panel, although reflective, gets sufficiently bright and there is absolutely zero backlight bleed on the Super 4 X40. While all this sounds good and dandy, the star of the show remains the X40’s ability to produce deep blacks. And by deep, I mean OLED-esque deep. Viewing time lapses of a starry night were an absolute joy on the X40 and while the panel might seem oversaturated to some, the contrast between the darker and lighter tones made my eyes pop out of their sockets (in a good way).

There was no discernible blur when the view quickly changed from one scene to the other, especially whilst playing action-packed games such as the Rise of the Tomb Raider and Fifa 16 which can be accredited to the TV’s MEMC technology. 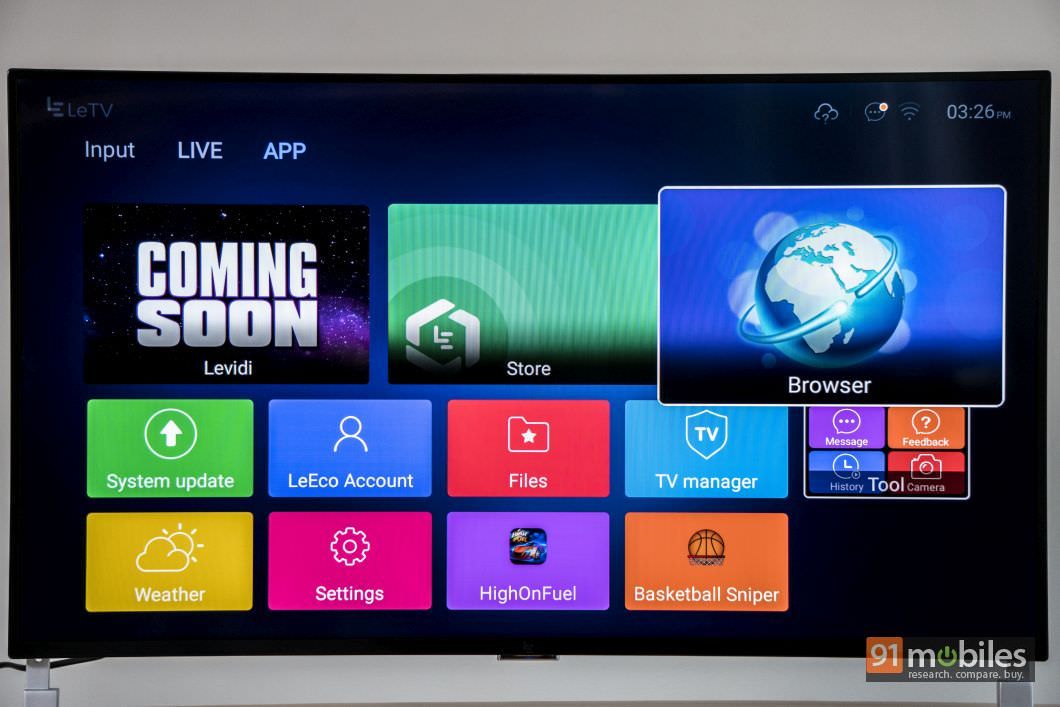 The LeEco Super 4 X40 is the first full HD TV in India to come with HDR-10 support out-of-the-box. For the uninitiated, HDR-10 is a generic form of HDR, which stands for High Dynamic Range. The Dynamic Range of a scene refers to how different the brightest parts (highlights) of the scene are from the darkest parts (shadows). Therefore, what HDR TV’s essentially do is expand this range significantly thereby allowing for a much higher contrast ratio. HDR TVs are also capable of producing more accurate and wider gamut of colour, particularly in challenging situations like sunsets, where several different hues of orange come into play. In short, HDR brings more realism and depth and makes the images and videos pop on screen. 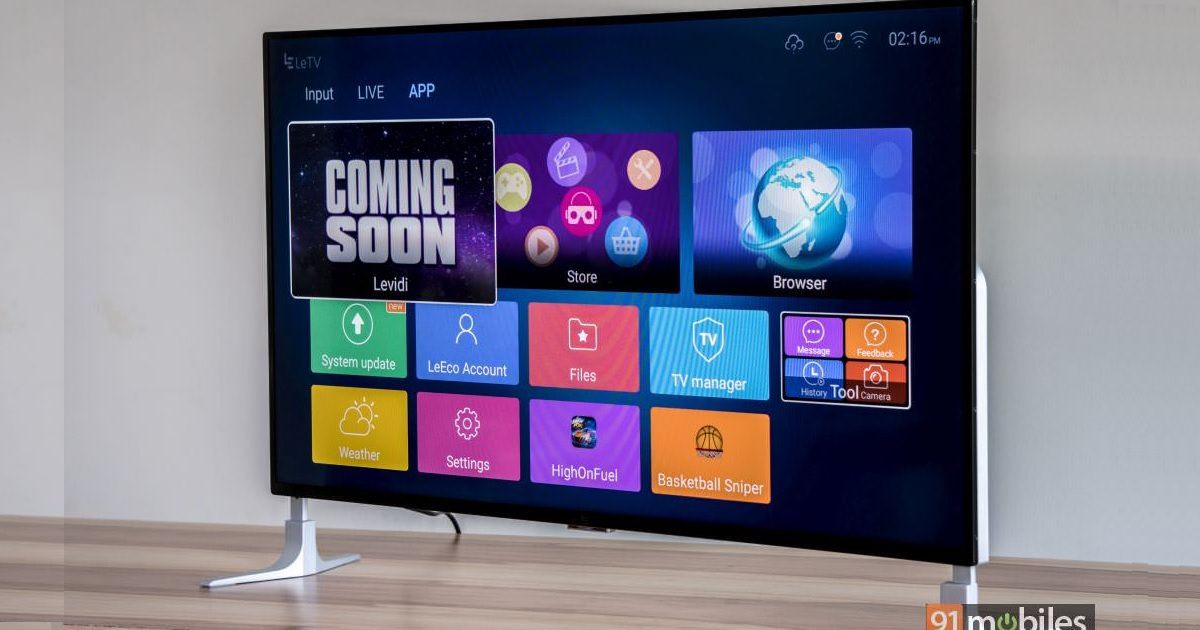 Well, why would I dislike a TV which costs just Rs 46,990 and ships with HDR-10 integration out of the box? I am glad you asked. At the moment, only a handful of services like Netflix and Amazon Prime allow users to stream HDR content. YouTube has some HDR ready channels too, but they require users to purchase a device with YouTube HDR such as the Chromecast Ultra. Surprisingly, none of the aforementioned apps (Netflix, Amazon Prime) were available on LeEco X40’s app store. In fact, the TV didn’t even come with an app for YouTube, which in 2017 is the bare minimum for any TV set to qualify as ‘smart’. 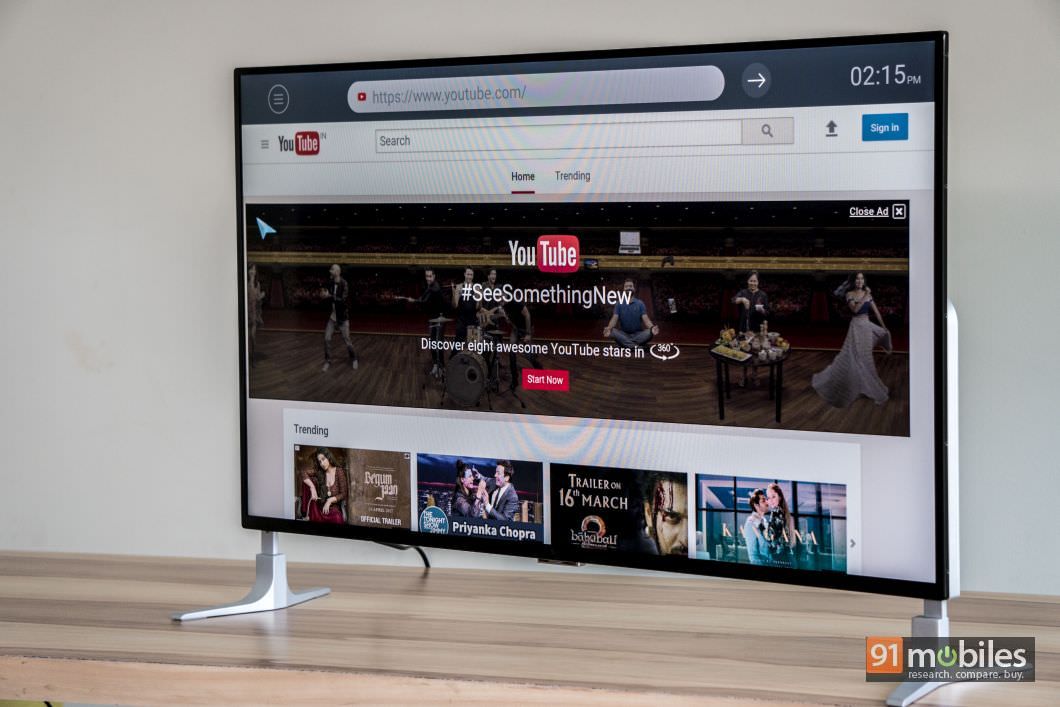 While the LeEco Super4 X40 feels like a Hotrod on the outside, it’s as sluggish as a bullock cart on the inside. The company boldly states that the Super 4 X40 comes with the ‘fastest processor in the industry’ which allows for ‘seamless transition between apps’, claims which couldn’t be farther from the truth. For starters, the TV takes a good 20 seconds to boot up. Once on, navigating the UI is painfully slow and glitchy, with a clear delay between the buttons pressed and the action displayed on the screen. Moreover, of the handful of games that we were able to install on the TV from the company’s app store, none of them were compatible with the TV’s remote. Speaking of which, the TV remote on the Super4 X40 doesn’t come with air mouse functionality which was present on the Super3 lineup. Therefore you can throw away the idea of casual gaming when you buy the LeEco Super4 X40. 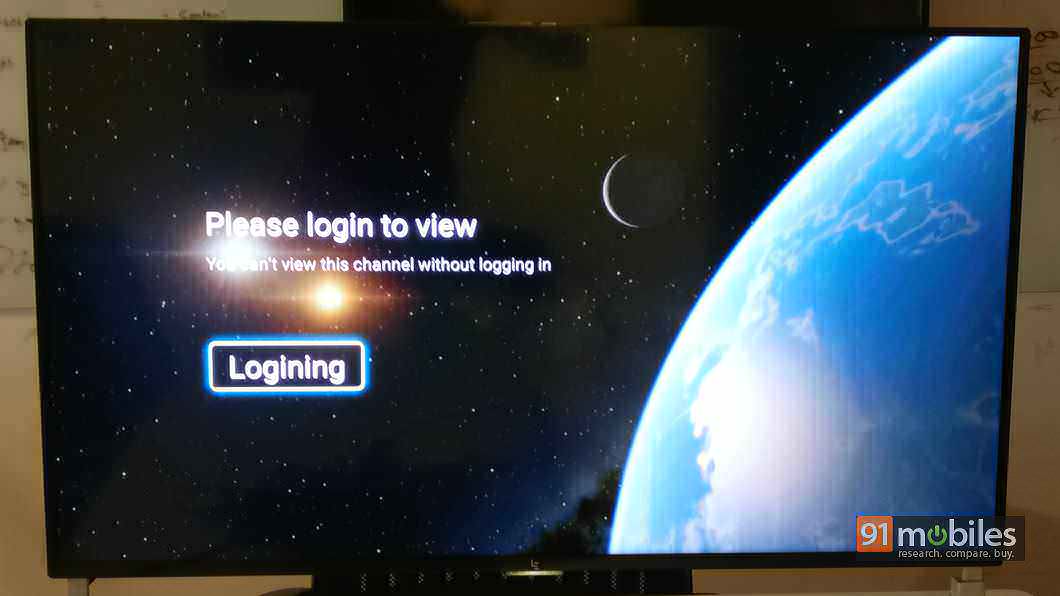 Adding insult to injury is LeEco’s live TV mode powered by Yupp TV, which promises a slurry of channels available for live streaming on demand. In practice, however, the X40 was stuck at a ‘Logining’ prompt when I tried to access the Live TV features. And no, that wasn’t a typo on my part.

The biggest setback which Chinese brands faced when they first entered the Indian market was to establish themselves amongst the big names in the industry. This meant having to sell their products which came with beefier specs at lower price points. The LeEco Super4 X40 is priced similarly to some smart TV’s from brands like LG, Samsung and even Sony which begs the question – why would you pay the same amount for a smart TV from a comparatively new brand over established ones? Especially when the competition is offering a TV which comes pre-installed with all the streaming services you might need, a much richer app store, and a UI which isn’t plagued with lags or stutters on boot. If you could somehow convince yourself that you won’t be using the smart features all that much, then why not settle for a 4K TV from a brand like Panasonic or Phillips for nearly half the cost? 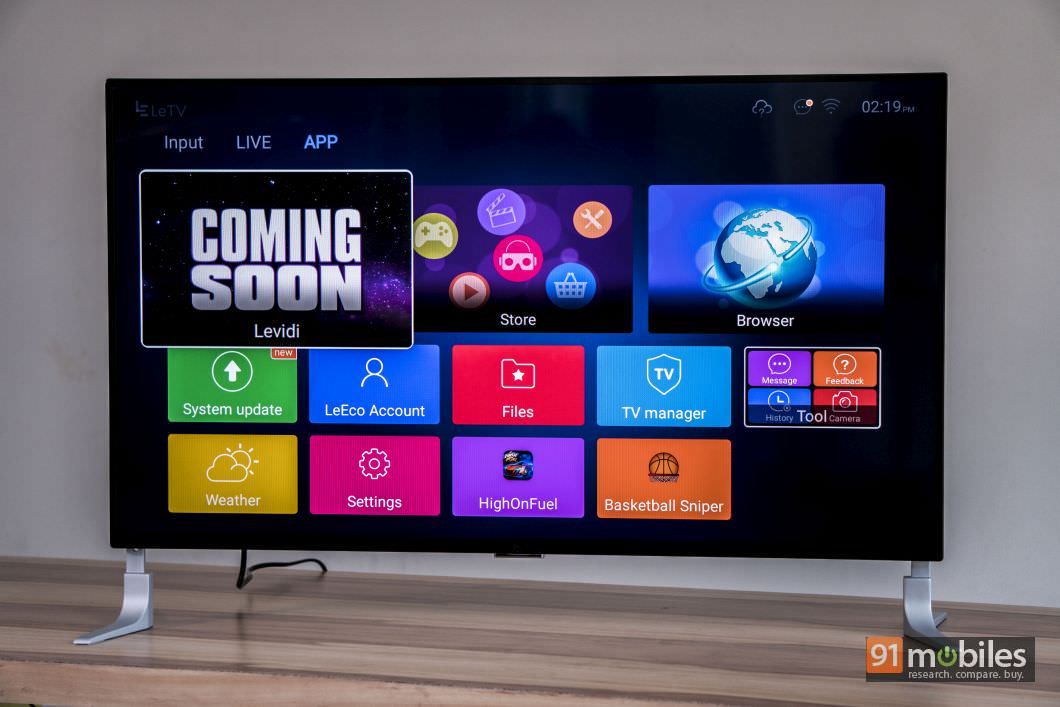 While the LeEco Super4 X40 is a decent TV which offers exceptional sound and a quality display, the asking price of Rs 46,990 is just too steep to earn a recommendation from me. Even at its reduced promotional price of Rs 42,490, the X40 isn’t a good buy in my books especially when the competition is offering better smart TVs for the same price.