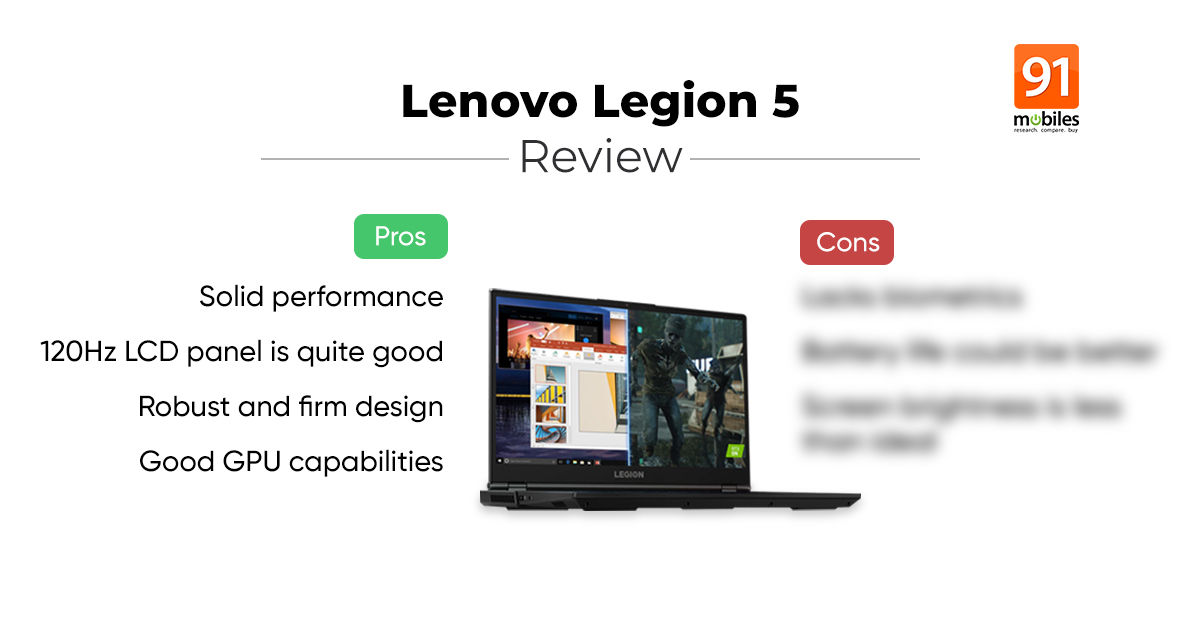 Lenovo is the world’s biggest PC maker in terms of shipments and for good reason – the company’s value-for-money lineups for professional and casual usage sell in big numbers, and the brand also offers a bunch of gaming notebooks under the Legion moniker. In fact, I have been quite impressed with the recent slew of products in the Legion lineup, especially the ones retailing under Rs 1,00,000. Case in point, the Legion 5 laptop, which is the latest in a rather short line of notebooks to be powered by the 4000 series Ryzen 5 4600H CPU. As for the laptop’s other specialties, buyers opting for the machine also get a Harmon Kardon-backed audio setup, along with a 120Hz refresh rate panel. Priced at Rs 79,990, the Legion 5 is perfectly positioned to be one of the finest gaming laptops for those on a budget, but is there more than meets the eye with this machine? Let’s find out in this full review of the Lenovo Legion 5 laptop. 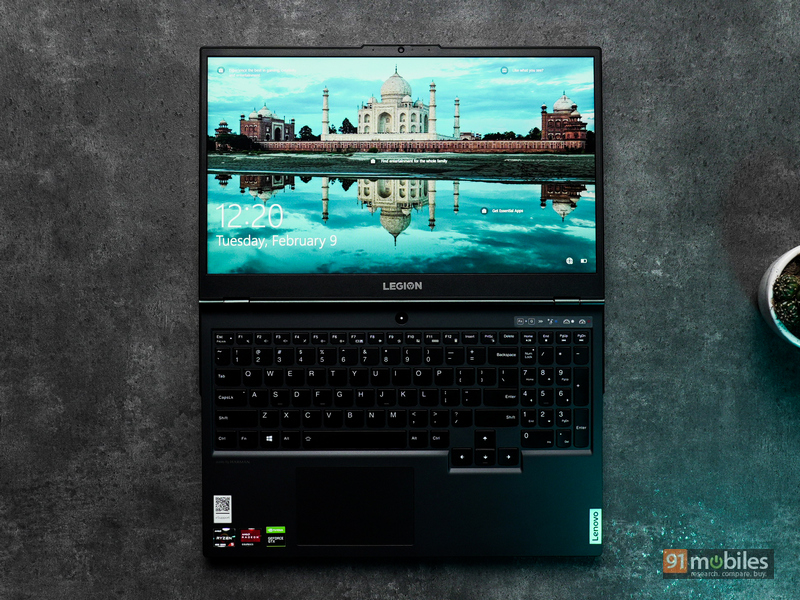 Much like the Legion 5i, the Legion 5 also features a reasonably lightweight chassis which can be accredited to the unit’s plastic construction. In fact, at 2.3kg, the laptop won’t burden your shoulders and is relatively sleek too, so you should be able to stow it away in your backpack without worrying about it taking too much space either. What’s more, despite the use of plastic, there’s nominal flex around the edges and the centre of the unit, and on the whole, the Legion 5 feels quite robust. I should also add that the laptop features an ample palm rest below the keyboard deck, but the edges are a tad sharp and can bite into your wrist if used for an extended period. On the positive side, Lenovo offers a robust hinge with the Legion 5 that allows the panel to articulate up by 180 degrees. You can even open the lid with just one hand, which is great. 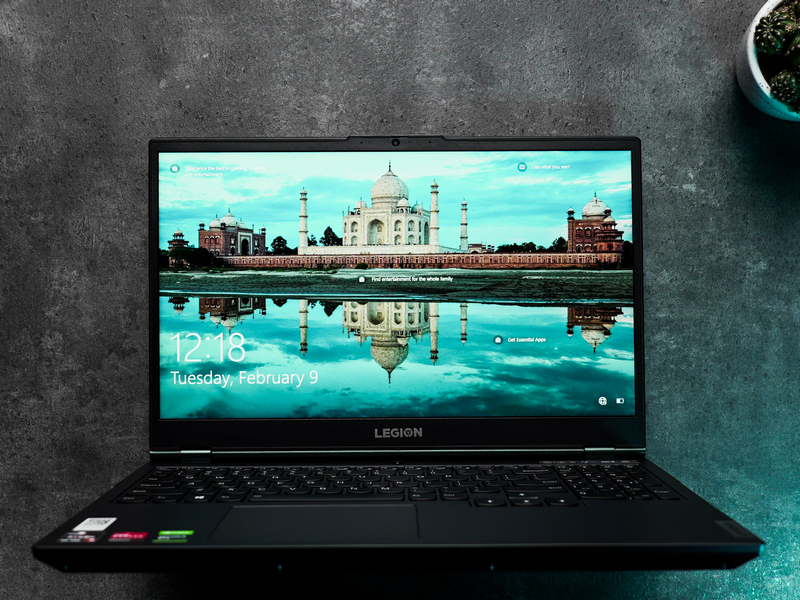 Inexplicably, the laptop’s colour scheme is called Phantom Black. At most, you can call it a deep grey and the only thing ‘black’ about the entire setup are the keycaps. Lenovo branding is present below the keyboard and on the bottom left of the lid while the Legion logo is plastered across the lid’s top right. As for the rest of the I/O, the power button resides just above the keyboard while the Harman Kardon stereo speakers are positioned underneath, on either side of the machine. The Legion 5 also comes with a webcam, which has been positioned on the top bezel. Interestingly, Lenovo has also furnished a privacy shutter with the webcam and you can just slide it over the camera whenever it’s not in use. Much to my dismay, the Legion 5 lacks any kind of biometric authentication, and therefore, you will have to rely on alpha-numeric passwords to secure the unit. 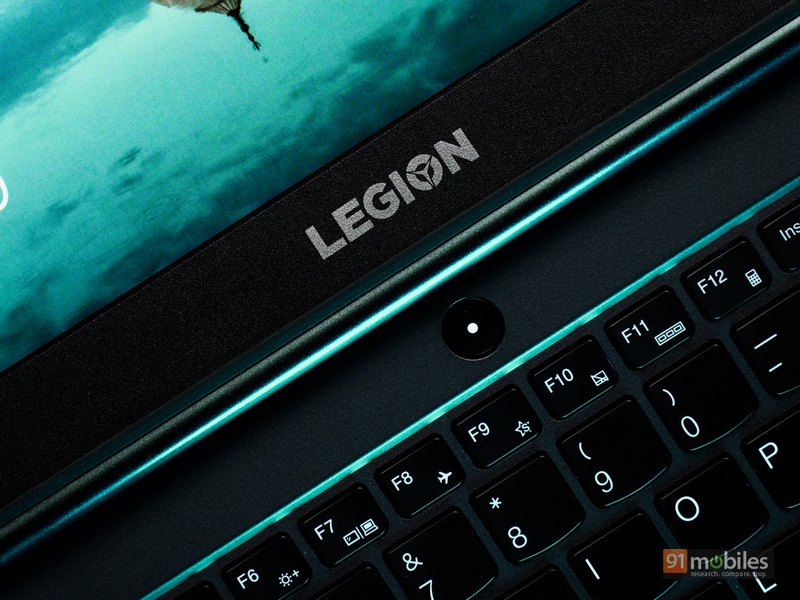 On the flip side, the port selection on the Legion 5 is quite healthy and appropriate for an entry-level gaming laptop. On the back, there are two USB 3.2 ports, one USB Type-C port with DisplayPort capabilities, an HDMI 2.0 port, an ethernet socket, and the AC Power port. The left side of the machine has another USB 3.2 port along with a 3.5mm headphone jack while on the right, there is yet another USB 3.2 port. Essentially the placement of ports on the back makes it easy for cables not to get entangled. For wireless connectivity, you get Bluetooth 5.0 and Wi-Fi 6 support. 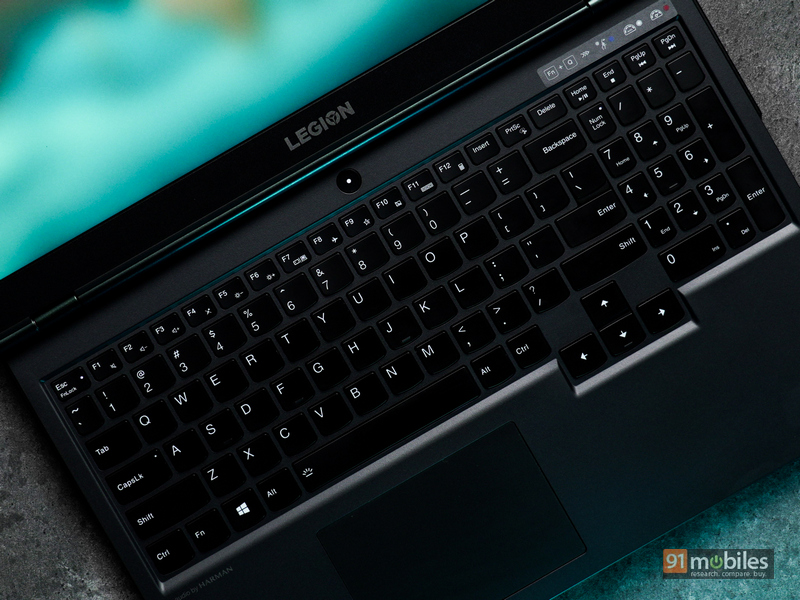 The Legion 5 has a 15.6-inch FHD (1,920×1,080) LCD panel with a 120Hz refresh rate, all of which is ported over from the Legion 5i.  The refresh rate is maintained constantly throughout normal tasks such as browsing and navigation for a smoother experience. Lenovo is claiming a 100 percent colour accurate display and in my usage, I did find the panel to be bright, punchy, with decently nice colours. Brightness levels are not that great at 250nits and I had a hard time using it under sunny conditions even with the Anti-glare coating. However, this being a gaming machine, its usage outdoors would be very limited. The bezels around the panel are quite slim, save for the bottom which does amplify the screen real estate in a smaller footprint. 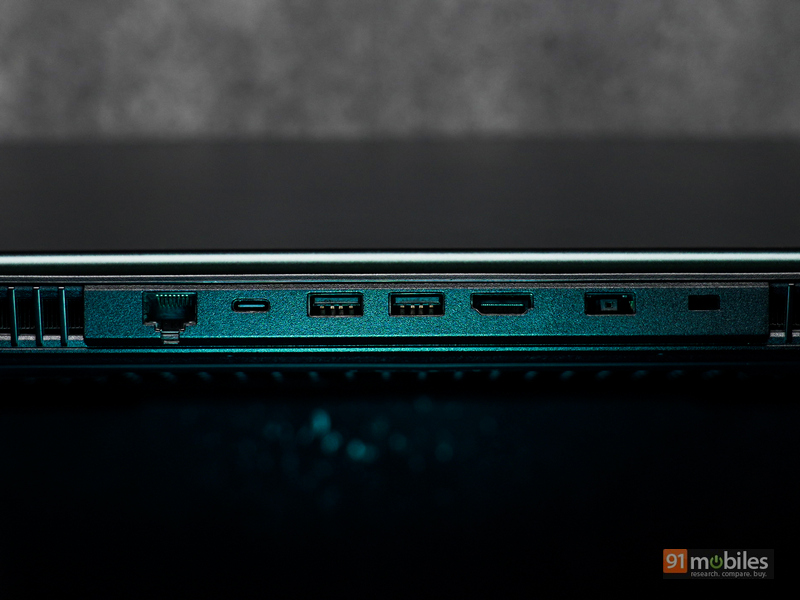 Having used the Legion 7i’s (review) keyboard, I was pretty much expecting a similar setup on the Legion 5 as well. Dubbed the TrueStrike keyboard, the unit offers a good typing experience thanks to its optimum key travel of 1.5mm. The chiclet-style keyboard remains mostly silent too unless you are typing furiously. You get a full-size layout with a dedicated Numpad, which should come in handy whenever you want to dabble with excel sheets. Lastly, the keyboard ships with a white backlight that offers two levels of illumination. You also get a similarly sized trackpad as I had seen on the Legion 7i. While the area is not that massive, the sensitivity, responsiveness, and multi-finger support are quite good, thanks to Microsoft’s Precision drivers. 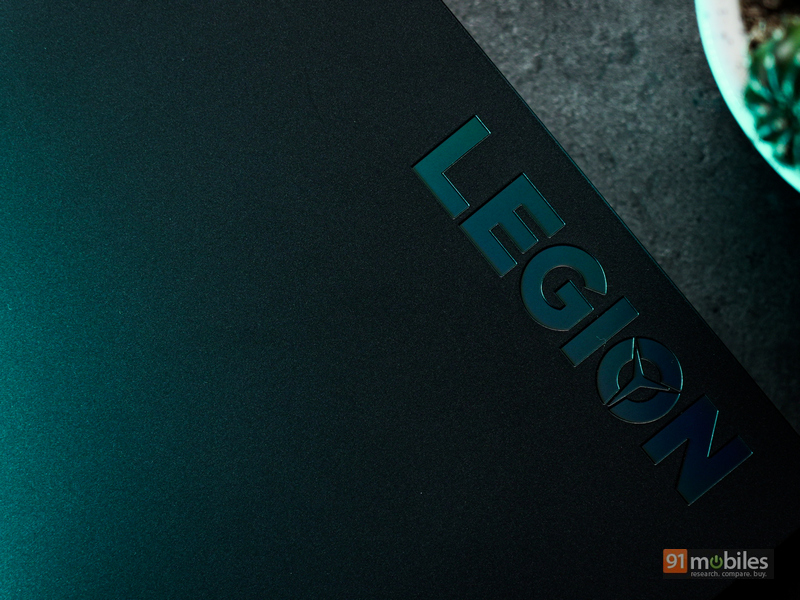 For the past year, it has become increasingly obvious that AMD is gaining a lot of momentum in the PC world and Intel should really be worried. The Legion 5 is powered by the Hexa-core, 12-thread, Ryzen 4600H processor which is made using 7nm fabrication and offers a maximum clock speed of 4GHz. Compared to an equivalent Intel Core i5-10300H CPU, which coincidentally, increases the SKU’s MRP, the 4600H is a winner in nearly every benchmark category. For instance, in Geekbench 5, the device yielded single-core and multi-core scores of 1,095 and 5,172 points respectively. Cinebench R23’s continuous test load returned single-core and multi-core scores of 1,162 and 8,512. To give you an idea of the 4600H’s compute prowess, the i5-10300H toting Dell G5 (review) I had reviewed earlier logged 1,035 and 5,267 points respectively. On PCMark 10’s test that shows how good of a workhorse your laptop is, the Legion 5 returned a score of 5,317, which is again higher than the G5’s 4,300. Other hardware features on the device include 8GB of DDR4 RAM along with 256GB PCIe SSD and 1TB of HDD. The SSD onboard the Legion 5 is plenty fast and in CrystalDiskMark, the unit put forth speeds totaling to 3,493MB/s and 1,500MB/s for sequential read and write tests. Suffice it to say, the laptop chewed through my workflow which involves keeping a ton of Chrome tabs open and switching between Microsoft Office suite of apps. I faced next to no problems with the Legion 5i’s performance. Even if I were to push the CPU a bit more, I am positive that the Legion 5 could’ve handled it. 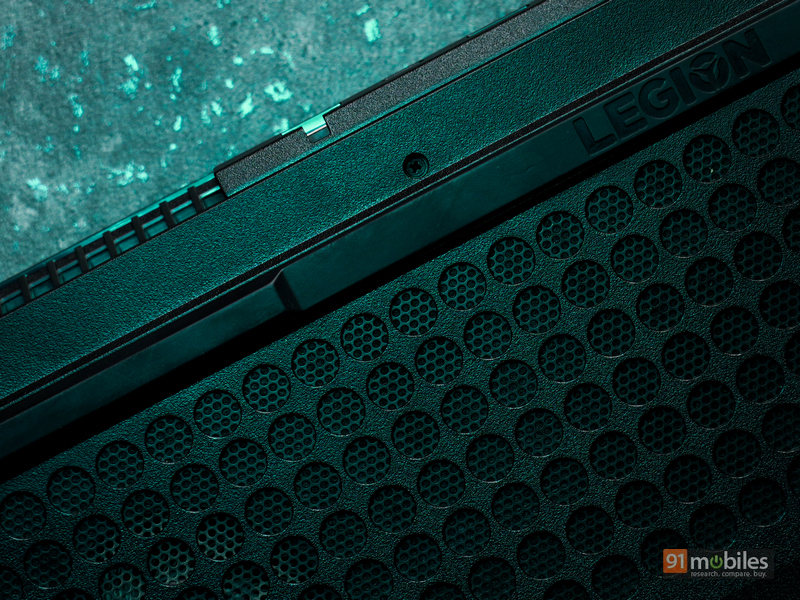 NVIDIA GTX 1650ti discreet graphics with 4GB of VRAM take care of the graphics. Now, this GPU isn’t really going to provide you with a next-level experience, but it is enough for gaining entry into the world of gaming, especially since the graphics performance is reasonably good for the price. 3DMark’s Time Spy test finds out exactly how capable the laptop’s graphical handling is. The Legion 5 got a score of 3,997 which is just slightly higher than the G5’s 3,770 and it uses the same 1650ti. Apart from that Unigine’s Superposition benchmark also gave quite a good result of 1,893. Benchmarks aside, the laptop runs quite cool even during intensive gaming sessions. Shadow of the Tomb Raider at High graphics settings was spitting out a constant 57fps while Far Cry 5 at the same settings was giving a constant 60fps. Similarly on Call of Duty Warzone the frame rate was constantly between 75-90fps. I even played Cyberpunk 2077 on the laptop and managed to get about 30fps while on High graphic settings. The Harmon Kardon stereo speaker setup on the sides has also got me impressed. The sound has a lot of depth to it, and the vocals are quite crisp. I wouldn’t call it the loudest set of speakers on a laptop but the sound output has a lot of clarity. The webcam quality is not something to write home about but it will get you through your Zoom/Teams video calls. Unfortunately, the lack of Windows Hello for either fingerprint or face authentication means that you can’t use biometrics to secure your laptop. 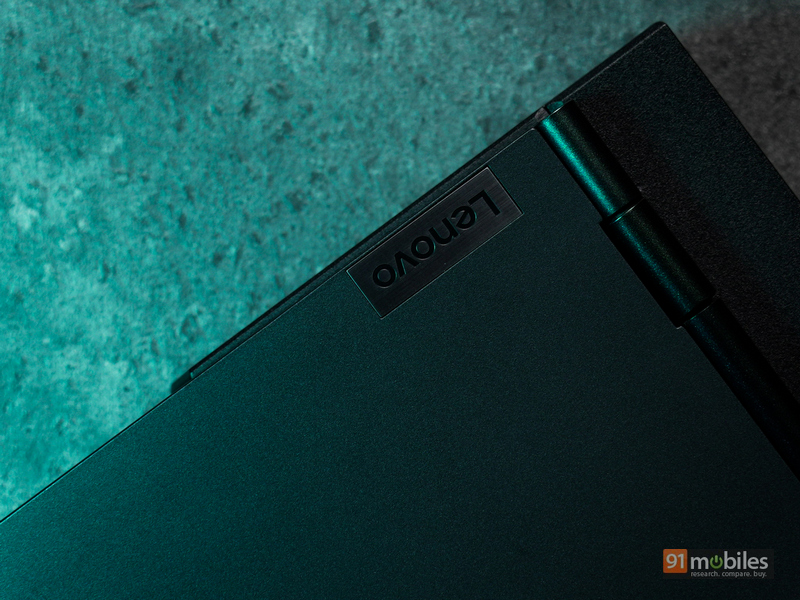 The Legion 5 houses a 60Whr battery which is decent for the usual productivity tasks like Chrome browsing and Microsoft Office usage. I was getting anywhere from 4 to 4.5 hours while working on battery. Of course, if you are doing some GPU intensive tasks then that time will be reduced to about 1.5 – 2 hours. While gaming, the best performance will be delivered when the device plugged into the 170W charger that comes with it. 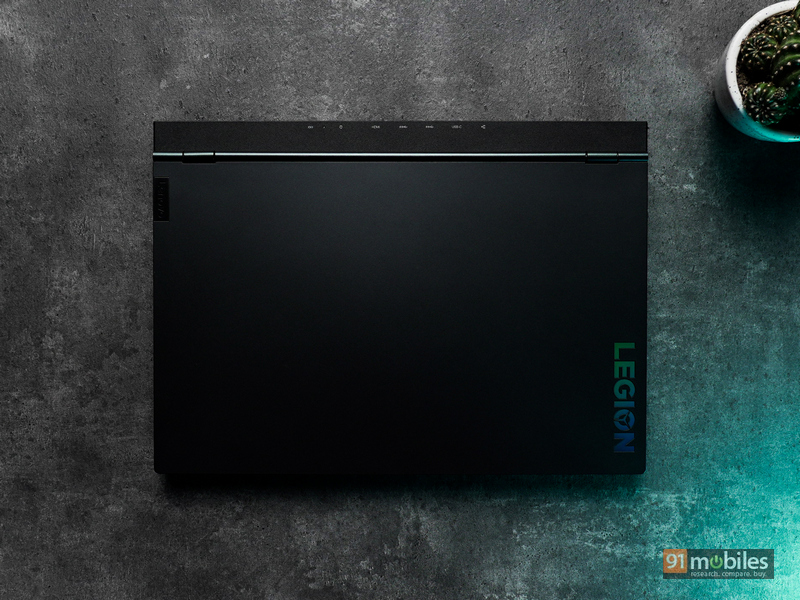 There would be very few laptops if any, that can compete with the kind of cost-to-benefit ratio provided by the Legion 5. It has an exceptionally good CPU and a capable GPU which should help with entry-level gaming. The overall clean design aesthetic should also appeal to users. The battery life is something that could have been better, but it will suffice for some quick work on the go. 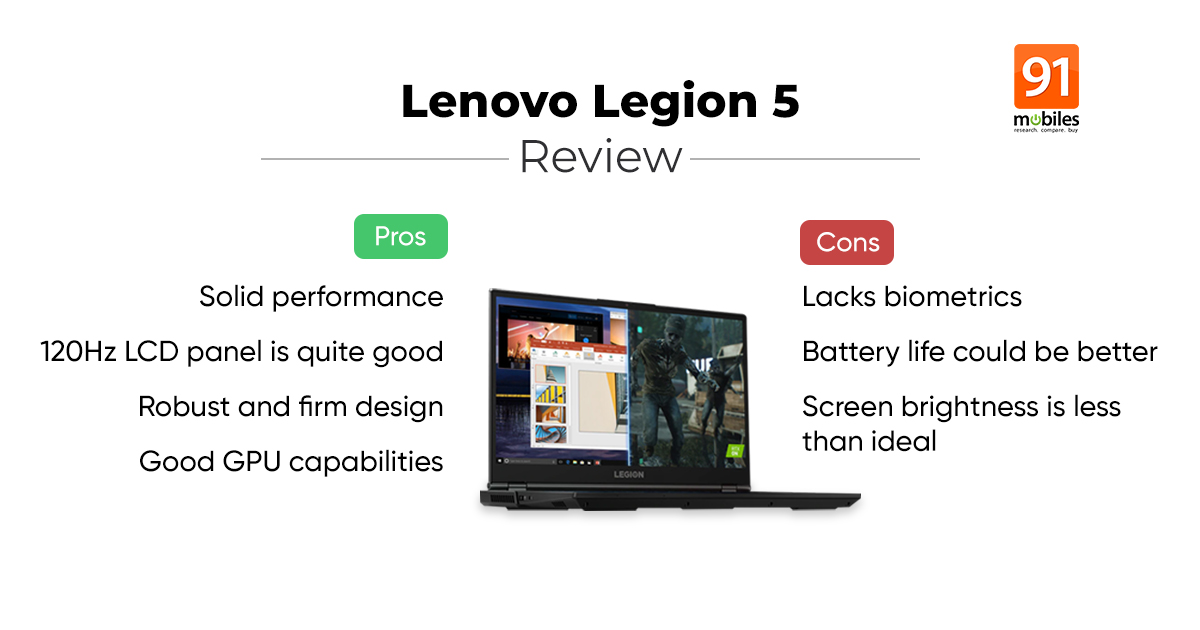 In any case, the Legion 5 has not been marketed as a battery champ but more as an efficient performer. In sum, there will be very few that can displace the Legion 5 from the top of the affordable gaming pedestal.

[Exclusive] Will the Motorola “Bronco” double as a Lenovo ThinkPhone?